After ten levels of play, the remaining players could be seen slowly exiting the tournament hall, visibly drained after 12 hours of poker today.

Here’s a short recap of the action up to this point: Exactly half of the total entries today were already seated when the tournament kicked off at 12:00pm. The players set a slow pace befitting a 5-day tournament of this caliber. The ratio between the 1,000,000 starting stack and the initial blinds was also conductive to a more leisurely rhythm of play.

As expected, the field was full of international as well as local players.  Early on, Mark Mckee, from Ontario, and Czech Ondrej Drozd, made the first leaderboard with almost 2½ the average stack.  A couple of hours later, it was Australian Tristan Bain and Canadian Rick Beer that took hold of the top positions with approximately 3.4 million chips each.  By the time the players took a long and welcome dinner break, the tides had shifted somewhat and new leaders emerged.  Of the 230 players left, Beer and Bain were still in the top ten, and still neck to neck, but they had dropped down a few spots. Three Canadians now topped the leaderboard.  It was now Babak Forozandeh and Danick Landriault’s turn at the helm, both players a few hundred thousand chips from five million.  At this time, Ami Alibay was starting to gain some serious ground as well, sitting on 4,29 million chips. At the last break, Austrians Armin Rezaei and Gerald Karlic both came out of nowhere to claim the lead with 5,600,000 and 4,965,000 chips respectively.

The shift in chips were pretty modest on average, and very few huge pots were disputed in the last hours of play.  When the last two levels came around, there was a small but perceptible surge in the eliminations. This small rise in activity was easily explained by the smaller stacks making an attempt at doubling up or going home in the last sprint to the finish line.

After all was said and done, a total of 151 players, almost half the field, qualified for Day 2. Canadian Sandy Lam bagged the most chips tonight (6,840,000) and is closely followed by German Manig Loeser who dropped 6,620,000 chips in his bag.  Loeser is the only other player besides Sandy to have bagged more than 6 million chips tonight.  Armin Rezaei managed to slightly improve on his earlier count and finished with 5,790,000 chips, securing the third spot on the chip count list. The players will be back Thursday for Day 2, and will be joined by tomorrow’s qualifiers from Day 1B. To see the combined Day 1 results, click here.

Players have one other chance to get into the action of the Main Event, and that’s tomorrow, Wednesday May 22nd.  The action gets underway at 12:00pm for Day 1B.  The rest of this five day event will unfold as follows: 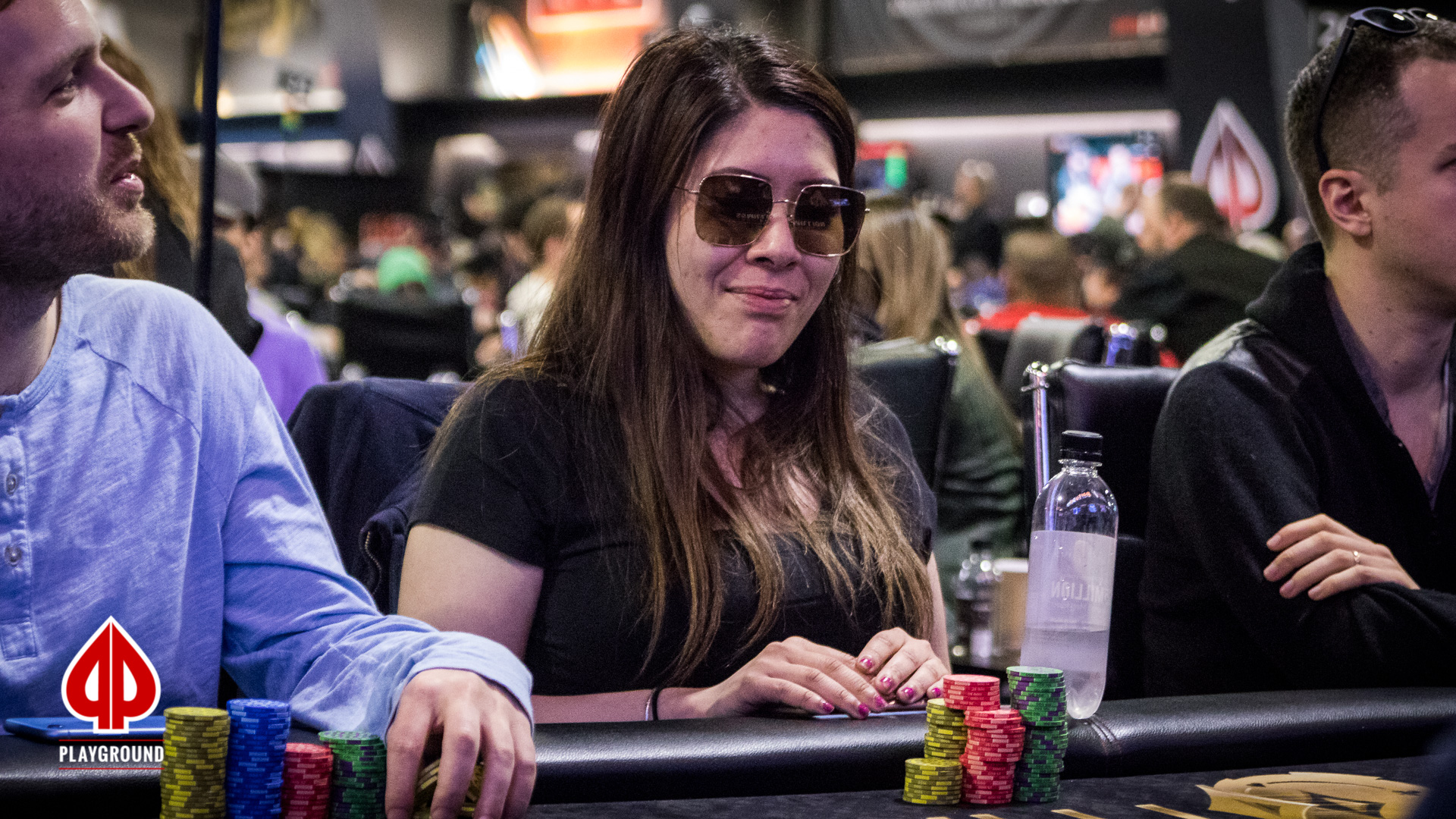 Precious cargo: taking no chances with the bagged chips. 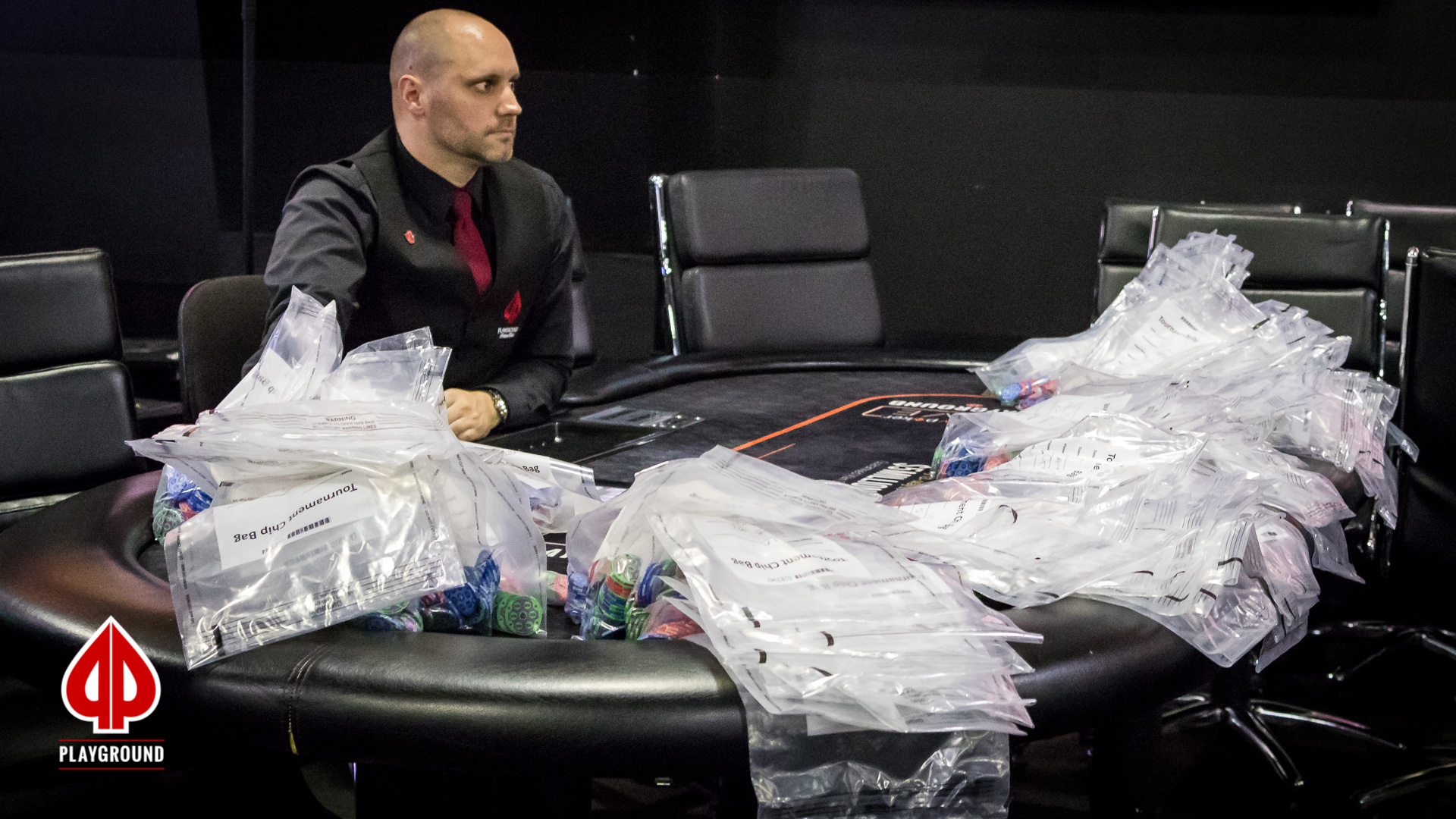 With only two levels left to play in this Day 1A flight of the Main Event, Armin Rezaei is in the current chip leader.  At the dinner break two hours ago, he was among the top ten chip holders of the tournament, so he’s obviously doing something right.

As the players return to their seats, the action resumes.  Some of the players are showing signs of fatigue, which is understandable after being riveted and focused on their game for the last 10 hours.  The wait is almost over, and the bags are going to come out soon for the Day 2 qualifiers. 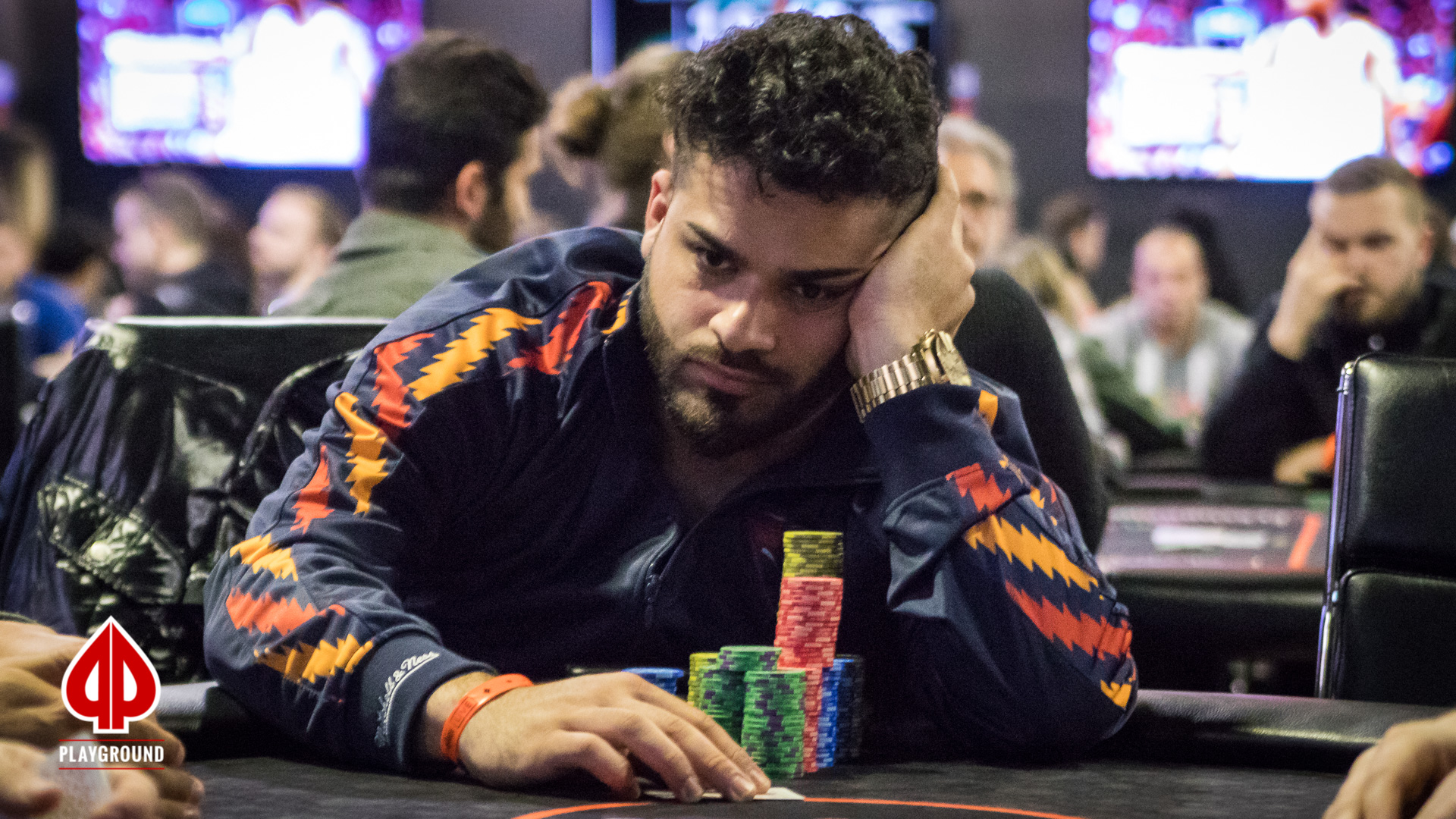 Day 1A has just entered the eighth level of play, and 206 players are still in the running.

As expected, play has remained fairly conservative since the dinner break. Those still in the field are managing their chips carefully, helped by the copious amount of caffeinated drinks and water being distributed by Playground’s waitresses, the players are still sharp after nearly nine hours in the tournament hall.

Here is a look at the field from level 7:

There will be a total of ten levels played today and we expect to see some intense action until the end of the flight. There are now 230 players left from today’s 304 entries. If tomorrow’s turnout is as good for Day 1B, look for the prize pool to escalate beyond it’s guarantee of $5,000,000.

Here are a few photos of the players in action:

The players are off enjoying their dinner break on Day 1A. After six levels of play 230 players remain in contention out of 304 entries. Play was predictably cautious in the early levels. Even with the many blinds at their disposal, the players set out for a marathon, not a sprint. But things have steadily picked up pace since the early levels. There was a flurry of bustouts in the lead up to the dinner break, however, things will likely tighten up again when play resumes as the players focus on closing out the flight and bagging for Day 2. The players will return to their seats in roughly 30 minutes to play through the final four levels of this flight. Those who fall short today will be able to get another crack at things tomorrow, thanks to this event’s next day re-entry format.

Here are the complete chips counts for the remaining players:

The players are returning to their seats after a short break. This also coincides with the end of late registrations. A total of 304 players made their way to the tables today, and 266 are still in.

Tristan Blain has taken up the pole position on the leaderboard, with 3,410,000 chips in front of him. Two other players have managed to stack up more than three million chips: Rick Beer stands at 3,345,000 chips and Danick Landriault with 3,250,000.

It’s been a nice turnout today for Day 1A of the Main Event, there are approximately 30 minutes left of late registration, the clock is showing 299 entries and 299,000,000 chips in play.

Players have until the beginning of level 5 to grab a piece of the action.

Here are a few photos of the players from levels 3 and 4:

Players continue to join the field at a steady rate on Day 1A of the Main Event. Those who were here for the first two levels of play, started out with a cautious pace. The stacks are very deep, as the chip average provides over 150 big blinds, and the players are managing them carefully. As everyone knows, you can’t win the tournament on a Day 1…

Here are some photos from the early levels:

The action is still going strong as the tournament slips into level 3 and with still more than two hours left for late registrations.

The 270 players took a short break between levels 2 and 3, which allowed us to do a quick survey to see where the chips are.

There is only 700,000 chips separating the eleven top chip holders.  A few players are off to a great start.  Topping off the list is Mark M with 2,480,000 chips, and Ondrej Drozd with a stack of 2,407,000.  It is still very early and anything can happen yet.  With almost two hours of late registration left, you can expect many  more players to fire a bullet today since some players prefer to get into the action after the first few levels have gone by. 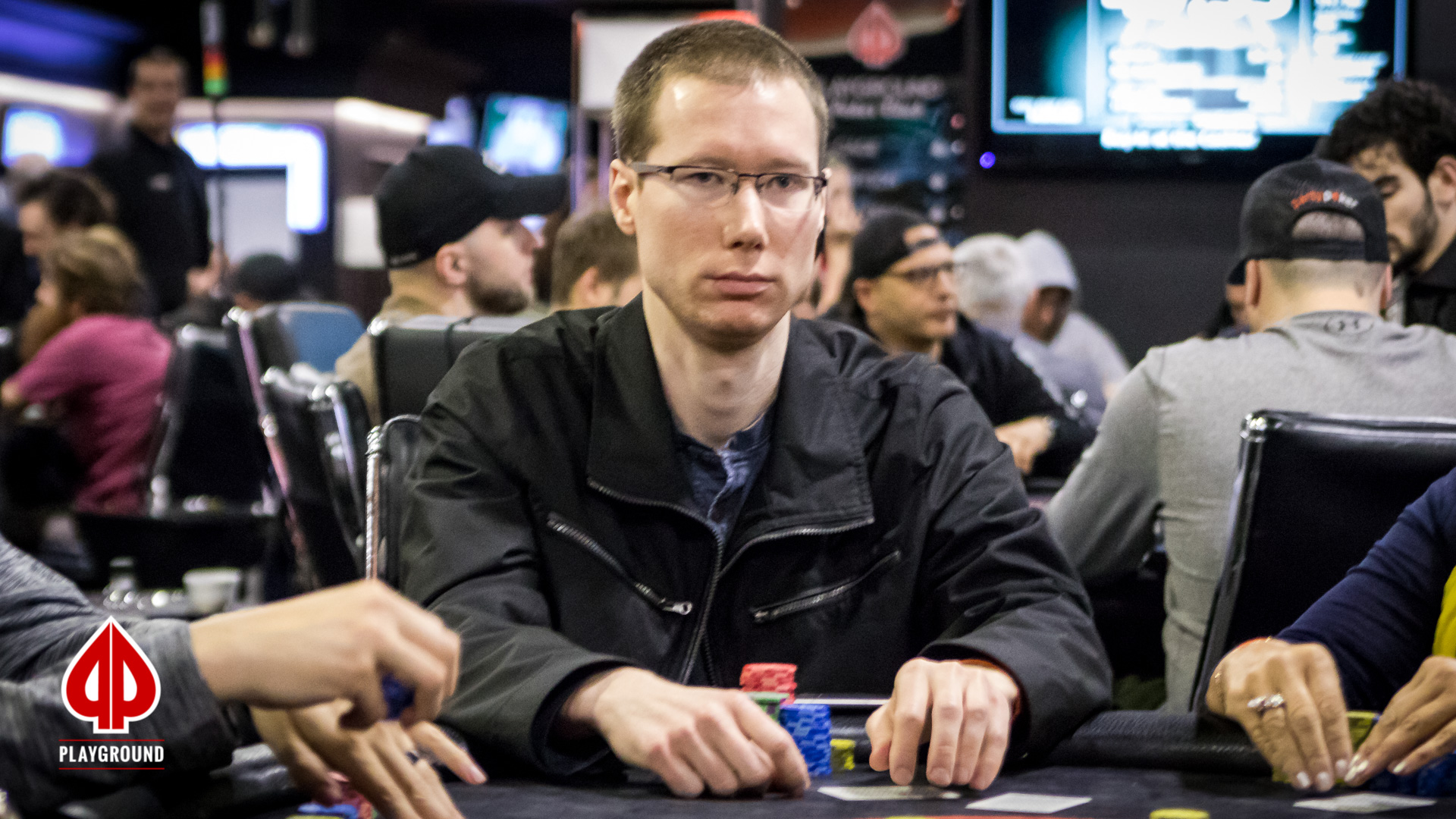 Among the 79 satellite qualifiers, a few local players can be seen at the tables, including our STEP qualifiers.  Several of them qualified as much as six months ago and were eager to get into the action today.

Among them are Christine Park, Carlo Nini, Marc Saddik, Jean-Philippe Lehoux, Ivan Driard, Eric Ranger and Carlo Nini.  Through Step Satellites, players could qualify for the Main Event for as little as $90, or through Playground’s monthly leaderboard.  Click here to see the video collection featuring them.

There are presently 233 entries and late registration will be open until the beginning of level 5, at approximately 4:30pm.  Remember that this is a next-day re-entry event with a single entry permitted until the end of the late registration period, on each Day 1.  A player may play Day 1B even if they have survived Day 1A with chips.  However, if a player survived Day 1A and chooses to play Day 1B, their qualified stack from Day 1A will be forfeited with no possibility of recovery.

This event boasts a $5,000,000 guaranteed prize pool and is undoubtedly the most anticipated of the events.  79 players qualified for the event through the many satellites that were held at Playground.  There were also 82 qualifiers online.  The tournament hall is buzzing with excitement as the players slowly get to their seats.

Here is the schedule for this event:

Like the man just said: “Dealers, shuffle-up and deal!” 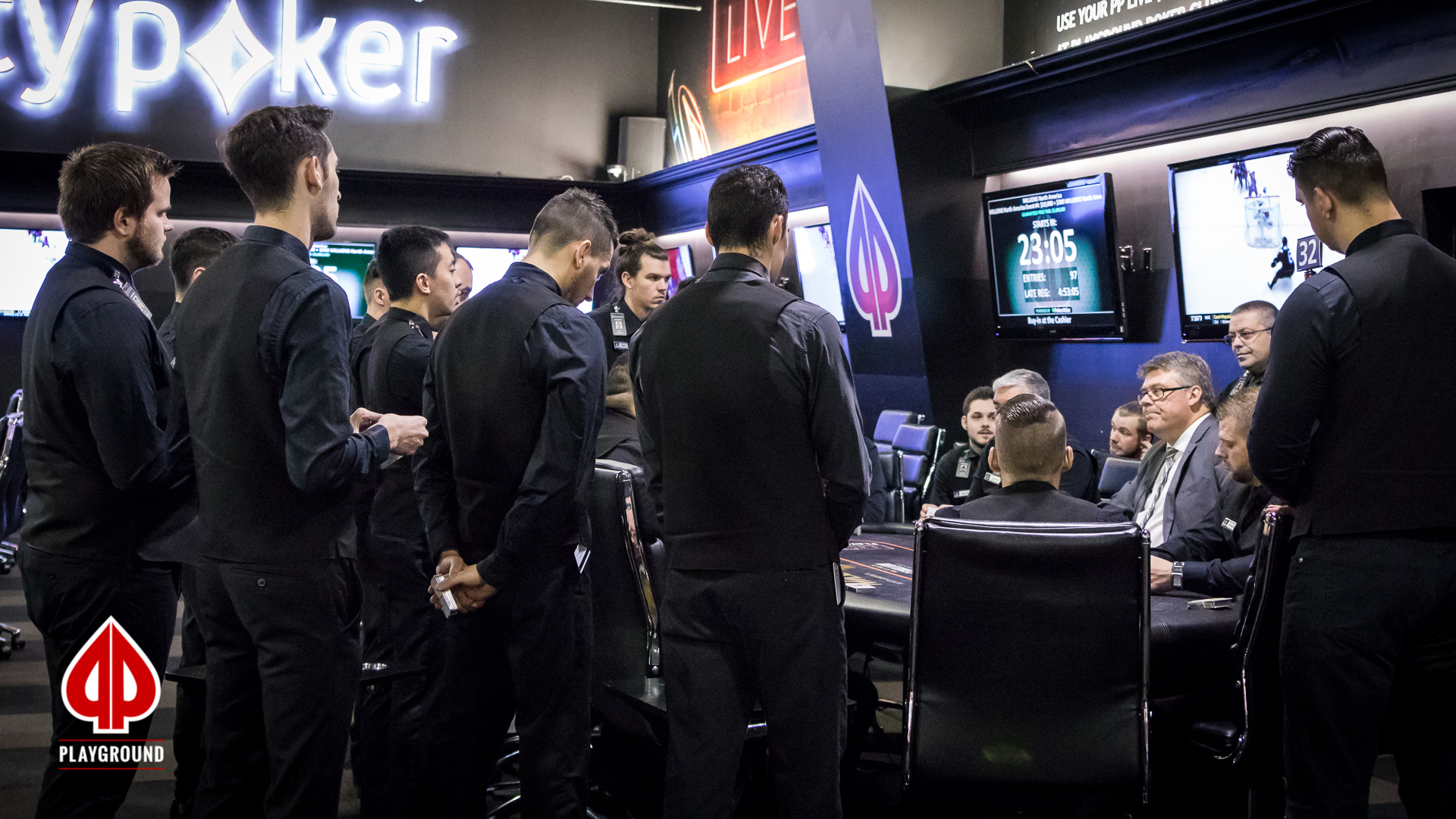