The chip lead changed hands many times throughout the day; by the time the final table was formed, a friendly spirit developed between the nine players who were battling for the top spot.

One player, however, stood out from the rest thanks to his very colourful presence; Thomas Cemm of Mission, British Columbia, was in great spirits all day long. He came to Playground to have fun at the poker table, something that nobody could stop him from doing, that was for sure. He kept players laughing while carrying himself with a true happy-go-lucky spirit, all the while being a gentleman, which is always good for the game.

The heads-up battle for the trophy came down to Cemm and Matthew Wilkins, an experienced tournament grinder who has made many deep runs in Playground events. Wilkins worked hard to try to capture the title, but Cemm was fearless and tenacious. Cemm caught some key hands and began to chip up, eventually taking over the lead.

to put Cemm in the lead after hitting his Ace. The turn brought the

changed nothing and the 8-Max had its champion, Thomas Cemm! 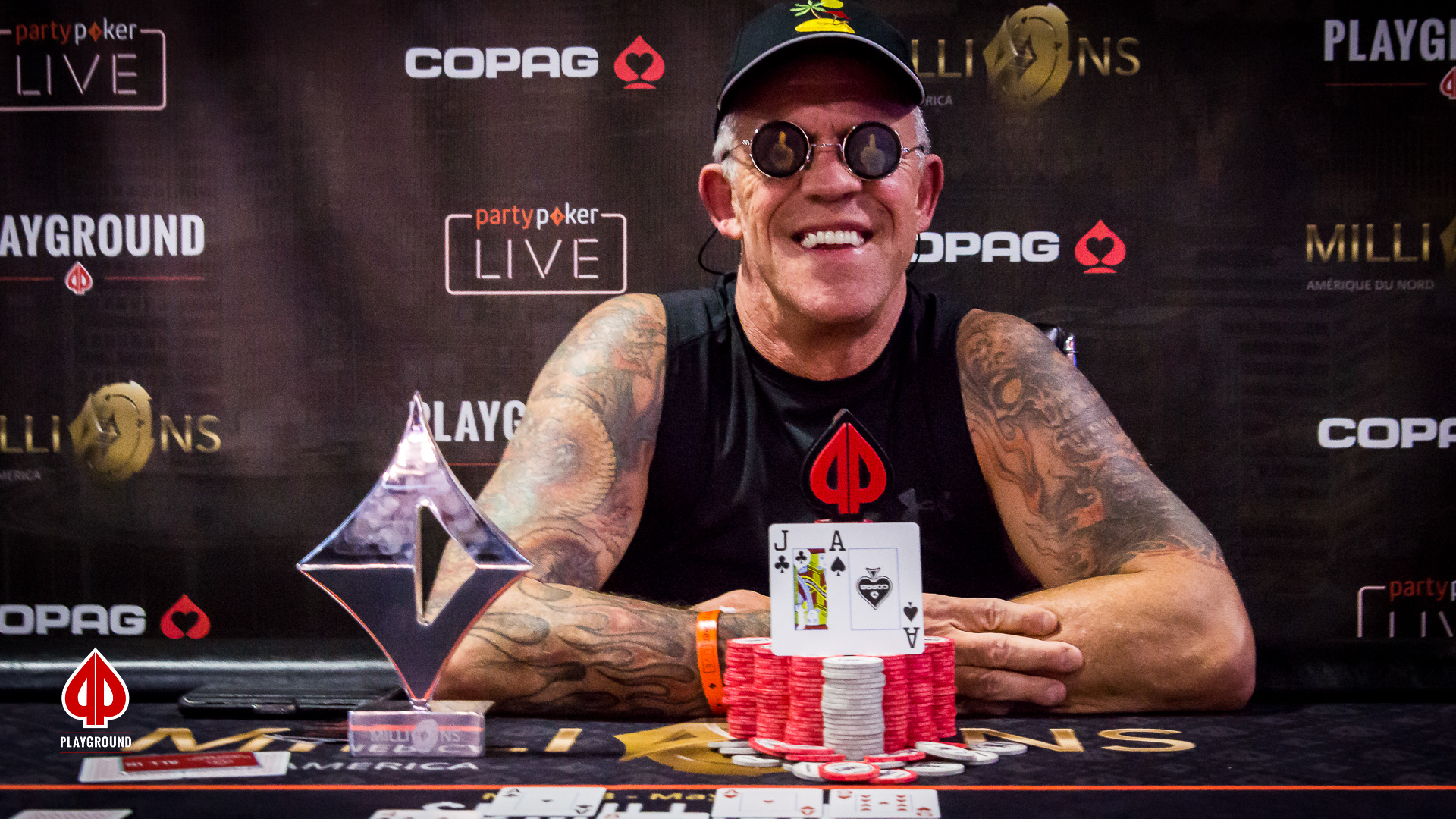 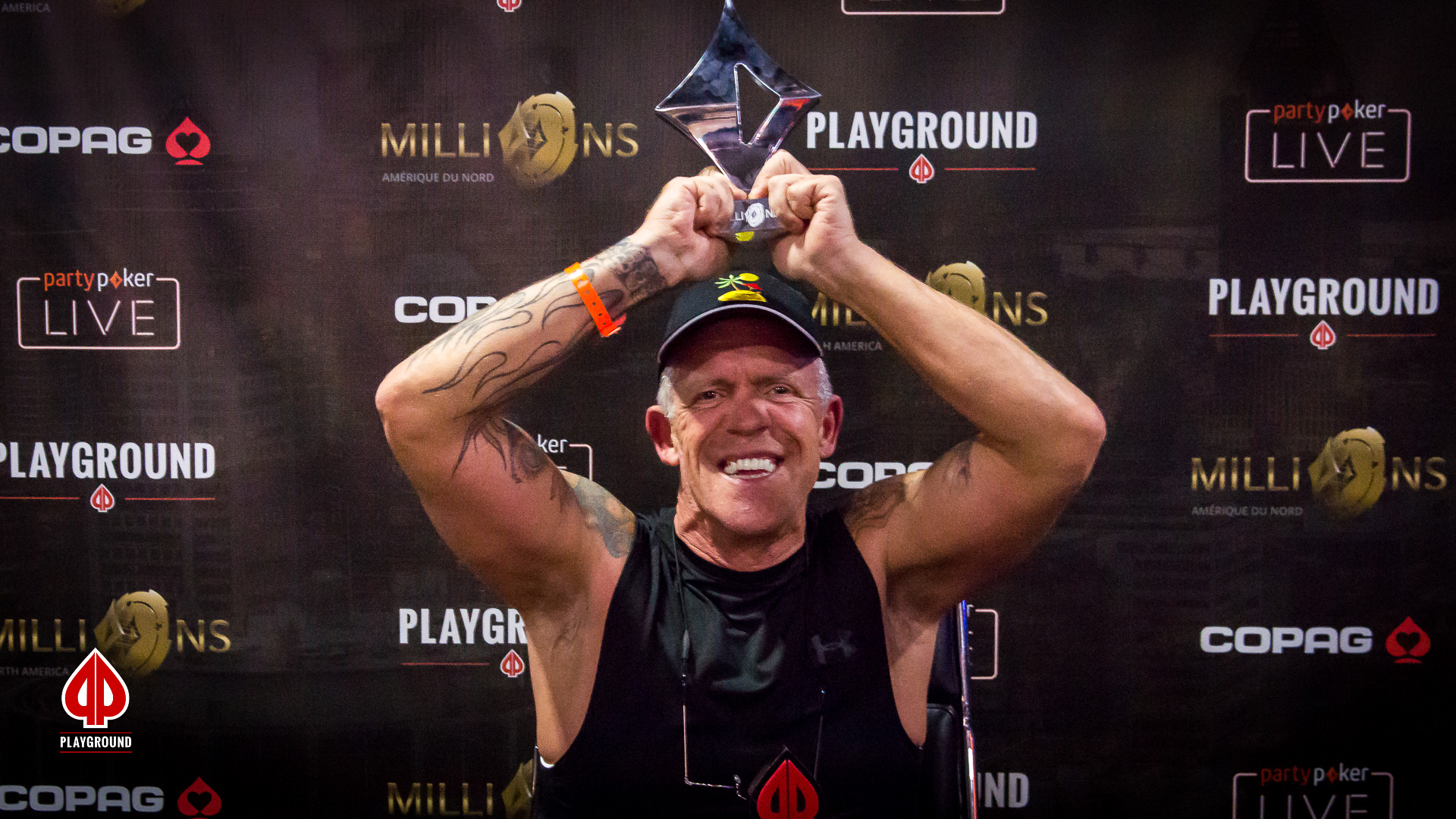 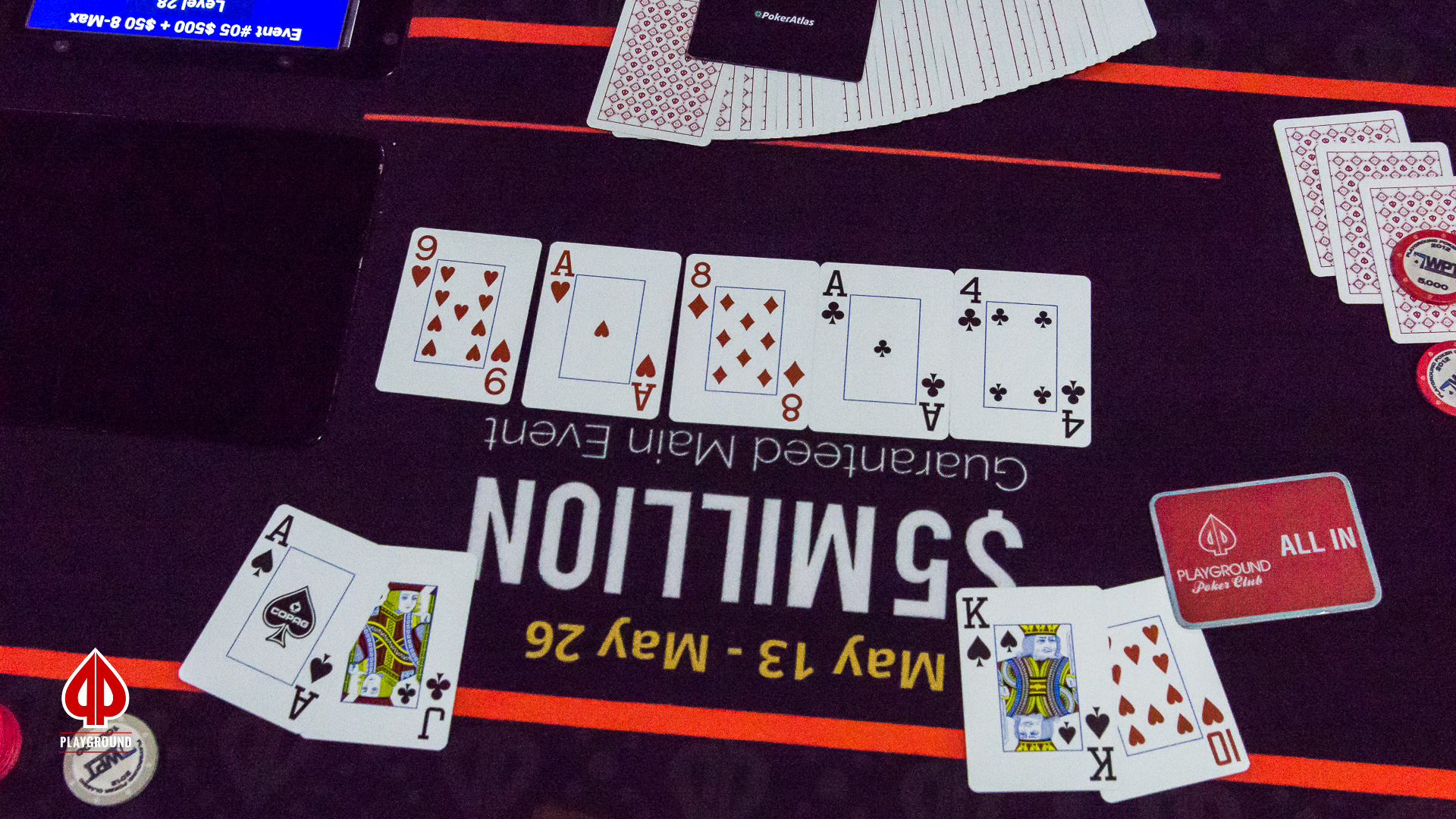 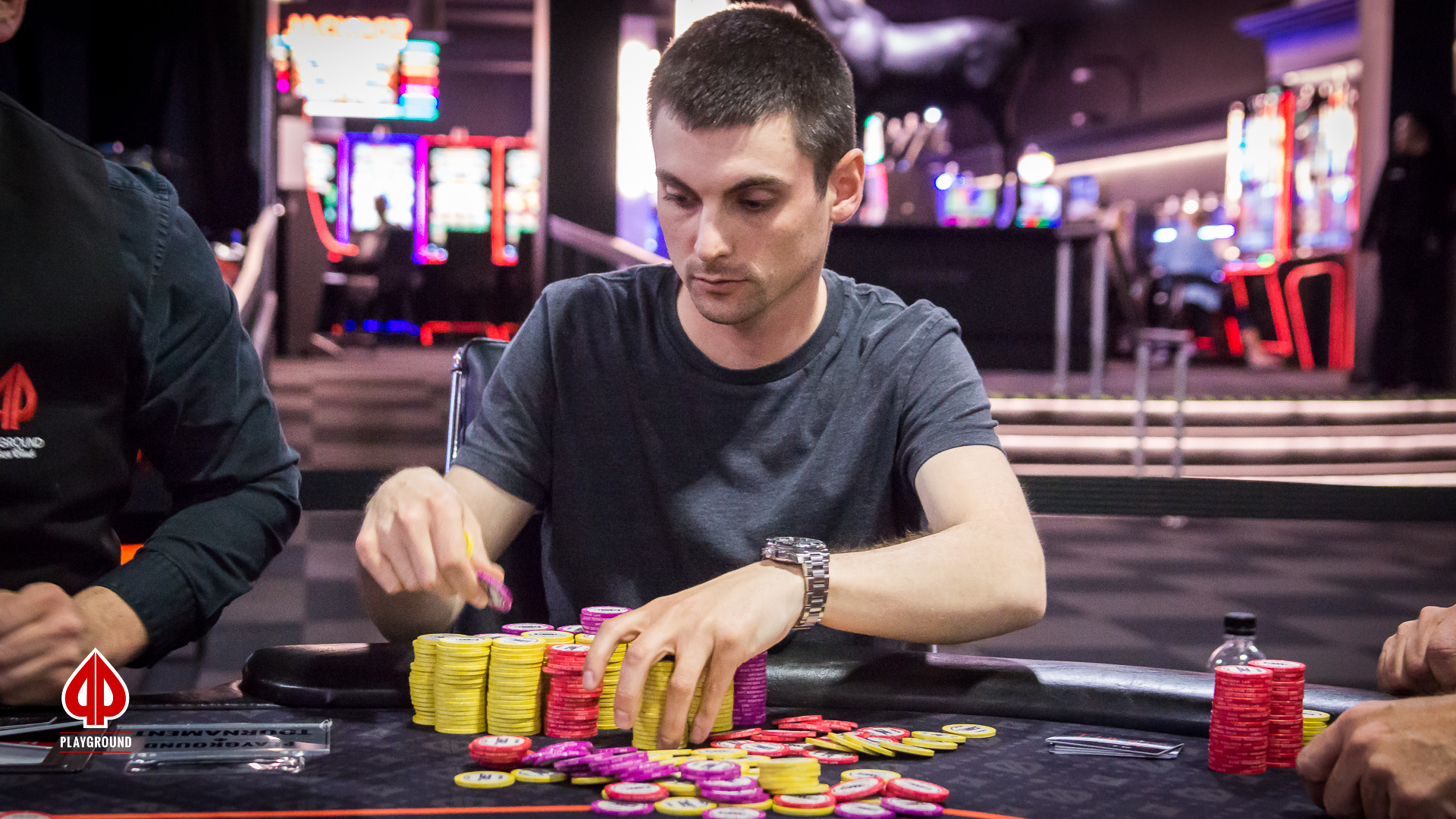 The players just went on break so we had a chance to count the stacks.

After the break, the pressure on the two smaller stacks was just too much and both players ended up hitting the rail.

Mehdi Badreddine was the next go, exiting in fourth place for $5,630. James Bridgeman followed in third place and collected $7,830 for his efforts.

James Cemm and Matthew Wilkins are now playing heads up for the first place money ($16,830) and the trophy and the bragging rights. Wilkins has a chip advantage over Cemm, so it will be interesting to see how this pans out. 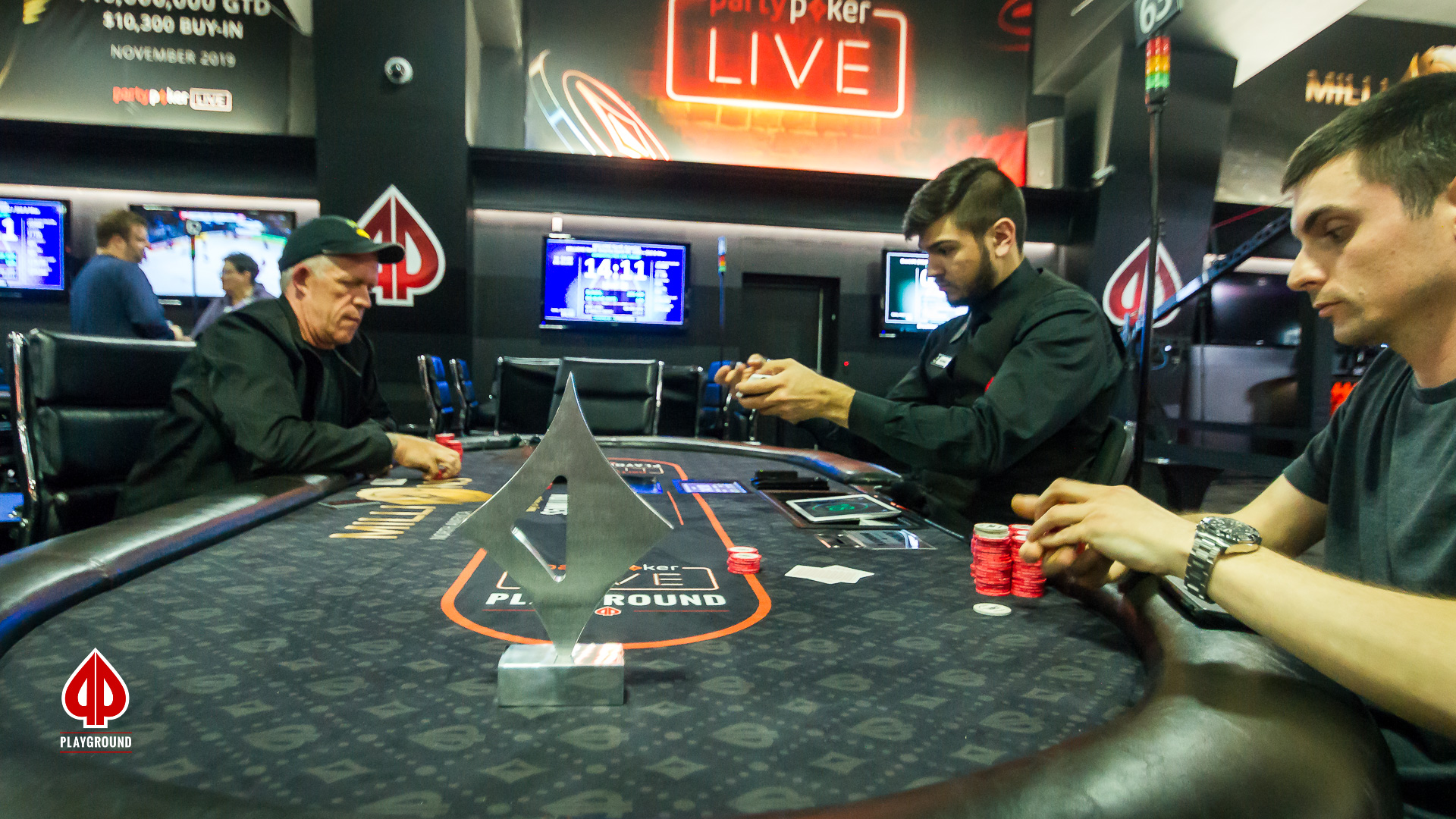 Matthew White was the next to leave the final table, finishing in fifth spot for $4,160.

After Matthew exited the room, the remaining four players decided to look at the ICM chip chop numbers and the tournament staff paused the clock to count the stacks and enter the numbers into the ICM calculator. With still a total of $41,500 remaining in the prize pool, the players were informed that $4,150 (10%) would have to be left in reserve for the eventual first place winner.

Here are the chip counts and the ICM payouts as per the counts (leaving another $4,150 for the first place winner):

There was talk back and forth, but Matthew Wilkins was hesitating and asked the others to give him a minute or two as he was texting a friend to discuss the situation. He finally said to the others that he would do a deal so long as he received $9,000 instead of $8,360.

Thomas Cemm, who was in good spirits, and who had a commanding lead, offered to give up $260, but no more. The others weren’t so keen on offering any extra to Wilkins, especially since he was fourth place in chips.

In the end, the four players decided to simply play on.

Albert Nguyen is a local regular player who enjoys playing the events at Playground. He has good skill and is not afraid to play hands and to make moves.

He started the final table in the middle of the pack, and watched his stack take a hit or two as play moved on. James Bridgeman opened and Albert looked down at his hole cards and moved all in for 526,000, and was called by Bridgeman. Albert had 88, and Bridgeman had the Big Slick (AK).

, and Bridgeman took almost all of Nguyen’s stack. Nguyen busted on the next hand in 6th place and collected $3,130 for his afternoon of tournament poker. 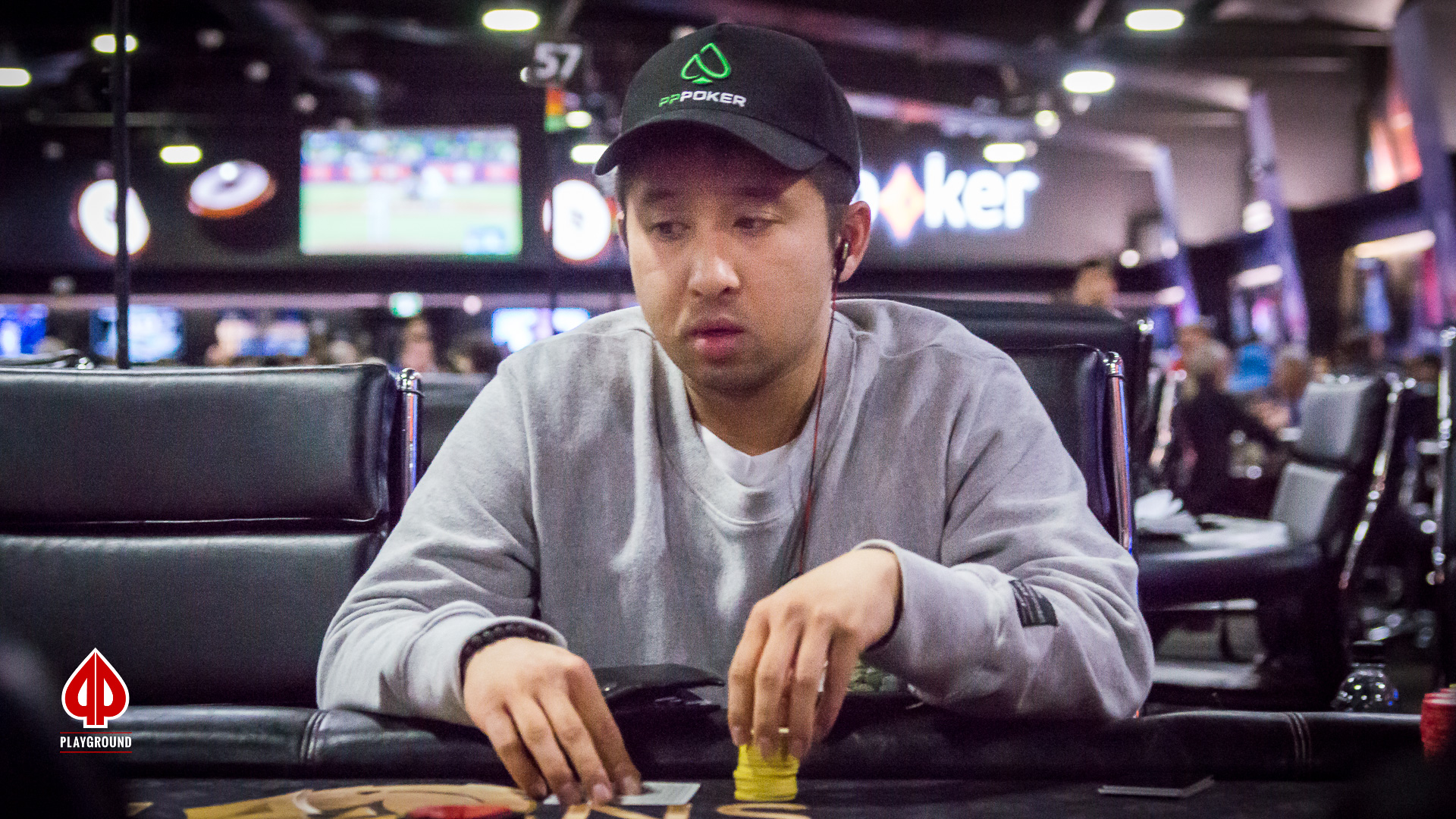 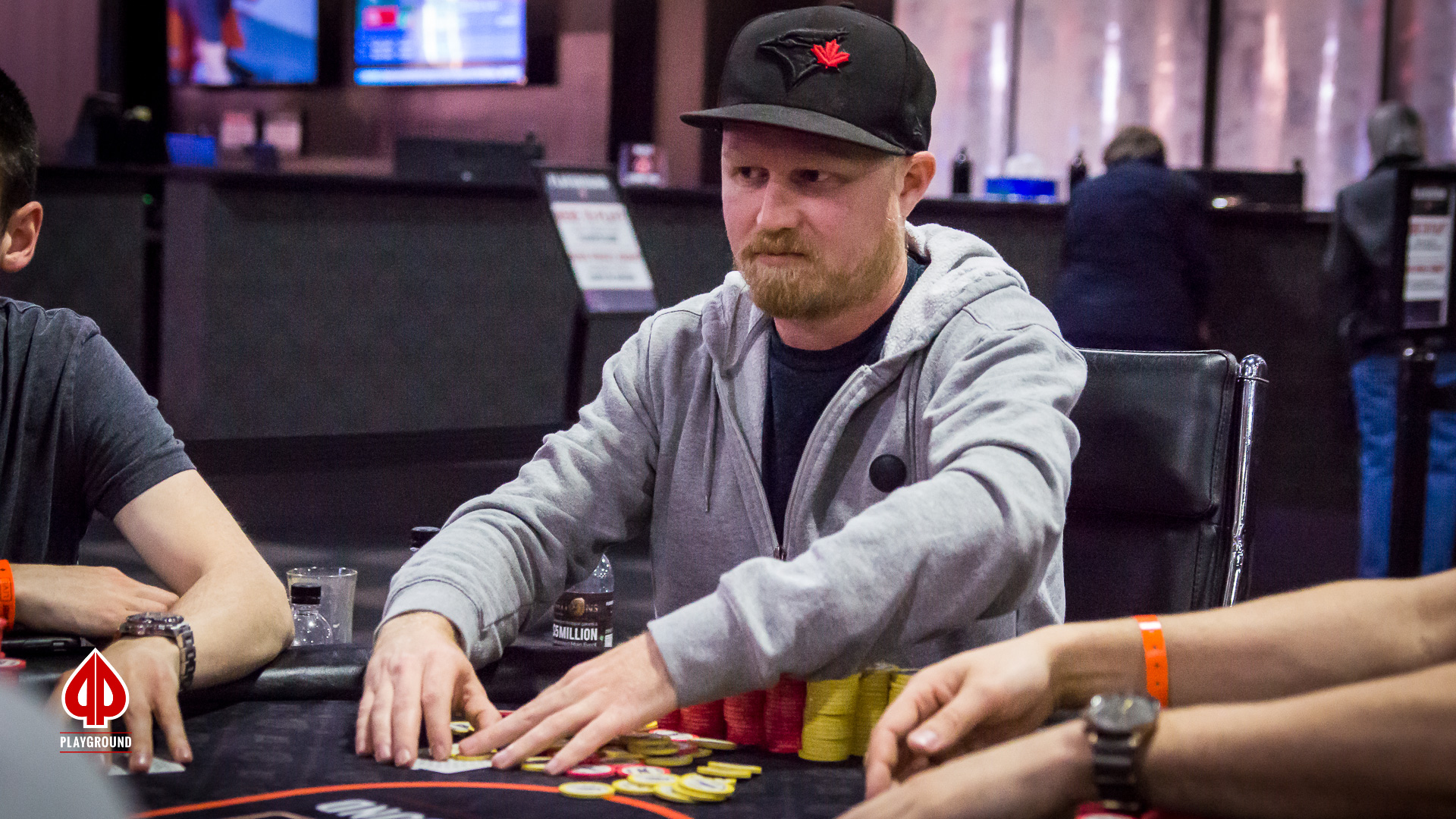 Just before the final table was formed they lost Jimmy Setna, exiting in 9th place for $1,680.

There are a few big stacks on the table as well as a few shortys, so, we may see some fast eliminations.  Mehdi Badreddine has the top stack, sitting on 760,000.

Jean-Philippe Lehoux from Quebec City is one of the handful of players who qualified for the $10,000+$300 MILLIONS North America for only $95 by playing the Step 1-2-3 satellites earlier this year here at Playground. He played Day 1A of the MILLIONS yesterday and made it up to 2,300,000 chips, but had a few coolers late in the day however he still managed to bag 650,000 chips to move on to Day 2.

Being one of the many players who is in love with the game and who is here to play, he decided to jump into today’s $500+$50 8-Max tournament to see if he can add some cash to his bankroll before continuing on with Day 2 in the MILLIONS tomorrow. After starting to blind down, he finally picked up a decent hand and decided to put his chips in. Thomas Cemm, from Maple Ridge, BC, a colourful individual who has a great spirit, made the call.

and Thomas Cemm hit a set. On the turn

he made a boat, and with the river

, Cemm sent Lehoux to the rail.

As there are now only nine players left in play, the final table has been formed as TDA rules dictate it will play nine handed in an 8-Max event. 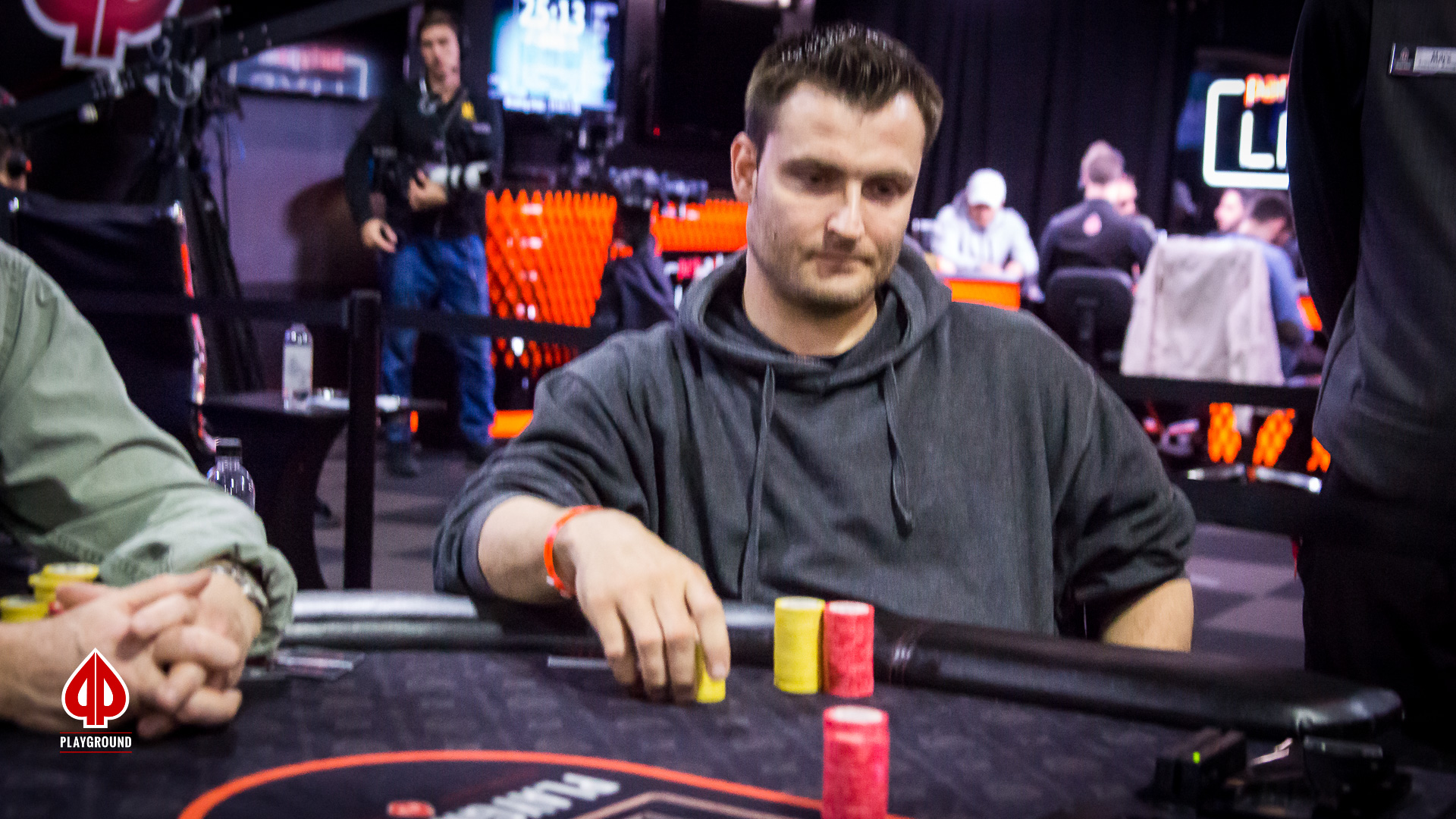 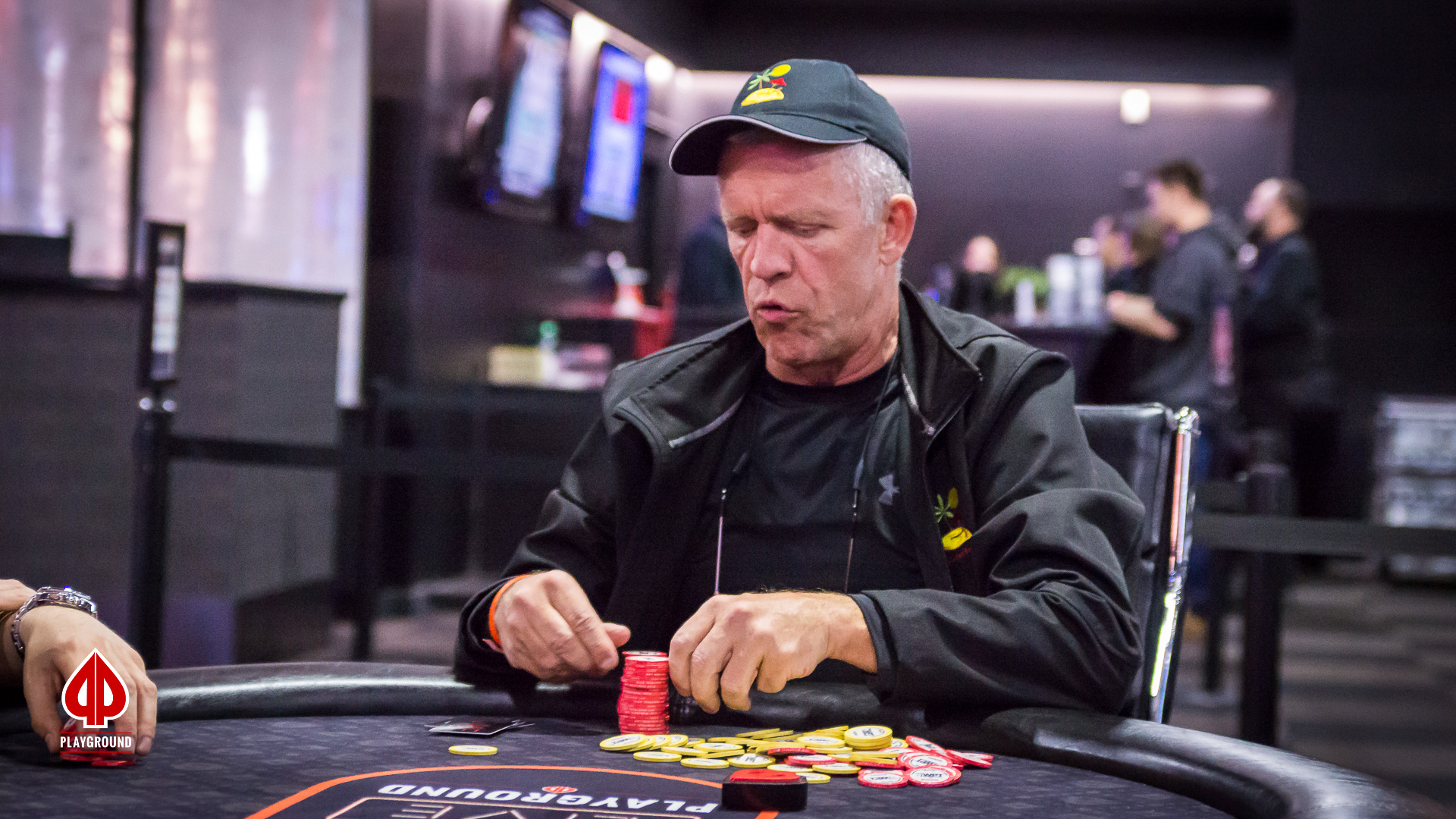 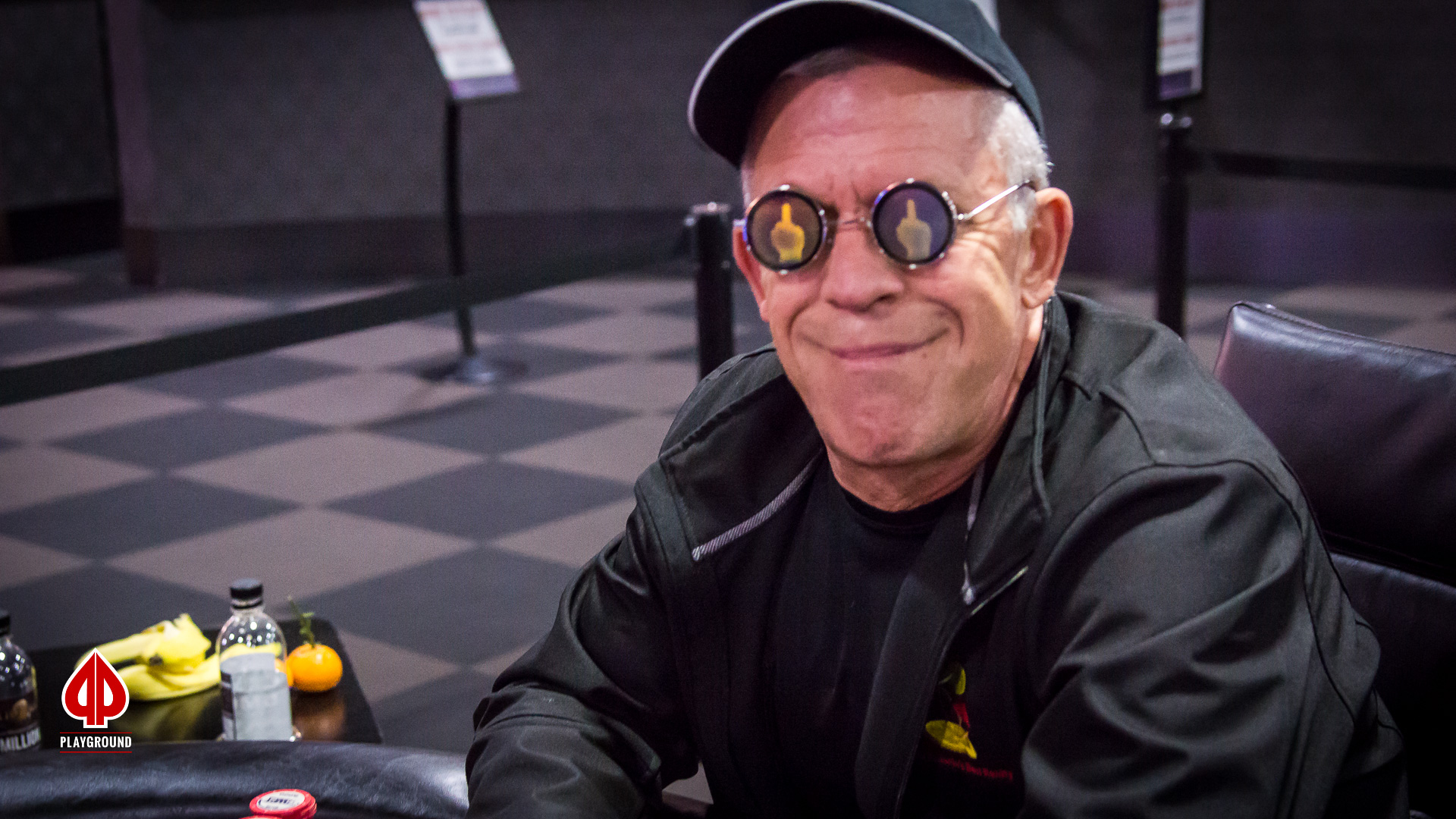 Daune Fernandez is a solid tournament player from Ontario that shows up on a regular basis for Playground events. When he picked up an Ace (A8), he moved his chips forward to signal an all in. Matthew Wilkins made the call with

, giving Wilkins a set and Fernandez was pretty much drawing dead. The

on the turn gave him a boat to wrap it up, and the

on the river didn’t mean too much at all. 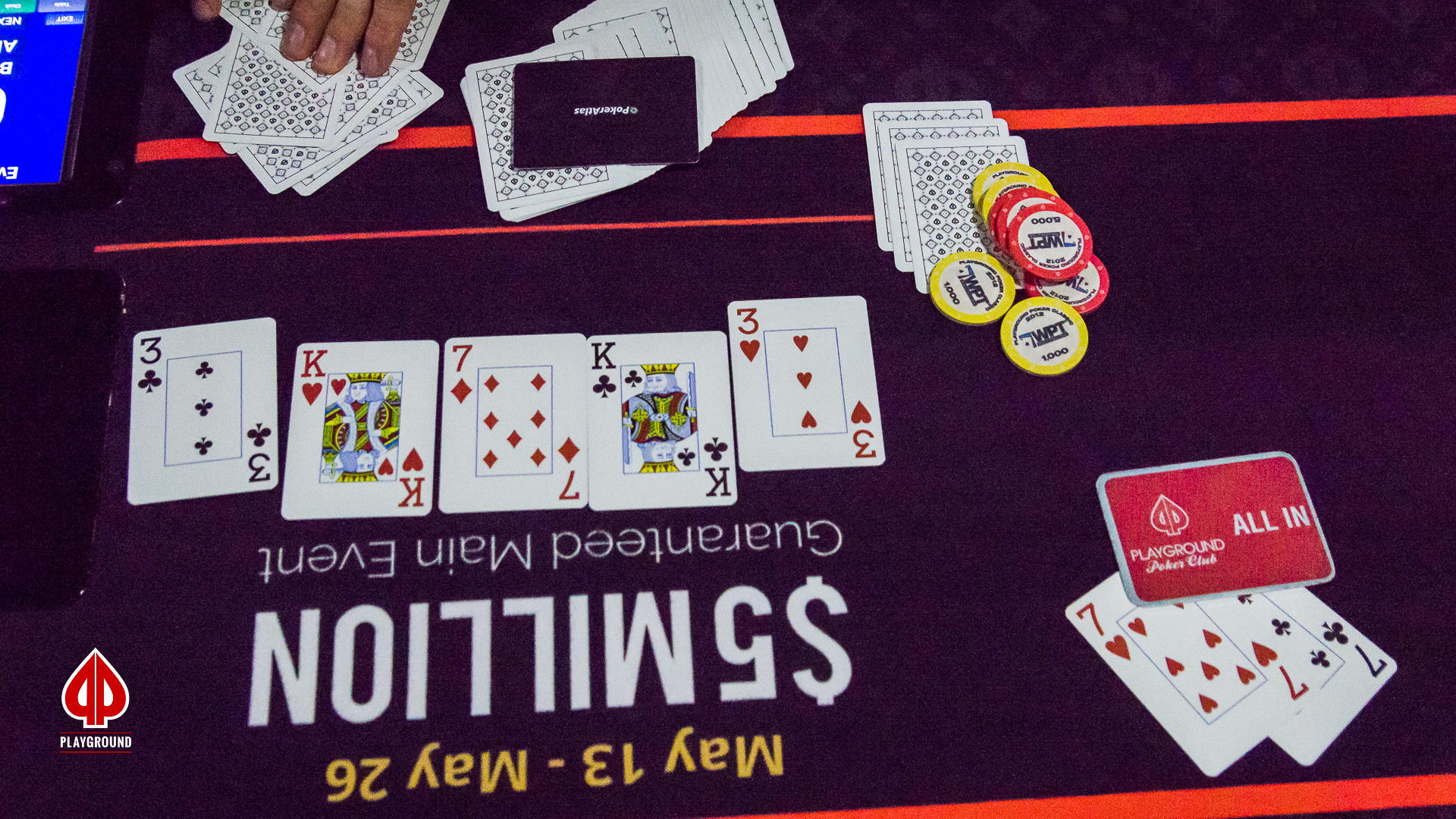 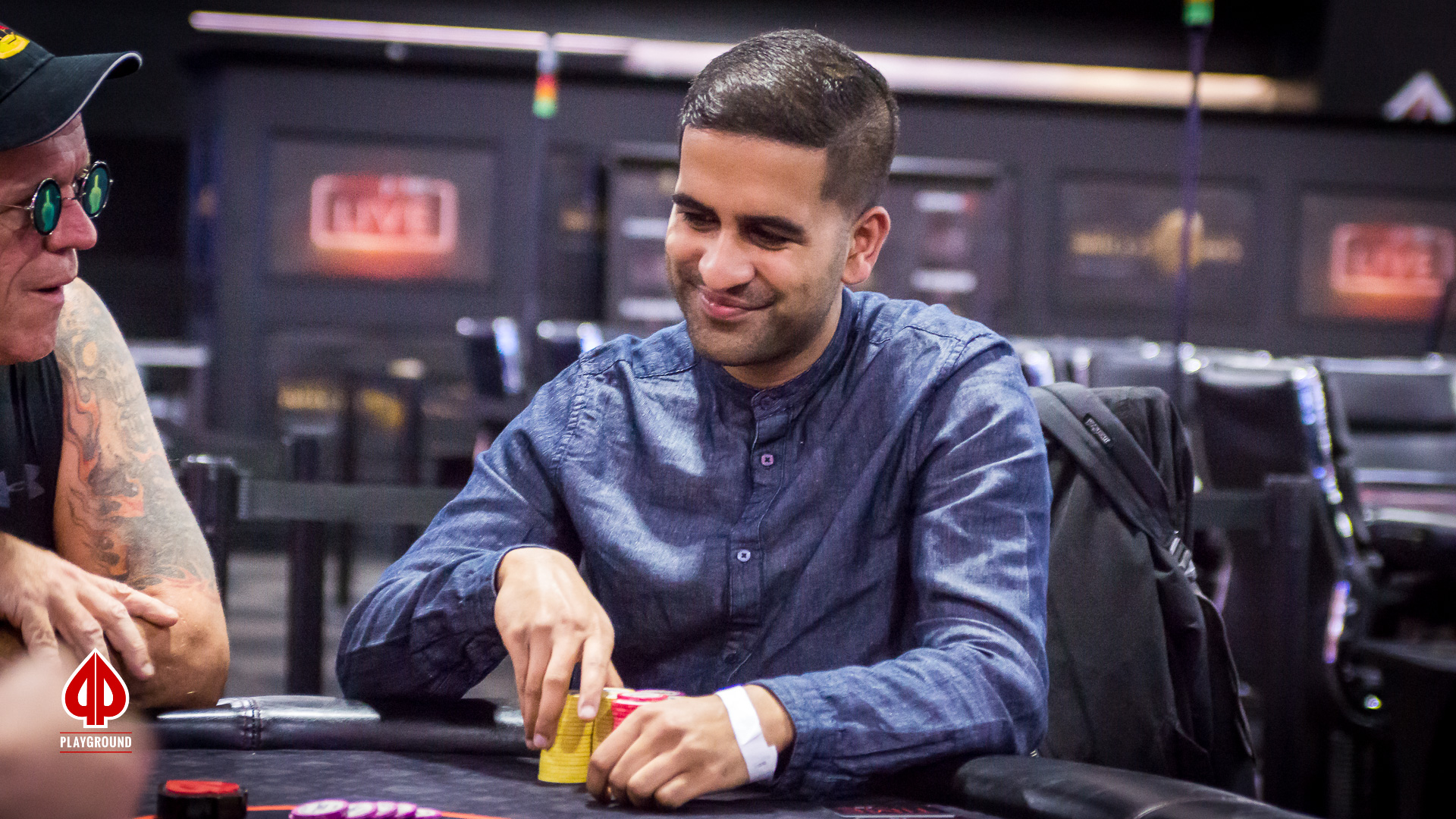 The bubble has finally burst in the $500+$50 8-Max Event #5. All of the remaining players are now in the money, and as soon as the bubble had burst, the small stacks who were holding on and hoping to at least make a min-cash started to go crazy and shove, shove, shove.There were five bustouts within the first 10 minutes once the players knew that they were assured of getting paid.

This is how the payouts have gone so far:

The players have just returned from the third break of the day and the field has definitely thinned out. There are now only 26 players remaining, all fighting it out for the top prize of $16,830. The min-cash happens in 18th so there will be some pressure on the small stacks from the big boys sitting on piles of chips. There will be a table re-draw at 24 players, at which time the players will move from the tent area to the main tournament room. 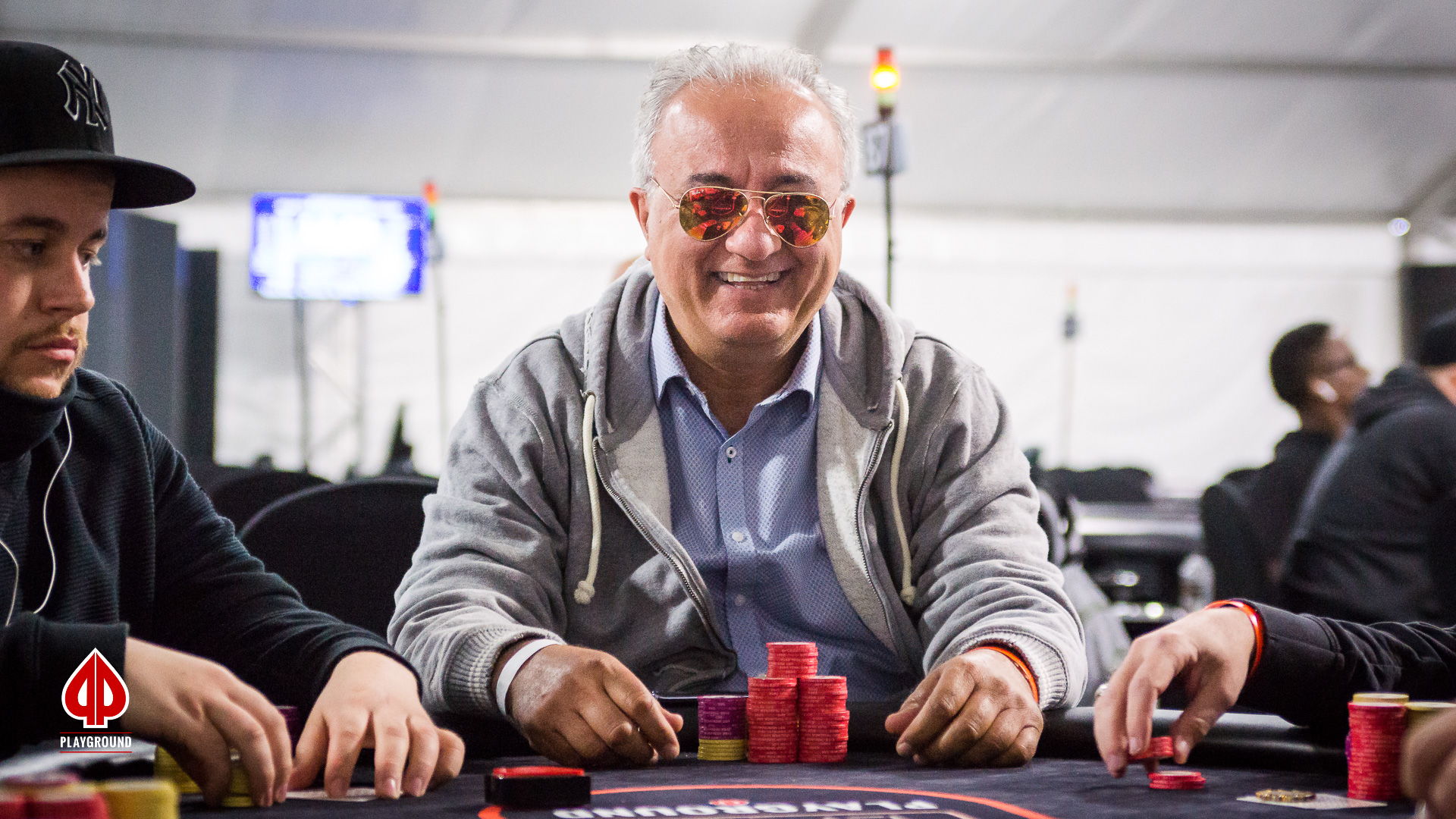 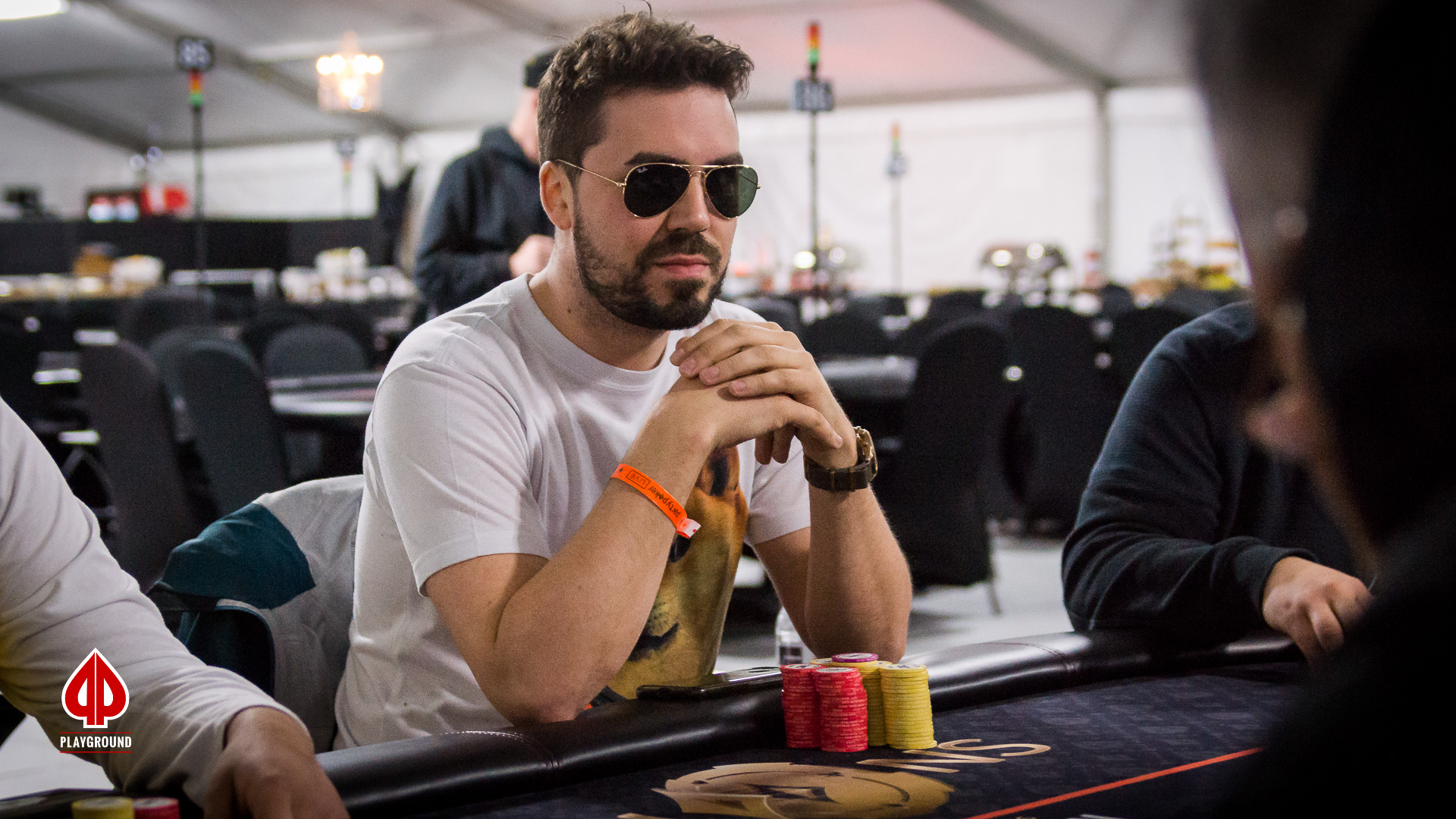 The field in the 8-Max is down to less than half of the original entries. Only 60 players remain after roughly four hours of play.

Some big stacks have emerged since the last break; it is now a three-horse race for the chip lead. Aidan Tiefenbach, Andres Korn and Mehdi Badreddine control the largest stacks in play, each in the vicinity of the 200,000, which puts them comfortably ahead of the rest of the field. The chip average now provides slightly more than 30 big blinds so the shorter stacks will begin to feel the pressure in the coming levels.

On one of the remaining tables in Event #5, 3 players were playing a 11K pot on the flop. Kyle Brush opened with an all-in bet, covering the pot by a little. Daniel Golea did his best to isolate his, pushing 45K forward. Christopher Turnbull pondered.

He talked to himself for a while, then called clock on himself, claiming that he prefers to call it to himself then to hear someone else call it. At the very end of his time window, he elected to muck his king-queen hand face up, and when he saw Golea’s aces, stormed away from the table saying: “I’m so good at this game!”

One other player called Turnbull back to the table and needled him nicely: “You s%&@ at this game!” Poker is as tough as it is entertaining! 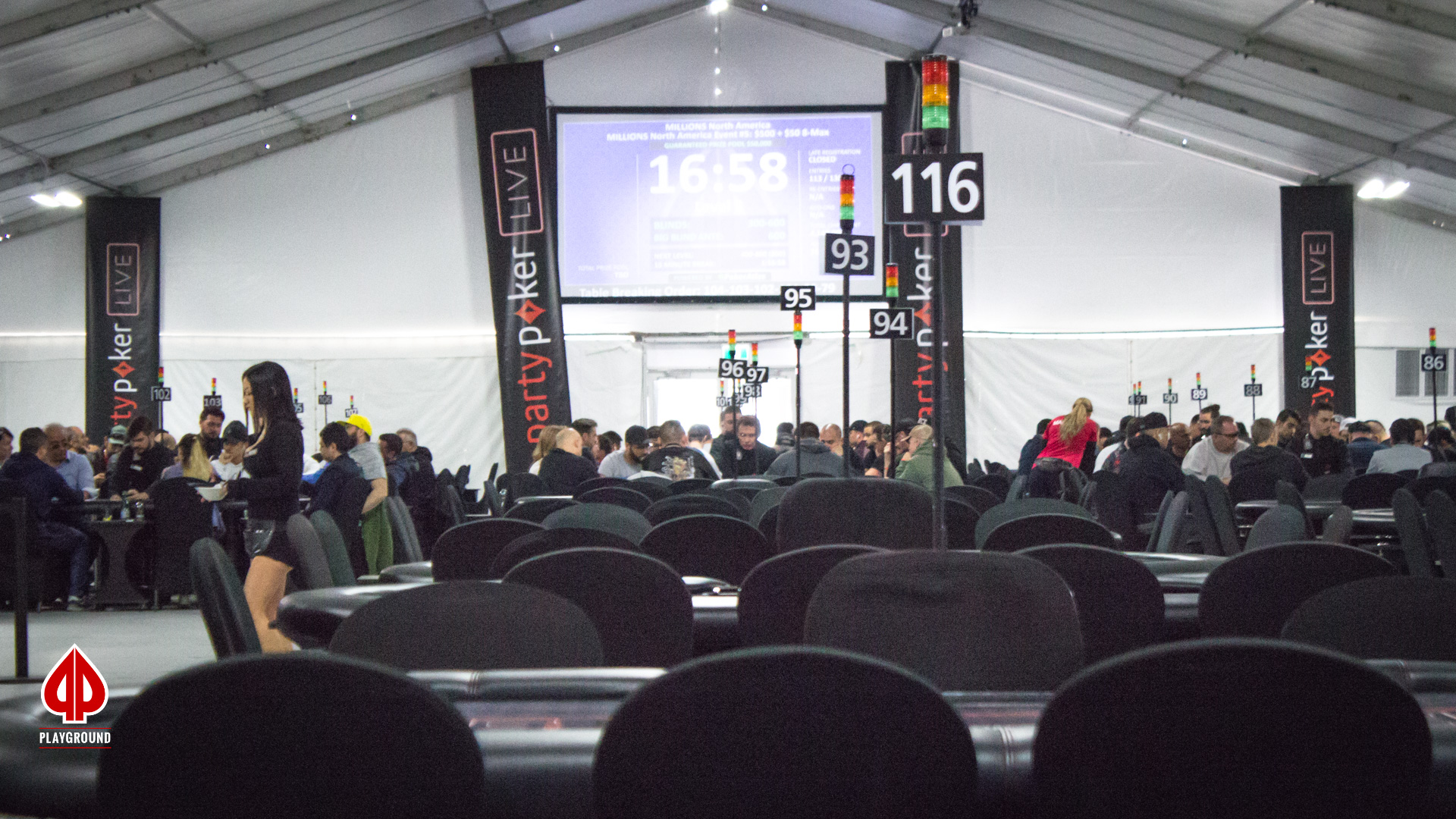 Players will take a break in about 25 minutes and come back in the tent to attempt a deep run in a nice well-conditioned atmosphere. Here is the complete payout table, followed by some recent shots of the field: