It’s been a long day, full of action and fun. After it was all said and done, a total of 107 happy but tired players get to come back tomorrow for Day 2 of the MILLIONS North America Main Event.  They will be joined by the 151 Day 1A qualifiers, for a total of 258 players on the felt tomorrow.

Today’s flight started off smoothly, as expected in a multi-day tournament of this level.  The players adopted a prudent approach, mindful of the fact that there was no way of re-entering if all was lost.  The variable degrees of skill and experience in this field also had an impact on the global approach of most players.  One could spy a seasoned professional, an international player and/or a local champion at any given table.

From the start, the undisputed forerunner was Aleks Dimitrov, the 26-year-old Bulgarian player, with more than $300,000 or recorded live cash winnings to date.  Even this early in the flight American Brandon Hall, whose cash winnings exceed $1,800,000, was hot on his heels.  As the day wore on, both Dimitrov and Hall kept neck to neck and stayed on top of the leaderboard.

By the time the dinner break arrived, other players had caught up.  Now Michael Farrow, from Ontario, Canada, who recently placed first at the $1,100 NLH WPT Fallsview Poker Classic in Niagara Falls, was the chip leader.  Also in the top four with Farrow, Hall and Dimitrov, was William Givens IV, from Colorado.  Givens has over $2,000,000 cash earnings and was crowned the champion of Event #45 ($1,000 NLHE) of the 45th World Series of Poker in Las Vegas in 2014.

In the late stages of this flight, Brandon Hall eventually gained the top spot on the leaderboard.  Dimitrov had lost a little ground and was now fifth in chips.  A new set of players had squeezed in between Dimitrov and Hall.  Jonathan Dwek, from Toronto, Turkish player Orpen Kisacikoglu, and Canadian Michal Wywrot had managed to hoard enough chips to rank in the top five.

So that’s a wrap for now, and the action will pick-up again tomorrow.  Here are the dates and times of the remaining days of the MILLIONS North America Main Event: 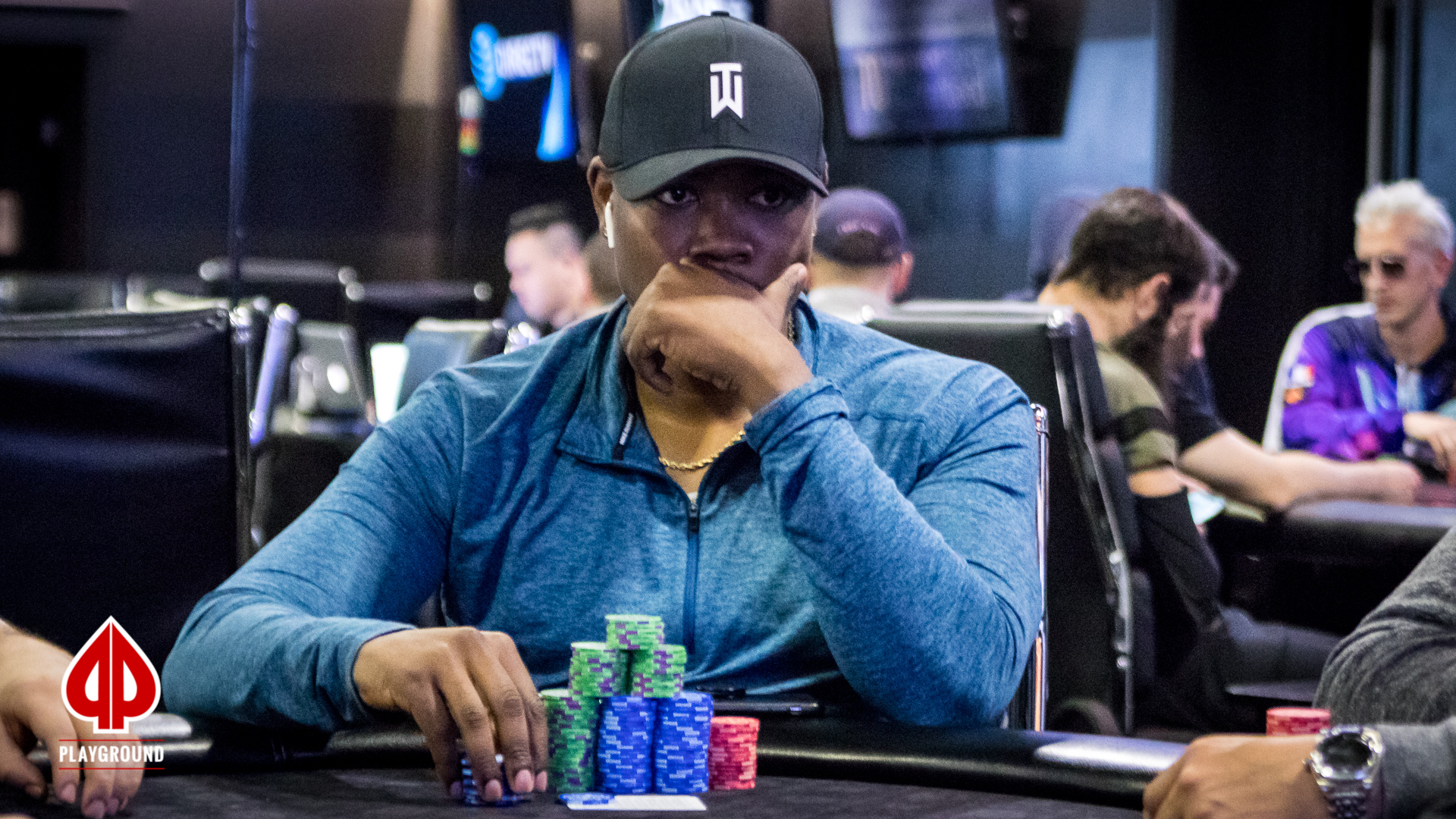 The players are coming back from their last break of of the evening. The clock has been paused to reset the feature table and the action will get under way in a few minutes.

This was the perfect time to update the leaderboard. The day has pretty much been Aleks Dimitrov’s cup of tea. From early on he jumped ahead of the pack and stayed ahead through most of the levels up to now. We set the bar at 3.5 million chips for this edition of the leaderboard and Dimitrov just made it. Brandon Hall, another regular figure on today’s stack radar, has jumped ahead of them all with his 4,860,000 stack. 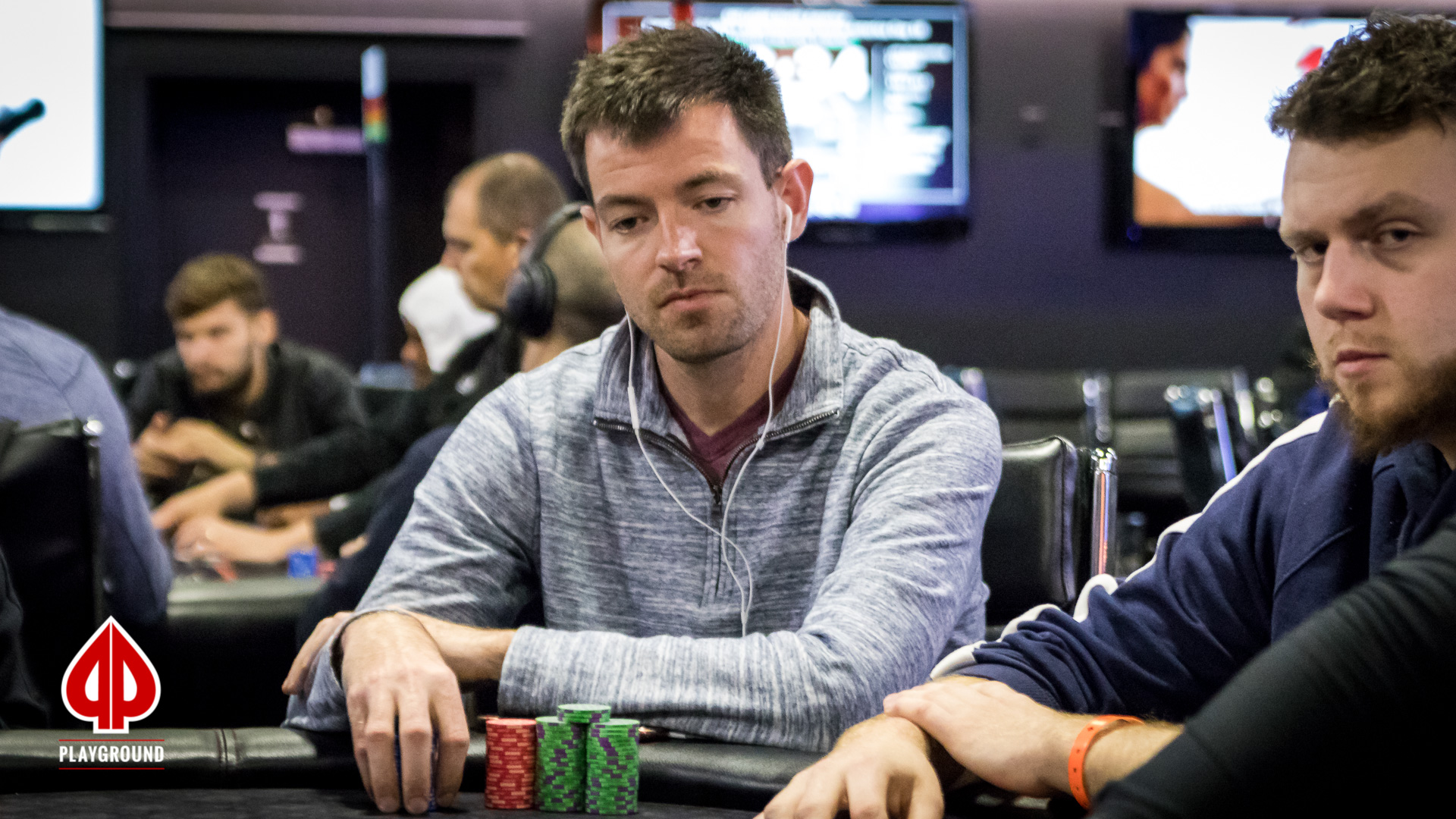 The action is intense but controlled on the felts. Players are three-betting, four-betting, folding, and overall just making sure they control the pots, the hands, and, specifically, their stacks.

Like last night’s Day 1A, most players have a cautious approach, especially the seasoned ones.

We’ll have an updated leaderbord, the last of the evening, at the end of the current level.

Here are some photos of the players, from level 7.

There are now 159 players left in this last Day 1 flight. The players are taking a well-deserved break for dinner.

William Givens IV, Brandon Hall, Orpen Kisacikoglu and Ludovic Geilich are each sitting on more than 3 million chips, and top-off the leaderboard halfway through today’s flight.

Things are moving along in Day 1B. The ten satellite winners joined the group at the last break and everyone seems to be having a good time. The next break will be a 60-minute intermission to allow the players to get a bite to eat. This longer break will also allow the tournament staff to get a full chip count for all remaining players.

The players had a short break and we took the opportunity to update the leaderboard. Aleks Dimitrov has managed to stay on top of the list, with now 3,661,000 chips. Brandon Hall (3,305,000) and Harpreet Singh Gill (3,034,000) are right behind him and are the only other two players above 3 million chips.

The late registration period is closed and the total number of entries for today adds up to 217. This brings the total combined Day 1 entries to 521, which propels the prize pool above it’s $5,000,000 guaranteed amount. Players are obviously cautious and carefully assess their chances, only 30 players have hit the rail since the onset of the tournament, five hours ago. 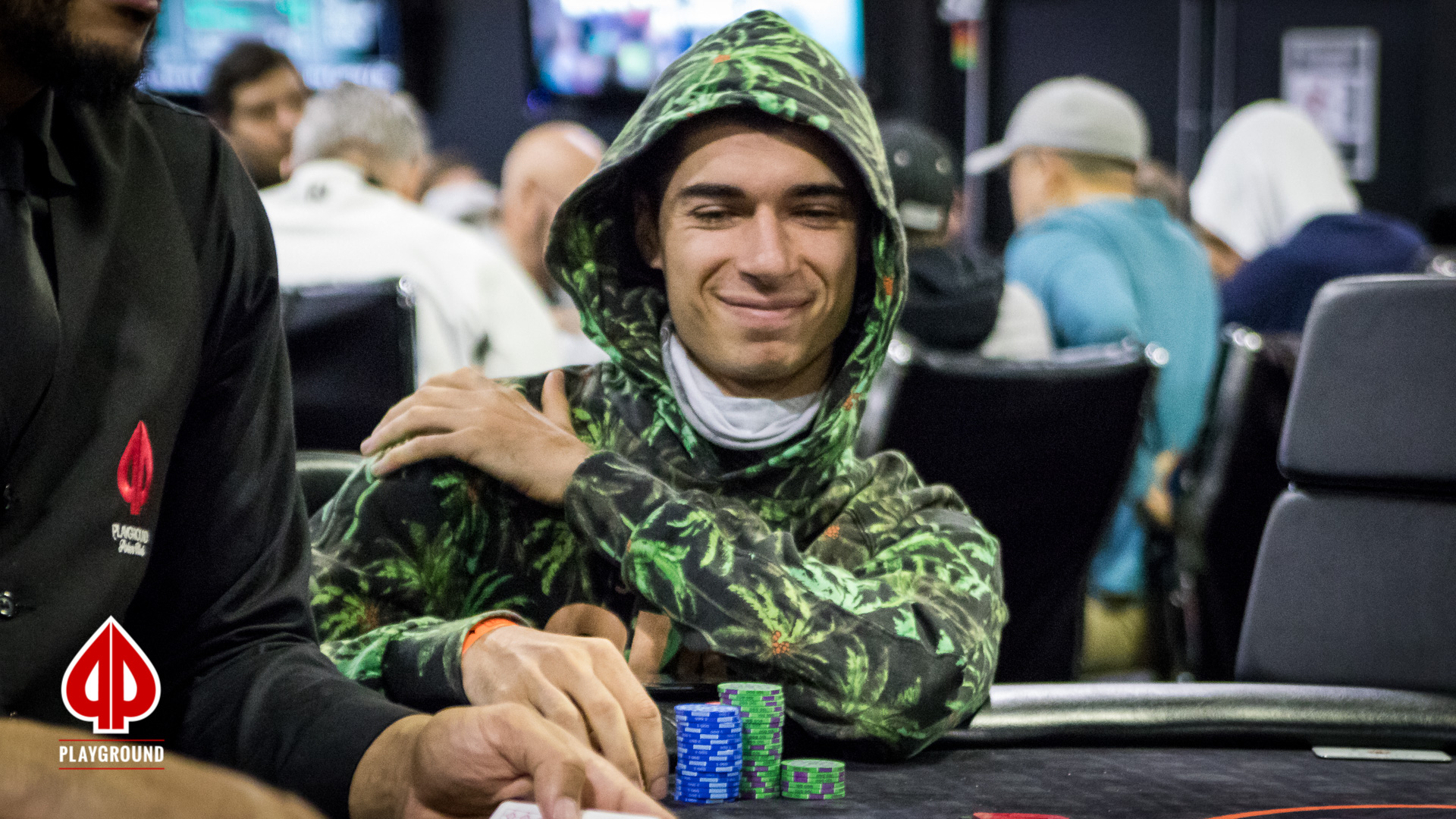 The boards are showing 200 entries and there is just about 45 minutes left for late registrations. We’ll have an update of entries and chip leaders at the next break.

Here are a few photos from the players taken during level 2.

After two levels, a few players have managed to rise above 1,5 million chips. During the short break we took a moment to go around the tables and see who’s doing well.

Young Bulgarian Aleks Dimitrov is in the lead with 2,908,000 chips, his closest rival are Brandon Hall (2,352,000) and Felix Martel-Racine (2,013,000). The three players are the only ones who have amassed more than 2 million chips so far. But it’s early, and poker is nothing if not unpredictable.

The guaranteed $5,000,000 prize pool has been exceeded. Also, the last satellite for the Main Event is currently running, and the 10 seat guarantee will send an additional ten players into the Main Event as well. 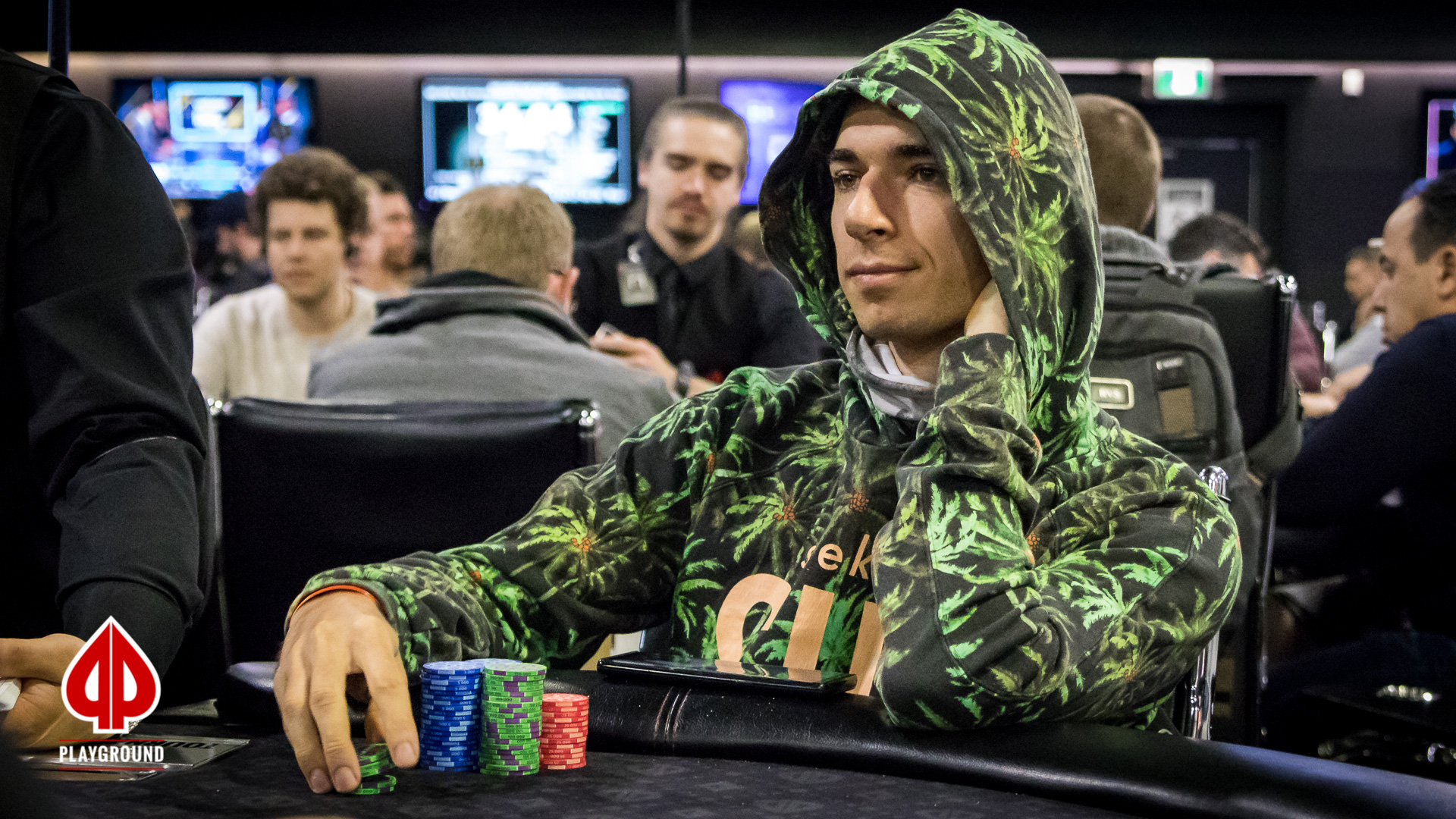 Things are moving along in Day 1B of the Main Event.  Players are half-way into level 1 and everyone who entered is still seated.  Just like yesterday’s Day 1A flight, the players approach is cautious and calculated.  They know they are in it for the long haul and are playing accordingly.

Here are a few photos of the players from level 1.

Loaded with a $5,000,000 guaranteed prize pool, this is THE event you don’t want to miss. The Main Event has only two Day 1’s. Last night’s Day 1A attracted 304 entries and saw 151 players qualify for Day 2.  Sandy Lam bagged a whopping 6,84 million chips, and Manig Loeser threw 6,620,000 chips in his bag, roughly three times the average, so the bar is set pretty high for today’s contenders. The list of qualified players and their chip counts can be found here.

Players have until the beginning of level 5 (approximately 4:30pm) to register. Remember that if a player survived Day 1A and chooses to play Day 1B, their qualified stack from Day 1A will be forfeited with no possibility of recovery.

Players start with 1,000,000 chips and blinds increase every 60 minutes today. The tournament will stop after 10 levels and resume Thursday, May 23 at 12:00pm for Day 2. The rules and tournament structure can be found here. 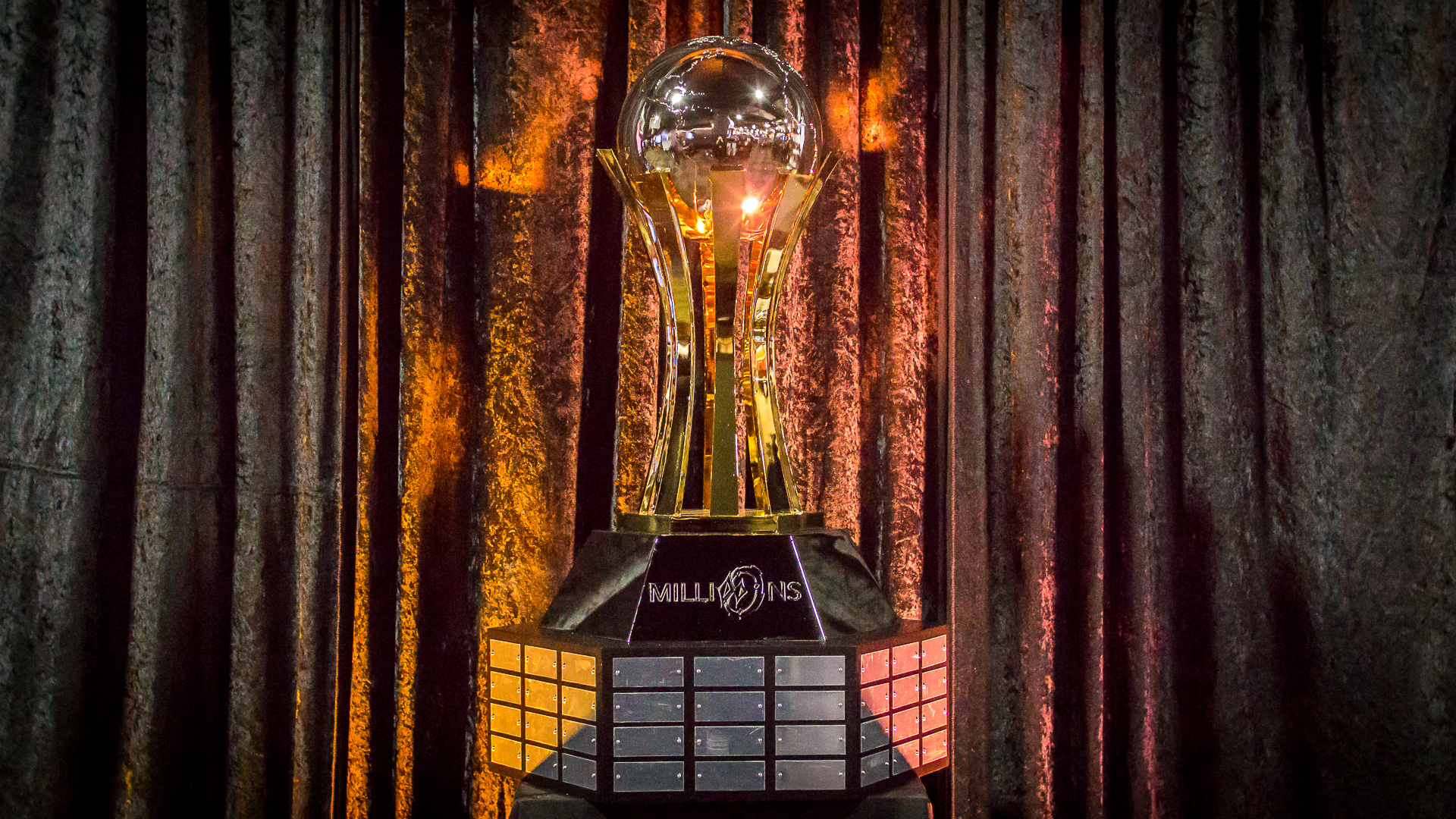