Day 4 of the MILLIONS North America has come to an end, as the final six are ready to now battle it out tomorrow on the final table.

Only 16 players returned today for Day 4. When play began on Day 3, 66 players were still in contention, only three eliminations from the money bubble. After roughly an hour of play, the money bubble burst and the top 63 finalists secured at least $20,000 each. When the flight concluded, the 16 remaining players had locked up at least $40,000 each, but you can be sure that everyone’s focus today was on the $1,000,000 champion’s prize.

Day 4 featured 90-minute blind levels and 8-handed play. It took quite some time to form the “unofficial” final table of 9 players, and then even longer to make it down to the final six. Jason James was the first to exit the tournament room, finishing in 10th place for $60,000. The next player to hit the rail was Armin Razael, finishing in ninth spot for $100,000. Ruben Receval, a local player who has made WPT final tables here at Playground, followed in eighth position for a cool $150,000. The last player to exit was Benjamin Heath, finishing in seventh for $200,000.

Click here to watch the live streaming of the final table. 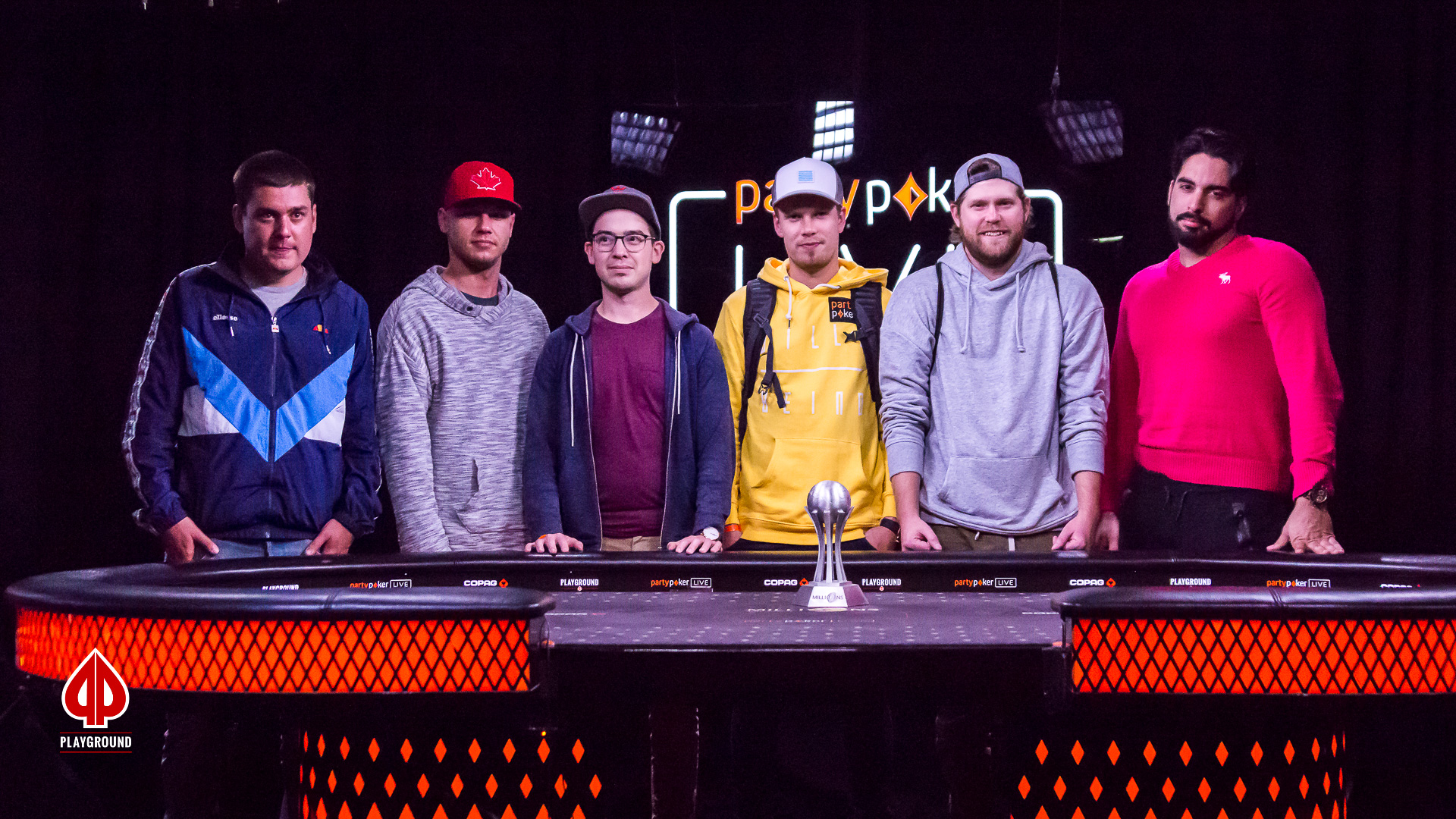 in early position. He decided that it was time to do it. He moved his stack forward and announce that he was “all in”.

Action folded to Danick Landriault in mid position, who was sitting on 53,350,000, and he looked down at

. He went deep into the tank as he was facing a tough decision. Sitting on 38 big blinds, if his pocket 7’s were good, he would be up to about 55 bigs. If he lost, he drops down to just over 20 bigs. After thinking it through for some time, he let go of his hand.

, and he shoved over the top without any hesitation.

Ruben was drawing to two outs. The flop came

which was of no help to him.

. There was only one card to go and only two outs.
River:

Kevin won the pot to add to his massive stack, and Perceval hit the rail eight place, collecting $150,000, a great deep run, but obviously not the result that he was hoping for. 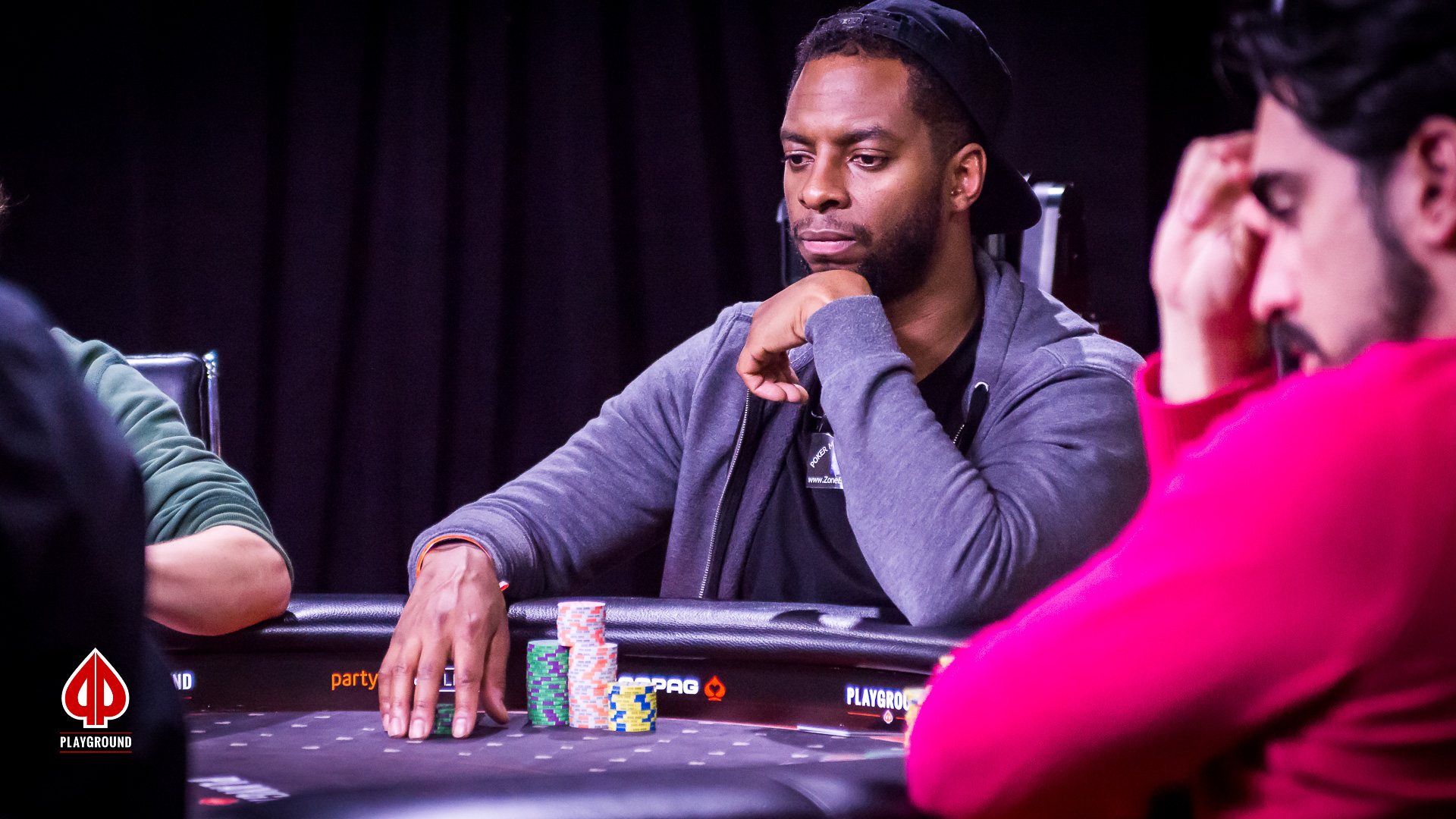 The players have just gone on break, giving us a chance to count the stacks: 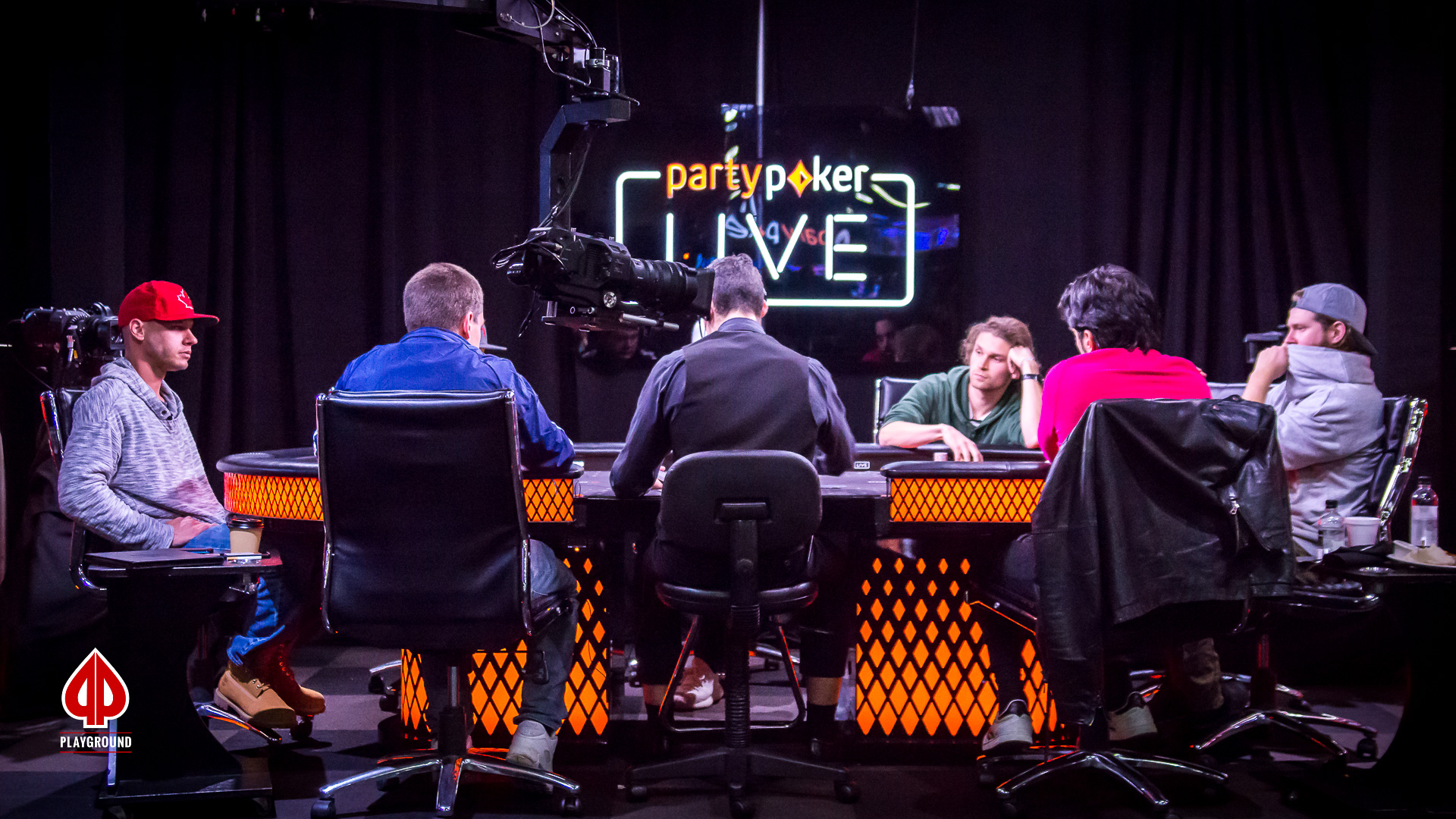 Armin Rezaei, who had been looking for a spot to gamble on, pushed his chips with a pair of fives in the hole. He was facing kings, and in the absence of help, was forced to leave the party. He made sure to shake some hands first, showing great sportsmanship.

The remaining 8 players posed for the cameras, all smiles, knowing that they are sure to make at least $150,000. 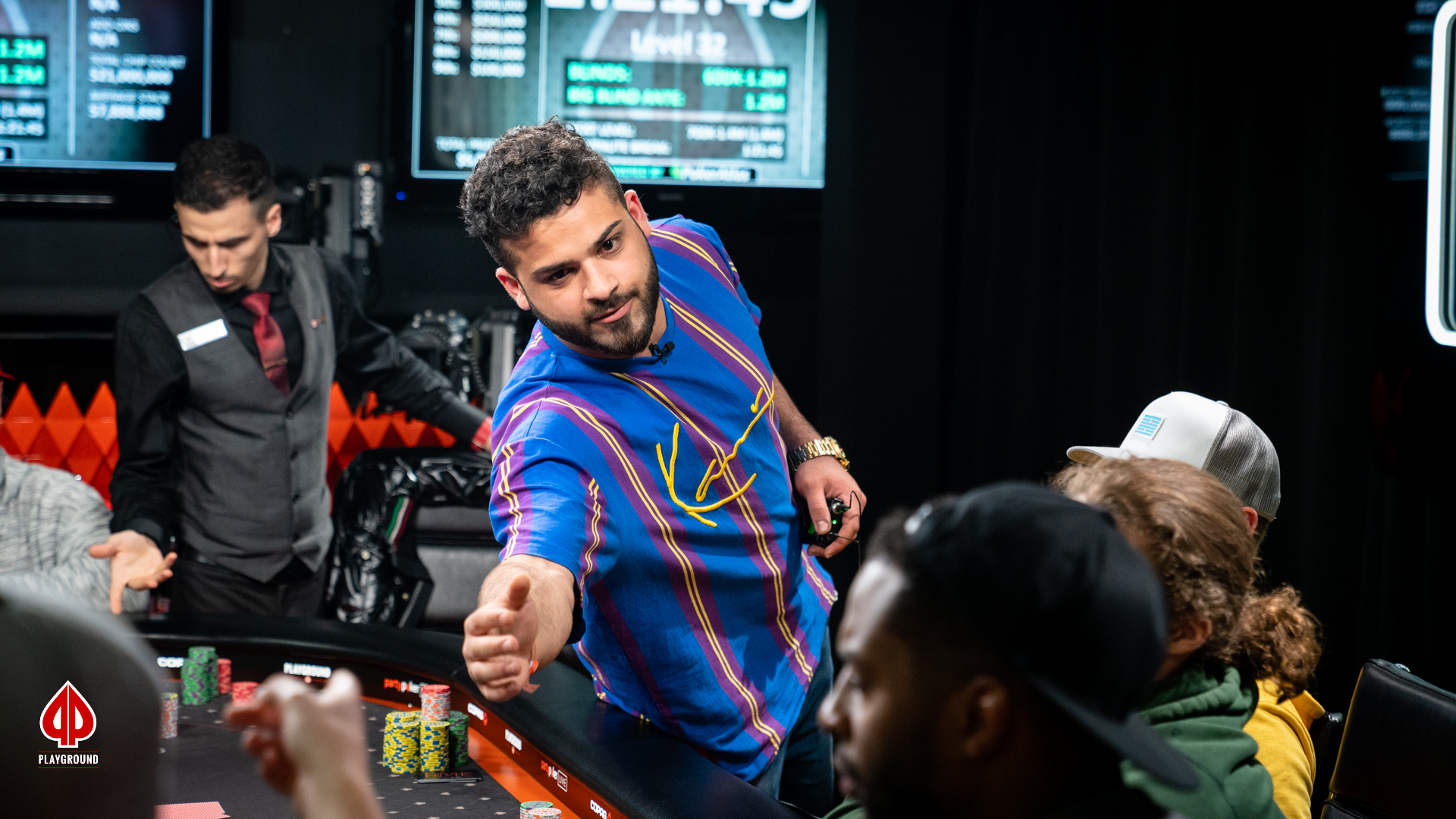 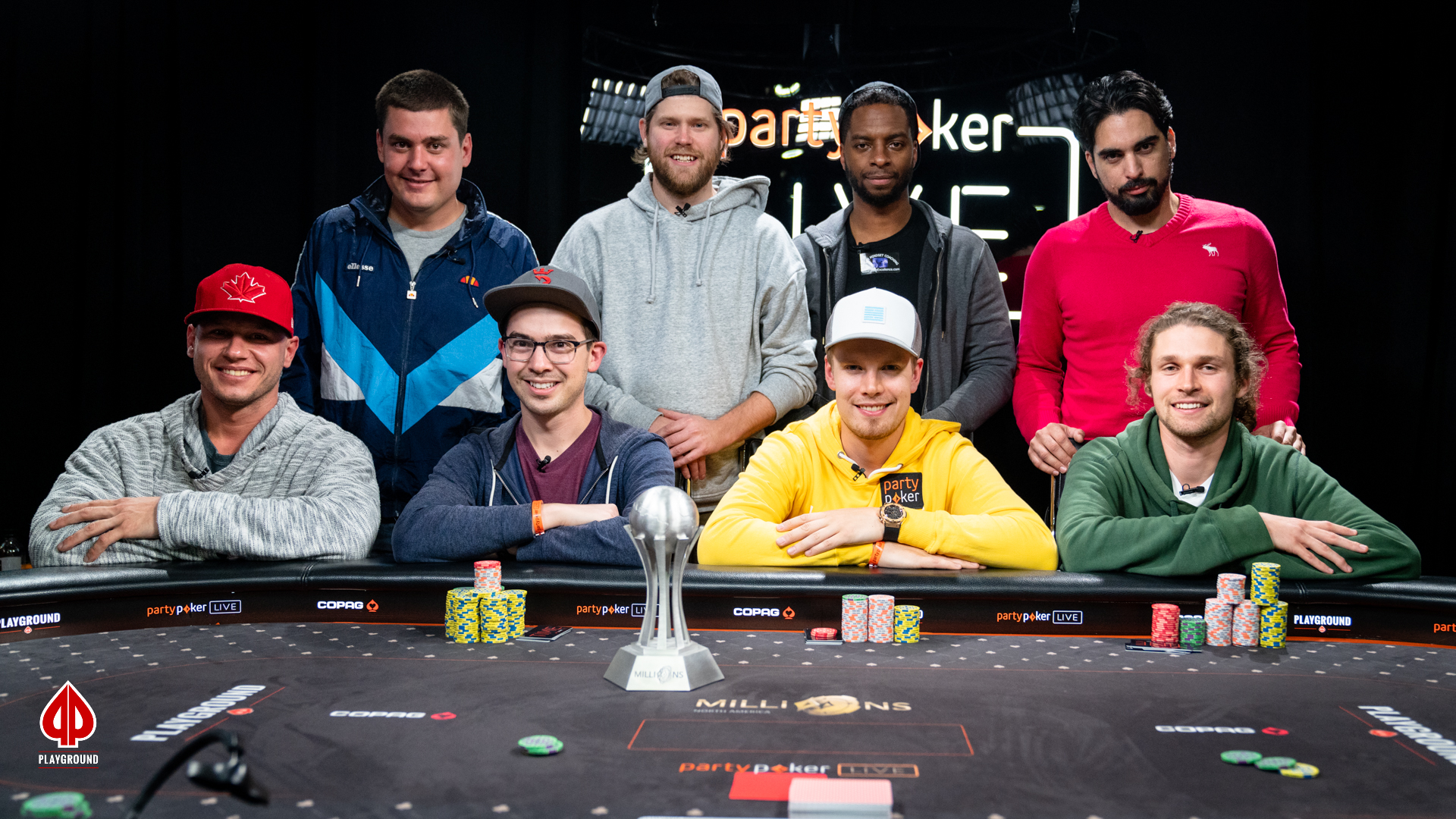 The final table of the Main Event has not lost a member yet, despite 2 short stacks having gone all-in against former chip leader Danick Landriault. Alexandros Kolonias managed to survive when his

flopped a queen against Landriault’s

Later on, it was François Billard who was fully invested. His

looked like it was going to fall short against Landriault’s pocket tens, but a queen appeared on the river to keep Billard alive.

Players are now on break. Here are the full counts: 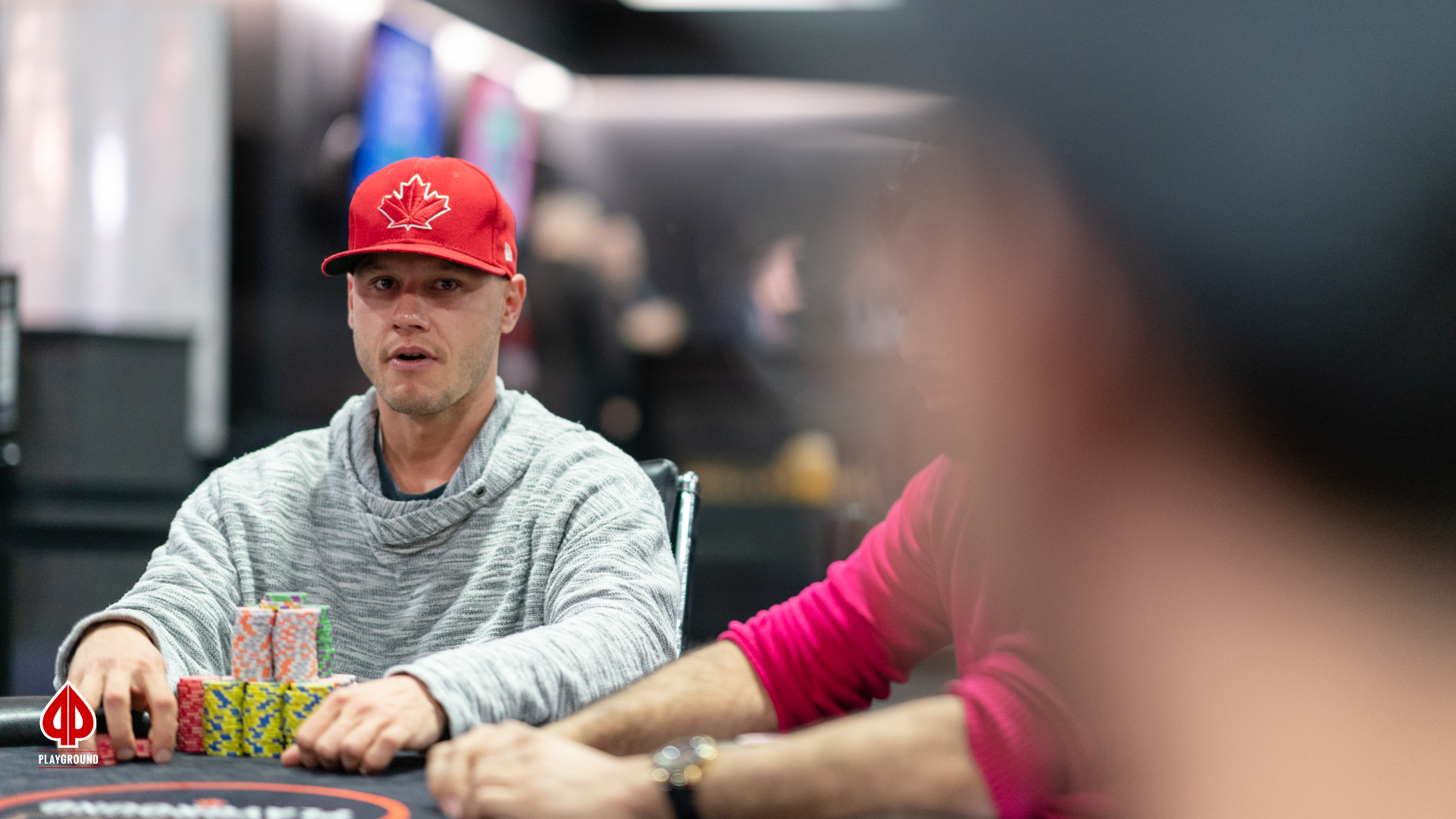 The $10,300 Main Event has just lost Jason James. He went out in 10th with a flopped 2-pair against Paul’s turned set. A brutal run out for James, but he goes home with $60,000, and 9 other players are pretty happy to make the final table, where gargantuan prizes await up top. Play will continue tonight until 6 players remain.

Here is the seating distribution:

Following Upeshka De Silva’s recent elimination, the Main Event is down to 10 players.

All the chips went in on the turn of a heads-up pot between De Silva and Castrillon Fontan. After the

flop, the action card proved to be the

on the turn. When it appeared, De Silva checked over to Fontan who moved all in. De Silva took a moment before slamming a handful of chips on the felt, and the cards were tabled. It was

for Da Silva against Fontan’s

. De Silva had a healthy lead with two pair against the over pair. But everything changed on the river. It produced the

and counterfeited De Silva’s hand in the process to give Fontan the pot and send De Silva to cashier to collect his $60,000 payout.

Erik Lemarquand has just made his exit from the MILLIONS North America Main Event in twelfth place.

He started the day with a relatively small stack and did well to hang on long enough to make the pay jump to $60,000 before running out of steam.

Here’s a look at the remaining players from the last level of play:

The players in the Main Event have just returned from their first break of the afternoon, with only 12 players remaining.

Danick Landiault has increased his dominating chip stack and now has a roughly 3:1 chip lead over his nearest rival. Following Senthuran Vijayaratnam’s elimination in sixteenth, Seyedrohollah Ettehadi, Josue Sauvageau and John Cayley followed suit in quick succession, each earning $40,000 in the process.

The full chip counts of the remaining players:

Day 4 of the Main Event just produced its first elimination.

Senthuran Vijayaratnam, known for making deep runs in Playground’s major events, has just been eliminated in sixteenth place. He started the day with one of the shorter stacks in play and took a shot at doubling up but came up short. He will collect $40,000 for his deep run.

Only 16 players remain in the MILLIONS North America Main Event.

When play began on Day 3, 66 players were still in contention, only three eliminations from the money bubble. After roughly an hour of play, the money bubble burst and the top 63 finalists secured at least $20,000 each. When the flight concluded, the 16 remaining players had locked up at least $40,000 each, but you can be sure that everyone’s focus is on the $1,000,000 champion’s prize.

The stage is set for Day 4, which will feature 90-minute blind levels and 8-handed play. When play resumes today at noon, the players will be seat according to the following table.