It’s been quite a roller coaster ride today in the Montreal Open Day 2.  The day started with 473 players seated at tables across the entire tournament hall.  The action was swift and unforgiving.

The top baggers from the previous Day 1 flights had imposing stacks of chips to play with.  Starting today, David Bolduc Hamel was the overall Day 1 chip leader, with 13,865,000 chips. He was in good company with five additional  players who had managed to bag more than ten million chips themselves.  With 1.5 billion chips in play anything could happen.

The $1,494,555 prize pool was announced today as well.  This event boasted a guaranteed prize pool of $1,000,000 but that was exceeded after the second flight of Day 1’s.  On top of the prize money, the top 15 players will receive a MILLIONS Main Event seat, worth $10,300.  The players needed no more incentive to dive in and take no prisoners today.

Adil Morkos took an early lead and kept it that way for half of the evening, and by level 23 he had more than four times the average.  Then the winds changed and two new leaders emerged.  Scott Ahonen and Danny Kalpakis took the lead and remained in good shape for the remainder of the evening. Kalpakis bagged a respectable 51,400,000 chips, and Ahonen dropped 49,375,000 in his bag.

The 62 players will be back at the felts tomorrow at noon when Day 3 kicks-off. 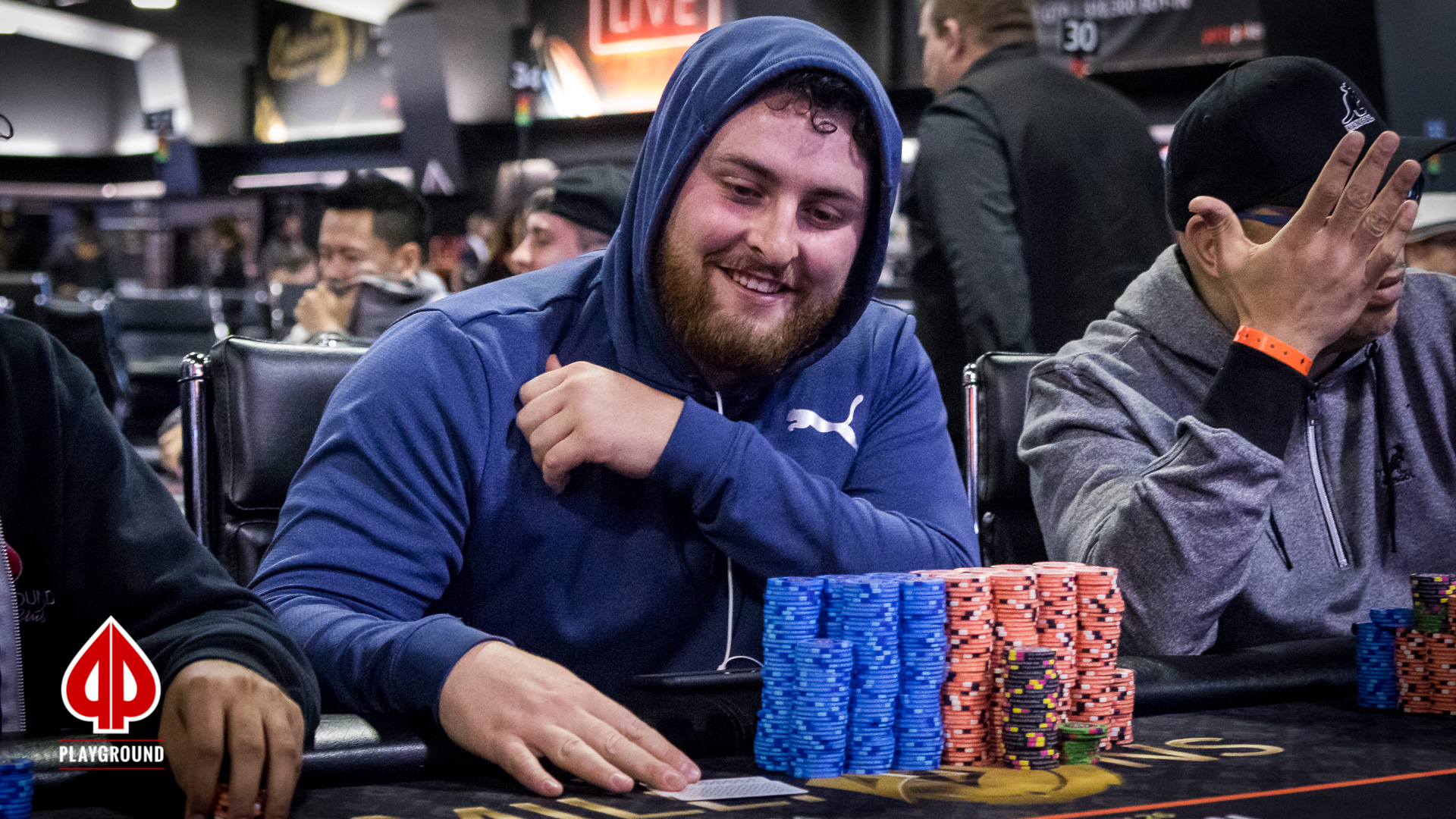 Patrick Braga was in dire need of a double-up. Up against John Cayley, who had just shoved all-in, Braga didn’t think long before calling and both men tabled their hands:
Patrick:

Patrick knew he was slightly behind, and when the flop came out, the window was bad news:

. And then it got worse, the window was hiding another ten. So Cayley flops Quads and effectively crushed Braga’s hopes and stack.
Board:

After all was said and done, Braga was left with 250,000 chips, the equivalent of the small blind.

The following hand involved both Cayley and Braga, but also Lam Nguyen. From an early position, Braga took a peek at his hole cards and quickly did the math and figured out that he was going to be big blind soon. If he waited that long, he would only be able to win back his ante. So he pushed his modest stack forward. Cayley took a quick peek at Nguyen’s stack, who was big blind, and shoved on top in a clear message to Nguyen to back-out. But Nguyen surprised everyone by going all in as well, for approximately 5,000,000 chips. Everyone opened up.
Lam Nguyen:

The flop received a happy hoot from Nguyen:

who had flopped a set. Braga was out of his seat even before the remaining two cards came out:

The players are now on their last level of the evening. 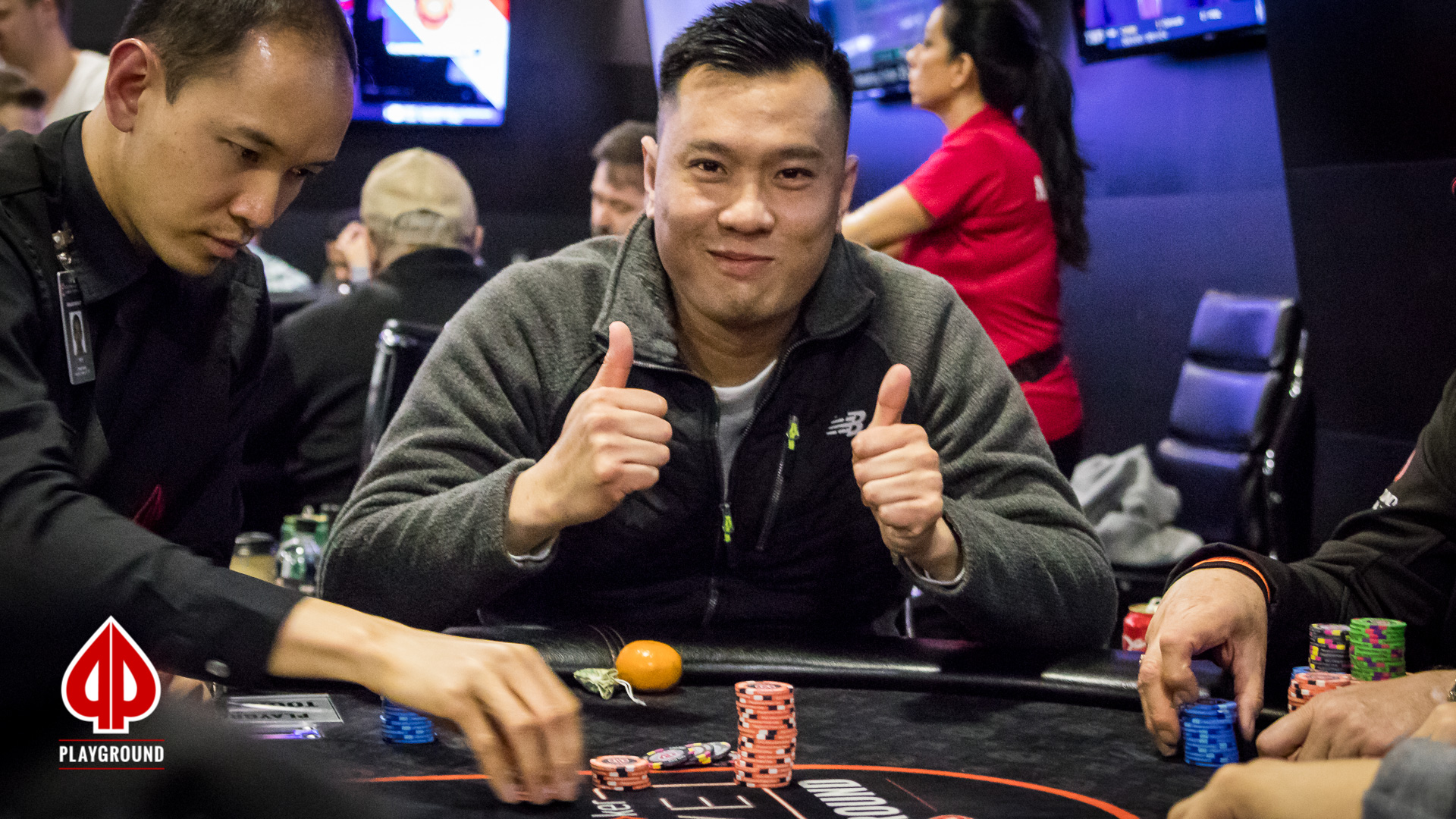 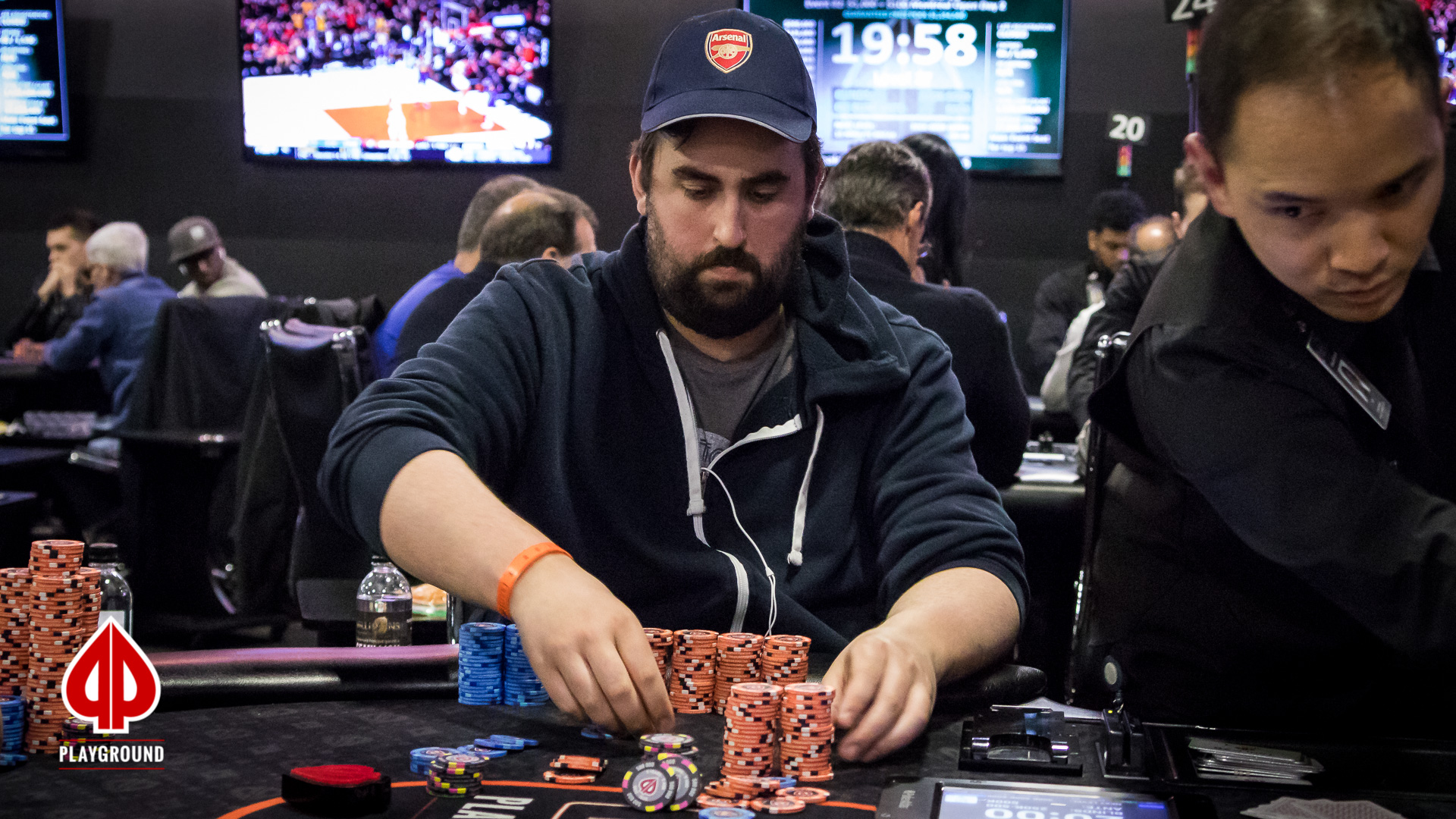 Day 2 of the Montreal Open is in it’s final stages, with three 40-minute levels left to go. There are 119 players left and the tension is mounting as the chips get harder and harder to scoop.

Both Scott Ahonen and Danny Kalpakis have amassed more than 47 million chips. Ahonen is the official leader with 47,625,000 chips, but Kalpakis is hot on his trail with 47,400,000. This is staggering amount of chips and their stacks are being eyed with envy by a lot of players. Six other players have also gained decent stacks above 30 million chips and are showing no signs of slowing down either. No table is host to more than one of the chip leaders; that means they are not threatening each other, yet. But the tables are closing, and players are being re-seated regularly.

In less than two hours, the bags will come out and we’ll see how the 1.5 billion chips in play are divided among the qualifying players. 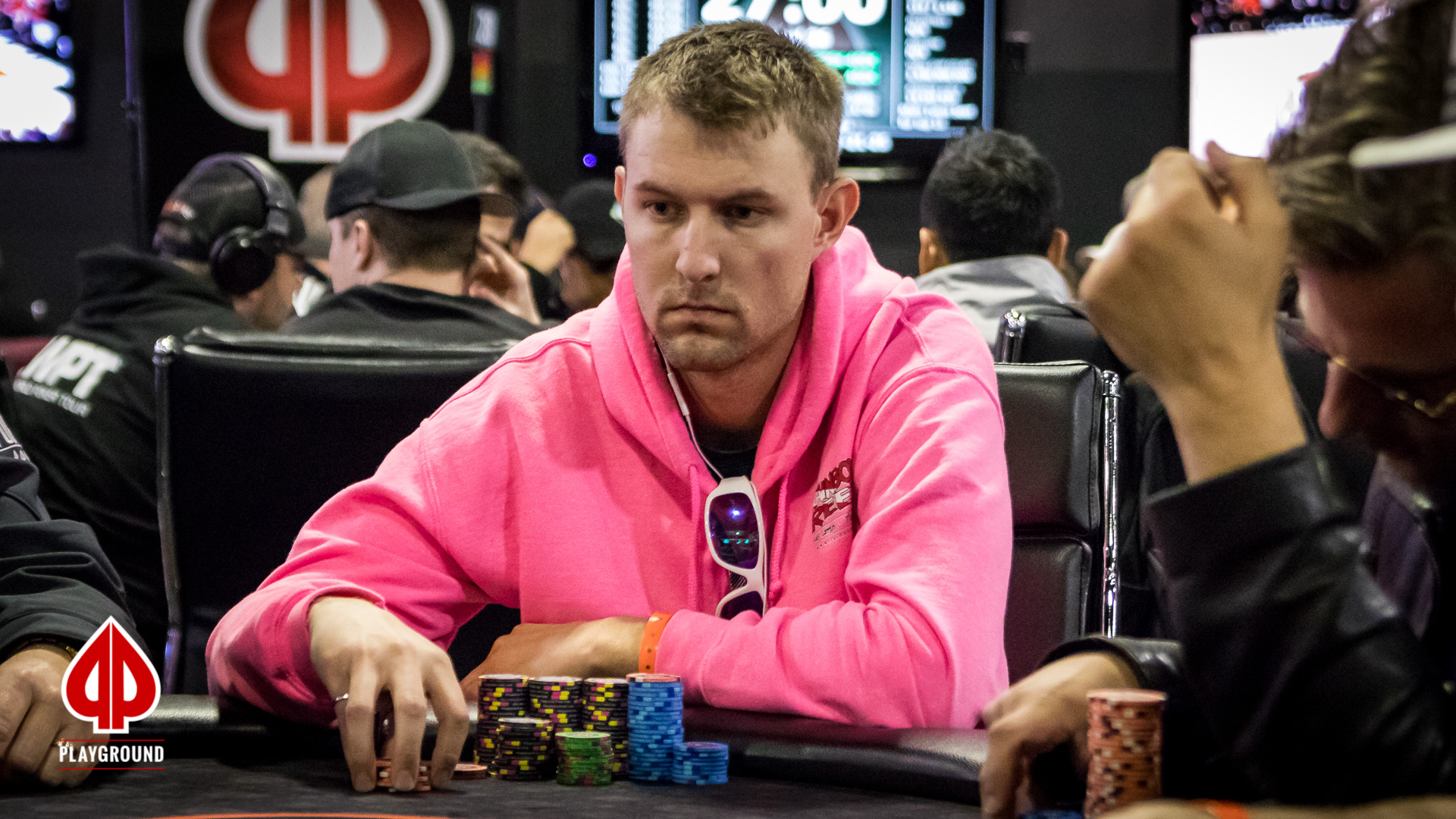 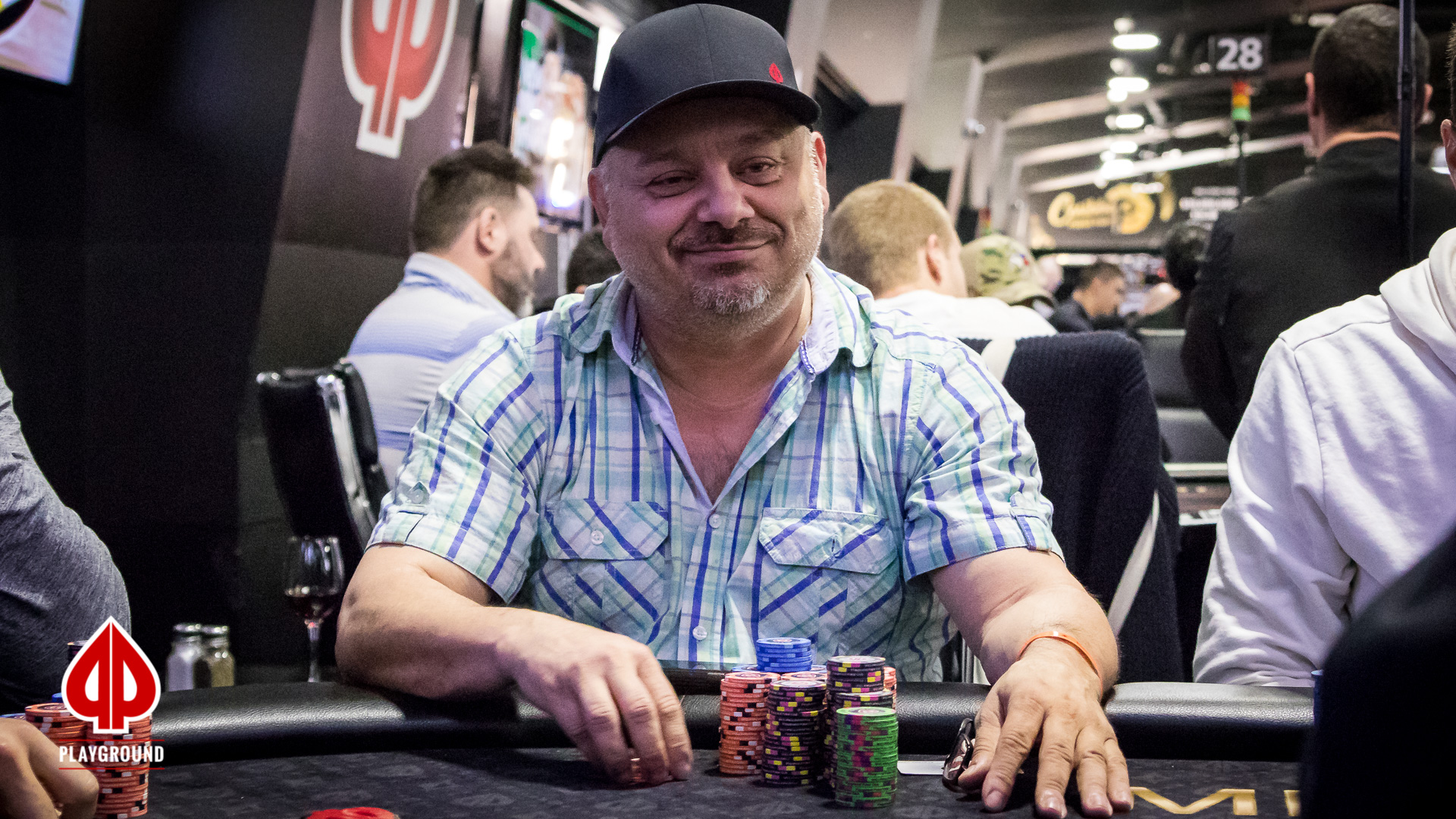 The green chips are out! Worth 1,000,000 chips, these little beauties have everybody wanting them. Bagging the greens is the mission of everyone here.

The action is going strong, and the raise in the blinds is leaving an unmistakable trail of short stack shoves all across the field. The players are going to take a short break in a few minutes, and it will be their last break of the evening. Then play will resume for another two hours before the bags come out for Day 3 qualifiers.

There are presently 122 players left and the field is getting smaller and smaller at a steady pace. 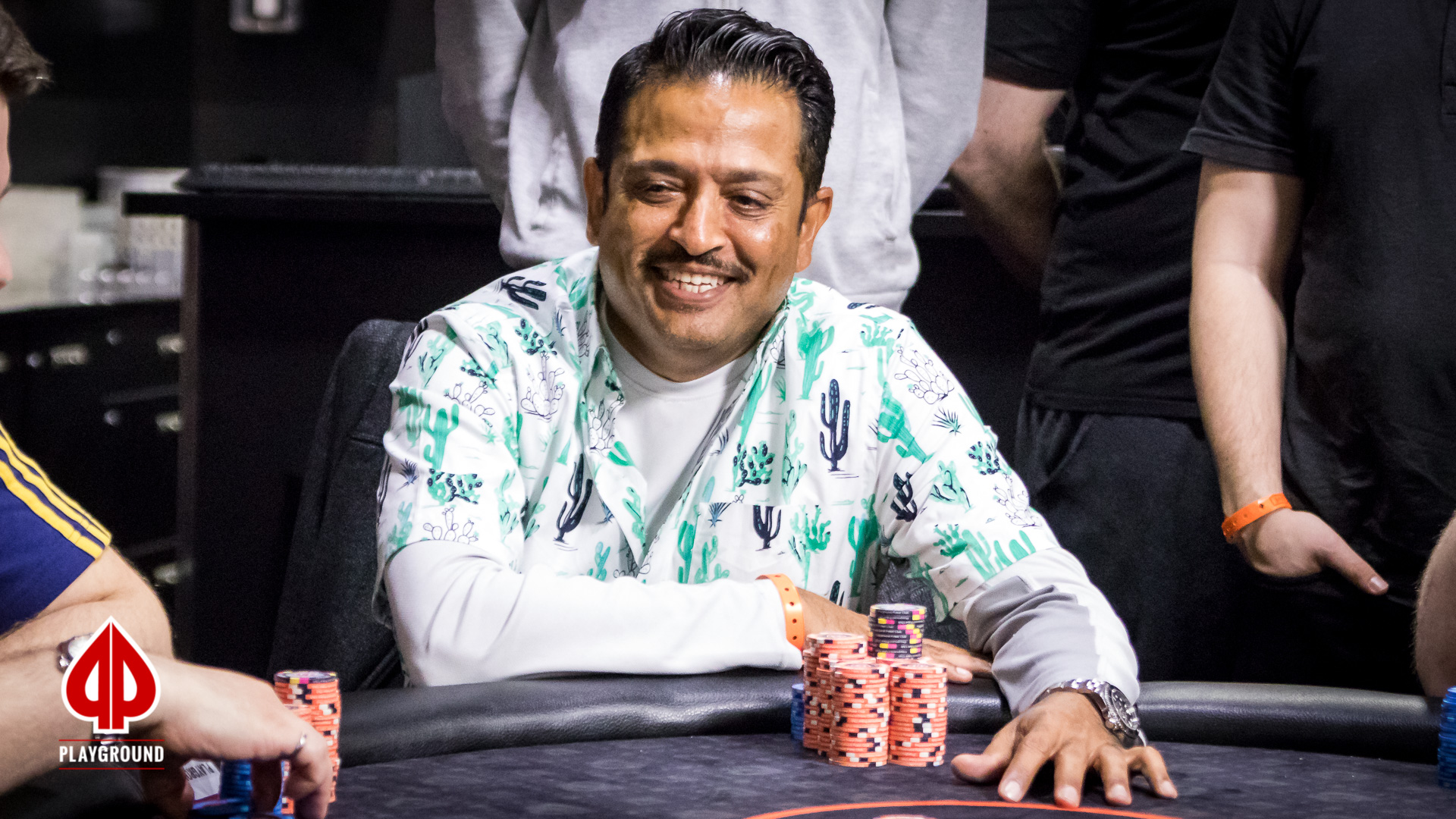 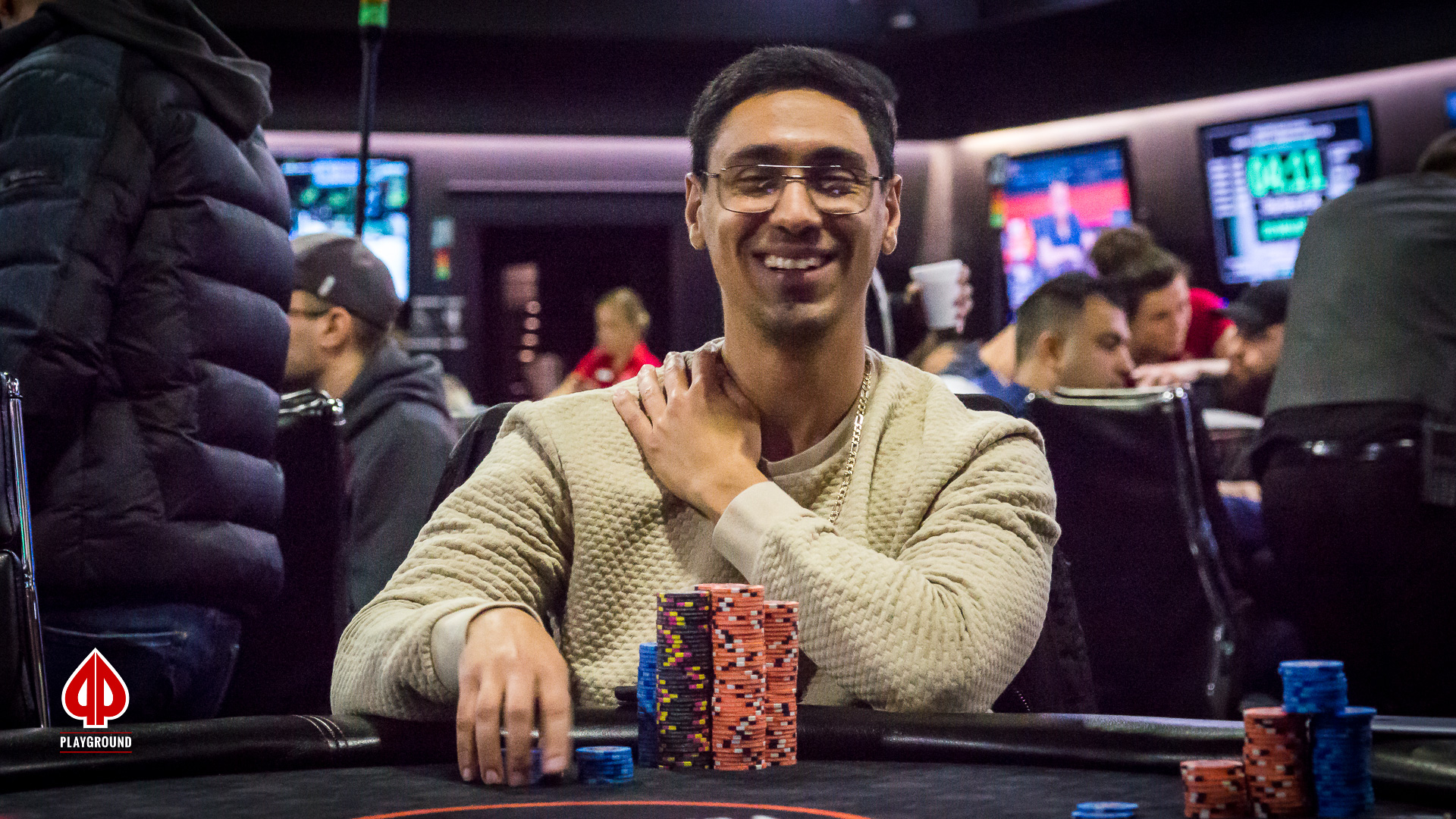 With 260 players left, just about 17% of the total field, things are heating up on all fronts.  Here are a few photos of the players taken just before level 20.

After three levels of play, the players took a short break which allowed us to survey the field. The bar was set at a cool ten million chips in order to make the first leaderboard of the evening.

Adil Morkos is the clear chip leader with 16,470,000, his closest rival is Bernard Harvey who is presently sitting on 15,120,000 chips. In all, 21 players have more than ten million chips and the heat is on!

The field has just passed under the 300 mark and there is still a lot of poker to be played before the players are in the money. This should happen before the end of the action today, since there are 188 places paid.

Play has just resumed and it will be very interesting to see if the leaders manage to hold on to their loot. 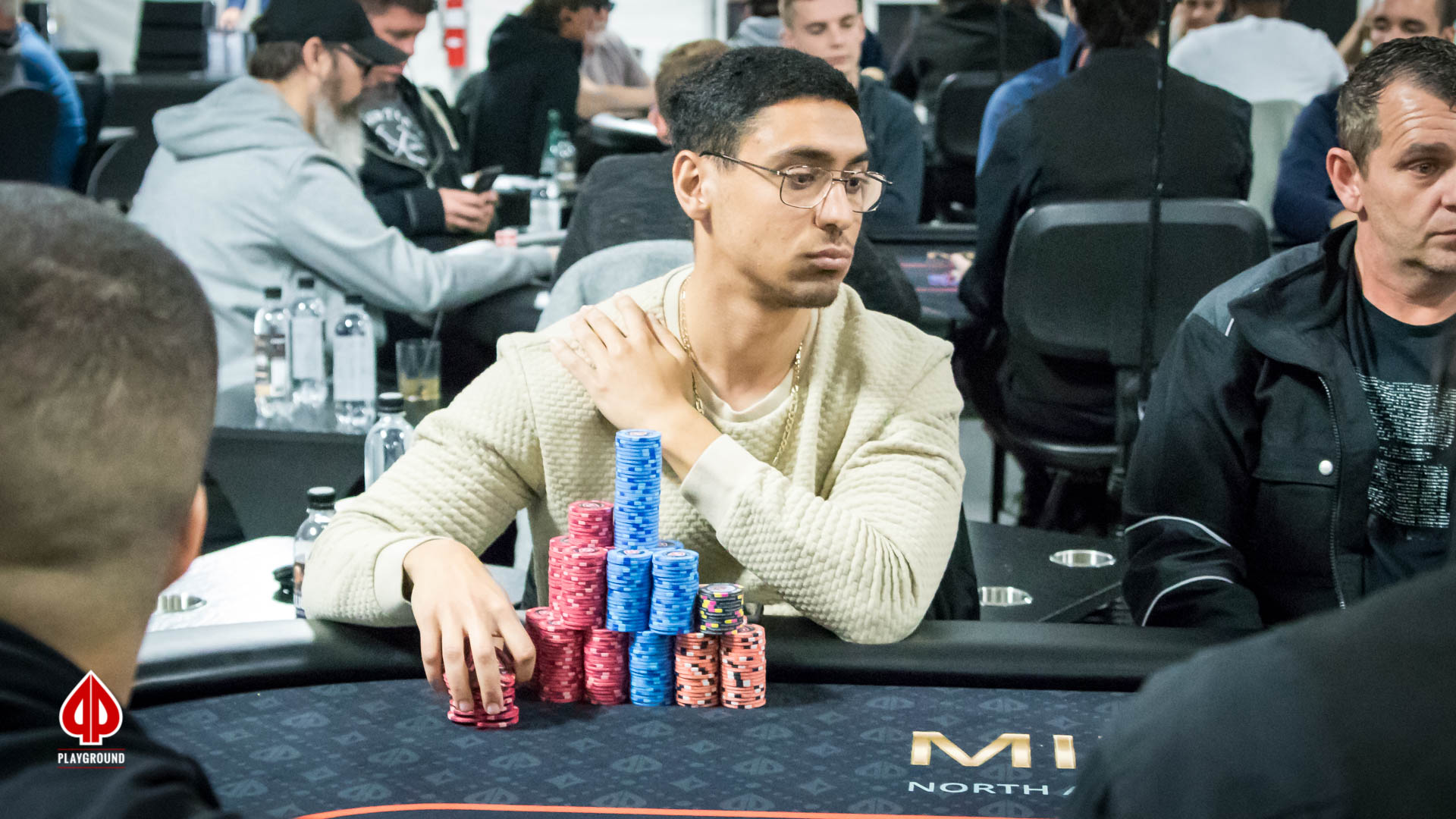 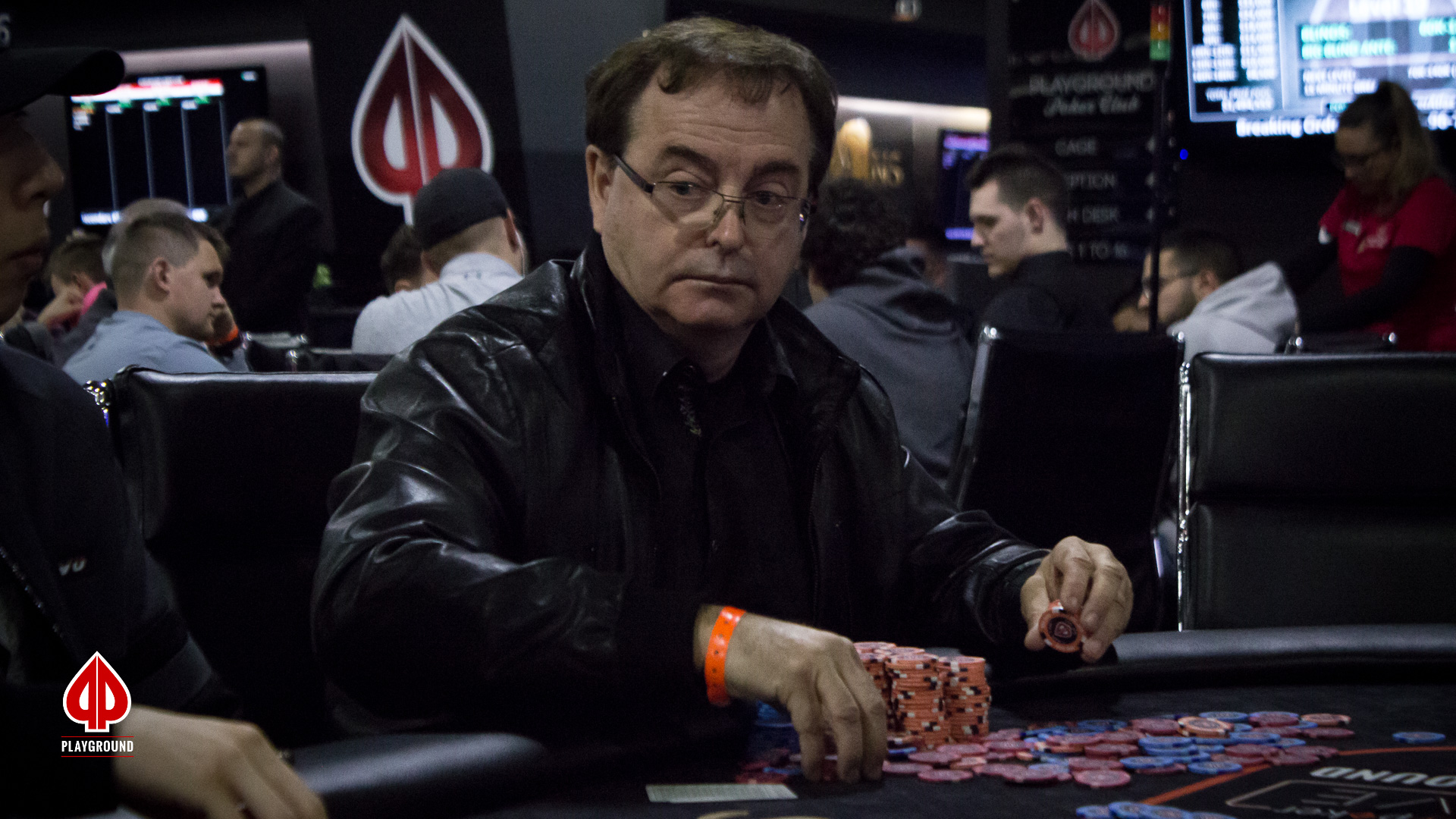 The action is fast paced and intense on the felts. Tournament personnel can be seen breaking tables one after the other and there is no doubt that everyone has their eye on the top prize!

Here are a few photos of the players from level 17.

The action is spread all over the Playground complex; every table in sight is full. Day 2 of the Montreal Open started with a huge crowd of 473 qualifiers, but, after only one 40-minute level of play, the field has been narrowed to less than 400 runners. Play will continue for a total of 12 levels today before the survivors bag chips for Day 3 tomorrow at 12:00pm.

The top 188 finishers will reach the cash in this event. Although the money is still far away, it is likely to be reached before things wrap up today.

Here is a look at some of the Day 2 field:

The room is buzzing with excitement, the cards and chips are flying and the players are settling down for a hard session of serious poker.

Here’s a recap of how things went down during the seven Day 1 flights for this event.

In total the Montreal Open attracted 1,536 entries and 473 players qualified for today’s Day 2.

Good luck to all and may the odds be ever in your favor! 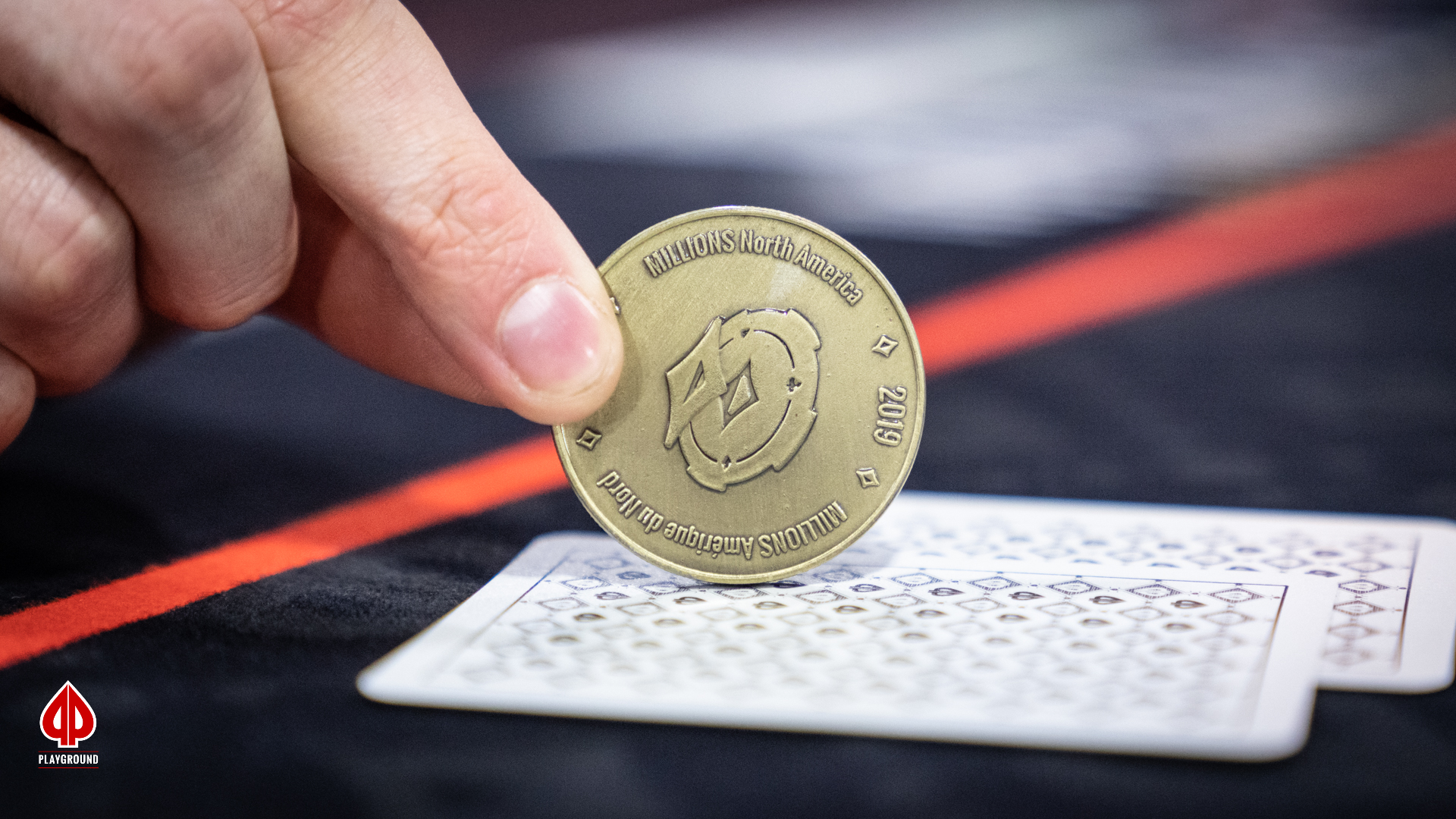