In brief, the action was fast paced, intense and steady. A lot of players went on a roller coaster ride but in the end managed to survive and were seen leaving the tournament hall with a smile on their faces. The happiest player is definitely Mario Dardis who managed to bag an impressive 11,790,000 chips. This performance places him in 2nd place overall, behind David Bolduc Hamel who bagged 13,865,000 on Day 1D. The second highest bagger tonight is Cheathta Ros, who had a steady run tonight and dropped 7,860,000 chips in his own bag.

It’s been a wild ride all week for the Montreal Open Day 1’s. After six flights and 1345 entries, 397 players have bagged chips for Day 2. To see the combined Day 1 results, click here.

The qualifying players will return Monday May 20, at 3:30pm when play resumes for 12 levels of 40 minutes. Day 1G, the last flight of Day 1’s for the Montreal Open gets underway Monday, May 20th at 10:00am. Blinds will go up every 15 minutes for this turbo flight. 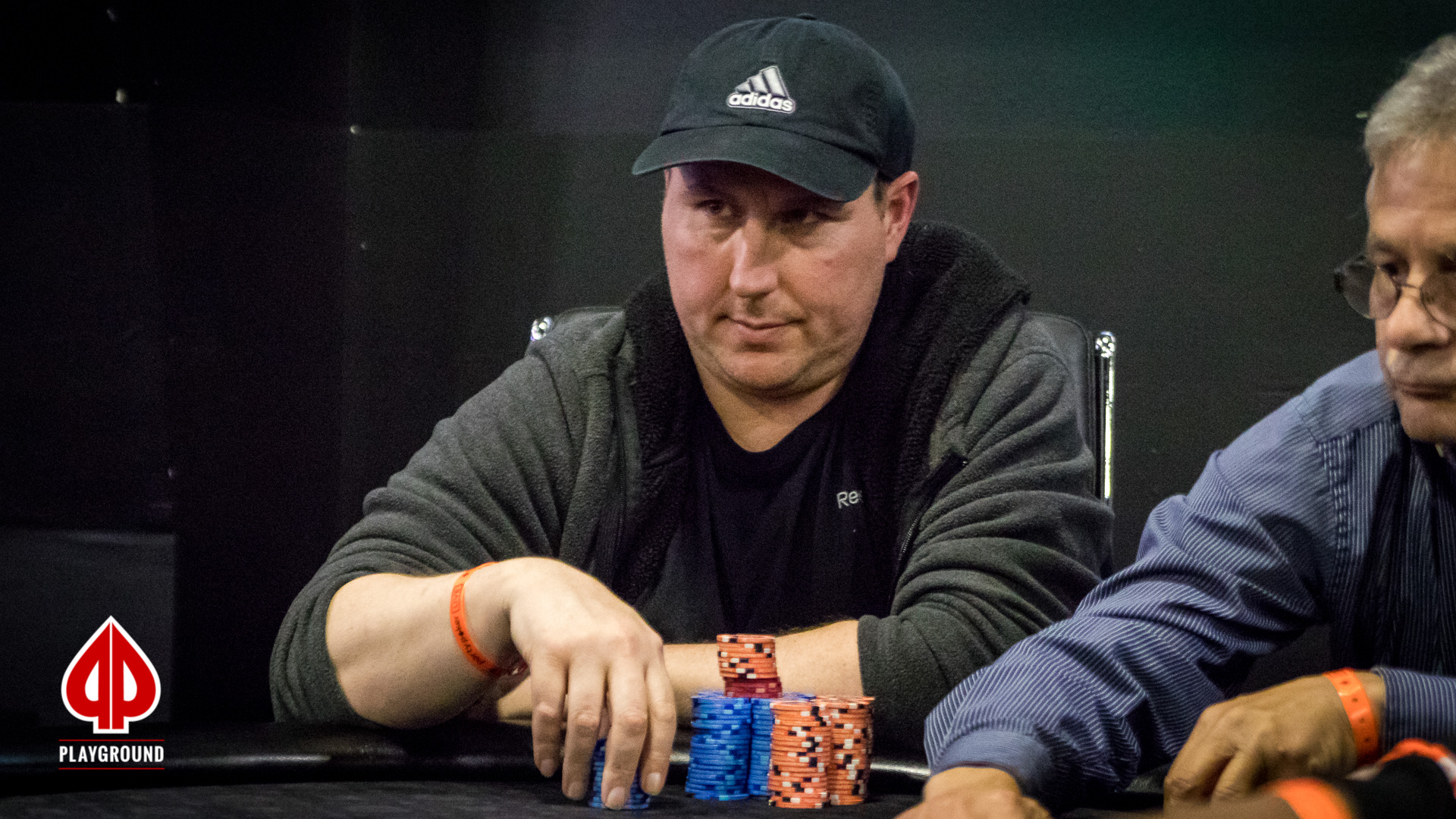 Things are moving along at a brisk pace and the numbers are shrinking. There are now 100 players left as the flight heads into level 15.

The action is constant and the chip leaders on each table put the squeeze on the shorter stacks. With one hour left to play before the bags come out, it’s each man for himself.

Here are a few photos of the players from levels 13 and 14.

The remaining 122 players took a short break between levels 12 and 13 and are just getting back in their seats for the last stretch of the night. With a little more than half of the field eliminated, the action is getting tougher and more intense with each new bust out.

Faisal Al Qutub has managed to not only become the new chip leader, he now has more than triple the average stack. Nursing a 7,065,000 stack, he has a clear lead on his closest rivals. Cheathta Ros is still going strong and now has 5,470,000 chips in front of him. Bradley Phee and Hrair Yapoudjian remain on the leaderboard as well, along with George Biliouras, making his first appearance tonight, with a respectable 4,065,000 stack.

With two hours to go, everything is possible and it will be interesting to see who bags chips at the end of level 16. 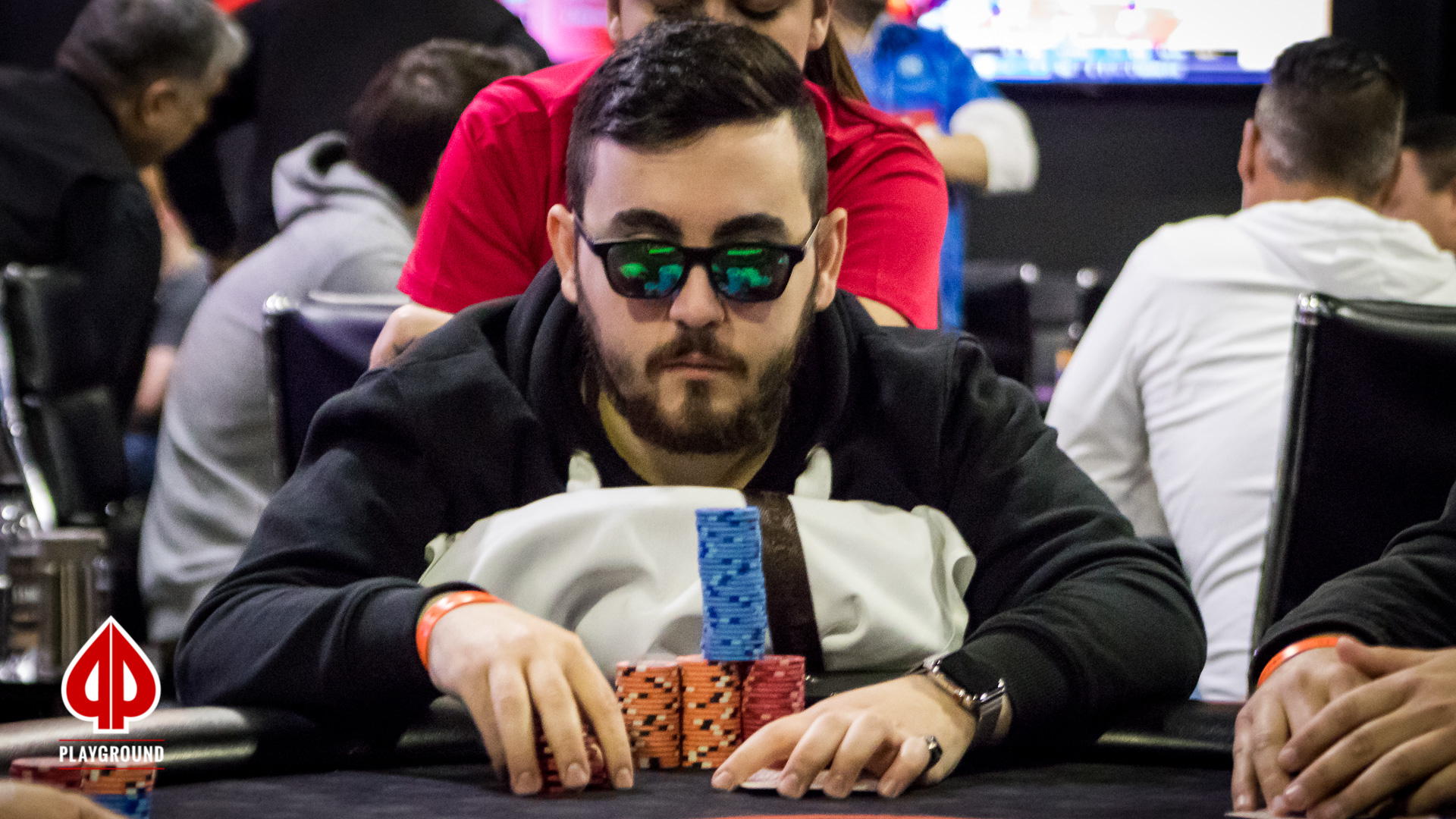 The registrations are closed for Day 1F of the Montreal Open. In total 255 entries were logged, including 29 re-entries.

Up to now and including this afternoon’s Day 1E flight, 1345 bullets were fired in an attempt to qualify for Day 2. Between them, flights Day 1A through Day 1E have seen 319 players qualify. To that number we will be adding tonight’s baggers, after level 16.

The field is shrinking at a steady pace right now, and Cheathta is in the lead after eight levels of play. With over twice the average with a stack of 3,850,000 Ros is definitely in a great position right now. The closest player behind Ros is Chawki Fawaz, who is the proud owner of 3,646,000 chips.

There is only one flight left for players wanting to get a piece of what promises to be a excellent prize pool. Day 1G gets underway tomorrow at 10:00am, this is a turbo flight with 15-minute blinds. 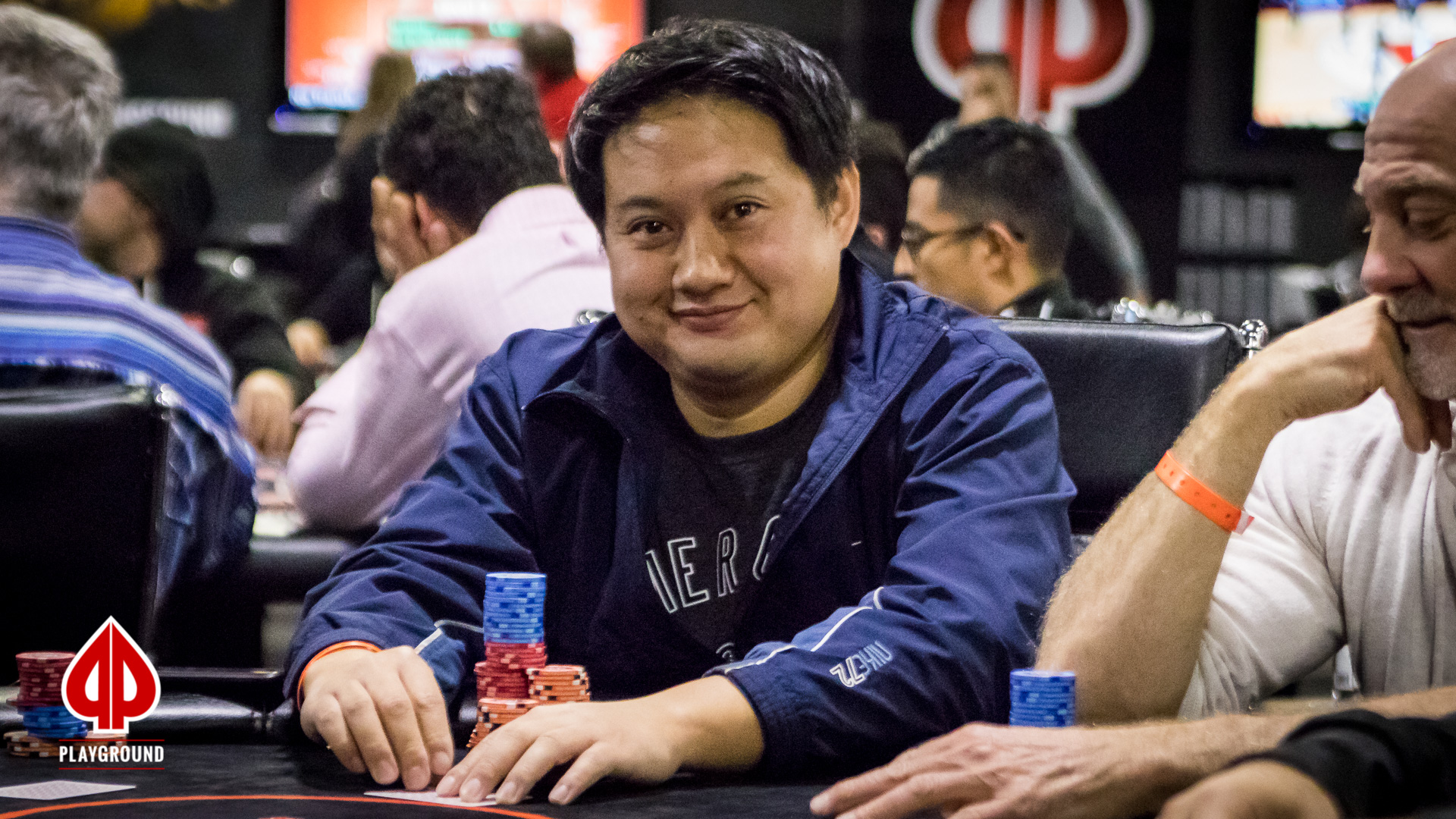 The tournament is halfway through level 7 and the clock shows 195 players in the field out of 236 entries, which includes 21 re-entries.

There is just under one hour left for late registrations and re-entries. The tournament hall is filled with the buzzing energy that usually accompanies the events at Playground poker. Chips shuffling, all in cards flying, the talented massage therapists and the army of lovely Rail restaurant waitresses as far as the eye can see. For any poker aficionado this is a sight to behold.

The players on table #19 are enjoying a treat matching wits against Maria Ho. The lovely Taiwanese-American poker player and television host/commentator is one of the top ranked female poker players in the world. The Women in Poker Hall of Fame inductee has amassed over $3,000,000 in live tournament winnings, has over 50 WSOP cashes, and and is presently ranked 401st on the all time money list.

Here are a few more photos of the players in action.

The clock is showing just about two hours of late registration possible. So far, 204 entries have been logged for this Day 1 flight, including 14 re-entries.

The heat is on, the action is serious and the chips are flying.

Here are a few photos of the players taken during levels 3 and 4.

After four levels of play, the players took a short break and we went chip hunting. With the chip average at 1,100,000 we chose players with two millions to make the leaderboard. 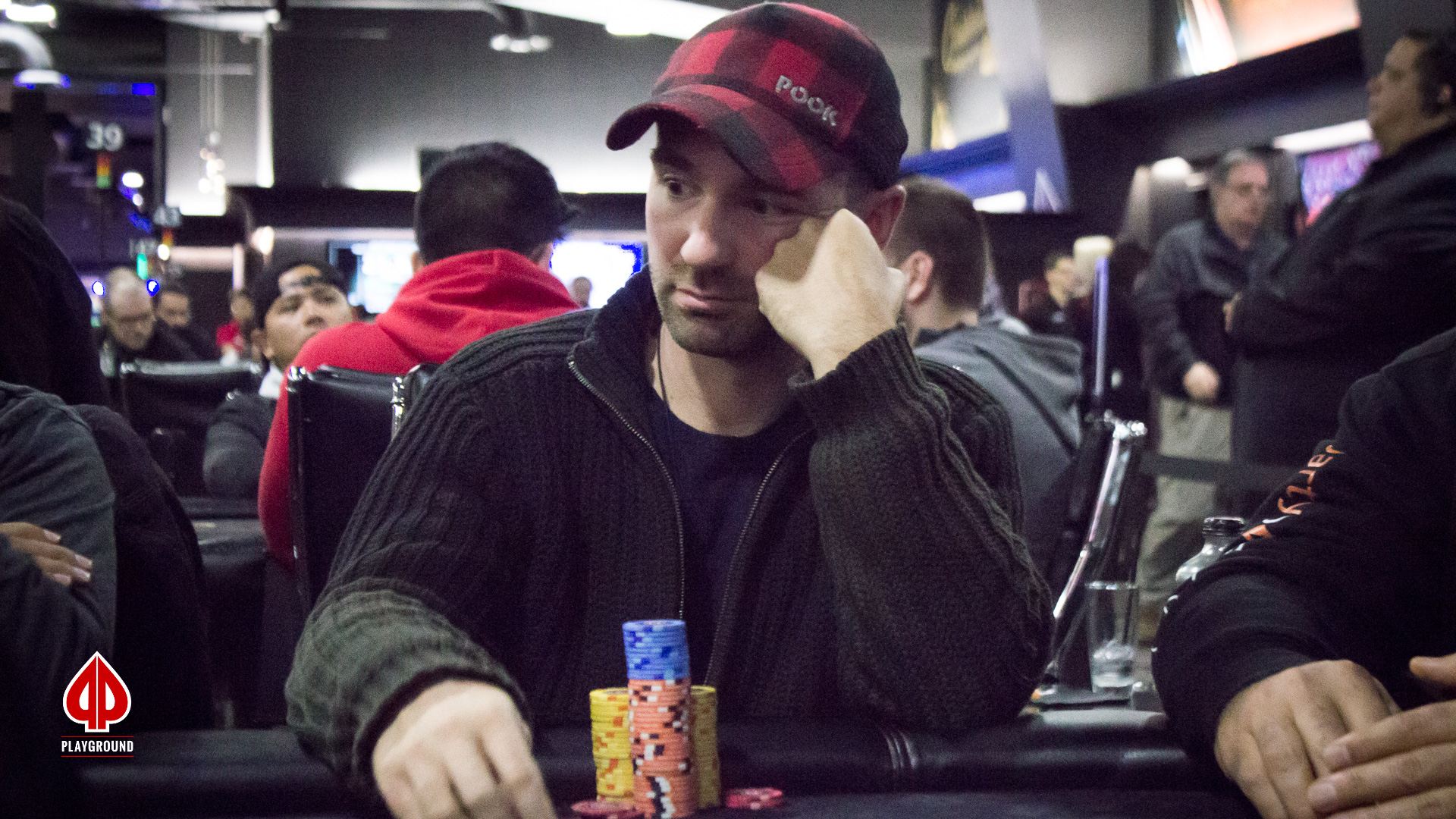 After two levels of play, there are already 136 entries«. The action is on and the players are in it to win. Quite a few players who have already qualified for Day 2 are seated at the tables, trying to bag bigger stacks. 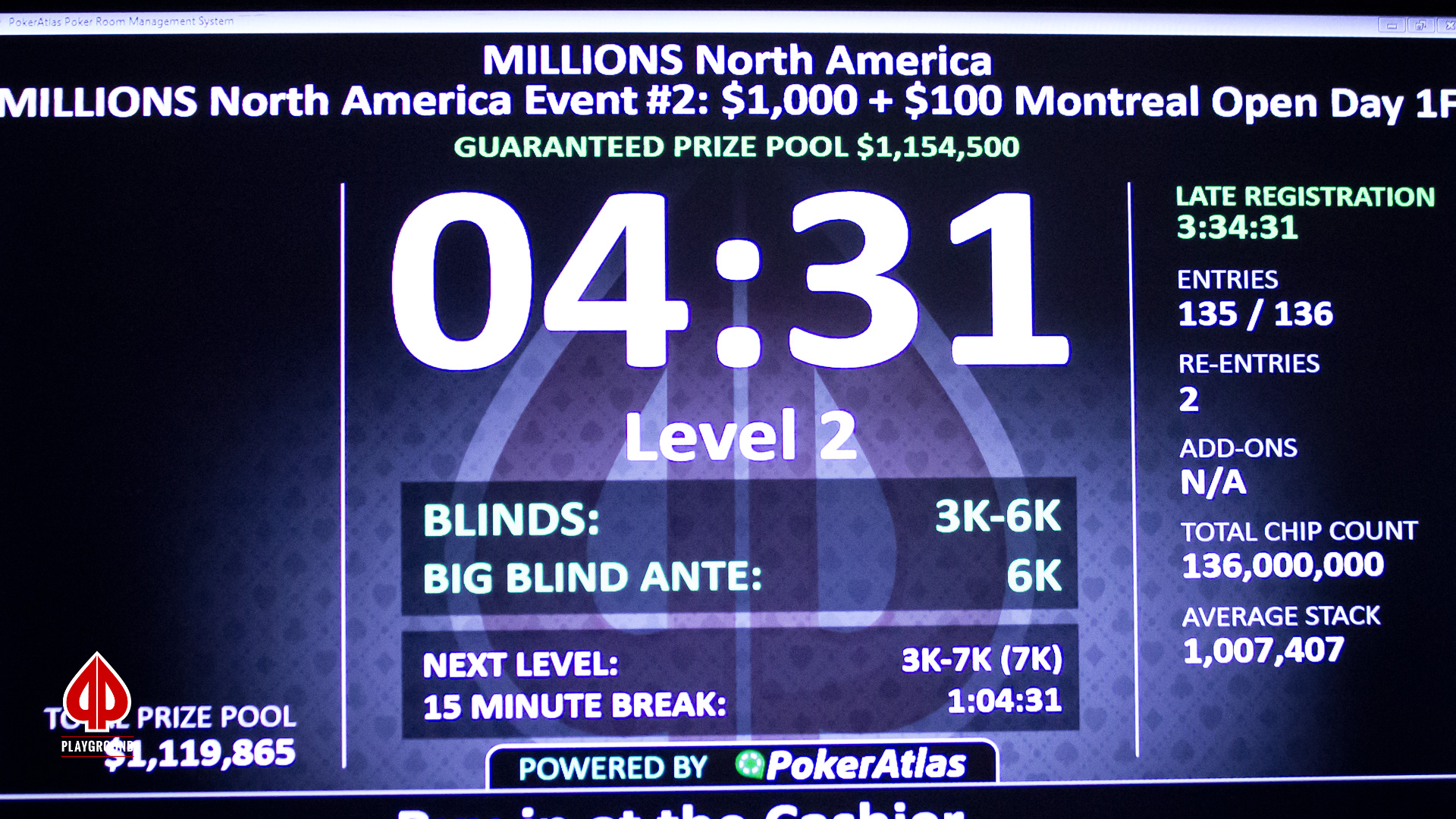 The Montreal Open has a massive prize pool guarantee! There will be at least $1,000,000 in cash awarded, as well as $10,000 + $300 seats to the Main Event given to the top 15 finishers when Day 3 play concludes on May 21. With four starting flights already in the books, there have been 754 Day 1 entries, and 209 players have advanced stacks to Day 2. This afternoon’s Day 1E is still in full swing and received 336 entries (with 44 re-entries), so expect the entries tonight to be big too.To see the combined Day 1 results, click here.

Players start each Day 1 with a stack of 1,000,000 in tournament chips and play 16 30-minute levels before bagging chips for Day 2. This is a re-entry event with unlimited re-entries permitted until the end of the late registration period at the beginning of level 9 on each Day 1. A player may play additional Day 1s even if he/she has survived a previous Day 1 with chips. Players who qualify for Day 2 more than once will resume play on Day 2 with their largest qualifying stack; all other qualifying stacks will be forfeited.

This event showed its popularity even before the first card was pitched, as the $150 + $15 turbo re-entry satellites for this event consistently surpassed their guarantees. The final satellite was held last night and more than doubled its 15-seat guarantee to put 33 more qualifiers into the Montreal Open. In all, 142 players qualified via satellite.

So get down to the tournament hall and get a piece of the action. Late registration is open until roughly 9:15pm.