After four Day 1 starting flights, with 1,102 entries in total, 277 players came back tonight to play Day 2, with the top 138 spots placing in the money. It took close to three hours to approach the money bubble, and almost another hour until the bubble burst. Once the players were in the money, the bustouts happened one after the other, with short stacks shoving away, trying to double their stacks so that they could have a chance of making it to Day 3.

It took some time until the first player made it over the 1 million mark, until finally the chip leader from Day 1A, Marc Bourgeois, was back in the lead with the first million+ stack. The lead started to change hands quite a few times, as there were some battles of the big stacks taking place. As the tournament went into the last hour of play, the action became more cautious, as everyone wanted to come back for Day 3.

On table 32, one player, Carlos Gerones, started to chip up nicely, and then after making a double elimination, he became the massive chip leader, and, the only player to go north of 2 million chips. He maintained the lead and ended up bagging the top stack, an impressive 2,995,000, double the second place finisher. Marc Bourgeois was able to bag 670,000, and Day 2 chip leader Shijaudin Daud Sha finished the evening with exactly 600,000.

Here is the list of all players who bagged 1 million+:

The full updated chip stacks and table and seating draw will be published here on Friday morning.

Here is a photo of the Day 3 chip leader, Carlos Gerones: 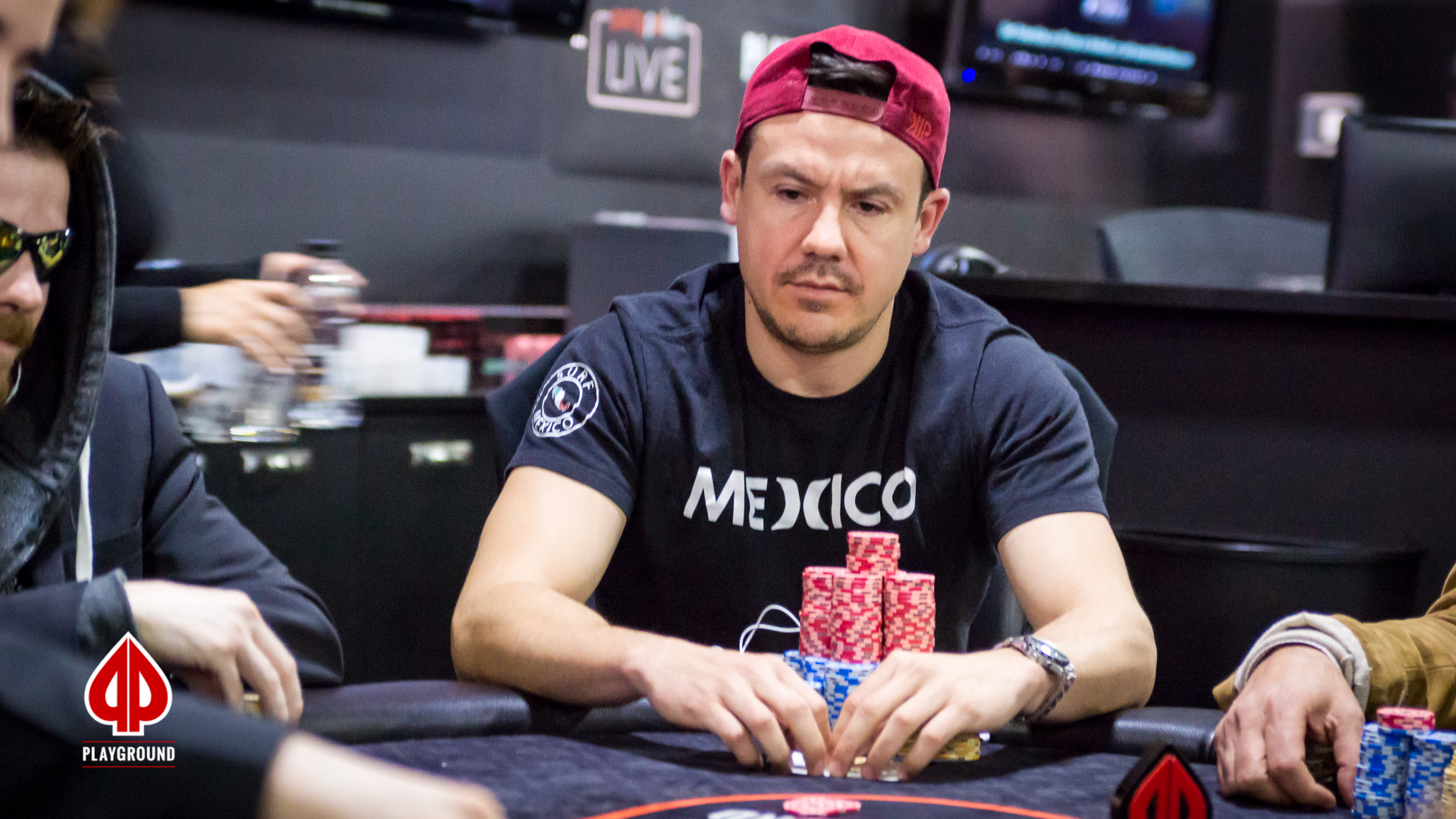 A few of the other players who will be returning for Day 3:

The battle is heating up. There are now only 56 players still in their seats, and with an average stack just around 490,000, there are now quite a few big stacks in the room. The next payout is only $650, and of course everyone wants the top prize of $36,128, or, at least a deep run into Day 3 and a final table finish, so no one wants to be the next to head to the rail.

Two players are nursing stacks above 1 million, Jean-Francois Lescadres is on top with 1,125,000, and sitting on the same table is Yirui Zhang with 1,080,000.  There are many other solid stacks in play, including George Caragiorgas, a very accomplished tournament player, and a few others with solid resumes, so it will be interesting to see how the final levels play out.

Here are the top stacks in play at the final break:

Below are the two millionaires sitting on the same table:

Marc Bourgeois, who was the chip leader of Day 1A has officially become the first millionaire, amassing an outstanding 1,042,000 chips.  Marc is a confident player and likes to wait for key spots, and does not usually spew away chips , so he will try his best to hold onto his stack and to let it continue to grow.

Mathew Wilkens keeps chipping up as well and follows in second place. There are still quite a few other skilled players left in the field, including Shijaudin Daud Sha (the over all leader coming in to Day 2), as well as almost all of the players from the first break leaderboard, so the numbers are sure to keep changing.

Here are the top stacks currently in play: 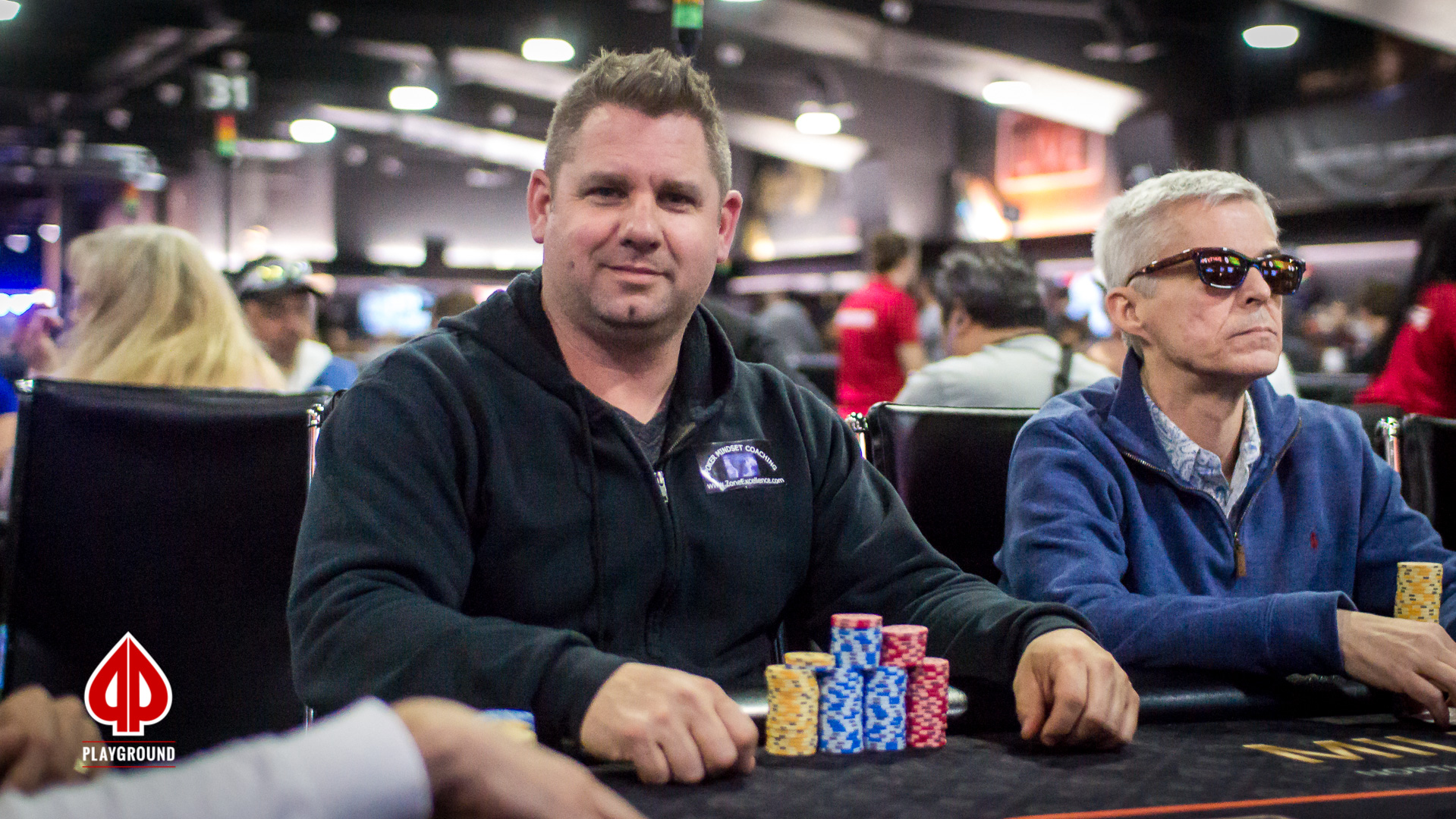 The bustouts came fast and furious once the bubble burst. Short stacks were shoving on every table, and players were seen headed to the tournament desk to collect their payout ticket and head to the cage.

The players are about to go on another fifteen minute break and we will look for the big stacks in play and update the leaderboard after the break.

With 140 players left in the room, and 138 scheduled to get paid, the tournament staff paused the clock and had the dealers wait to deal as the tournament went “hand-for-hand”.  It took almost 25 minutes for the first bustout to take place, which happened on table 23.  Tai Sum was down to 10 bigs when he looked down at

, and he couldn’t have been any happier, knowing he had one of the top hands in tournament poker. Action folded to Michael Khan in the small blind, who shoved to isolate.  Michael was holding

, and with his 400,000+ stack, he felt pretty confident that it was the right move. The big blind folded.

Tai was stoked to see that he was out in front, at least for now. Once the floor gave the dealer the go ahead to spread out a board, the dealer fanned out the most disastrous flop possible for Sum.

, givng Michael trip Q’s. There was still hope for Sum as tournament players know, there is almost always a sweat; he just needed a 10 to make broadway.
Turn:

Sum just shook his head as he exited the tournament in 140th position.

The tournament was now on the stone cold bubble. It took another five to ten minutes until the bubble hand was dealt on table 32. Sebastien Laviolette looked down at

and moved his chips (about 97,000) into the middle. Action folded to Samuel Charpentier, who thought about it for a moment and then decided to flat call. Everyone else moved out of the way.

and Samuel had hit his ace to move out in front. The

on the river were of no help to Sebastien, who needed a 9 to stay alive.

Sebastien exited as the Event #1 bubble boy, and just like that, the rest of the players were in the money.

The bustouts have kept a steady pace and the tournament is now close to the money bubble. There are 143 players still in the running with the top 138 getting paid, so the action will most likely slow down now until the bubble is burst.

There are some nice stacks in play, but one player, Carlos Gerones, has taken the lead with 687,000 chips. Edet Umoh follows in second place, sitting on 608,000. Below are the top eight stacks currently in play: 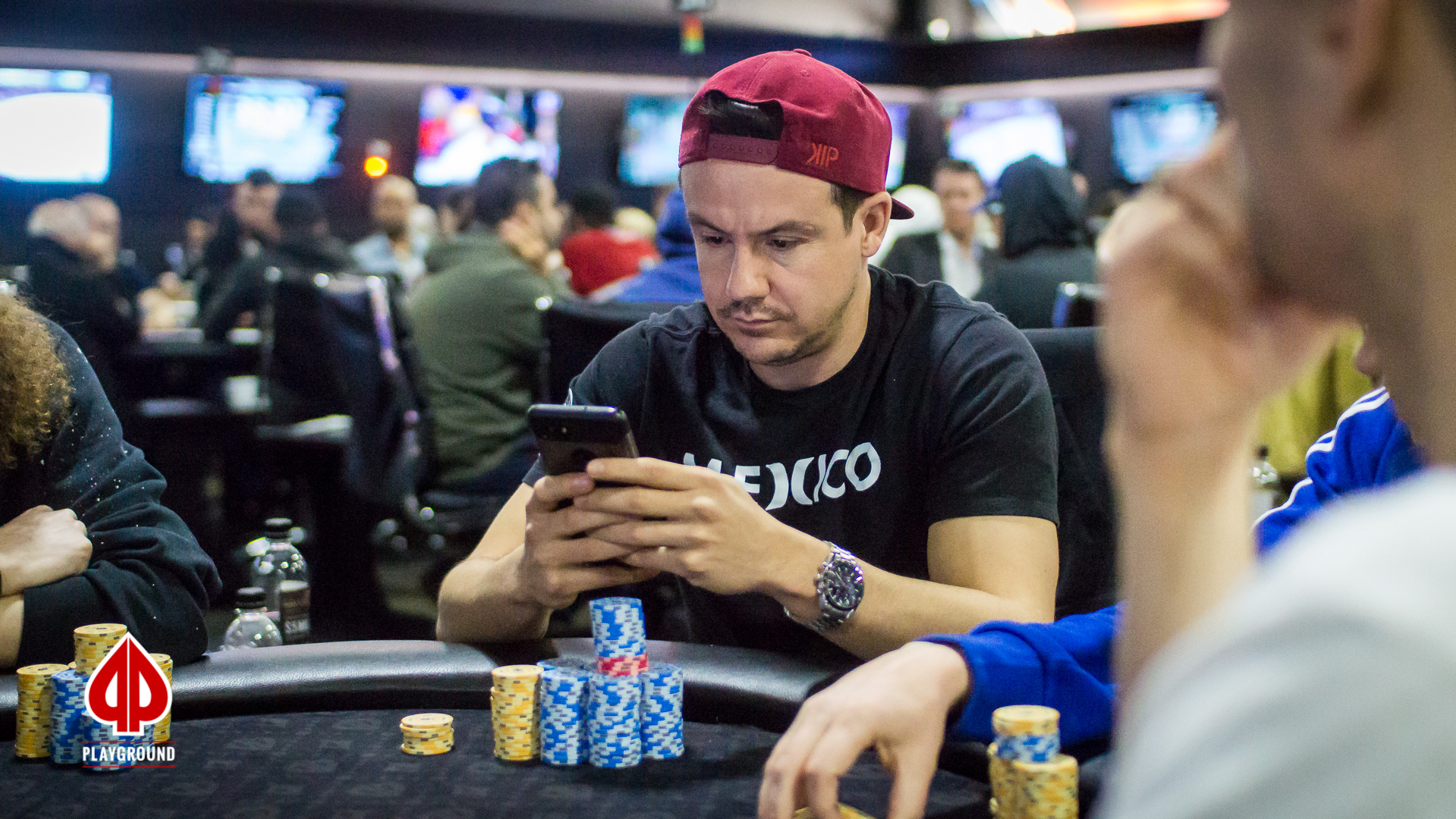 The action started right from the very first hand, with many of the short stacks getting the chips into the middle, hoping for a badly needed double-up.  The tournament is now down to 183 players and at this pace, with payouts starting in 138th position, the tournament should be in the money sometime in next few hours.

Some of the recent players who have been sent to the rail include: Sebastien Soares, Michael Trembley, Mitchell Besharah, Richard Figiel, Daniel Le, Andy “coach” D’Alessandro, and Mitcheal Ferguson, to just name a few.

Here are some of the players that have been grinding it out on the felt:

Player’s will play through 10 levels of 40 minute each, and when it is all said and done, the the remaining finalists will return for Day 3 tomorrow night at 7:00pm to play down to a winner.

The floor has announced “Dealers, shuffle up and deal”…and the cards are in the air! 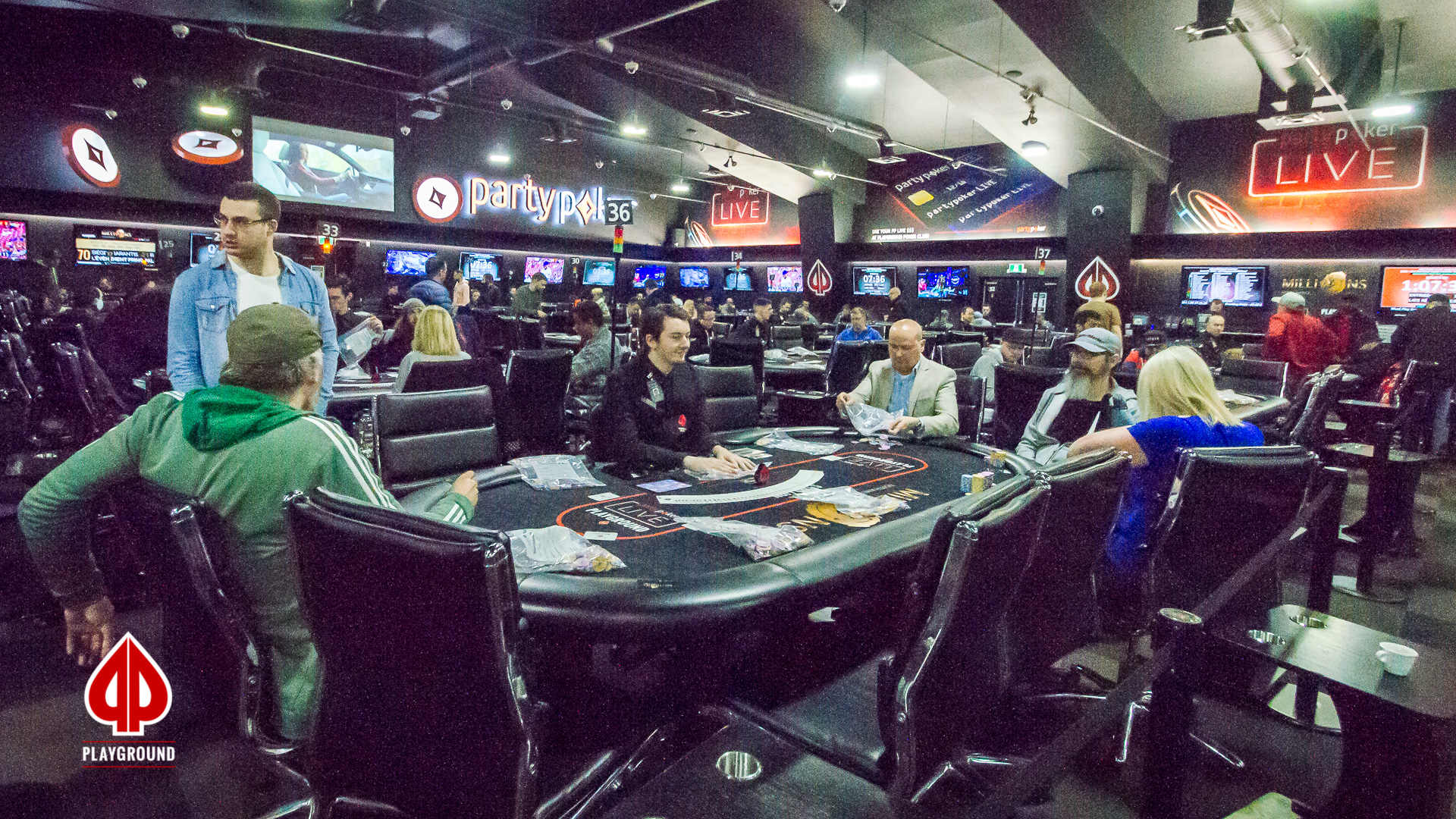 Event #1 of the MILLIONS North America, the Playground 200, kicked this festival off with a bang, attracting 1,102 entries across four starting flights. A total of 277 players bagged chips from various Day 1s, and they will return this evening at 7:00pm to compete for a share of the $213,788 prize pool. For the full prize pool breakdown, click here.

When play resumes, the Day 2 qualifiers will be seated according to the following table:

Event #1 of the MILLIONS North America, the $200 + $20 Playground 200, featured four starting flights that attracted a total of 1,102 entries. This huge turnout built a prize pool of $213,788 that will distributed to the top 138 finishers according to the following table: