It’s been a long night for the 66 players that have managed to hang on to their seats throughout 14 levels of play tonight. They will join the 65 players who have already qualified for Day 2 in yesterday’s Day 1A.

It was a grueling evening of unforgiving and aggressive poker. The players meant business and were hungry to bag as many chips as possible for what promises to be a huge turnout for this first tournament of the MILLIONS North America Event.

When the clock stopped and all was said and done, the boards were showing an average stack of 95K. This makes chip leader Yirui Zhang’s 311,000 stack a pretty impressive achievement. Zhang is also the only player to have bagged more than 300,000 chips tonight. Behind Yirui, there are three players above the 200K mark: Scott David Hite (288,000), Rasvan Rimniceanu (233,000) and Michael Khan (216,000). Nghi Van Tran, who was among the chip leaders all night, bagged a respectable 157,500 chips.

Players have two more chances to fire bullets in Day 1 flights for this event, both of which are tomorrow:

A combined list of all qualified players for Day 2 of the Playground 200 can be found here.

The players took their last break of the evening and we once again went in search for the leaders.

Francis Larose and Micheal Khan are in the lead, and the only players with more than 200,000 chips. Making his third appearance in as many leaderboards, Nghi Van Tran is close behind. Tran has been consistently among the leaders all night. Bringing up the rear are Dave Dupont-Rivard and Sarvesh Pershad.

There are a little more than two levels left before the bags come out. The action is steady and constant, with the bigger stacks putting a lot of pressure on the smaller stacks, forcing them to commit a lot of chips to the pot in order to see flops. Each decision counts and players need to weigh carefully the pros and cons between getting chips to move on, and gambling precarious positions that put them at risk of heading to the rail. Only time will tell… 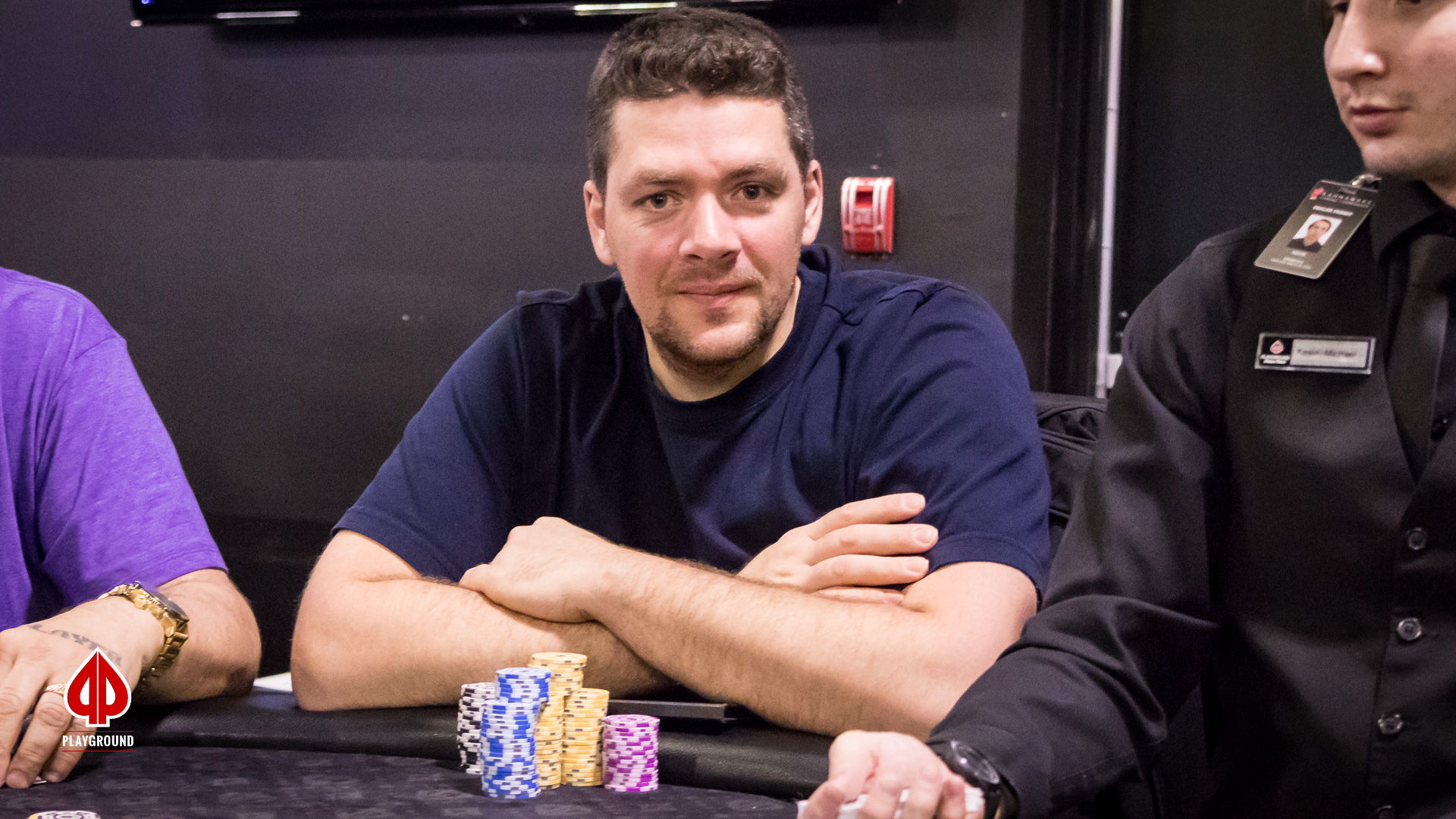 The field is now down to half it’s size as the tournament heads into level 10. The balance of power is shifting constantly and it will be very interesting to see where the chips end up at the end of level 14.

All the players that are still in at the end of level 14 will get a much-coveted bag to bring their chips into Day 2. Last night, 65 players received a bag, out of 275 entries. Players will return on Thursday May 16th, at 7:00pm for Day 2.

Here are a few things to keep in mind: There will be a full seating redraw for the start of Day 2, which will play 10 levels of 30 minutes. A player may elect to play additional Day 1s even if he/she has survived a previous Day 1 with chips. Players who qualify for Day 2 more than once, will resume play on Day 2 with their largest qualifying stack; all other qualifying stacks will be forfeited.

Here a few more photos of the players taken from levels 8 and 9:

The players took a break between levels 8 and 9, which allowed the tournament personnel to remove the green 25 chips from play. It also gave us the opportunity to update the leaderboard.

With almost half the field gone, we went searching for stacks above 120,000. Five players managed to grab that many chips, and sure enough, some familiar names made a second appearance among the leaders. Ernest Kelly has taken over the lead with 162,300 chips, and a new addition to the leaderboard is right behind him: Sarvesh Pershad, who is sitting on 158,800 chips and is breathing down Kelly’s neck. Nghi Van Tran is still on the board, but has dropped to fourth place with 128,200.

The eliminations are happening at a fast and steady pace, as the number of tables shrink and the hall quiets down. There are still 5 more levels to play after this one, and anything can happen. One thing is certain; with 6.3 million chips in play, expect the top bags to have sizable amounts at the end of the night. 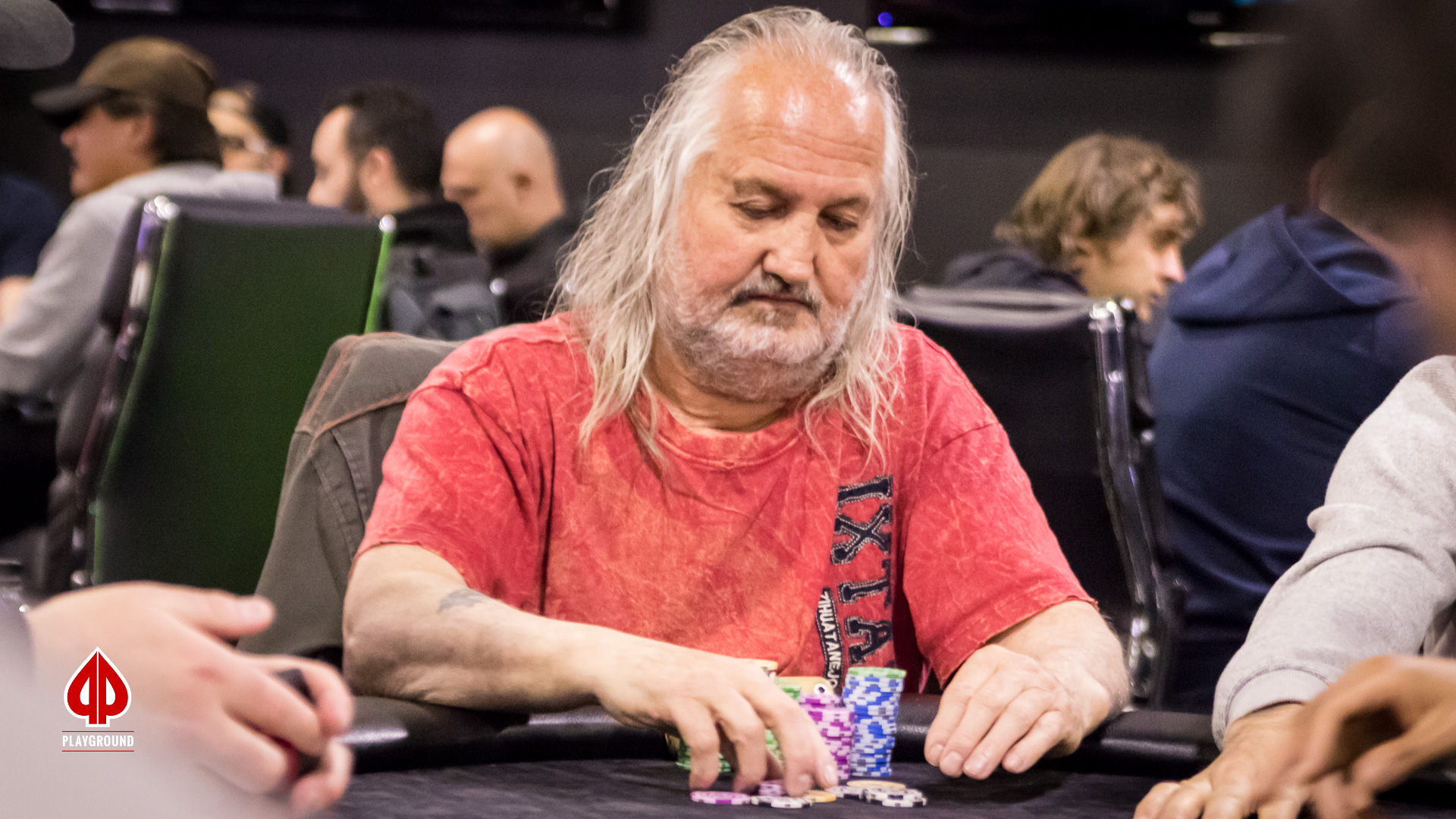 We arrived at Dany Noël’s table while he was deep in the tank and obviously struggling with a decision. On the table the flop was out:

Dany was facing an all-in from Brandon Quick, and both players seem to have approximately the same stack size. After a while Dany shrugged his shoulders and called, adding, “I don’t feel I can fold this”, and tabling rockets

– he had hit a set on the window. “I knew it”, mumbled Noël, “this keeps happening to me”.

The turn and river held no magic for Noël:

and he pushed his stack forward, ready to leave. The players at the table told him to wait, having obviously guessed that he would have chips left. After counting Quick’s all-in for 33,200 chips, the dealer pushed back the extra chips towards Noël. He was not eliminated but his stack was down to vapors.

A few hands later, Dany looked down to see a hopeful hand:

and pushed all-in from an early position preflop, with approximately 5,000 chips. Holding

As soon as the flop came out, Noël jumped out of his seat, ready to leave again:

. He looked up at the ceiling when the turn came:

, giving Boivin a straight, and crushing any hopes of a flush for Dany who was now drawing dead. The

on the river was a formality, and that was the end for Dany Noël, sent to the rail by Robert Boivin. 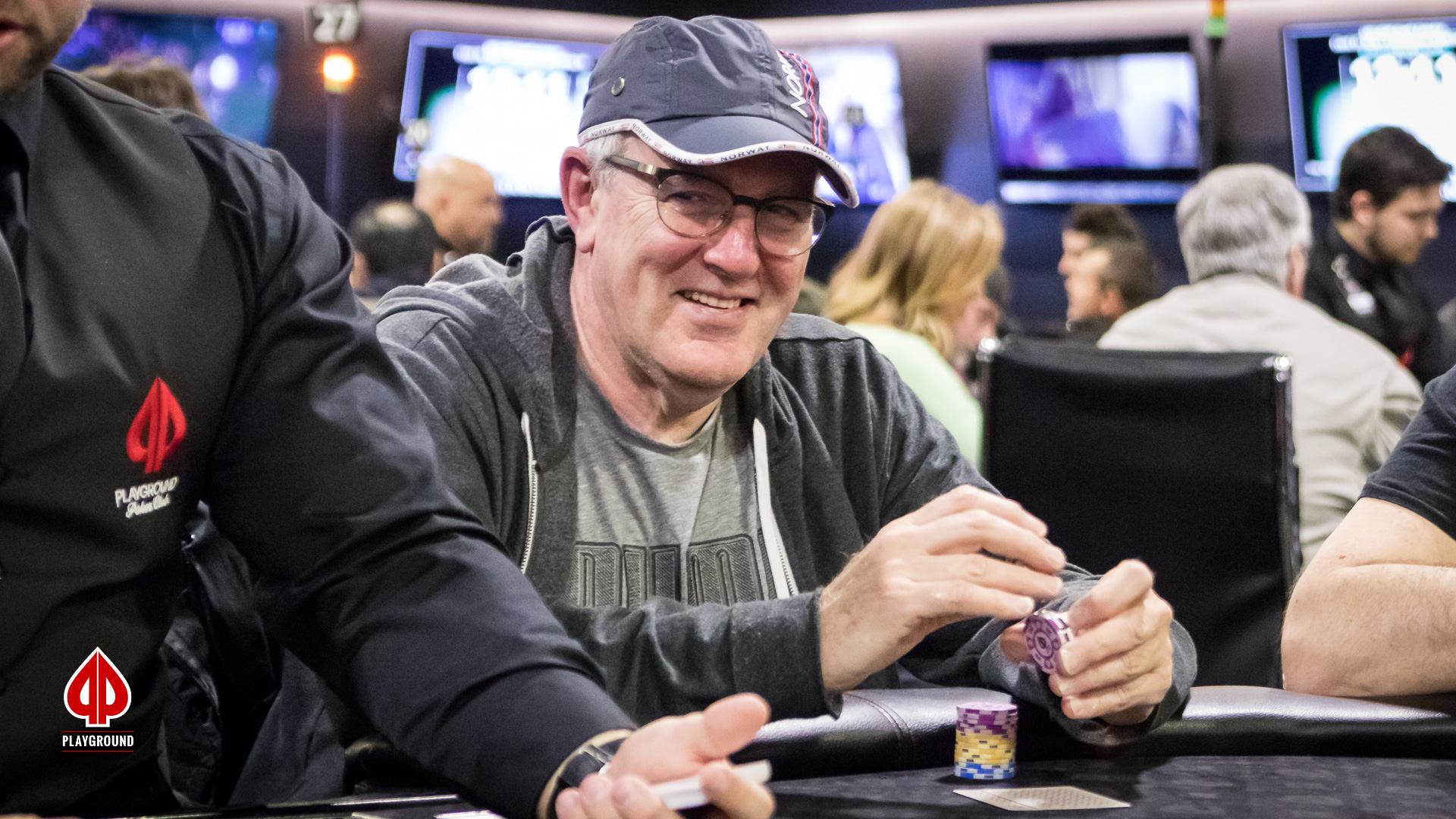 With the onset of level 7, the late registration has just closed. In total, no less than 252 entries made it to the boards (including 36 re-entries). Adding the 275 entries from yesterday’s Day 1A, this brings the total entries for the two starting flights to a whopping 527 entries, effectively surpassing the $100,000 guaranteed prize pool.

The action is intense among the 170 players left in the field, and the chips are changing hands at an impressive rate. There will be an updated leaderboard after level 9, when the players take another break. In the meantime, here are a few photos of the players, taken during levels 4 and 5.

The boards are now showing 234 entries (including 24 re-entries). With the 275 entries from Day 1A (yesterday), the guaranteed prize pool has officially been exceeded. There are still 45 minutes left in the late registration, and also two more Day 1’s left. This promises to be a huge turnout for the Playground 200.

After four levels, the players took a break, and it was the perfect time to survey where the chips lay.

It’s still very early, and with 5,775,000 chips in play, anything can happen between now and the end of level 14 when the bags come out, which should be around 2:45am. 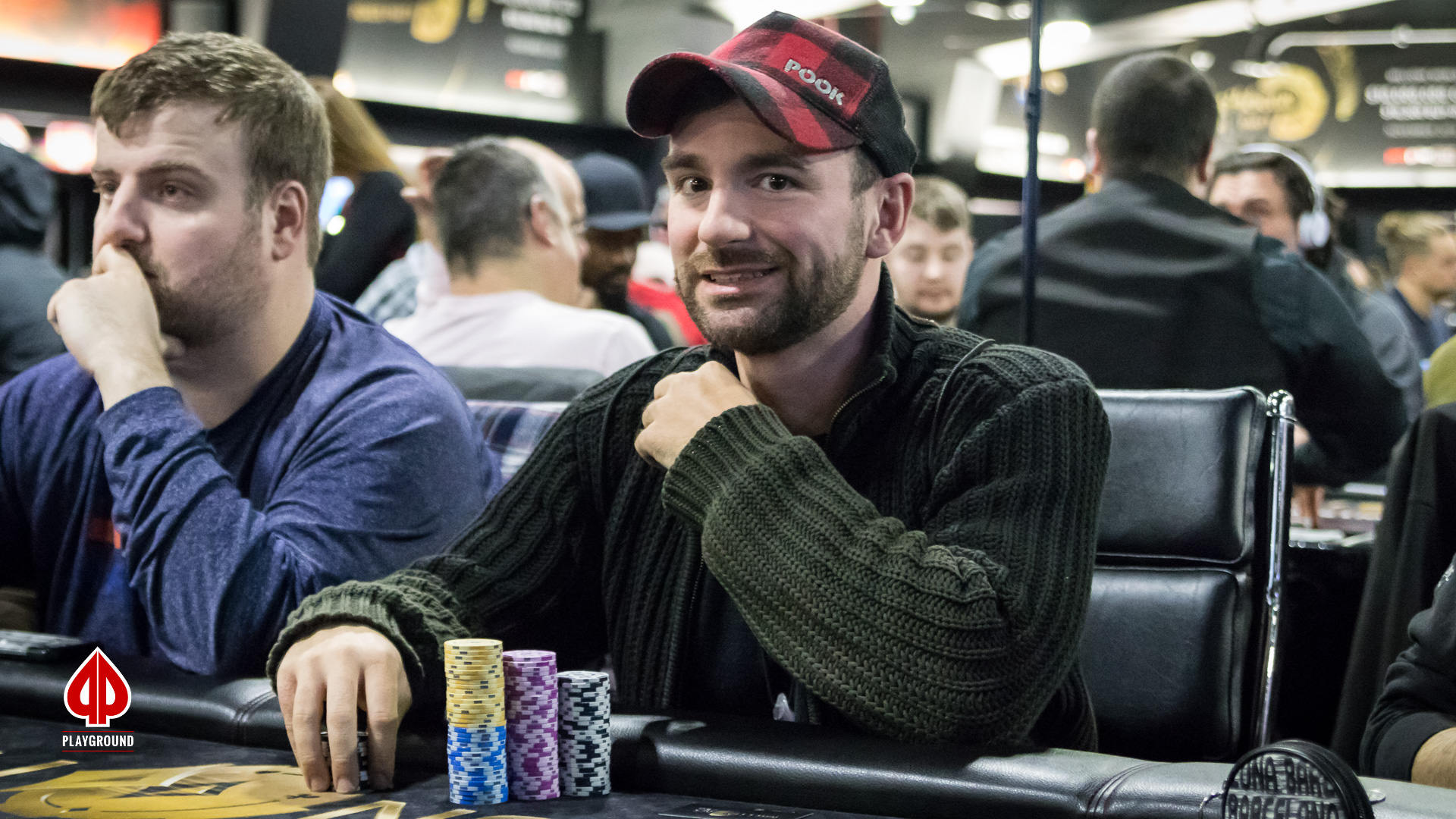 Day 1B is about halfway through the late registration period and the boards are showing more than 200 entries, including 9 re-entries. As expected, there is a huge turnout for the Playground 200, since players know that there will be a great prize pool for such a small buy-in.

With 275 entries last night and still two more Day 1’s to go after tonight’s flight, there is no doubt that the prize pool will far exceed the $100,000 guaranteed prize pool.

There is still lots of time to get into the action tonight. The late registration period is open until the beginning of level 7, which will be at 10:15pm.

Here are some photos of the players from levels 1 and 2.

Here it is folks, the Event #1 of the MILLIONS North America: the Playground 200 is finally here!

Event #1: $200 + $20 Playground 200, boasts a $100,000 Guaranteed prize pool. There are four Day 1 flights and tonight’s Day 1B takes off in a few minutes at 7:00pm. The $200 + $20 buy-in is the most affordable of all of the events and a great way for players to dive right into the action early on in the event series. A huge turnout is expected, and this translates to a very interesting prize pool for a relatively small buy-in.

At last night’s Day 1A, a total of 275 entries were tallied, which included 48 re-entries). Of those entries, 65 players qualified for Day 2. Marc Bourgeois was the top gun with an impressive 366,000 chips, after 14 levels of play. If the turnout last night is any indication, it’s quite possible that the entries tonight might already catapult the prize pool above the $100,000 guarantee.

This event has unlimited re-entries permitted until the end of the late registration period on each Day 1 starting flight. Players start with 25,000 chips, levels increase every 30 minutes and registrations or re-entries are possible until the beginning of level 7, at 10:15 pm.

There’s plenty of time to come down to Playground’s tournament hall and join the fun with the 100 players already seated. 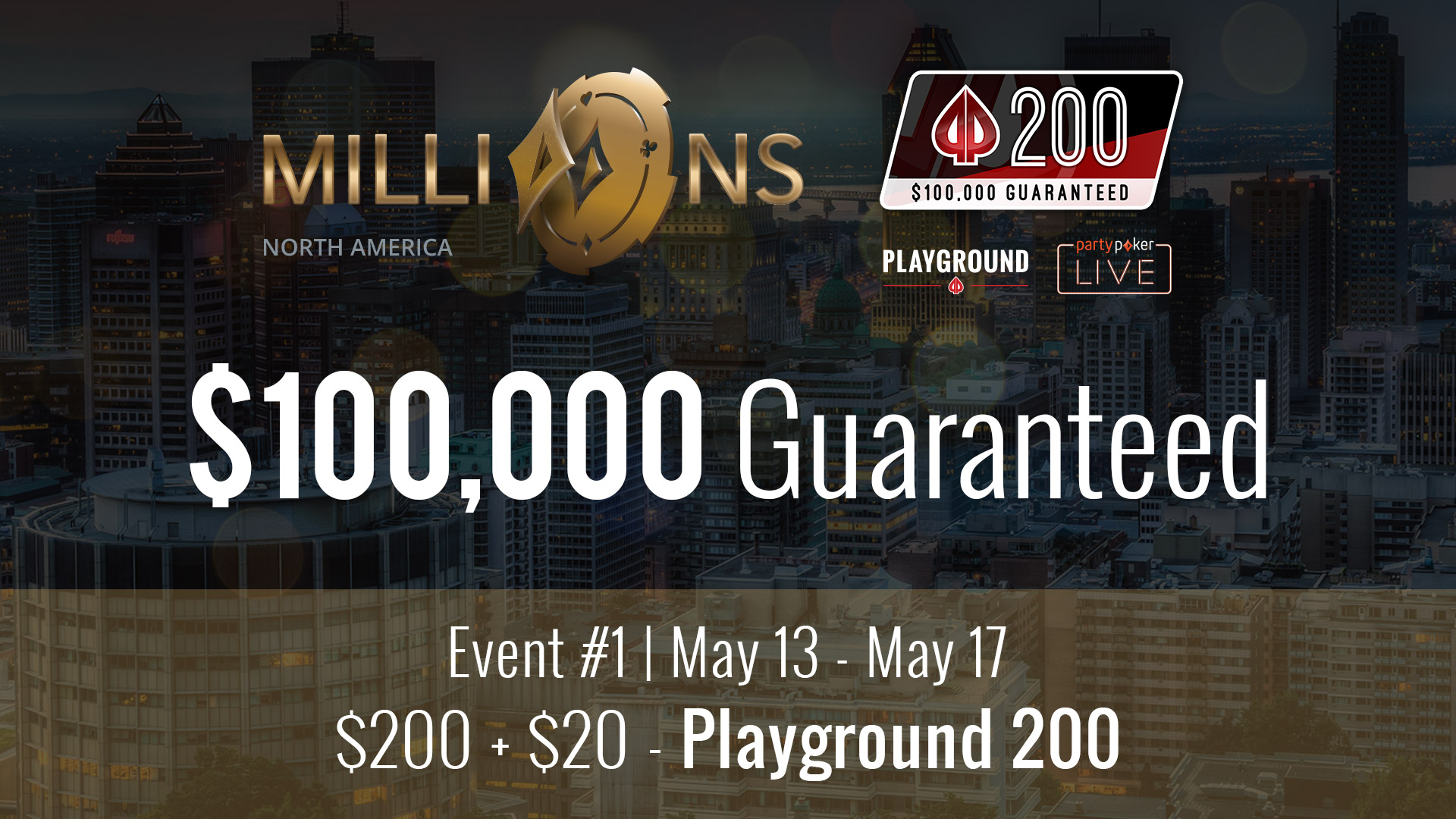