This marks not only the end of Day 1D of the $300 + $30 Closer, but also the end of all Day 1 flights for this event. Congratulations to all of our qualifiers – well done! You’ve all got a seat with your name on it reserved for Day 2, which will begin tomorrow at 1:00pm. Time to go get a good sleep, because it’s going to be a marathon tomorrow.

The player with the most chips this evening was Tyler Adams, whose 495,500 chips place him in 2nd on the overall leaderboard. He’s in great shape heading into tomorrow, and congratulations go out to him and all of our qualifiers for their excellent play over the last few days.

Day 1D’s 345 entries (including 101 re-entries) bring us up to a total of 1,091 for the event, helping it surpass the $300,000 guaranteed prize pool. Today’s 71 qualifiers will join their poker brothers and sisters to take a crack at the big money and the championship ring tomorrow, so make sure you don’t miss it. See you at the tables!

Below are photos of some of our other players with substantial finishing stacks.

Now in the middle of level 13 and with blinds at 1,000/2,000, the pressure is starting to build for some of our players with smaller stacks. On table 90 just now, one player in particular, Gurpreet Lubana, decided that it was now or never and time to shove.

After his neighbor on the right, Lorne Wechsler, bet 3,800, Gurpreet moved all-in for his last 15,000. Gurpreet had a

, and Lorne called with his

Miraculously for Gurpreet, the board was dealt a pure flush,

. The fortuitous board extended his play – for now. But with only a handful of blinds left, he’ll have to get even luckier to last all the way to the end of level 14.

The field is shrinking fast – we’ve already lost four more players in the time it took to upload this post!

The field has shrunk quite a bit since the last break, and we’re currently down to only 113 players. Considering that there were 345 entries, that’s quite a change from our last number check.

Still on top of the pile is Tyler Adams, who leveraged his earlier big win into even more chips. With 332,100, he has almost doubled his chip count from the last break and appears to be this flight’s player to beat. 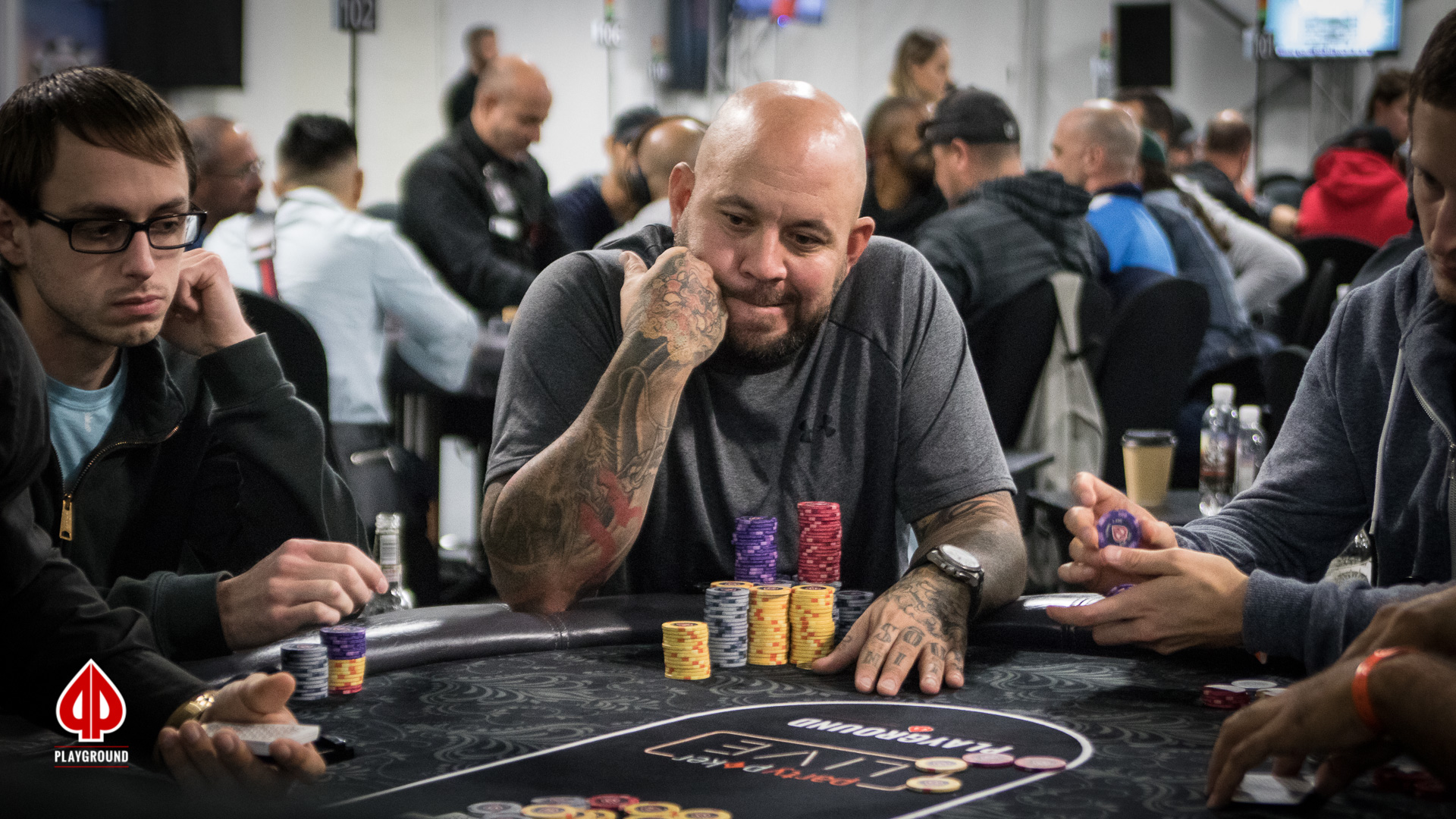 At table 96 just now there was a rare sight: eight players in a hand. It started when Christos Filandrianos limped in for 1,200. He was followed by practically the entire table.

The flop was dealt

. Eight checks later, the dealer flipped over the turn, a

. This time there were five checks, but sensing this was his moment, Jonathan English bet 5,000. That was enough to chase everyone except Valon Gruda, who called.

The river was a

, and Valon checked over to Jonathan. All he needed to do was casually splash 8,000 chips into the middle to take down the hand without showing his cards.

This evening’s flight was only two entries shy of being the largest of the four Day 1 flights, just a hair smaller than Day 1C, which started at noon. With a total of 692 combined entries throughout the day, this was hands down the biggest day so far for this event. There are lots of chips in play, with over 6,900,000 spread over the remaining tables, and the action is only heating up. Several players have re-entered more than three times each – they must really want their piece of the prize pool, not to mention that championship ring!

At this point, Tyler Adams leads the group, holding 178,500, more than quadruple the chip average. He gained most of his chips during the last hand of play in level eight. His backdoor flush surprised even him, and has put him way out front. We’ll see if his luck can hold as we make our way to the Day 2. 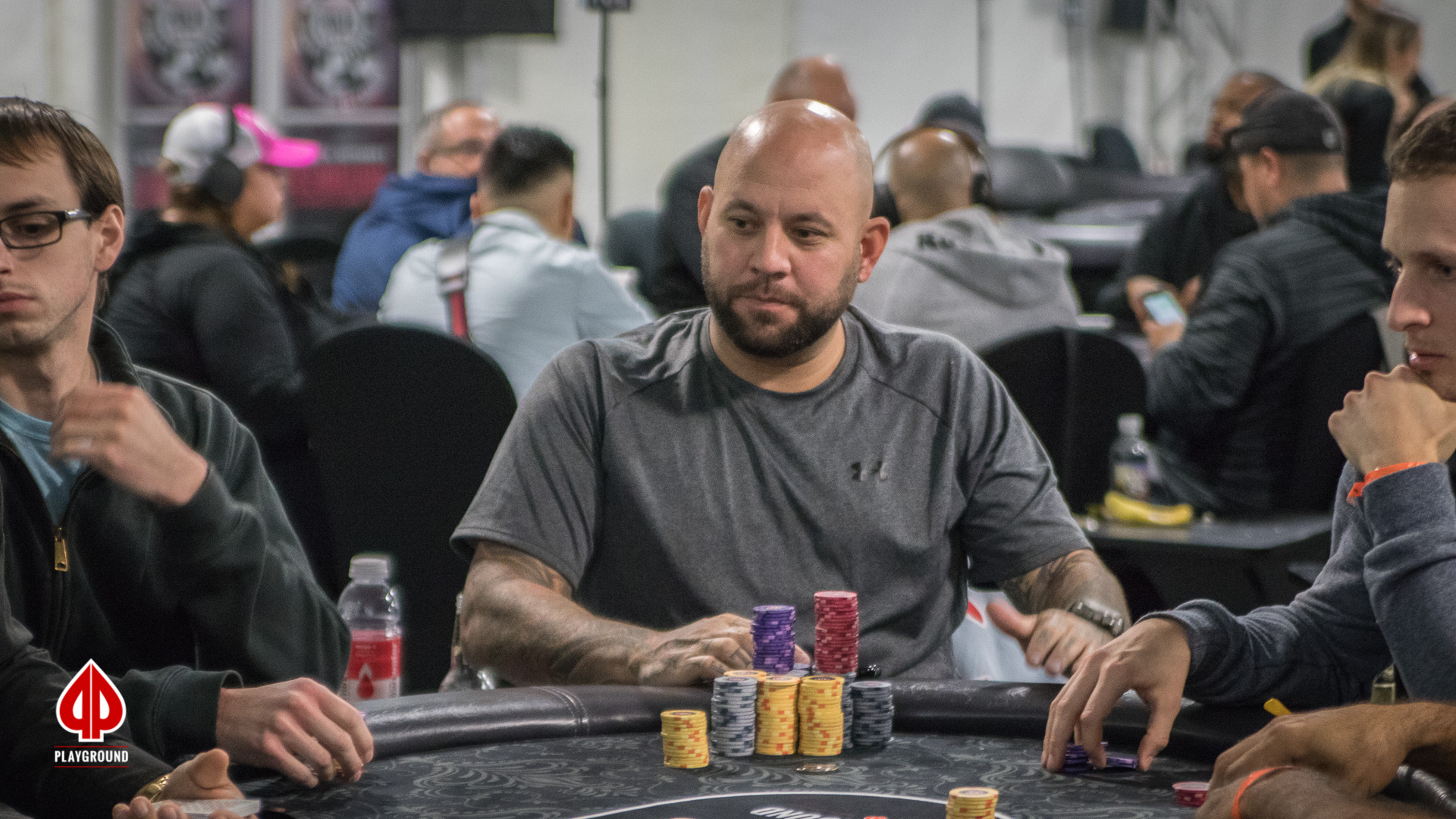 Sopheak Heang and Benjamin Lussier got into a nice little hand over on table 90 just now. While they ended up chopping the pot, the river saved Sopheak, helping him split the pot instead of potentially leaving early.

The hand started off with a 1,200 chip bet from Sopheak in the cutoff. Marc Lavergne called from the button, and so did Benjamin from the small blind. The three of them saw the flop, which came down

. Benjamin checked, but eventually called Sopheak’s bet of 1,800 along with Marc. The turn was a 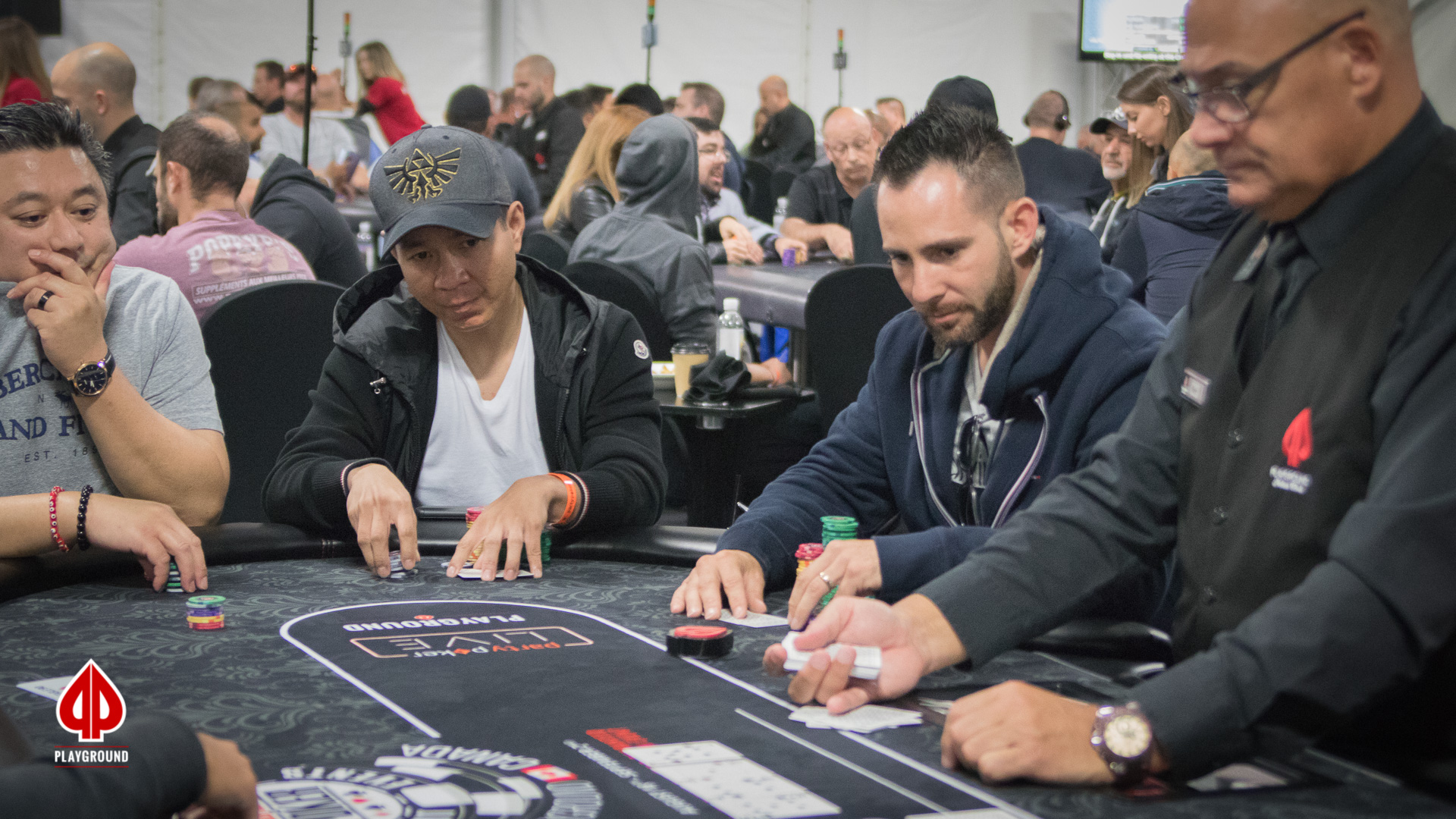 Benjamin checked again, and once again Sopheak led out, this time for 3,600. Finally too rich for him, Marc bowed out – but Benjamin was still game, and called. A

came down on the river, and for the first time this hand, Benjamin opened, betting 10,000. He was quickly re-raised to 27,000 by Sopheak. Both players suspected the other had a six, and they were right. Benjamin jammed over top, Sopheak called, and they chopped the pot. 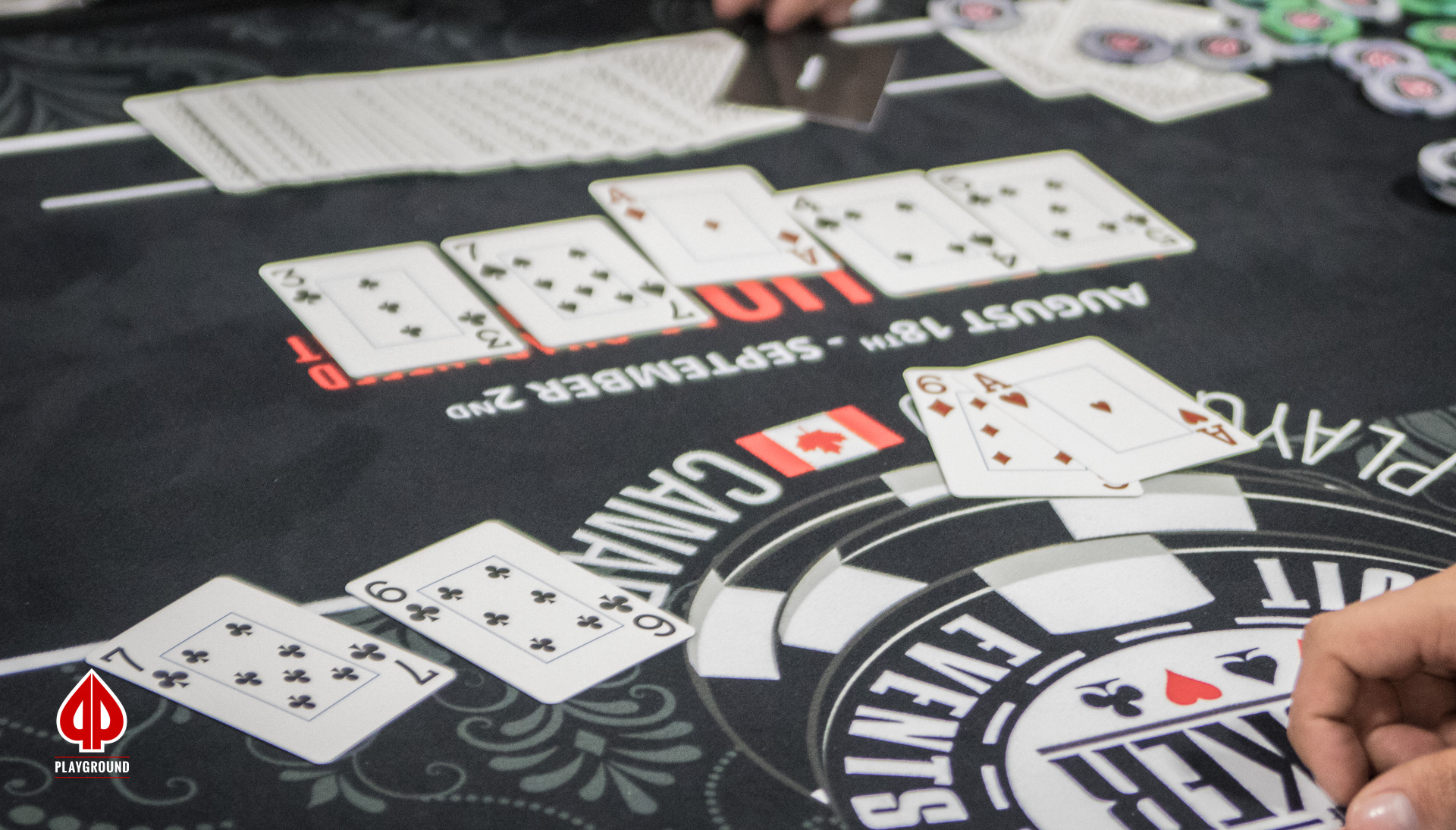 Chris Kokozaki (below, left) didn’t want to give up his pocket eights when faced with a big preflop raise, and ultimately it led to his undoing.

The hand started of with an opening bet of 1,600 by Vincenzo Beatrice, which was called by Gianender Khanna on his left. Chris Kokozaki only raised it to 2,100, which was followed by another raise to 9,000 from She Wong on the button. With that kind of a raise into that sized pot, it didn’t take long for almost everyone to get out of the hand. Chris, however, wasn’t so sure he wanted to go.

Perhaps he was contemplating the 9,000 chip raise into the 6,000 chip pot, wondering if it was a bluff of some kind. Or perhaps he suspected an his opponent had an over-pair, but wanted to see if he could catch a set on the flop. Either way, after some a few more seconds of contemplation, and a further glance up to the game clock, Chris decided he would pay to satisfy his curiosity.

The flop was a

, and Chris pushed his chips into the middle almost out of a sense of obligation. She snap-called and showed his

river were no help to Chris, and She sent him packing.

There is now an hour left in late registration.

At our first break, Tony Wong is up top. His pile of 86,600 chips is more than triple the chip average, although it is still early on in the flight. And don’t forget, this is an unlimited re-entry event until the end of level nine, so there are still a couple of hours to go before it’s too late to join this last flight of the $300 + $30 Closer. 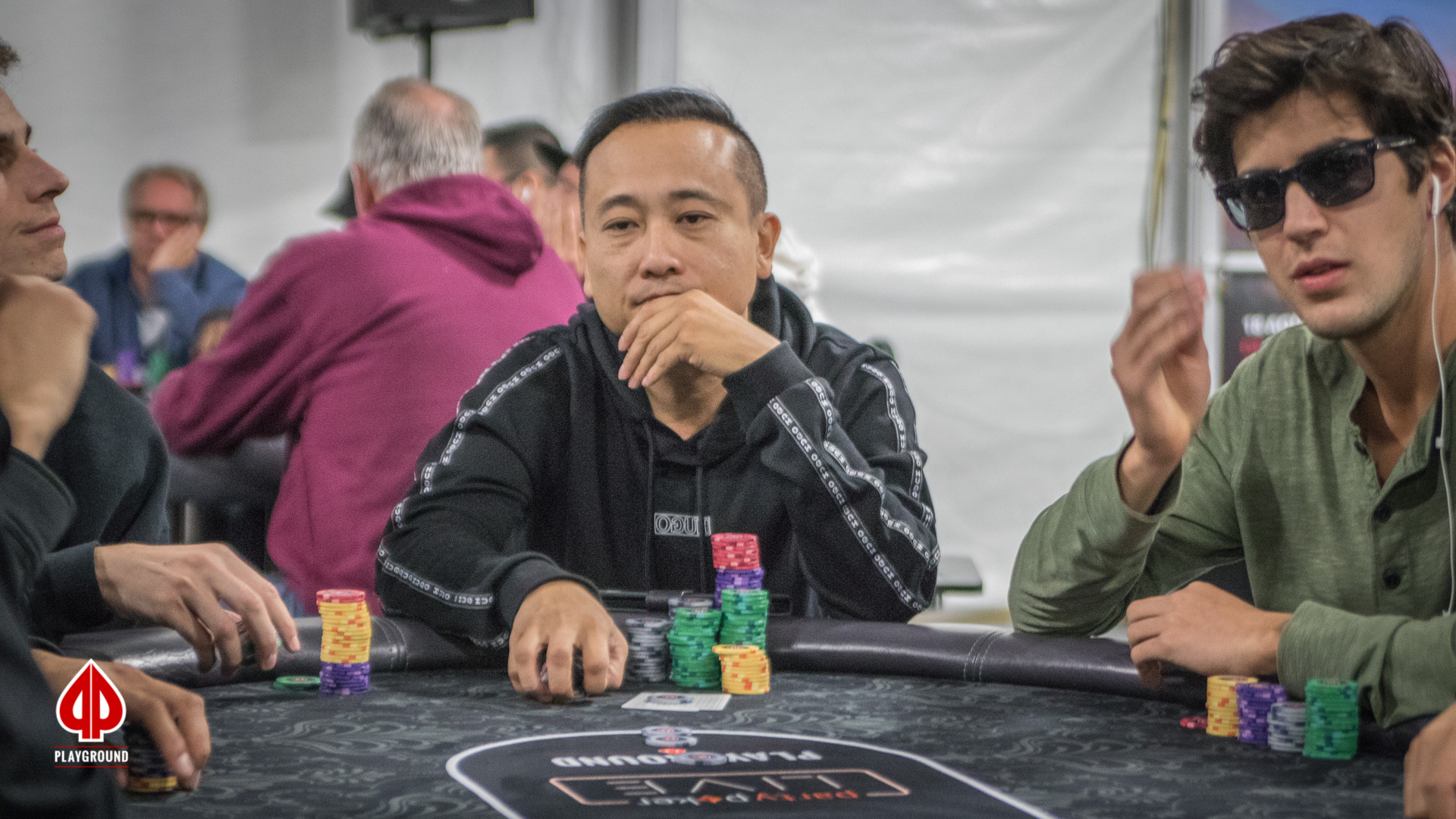 Level four is about to finish, meaning we’ll have our first chip count soon for the Day 1D flight. It’s early on, but with 220 entries already, plenty of chips are floating around the tables, making the accumulation of some early big stacks possible.

With all the poker taking place at the WSOP-C Playground, the building is buzzing with activity.

Players from Day 1D of the Closer have filled up most of the available tables in the tent at the rear of the building, with 168 still at their seats from a total of 185 entries – and we’re only in level three! The crowd will definitely keep growing as the evening wears on. Here are some photos of the field.

We’ve seen a lot of action at the WSOP-C Playground over the last 10 days, and today is no different. This evening marks the final flight of the $300 + $30 Closer. This evening’s event, Day 1D, is likely to see a high number of entrants, especially since it is the very last chance to qualify for Day 2 and the guaranteed prize pool of $300,000.

This is a 10-handed event, and players will start off with 20,000 chips. There are unlimited re-entries until the beginning of level 9, which should kick off around 10:30pm. Competitors will play 14 levels, with blinds increasing every 30 minutes.

We’ll be keeping an eye out for some of our returning players, those who either tried and failed to qualify over the past few days in one of the other Day 1 flights, or those who qualified and want to improve their Day 2 starting position.

This is your last chance to get in on the action. Cards are in the air – let’s play!