Event #3, the Monster Stack, started yesterday and attracted a total of 435 entries, of which 121 returned today for Day 2. Play was eight handed and once the bubble burst with 63 players remaining, the tournament players were in the money. The bustouts started right away as there were many short stacks, but then it slowed down when there were only two or three tables left.

Once the final table was formed, it took almost five hours for a champion to be crowned. All of the final table players were experienced and savvy, and the players did not fool around as they all wanted the championship ring and the $45,000 top prize.

Heads up play was between Jason James and Jessica Vierling, both hailing from out of town and having previously  played in many Playground festival events, both have achieved a high level of success with many final tables. They were by far the two most aggressive players on the final table and it was fitting that they ended up in a heads up battle together.

On the final hand of play, after James had won back chips from Vierling and was now in the lead, both players got their chips into the midlle and waited for the dealer to spread out the board.

and James stayed in the lead, although Vierling had two overcards and could still win by hitting the turn or river. When the turn came it all changed as the

hit the board and now James had a set. The river was the

which did not change anything, and just like that, Event #3, the MONSTER Stack, crowned a champion, Jason James. 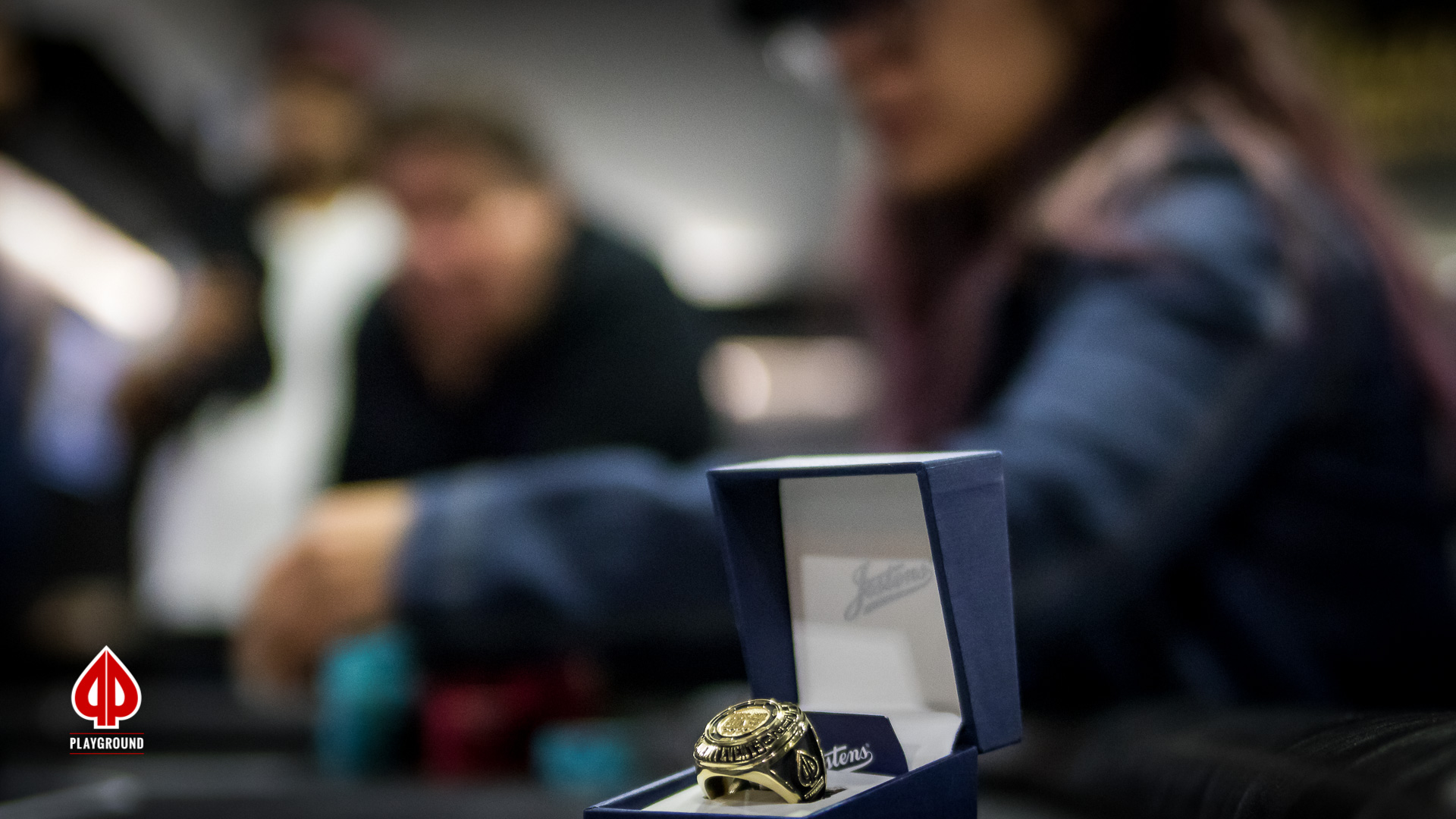 Jason James and Jessica Vierling are now heads up for WSOP-C Playground ring and the top prize of $45,000. 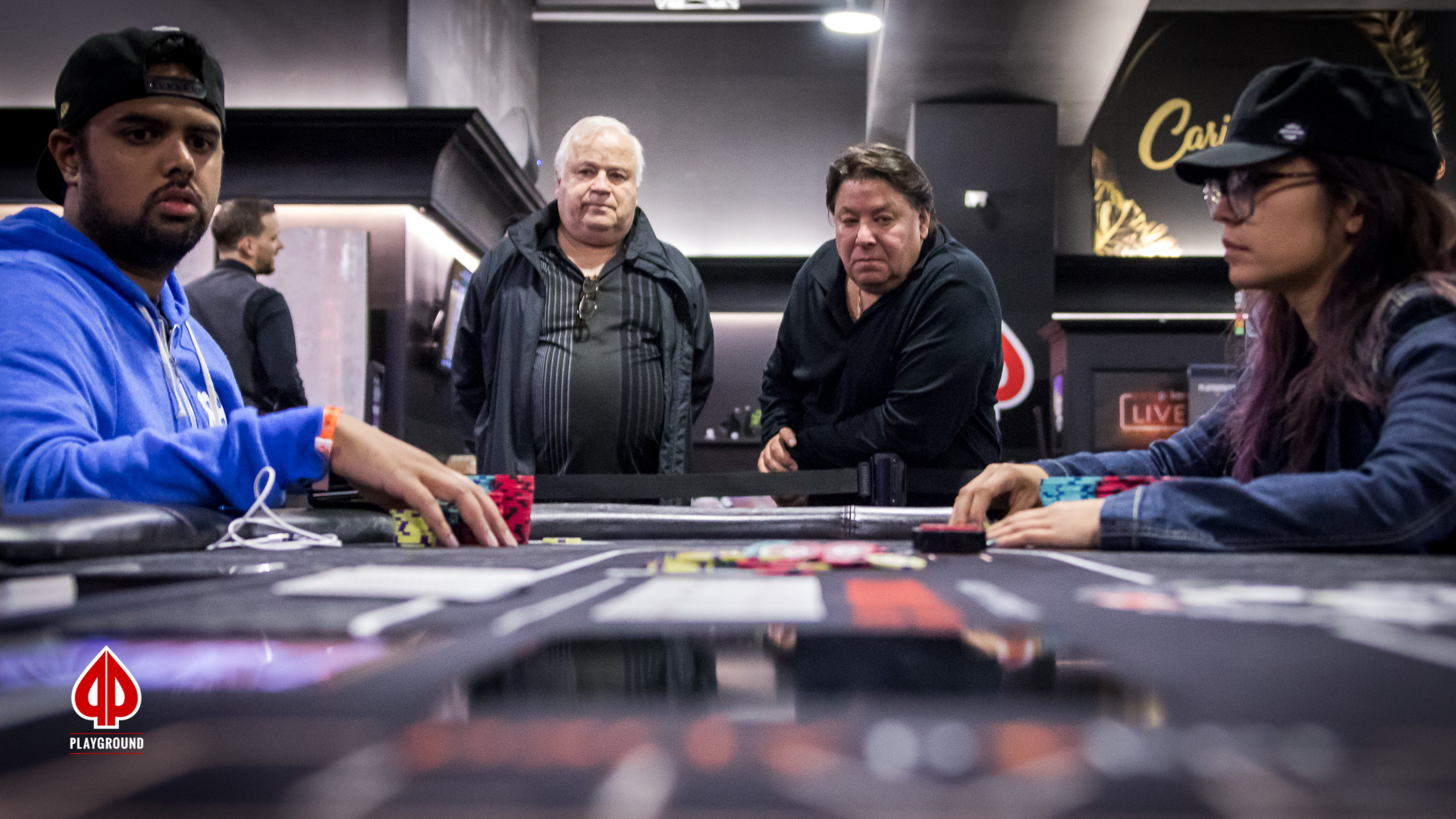 Yannick Labattaglia, a seasoned live and online local player, had a tough day and was card dead for most of the day and consequently he was also short stacked. None the less, he knows how to be patient when he needs to be and he made it to the final table with his short stack. He watched as others knocked each other out and he kept laddering up the pay jumps.

By the time he shoved, his stack was only about four and half blinds and he was called by both James and Vierling who both checked it down.

Vierling caught a king to make a pair and that was the end of the day for Labattaglia who earned $21,000 for his efforts.

In dramatic fashion, Kris Steinback busted out in fourth place. He was heads up against Jessica Vierling and the money went in on the turn on a board showing

Steinbach had the nut straight and Vierling had the flush draw.

The river came the

, completing a flush for Vierling and sending Steinbach on his way in fourth place. 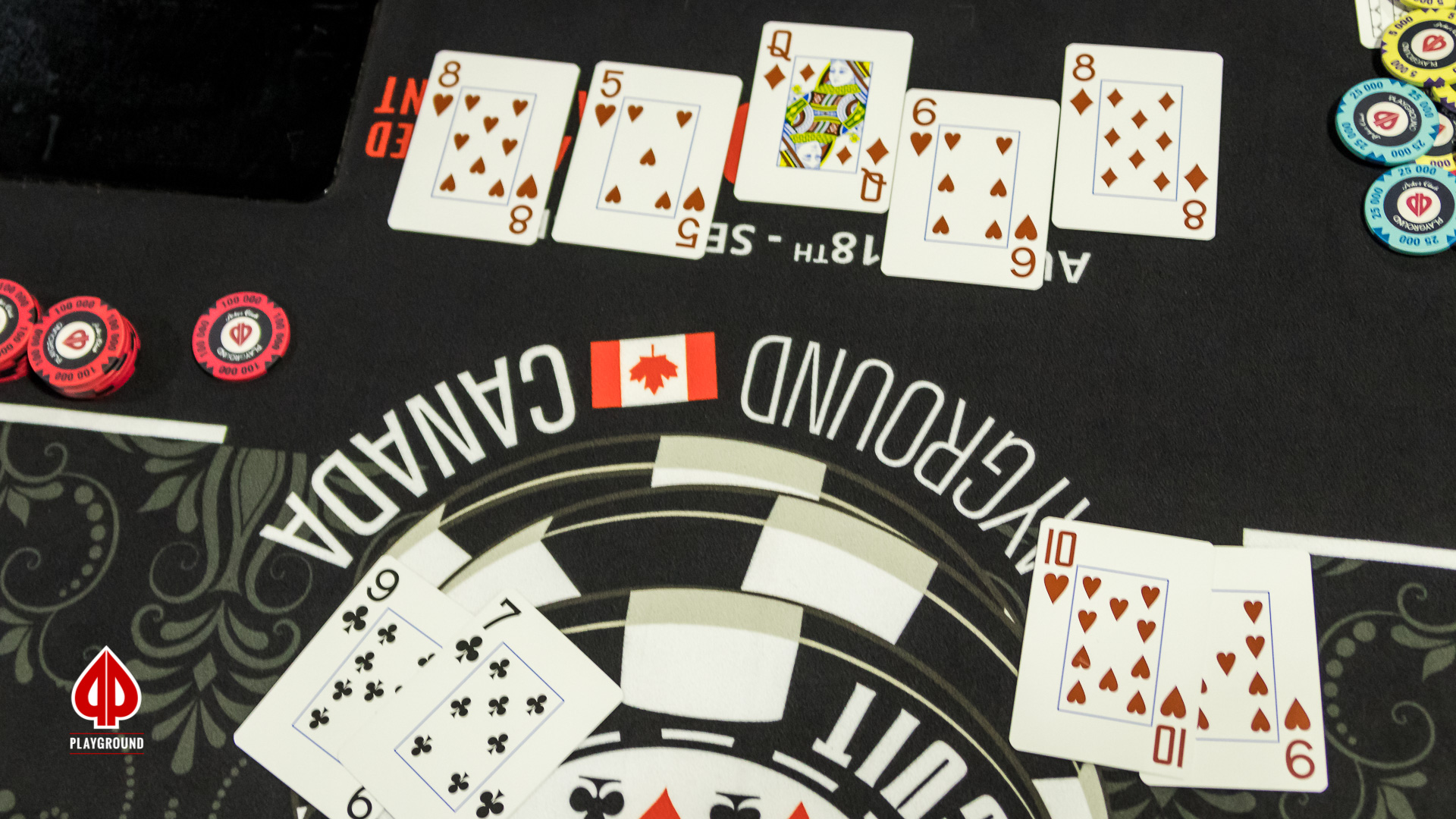 Ed Hislop has been relatively quiet on the final table and his stack was starting to feel some pressure from the blinds when he decided that it was time to make a move.

Yannick Labattaglia made the call without hesitation.

Labattaglia was out in front, however Hislop had two live cards.

and Hislop was sent to the rail in fifth place. 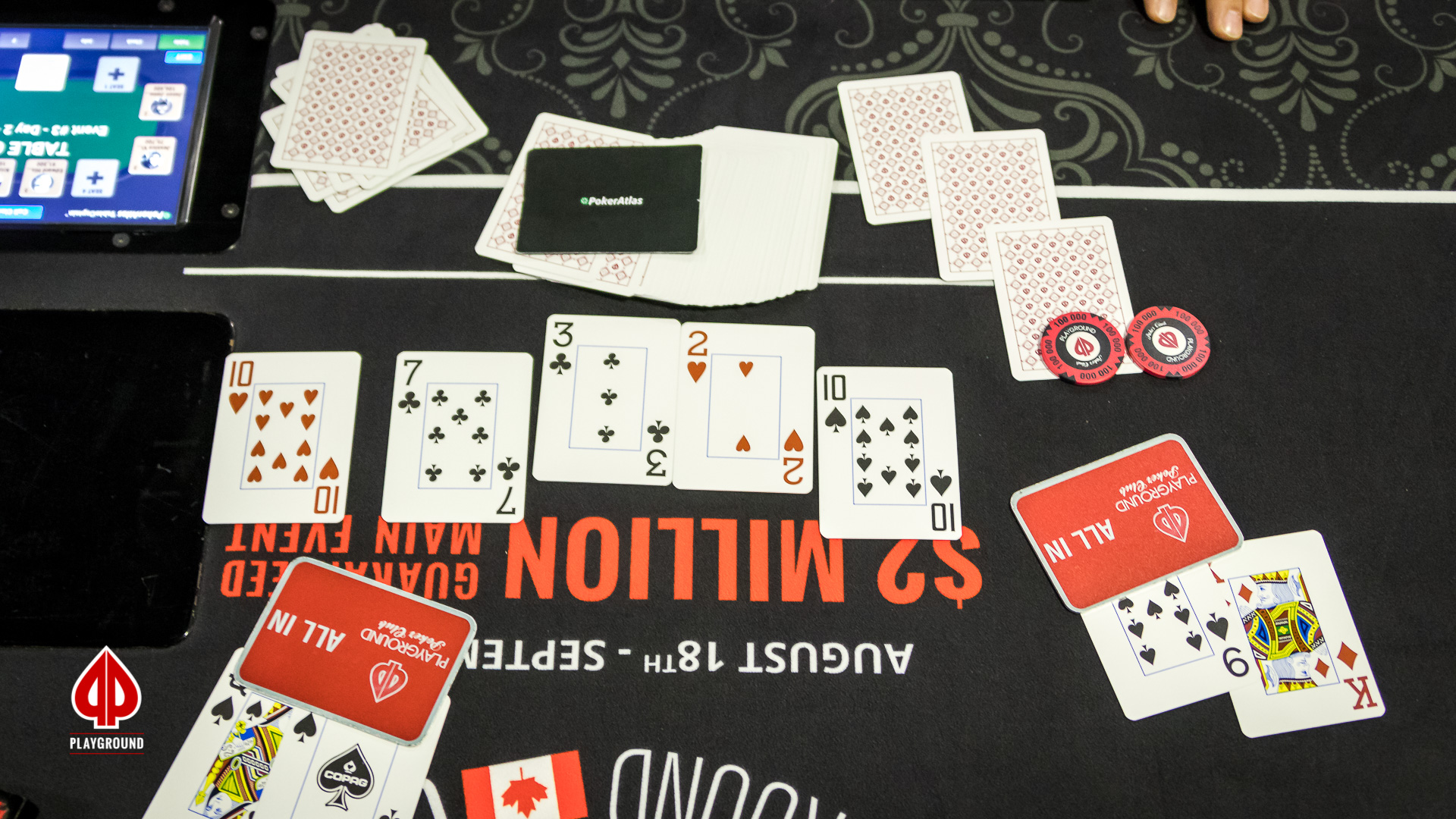 In a classic flip situation, Jason James and Tu Kham Tran had a huge flip.

It was a classic flip. The dealer proceeded to fan out the board, which came

Play is still six handed and with the large pay jumps, the players are doing their best to not make any crazy mistakes.

Here are the chips counts from the break that just passed: 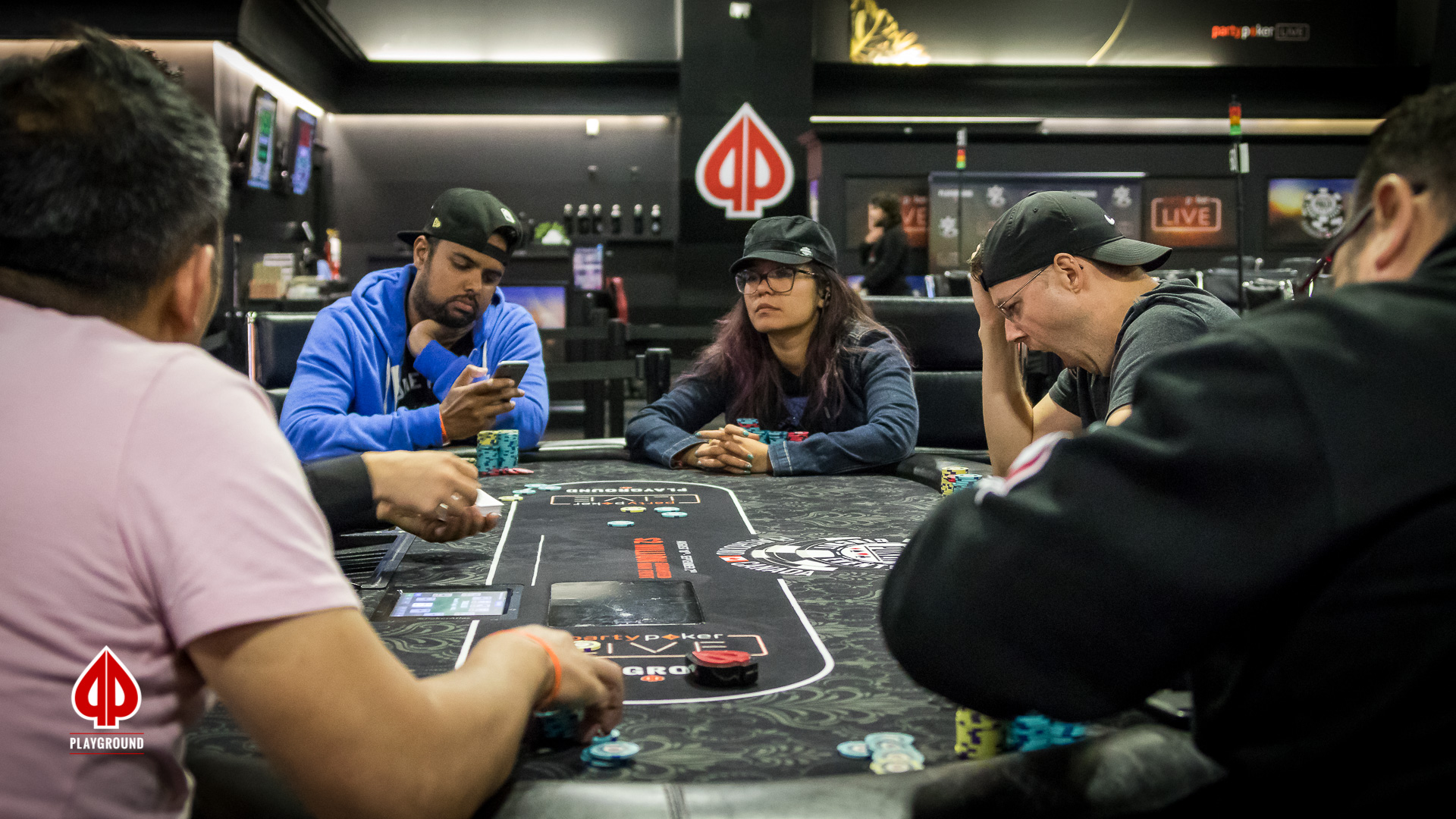 As you might have noticed in this photo, the players are starting to get tired as they have now been going at it for close to 13 hours.

Jean-Francois Lescadres has been very patient and only playing a hand here and there. Jessica Vierling has been very aggressive over the last couple of hours and has chipped up nicely.

In what can only be described as a classic final table cooler, Lescadres finally picked up a premium pair,

, and ended up getting his chips all in against Jessica Vierling, who happened to wake up with a better premium pair,

. To make matters even worse for Lescadres, Vierling had both of his flush outs so he was only drawing to the two remaining kings or maybe some type of straight.

and Lescadres headed to the tournament desk to collect his payout slip for $7,000.

Here is the prize pool for the final table: 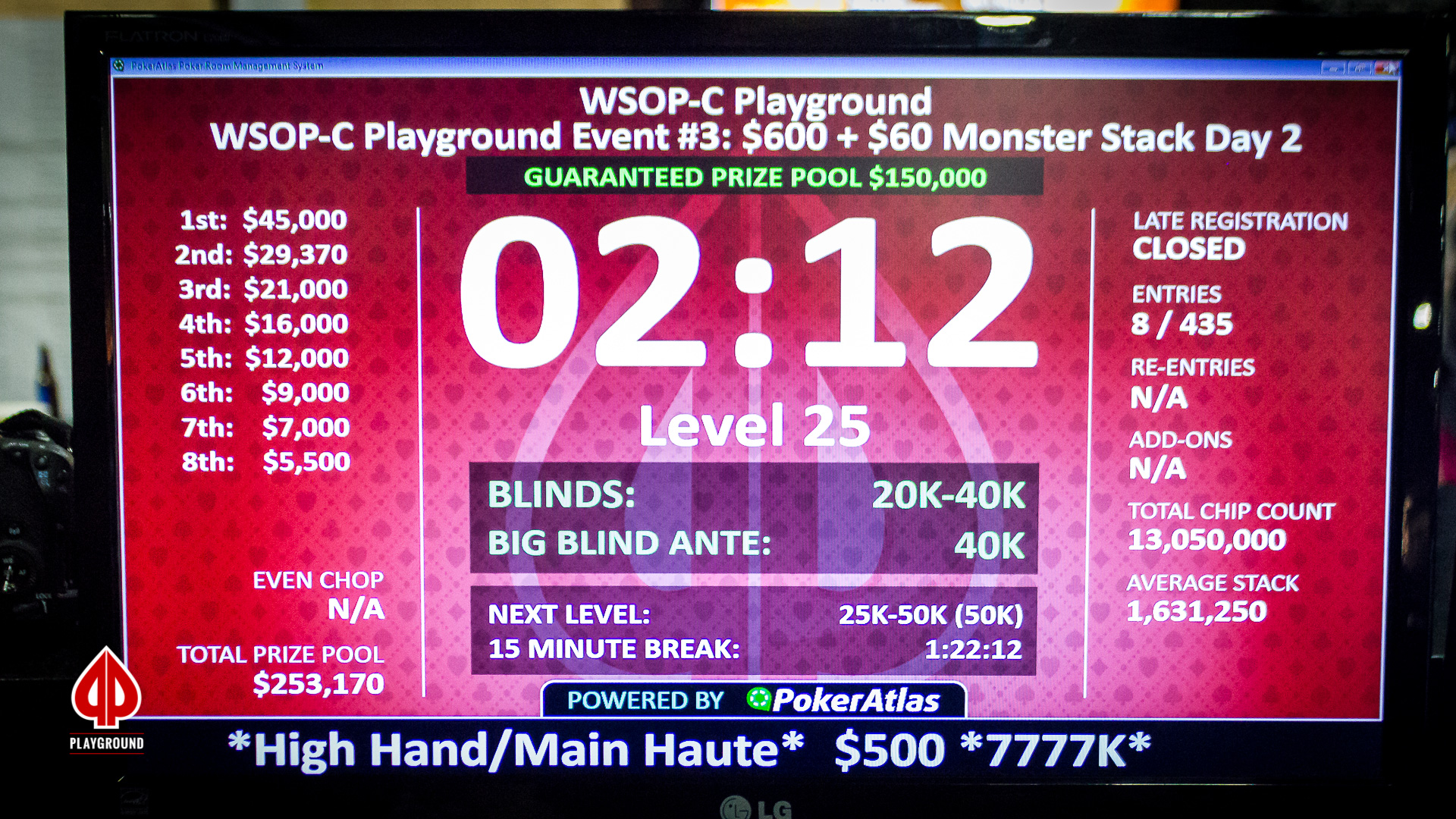 As this post was being written up, Jean-Kristophe Guillette busted in 9th place for $4,500, followed by Paul Daniel Durst who busted in 8th place for $5,500.

The final table has just started and as this tournament has played out eight handed, as per TDA rules, the final table consists of nine players.

Here are the final nine players on the table:

With the blinds at 12,000/24,000, Johan Levyssohn opened to 57,000 from under the gun +1 and it folded around the table until it reached Jason James in the small blind who made the call. Piotr Siwiec folded in the big blind.

The dealer fanned out

and James checked. Levyssohn continued with a bet of 50,000. James made the call.

and action this time went check-check.

The river brought the

and James elected to check again, followed by a bet of 125,000 by Levyssohn. James made the call without any hesitation.

James scooped the pot and his stack just keeps growing. 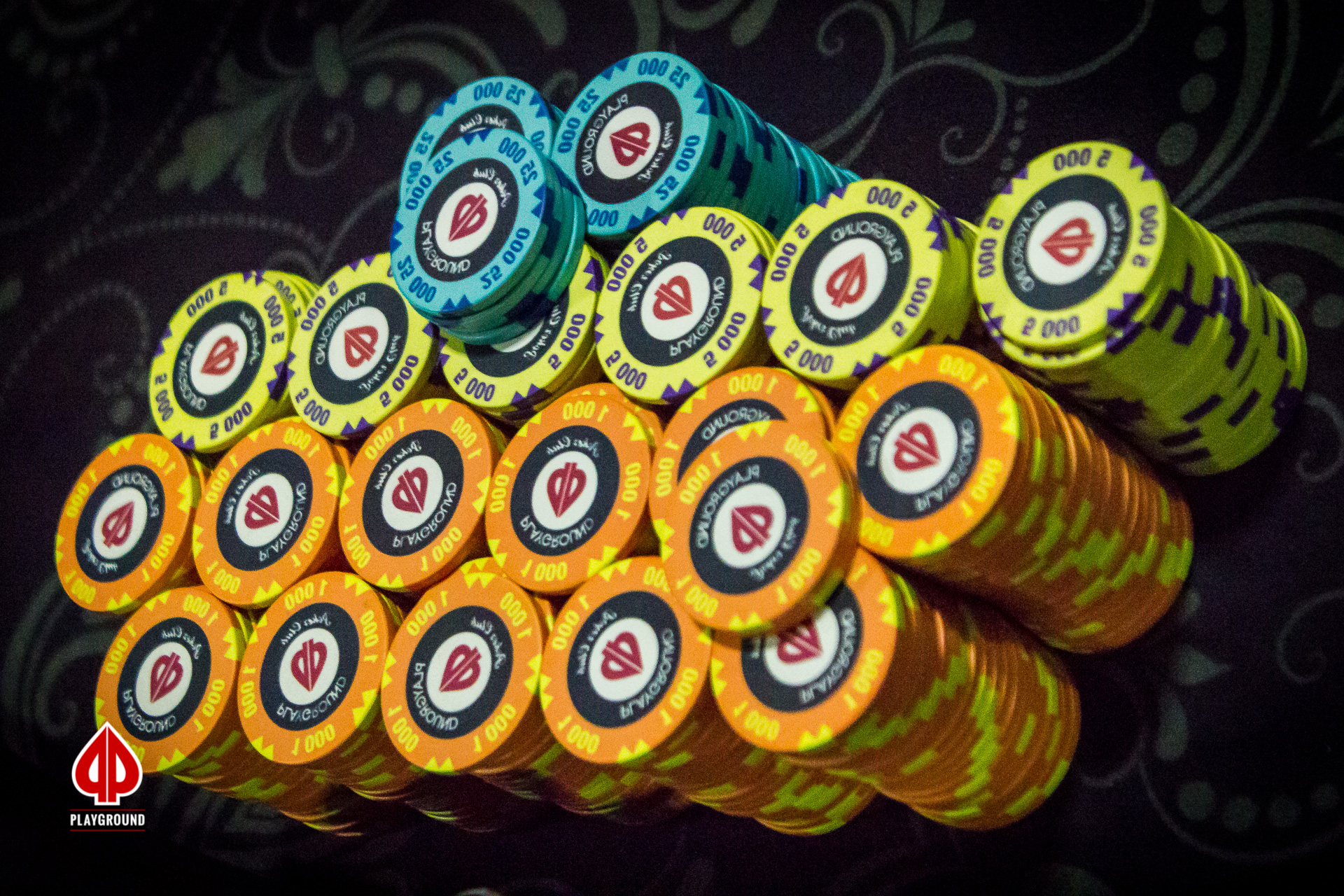 There are only 18 players left at the moment and once the tournament drops to 16 players the will be a seating re-draw.

The race is now getting very tight and there are a few players who are very close to each other. Kris Steinbach is in the lead with 1,200,000, and Jessica Vierling is closing in on him with 1,190,000.Only 10,000 chips separates the two players.

With a cool $45,000 up top, you can be certain that the players are very aware of the ICM considerations at this point and they will try to make wise decisions while thinking about the final table pay jumps.