The Colossus managed to round up 3,538 entries, accumulated over 13 starting flights. This number allowed the event to surpass last year’s turnout by 35 entries, beating our own Playground record for biggest tournament field ever in the process! 509 players returned for Day 2, and 9 players came back for today’s final.

Today, runners came out of the gate roaring. Eliminations were quick, and at the first break, after two hours of play, the table was reduced to three players: Morgan Aceto, Miguel Cholette and Éric Laliberté. Cholette fell to Aceto’s gutshot draw, which filled on the river, and that left two players with somewhat equal stacks for the dual.

As soon as the heads-up match started, Morgan Aceto applied maximum pressure on Éric Laliberté, who couldn’t figure out how to respond. Laliberté’s stack quickly eroded and soon enough, Aceto was enjoying a 2 to 1 lead. The only pots that Aceto was letting go of were the limped ones, and the few big blinds that he folded.

But poker is rarely a one-way road, and Laliberté finally found a way to double up against his predator. After that, on the players’ request, the ICM numbers were brought to the table, and after some hard negotiations as to where exactly would the 10% come from, the portion required by partypoker LIVE rules to remain for the eventual winner, a deal was struck. Laliberté agreed to take 104K, or about 4K less than his chips entitled him, and Aceto was happily securing 103K. They were now playing for 23K up top.

Shortly after, Aceto and Laliberté got it in with hands very close to the top of their range.

The flop was brutal to Aceto, and after unsurprisingly failing to hit a 1-outer for the win, he was left with less than 10M chips to Laliberté’s 60M+. Two hands later, Aceto shoved into aces. The situation was almost comical too him, and he could only smile as the cards were being revealed. You can see the full hand pictured below.

Congratulations to both players on a great performance, an amazing finishing position, and a very handsome 6-figure payday. And a very special note to Éric Laliberté, champion of the 2019 WSOP-C Playground Event #1, the Colossus! 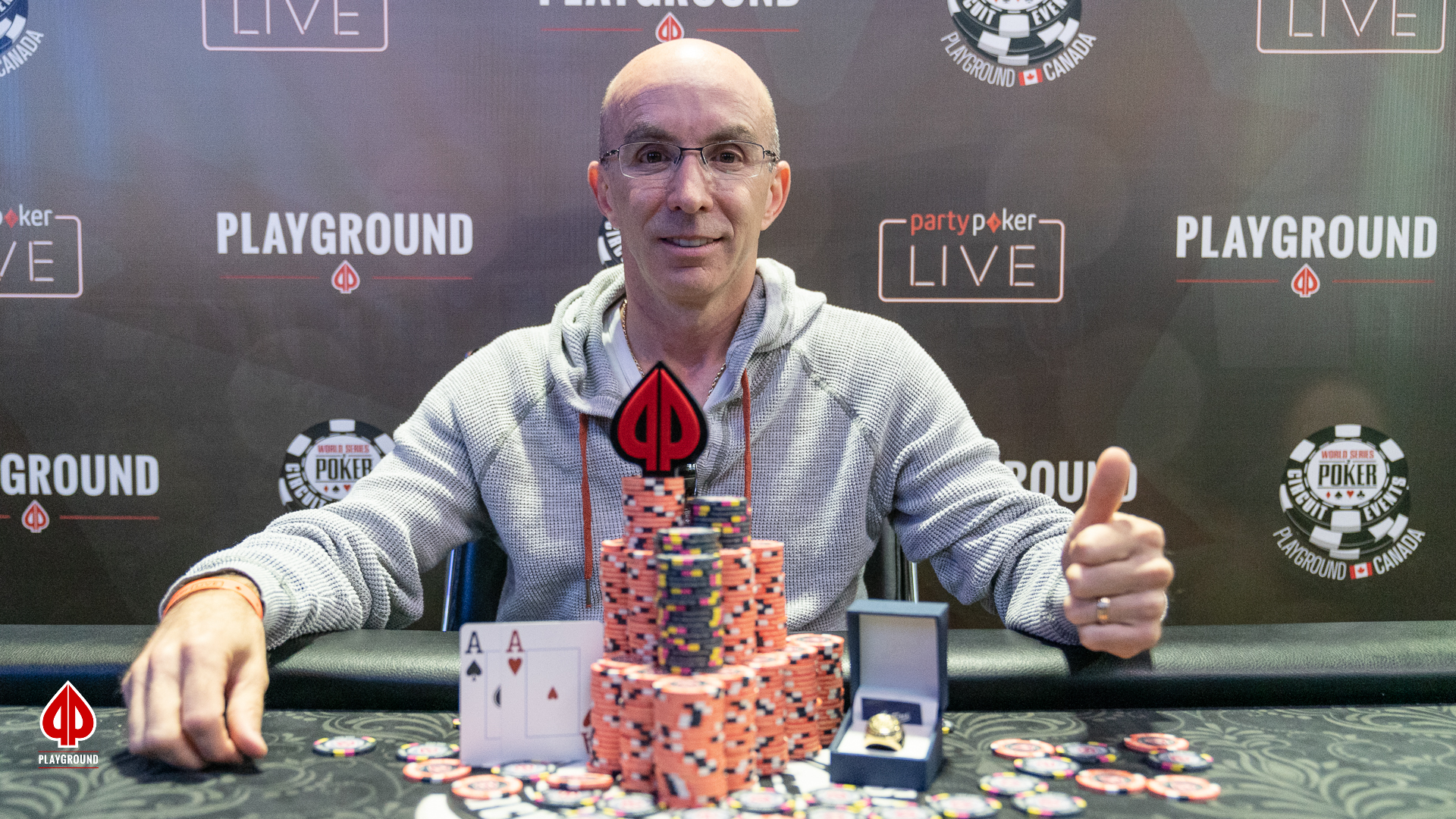 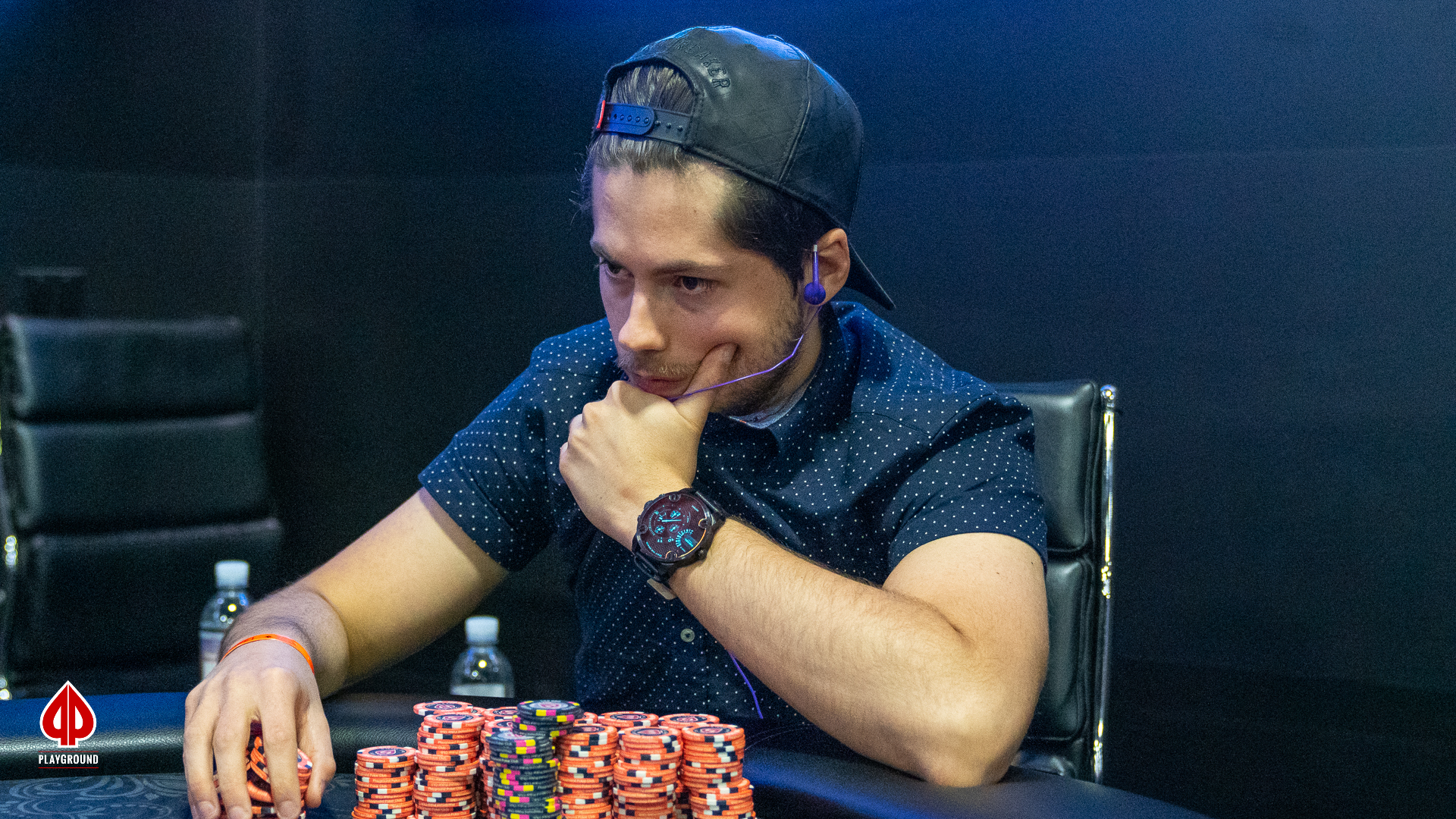 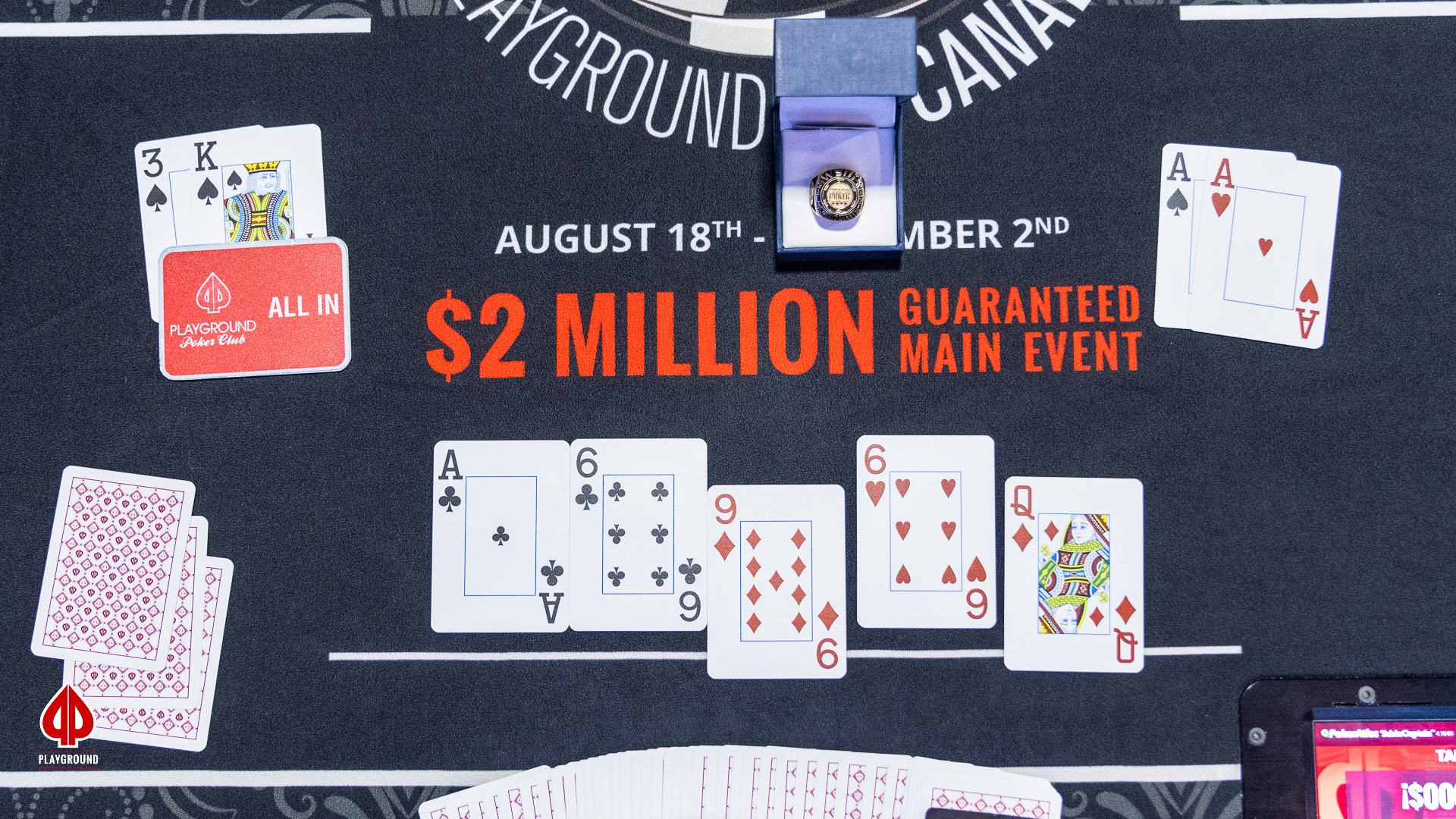 Morgan Aceto, since the beginning of the heads-up match, was leaning hard on his opponent Éric Laliberté. He managed to bring him down to almost 20M chips, before both were dealt an ace, and the preflop all-in ensued.

Aceto, after all his painstaking work, is now an underdog, with about 27M to Laliberté’s 42M. Players are taking a break while the tournament staff crunches the ICM number. As a reminder, in partypoker LIVE events, 10% of the remaining prize pool needs to remain for the eventual winner.

Right after play resumed, Éric Laliberté cheekily limped his small blind, hoping for Morgan Aceto to continue with his relentless aggression. Sure enough, our (former) chip leader obliged and shoved. The call was instantaneous.

On the next hand, Aceto open shoved his small blind and Miguel Cholette correctly made the call.

And the river strikes again! Aceto caught the desired ten, and took all of Cholette’s 14M stack. Cholette can be proud of his 3rd place, and the associated $65,000 prize. Good job! 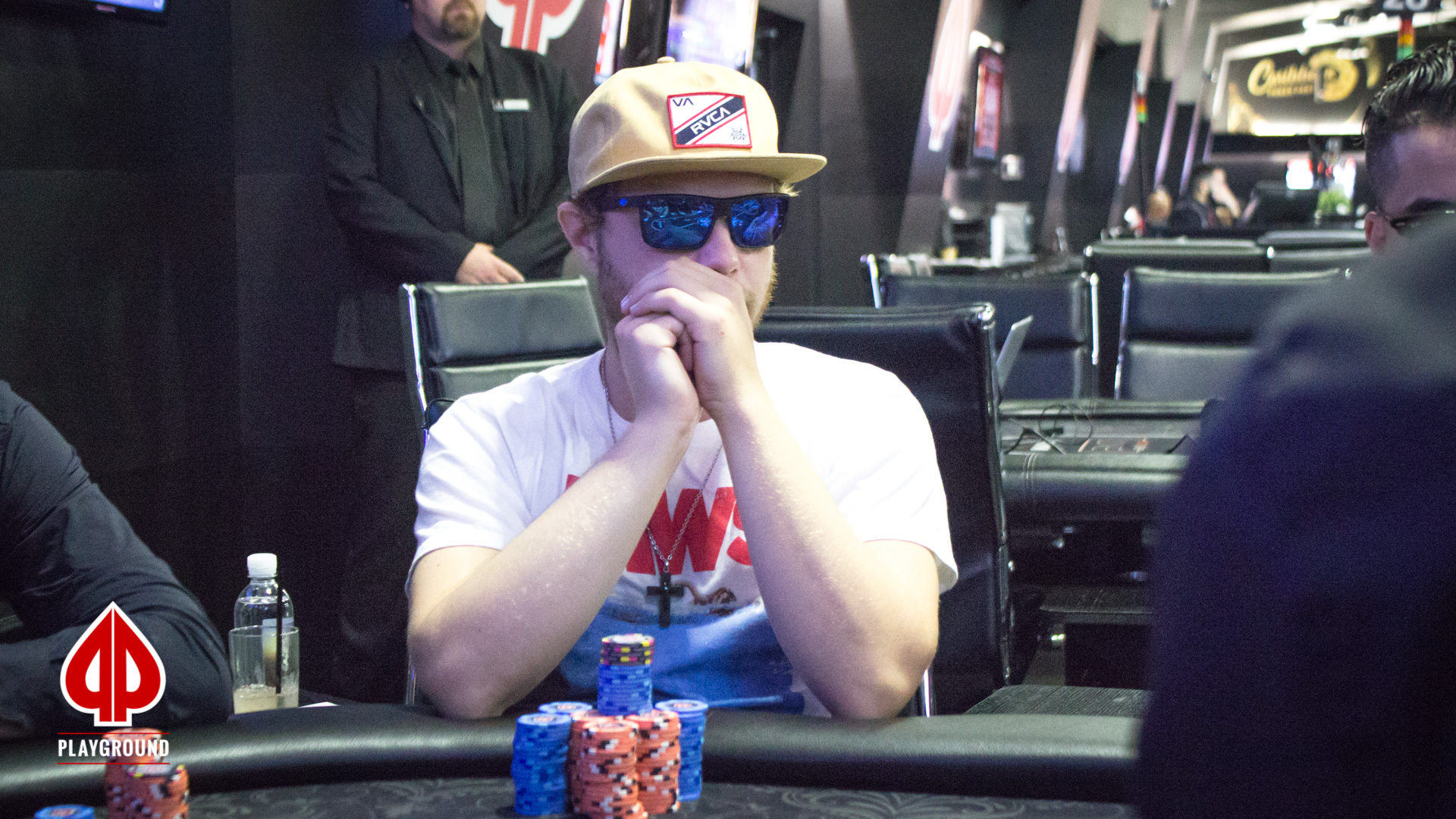 Morgan Aceto, Miguel Cholette and Éric Laliberté took a 15-minute break, which allowed the tournament staff to race off the 25K chips.

Here is an exact count:

Laurence Louie was in a tough situation to manage after Morgan Aceto had built his fortune. Playing with a modest stack, he had the commander in chief on his left, and a couple of times he completed his small blind in unopened pots and was forced to let go before he could peek at the flop.

This hand he open shoved and the action was folded to Éric Laliberté, who woke up with a monster.

Louie came short, handed his stack over, and politely took his leave. He will pick up 4th prize of $37,478. Good show sir! 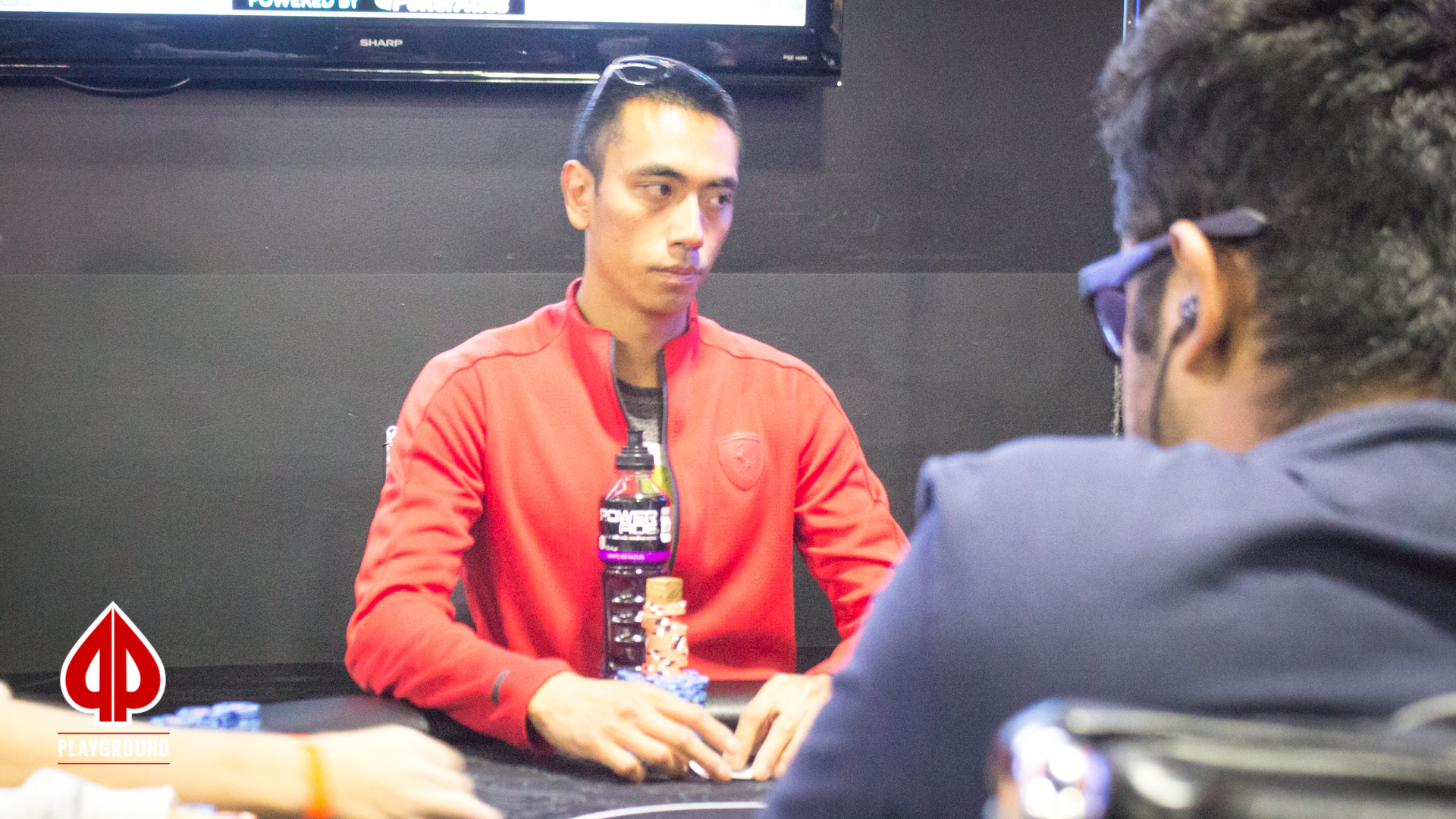 Final 3, with Aceto in the clear lead (over 45M), and Cholette and Laliberté with just under 15M each:

Jishant Sapra, chip leader coming into Day 3, suffered a painful exit. He doubled the blind to 1M from the under-the-gun position, and the action was folded twice to Morgan Aceto.

Aceto, who had announced before that he would bluff every time Sapra would get involved, shoved all-in, covering him by a little. Sapra didn’t wait too long before making the call.

Sapra needed to fade all four 5s to survive and reclaim his stranglehold on the table. Fate, however, had it otherwise, and Aceto took the pot and a monster lead, cheering the gutshot and declaring that a promise is a promise.

Sapra endured a terrible beat and some trash talk for dessert, but he nevertheless walks home with $28,000 for his 5th place. He walked away in a flash, but came back to the table a few hands later to shake all hands. Great sport, well done sir!

With Bradley Phee’s elimination, the Colossus was down to 8 players, and play halted for some pictures of the final 8 – the official final table. Phee went all-in in an unopened pot with 2.95M chips, and he found himself isolated by Laurence Louis.

Phee was still good on the flop, but he knew he had the world to dodge before the end of the run out. The river brought the spade that spelled the end of his adventure. He takes $10,000 for his 9th place finish. Congratulations! 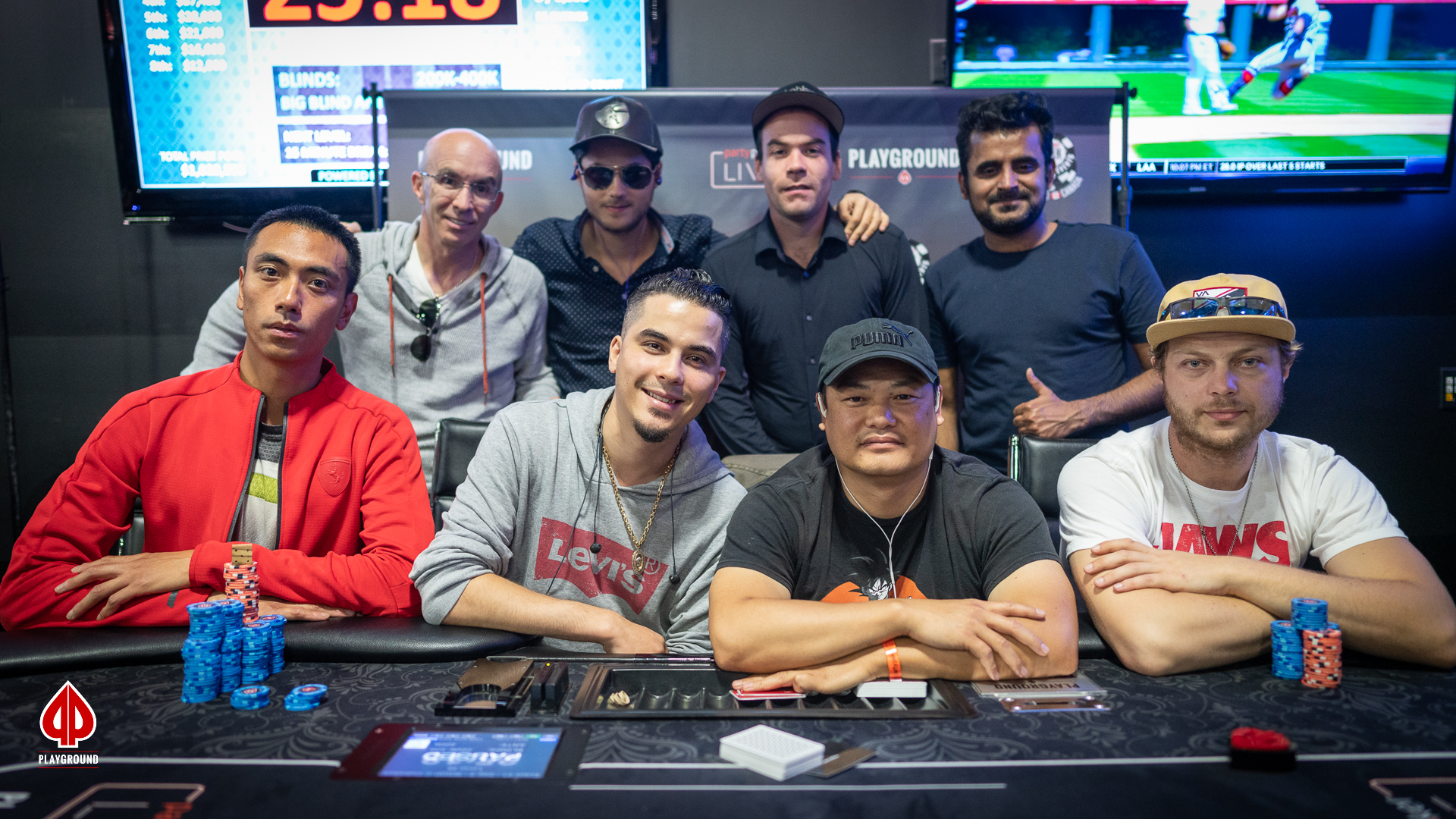 Minutes after play resumed, it was Sofiane Boulila’s turn to be expelled. He got it in in good shape against Miguel Cholette, preflop, but that flop was downright brutal to him.

Drawing dead on the flop, Boulila was resigned to leave in 8th place, for $12,500. Excellent run!

The table didn’t have time to take a breath before the next all-in confrontation. And again, what a brutal board!

Ouch! After flopping a set, a unbelievable run out sent Van Allen to the Rail. He takes $16,000 for his efforts. As for Noy U, he also left. We missed the action, but reports informed us that he faced aces, holding the ace-nine. He takes $21,000 for his 6th place finish.

Play is now 5-handed, and the dust slowly settles from this monster brawl that started the day.

The Colossus Day 3 is officially on the wheels. Good luck to all finalists! 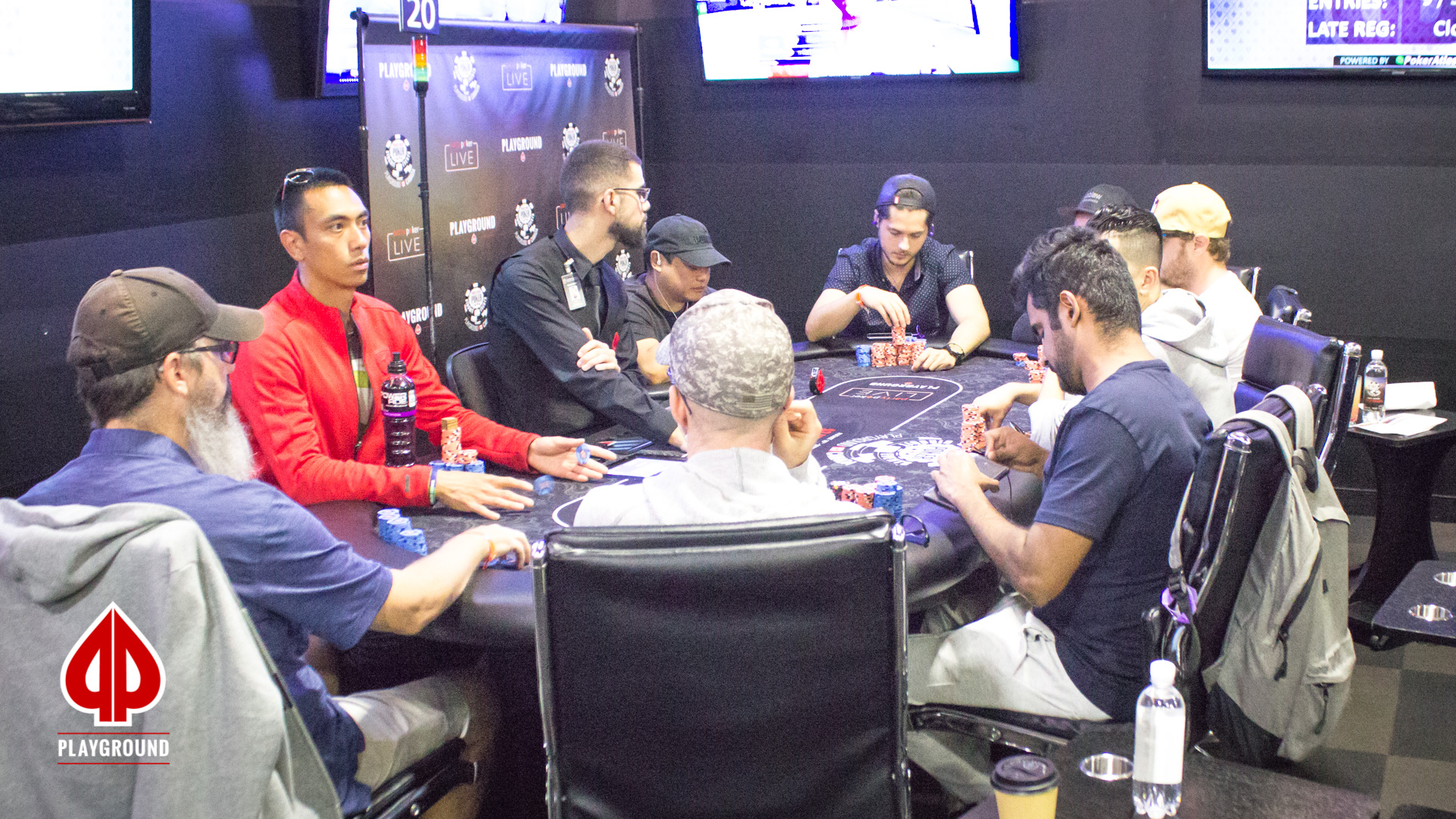 The Colossus is set for its final chapter. The colossal turnout of 3,538 entries, accumulated over 13 starting flights, was reduced to 509 players at the start of Day 2, which played down to the final 9 after roughly 11 hours of play. These 9 players will be back today for the final day of this great event, looking at a minimum pay of $10,000. All of them, however, are gunning for the top prize of $140,000 and the WSOP Circuit ring.

Play has just concluded on Day 2 of the Colossus. Jishant Sapra, the long time chip leader throughout the afternoon, maintained his composure after going through some serious swings that saw him not only lose the chip lead but also put his tournament life at risk to regain the chip lead by the time play concluded.

Day 2 got off to a very fast start. All the returning players were already in the money so they brought a very aggressive approach during the early levels. During the first two hours of play, more than 200 players hit the rail. Although the pace of play slowed from there, it maintained a surprisingly brisk pace all the way until the field was reduced to the final table.

Play will resume tomorrow at noon and play until there is a winner.

Following Felix Noiseux’s in seventeenth place, there was a seating re-draw for the final two tables. The players racked up their chips and shuffled around the two remaining tables to find their new seats. Some players were re-united after starting in the same starting flight at the same table, while most others encountered their new table mates for the first time.

Play will continue until the final table is reached.

Only 19 players remain on Day 2 of the Colossus.

The chip lead changed hands several times during the last level. When the dust settled and the players left the tables on their latest break, Jonathan Barrette had emerged as the new chip leader.

Barrette tournament run took on new life when his pocket kings survived a three-way pre-flop all in that eliminated two players and helped Barrette capture the majority of his current stack. He is closely followed by Laurence Louie, who has quietly maintained an above-average stack throughout the day and now finds himself within striking distance of the chip lead.

Play will end for the day when nine players remain so the pressure will continue to mount from here.