Joe Pellegrino, on his first live tournament ever, managed to overcome a shark-infested final table and claimed the WSOP-C Playground Main Event title!

The amazingly popular series was, again this year, a tremendous success. The Main Event itself was no exception.  It presented four starting flights, including an online flight that featured a novelty: the Online Day 1 & 2. Those who played it went through both Day 1 and Day 2 in a single flight, allowing them to secure a prize before making the trip to Playground, an excellent proposal for out-of-towners.

Players from Days 1A, 1B and 1C merged into one of two Day 2s: Day 2A and Day 2B. Finally, on Day 3, the whole field was brought together in our club to play until the final table, or the end of level 27, whichever came first. The huge number of total entries made it easy to guess that level 27 would conclude way before the final 9 would be decided, and 38 players came back for Day 4.

From 38 players, it took only a few levels to get to 2 tables, and 2 more to form the final table. At that point, however, the average stack counted a lot of big blinds, the level of poker was improved by the resulting depth of stack, and the pace of eliminations slowed down considerably.

We were quite spoiled by the final table play, as all participants showed great skill and determination. Andrew Knowles, winner of an enormous 17M pot early in Day 4, played a great game but exited in 6th place and took $50,000. Samuel Roussy-Majeau, captain of Day 3, managed to take a serious option on the title when he climbed to 40M on the final table, but after a few losses, went out in 5th and was forced to settle for $70,000.

Daniel Neilson was next to go after a taste of Qi Hu’s aces, and left the room $95,000 richer. He was followed by Sinisa Stajic, whose sevens couldn’t hold against the champion’s jacks. His 3rd prize was $130,740.

The heads-up battle was quite short, but high in drama. Pellegrino started with a 3 to 1 advantage. Hu doubled up quickly to even the odds, but very soon, as the champion of Event #5 and his following’s celebrations were going loud on the neighbouring table, our Main Event finalists both picked a hand worthy of dying with.

Pellegrino completed the small blind. Hu raised to 4M chips, or 4 big blinds. Our champion moved all-in, and the call was instantaneous. Pellegrino needed an ace or king, and after 4 cards failed to produce either, he called for a king of hearts. Can you guess what the river was? The full hand is pictured below.

Qi Hu played an unbelievable tournament, and took the runner-up prize of $190,000. Joe Pellegrino, an omaha cash game player, confided that he was playing his very first live tournament. There couldn’t be a better Cinderella story. His friends were close by and cheered him on as he was realizing what he had won. 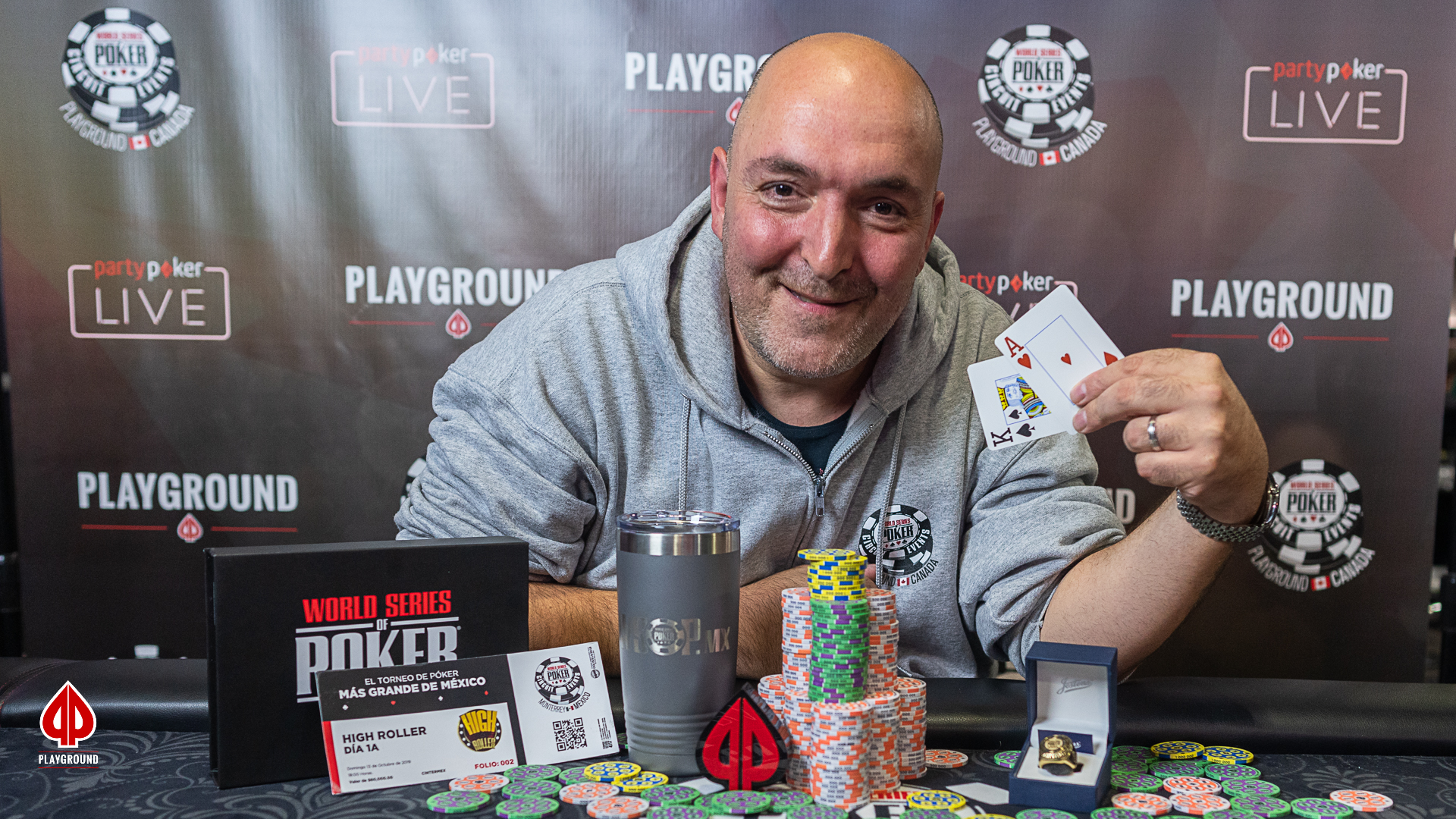 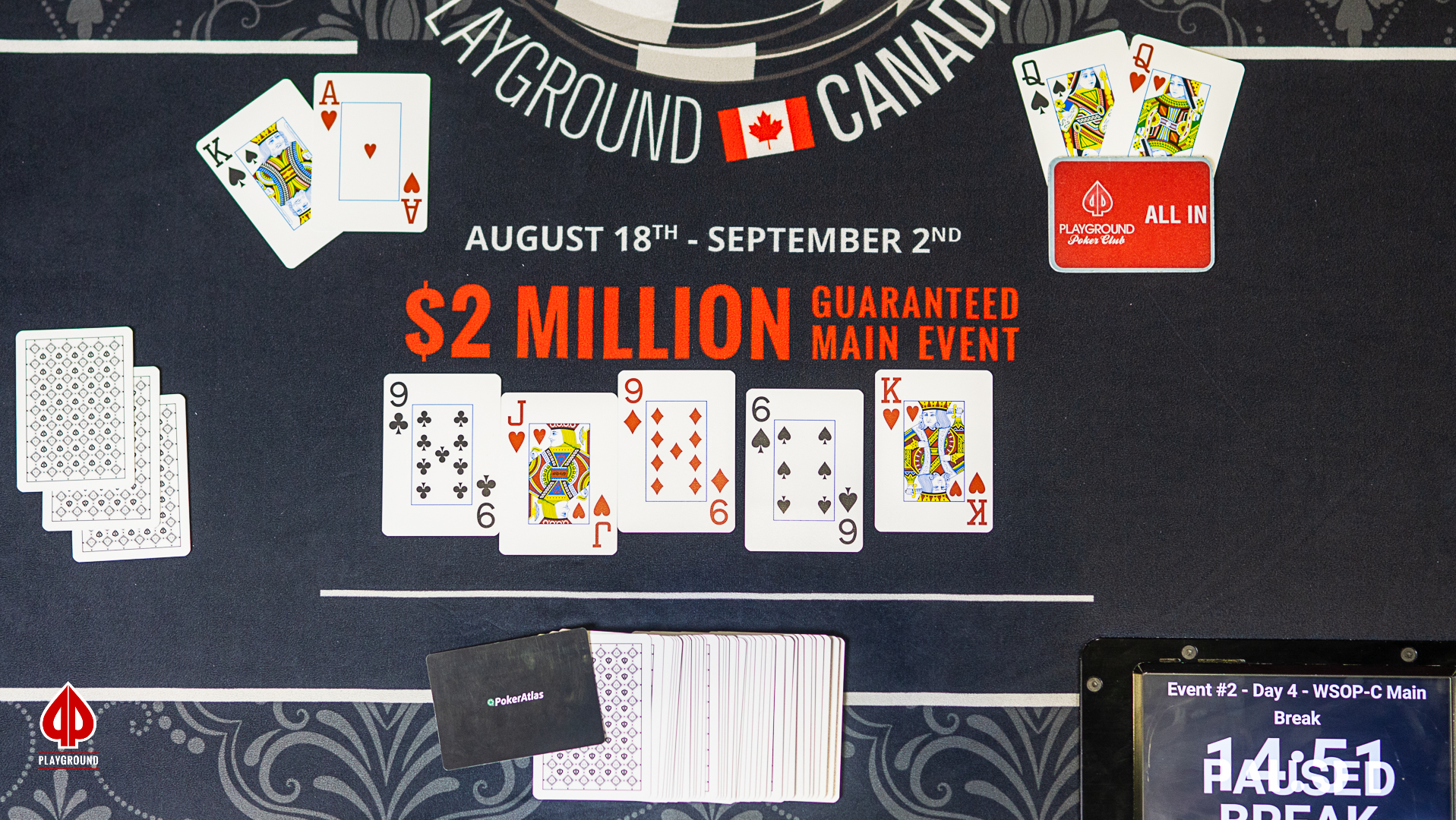 Sinisa Stajic had about 20M left when he picked up a pair on the button. He went ahead and invested his 20 bigs, hoping for a pick-up or a race. He got the latter, as Joe Pellegrino woke up with a monster.

Pellegrino’s jacks held easily, and he started the heads-up match with about 75% of the chips in play. However, he doubled Qi Hu on the second hand when his

failed to hit a king against Hu’s

Meanwhile, Stajic was walking to the cashier, disappointed to have been so close to a WSOP-C ring. His $130,740 payday will surely hit him in the morning, erasing all hard feelings. What a run by Stajic!

Qi Hu, strong from a recent knockout, made it 1.8M to go from the button. Daniel Neilson was on the big blind and announced all-in. After some deliberation, Hu made the call.

The ace came in the window, and the rest of the flop was also bad news for Hu. Neilson’s 22.2M was so doubled up, and after losing a small pot, stacks are once again about even.

Qi Hu raised small, and Daniel Neilson made the call from the big blind. That flop seemed to hit him pretty well, but Hu was well off from the beginning. Some chips went in on the flop, but it is the turn that saw the majority of Neilson’s chips go in.

The river was irrelevant, and Qi Hu took Neilson and a comfortable lead. He is now leading the trio with nearly 55M, half the chips in play.

Just before the break, Sinisa Stajic and Daniel Neilson went at it in a blind-vs-blind battle. All streets saw small bets go in, and Neilson’s 2.3M river bet was raised to 7.5M. After some thinking, Stajic made the call, but both players had turned trip queens with kicker on board and chopped the pot.

Our 4 finalists are holding on tight with a WSOP-C title in mind. Here are the updated counts:

The battle is fierce on the Main Event final table. Sinisa Stajic, however, managed to get the best of it and is now sitting on just over 40M. The smallest stack at the moment – about 17M – belongs to Qi Hu. 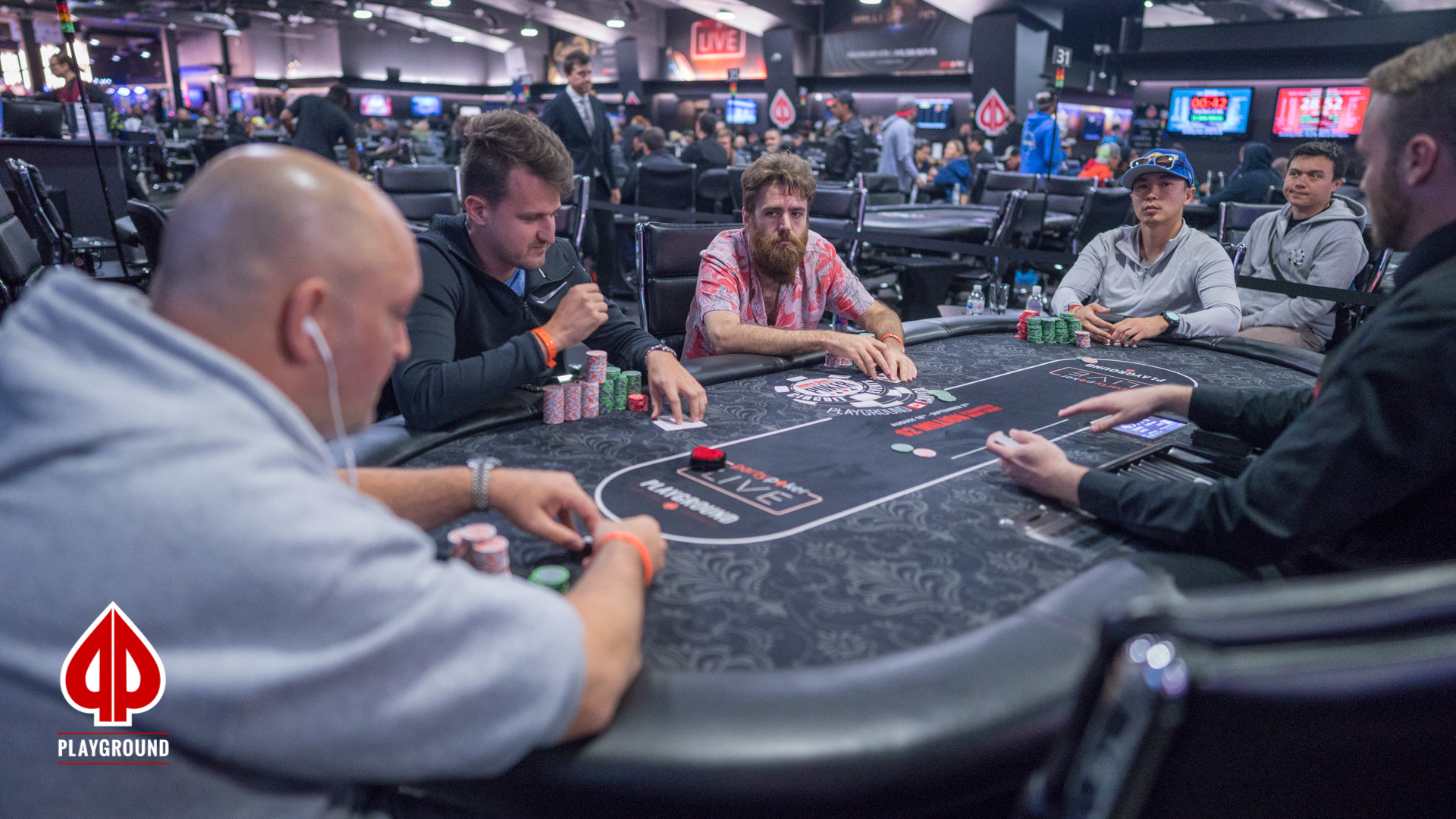 Chips are going around in a button-induced dance. Players are not afraid to play or play back. Joe Pellegrino, who had been cruising below average, yet always upstream, just doubled up with a better ace, evening the chip distribution. Daniel Neilson is now the smallest stack with about 17M.

Samuel Roussy-Majeau suffered a couple of blows, and that’s all it took to put him in a very precarious position. After his last ordeal, he was left with very little wealth, and soon committed pre-flop. He hit a wall named Sinisa Stajic.

The river was an overkill, and Roussy-Majeau left in 5th place, worth $70,000. He was the captain of Day 3 and worked very well on Day 4 to make it to the final 5 with a serious option on the title, but eventually took a few blows and and was forced to walk away.

Congratulations on a very nice performance!

Players took a well-deserved break. When they came back, the first hand saw Daniel Neilson and Samuel Roussy-Majeau get it in on a flip.

Roussy-Majeau, from massive chip leader not too long ago, is now down do 5M chips. The following table has his and Neilson’s stacks approximated.

Andrew knowles opened pre-flop and was called by Joe Pellegrino on the big blind. They got it in on the flop, and knowles realized that his rockets had lost a lot of luster.

The turn fell like a ton of bricks. Pellegrino let out a celebratory scream. The rest of his chips were soon going to be lost, but in between, a huge confrontation took place.

Daniel Neilason and Qi Hu were the actors. Bets escalated, and eventually Qi Hu was all-in for 11,575,000 chips, or about half of Neilson’s stack.

Hu, usually pretty stoic, pumped his fist. He was having a tough time before that hand, and had finally caught a break. Perfect-perfect did not come, and he enjoyed a hefty double-up.

Unfortunately for Knowles, he couldn’t creep up the pay table. He only had about 4.5M left after losing aces to Pellegrino, and put them to work with

, a hand well into the better half of his range. He couldn’t connect and lost to

Poorya Nazari, who had been looking for an opening for while has finally caught a starting hand to go to war with. Roussy-Majeau raised from the cut-off, and Nazari committed from the small blind, knowing he had no equity, but he was holding 2 very cards, and needed to get something going.

The very next hand, our master crusher was at it again. He picked up aces and took Kevin Javier for all he got.

He was now up to just over 40M, which is an amazing lead on this table, and he was slated to add another 10M to that, but Sinisa Stajic pulled a rabbit out of his hat.

Since the last elimination, Samuel Roussy-Majeau has been rather active. He likes to play small pots and pick them up every time the occasion presents itself, but at this stage, there are no small pots. Resulting from his relentless hunt, he is now working with just over 30M chips, which means that it’s not going to get easier for his opponents.

Daniel Neilson is also doing well, with nearly 25M. Others are quite far behind, but none more than one good hand away from bouncing back, with maybe the exception of Poorya Nazari, who holds about 3M.