The bubble has just burst on Day 2A. All of the remaining players are in the money and will be returning on Sunday at 1:00pm for Day 3.

The Day 2A chip leader is none other than Jishant Sapra, who bagged 1,376,000 in chips. Sapra was in the lead for most of the day and slipped into second place during the supper break but managed to climb his way back to the top when it was all said and done. Mark Salerno had the second largest bag, with 1,337,000 in chips and the chip leader from the dinner break, Andrew Knowles, bagged third place with 1,097,000 in chips. Click here to see the complete Day 2 chip counts.

Players will be returning to play for the $2,000,000 prize pool (the prize pool will be finalized once late registration closes tomorrow on Day 2B). This year’s WSOP-C Playground Main Event winner not only walks away with the cash (and ring), but also an entry into the first WSOP-C event happening in Mexico! The WSOP-C Monterrey takes places from October 11 – 21, 2019 at the Jubilee Casino in Monterrey Mexico.

The final hand on Day 2A was quite spectacular. Brian Hodhod was super short stacked with only 4,000 chips in the big blind, not even enough to pay the full ante of 6,000. The action folded to Sterling Webley in mid-position who limped in. When it reached Tanveer Dhanjal he ripped it in trying to isolate. The player on his direct left, Mathieu Caron, then also shoved his stack. Webley folded and all three hands were opened:

, and Caron was way out in front. The turn brought the

and Caron was still in the lead and unfortunately for Hodhod, he was now drawing dead. The river brought the

and Caron could not believe his eyes, with Dhanjal taking it down and eliminating both Hodhod and Caron in a single blow.

Players can still buy directly in to Day 2B tomorrow (Friday) at 12:00pm. There is also one final satellite currently running for entry into Day 2B with late registration open until 11:15 tonight.

As the players have just finished their dinner break and the tournament enters level 17, with the average chip stack being just over 300,000, Andrew Knowles has taken the lead with a cool 1,218,000 chips. Hot on his heels in Jishant Sapra with 1,055,000.

As the tournament will be playing down to 181 players, all of who will bag and tag and head into Day 3 (and be “in the money”), play will slow down as the short stacks will be tanking with the hopes of others busting out before they do and letting them make it into the money,

Here are the complete chip counts of all remaining players:

The players are now on a 60-minute dinner break and enjoying a free hot buffet, as Playground often does for the players during a main event in one of the various festivals that take place every year.

During the dinner break the chip stacks will be counted and a new leaderboard will be published shortly.

Play is moving along nicely and the field has thinned to 221 players with play stopping once it drops to 181 which means 40 more bustouts to go.

Here are some of the faces from around the room:

With 286 players remaining, the average chip count is at 207,900 and the chip leader has now managed to amass a stack more than five times the current average. Jishant Sapra has a whopping 1,100,000, way ahead of the second place runner, Tzu Sheng Huang who is sitting on 684,000.

Play will continue until only 181 players remain, so there should be quite a few other massive stacks as the day moves on.

Here is the leaderboard from the second break:

On table 62, Gary Lucci, a successful regular at Playground festivals, opened in late position from 3,000 to 8,000 and received a flat call from Craig Pyhtila sitting on his direct left, as well as from John Pentefountas on the button and Denis Simard in the big blind.

and Simard and Lucci both checked. Pyhtila put in a bet of 17,000, Pentefountas and Simard both folded, and Lucci raised it up to 35,000. Pyhtila thought about it and then made the call.

and this time Lucci led out for 50,000 which was called by Pyhtila.

fell on the river and Lucci checked. Pyhtila went deep into the tank. A player on the table asked him if he was aware that action was on him; he nodded to signal that he was indeed aware. Finally Lucci called the clock and right away Pyhtila picked up a large stack of chips and moved them forward. It was close to 100,000. Lucci snap called and the cards were tabled:

Lucci had flopped a set and turned a boat, but the poker gods were not kind to him as the river made Pyhtila a bigger boat when the queen hit the board.

Luccvi was seen leaving the room as he busted out a few hands later. 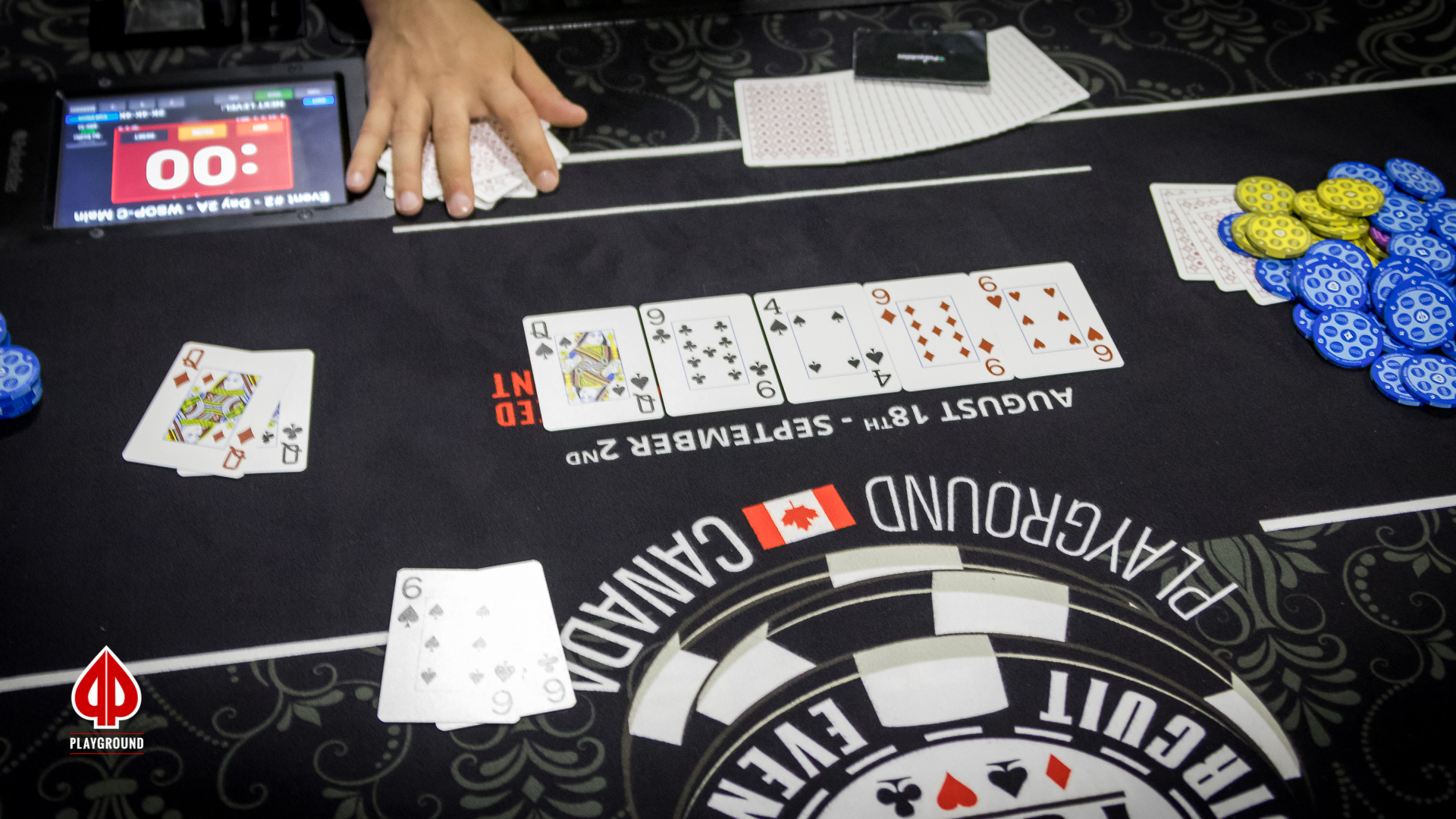 The action has just resumed following the first break of the day, with 392 players still in the running.

Jishant Sapra, who arrived to a massive amount of chips bagged on Day 1B, kept up his strong play and further increased his stack to take a massive chip lead over the field. Leading by nearly a 2:1 margin over the second stack in play, held by Jake Labonte, Sapra is in great shape to cruise to the money.

Now that the late registration period has ended, the money bubble has been established. Play will conclude for the day when the field stands at 181 players; they will make the money and move on to Day 3.

The action got off to a fast start this afternoon. Players are looking to either run up their stacks or make to the cashier before the late registration period closes. And that moment is fast approaching; there is only one hour left in the late registration and re-entry period. So far, there have been nearly 150 additions to the field, either through an initial buy-in or re-entry, and more are sure to follow.

Here is a look at the field from the first level of play:

We were walking around the room to take early shots of Day 2A when we came across a 4-way all-in hand that had players standing up, and what a run out!

Noeung Troeung had open-raised, not suspecting the amount of apposition he would face. The 3 next actions were all-in bets! First Joel Deutsch, then Sebastien Soares, and finally Chen Turjeman, one by one, committed all their chips. Troeung called, covering the biggest of his opponents’ stacks by a bit.

A pot of around 200K was created. A picture being worth a thousand words, here is the resulting board – hole cards appear in order of pre-flop action: 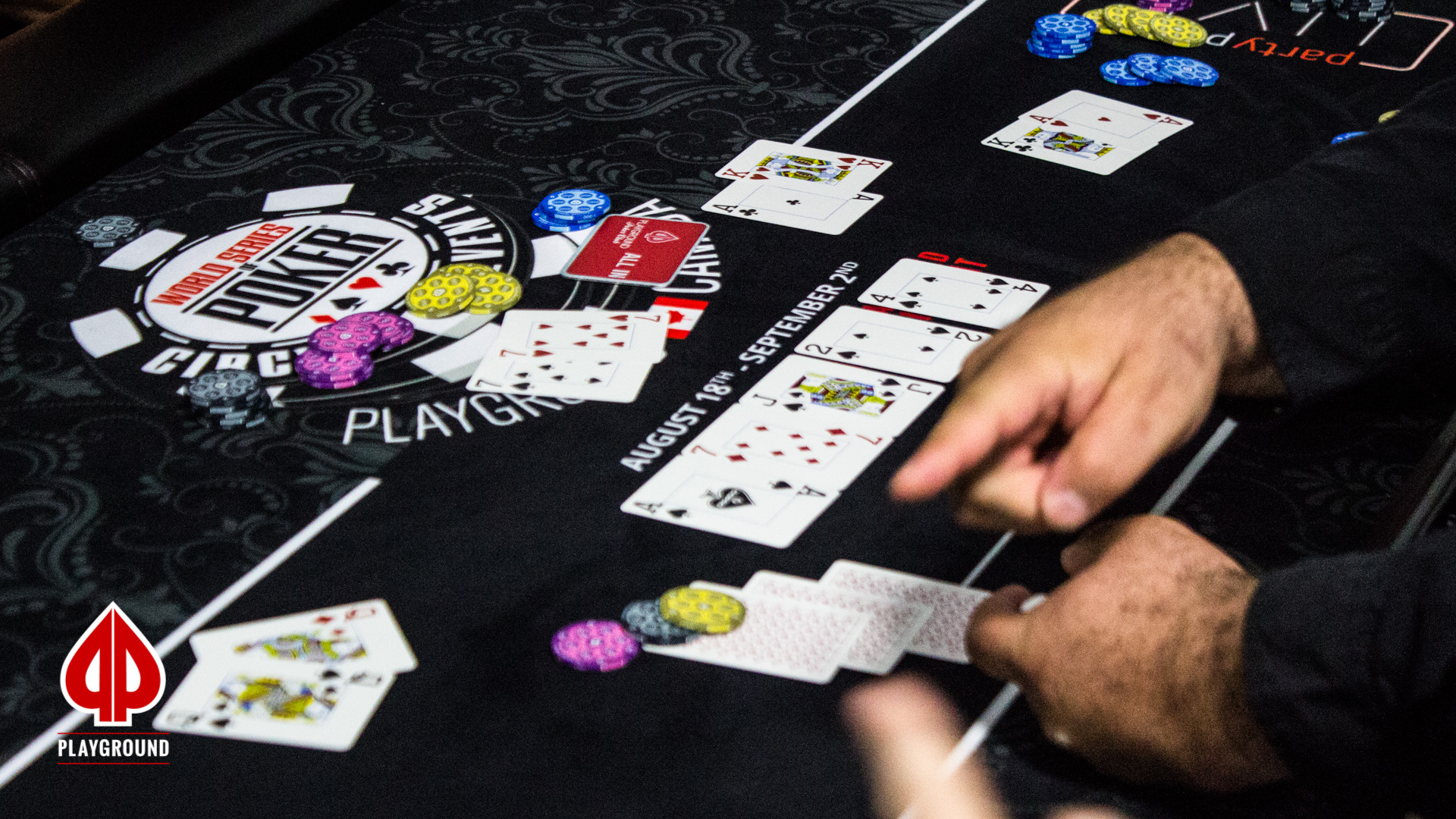 Dealer points to the winner, who is all smile as the chips are pushed to him. 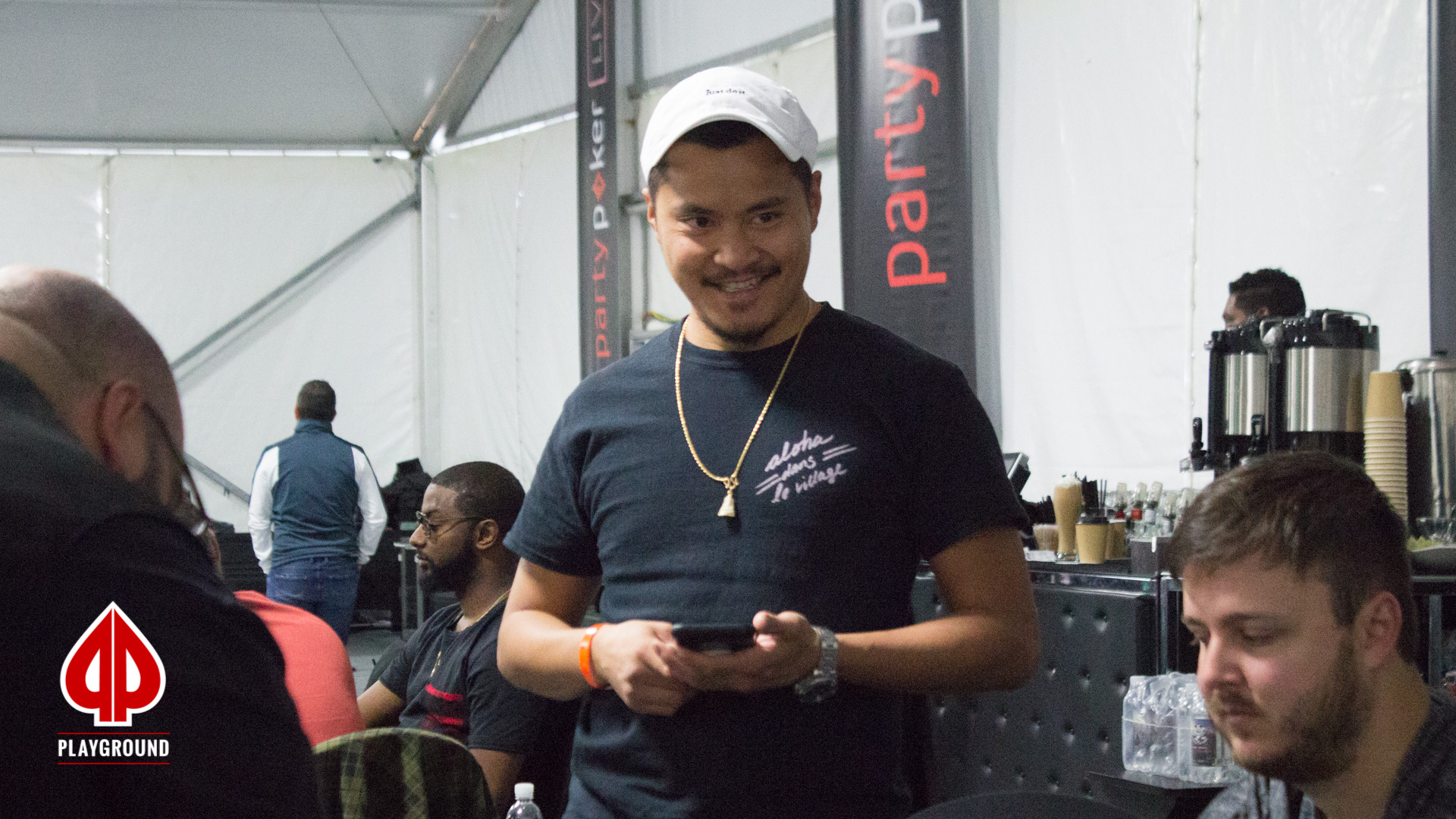 The qualifying players have been joined by a significant number of new entries to bring the field up to over 500 players to start the day. This flight will play until the money is reached, a point which will be determined once late registration comes to an end at the beginning of level 13.

Players who qualified for this flight will not have their bagged stack counted as an entry, which means that they are entitled to an entry as well as a re-entry before the end of the late registration period. For any players buying directly into Day 2A, the single re-entry rules apply.

The WSOP-C Playground Main Event continues today with Day 2A. The 426 returning players who qualified from various starting flights will battle it out until the field reaches the money. Late registration and re-entries will be available until the beginning of level 13 so we are likely to see a flood of new players and re-entries get in on the action during the first two levels.

When play begins at 12:00pm, the players will be seated according to the following table.