In a flight that had a total of 186 entries (including 43 re-entries), Day 1A was a spirited and lively affair, one that saw a lot of exciting poker action. At the end of the evening, just 32 players remained at their seats and officially qualify for Day 2, which will take place Monday, September 2nd at 1:00pm.

Today’s chip leader was Anthony Ribeiro, whose nearly 600,000 chips puts him in the best position to start Day 2. He absolutely crushed it, heads and shoulders above the rest of the flight. That said, many other players also finished the evening with respectable chip stacks, relatively speaking. A list of all official chip counts for this event can be found here. 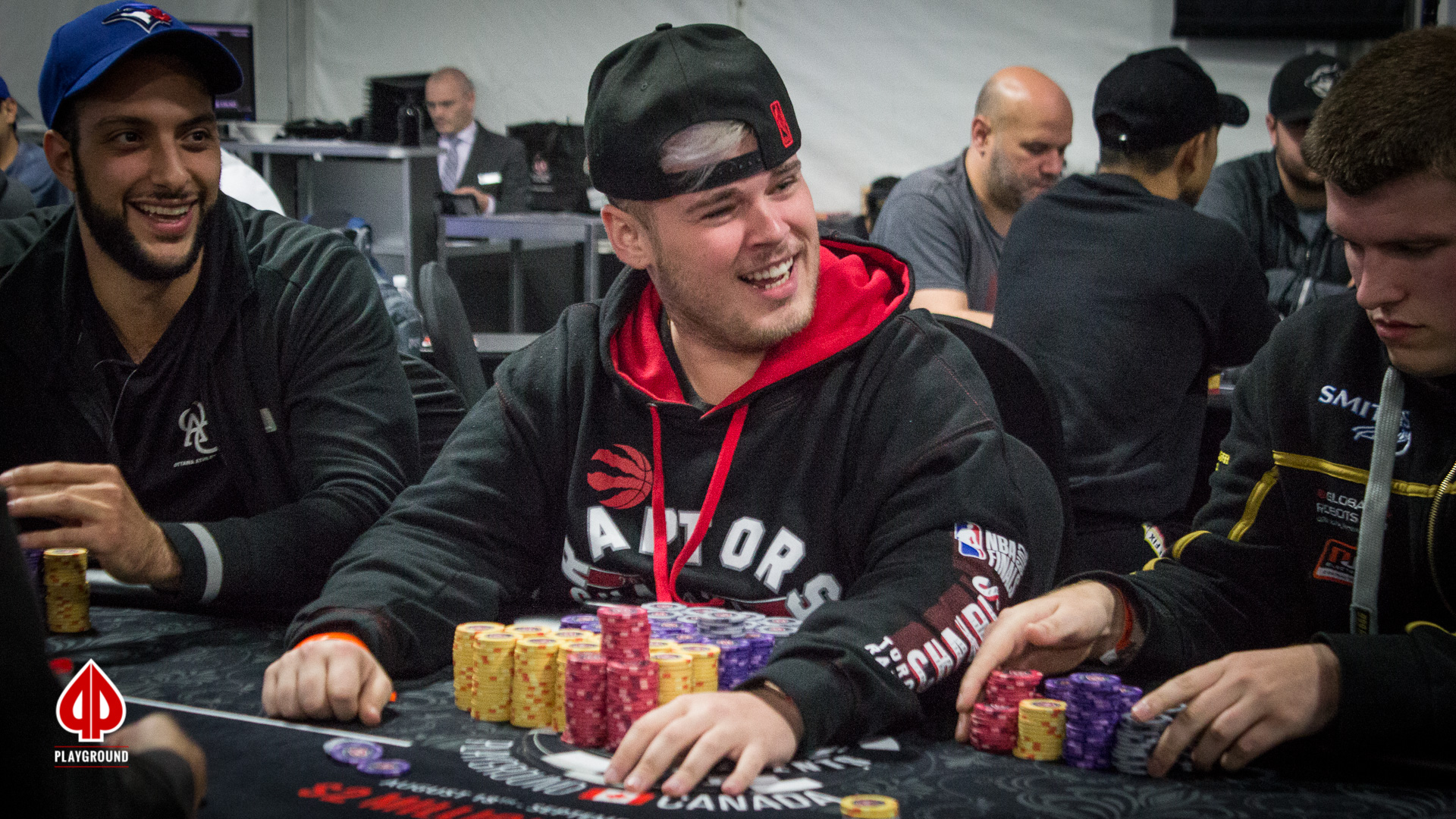 And remember, qualifying players that feel they can do better are allowed to enter as many Day 1 flights as they want. Players who qualify for Day 2 more than once are free to resume play on Day 2 with their largest qualifying stack (all other qualifying stacks will be forfeited).

Speaking of which, there remain three other Day 1s that will take place over the next two days, which means there is plenty of time for other players to take their shot at qualifying for Day 2 and the guaranteed $300,000 prize pool. The next opportunity to take part, Day 1B, kicks off tomorrow, Saturday August 31st, at 7:00pm. We’ll see you there!

Below are some photos of players with substantial finishing stacks. Well done!

While David Neves’ early triple-up was a fantastic way to start, helping him lead the pack midway through the flight, at some point over the last two hours his fortunes changed. When we visited his table just now, he looked to be holding no more than 30,000 chips, perhaps less. Worse, he was in the middle of a battle against Jason James.

This particular hand began with a late-position bet of 4,500 by Jason, which was re-raised by David on the button to 11,000. Jason called, and the flop came down

. Both players checked, revealing a

. The checks were repeated, and the river was dealt a

. Both checked a final time, and when Jason showed his

With just about 20,000 chips left, and less than two levels left to play, the pressure is certainly on for David if he wants to enter Day 2 with a fighting chance. That said, it ain’t over till it’s over!

Alexandre Fortin won the last hand of level 11, and it was a relatively big one. Over the break we were able to confirm that he was indeed the leader. In fact, his 243,000 chips are almost double that of his closest rival. We took a look around the remaining five tables, and no one’s stack really stood out as being worthy of a count. No need for a leaderboard this time – Alex is the leaderboard. 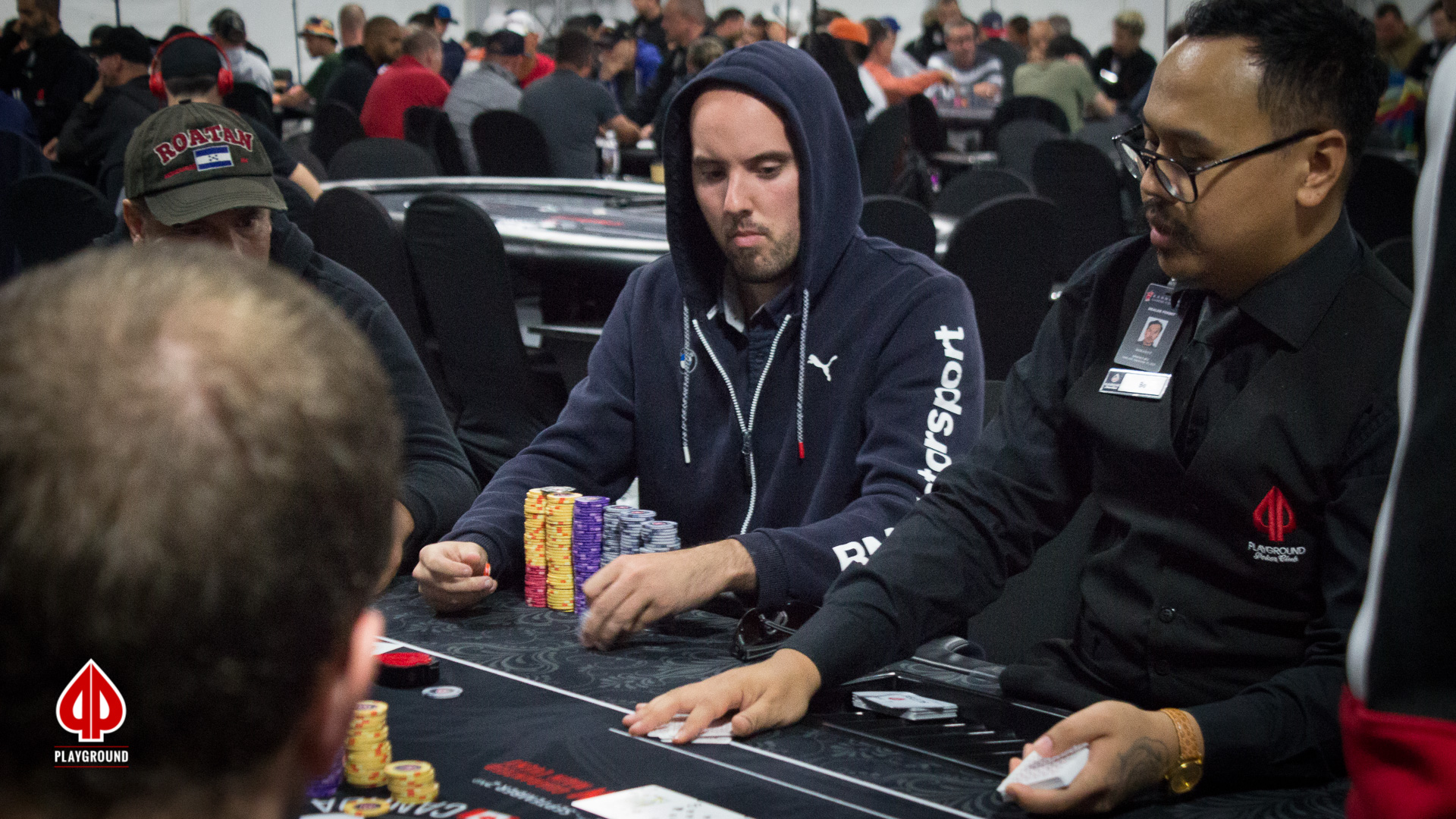 On table 76 we just saw a relatively high-powered hand, including five players seeing the flop, a 50,000 chip jam on the flop and a call from the big stack at the table, one that risked his dominant position.

It began with an opening bet of 4,000 by David Jalbert. That was called by Marcello Iacovella, Dany Noel, Alexandre Fortin and Marc Larouche in the small blind. When the flop came down

, Marc checked to David, who shoved for all his chips, roughly 50,000. Marcello and Dany Folded, but the play didn’t scare Alexandre, who decided to call after 30 seconds of contemplation.

And it was a good call, both figuratively and literally. Flipping over their cards, Alex showed top pair with his

, with David only holding an

. His middle pair with an ace kicker left much to be desired, and when fourth street came down a

, David’s night was as good as over. The river was a

, and David said goodbye. The win propelled Alex to a clear lead in tonight’s flight. With 243,000 chips, his stack is now almost double that of his closest competitor.

After the start of level nine, players no longer have the luxury of a re-entry. Because of that, the size of the field will steadily shrink until the day concludes at the end of level 14. At this point, now nearing the end of level 10, the field has been reduced to only 69 players spread over seven tables.

One of the latest eliminations occurred just now on table 80, where Mike Patenaude busted after moving all in with two pair against a couple of other players. When we arrived at the table Mike had already gone all in with a

board, hoping to triple up against his two callers.

One of his opponents had an

, middle pair with an open-ended straight draw. The other had a similar draw, holding an

. A jack would finish Mike and split the pot between the other two players, and that’s exactly what ended up happening. Fourth street was a

into the lead. The

river changed that, however, chopping the pot and sending Mike home. And the field continues to shrink! While we were writing this post there was a slew of other eliminations, and only 59 players remain at this point

After eight levels of play, David Neves sits atop the leaderboard with 133,000 chips. One of only three players to have accumulated more than 100,000 chips, his earlier triple-up was good for business, catapulting him into the lead. But with six more levels before the end of the night, there is still plenty of poker left to play. Can David keep his lead? 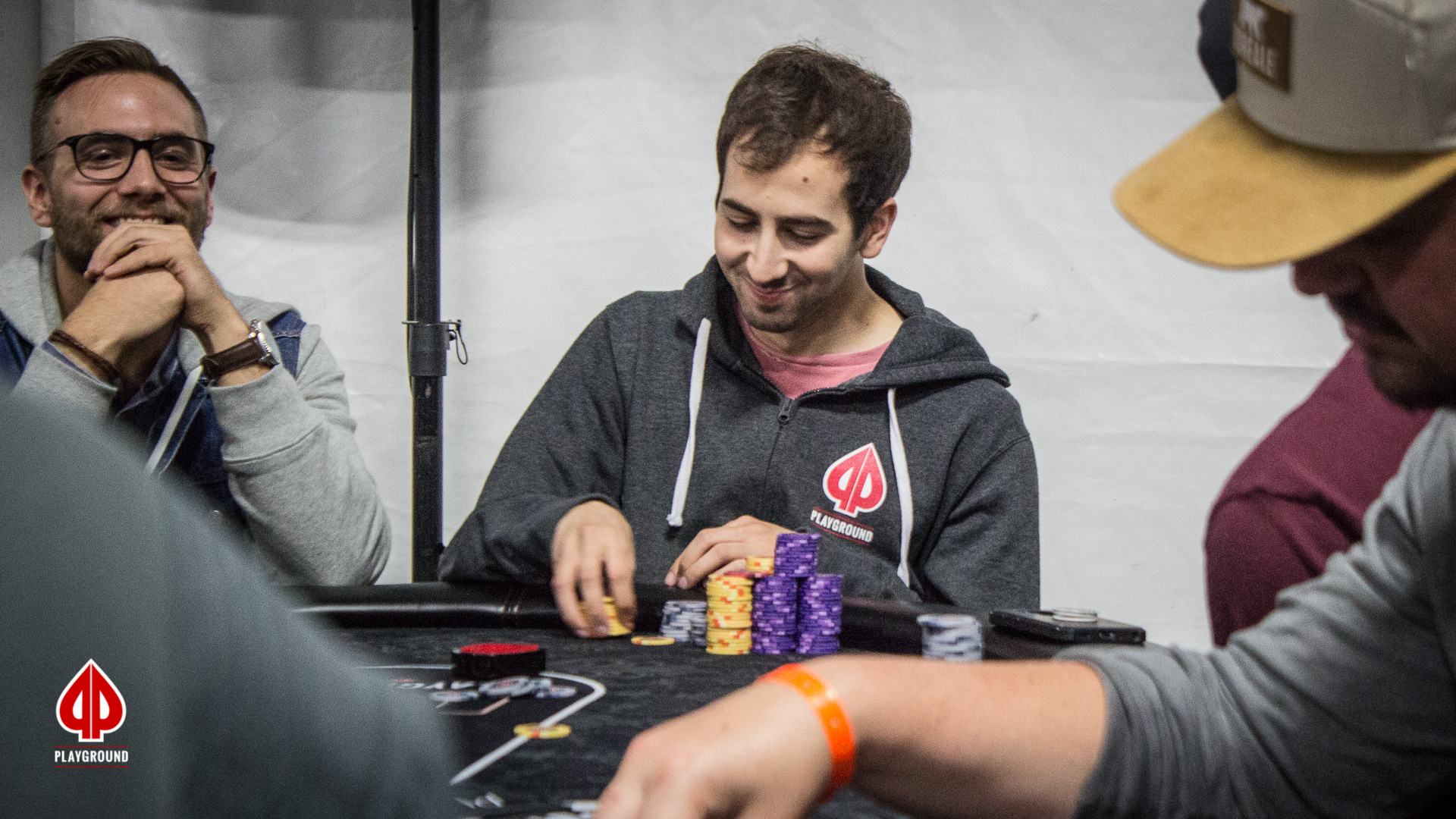 The old saying “All you need to win is a chip and a chair” comes to mind when covering the action on table 76. Former Playground blogmaster Michael Boyle found himself down to just 7,500 chips a few minutes ago when he finally found a half-decent hand. The table folded around to his neighbor on right, Steven Rosen, who was willing to risk it on Mike’s preflop shove.

Both players flipped over their cards and it was Mike’s queens versus Steve’s sixes. The queens ended up holding out, giving Mike a little breathing room. Mike scooped the pot, doubling his chip stack and extending his chances just a little further. Can he double up again? We’ll be keeping an eye on his table to find out!

In only a few minutes players will go on their second break of the evening, which is also the end of late registration. Good luck to all of our players as they make their way into the final six levels of the evening.

As we passed by table 75 just now we noticed more than the usual amount of chips in the middle. It turned out that we had happened upon a three-way all-in, one in which David Neves faced off against Denis Giguere and Ben Menache. Showing on the board was a

, and Denis was hoping for a third spade to drop on the river, as he was holding a

. He faced off against Menache’s pocket sixes and Neves’ pocket tens.

Unfortunately for everyone except David, the river was a dud, and Mr. Neves tripled up and simultaneously sent two players packing. As we reach the end of level seven, David is in a much stronger position. We’ll keep an eye on the table to see if he can maintain the momentum. 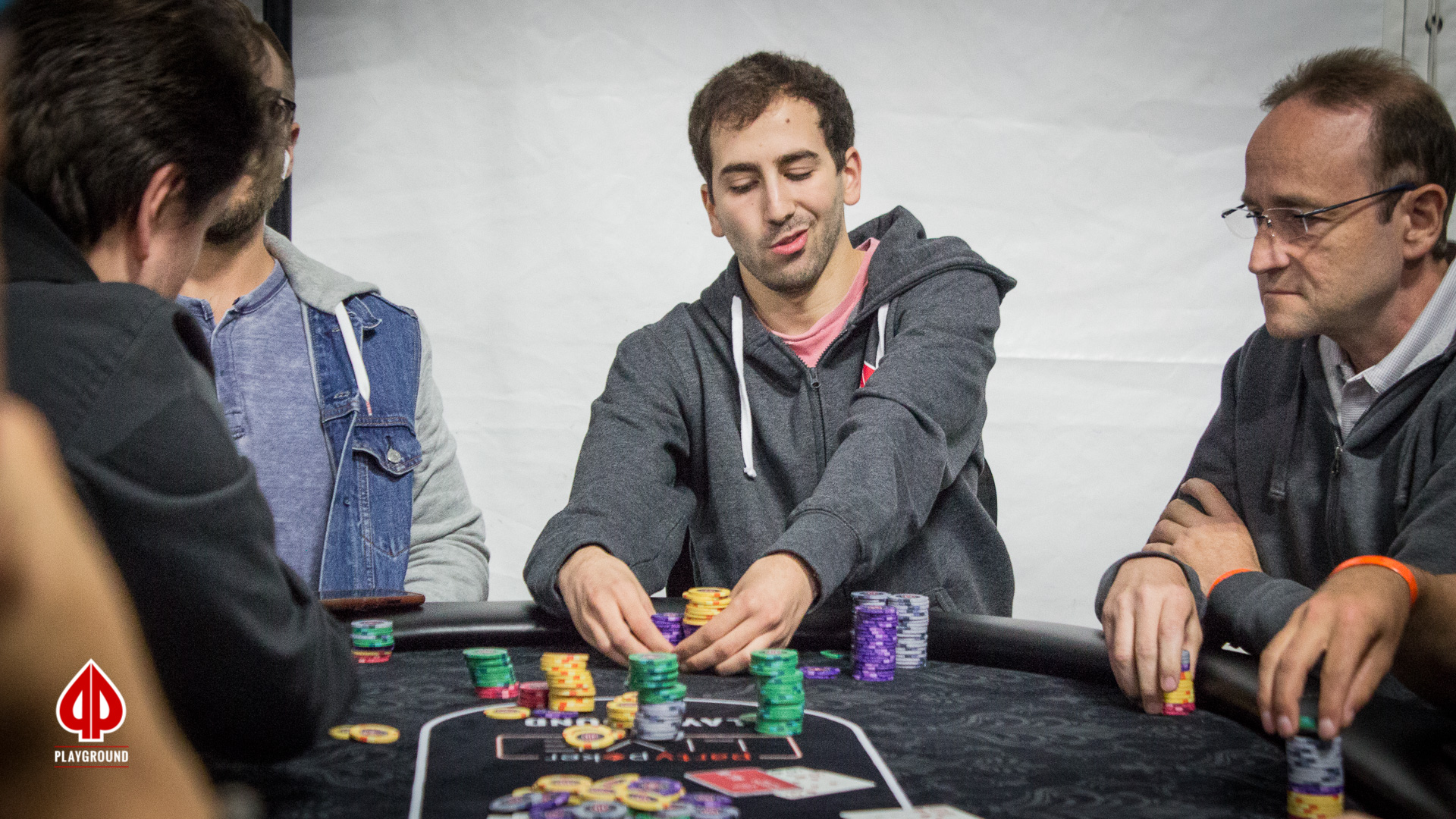 As we were walking between the rows of busy tables here at the $300 + $30 Closer Day 1A, we noticed an all-in hand at table 85 and paused to see how it would shake out. Francis Chevalier faced off against Anthony Ribeiro (pictured below) and the dealer had just laid down the river card.

Anthony, who is fresh off of fifth place cash in the Super High Roller event yesterday, is a strong player not to be underestimated. Francis revealed his hole cards, showing that he had made top pair on the jack-high board. However, Anthony flipped over a triumphant pair of pocket kings, ending Francis’ night. Exhaling a disappointed sigh, Francis took a walk, not expecting his sudden exit. 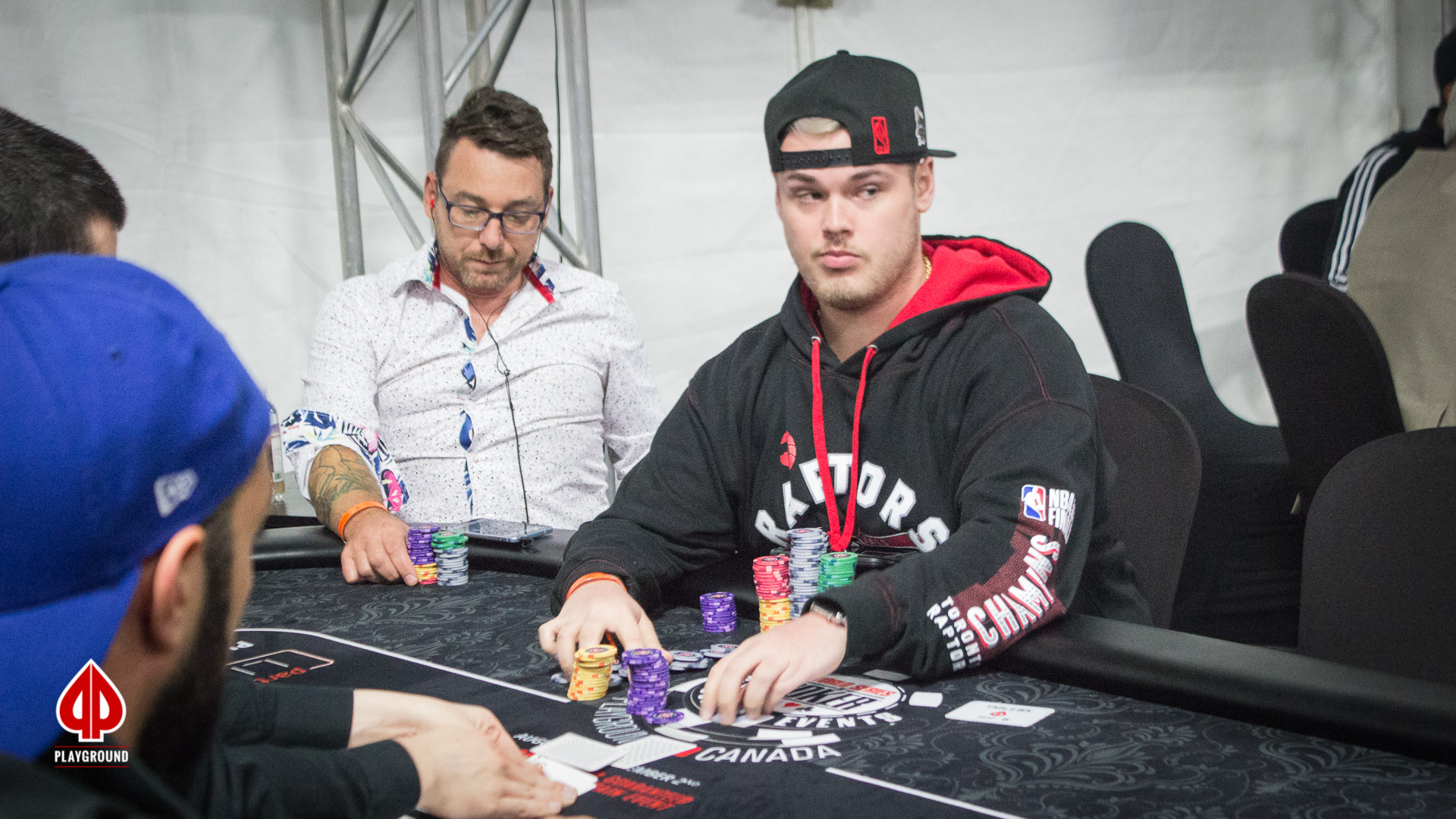 So far we’ve completed four of the 14 levels we will be playing today, and the competitors have just returned from their first break. After a quick review of the chip stacks we determined that the early leader is Jason James, having collected 112,625 chips. Well done! He is far and away the largest stack in the room, with no one else even hitting the 100,000 chip mark yet. Good luck to all as we move forward! 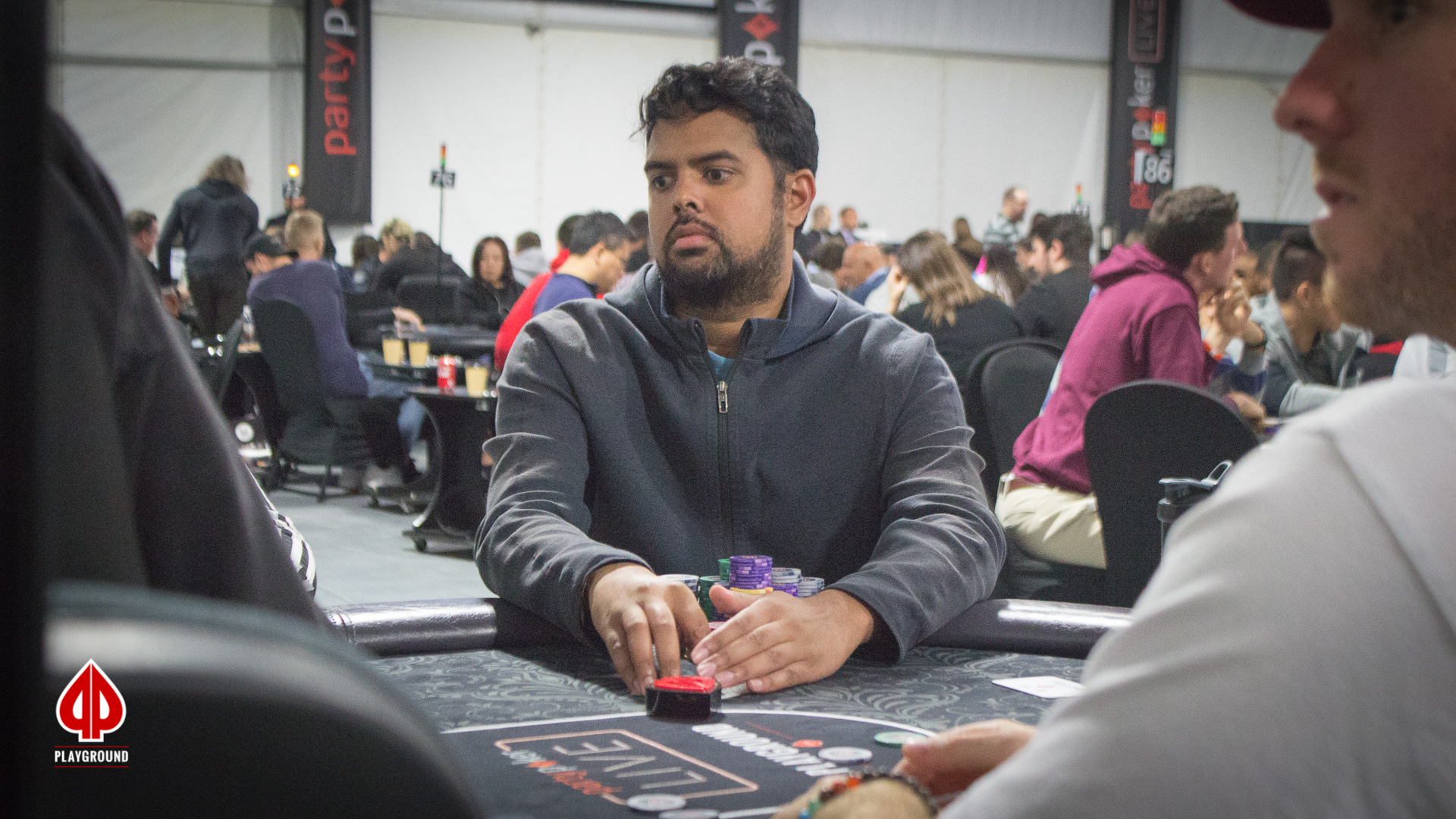 We’ve almost hit 150 entries so far in the $300 + $30 Closer Day 1A, and the action is heating up as we make our way towards the first break. Players are joking around with one another and the drinks are starting to flow, as many of them have become friendly with one another over the last week of WSOP-C Playground action.

Stay tuned for a list of the chip leaders, coming up shortly. Below are some more photos of our competitors as they battle it out.

Here at the WSOP-C Playground $300 + $30 Closer Day 1A, we’re already into level 3. So far we have had 121 entries, with several players buying in multiple times in just the first hour. Here are some photos of our competitors as they make their way through the early levels. And remember: this flight has unlimited re-entries until 10:30pm, so get down here and join the action!