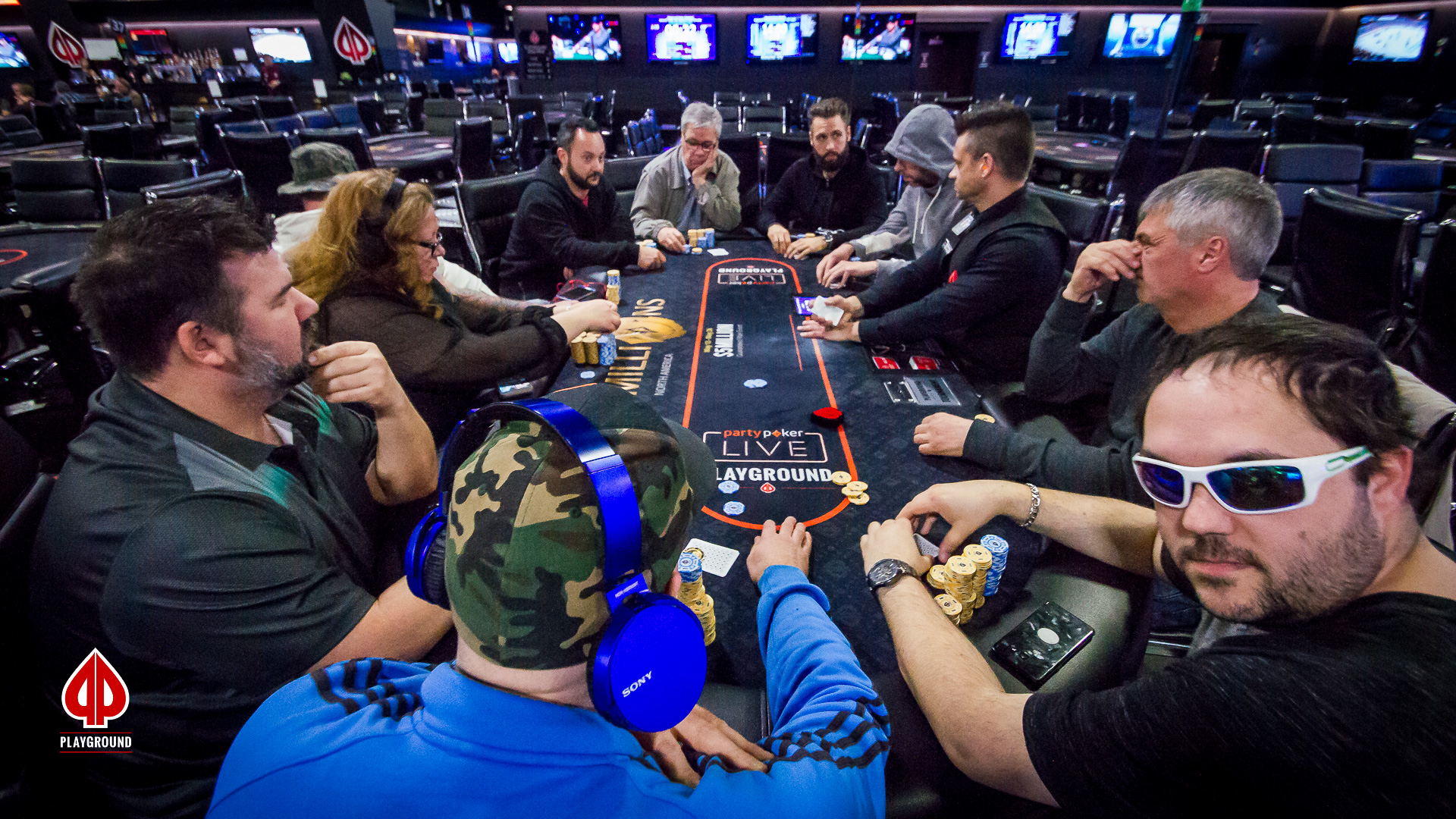 The tournament heated up after the final break of the night and stacks started to grow. There were a few of the usual coolers along the way, with Aces getting cracked more than once. The play was aggressive as everyone wanted the top prize of $3,443, and not just settle for a min-cash of $260.

When the final table was finally formed, it only took about 20 minutes or so to reach 6 players. There were many stacks similar to each other and the players decided to look at the ICM chip chop numbers as there was good money up top, but the players were not so excited at the prospect of potentially being the next bustout, which was only paying out $860. The floor staff crunched the numbers, and, reminded the players that 2% of the prize ($300) would also have to be left for the eventual winner. After a minute or two of discussion, the 6 remaining players decided to go ahead with the ICM deal and play on to the end for the extra $300 along with the champion bragging rights.

Once the deal was made, play opened up and the bustouts happened pretty rapidly. When it was 3-handed, Joey Boczek picked up AA but ended up chopping when the board made a straight, and, he then busted out in 3rd place just a few hands later.

Heads-up play didn’t last very long at all. On the final hand of play, Philip Fleury-Maisonneuve picked up

and put his chips into the middle. Roger Thibault looked down at his hand and after seeing an Ace, he made the call with

and the board was tabled.

. Roger hit his 9 and was way ahead and looked like he would win, unless some miracle was in store for Philip.

.  Philip was looking at defeat, and asked the dealer to put out any diamond on the river so that they could chop.

and boom, Philip made a set on the river.  He almost fell to the floor as he couldn’t believe his luck, after all, he thought it was game over when he saw the flop.

Here are the payouts of all of the 13 players who were in the money (NB: the top 6 finishers were paid out as per the ICM chip chop including an additional $300 added to the 1st place payout): 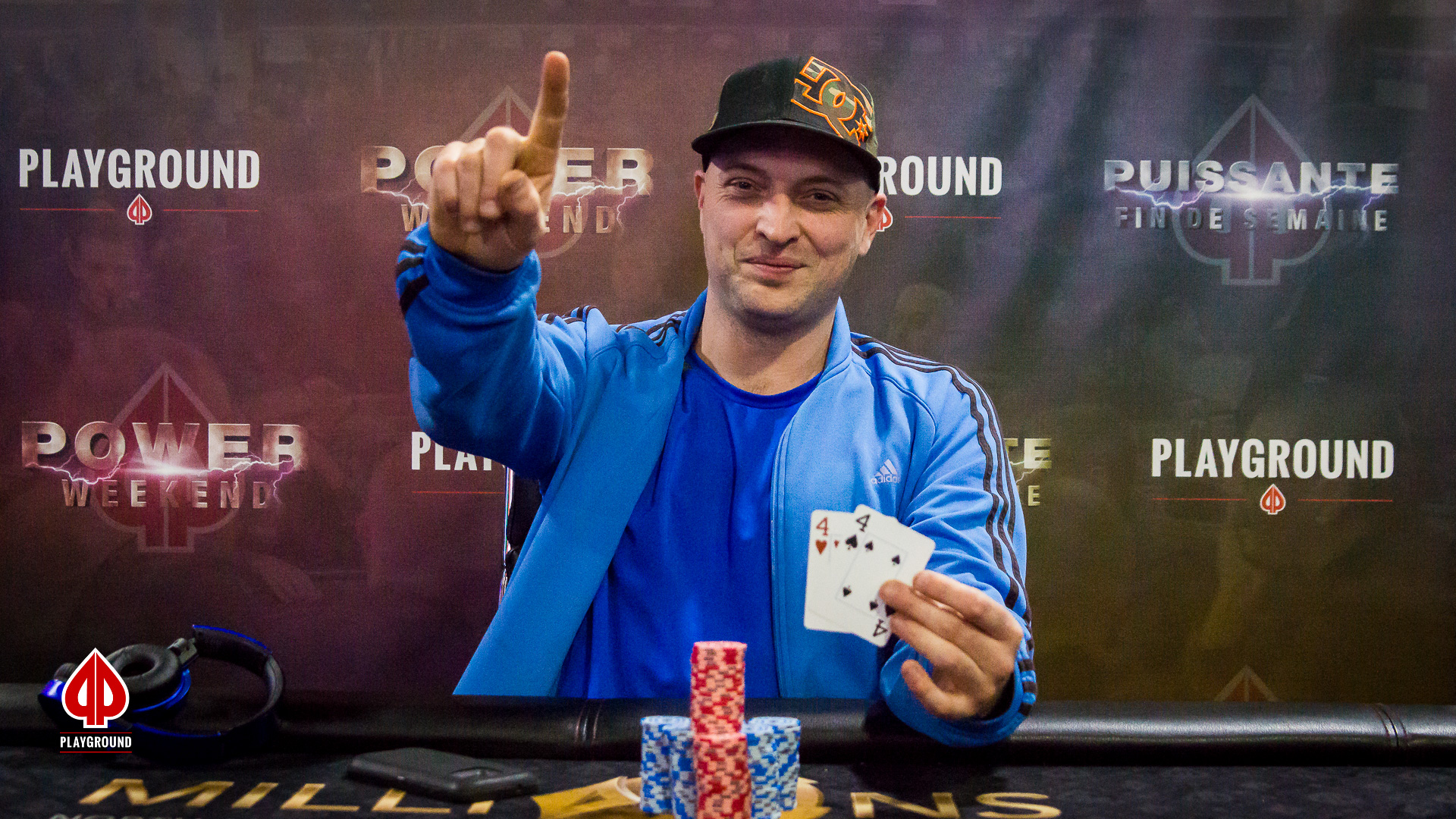 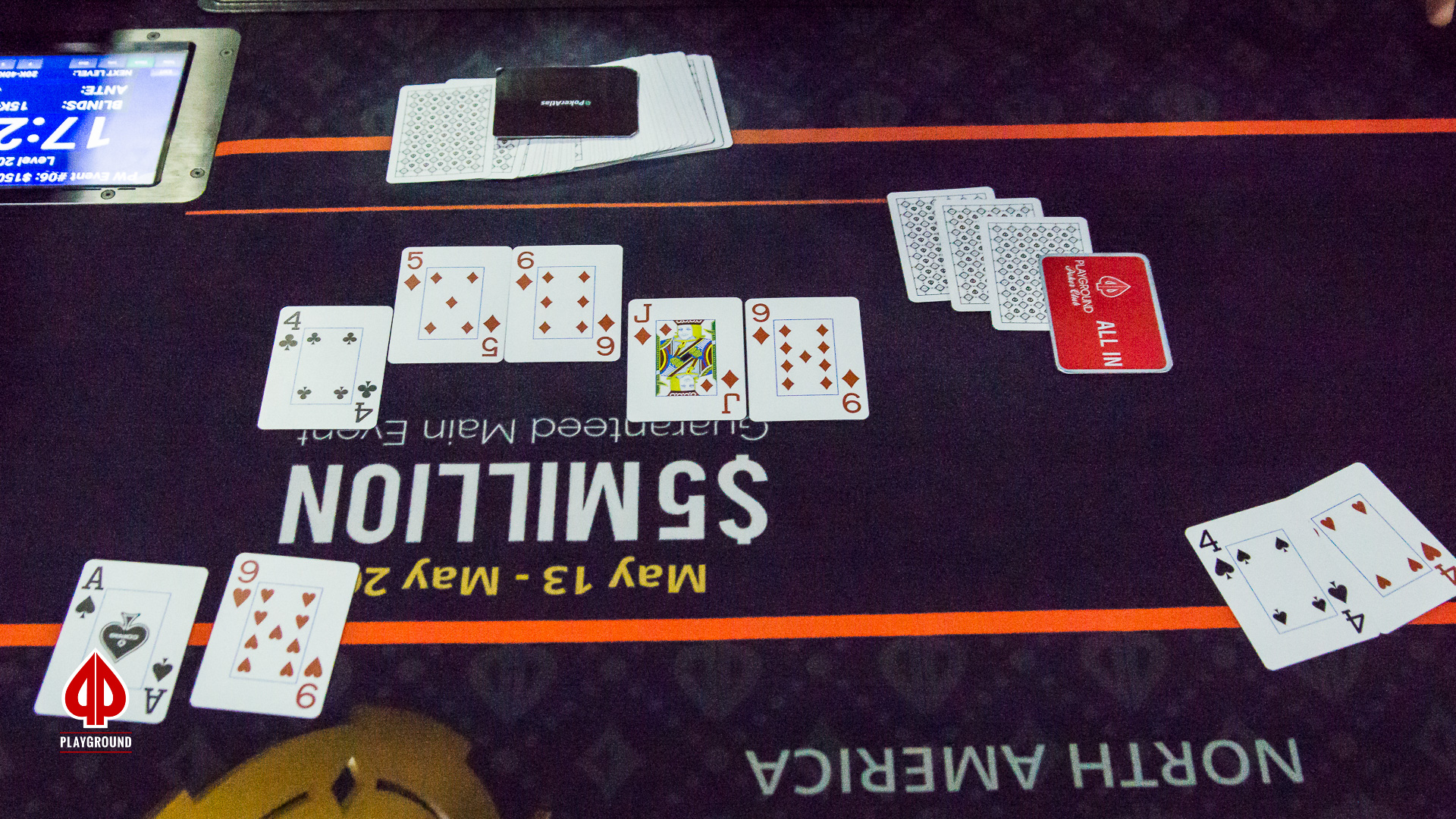 Where as we often see a few monster stacks by the 2nd break, the tournament has been playing at a steady pace and only 2 players have been able to exceed the 100k mark, with Ben Menache taking the reigns as the new chip leader, sitting on a cool 143,500 chipstack, almost 3x the average. His next closet rival is Pauline Briand (101,500), who is the only other player north of 100k.

As play continues, we will keep monitoring the action and the stacks and are sure to see some changes each level passes. 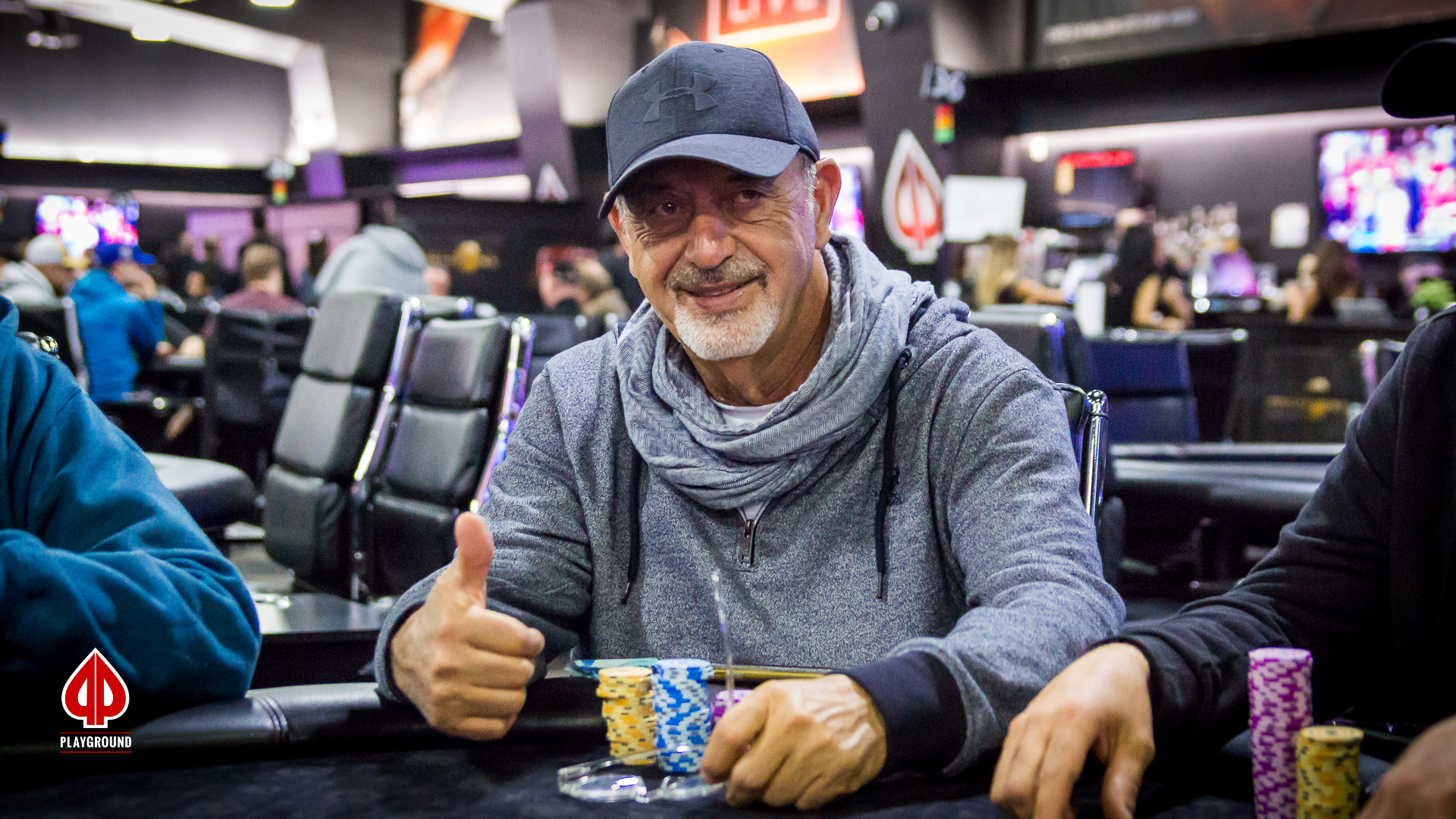 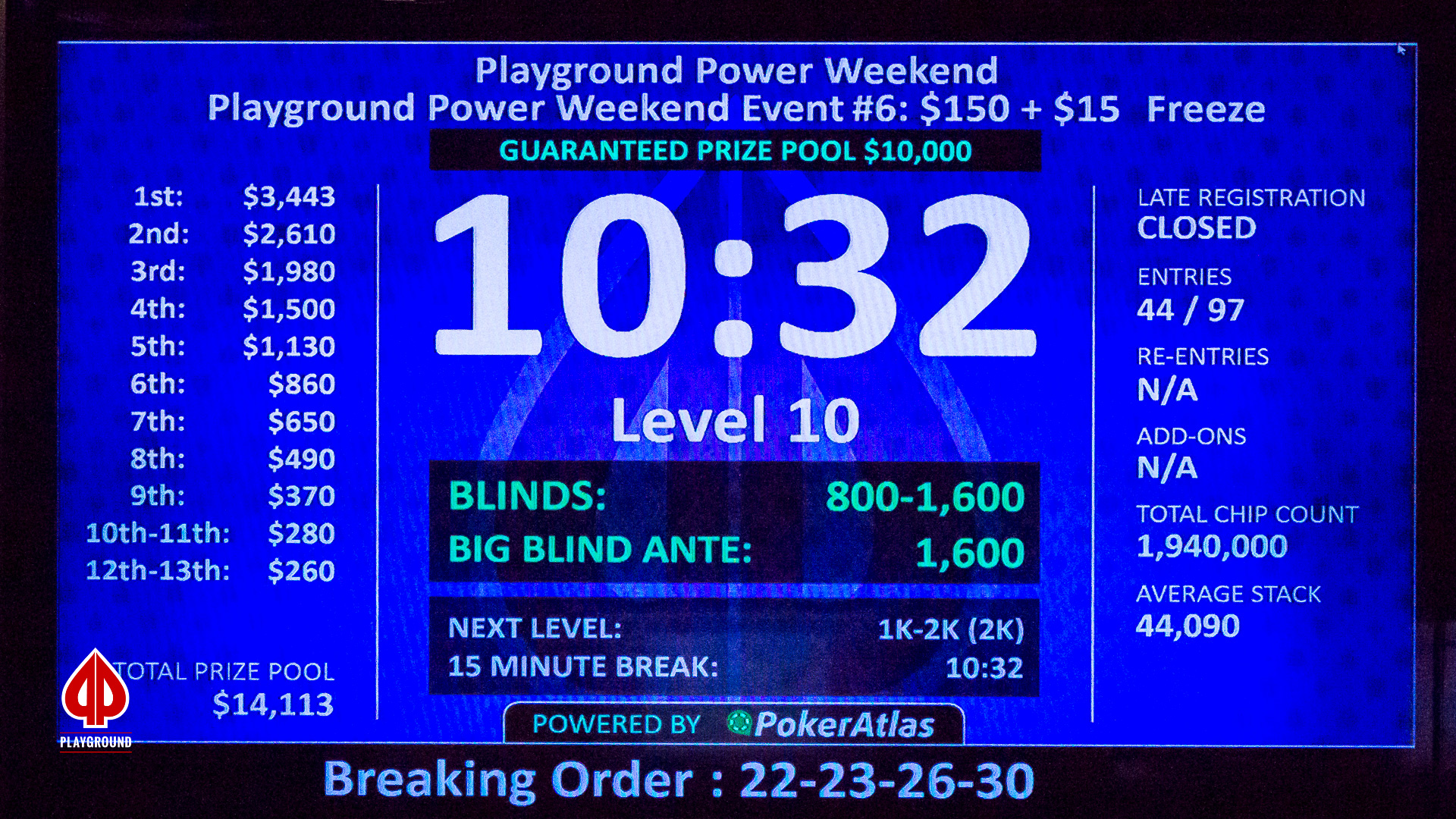 Late registration has now closed and there are a total 97 players entered of which 68 are still in contention.  The $10,000 guaranteed prize pool has been surpassed and players fighting it out for a total of $14,113!

During the break we took a walk around the room to survey the chipstacks, and with an average stack of close to 29,000, our eyes were on the lookout for any of the stacks above 60,000.  The man on top is  Raffi Garabetian, sitting on 88,800, almost 3x the average. He is followed closely by Ben Menache and David Journo.  With lots of poker still to be played out, it is still anyone’s game and we will keep an eye on the field to see if anyone else joins the leaderboard. 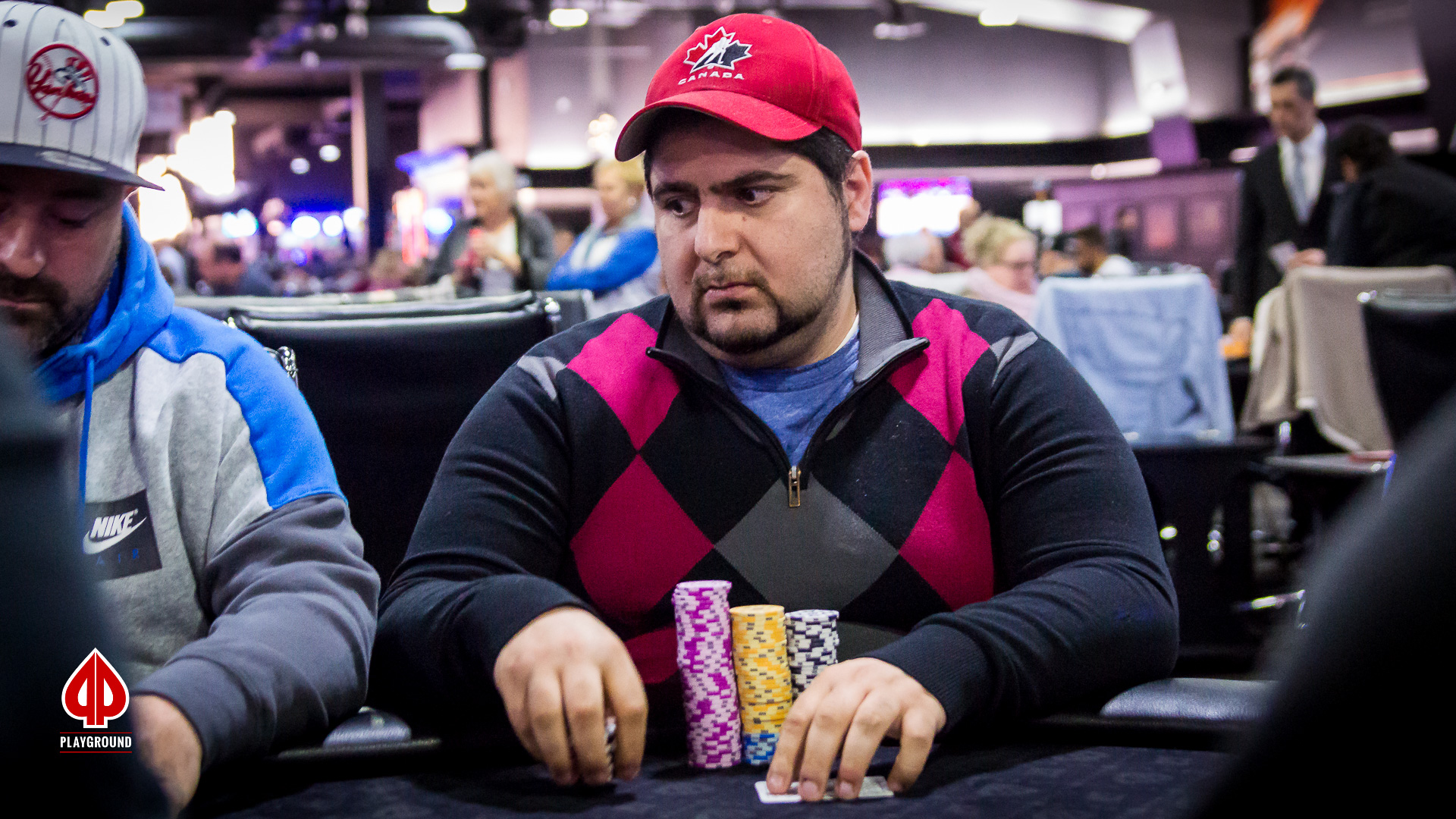 The tournament director has just announced “Dealers, shuffle up and deal” in tonight’s $150 + $15 Event #6. Players start with 20,000 chips, blind levels are 20 minutes long, and since this is a “freezeout” format, there are no re-entries available, meaning that you will have only 1 bullet available to fire, which makes for conservative play in the early levels. It is therefore well worthwhile to jump into the action early on and start building your stack.  The tournament offers a guaranteed $10,000 prize pool, so there will be some good payouts for sure.

Late registration will remain open until the end of the 15 minute break after level 6, which will be at 9:15pm.