Event #2, Strangers in the Night, was the marquee event of the May Power Weekend, offering three Day 1 starting flights, and a guaranteed prize pool of $50,000, that ended up being surpassed, generating in total a prize pool of $53,835, and paying out the top 47 places. After the three Day 1’s were played out, 76 players returned on Saturday May 4th for Day 2, and when the day was over, eight players were still left standing who returned today for Day 3.

Robert Gariepy was the chip leader at the start of Day 2, and, was one of the eight who returned today. As play went three handed, Mohammadamin Khalilian had a massive lead over both Gariepy and Adam Cader, another solid and accomplished local player. Robert Gariepy had lost some steam but then gained it back once he knocked out Khalilian.

As heads up play started between Gariepy and Cader, it seemed like it would be a really tough job for Cader, however, he never gave up and kept waiting for some key spots to make his moves. After Adam doubled up two times in a short period with his pocket Kings and then with AQ, he was then in a commanding position and had his sights firmly placed on the top prize of $11,285. Gariepy needed to make a come back, but it wasn’t meant to be.

In the final hand of play, Gariepy felt that the timing was right when he looked down at

. Unfortunately for him, Cader woke up with

and both stacks got into the middle with Cader way ahead.

, and, the tournament ended, crowning the Event #2 champion, Adam Cader. 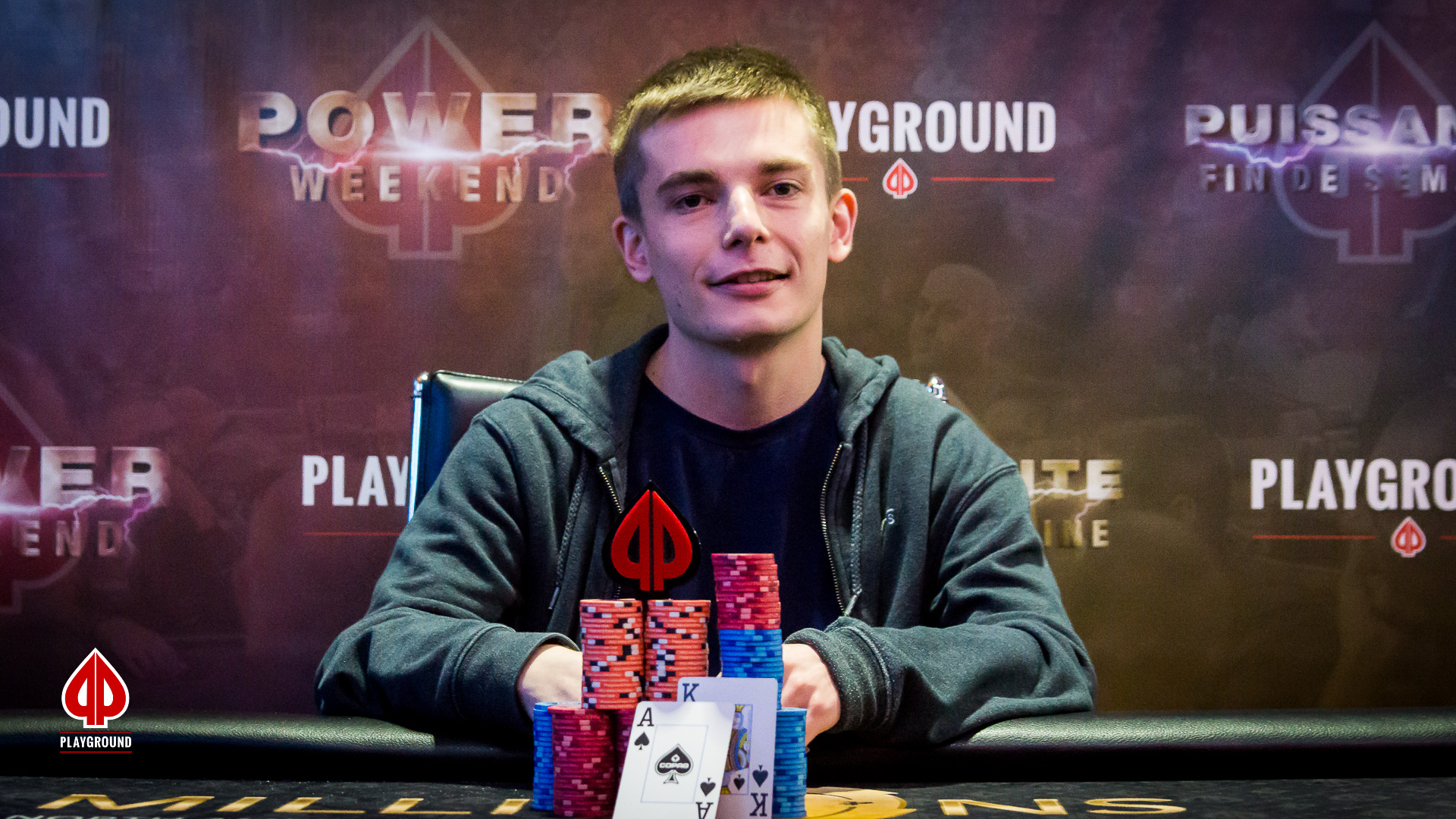 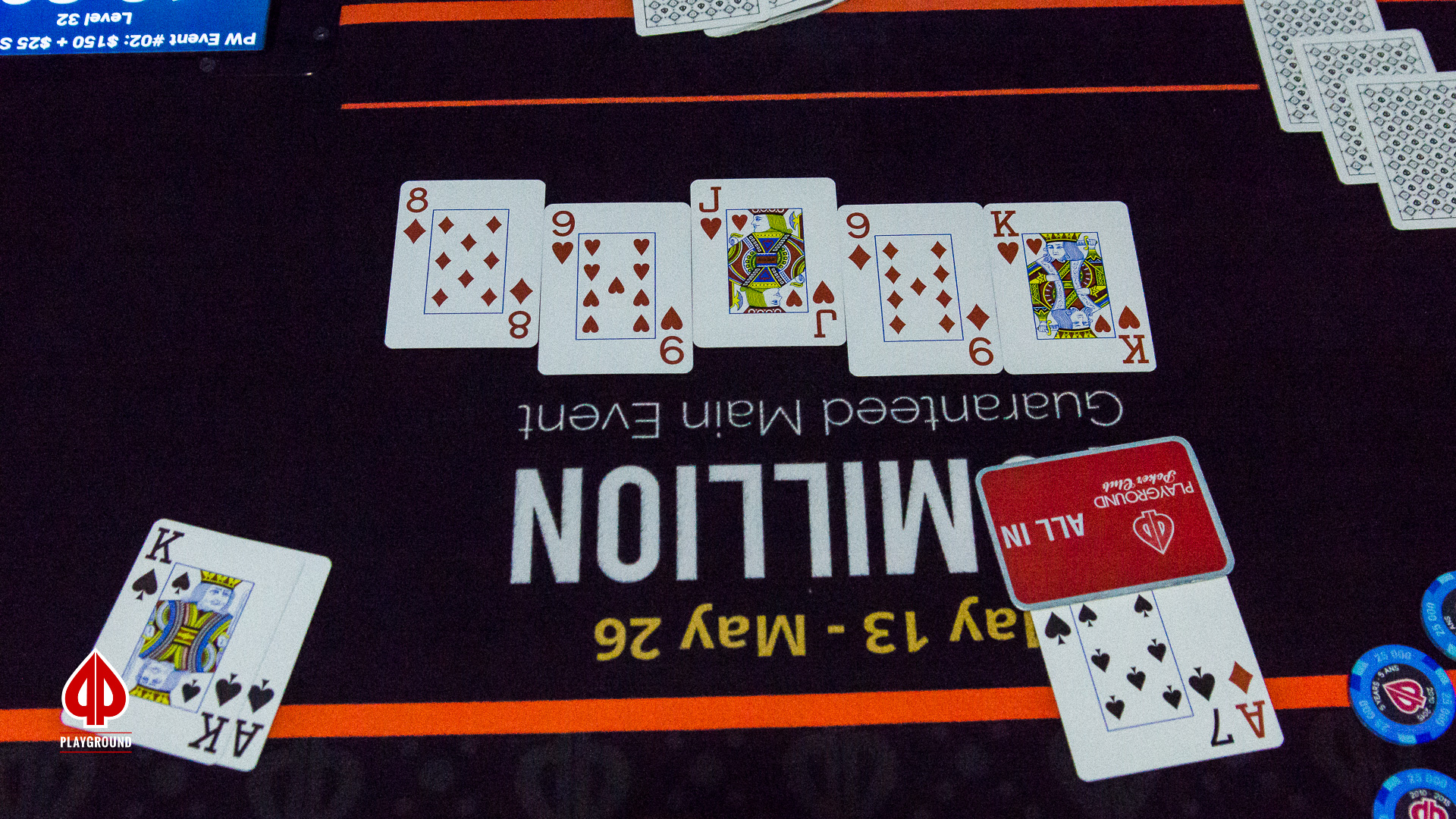 Heads-up action started with Robert Gariepy having a massive chip lead over seasoned veteran Adam Cader. Action was calm for quite a few orbits, with Gariepy raising and Cader folding most of his hands.

Then it happened. Gariepy shoved his button and was insta-called by Cader who had picked up a premium hand, Gariepy had shoved Ace high and Cader found pocket cowboys (KK) to score a badly needed double up.

A few hands later, once again Gariepy shoved and found a call by Cader.

Adam was way ahead and just needed a clean board for another huge double-up.

With two huge double ups, Adam Cader is now in front with the chip lead, as told by the big smile on his face. 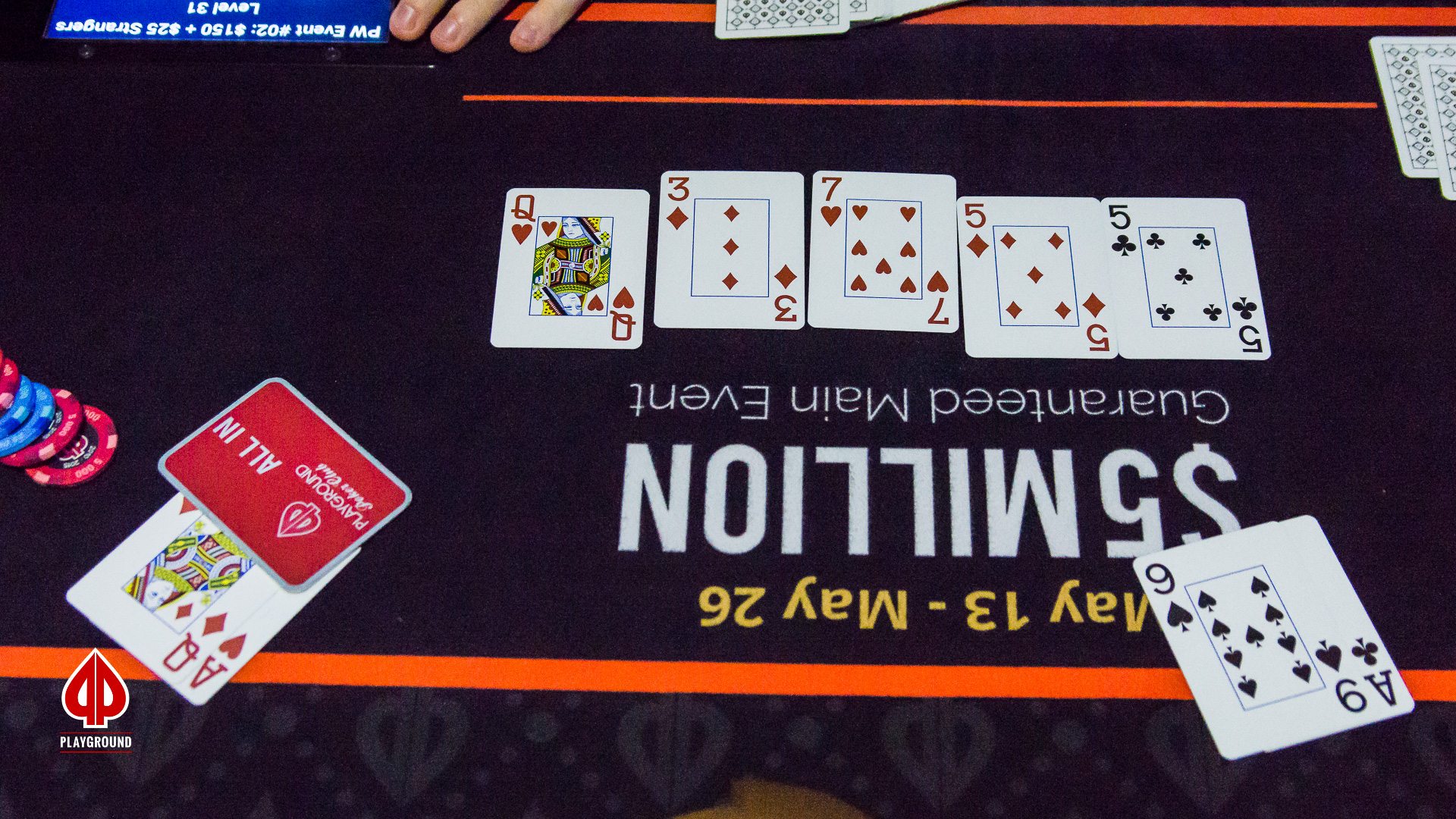 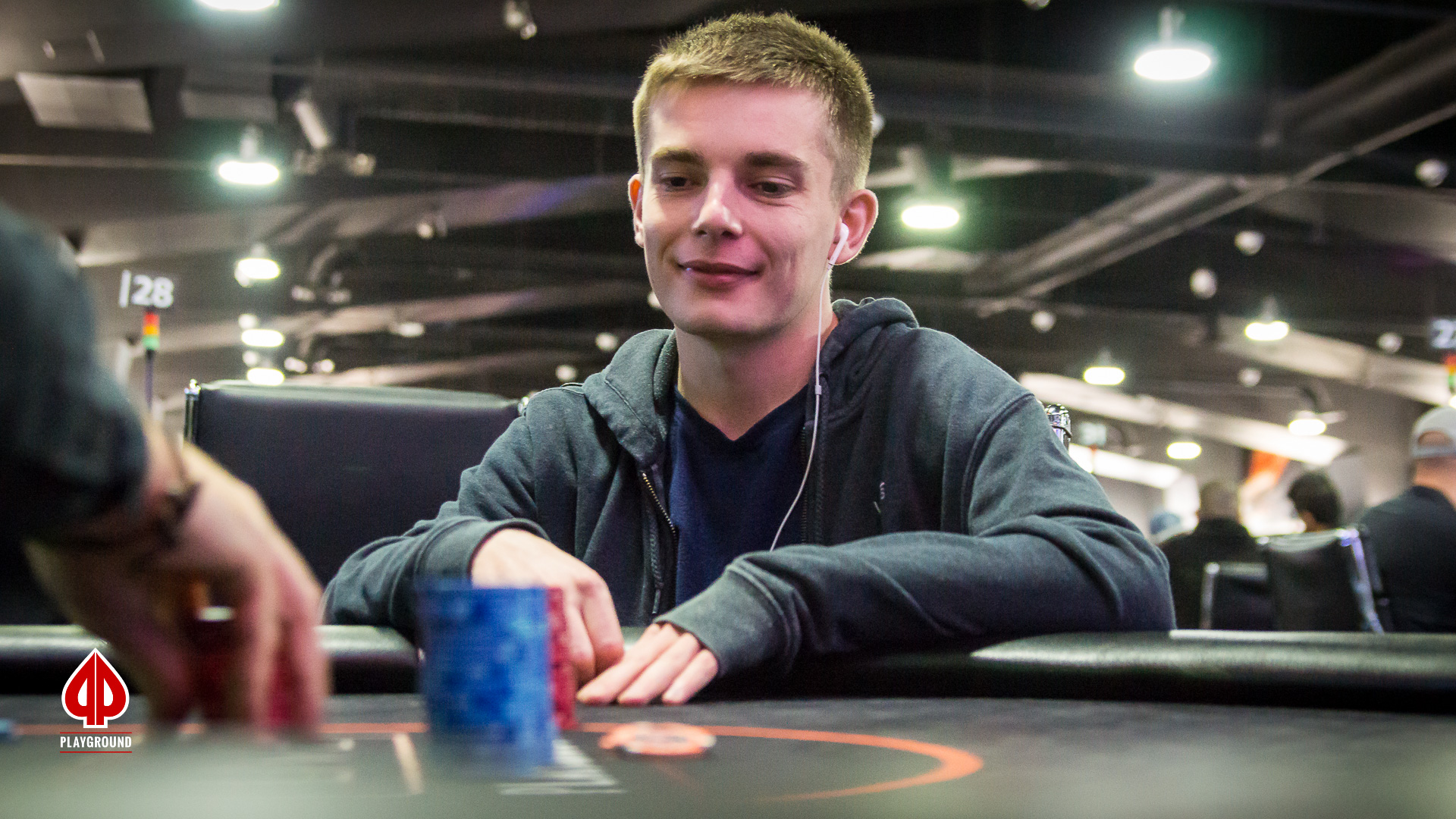 It finally happened! Gariepy has been waiting patiently all afternoon to find the right spot(s) to get it in. After doubling against Khalilian and then chipping up even more against him, he just picked up a monster and knocked out Khalilian to take the lead heads up.

Khalilian thought he saw the right opportunity to get back some chips and shoved his hand, only to be snap called by Gariepy who looked down at his hand to see a dream hand.

With a clean run out, Gariepy knocked out Khalilian and is now the chip leader heads up against Adam Cader. 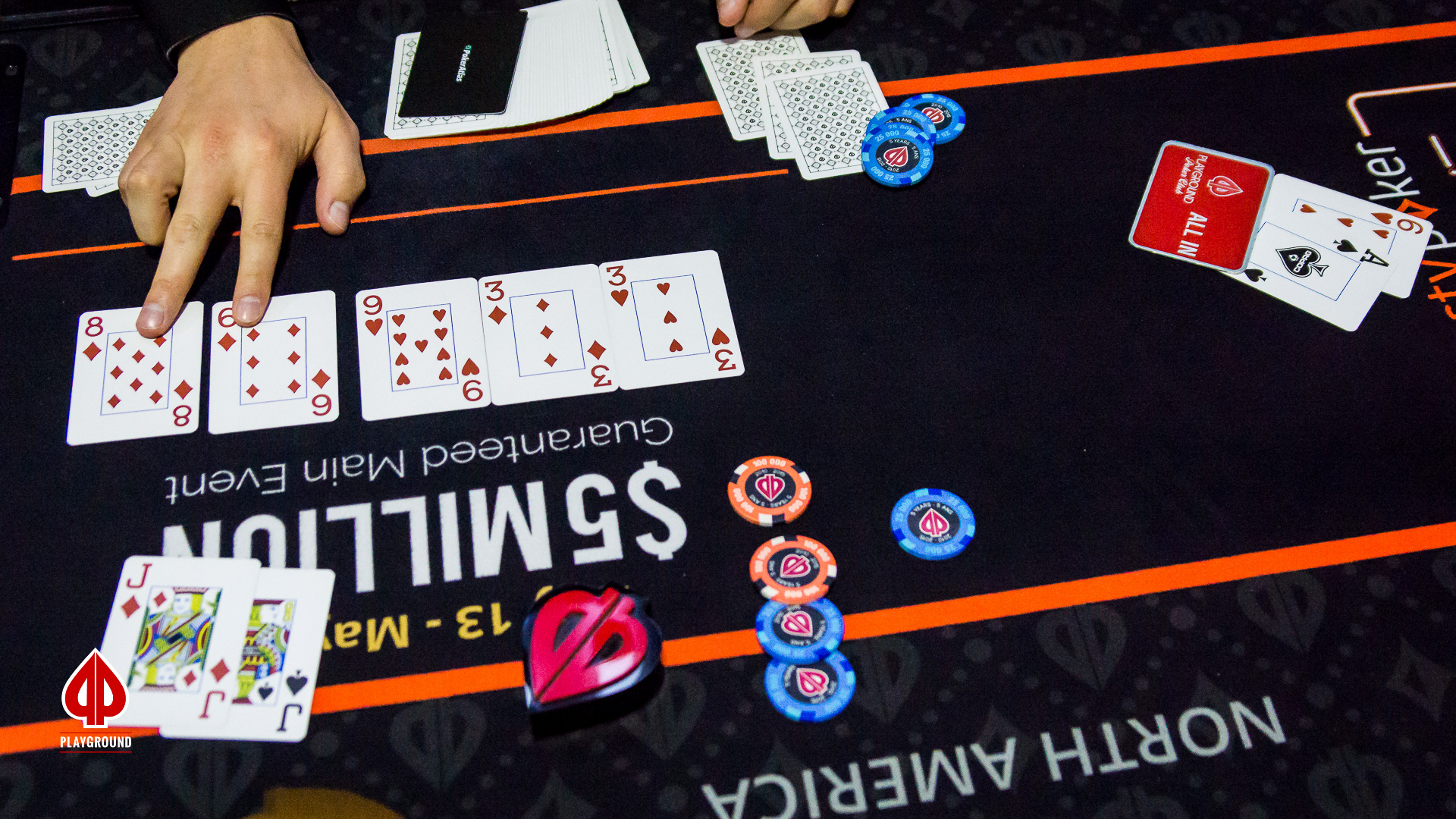 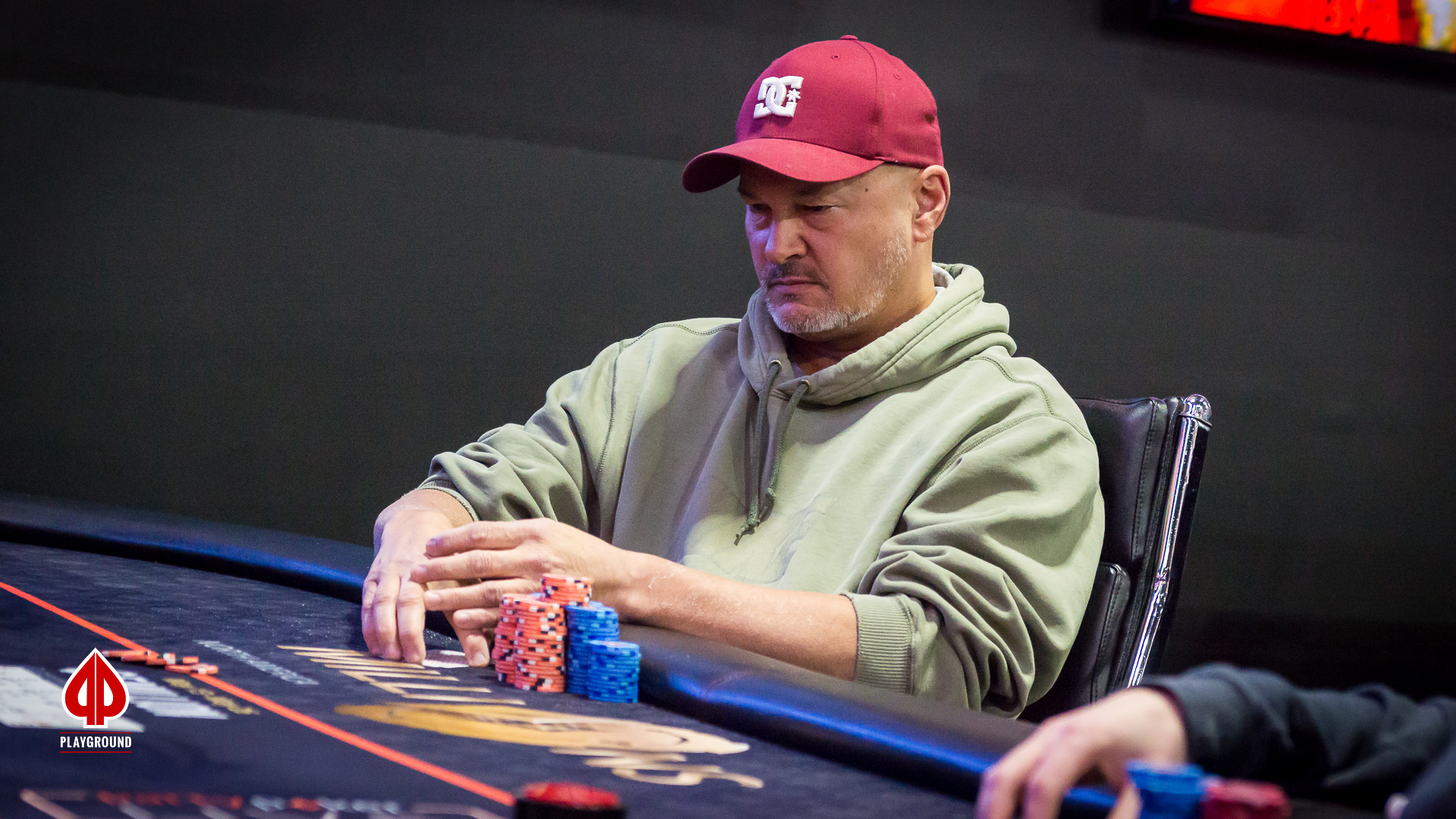 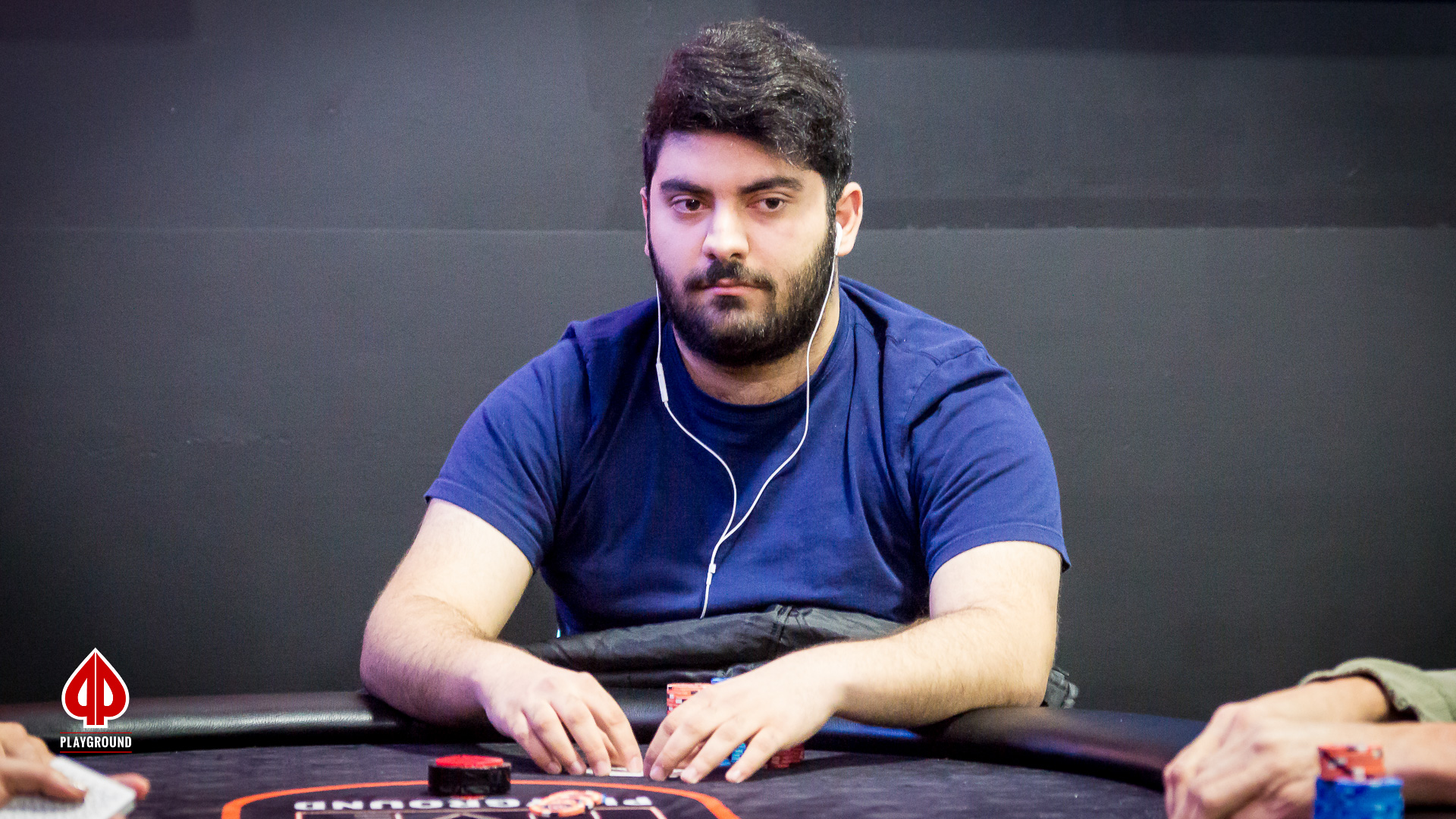 It was bound to happen; Gariepy finally was able to to put the brakes on to Khalilian and take a massive amount of chips from him.

Khalilian raised it up and Gariepy moved all in, and found a quick call by Khalilian. The cards were tabled and the dealer spread out the board.

and with the Ace in the window, Gariepy moved way out in front to take the lead.
Turn:

Gariepy takes a nice and badly needed double up of just over 1.7mil chips.

A few hands later, Khalilian raised his button to 600K, and Gariepy then snap shoved from the blind. After thinking it threw for a few seconds, Khalilian let go of his hand.

Gariepy, who was the chip leader of Day 1, is back in the game with a good increase to his stack, and Khalilian has finally had a change in his run good. 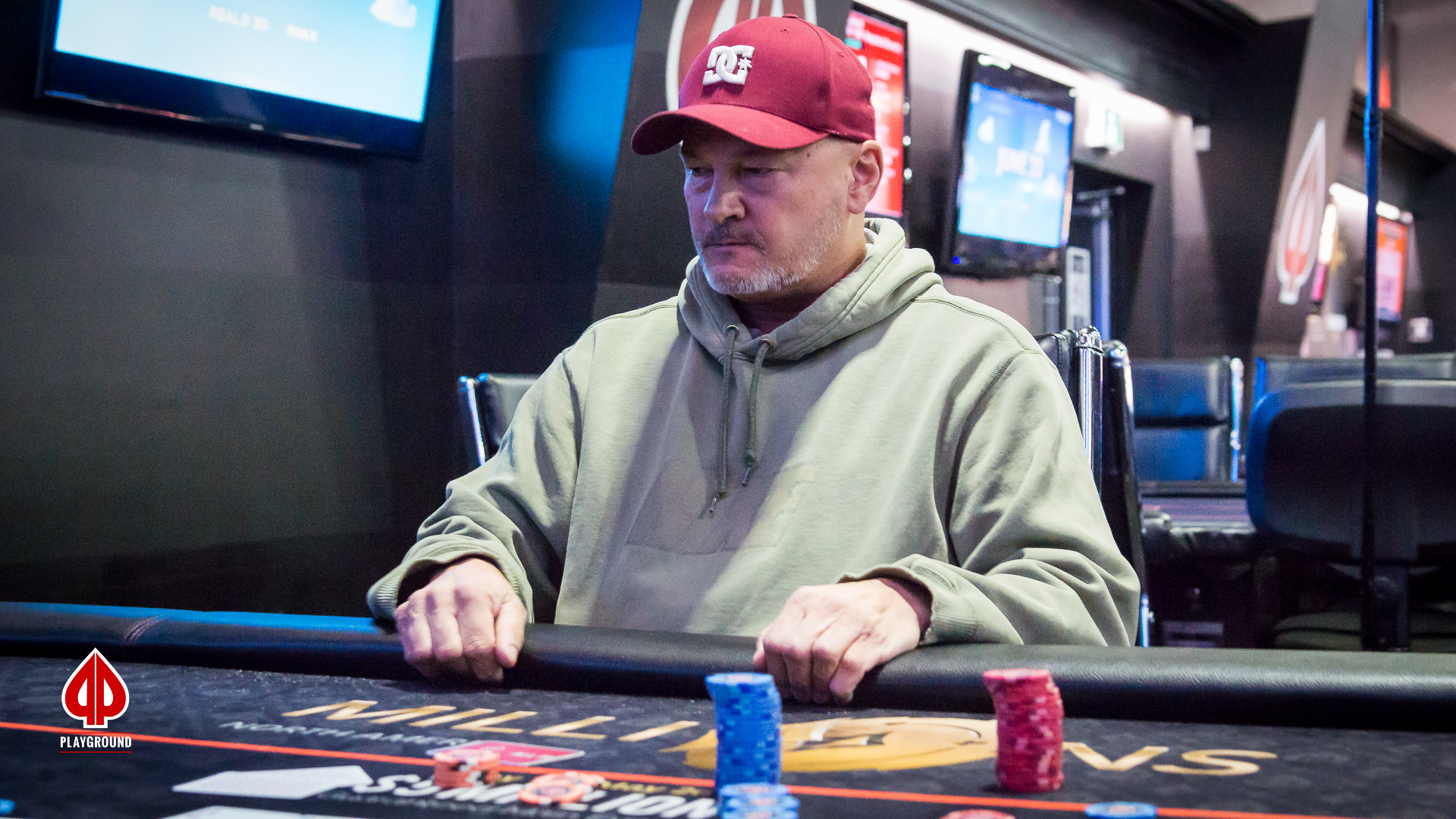 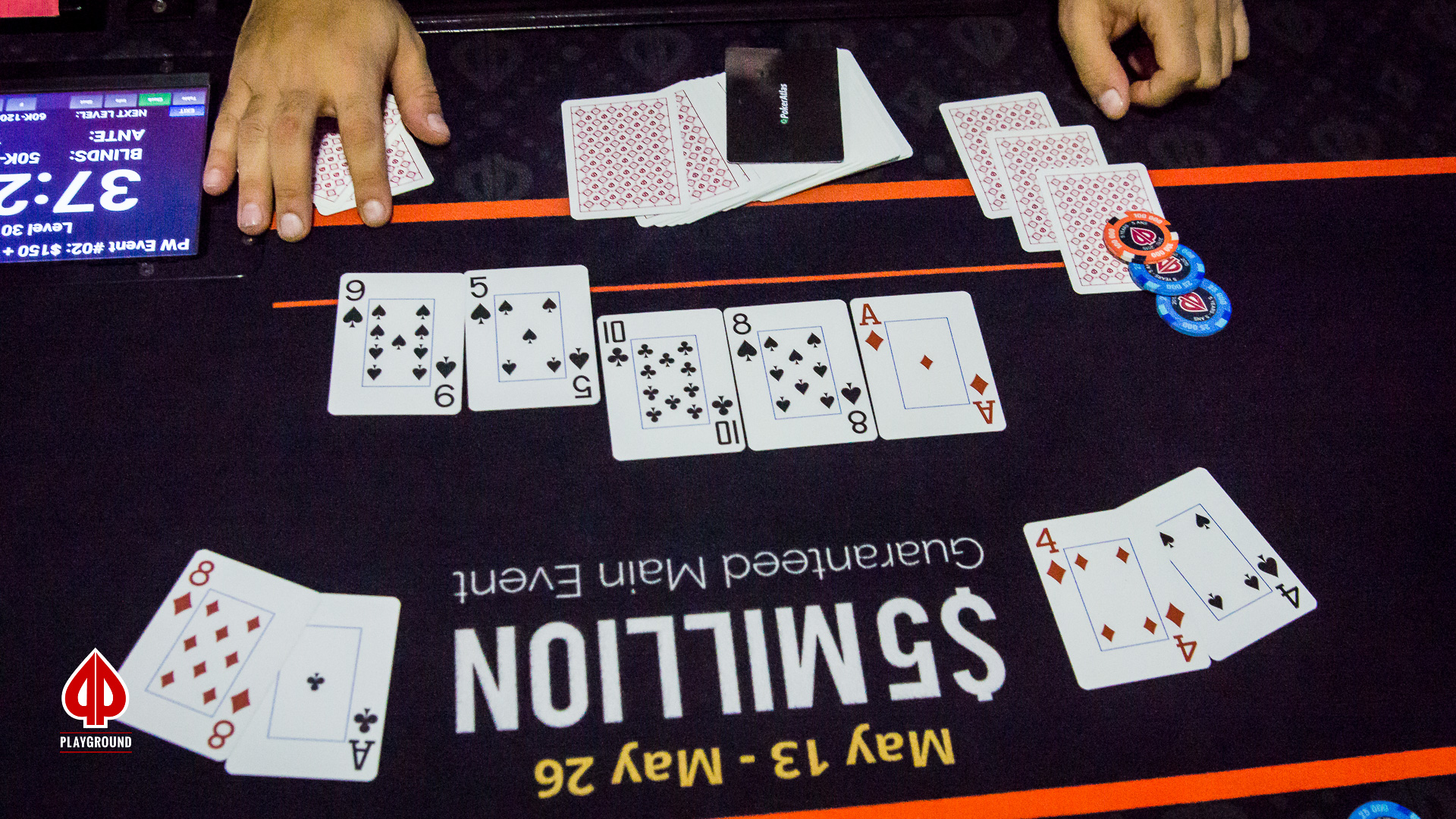 The players are seeing flops but it seems like each time, Mohammadadin not only joins the action but also outflops his opponent, or, gets there on the river. He has also been shoving many times on the turn to simply shut down the action, and with huge pay jumps in the last three prize pool payouts, Gariepy and Cader have been folding.

Gariepy folded his button, and Cader completed his option in the small blind. Mohammadadin min-raised his big blind to 180K and had a call by Cader.

, Cader checked, Mohammadadin bet out 210K and Cader made the call.

and Adam Cader checked, followed by a bet of 250K by Mohammadadin Khalilian, to which Adam called.

and action went check-check. Khalilian opened his hand to show

That seems to be how the last 30 minutes of play has been going for Khalilian, who almost seems to be unstoppable. Gariepy and Cader though are not discouraged and are waiting for the right spot to set their trap.

Mohammadamin Khalilian is still in the lead, and Adam Cader, a well known local online and live grinder, has chipped up over the last hour and now is slightly ahead of Robert Gariepy. All three players left in running are highly skilled and know how to play a final table, so the there have been no major mistakes being made and although Mohammadamin has a commanding lead, any of the three can end up winning the $11,285 up top along with the champion bragging rights. 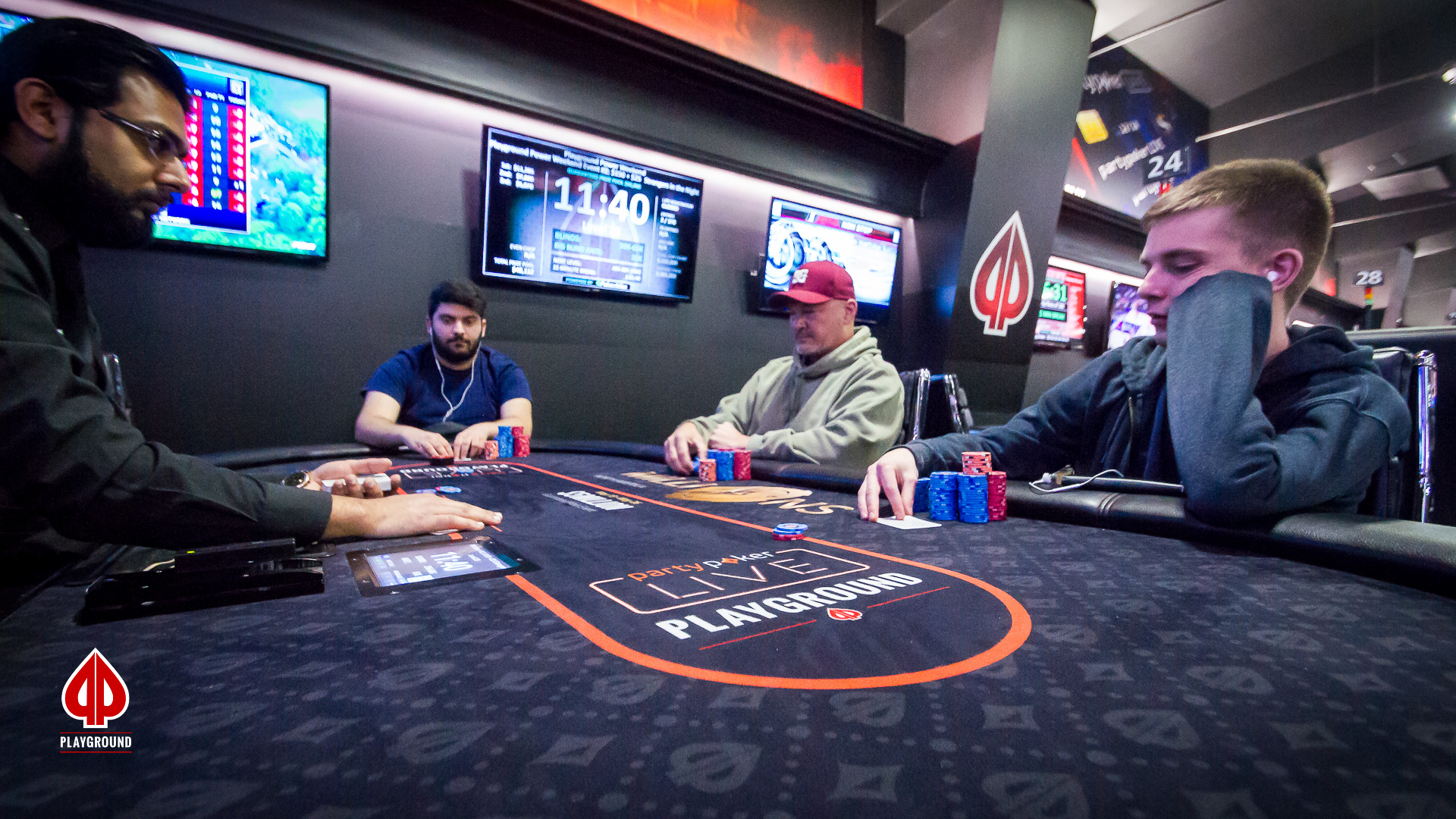 Mohammadamin has had the dominant stack on the table and he keeps increasing it as play moves forward. Vsevolod Malamud woke up with an Ace (A9) and moved all in, only to be snap called by Mohammadamin holding pocket Kings. Malamud takes home $2,560 for his 5th place finish and Mohammadamin keeps adding more chips to his stack.

Just a few hands later, Dany Noel also looked down at A9, and once again tried to see if A high was good enough to steal the blinds. Robert Gariepy picked up 66 and made the call, and his pocket pair held, knocking out Noel in 4th ($3,330).

A9 is not looking good currently but that can always change…. 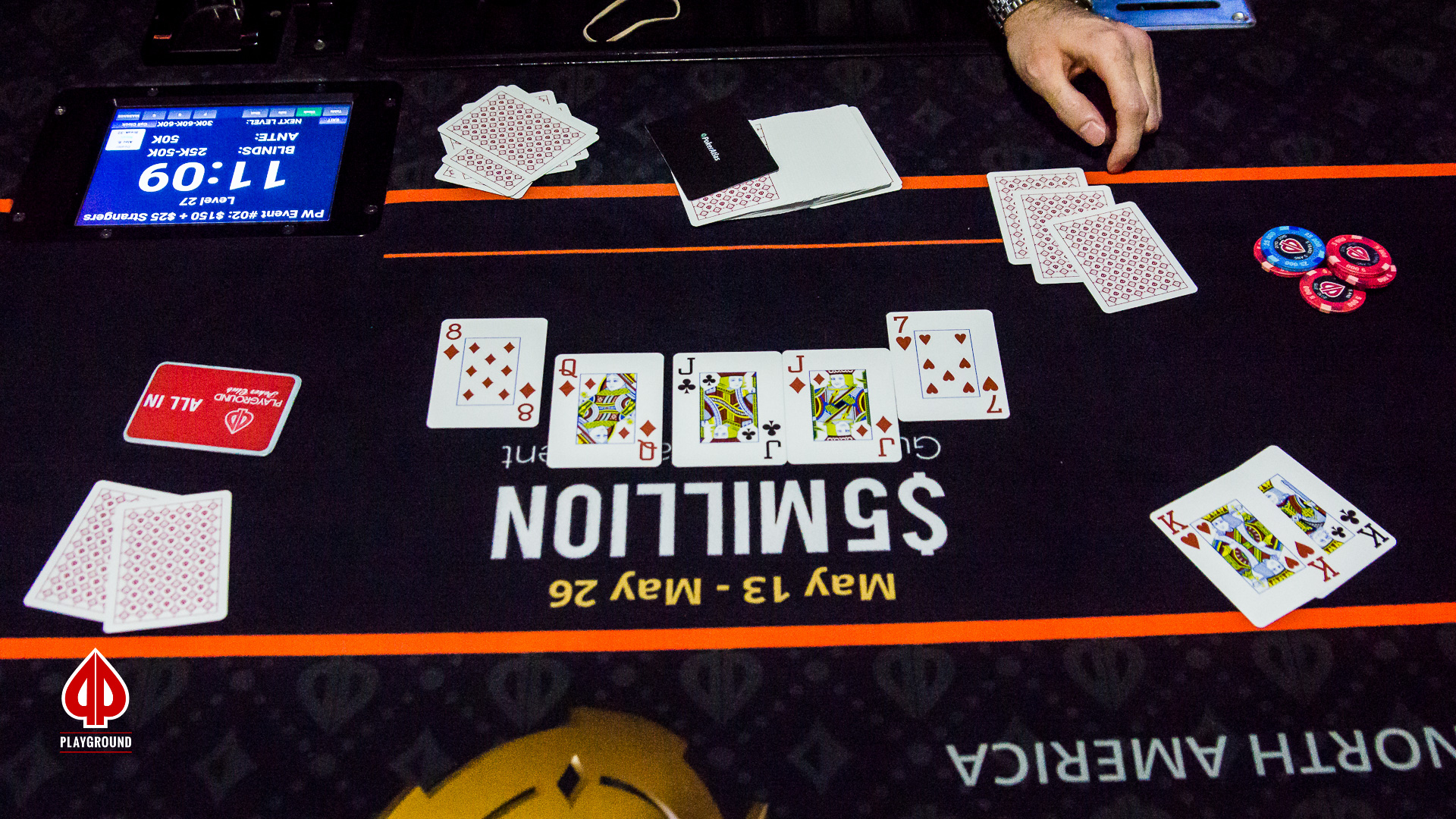 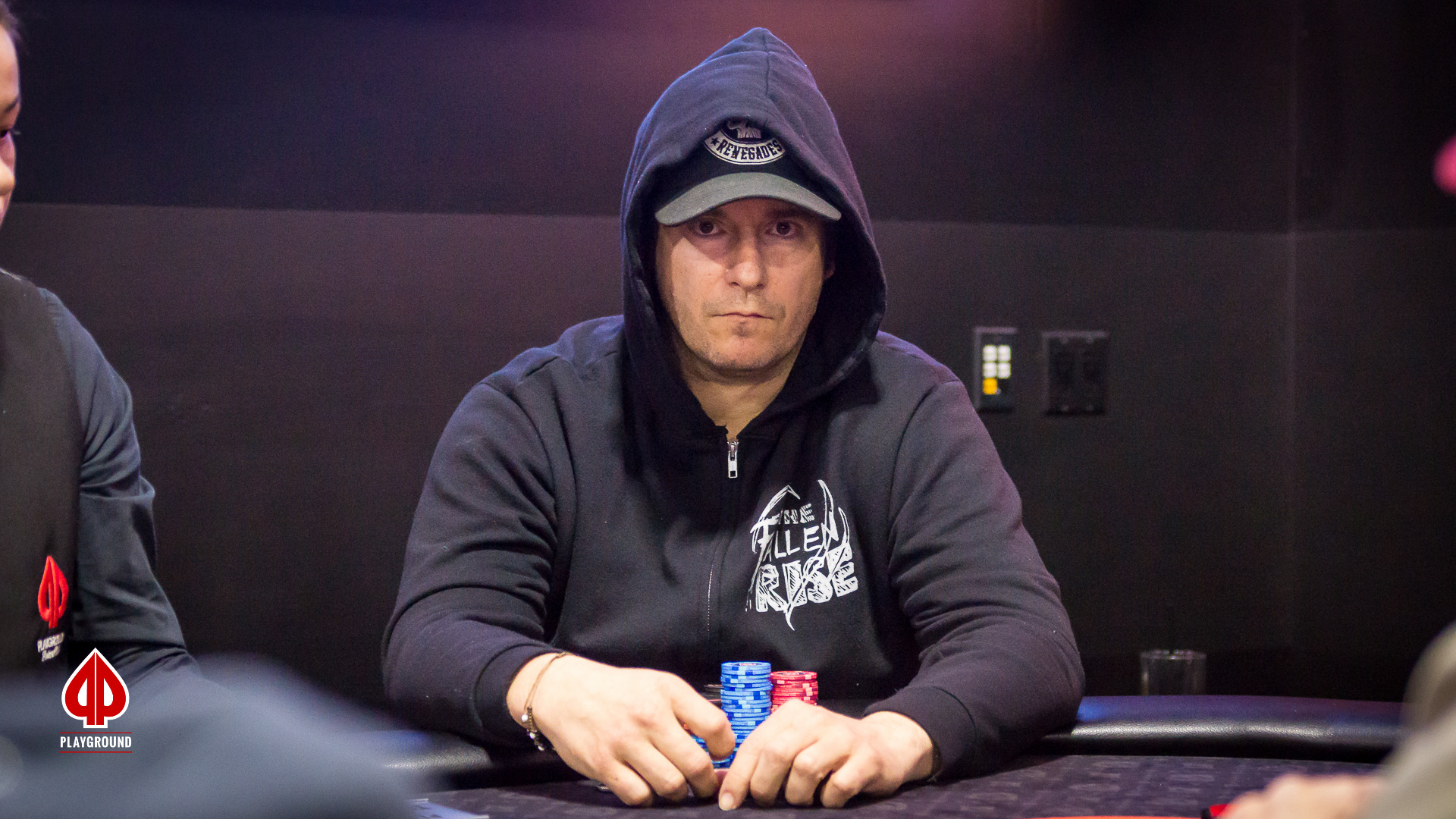 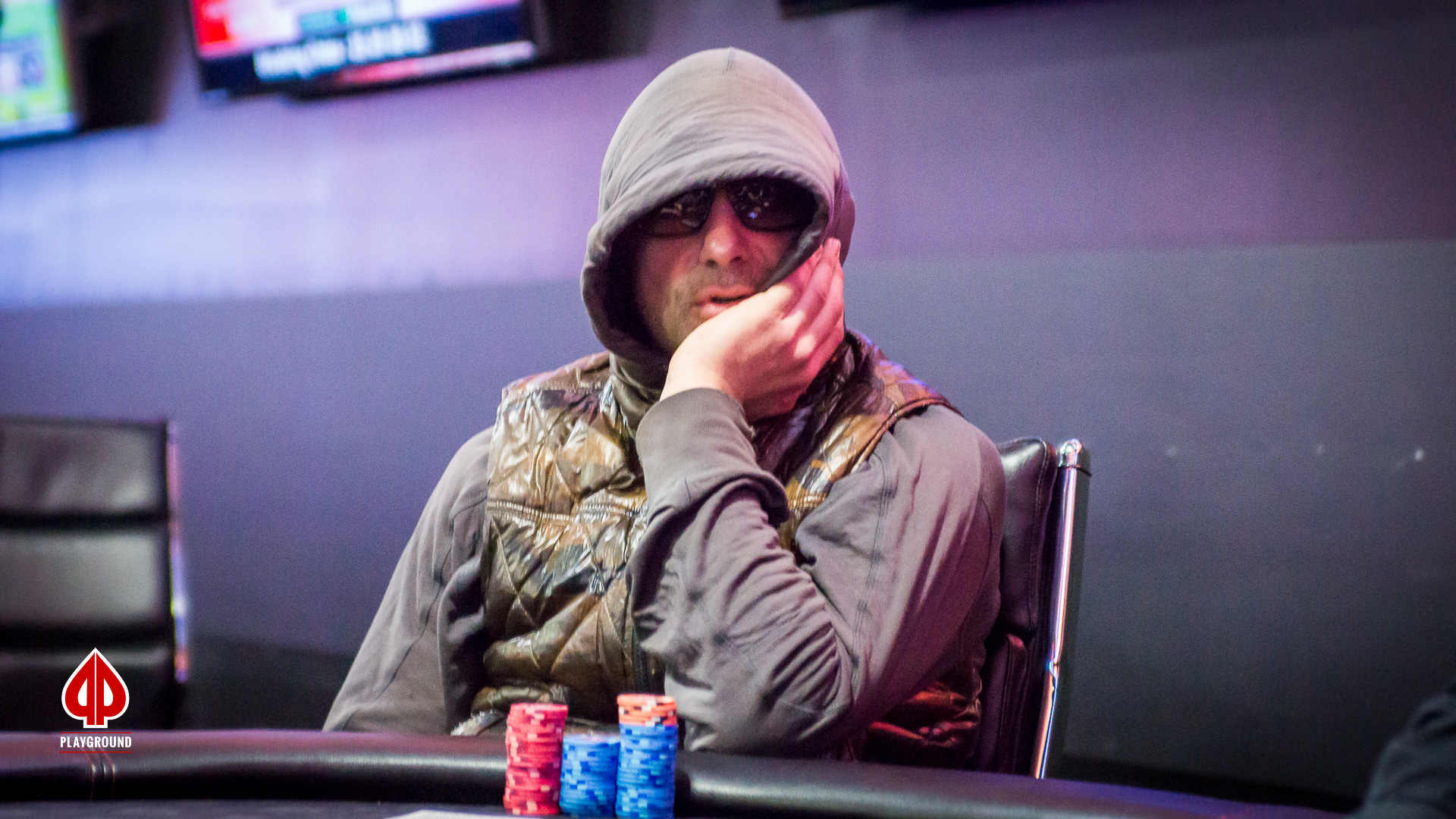 Here are the chip counts of the final 5:

The players arrived looking determined for Day 3 of the Strangers in the Night. Unsurprisingly, they took a very cautious approach out of the gate, with very little action in the first few orbits. The stacks are relatively deep, as the chip average provides nearly 30 big blinds, and there is a lot at stake with an $11,285 prize up top so expect everyone to keep up their focus throughout this final table.

The marquee event of the May Power Weekend, the Strangers in the Night, will crown its champion this afternoon. It took three starting flights and 24 levels of play to get to this point, as the 370 entries in this event have been reduced to the eight finalists. There were 76 players who returned for Day 2, and after ten hard-fought levels of play, only eight remained in contention.

When play resumes, all eyes will be chip leader Mohammadamin Khalilian. After maintaining a healthy stack throughout most of this event, he found another gear in the late stages of Day 2 and now finds himself with a chip lead of over a million over his next closest rival.

Day 2 of the May Power Weekend edition of the Strangers in the Night started with the 76 players that emerged from the 370 Day 1 entries in this event. At the outset, Robert Gariepy led the field with a healthy chip lead over his rivals, one that he was able to parlay into an impressive stack at the final table. But by the end of the flight, a new chip leader emerged. Mohammadamin Khalilian had brought forward a healthy stack from his Day 1 flight and managed to stay above the chip average throughout Day 2, and he finished the flight in impressive fashion by running up his stack to dizzying heights.

Day 3 gets underway tomorrow at 1pm.

Here are the chip counts for the eight remaining players:

The Strangers in the Night is down to the last twelve players, as play continues on the two final tables. Since the last break, Mohammadamin Khalilian has kept his foot on the gas pedal to push his stack to new heights, as he now holds a dominant chip lead over the field.

But there is still time for everything to change as the players head down the home stretch on Day 2. They will play two more levels before bagging chips for tomorrow’s Day 3.