The day started at 4:00pm with 66 entries generating a prize pool of $6,402, with the top 9 players being paid. When the final table was finally formed, the players decided to make a bubble deal so that all 10 finalists would get paid, with the 10th place finisher receiving $110, which essentially paid back the buy-in. Play was mainly passive, with no explosions taking place.  One by one each player was sent to the rail and to the cage to collect their payout.

At 3-handed play, the players asked to have the clock stopped so that they could discuss making a possible deal. The tournament director crunched the numbers and returned to the table to let the 3 players know what the ICM chip chop payouts would be, keeping in mind that 2% of the prize pool had to be left for the eventual winner, and that the tournament must play down to a winner. After giving it some thought, the 3 players decided to continue playing without any deal. Melanie Frisoli was the short stack of the three and eventually exited in 3rd place, collecting $970.

When the heads up action started, Ziva Zagury had a massive chip lead over Lori Sanderson. Ziva asked Lori if she wanted to make a deal, and Lori replied “it’s up to you, since you have most of the chips, why don’t you make a suggestion as to how to make the deal”.  In the end, the 2 players couldn’t figure out what would make sense, and, they decided to just play it out.

Although it seemed like it should be a “slam-dunk” for Ziva to win the tournament since she had most of the chips, every time there was an all-in, Lori came out ahead. The play was mostly passive between the 2 players, with most hands being limped pre-flop and only light action post flop, and it ended up being a long lasting affair, taking the better part of 45 minutes to come to a conclusion. Ziva was tired and was hoping that it would end, but Lori just wouldn’t go away and she kept chipping up.

Finally, Ziva decided to start shoving some hands pre-flop, and Lori kept calling, and, winning. On the final hand of play, Ziva picked up a premium hand and shoved. Lori looked at her cards and called instantly.

The hands were tabled.
Ziva:

Lori’s pocket pair held and after the dealer did the counts, Lori had Ziva covered by just a few chips, and just like that, the Ladies Event champion was crowned. 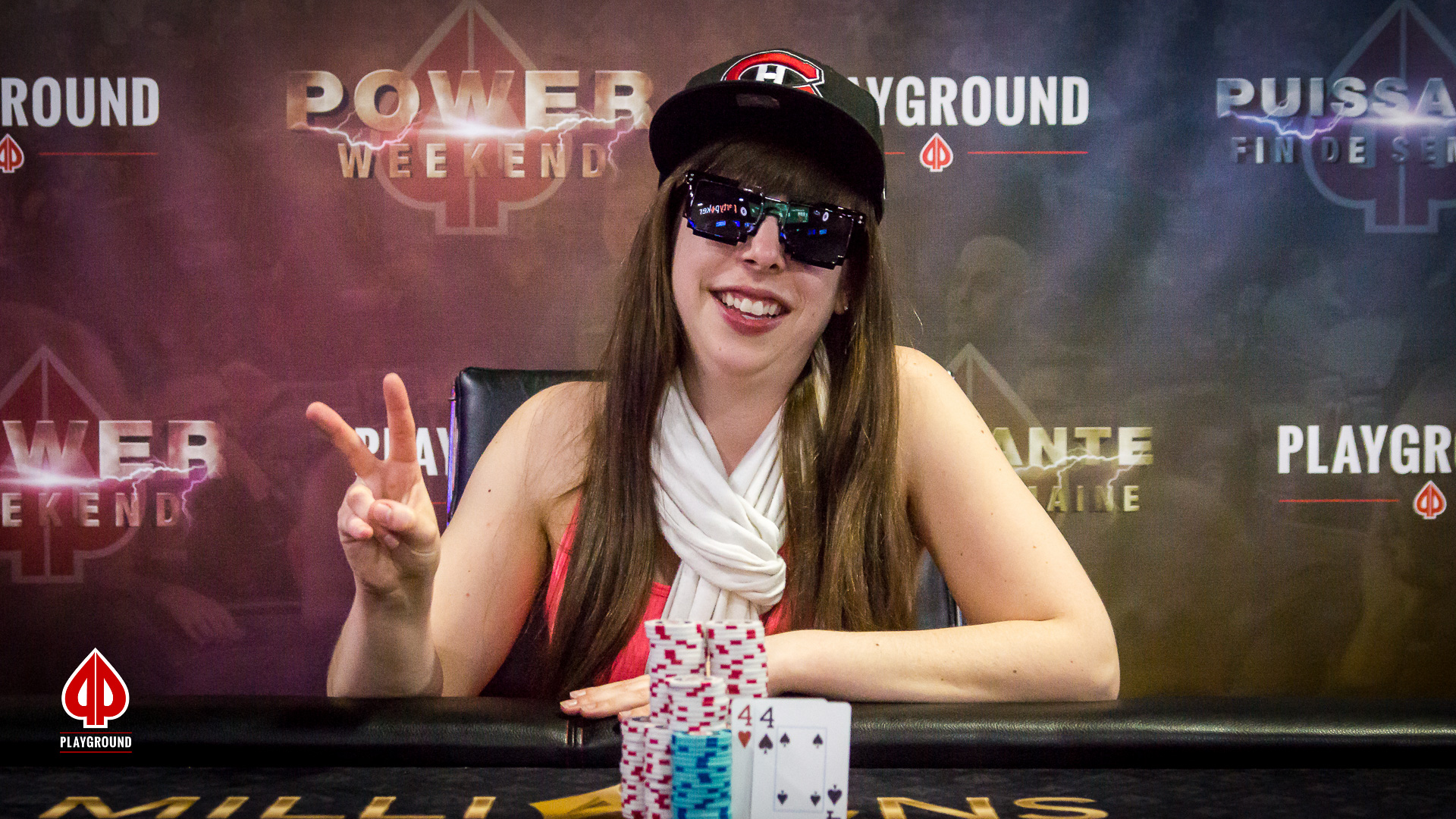 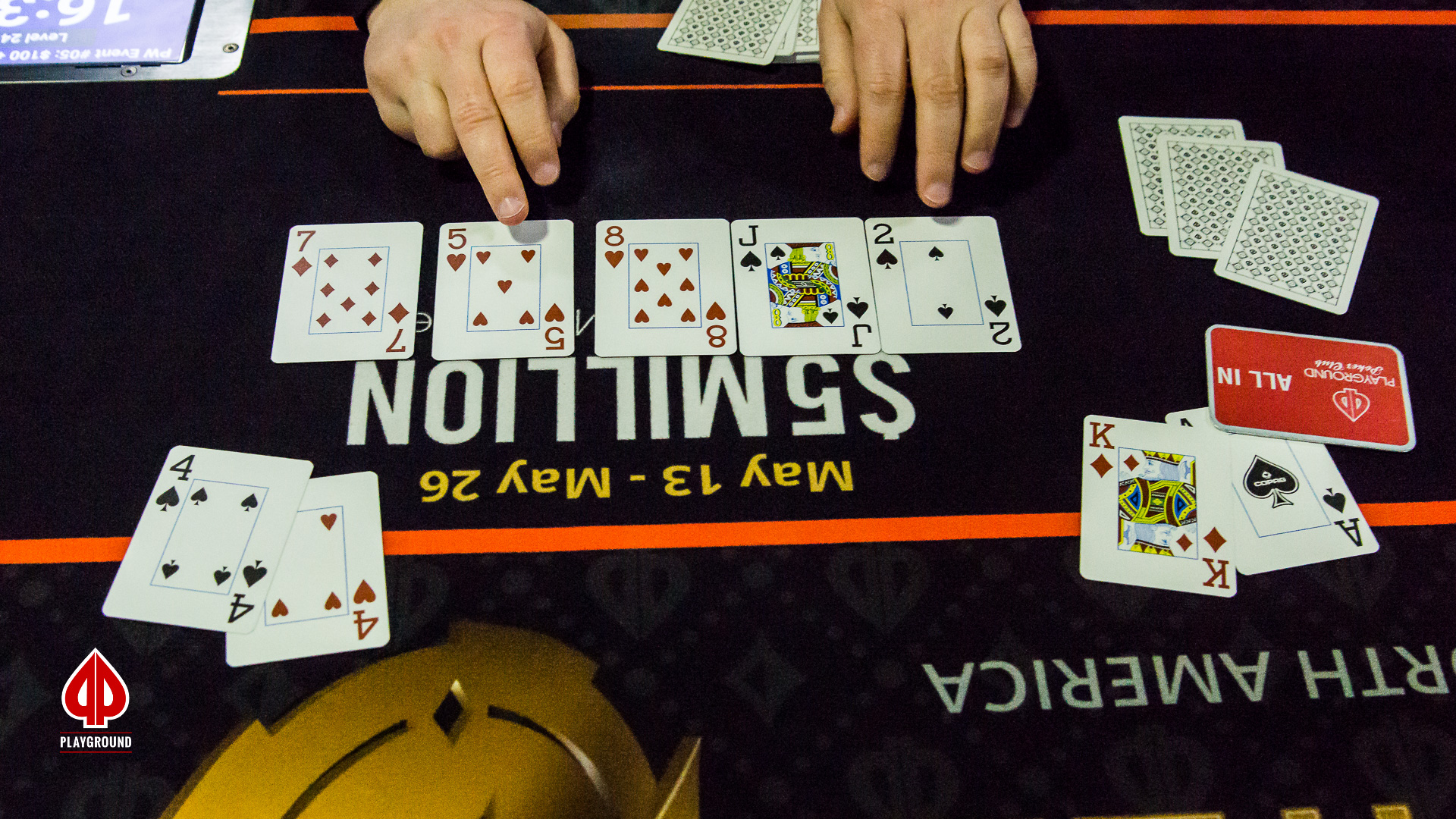 The final of hand of play

Over the last hour and a half the players have been sending chips back and forth and they have been having fun while at the same time playing some serious poker.

Although it has been a fun afternoon, make no doubts, these ladies were here to play poker.  One by one they were sent to the rail and the tournament is now heads up between Ziva Zagury, who has a massive lead, and Lori Sanderson, who is a fighting grinder and refusing to give up.

The Women’s event has just reached the final table.

Although the payout structure was slated to pay the top nine finishers, the ten finalists quickly negotiated a deal that would see some money removed from the top two positions in order to award the tenth place finisher a payout as well. So everyone at the final table is in the money!

The Women’s event has kept up the high energy and contagious laughter seen in the early levels all the way to the latest break. Although there are only 15 players left in contention-six away from the bubble-there are no signs of the tension normally associated with the late stages of a tournament; everyone is still having a great time.

This edition of the Women’s event easily surpassed the $4,000 prize pool guarantee with $6,402 up for grabs thanks to the great turnout. The top nine finishers will reach the money that will be paid out according to the following table:

The players in the Women’s event have just returned to their seats following the latest break in the action. The field is down to 35 players on four tables and several players have found ways to bring their stacks into six-figure territory, but Roberta Biancardi leads them all with a stack approaching triple the chip average.

Play has just resumed following the first break in the action in the Women’s event. The field grew to 66 entries before the timer sounded to indicate the end of the late registration and re-entry period.

There are now 57 players remaining, and they are clearly having the most fun in the tournament hall. The mood in the early levels has been light and friendly, with laughter punctuating almost every hand.

Several players managed to more than double their starting stacks since the start of play, but they all trail the current chip leader, Julie Payette.

The Women’s event is proving to be more popular than ever. With a great turnout to start things off this afternoon, this event already surpassed its prize pool guarantee after less than 30 minutes of play. There are now 53 entries (including one re-entry) and counting, with more than an hour left in the late registration and re-entry period, expect many more to follow.

Here’s a look at some of the players from the first level of play:

The May Power Weekend is in full swing this afternoon, as Event #5, the Women’s Event, is set to begin.

This event features starting stacks of 25,000 in chips, 20-minute levels, and, most importantly, women only! Late registration will be available until the beginning of the seventh level of play, with unlimited re-entries permitted during that time so players can have multiple chances at getting a part of the $4,000 guaranteed prize pool.