Event #4 was a traditional 1-day freezeout turbo tournament. 131 players showed up for the afternoon-long event, all vying for the lion’s share of the $8,000 guaranteed prize pool. When the numbers were crunched, almost $13,000 in prize money were accumulated, and split among the top 17 players.

The competition sped up noticeably when the last 2 tables were formed. Chips were flying, and soon there were only 3 players left: Christian Rho, Steven Taylor, and Jonathon Mclean. Rho took out Taylor and as a result, enjoyed a 3 to 1 advantage at the start of the duel. Mclean, however, pulled a rabbit out of his hat and hit a 3-outer after committing pre-flop with a dominated hand.

He kept accumulating chips until he showed a decent lead. At that point, he increased the pressure, and was finally in a position to call any all-in with the majority of hands. Indeed, Rho’s big slick was taken down by 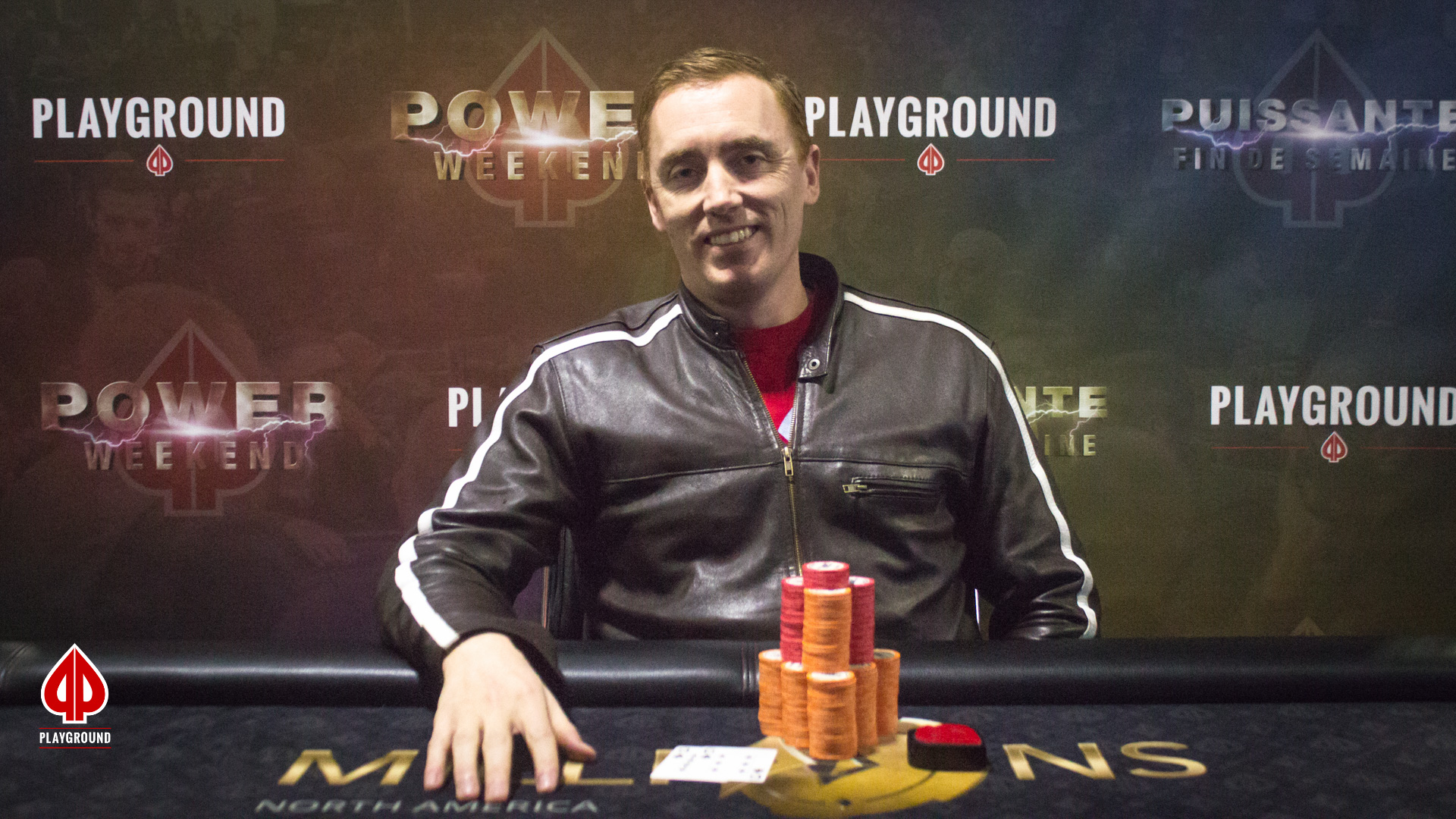 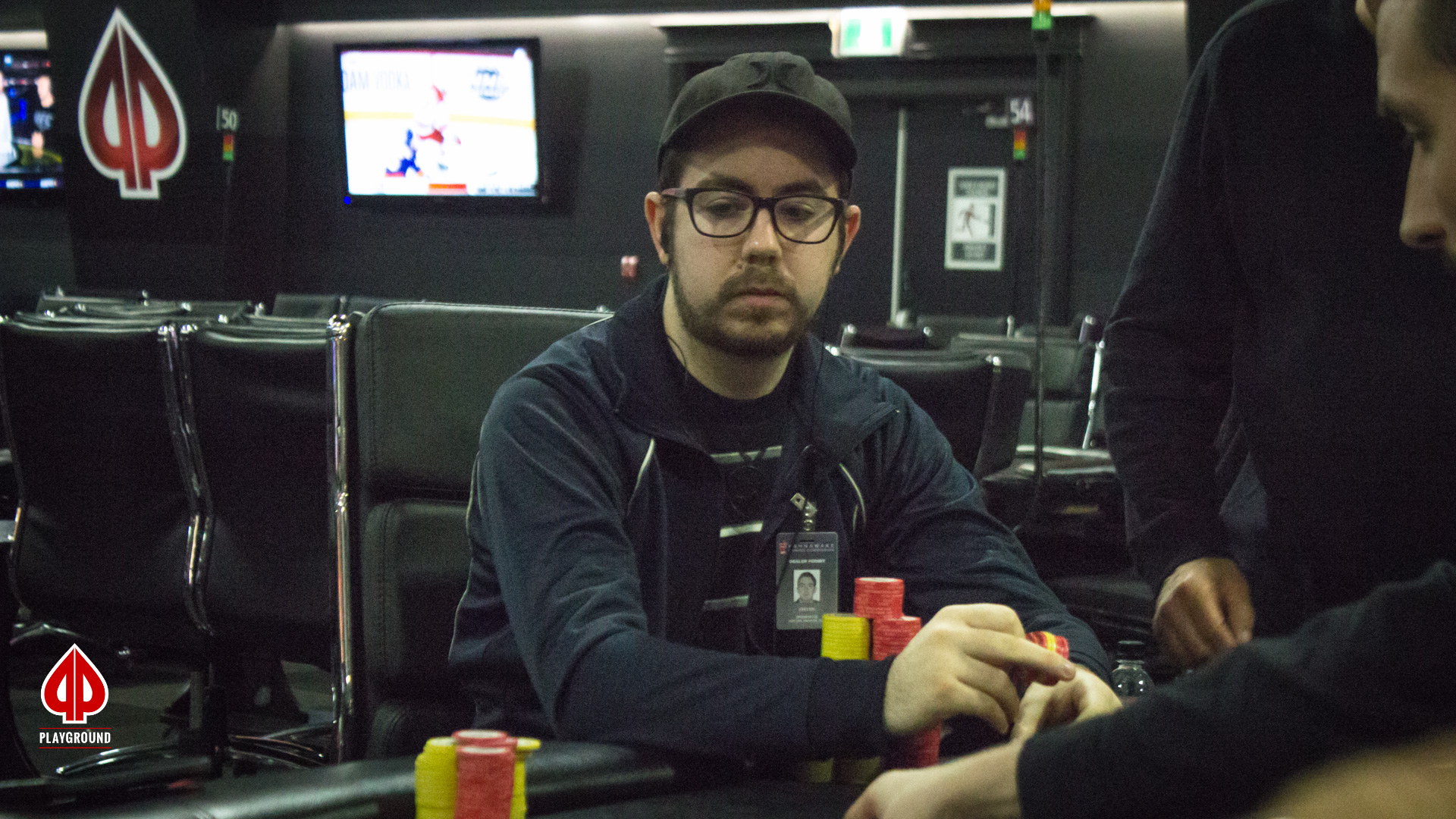 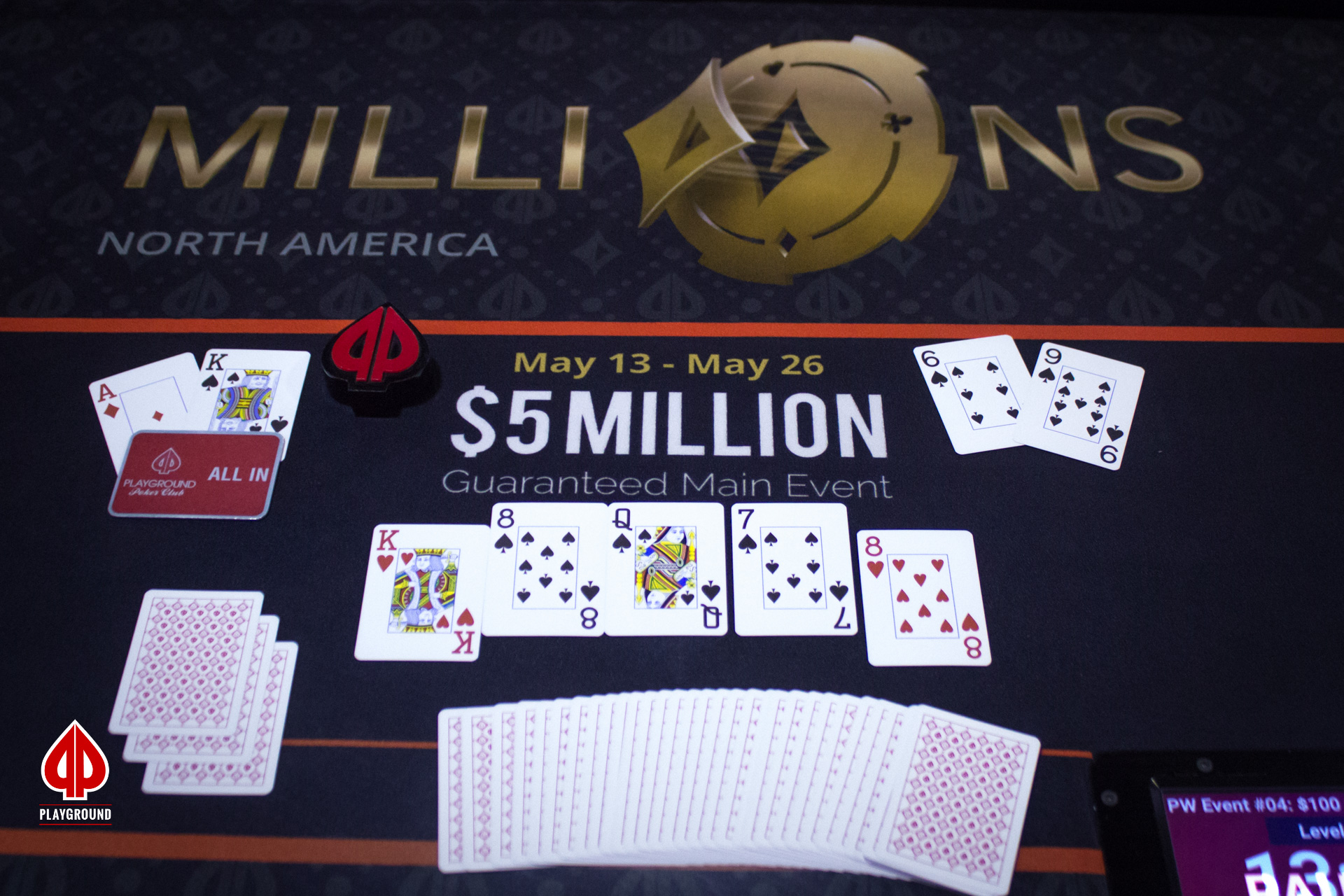 When Christian Rho eliminated Steven Taylor in 3rd place, he was enjoying a good lead over Jonathon Mclean, but only to see him catch up in leaps. Mclean finally passed him and the roles were reversed, but Rho doubled up again to about 1.8M. Mclean has about 2.4M.

Michel Champagne was left with about 150K, facing 3 huge stacks. His all-in was called by Steven Taylor, holding rags but working with a monster stack.

Now look at this flop:

Champagne left with $950, leaving Christian Rho, Steven Taylor and Jonathon Mclean. Each of them have now secured a 4-figure prize. 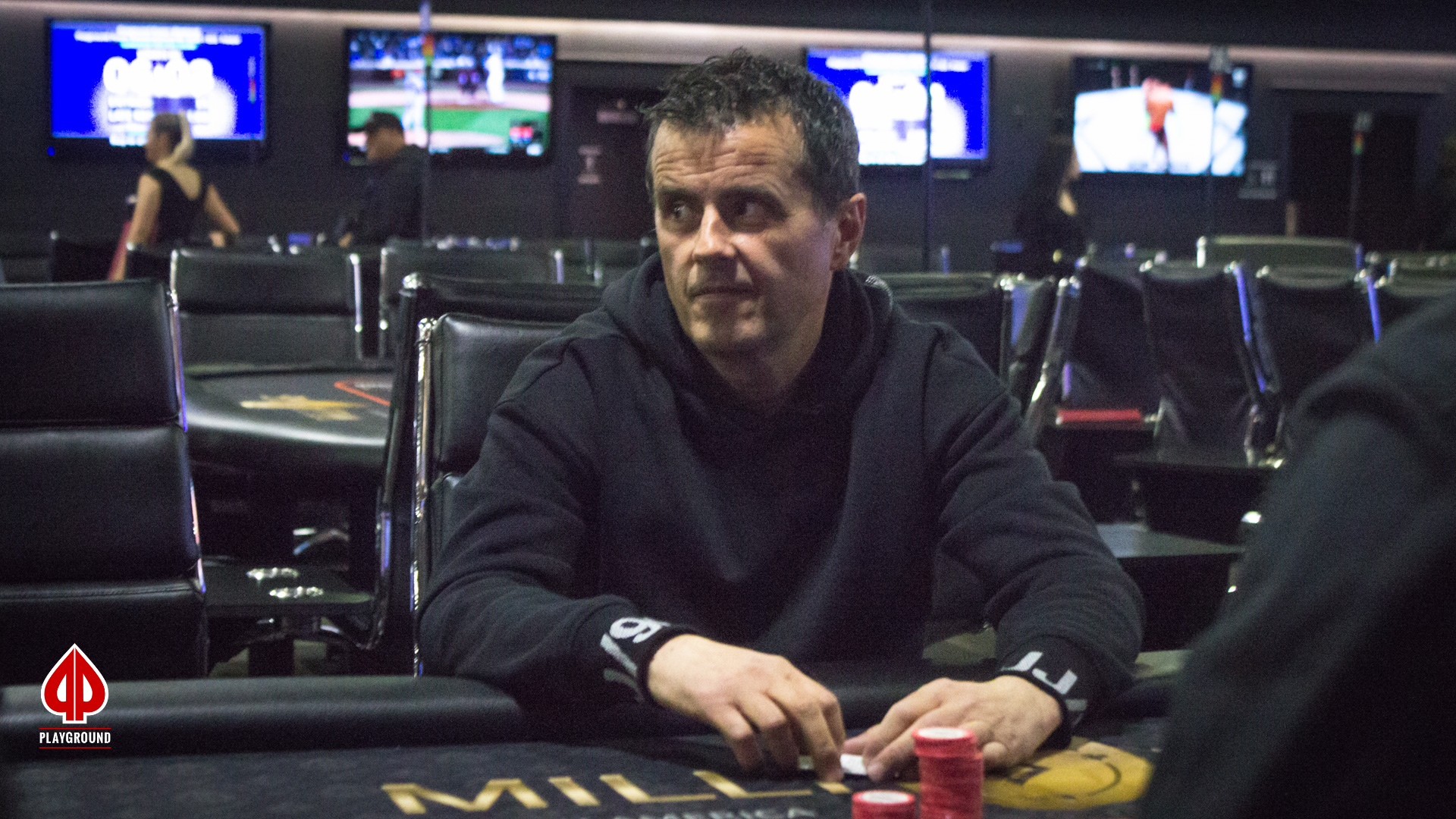 After 11 minutes of play on the final table, our 6 finalists were able to take a well-deserved break. The table tilts massively on one side, as most of the chips are hogged by seats 1, 2 and 3:

Players in Event #4 are not holding back; all-in cards are flying! As soon as we hit the money at 17 players, short stacks were more than happy to throw the dice. Eliminations were quick, but we caught the hand that formed the final table.

Ian Armorer went all-in without about 200K, and Jonathon Mclean called, covering him easily. Lisette Martel was the shortest of the 3, and also called.

Mclean was looking extremely at showdown, as his opponents were stealing each other’s outs. The board came super clean, and the director announced the formation of the final table. Here’s a look at our finalists:

Thanks to the biggest pot of the day, Lizotte managed to steal the driver’s seat from Arbuckle. The latetr opened to 18,500 chips, and after Christian Rho called, Christian Lizotte went all-in for 170,500. Arbuckle asked for a count, and thought for a while, as both of the other tables were going on break. A few players got closer, attracted by the potential size of the pot. Call!

Lizotte is now well in the lead, as the following table can testify:

We came across a hand that had 3 players on the river. Genia Frenkel was first to act and opened rather small considering the substantial size of the pot. Her 19.5K bet was met by Jonathon Mclean’s raise to 45K, which was screaming “Call me!” even louder. Frenkel heard it, but after player 3 threw his cards, she couldn’t bring herself to fold such a beauty:

The river lifts all boats! Here a photo of Frenkel and Mcneil, taken shortly after the chips were attributed: 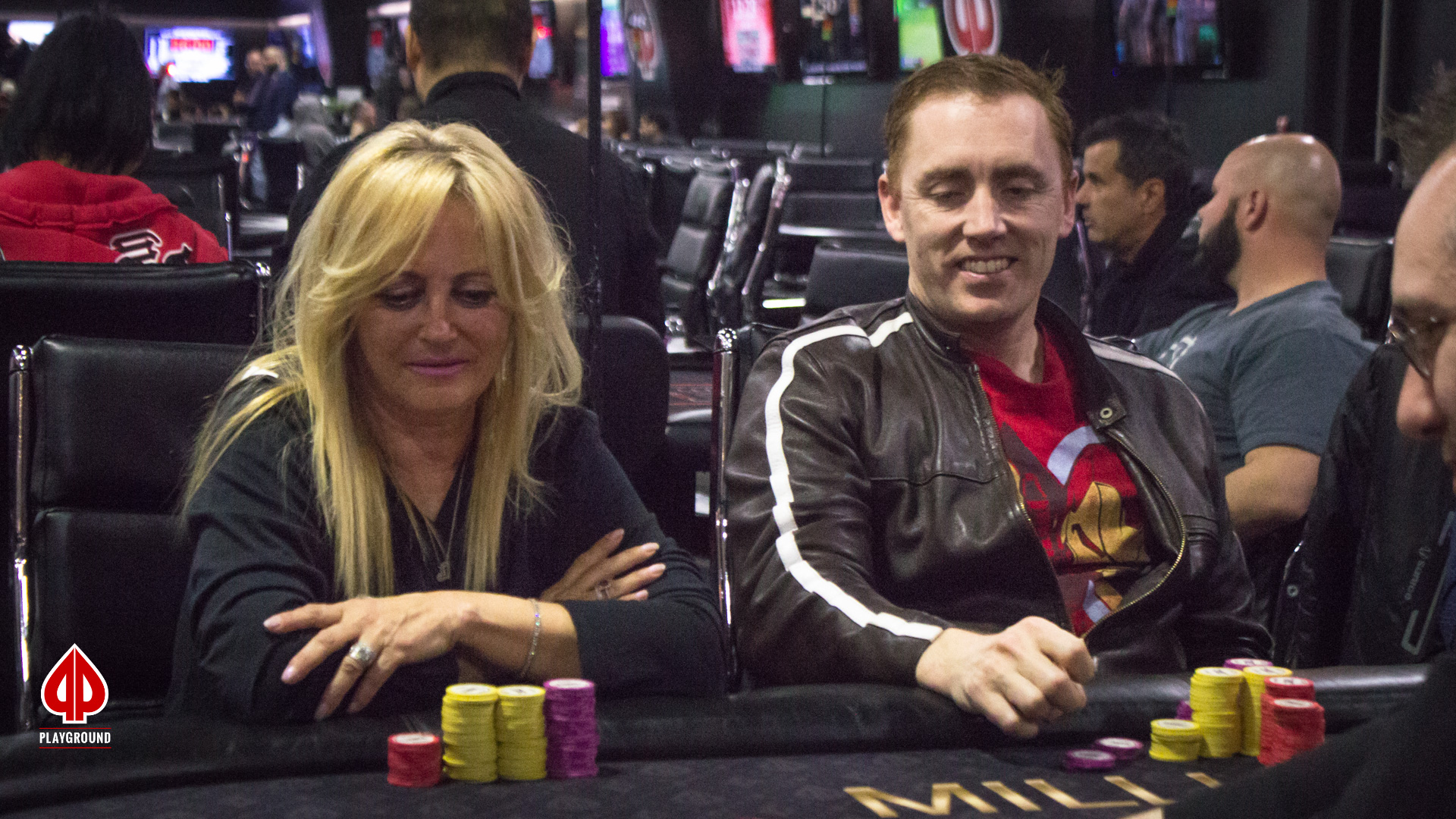 Cody Arbuckle has grabbed the driver’s seat. Of course, the turbo nature of the event doesn’t allow anyone to rest on their laurels, but it is always nice to have a lot of bullets for the final act! Here’s a look at the top of the leaderboard:

Event #4 is down to just 66 players. Tables are shrinking at an exponential rate and some players are accumulating fortunes. The upcoming break will reveal who got the best out of the 2nd stint. For now, here are the prizes that await our deep runners:

After 6 levels of play and a break, 22 eliminations have taken place, leaving 109 players in the field. 131 entries have been accounted for, and the tournament staff is currently crunching the numbers and will publish the payouts soon.

Jonathon Mclean is leading the event from the farthest table, working with a very comfortable 123K stack. The current top 5 is listed below:

Donald O’Connor was the second limper in a hand that he chose not to raise from a middle position. When Frédéric Brisebois, sitting 3 seats to his left, opted to go all-in, O’Connor was eagerly waiting for the action to come back to him. He called! 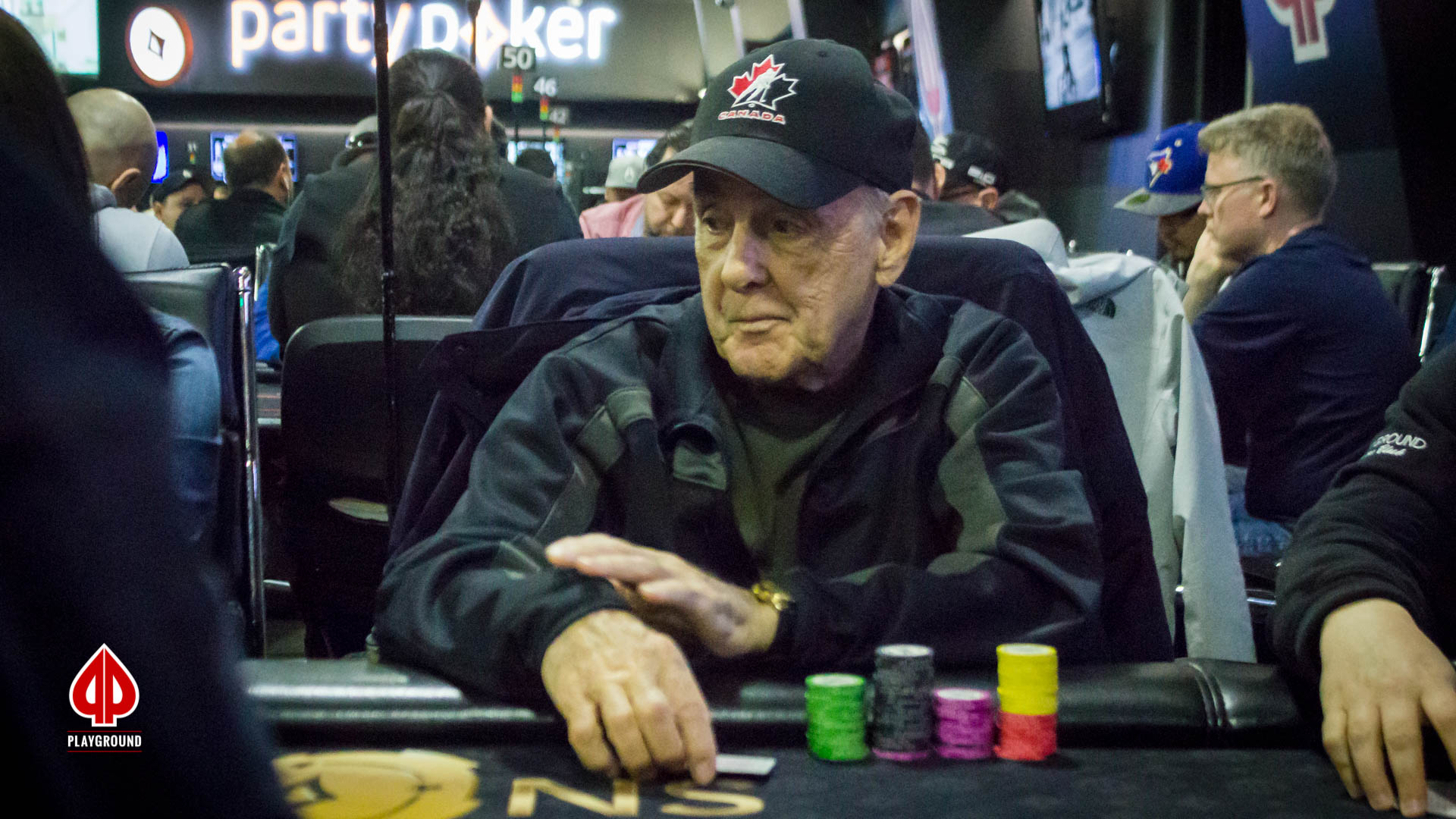 Level 3 is winding down as players keep coming in for some Saturday afternoon freezeout action. We are passing the 100-entry mark, meaning the $8,000 guarantee has already been crushed. There is about an hour left to the late registration period, which means the prize pool will keep growing with every buy-in. Here is an early round of photographs: