With 27 places paid and 28 players left, the tournament entered the “hand per hand” format. All it took was a single hand. Two tables went to showdown. No one got eliminated at table #33, but it was a different story on table #34.

Pascal Baumgartner, his stack protected by his toy figurine, was all-in preflop, Marc Saddik his only caller.

The flop was out:

and the dealer was waiting for the ok from the tournament director to have both players open their hands.
After a few seconds, the hand unfolded.
Pascal:

Pascal, ever the optimistic, said, “hey, no problem, all I need is a king… or a nine!”, smiling at the dealer. The

on the turn didn’t change much, and then the hammer hit the nail on the head with the river:

giving trips to Marc although he didn’t need it.

So Pascal Baumgartner is the bubble, and the remaining 27 players are in the money. Paul said he was not going home empty-handed. He obviously had been enjoying himself, and informed the whole table that he had four bounties in his pockets.

Bubble: Paul Baumgartner, proudly showing how many bounties he had gathered. 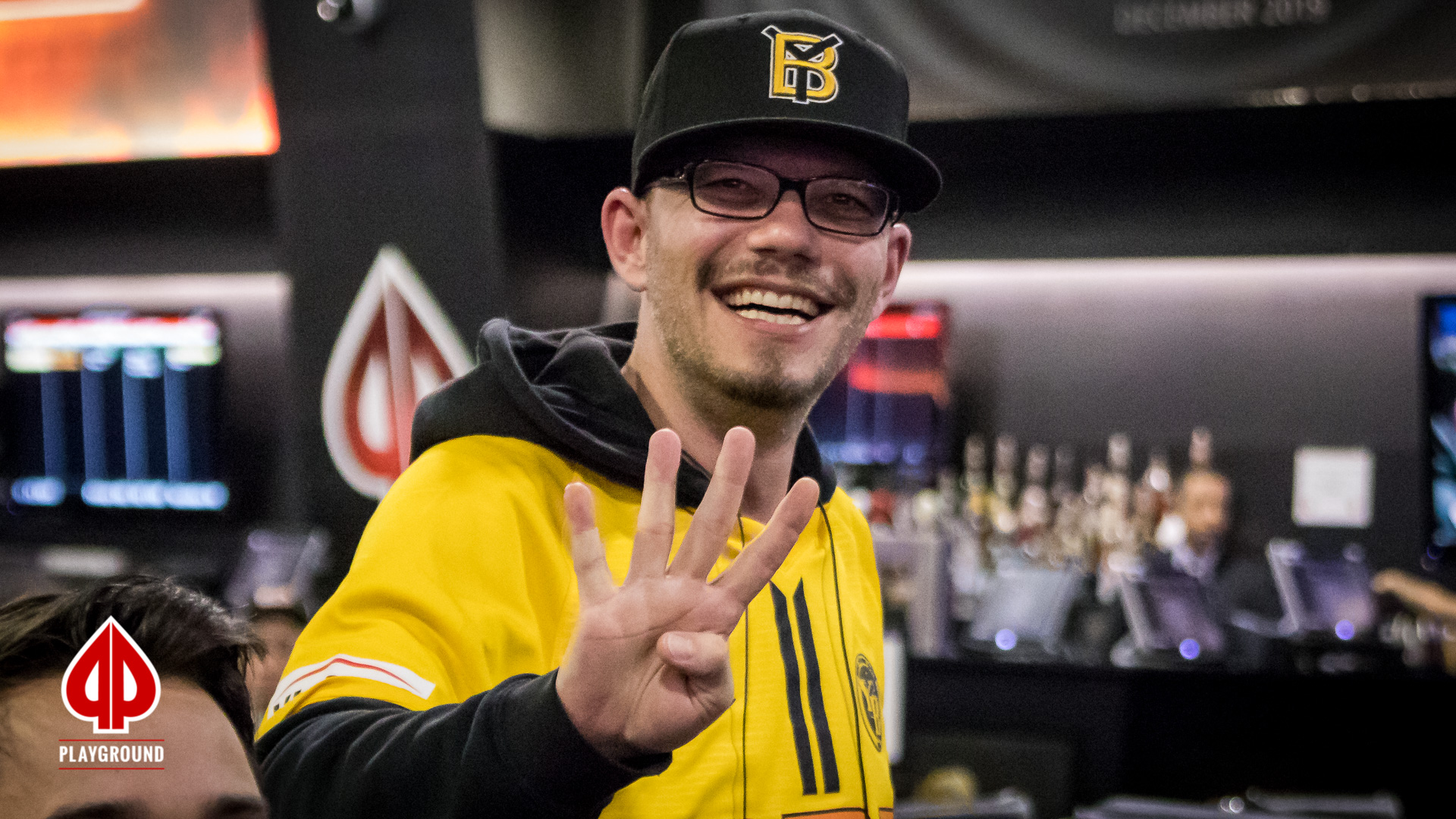 The players took a short break, which allowed us to survey the field for stacks. Jean-Philippe Binet is the current chip leader with 292,500 chips. Peter Liakopoulos, James Cooke and Marc Lavergne are right behind, and the only other players above 200K.

With only four tables left, the players are settling back into their seats, hoping to get their hands on more bounty chips.

The clock has been paused to reset the tables for 9-handed play, as well as to introduce the shot clocks. 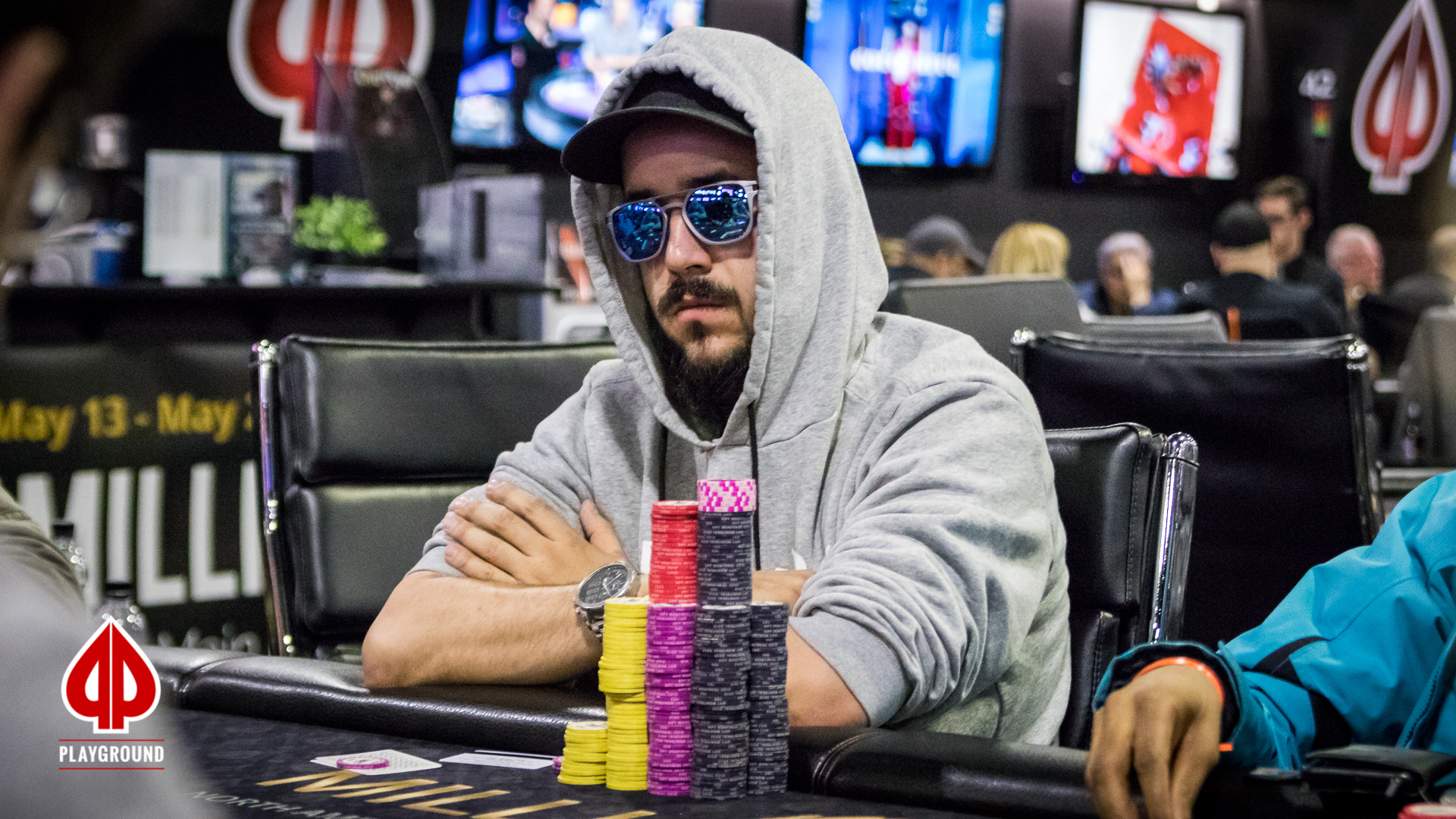 The field is shrinking quickly. There are now only 49 players left and the action is not letting up at all. All-in’s are being heard on every other table as the players try to snag as many bounty chips as possible.

Here are some photos of the players, from level 15.

Some 84 players are still in the field and the action is still on full throttle, as is often the case in a bounty tournament. Loud cheers erupt in the hall every time the Raptors score, and everyone seems in good cheer.

We went around the room to capture some photos of the players from levels 10 and 11.

The prize pool has been released, and it has exceeded the $40,000 guarantee. In total, the top 27 places will be paid according to the following table.

The players are coming back from the break and the action is resuming at level 8.

During the break, we went around the field to find out where the chips lay. Antoine Simon is off to a great start, with a stack of 86,075 chips. David Brillon is in second place with 76,400.

It is still very early and it is anybody’s game. The registration period is closed and there are a total of 214 entries, with 164 players still in. 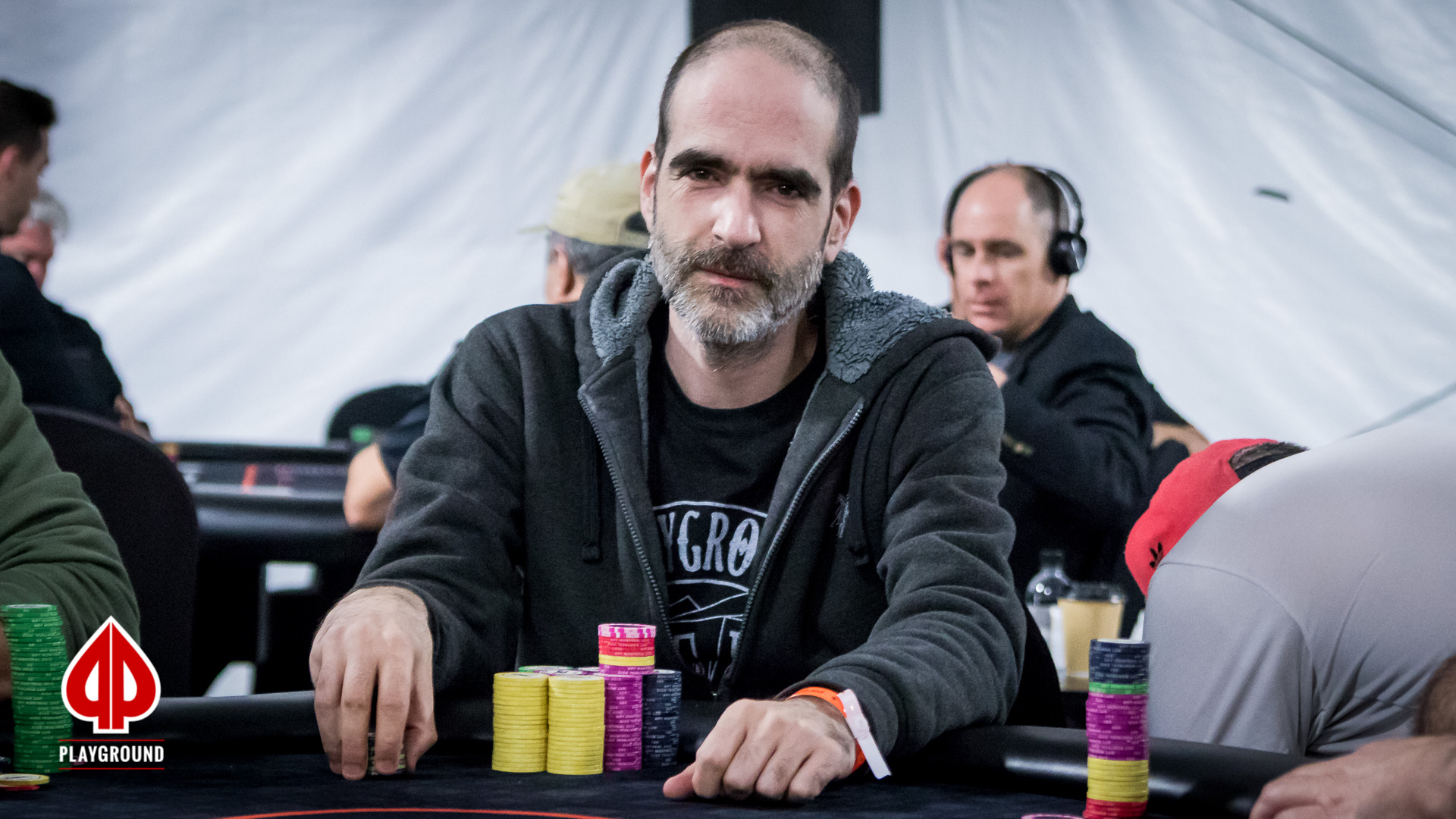 Some antics at table #94 attracted our attention, as well as the dealer saying, “all-in, call, call, call”. The action was pre-flop and involved Anderson F., Raphaël Ohayon, Krzystof Birecki, and Steven Brenie-Sinclair. The players were turning over their hole cards when we arrived at the table.

Anderson, a regular player at Playground, known for his antics at the tables, was up and chanting, “I’m ready to gamble!”, obviously pleased to have the only pair in the group. Not to mention the amount of aces, kings and queens already out among the other three opponent’s hands.

The flop came out

on the turn didn’t change much. But then the river hit

; making the sevens to the worst hand out there. Flush for Krzystof, Aces & eights + King kicker for Steven, who picked up the side pot.

The river had Anderson whipping out his cell phone to check the odds of this happening. At the end of the hand, no bounty was exchanged since the winner (Raphaël) had the shortest stack coming into the hand. Anderson, who covered everybody was reduced to 5,000 chips and was seen leaving the tournament hall a few minutes later; obviously knocked out.

The players are taking a short break, and we’ll get a leaderboard up. Late registration will close with the end of the break. 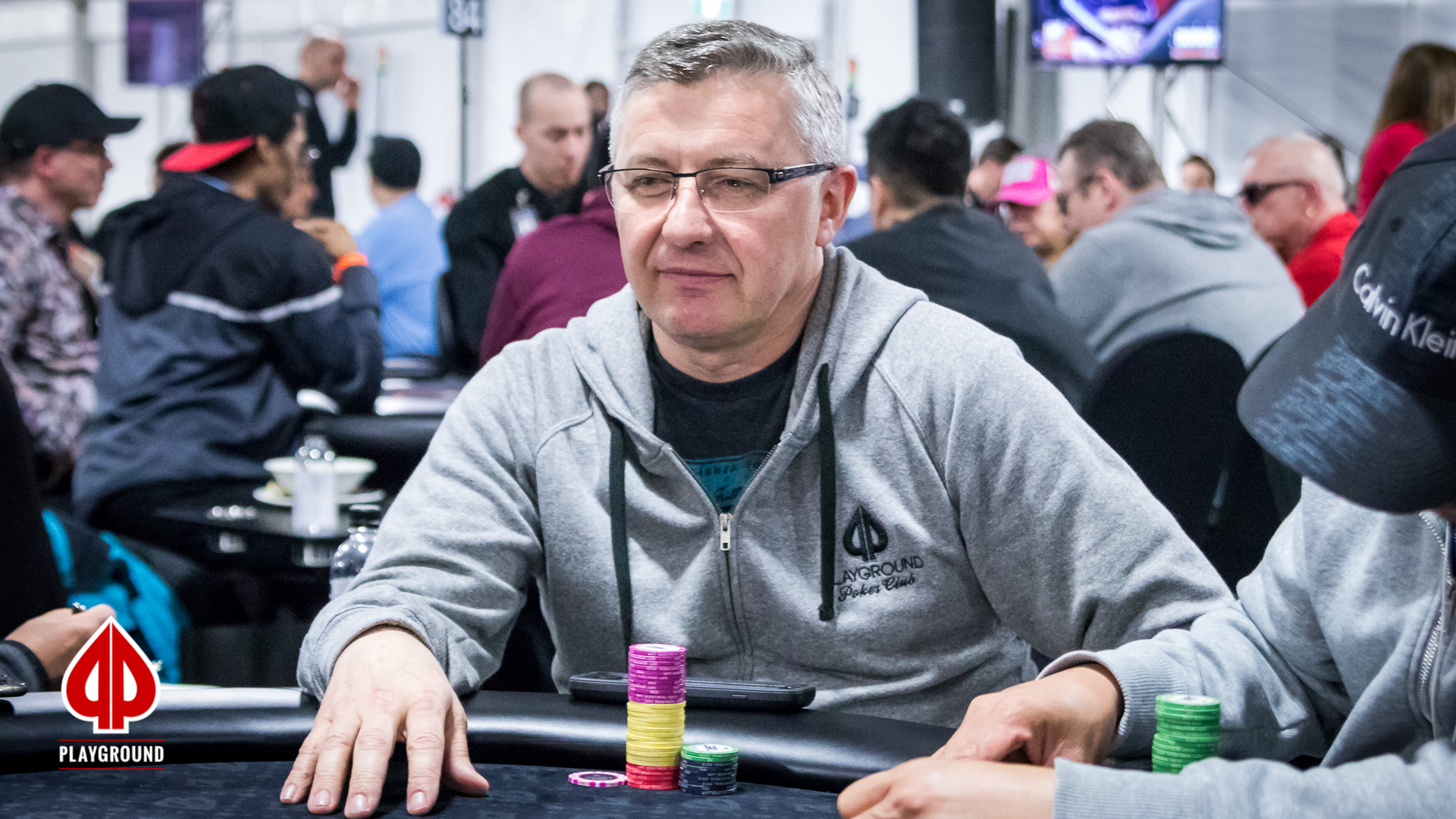 The Bounty tournament is in full swing and the action is intense. The players are obviously in it for the bounties, but also to have a good time. The elimination rate is pretty steady, 20 players are down, more are coming in.

In these shark-infested waters, we decided to shine a light on the beautiful ladies that are presently in the tournament. They look soft and sweet, but watch out, these roses have thorns…

“Dealers, shuffle-up and deal”. As the words echo across the room, the players are settling in for some great poker tonight.

There are some familiar faces and some new ones. At a total cost of $330 dollars, this event is accessible to all poker players. So come down and register to get into the action. Late registration is possible until 9:15pm.

Let the games being!

This is a one day No Limit Hold’em event, boasting a $40,000 guaranteed prize pool. Players start with 20,000 chips and blinds increase every 20 minutes. Every player shall receive one $100 chip for each player they remove form the tournament. A player’s bounty chip also serves as an all-in chip. Play will be 10-handed, and there will be a complete seating redraw when 10 players remain.

This is a freezout tournament and players can register until the beginning of level 7, which should be at 9:15pm.

The dealers and the whole Playground army is ready to get things under way in the spacious tournament tent specially designed for the MILLIONS North America event series. There is also an all-you-can eat buffet set-up for the players, for $20. 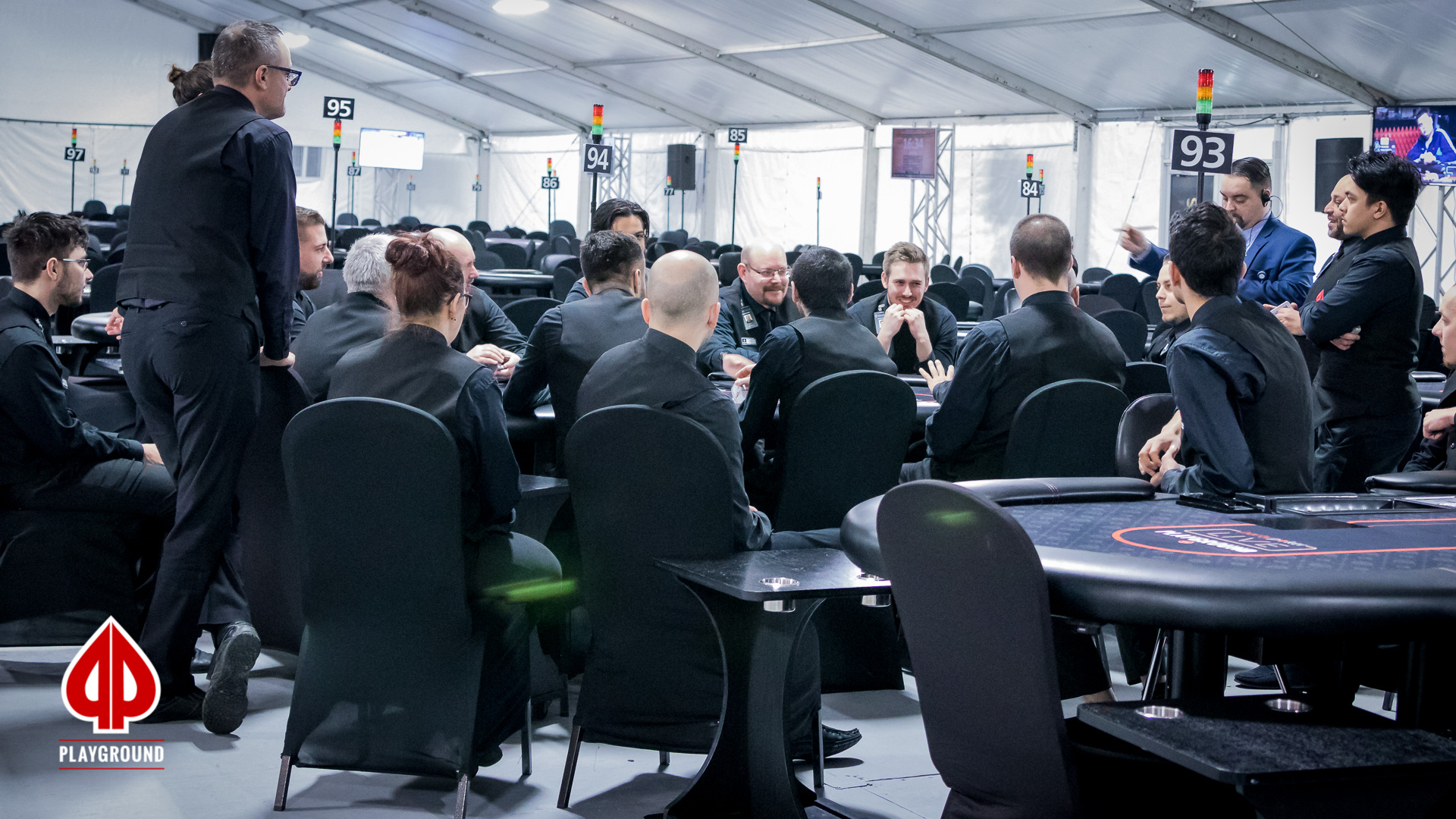