It was a grueling day of poker today.  The action was not always on full throttle, but it was definitely intense.  The tournament started with only 50 or so entries, but within minutes, that number had doubled.  And it doubled again before the end of the late registrations.  No less than 191 entries made their way to the felts, including 33 re-entries.

The action came and went, and at no point was there a clear and massive chip leader.  Early on, Carla Sabini jumped ahead of the pack, but was soon replaced by Lino Agostini, who was barely ahead of the rest of the players.  At this point, the action froze as all the players were quickly realizing that the blinds were eating away at their stacks and they would have to make some bold moves, and soon.

Halfway through the tournament, a lucky hand propelled Ken Ransom to the top of the hill before Yanick Dupuis dethroned him to grab the top slot on the leader board.  No sooner had the bubble burst that the eliminations started happening at a frantic pace.  This lead to a quick and intense reduction of the field.  Before long only two table were left and the pressure on the short stacks continued to climb.

The final table was set and after the elimination of René Gauvin, an ICM chop was agreed on.  That’s where the action got crazy.  One after the other, all the  players fell within minutes of each other.  During that time, Joseph Roberts was on a golden streak of poker, to say the least.  In no time at all, Charles Gravel and Joseph Roberts, behind a monster-stack of epic proportions, found themselves heads up.

It lasted one hand.  Gravel shoved, Roberts, holding about 90-95% of the chips, called, blind.  Now Gravel had a great hand; and this was sure to be the beginning of a good thing:

:Qdh.  Roberts flipped over his hand:

and Gravel was feeling pretty good.  The flop fell in harmony to Roberts winning streak:

.  Roberts flopped a straight and the rest is history.  The

on the river were a formality.  The tournament was over.

So Event #4 has it’s champion: Joseph Roberts.  Congratulations to all the winners!

The action on the final table is at an incredible level.  There is literally a player busted at every other hand.  The back of Linda Rioux (out in 5th) could still be seen from the poker hall when yet 2 more victims fell.  This time it was Patrick Giroux and Yancy Ferris Matteau.  The hand resulted in a 3-way all-in against Joseph Roberts.

The players were jokingly wondering if Roberts good streak would come to a stop eventually.  There was a sliver of hope on the flop:

, Giroux had one pair at least.  The turn changed everything around:

.  Roberts was good with his rockets, but a jack would now award Matteau a straight.  For his part, Giroux was out of options at this point. The river change nothing

and in one swift blow, Roberts sent both players to the rail.

Once again, the hand was over in a flash.

This left Charles Gravel alone to confront Joseph Roberts and his Everest-sized mountain of chips. 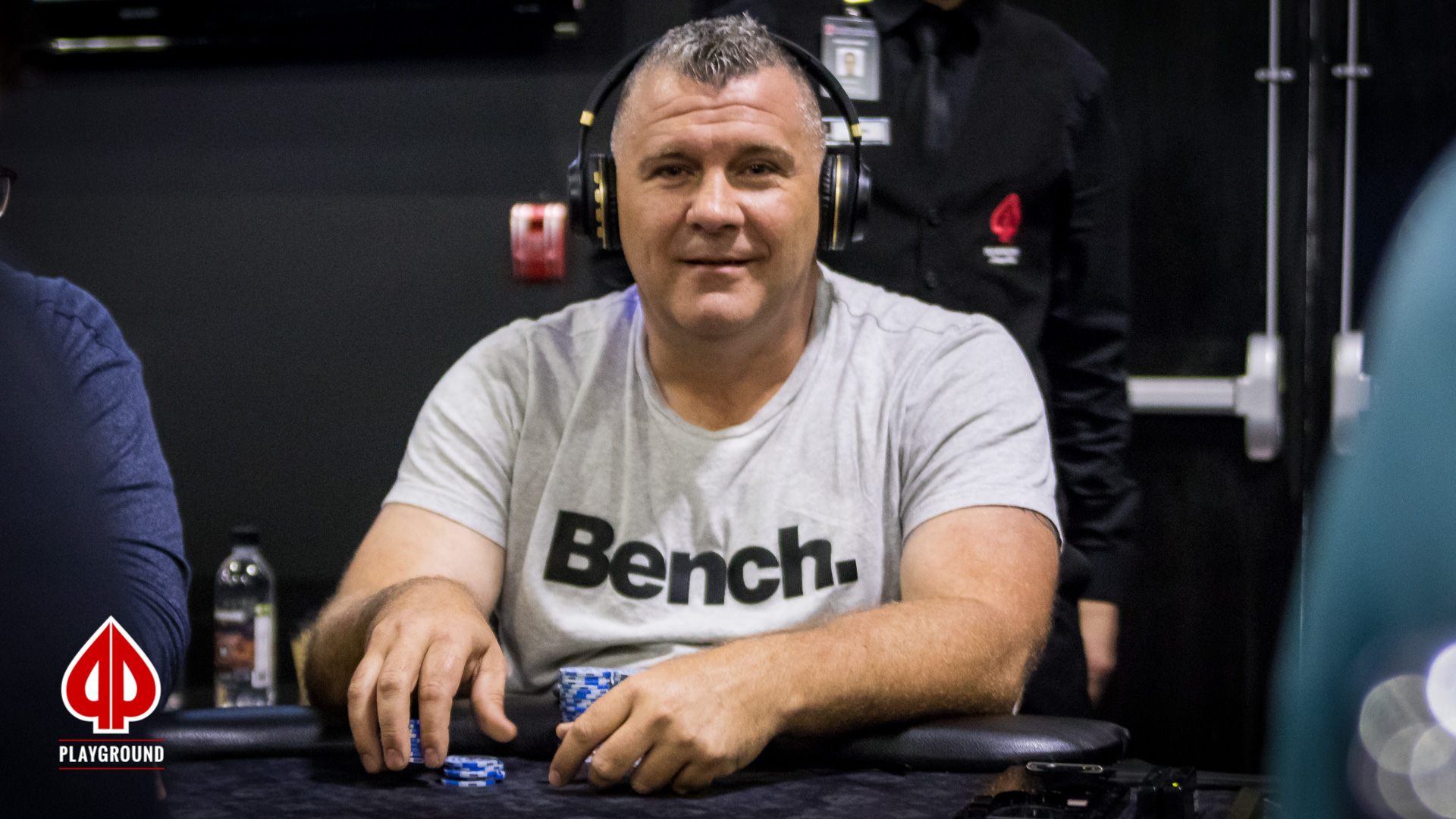 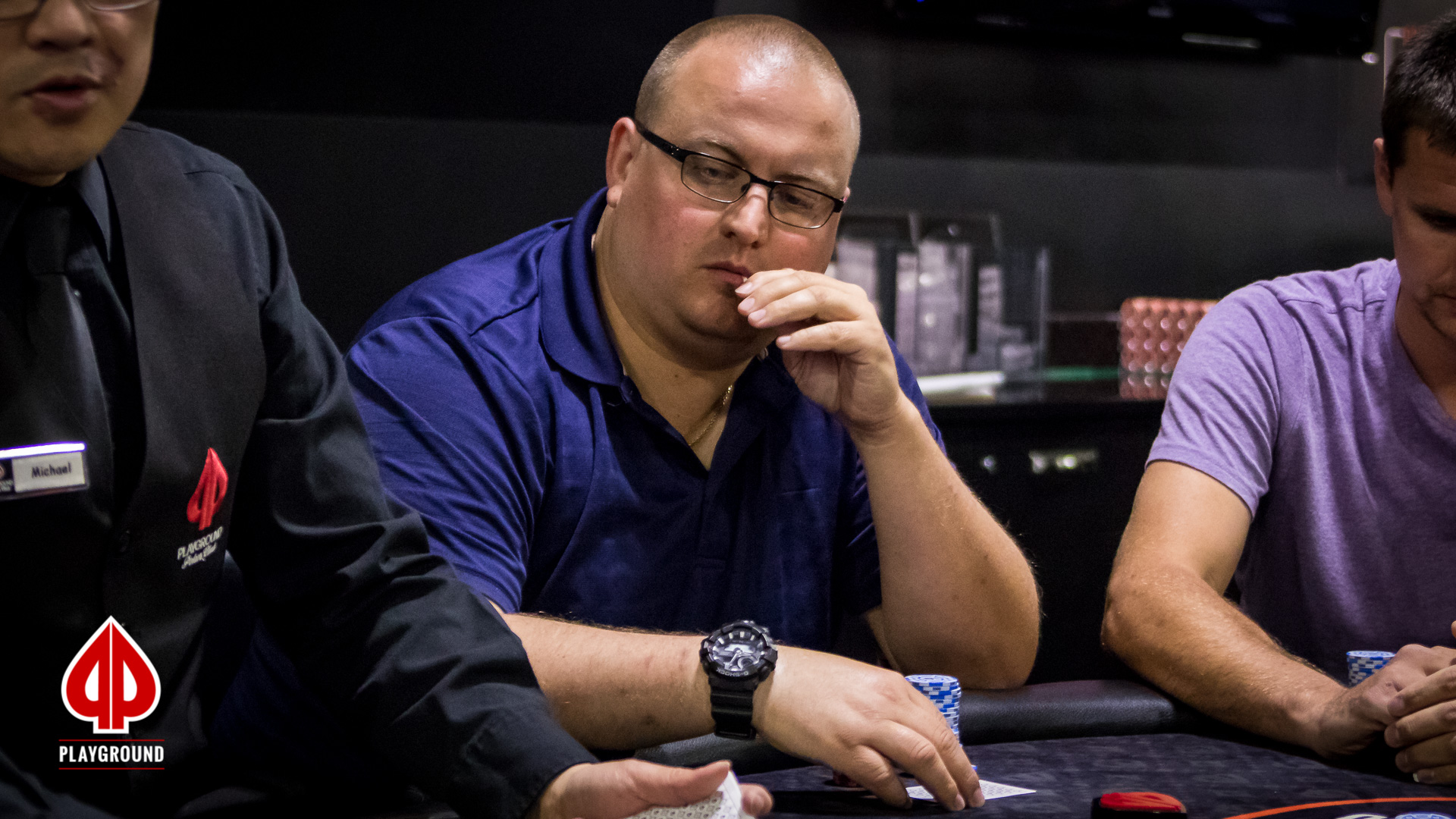 The discussion for an ICM chop took several minutes.  But in the end, a deal was made among the 9 remaining players.  Each player was set to receive the prize as shown in the following table + $730 would be kept aside for the champion, on top of his prize money.

No sooner had the deal been struck than 5 players busted in an avalanche of consecutive all-ins.  In less than 10 minutes they had all been sent to the rail; most of them by Joseph Roberts: 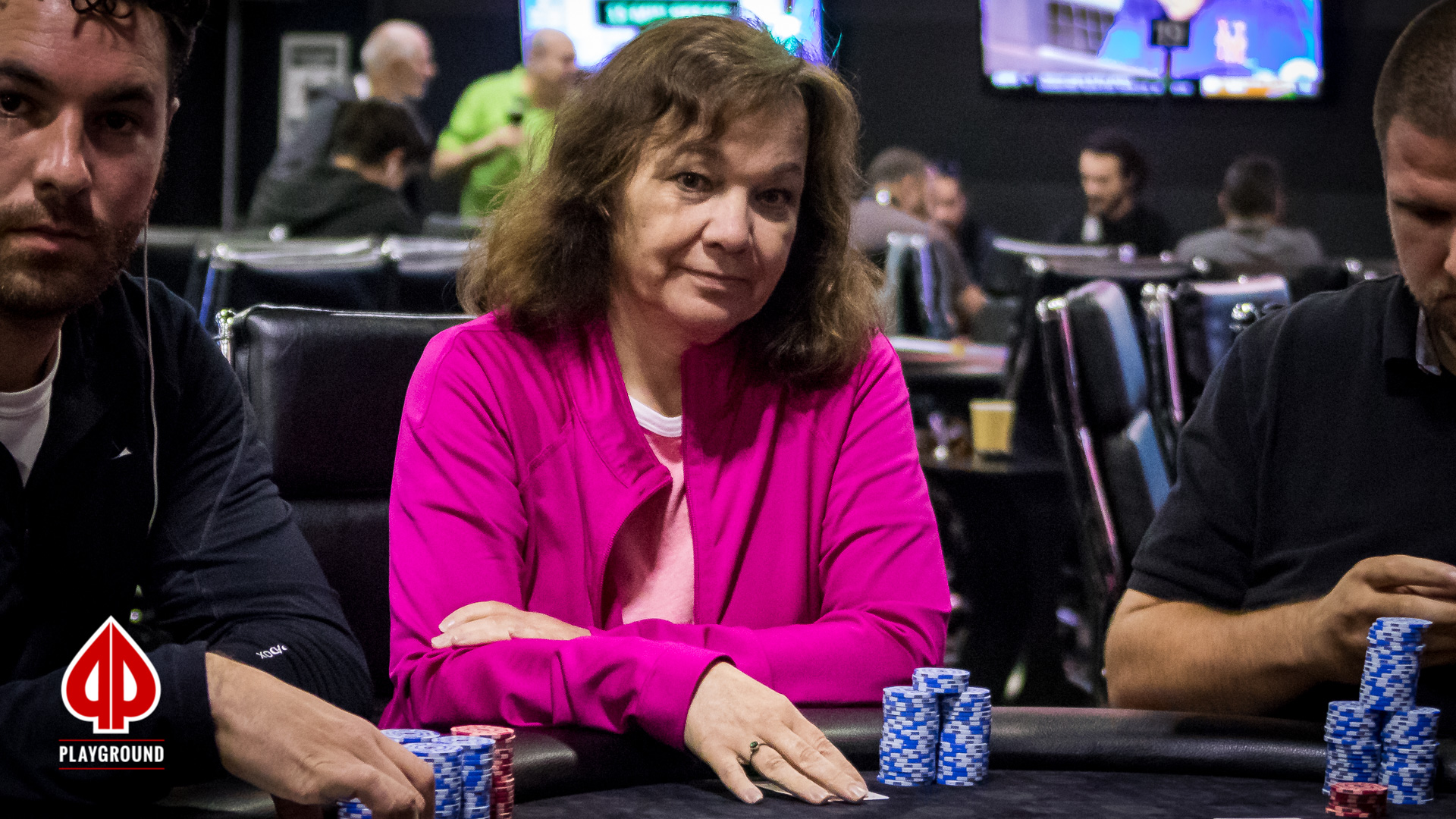 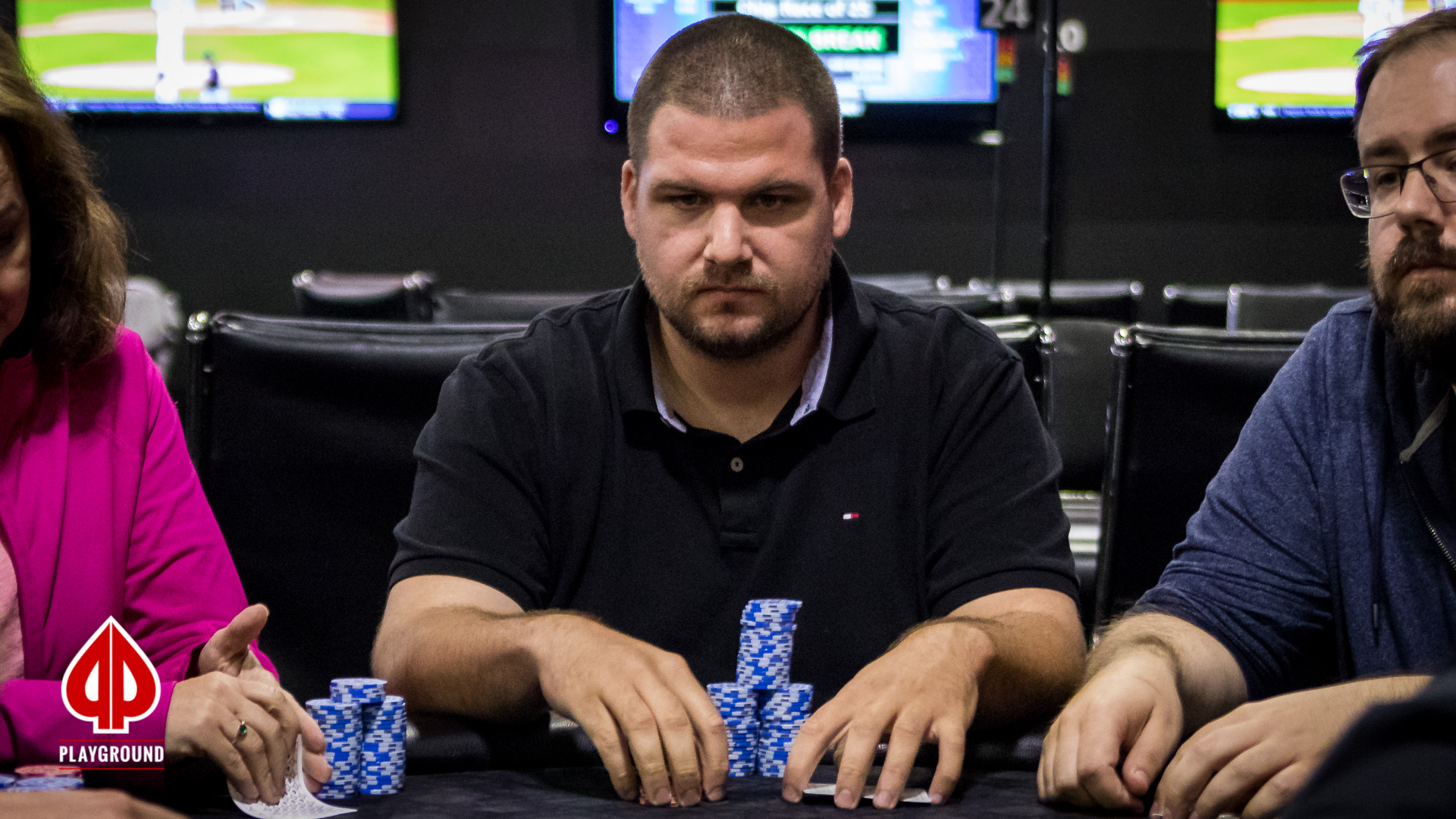 Only a few hands after the onset of the final table, Rene Gauvin busted in 10th place.

The clock has been paused at the request of the players, in order to allow them to discuss a possible ICM chop. 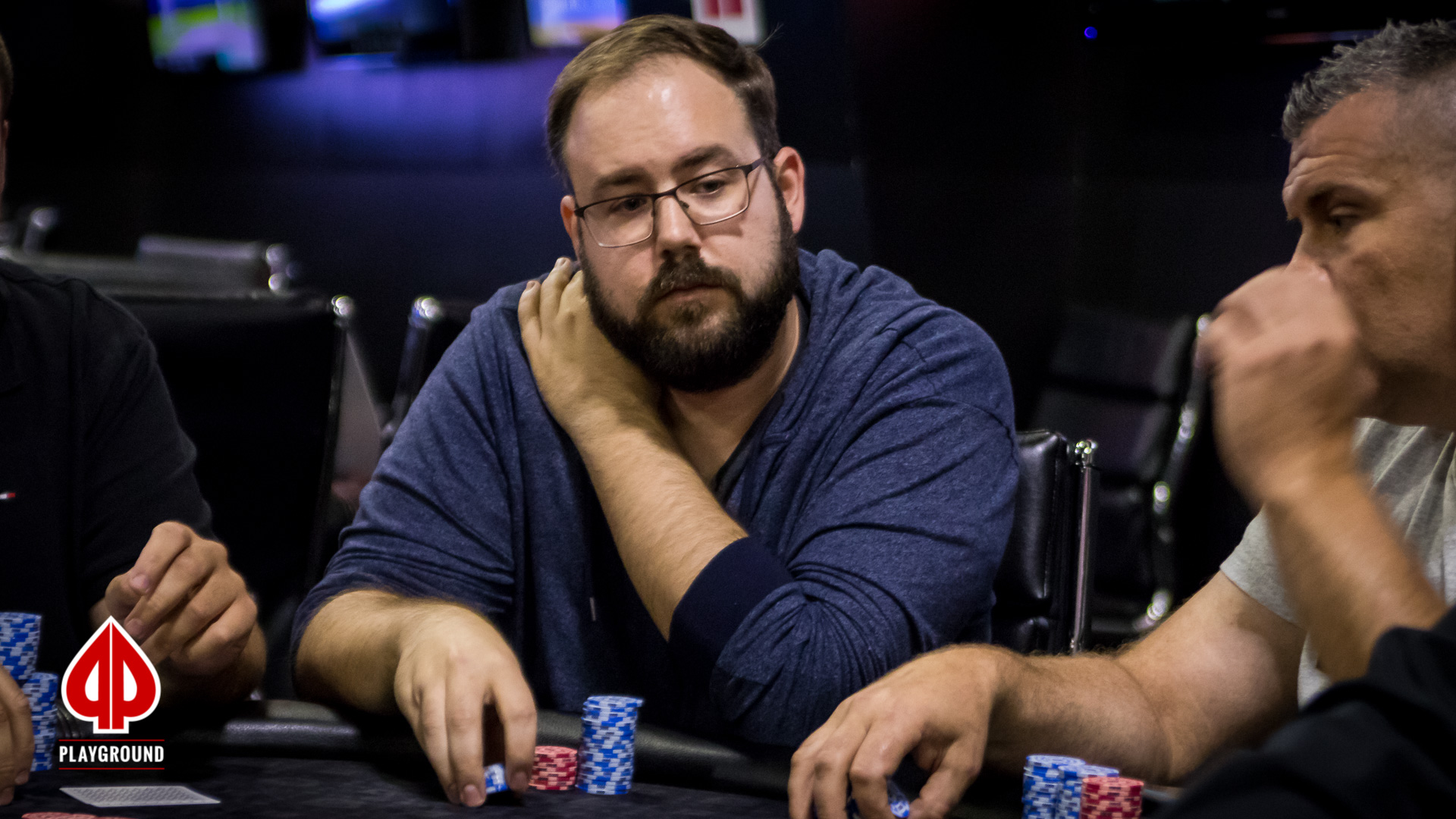 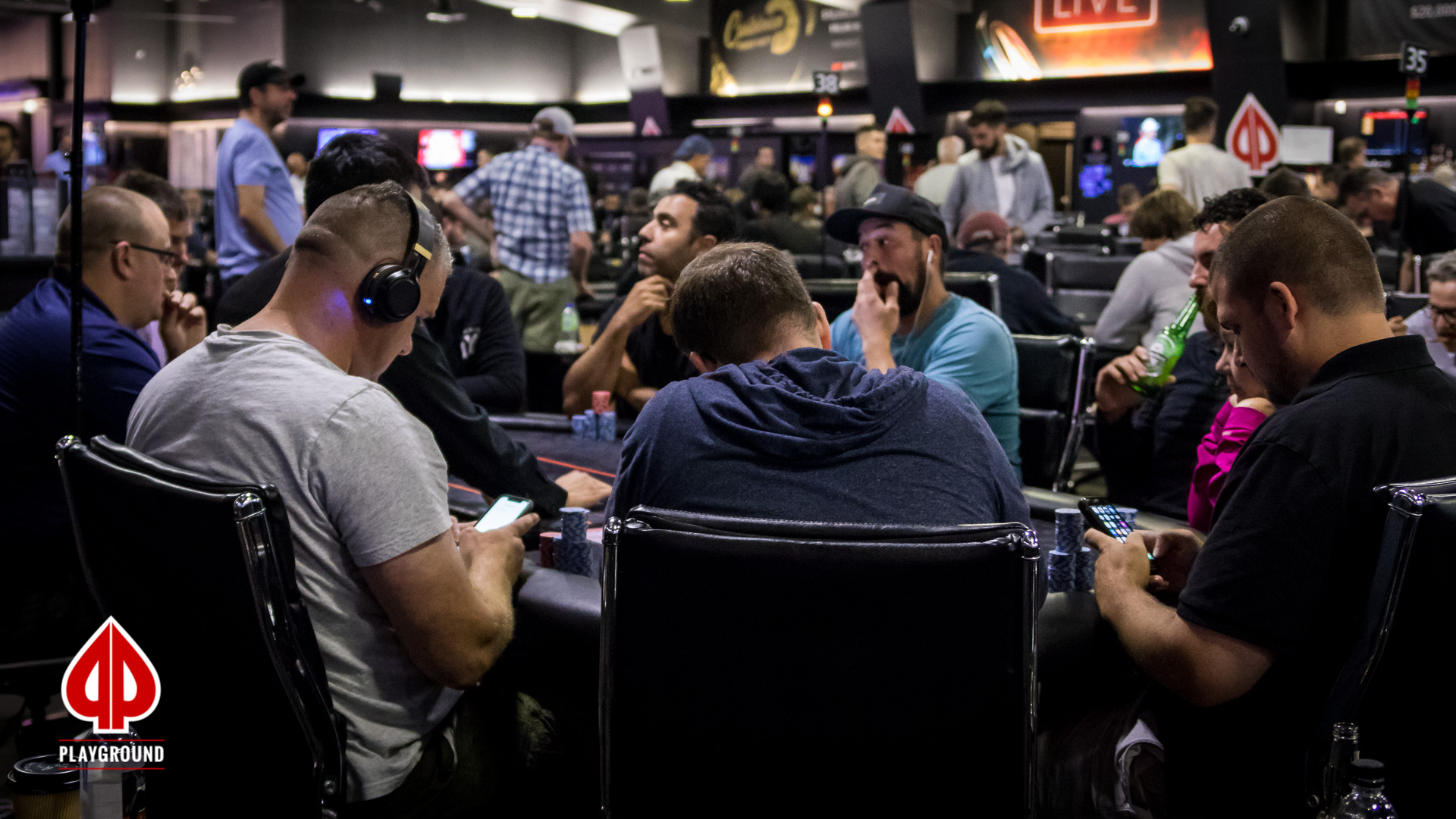 With two tables left, the players are feeling the squeeze from the blinds as their tables get shorter and shorter.  There will be a full seating redraw for the final table when there are ten players left.  Until then, the short stacks are feeling the heat.

Here are the eliminations so far:

There are now two tables left in the tournament, with 16 players still in.  Patrick Giroux is at the helm of the leaderboard with 650,000 chips.

Here are the full chipcounts: 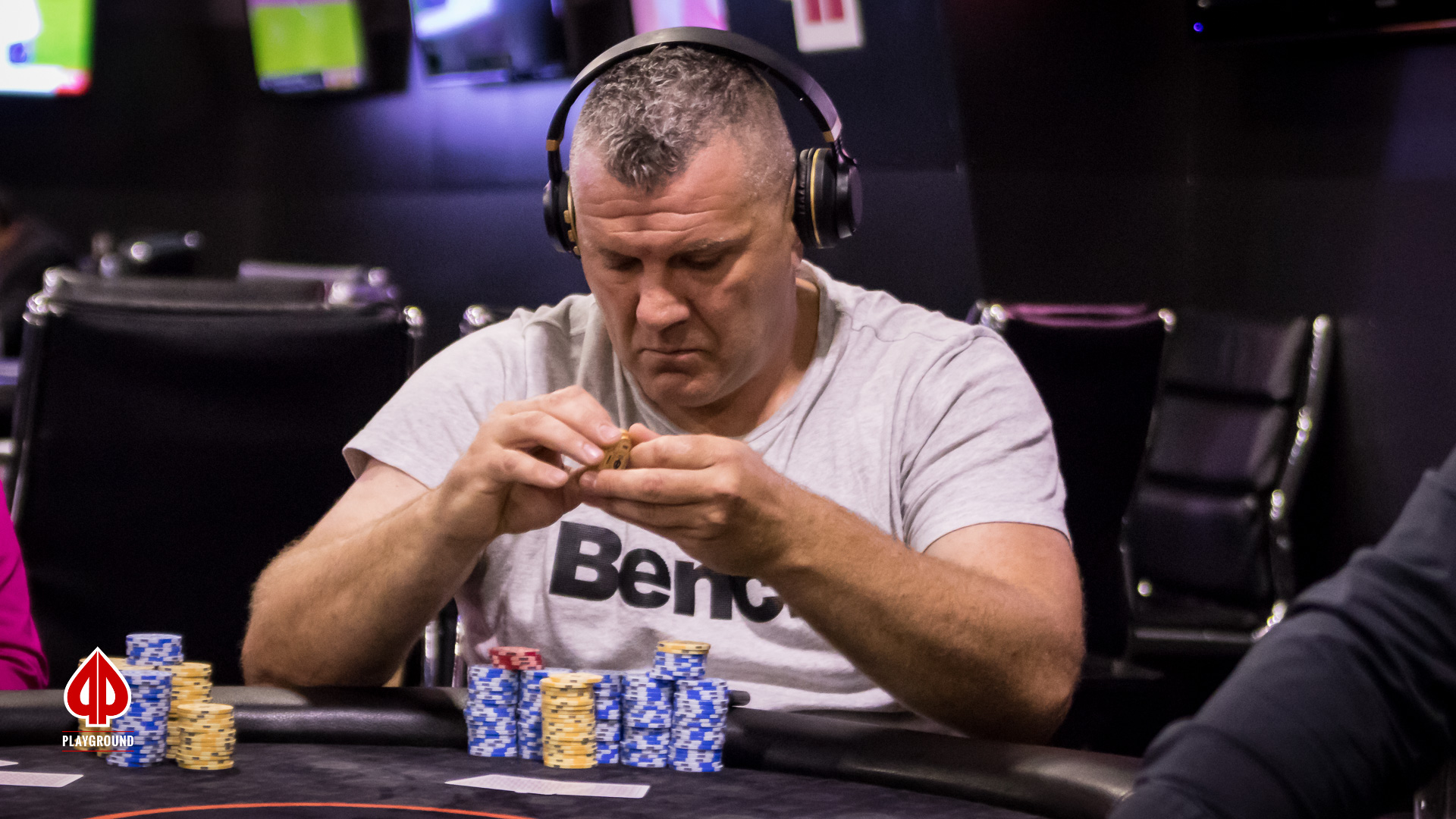 The dreaded bubble time is upon us.  There is almost no way to avoid it, someone has to go down…

Today it was Ayo Smith who had to settle for the unfortunate bubble label.

The remaining 24 players are now guaranteed some prize money.  There is undoubtedly going to be an increase in the action intensity at this point.

Here are a few photos of the players in action, from the previous levels.

With a relatively short stack, Cole Skye pushed all 66,000 chips in his name in front of him.  He got a unique caller in Alain Lavoie.  When there was no more action, Skye tabled his hand:

and looked expectantly at Lavoie.  Lavoie smiled and tabled his hand:

.  Skye looked to the ceiling with a well-known “of course” look on his face.

They both spiked an ace on the window:

on the turn bothered no one and changed nothing.  The river was another story:

; giving the win to Skye with two pairs.  The hand left Lavoie with barely 15,000 chips.  Playground dealer and ever the gentleman, Cole smiled apologetically and said, “I know I was supposed to die here…”, as he stacked his 151,000 chips, now just a little below the average.

So Skye gets some much needed chips and Lavoie is reduced to chose one of the next 3 hands to tempt fate before the blinds hit him.

The tournament is a few eliminations away from the money, the play will go into hand-per-hand mode shortly. 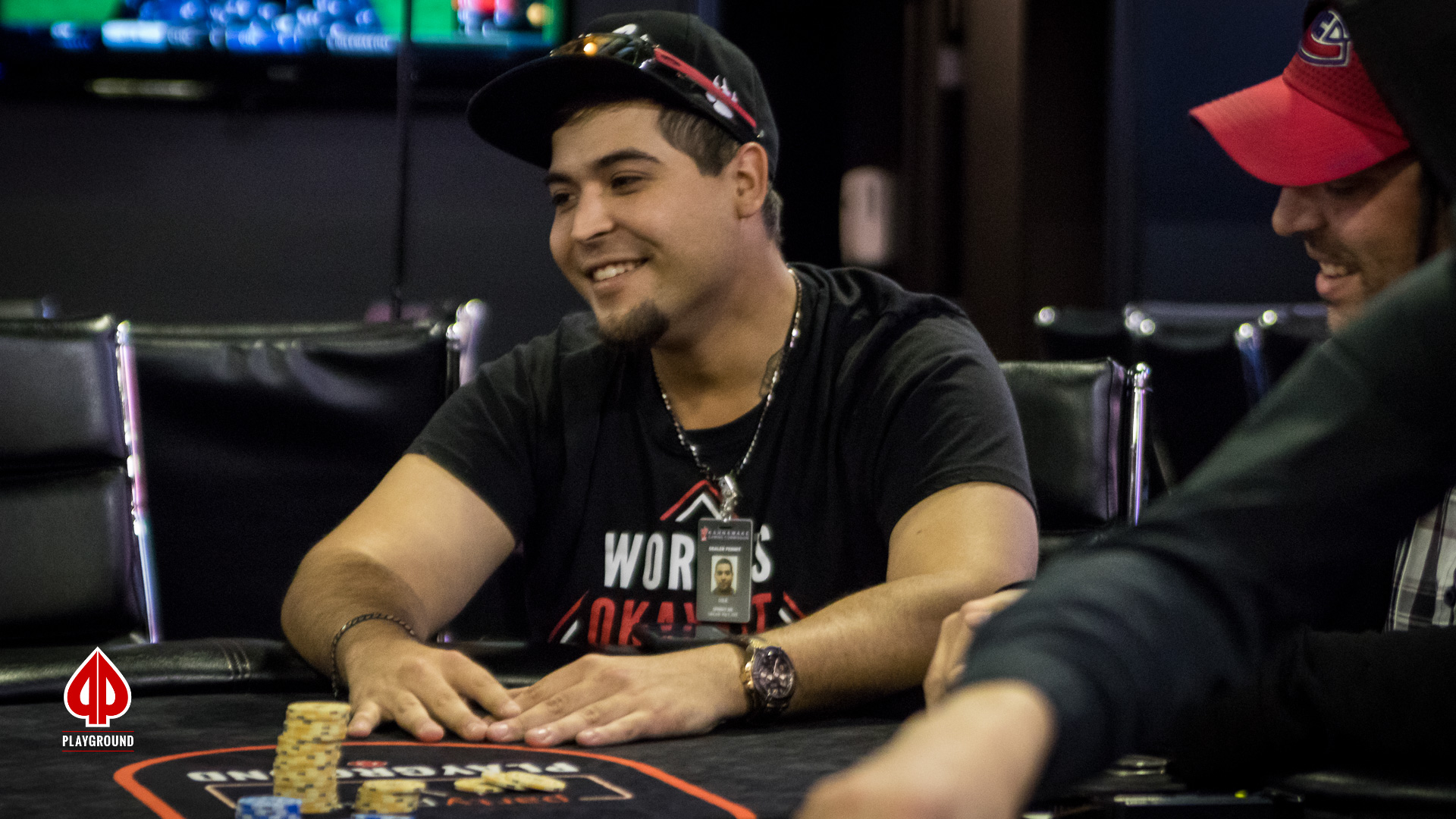 The players are enjoying a break, which allowed us to survey the field.

There is still a good way to go before the players reach the prizes.  The action has picked up somewhat in the last few rounds as the ratio between stacks and blinds intensifies every time the blinds go up. 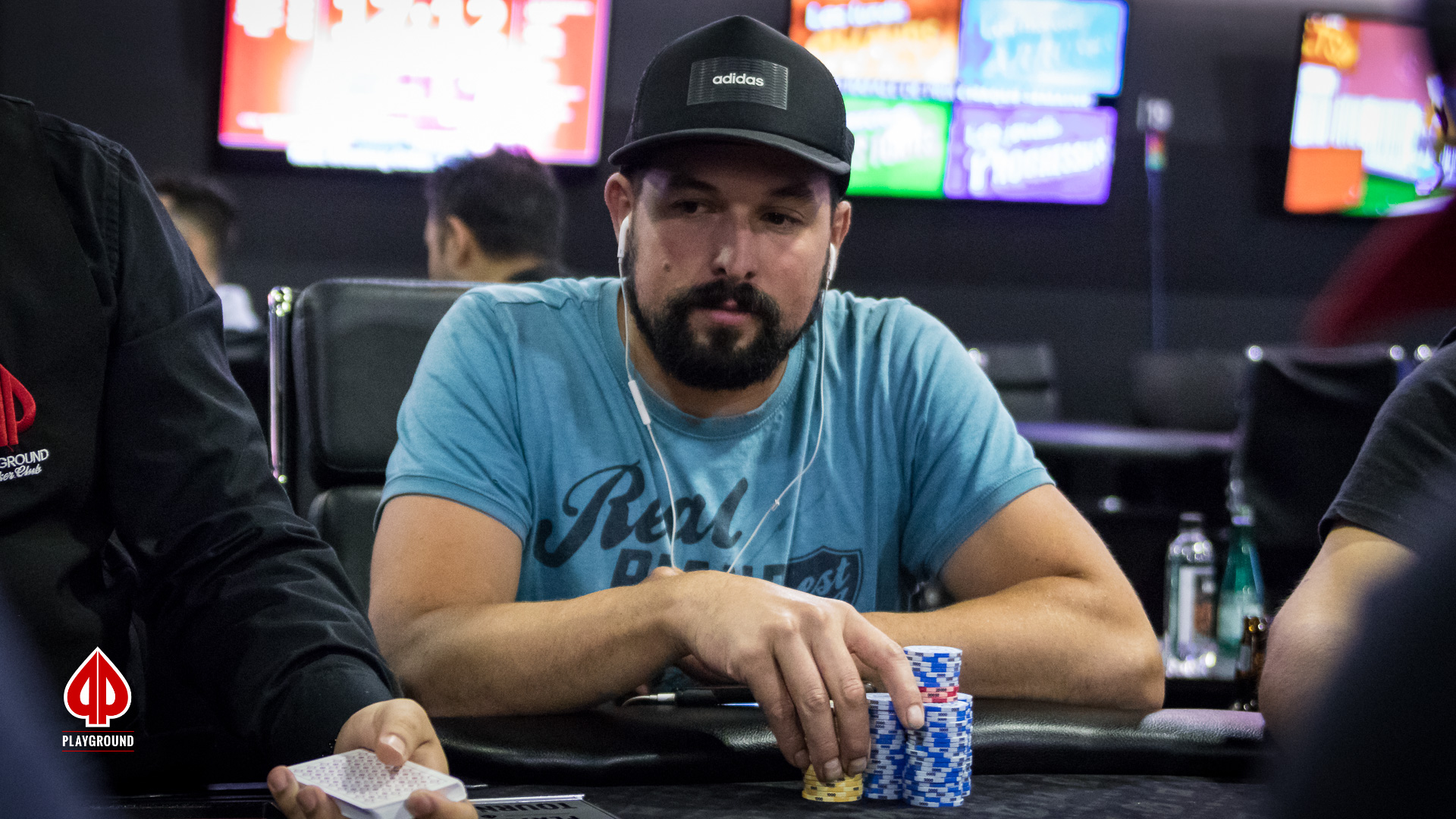 We arrived at table #31 to witness a peculiar setup:  3 players all-in, with jacks, queens and kings.

Underdog Ransom was hoping for a miracle, so was Laramee.  Iacovella, as expected, just wanted the odds to stay in his favor.  And for a while he got his wish as the board was revealed:

.  Then the runt of the royal litter made an appearance on the river:

, thus awarding the huge pot to Ransom for trip jacks.

Laramee, ahead from the get go, was left with 11,000 chips after the dust settled.  Ransom, on the other hand, had gone from having about half the average to almost double the average.  Not bad at all.

In the following hand Laramee put his 11K to work and tripled-up.  But he was seen leaving the tournament hall a few minutes later. 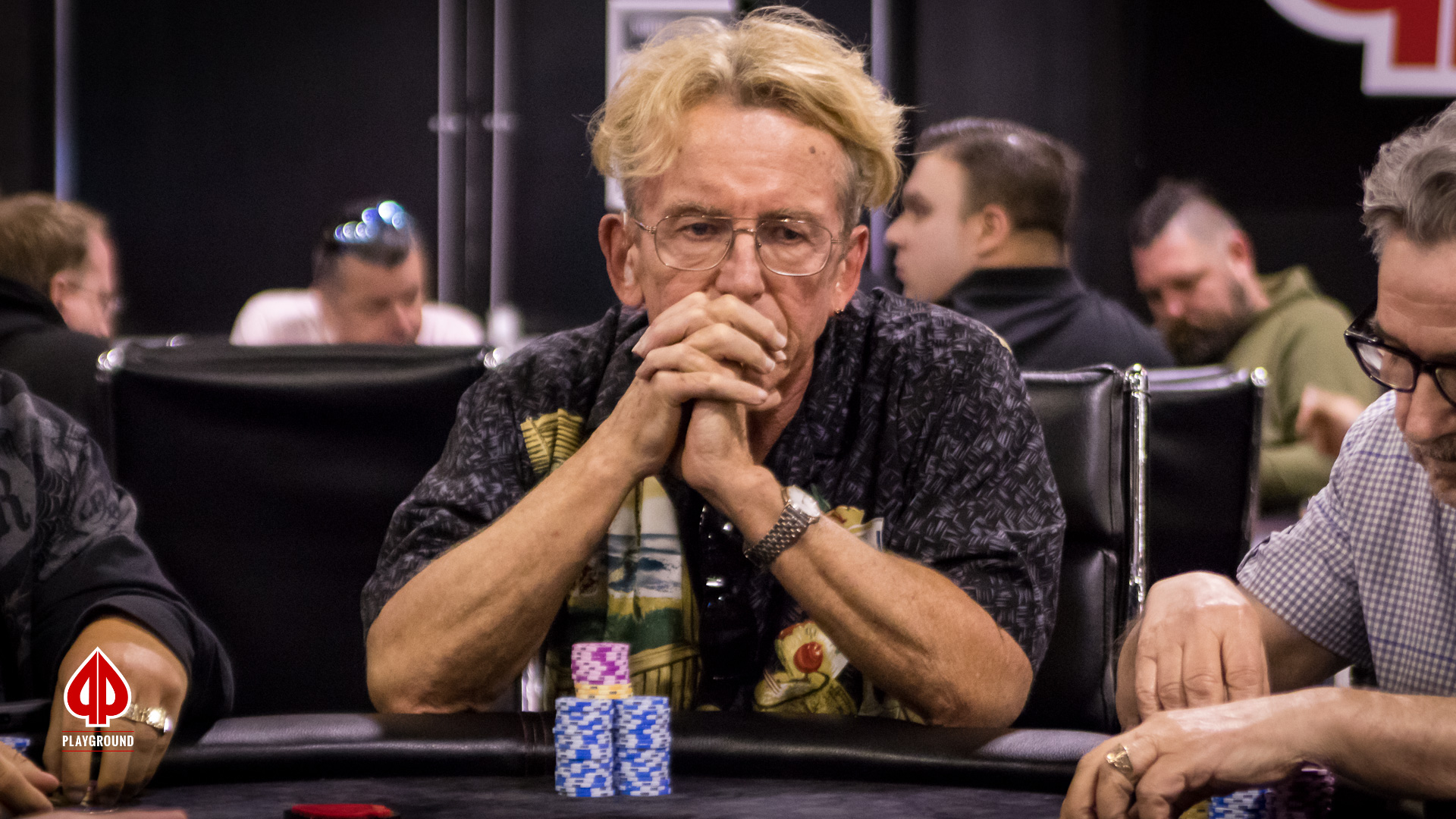 As per our regular routine, we hit the tables during the break in search of the biggest stacks.  What was peculiar about this time is that the chips seem, somehow, to have been redistributed equally among the players.  We found only one player above 150K: Lino Agostini, with 151,500 chips.  The unique player we could spot with almost as much was Daniel St-Denis, sitting on 135,000 chips.

Usually, after 4 hours of play, numerous leaders emerge, but not today.  It will be very interesting to see how the tides turn along the road. 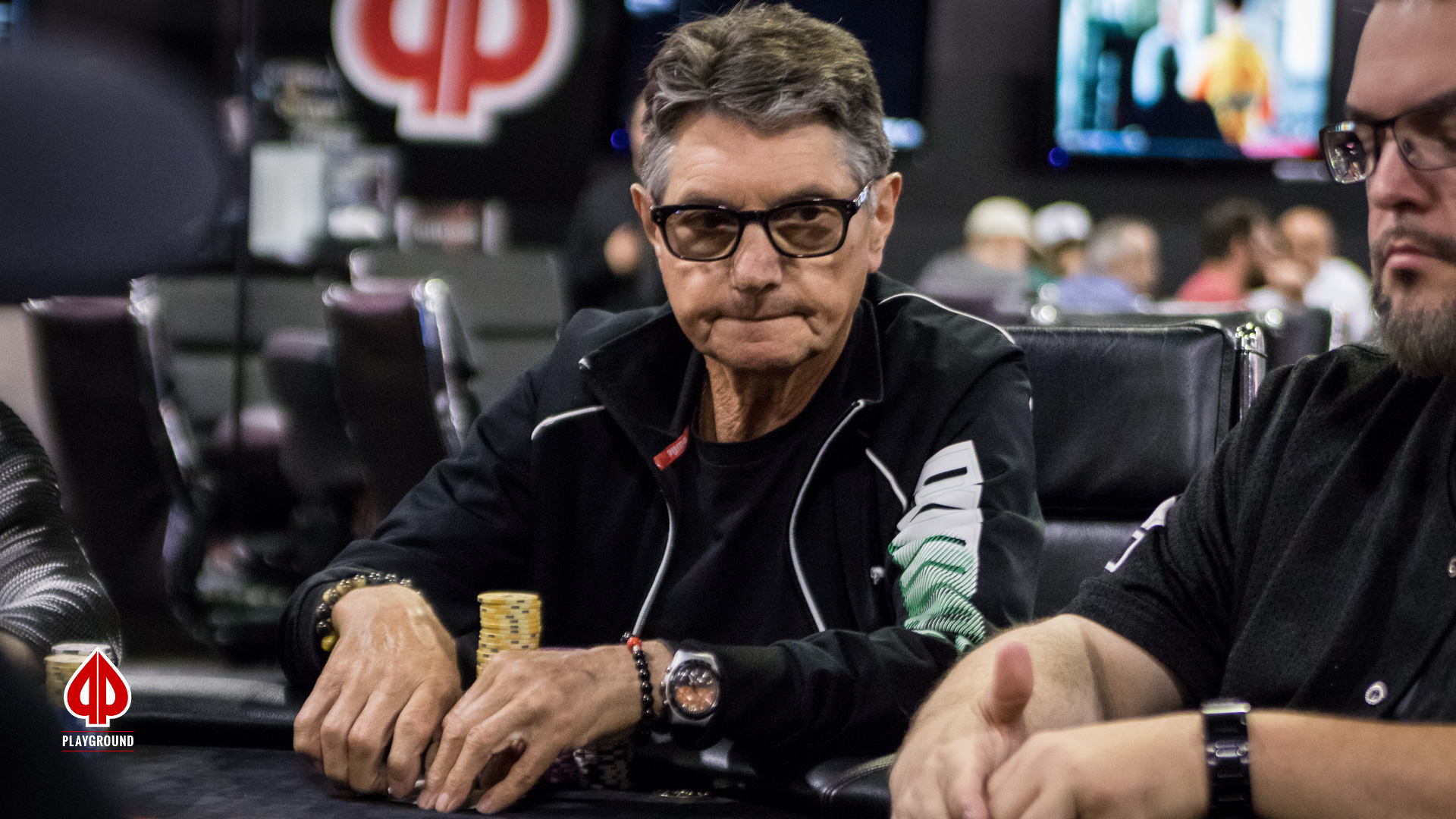