Playground and partypoker LIVE have announced a key addition to the 2019 MILLIONS North America schedule: a $25,000 + $300 Super High Roller event. Action will get underway at 3:00PM on May 25 and will continue with a restart at 12:00PM on May 26. As usual participants of this class of tournament have become accustomed to, play will be 8-handed throughout, and it will feature 40-minute blind levels. Registration will be open throughout Day 1 and through the first 4 levels of play on Day 2. 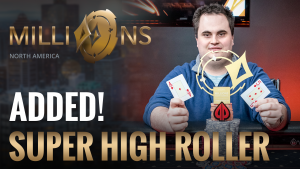 This will be a reprise of the successful $25K SHR that was part of last year’s MILLIONS North America. That event saw a star-studded field take to the felts including a rare appearance by Viktor Blom. Joining him from the other side of the Atlantic were Niall Farrell, Toby Lewis, Manig Loeser, Marc Macdonnell, and Roberto Romanello. There were plenty of Americans in the field as well, including Sean Winter, Alex Foxen, Darren Elias, and Chance Kornuth, plus a good measure of home-grown talent as well, including: Pascal Lefrançois, Kristen Bicknell, David Ormsby, and Marc-Olivier Carpentier Perrault.

Eventually, the first edition of this tournament came down to a battle between two of the nicest people in poker, Anthony Zinno and Christopher Kruk. The duel ended in disaster for Zinno who, after getting it in good with a pocket pair, could do nothing but watch as two larger pairs appeared among the community cards, giving Kruk the win in the hand – and the tournament, holding just Ace high!

With $8,000,000 in total guarantees, there was already plenty of motivation to play a full MILLIONS North America schedule. With the Super High Roller added, there’s nothing more to say other than… “we’ll see you soon!”