The High Roller, Event #4 in the 2019 WPT Montreal, just came to close. The 3-day tournament, priced at $5,000 + $300, was the biggest buy-in event in this festival, and it transpired through the amazing skill level that we witnessed since Monday.

The crowd was a who’s who of the poker scene, both local and international. The event’s Day 3 was positioned just before the last Main Event starting flight which made it a great option for pros to face each other and get the juices going before the big dance.

Kristen Bicknell, Charles L.B., Marc-André Ladouceur, Jeffrey Cormier and Tony Dunst are just a few of the great players who made Day 3. Tony Dunst, after securing the biggest payout in a 3-way deal, left Louis Boutin and Alex Ding heads-up for the title. Stacks, however, were very uneven, favouring Ding.

Ding increased his lead by calling down a 3-barrel bluff with a flopped top pair that didn’t look so great anymore on the river, an amazing call down. Boutin, however, came back with a double-up. Then he gained even more chips until they were almost event. At that point, a bumped pot had them escalate bets on the flop until they were all in:

Ding’s hand was certainly not what Boutin wanted to see. The runout, however, came clean, and ding was left with just 450K out of the 4 million chips in play. After gaining a few chips, his fatal hand arrived. Boutin min-raised pre-flop, and Ding called. They both checked the flop, but Ding fired 120K on the turn, and Boutin put him all-in. Ding made the right call – a great call! – but the river spelled his elimination (hand pictured below). Great tournament by both! 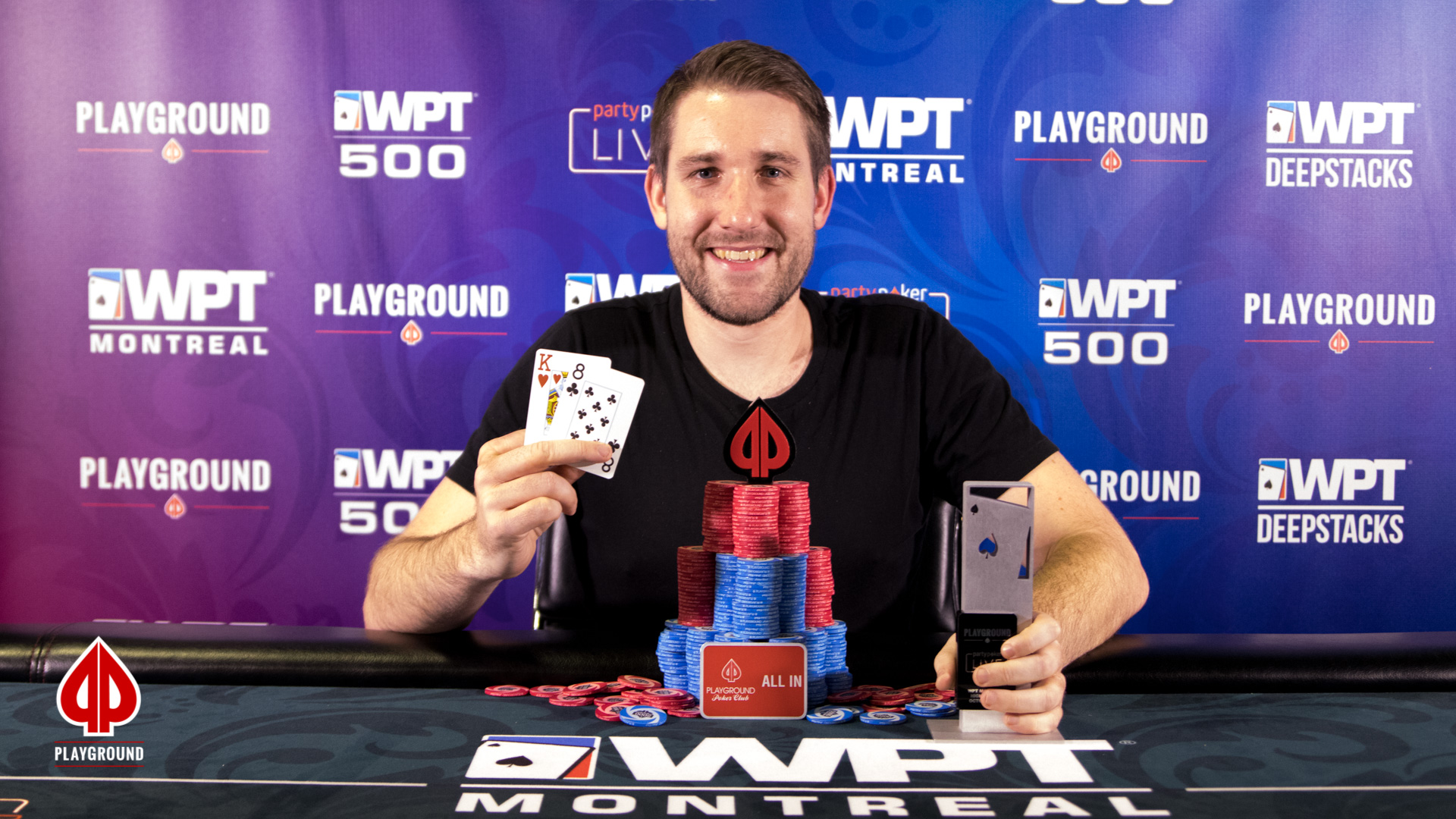 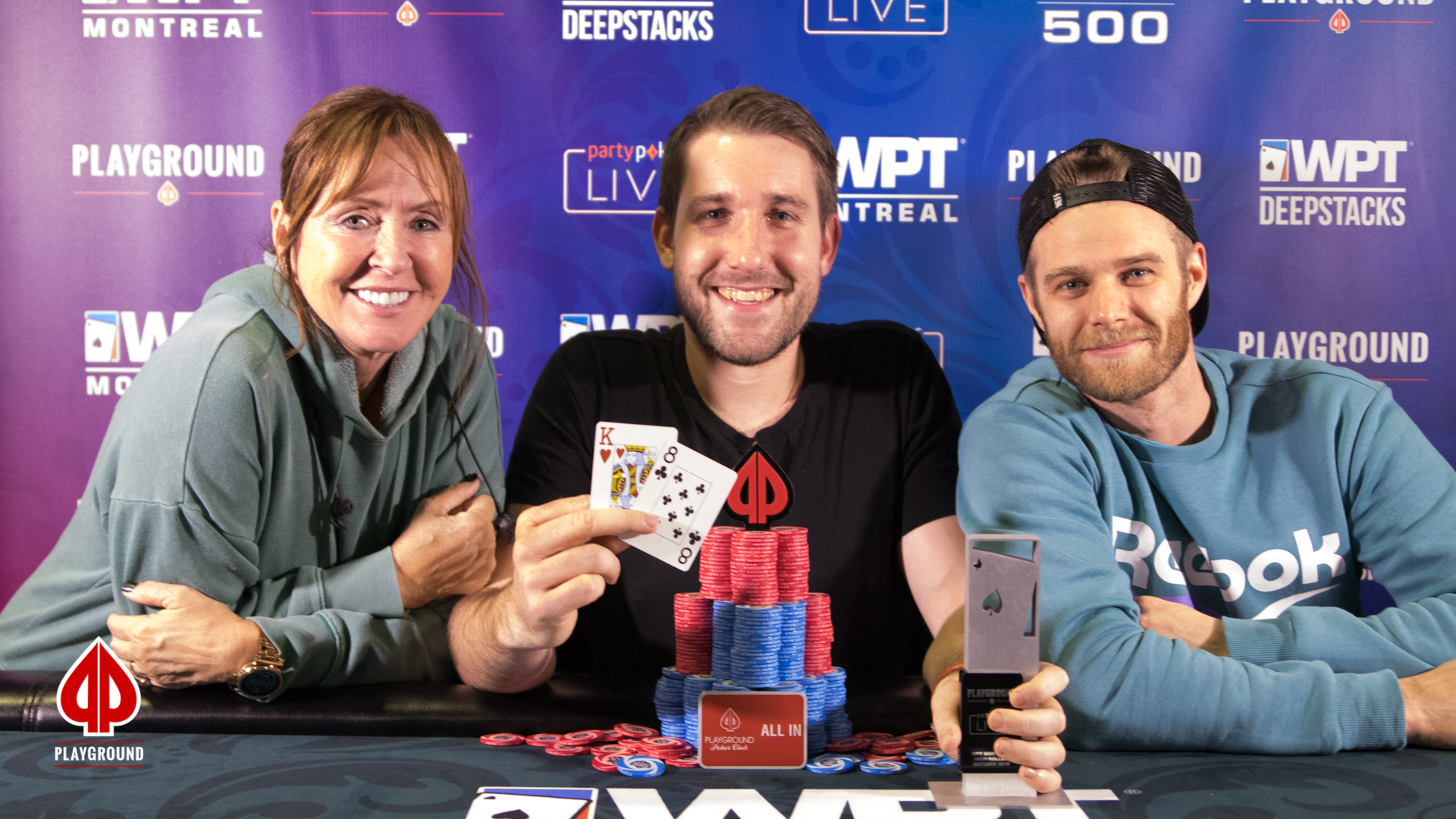 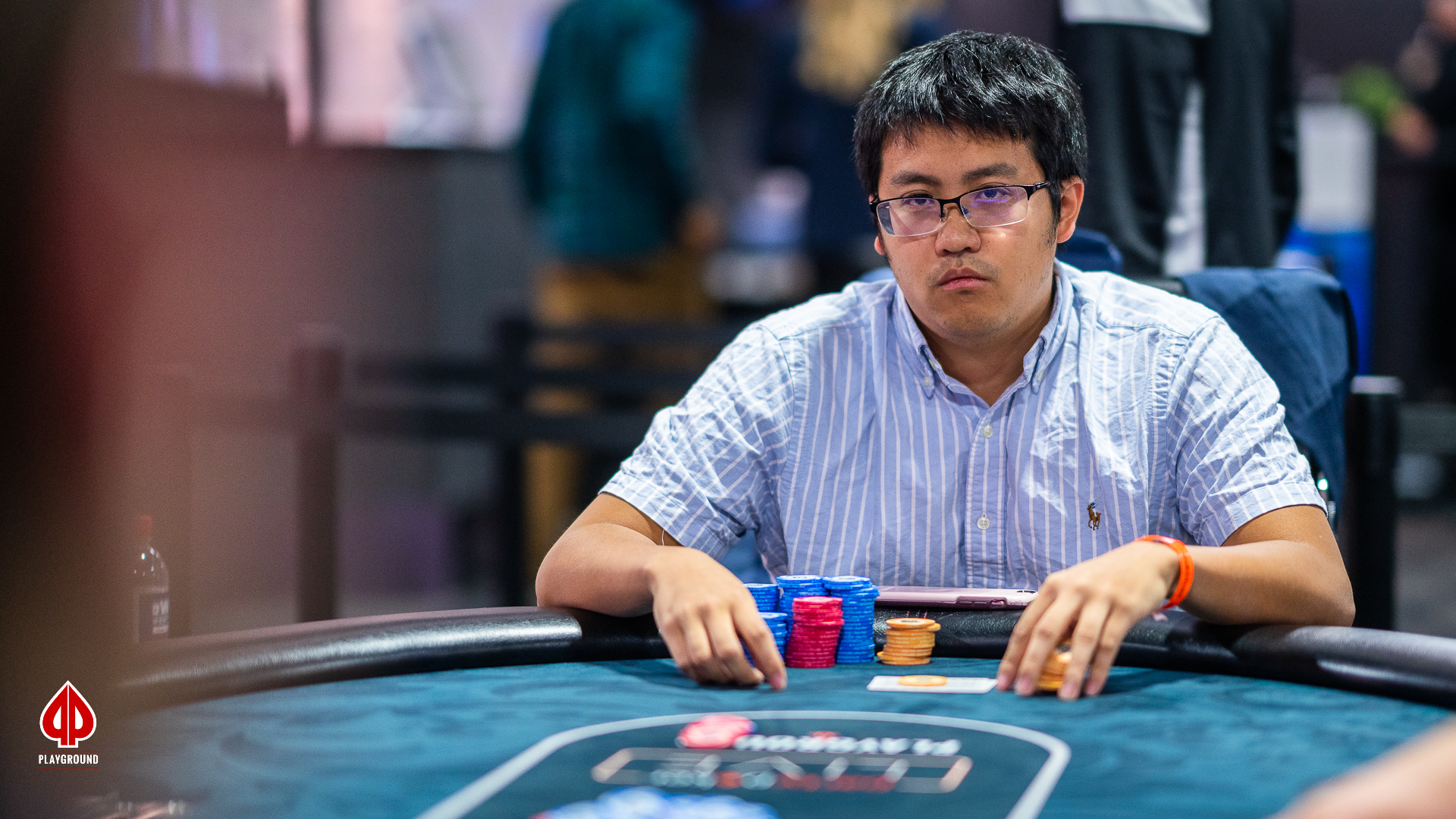 Poker celebrity Tony Dunst, after crushing the tournament for the last few levels of Day 2 and all through Day 3, went out in a two-act elimination, proving that he’s human after all. Alex Ding took half his stack after hitting one of two outs – he needed to hit a set of fives after Dunst had hit a pair in a showdown – then went one to win a coin flip with ace-king against queens.

Luckily for Dunst, these events happened after he had secured a $124,769 payout through ICM chop. We wish him all the best in the Main Event. Congratulations on your deep run! 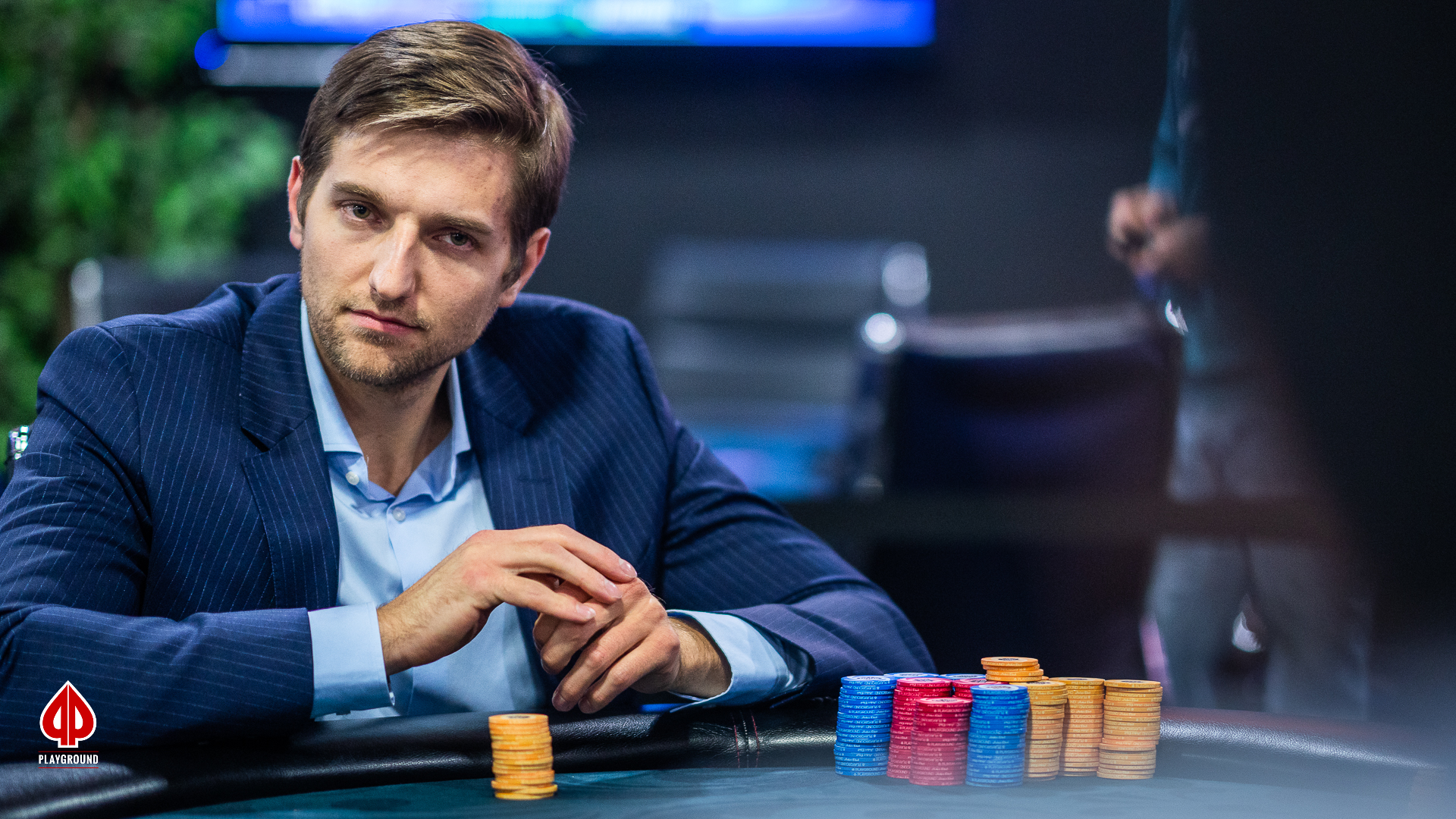 Players are on break again. Since the chop was agreed on, the atmosphere has been a lot more relaxed on the High Roller final table, and the range seems to have widened a bit. Chips are certainly moving faster. Here are the updated counts:

They are now playing a winner-take-all 3-way brawl. Here are their secured prizes:

John Krpan, the man in the cowboy hat, was shown the exit by Alex Ding. These two were the less wealthy on the table when the hand started, and they both were dealt a hand that you simply can’t walk away from when you’re this short. Krpan’s

did not manage to upset Ding’s

, and that was the end of his High Roller adventure. He wins $57,915 for hitting the podium. Excellent work!

With this win, Alex Ding has joined Louis Boutin and they share second place with just over a million each, while Tony Dunst still has around 2 million.

The four last men standing in the High Roller event just took a short break. This allowed them to stretch their legs and us to update the chip counts. We knew that Dunst was still crushing, but were eager to know just how much. Here it is:

Stephen Deutsch was in the big blind when the fatal hand came. He had about 10 big blinds to his name, and Alex Ding, sitting in the small blind, a little bit more. It was a rare unopened pot, and Ding opened with an all-in bet. The call was quick, and when the hands revealed were way above anyone’s expectation:

The board did not bring Deutsch the desired queen and he left in 6th, worth $32,590. Congratulations on a nice run!

Marc-André Ladouceur was next. Tony Dunst has been bullying him all day, 3-betting a lot of his open raises. Dunst was also the player who knocked him out. This was another pre-flop all-in:

The flop revealed two clubs, and Ladouceur was drawing dead on the turn. He played a great game, managed to climb up the leaderboard at the end of Day 2 with inspired play, then all the way to mid final table, but in the end, Dunst knew how to play a big stack too well. He takes $42,810 for his great 3-day run. Well done!

This leaves four players in the field, with Dunst increasing his lead by the minute. Here are their photos:

The players have just returned from their latest break, and only six players are left at the final table.

Tony Dunst has kept up his winning ways all afternoon to build up a stack of roughly 116 big blinds. Since the last break, he has only extended his chip lead, as he covers the second stack, now held by Alex Ding, by more than a 2:1 margin.

Two more players have hit the rail in the High Roller. Tony Dunst has extended his chip lead and is currently playing a stack of around 1.4 million, good enough for about 120 big blinds at this stage. Louis Boutin remains in second place, with a stack of approximately 800,000.

Charles LB busted in eighth place, good enough for a $20,700 payout. Charles lost a big pot prior to the last break, which made him the short stack at the table and was eliminated shortly after play resumed.

Edward Hislop was the next player eliminated, but he walked away with a $25,570 payout for his deep run.

The High Roller is down to only eight players. Jordan Westmorland was the first player eliminated from the final table, earning him $17,310 for his deep run.

Tony Dunst has kept up the strong play that brought him to the top of the leaderboard and maintained his chip lead over the second largest stack in the field, held by Louis Boutin. Dunst is playing a stack of more than 100 big blinds, a deeper stack than you will see at most final tables.

Following Jeffrey Cormier’s elimination in tenth place, the High Roller has reached the final table. Cormier will collect $17,310 for his deep run.

Tony Dunst remains the overall chip leader, with a significant lead over the second stack in the field, held by Louis Boutin.

After only one hour of play on Day 3, the field in the High Roller is down to only 10 players.

Kristen Bicknell was the first to hit the rail this afternoon. Her final hand was a three-bet shove with a relatively short stack from the small blind over Jeffrey Cormier’s button raise. Bicknell’s raise picked up a cold call from Rahime Chaalan in the big blind, before Cormier moved all in over the top, successfully chasing Chaalan out of the hand. Hands were tabled to reveal a flip;

for Bicknell against Cormier’s

. Cormier took the lead thanks to an ace-high flop, one that he would not relinquish. Bicknell will collect $13,385 for her thirteenth place finish.

Rahime Chaalan and Michael Wang were eliminated shortly after Bicknell, each collecting $14,960 for their efforts.