The WPT Montreal Main Event was an amazing race. 1109 entries were accounted for, enough to surpass the guarantee by over 10%. Players came in from the Online Day 1 & 2, three live starting flights and even the live Day 2, which allowed entries and re-entries for a duration of four levels. Towards the end of Day 2, the wonderful prize pool was being announced and the bubble came shortly after. The bubble burst was also the end of day, as Day 2 was coming to a halt when the money was reached.

Day 3 started with 159 players at the tables, all of them in the money and ready to make that min cash grow. Already in Day 3, the field was looking extremely strong, with all-star players on every table. Only 10 of them made it to Day 4, including Mike Leah and Michael Watson, two of Canada’s strongest tournament players, Kristen Bicknell and Kelly Minkin, two of the strongest female players in the world, and many more poker aficionados.

One by one, these amazing players were eliminated, until there were only two left: Adedapo Ajayi and Geoffrey Hum. They only played a moment, because the final hand came unexpectedly, at the very start of the heads-up match. At that moment, he stream was showing Ajayi with 16.6M and Hum with 25M.

Ajayi opened from the button to 800K, and Hum made a quick call.

What a monster flop for Hum. He quickly checked, passing the action to the raiser, hoping for fireworks. Ajayi, looking at a nice flush draw, continued with an 800K bet, and Hum made it 2.6M to go, a great door-opening bet. Ajayi took the bait and made it 6.9M to go!

The bet was very strong, and even though Hum had a very solid hand, he must have thought that there were at least a decent chance of him having to hit the heart. Despite these considerations, he moved all-in. Ajayi reluctantly called, way too invested in the pot at that point to back away from it. The

on the turn sealed the deal, and we had our Main Event Event Champion!

Congratulations to Adedapo for an excellent tournament and to Geoffrey for a great performance a great show and the win! 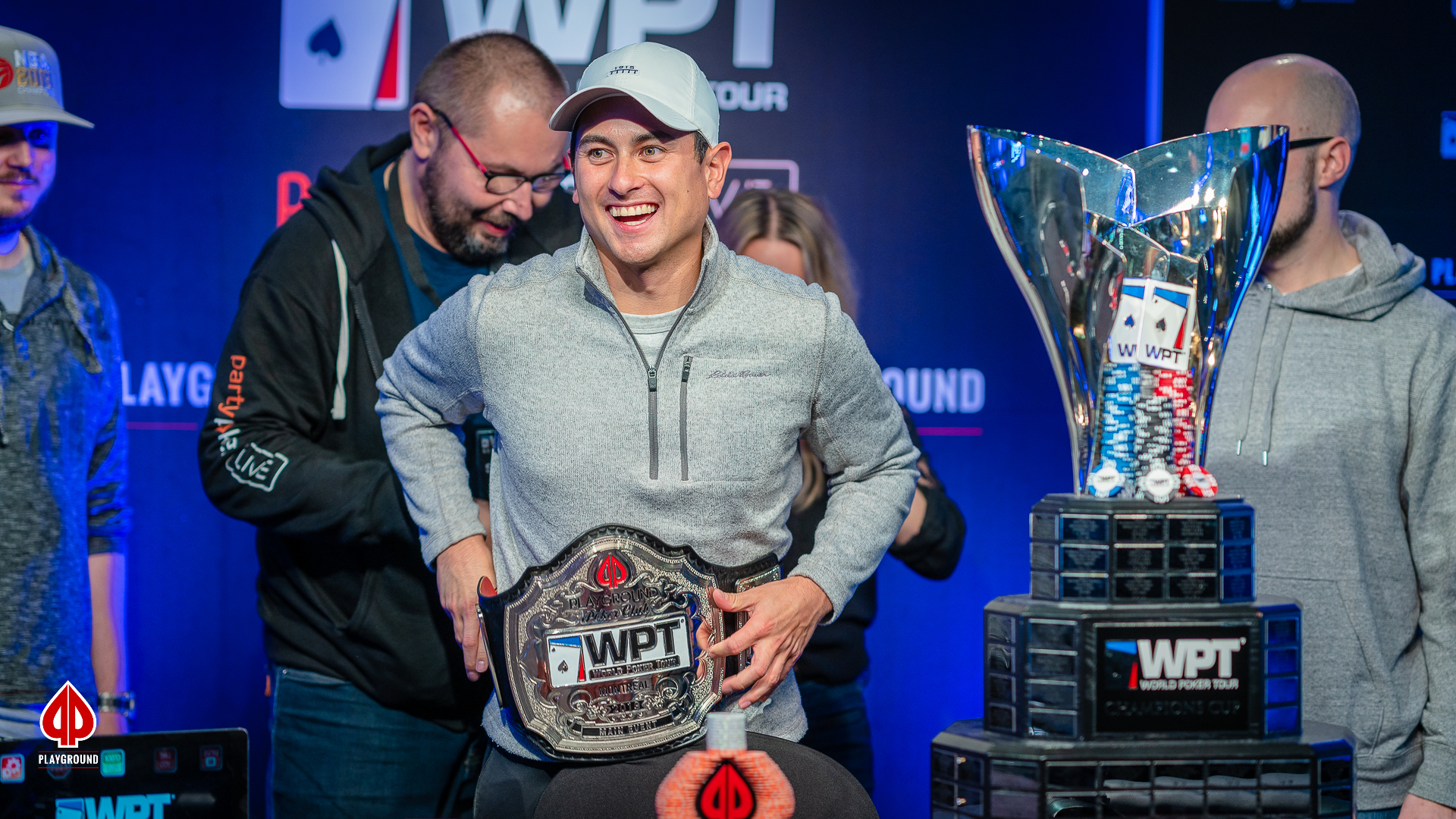 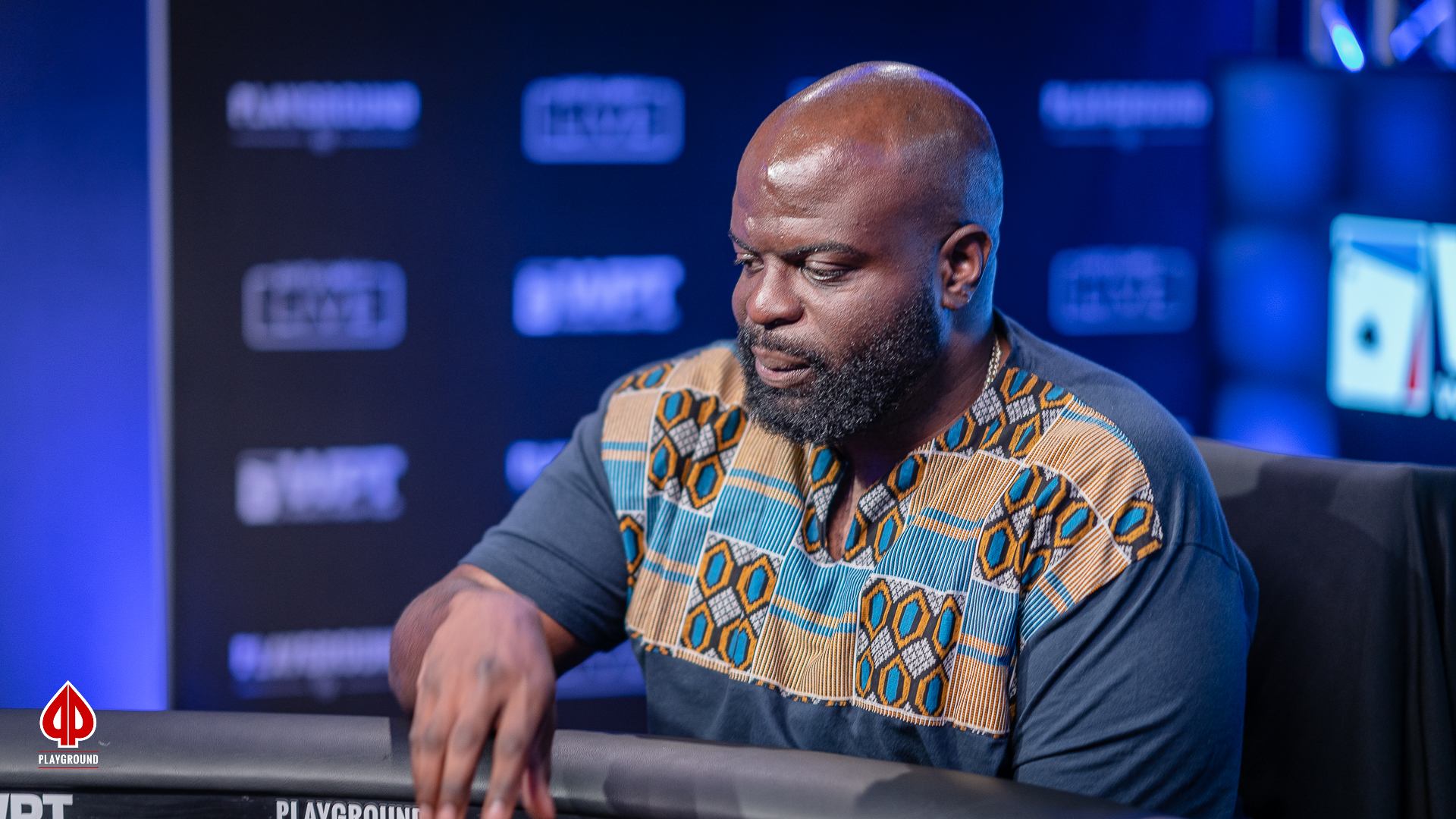 Joseph Cheong was sent to the rail after a very unfortunate trick from the deck. Cheong, called a “sicko” by expert commentator Ari Engel – a great compliment in poker – brought an unbelievable game to the final table. He managed to retain chips when he was down and even play a few tricks on his opponents, while maximizing his good hands. Lady luck, however, had a nasty fate for him in mind.

Cheong opened to 700K and Adedapo Ajayi made the call. Geoffrey Hum, however, picked up a nice pair and 3bet to 2.8M. Cheong thought for a bit and announced all-in for a total of 8.6M chips. Ajayi got out of the way and Hum completed.

A brutal flop for Cheong, especially considering that Ajayi had folded a jack. Cheong cashed $235,290 for his great performance. Congratulations!

Adedapo Ajayi and Geoffrey Hum are now playing heads-up for the WPT title. Good luck to both!

Our three finalists are taking a short break. Here are the counts:

Geoffrey Hum, Adedapo Ajayi and Joseph Cheong are in the trenches, fighting for every pot and showing great skill. The 150K/250K/a250K does put a lot of pressure on the players, and so does the 3-handed nature of the game.

Cheong started the 3-way affair as the small stack. He then doubled up on Ajayi to about 10M, before slipping back a little bit. He now doubled again when going all-in with

flop. Ajayi made a huge call with

, which acted as a bluff catcher with some ace and straight outs as back up. Cheong picked up a 13.6M pot and Ajayi is now third in chips.

Michael Watson, one of Canada’s most decorated poker players, was eliminated in 4th position. The hand started with Geoffrey raising to 450K. Michael Watson had a really good hand, especially in a 4-way game, and placed a huge 3bet. He put in 1.8M out of his 7.1M stack. Geoffrey, after some tanking, announced all-in, covering Mike twofold. After a call, both players went to a showdown, while Joseph Cheong was watching with great interest:

Watson goes out in dramatic fashion. After hitting an unlikely non-spade jack to complete a straight, he was sent to the rail by a rivered flush. Great game Michael, and thank you for a great show! Prize: $180,000.

Players took a short break some 30 minutes ago, which means that the stream is now on a delayed break, showing highlights of levels 31 and 32, and there were no shortage of interesting hands! Here are the updated counts: 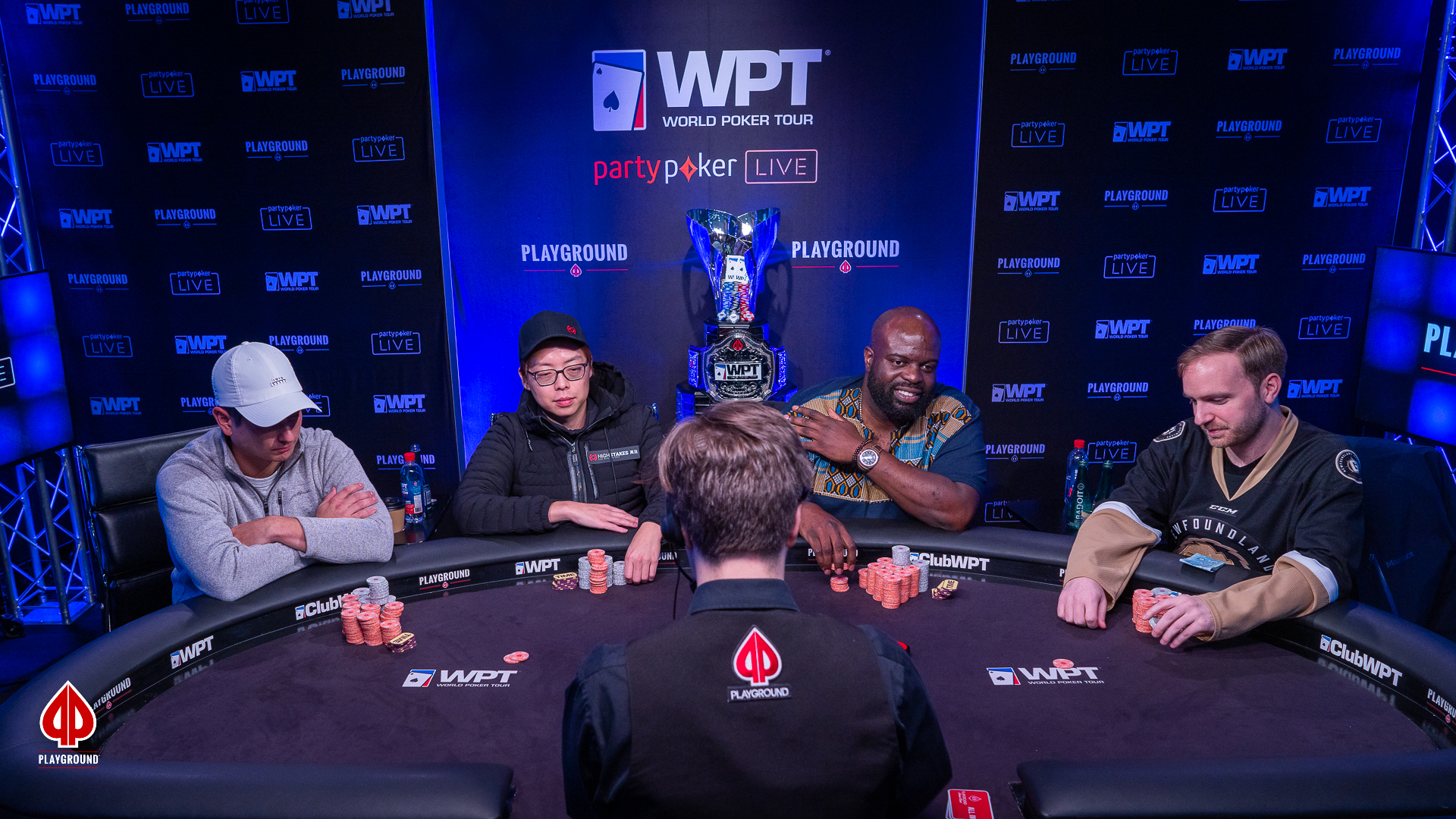 Kristen Bicknell was playing an amazing game today, gaining chips when needed with inspired play. Her last hand was a rough one, virtually impossible to get away from. She made it 350K to go from the under-the-gun position. Geoffrey Hum 3bet to 1.1M. Bicknell thought for a while and finally bumped it to 2.3M, sending Geoffrey into his own tank. Kristen was sitting on about 6M before the hand, so Geoffrey had a real decision here: put in in or play post-flop to try to extract as many chips as possible from his dangerous opponent. He went all-in and found a quick call:

Geoffrey picks up a huge pot, sending a very strong player to the rail at the same time. Kristen Bicknell walks in 5th with a $140,000 payout. Excellent run!

When Martin Jacobson picked up

from the under-the-gun position, he moved all-in with his remaining 1.5M. Adedapo Ajayi completed the bet with

. They went to the board:

Non of that was helping Jacobson, but the turn came with a lot of hope: the

! It really seemed like he was about to pull off the upset and stick around with a decent stack, but the river took that away from him:

Martin Jacobson had an amazing tournament. After finishing in the money in 14th position in the High Roller event, he takes 6th in the Main Event for $110,000. An amazing performance for an amazing player. Congratulations!

Play is underway on the WPT stream, and some pretty good hands were dealt already. Moments after the following chip count update, Adedapo Ajayi got himself a pair of ladies against Geoffrey Hum’s top pair top kicker.

A dangerous flop for Geoffrey, but the scare card

on the turn saved Geoffrey a lot of chips. He lost about 2M in that pot, which went to Adedapo – to be adjusted on this table:

The final table stream (open in another window to view the stream) just went live on the WPT YouTube channel. As a reminder, action is streamed with a 30-minute delay. Our blog will report events with the same delay to avoid spoilers. The Final table is unbelievably stacked with skill, so it should be an exciting one!

Pro commentary will be provided by Ari Engel, a strong player with $6,825,122 in lifetime earnings. His insights will surely be valuable. Enjoy the stream! 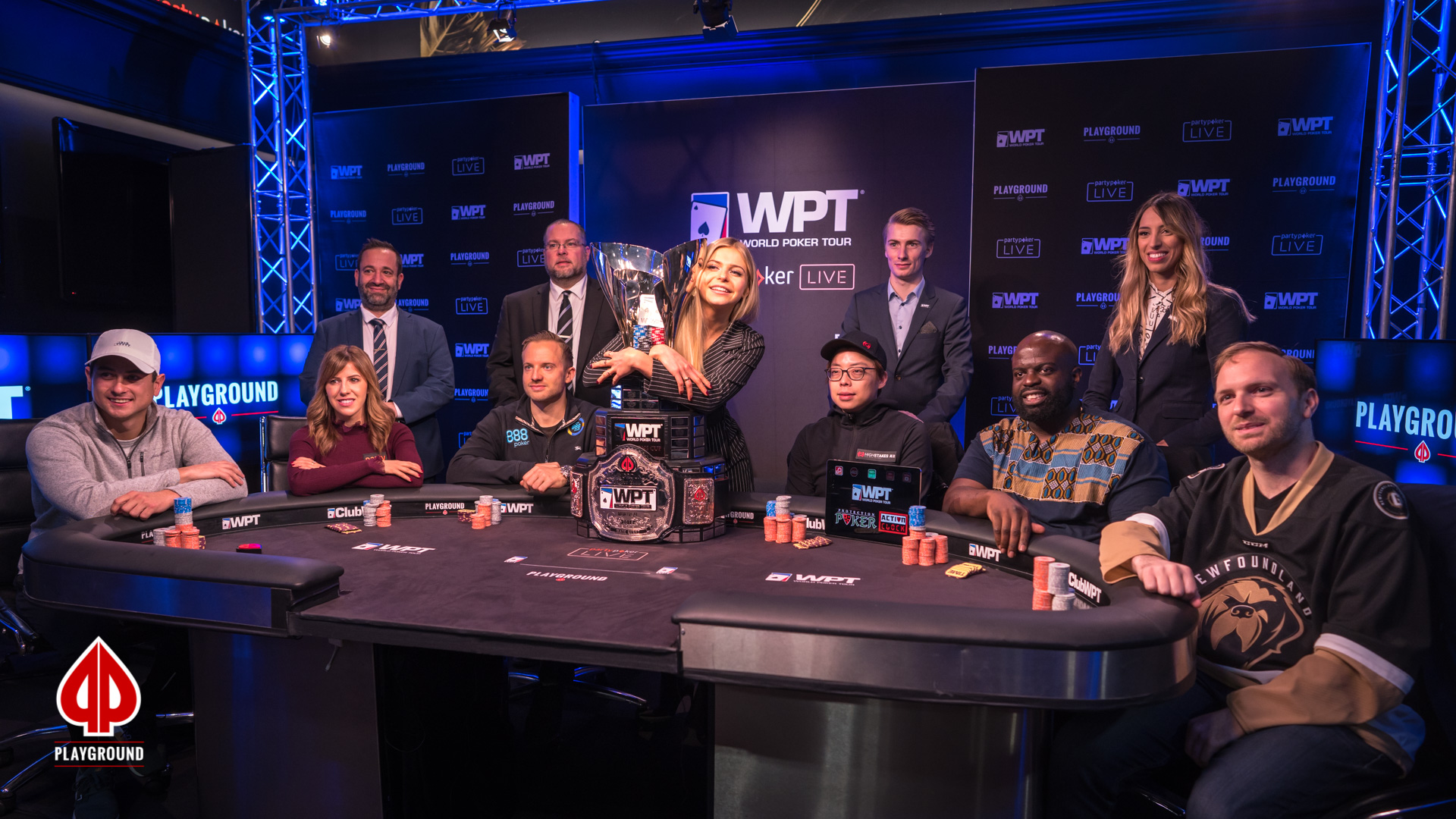 Our final 6 are getting ready to resume play on the streaming table for the conclusion of the WPT Montreal Main Event. The stream is located on WPT’s YouTube channel. Click the link to follow the action with a 30-minute delay (open in another window to view the stream).

Here are the counts at the restart:

Not an ace nor a single diamond was revealed on the board, and Minkin so missed the official WPT final table by one spot. She took $85,000 for her nice run. Congratulations Kelly!

Our remaining six will take a break while the stream is being prepared. They are now signing some release papers and will soon be set up with a microphone.

From now on, we will report events with a 30-minute delay to be synchronized with the stream. Our next post will announce the web address of the stream. Stay tuned!