The WPTDeepstacks started on Friday Nov. 1st and had three starting flights for this $1500 + $150 marquee event as part of the WPT Montreal. There was a $500,000 guaranteed prize pool and when the late registration period came to a close, 596 players had entered (including re-entries) which helped to swell the prize pool to $867,180. The top 85 finishers were in the money, with a min-cash in 85th position paying $3,000, and, the Event Champion’s first place prize being $151,120.

Some of the best names in the business showed up to play as the event attracted players from both near and far. Day 2 played out yesterday at 2:00pm when 128 players returned to play down to the final table. Once the final table was reached, play was paused so that the players could get some rest in order to come back and play Day 3 today, playing down to a winner.

The final table was made up of:

Once play began, Andrew Ostapchenko was the first casualty of the day, falling in eighth place for a $20,000 payday. George Grady was the next to go, exiting in seventh for $26,000. Gonzalez Hernan finished in sixth place for $34,000. Then came Ryan Yu, collecting $44,000 for his fifth place performance. Santiago Plante left the room in fourth place for $56,000. Patrick Quinn collected $72,980 for his third place performance.

When heads-up play started, Jack Salter had a massive lead over Alexander James Allison (71 BB to 19 BB). Play lasted for less than 20 minutes before the final hand of the tournament played out.

and was called by Allison who woke up with

, making a pair for Salter, and just like that, the WPTDeepstacks crowned a champion for Event #6 of the WPT Montreal, Jack Salter, taking home the winner’s trophy and the $151,220 up top prize money.

There have only been a few flops seen since the elimination of Santiago Plante as most hands have been won pre-flop.

Then came this crucial hand. Action opened with an open shove by Jack Salter in the small blind and after giving it some thought, Patrick Quinn made the call in the big blind.

Salter was way ahead and Quinn needed some help. The flop came

. The turn was the

river were also bricks for Quinn who went to pick up his payout slip for $72,980 after having played a great game. 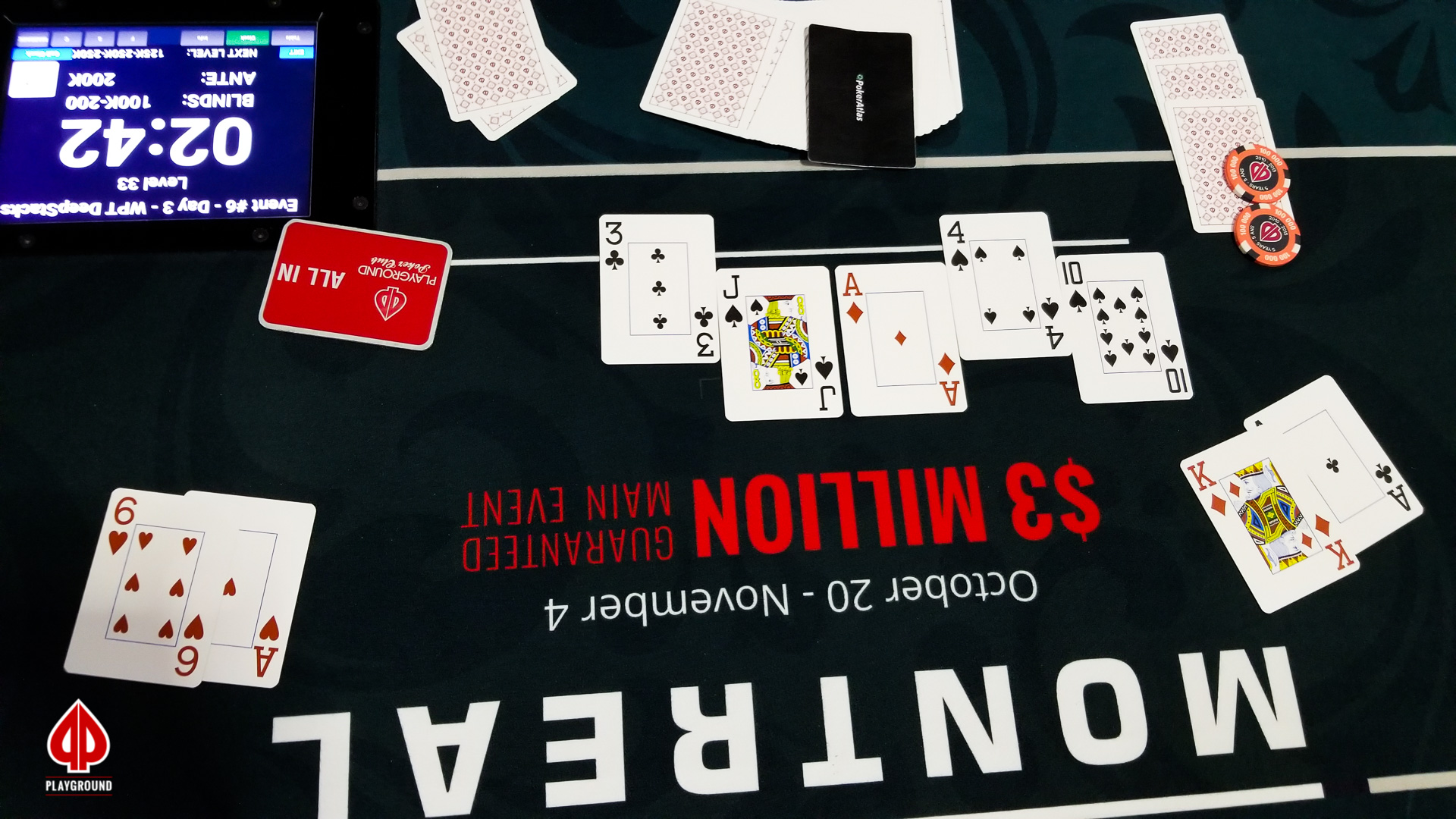 The two players have gone on break for 15 minutes.

Just after the players returned from their break, action folded to Santiago Plante who moved all in from the cutoff position. When it was Alexander James Allison’s turn to act in the small blind, he also went all in (over). Jack Salter folded his big blind and the cards were opened:

Plante was behind and Allison also had both of his flush outs. The board ran out

, and, Plante exits the room in fourth place after having played great, taking home $56,000 for his three days of poker.

Ryan Yu has just been eliminated at the hands of Alexander Allison.

Yu controlled one of the larger stacks in play for most of Day 2, but he had a tough run at the final table. The cards simply would not cooperate, as Yu was forced to fold in several spots after committing chips to the pot. As his stack dwindled and the blinds increased, he was eventually forced to get it in, and Alexander Allison benefited by capturing his chips and sending Yu to the rail.

Yu will receive a $44,000 payout for his fifth place finish.

Gonzalez Hernan’s run the WPTDeepStacks has ended in heartbreaking fashion. He flopped the nuts and lost the hand, sending him to the rail in sixth place.

Hernan got it in good against Jack Salter on a

flop. He played in flow, checking to the Salter, who was the aggressor. Salter made a hefty flop bet, only to be met with a check-raise all in from Hernan, which Salter quickly called. Hands were tabled to show that Hernan hit a (nearly) perfect flop with his

, but he was up against

. Salter’s flush draw came in on the

river a mere formality. Hernan will receive a payout of $34,000 for his sixth place finish.

Play has just resumed in level 30, following the first break of the day.

After an hour of play, the balance of power has shifted. Santiago Plante reclaimed the chip lead after taking down a big three-way pot against Patrick Quinn and Ryan Yu, the two players who had the largest stacks going in to the final table. Plante is now playing a stack of 46 big blinds. Jack Salter quietly improved his standing by taking down several hands without showdown to now sit second in chips, with 43 big blinds at his disposal.

It did not take long for the first elimination at the final table.

Within the first orbit of play, Andrew Ostapchenko had his run ended and made his way to collect a payout of $20,000

Shortly after Ostapchenko’s ouster, George Grady followed suit. Grady, who started the day as the short stack at the table, was sent packing by Alexander Allison in a battle of the blinds. Grady will collect $26,000 for his final table appearance.

The WPTDeepStacks is set to play down to winner this afternoon. Yesterday’s Day 2 reduced the qualifying field of 128 players down to the eight finalists in just over 11 hours of play. The final table was slated to begin with nine players, but a two eliminations on concurrent hands sent both Senthuran Vijayaratnam and Michael Dentale to the rail before play concluded. Although certainly disappointed to fall short of the final table, both players can take comfort in their five-figure payouts. Vijayaratnam took home $13,000 for his tenth place finish, while Dentale profited from a pay jump and received $16,000 for finishing in ninth.

Play has just resumed at the final table, with Patrick Quinn and Ryan Yu in a dead heat for the chip lead.

What started with 596 entries from three starting flights is now down to only eight players. Day 2 play reduced the qualifying players from 128 to 8 in 11 hours of play, and now the stage is set to crown a champion. The stakes are high at the final table of the WPTDeepStacks, as there will be huge pay jumps with each elimination, setting up an exciting afternoon of action.

When play resumes at 1:00pm, the players will be seated according to the following table.

Day 2 of the WPTDeepStacks saw 128 players return to play down to the final table. The Day 2 qualifiers got off to a fast start this afternoon, which quickly brought the field to the money bubble and hand-for-hand play. After nearly a full level of play on the bubble, the top 85 were brought into the money shortly after 5:00pm. From there, with all the remaining players securing the payout of at least $3,000, the action picked up drastically and produced over 30 eliminations in the next hour of play. Once the stacks got deeper and the pay jumps got bigger, play returned to a slow tournament grind.

Ryan Yu and Santiago Plante controlled the largest stacks in play for almost the entirety of play on Day 2, each taking turns as the chip leader. But it was Patrick Quinn who will lead the field going into Day 3. Quinn kept his head above water with a stack that hovered around the chip average for most of the flight before the cards turned in his favour in the late stages of play and helped him run up an impressive stack of 4,190,000.

All the remaining players are assured a five-figure payout from this event. But only one player will walk away with the victory, the $151,220 top prize and the bragging rights that come with being the WPTDeepStacks champion. Play will resume tomorrow at 1:00pm

The following table contains the chip counts for the eight finalists.

Play has just resumed in level 27, with only 14 players remaining.

The chip lead has changed hands several times recently, as Santiago Plante and Ryan Yu take turns leading the field. Now that the big blind costs more than a starting stack for this event, things are changing quickly.

An average stack now hovers in the neighbourhood of 25 big blinds, further reducing the margin for error.