The final installment of the Playground Women’s Series 2019 has come to an end as thirty women battled it out for the grand prize. The women in today’s event previously qualified in at least one of the four prior tournaments part of the Women’s Series . The top 5 finishers in each open tournament received a direct entry into the Finals and the remaining spots were filled by the Top 10 point earners on the Leaderboard, once the tournaments were complete. $10 was withheld from each buy-in to make up the final prize pool of $2,790.

The women started the day in great spirits as many of them toasted mimosas and exchanged friendly banter. Once it was announced that only the top three would be in the money, play slowed considerably as many were cautious with their chips. The final table was reached after eleven levels of play and the remaining women set their sights on the prize.

The final three women paused play to make an ICM deal, which awarded Christine Park with $1,008, Brigitte Korak with $938, and Natalia Nogina $704. The winner would be given an additional $140 atop of their earnings. Nogina was eliminated in third to walk away with $704.

Park and Korak went back and forth for a while until both players connected with the right flop. Following Park’s check on the flop, Korak made a bet which was met by a hefty check-raise from Park, and the two players were quickly all in.

Park was able to win the hand and was crowned tournament champion with her aces-up. She was awarded $1,008 plus the additional $140 for a total of $1,148. Korak finished in second to walk away with $938. 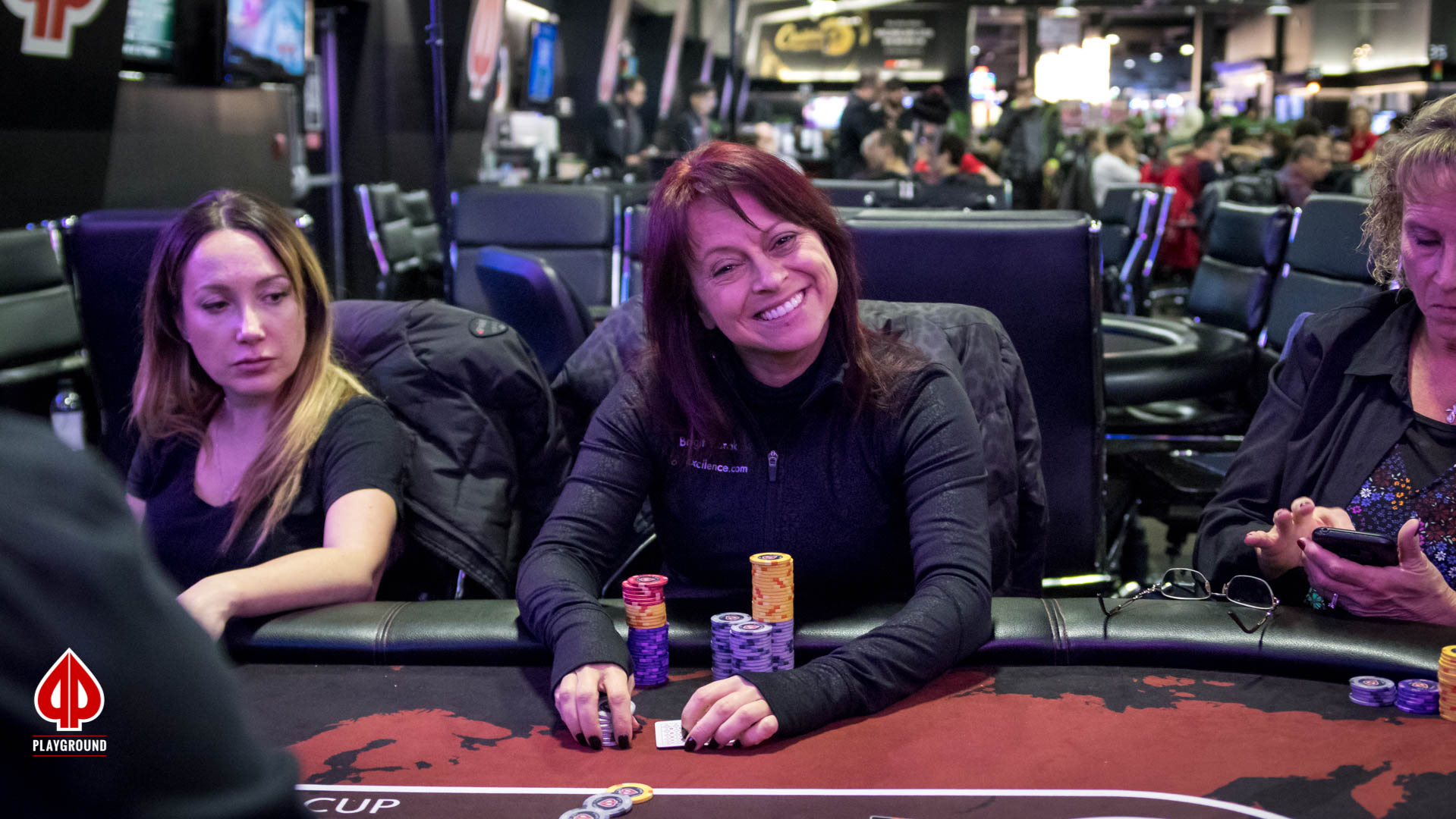 The final three women have reached the money. Karen Greenwood and Denise Lepine were both eliminated after going all in against Brigitte Korak. Greenwood finished in fifth and Lepine in fourth.

Lepine shoved her final hand pre-flop with a

, prompting Korak to call with a

which granted Korak the win with a pair of kings.

Brigitte Korak is joined by Christine Park and Natalia Nogina to make up the top three.

The field is just two spots away from being in the money as five women remain at the final table. Sylviane Cassini was eliminated in seventh position and Brigitte Metivier finished sixth.

Metivier went all in against the current leader Christine Park. Metivier was dealt

while Park had an

. The turn and the river gave Metivier two pairs but Park was able to walk away victorious with a diamond flush.

The table is shrinking and the women are getting closer to being in the money. Claire Briere has been eliminated by Natalia Nogina after both players went all in pre-flop.

Nogina jumped for joy as the board gave her a full house which in turn eliminated Briere to finish in eighth position.

Eight women remain at the final table as play enters level thirteen. Christine Park eliminated Julie Poliquin in tenth as well as Danielle Bracy who finished in ninth. Bracy went all in with pocket tens but Park was able to narrowly beat her with a pair of jacks.

The final table has been reached! The ten remaining women have made it to the final table to compete for the grand prize of $1,400. Only the top three will be in the money so the pressure is on.

Here is a look at the seating chart for the final table.

Play has resumed after the second break of the day and the tension is high. Thirteen players remain but ten will make up the final table and only three will make it in the money. Brigitte Metivier remains in first position but her lead has narrowed as Christine Park builds her stack. Metivier has 97,500 in chips which is worth 122 big blinds, while Park follows closely with 96,000 in chips, worth 120 big blinds.

Play has slowed as the sixteen remaining women enter level seven. Christine Park just won big and doubled her stack after going all in against Barbara Phillips. The flop rolled out an

which prompted Park to call all in. Phillips thought for a moment before calling Park as both women hoped for the best.

The turn and the river revealed a

which did nothing for either player but Phillips was eliminated as her king couldn’t save her against Park’s pocket queens. Park survived her potential elimination while doubling her stack.

Play has entered level five as the first break of the day has come to a close.  The average stack is now just over 31,000 which is good for about 103 big blinds. Brigitte Metivier has taken a huge lead with a stack currently worth 366 big blinds. The field is narrowing slowly as 24 women remain in contention for the grand prize.

The Women’s Series final event is off to a great start with lots of laughs and mimosas. Only two players have been eliminated as play enters level three.

Here is a look at some early action.

The top three finishers in the Women’s Series final will be in the money. The prize pool for today’s event has reached a grand total of $2,790.

Welcome to the finale of the Playground Women’s Series 2019! Thirty women will battle it out in the fifth and final installment of the series.  The players competing today qualified from being in the top 5 finishers in the open tournaments or from being one of the Top 10 point earners on the Leaderboard. Click here to find the seating draw as well as the Leaderboard going into today’s final

The women will begin with 25,000 in chips and play ten handed through 30-minute blind levels until just ten remain to make up the final table. The prize pool has reached a total of $2,790, making the grand prize $1,400.

Good luck to all competitors!