Playground, in association with the Women’s Poker Association, presented the Playground Women’s Series, a poker series exclusively for women! Players accumulated points through four open tournaments for a $5,000 guaranteed prize pool in each of the open events held monthly, while trying to earn a seat in the final which will play out tomorrow, Sunday January 19 at 12 noon.

The series started back in October and there were previously three open events with today marking the fourth and final event of the series. The top five finishers from each of the open events have already secured a seat into tomorrow’s final, and, the top 20% of the field in each open event also earned tournament leaderboard points. The top 10 point earners from all four events also receive an entry into the grand final.

Today’s event attracted a total of 56 entries (including five re-entries) which allowed the prize pool to swell to $7,588, with the top seven finishers being paid. There was a nice mix of players and although the atmosphere was very friendly, make no mistake; the women were here to play some serious poker!

Golnaz Aghabeigi took the early lead but in the end, she couldn’t hang onto her stack and she fell short of the final table. Danielle Bracy was on the leaderboard all day long and as play went deep she found herself on top of the pack. Christine Park, a regular here at Playground tournaments and cash games also started putting together a very healthy stack. Lisa Powell was the first to bustout early in the day but after re-entering she amassed a lot of chips and was a serious contender. Erica F., a solid player and another Playground regular was under the radar for most of the day but by the third break, she was starting to become a force to be reckoned with.

The pace was faster today then it was in the three previous events and by around 8:00pm, the final table was formed. With only the top seven players scheduled to be in the money, once play was eight-handed, a bubble deal was reached paying the eight place finisher (and Event #1 Champion), Crystal Abouhanna, $175. Brigitte Korak, a well known and well liked local player, was the unfortunate recipient of a cooler when she put all of her chips in holding pocket queens and found herself in a three-way pot against ace-queen and Erica F.’s pocket nines. Korak had no chance when Erica flopped quad nines, sending Korak to the rail in seventh place for $275. Next to go was Elizabeth Beattie who finished in sixth place, collecting $405 for her efforts today. Joy Benn was the fifth place finisher, having a $575 payday.

When play became four-handed the play was super deep with about a 60 big blind average, so the players looked at the ICM numbers and decided to go ahead and do a deal.  Decent money was locked up for each of them while they would still be playing down to a winner for an additional $300 along with the champion trophy and associated bragging rights. The ICM deal was as follows:

Once the deal was made Christine Park was the next to hit the rail, collecting $1,425 from the ICM chop. After Park exited Lisa Powell was eliminated in third for $1,140. When heads up play began between Erica and Danielle Bracy, Erica had quite a substantial chip lead but Bracy was still in contention. Finally Bracy picked up pocket nines and moved her stack in to the middle, and found a call by Erica holding queen-ten. The window card was a ten followed by a queen, giving Erica two pair, and Bracy was drawing to a nine or a possible running straight. The turn and river were bricks for Bracy, and just like that, Event #4 of the Playground Women’s Series crowned a champion, Erica F., collecting $2,280 along with the champion trophy. 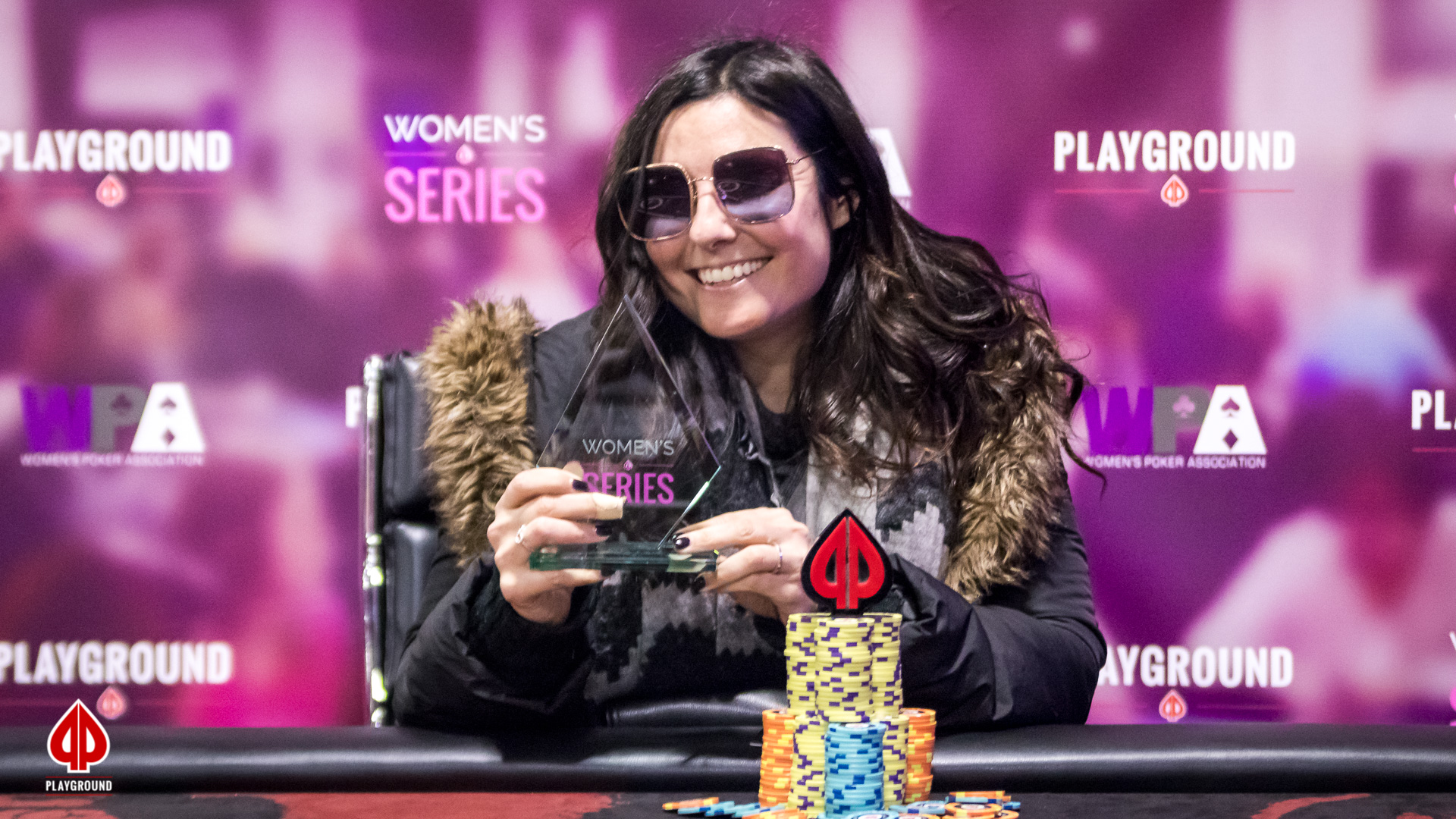 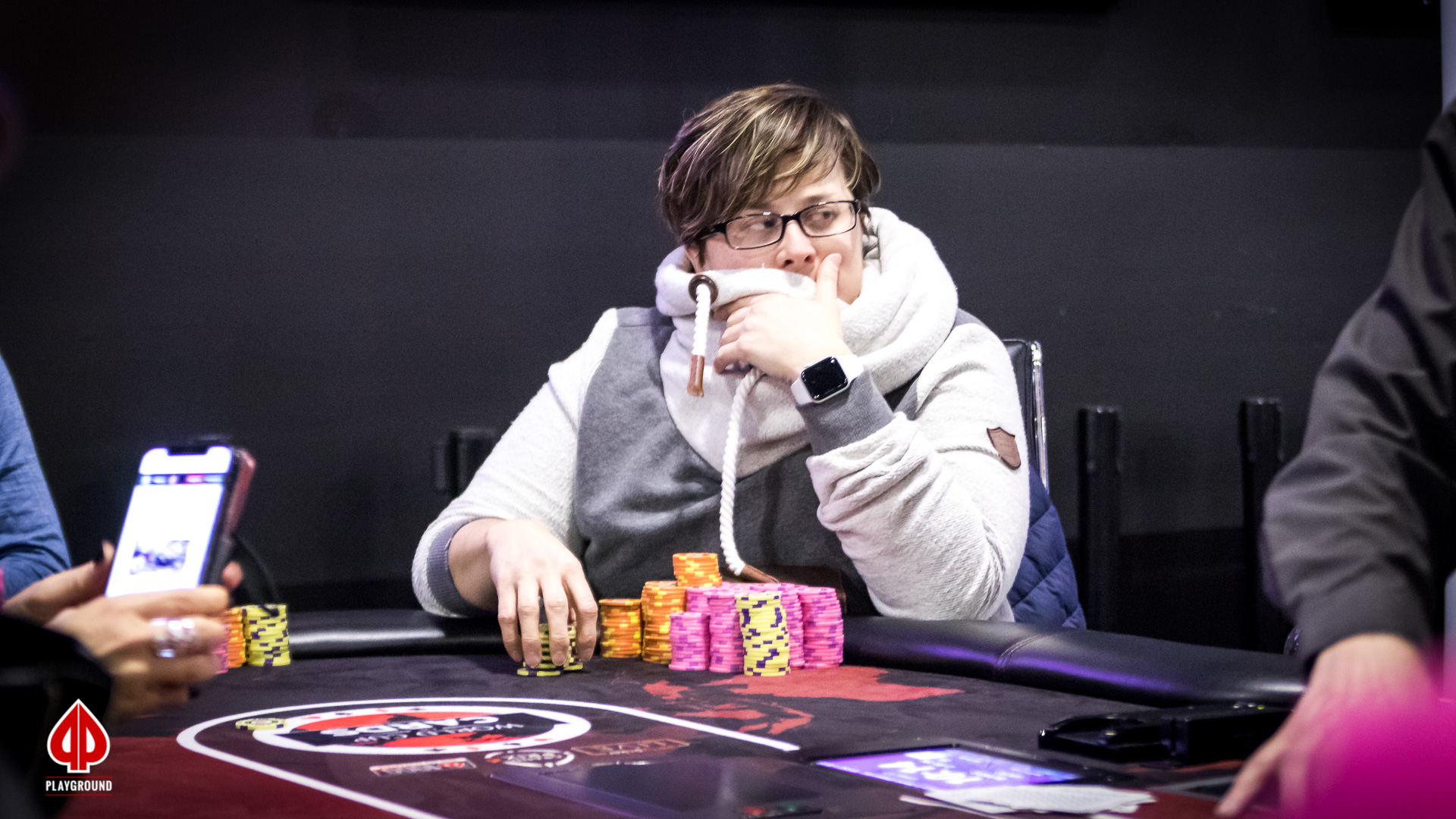 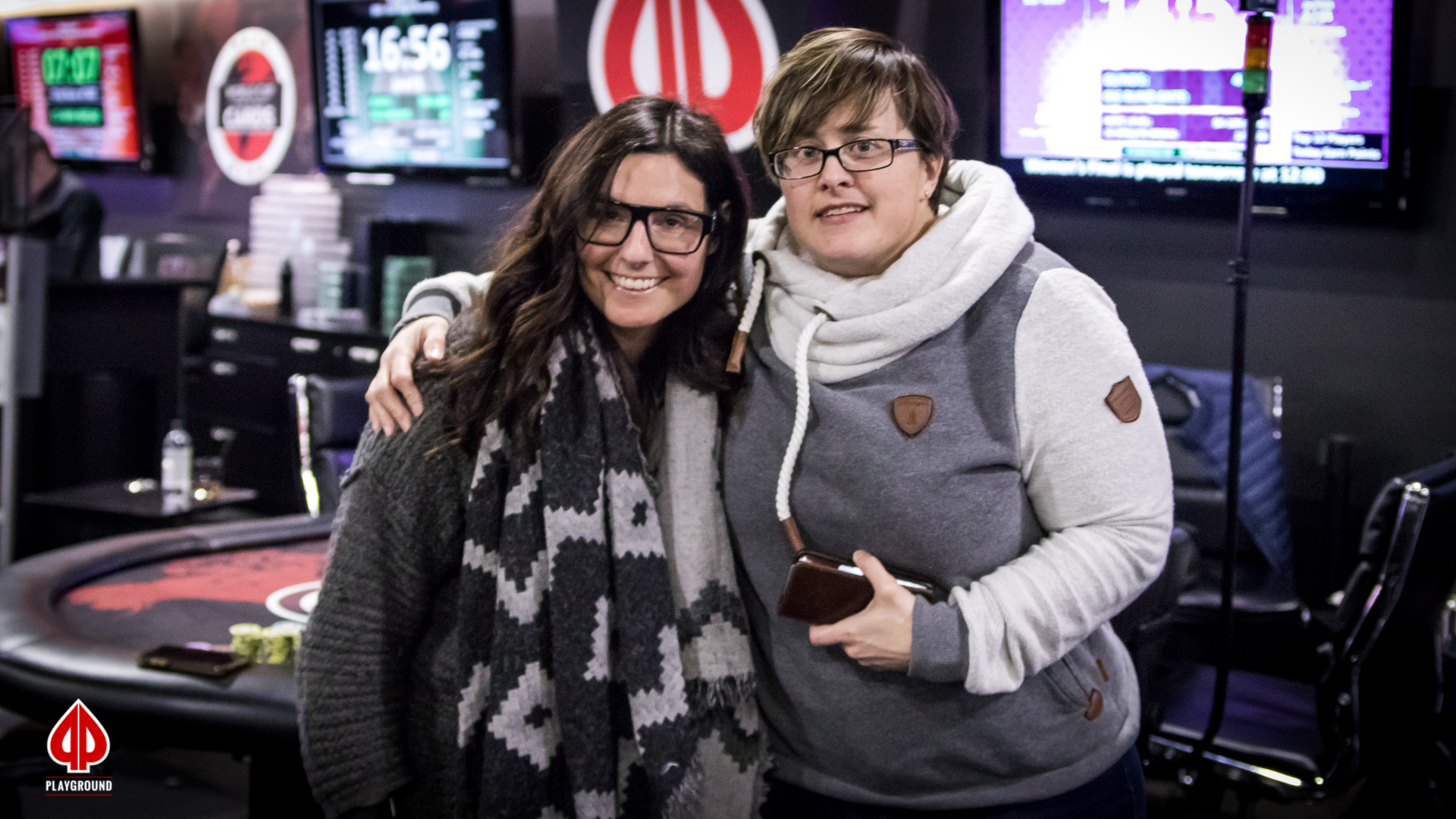 Here are the top 30 finishers on the tournament leaderboard who have qualified for the championship final taking place on Sunday January 19 at 12 noon:

Erica F. continues on a run-good heater on this final table and has just eliminated Lisa Powell in third place. Lisa was delighted with her play and her result as she was the first player to bustout early in the day but she then decided to fire a second bullet which was apparently a good investment. Well played. 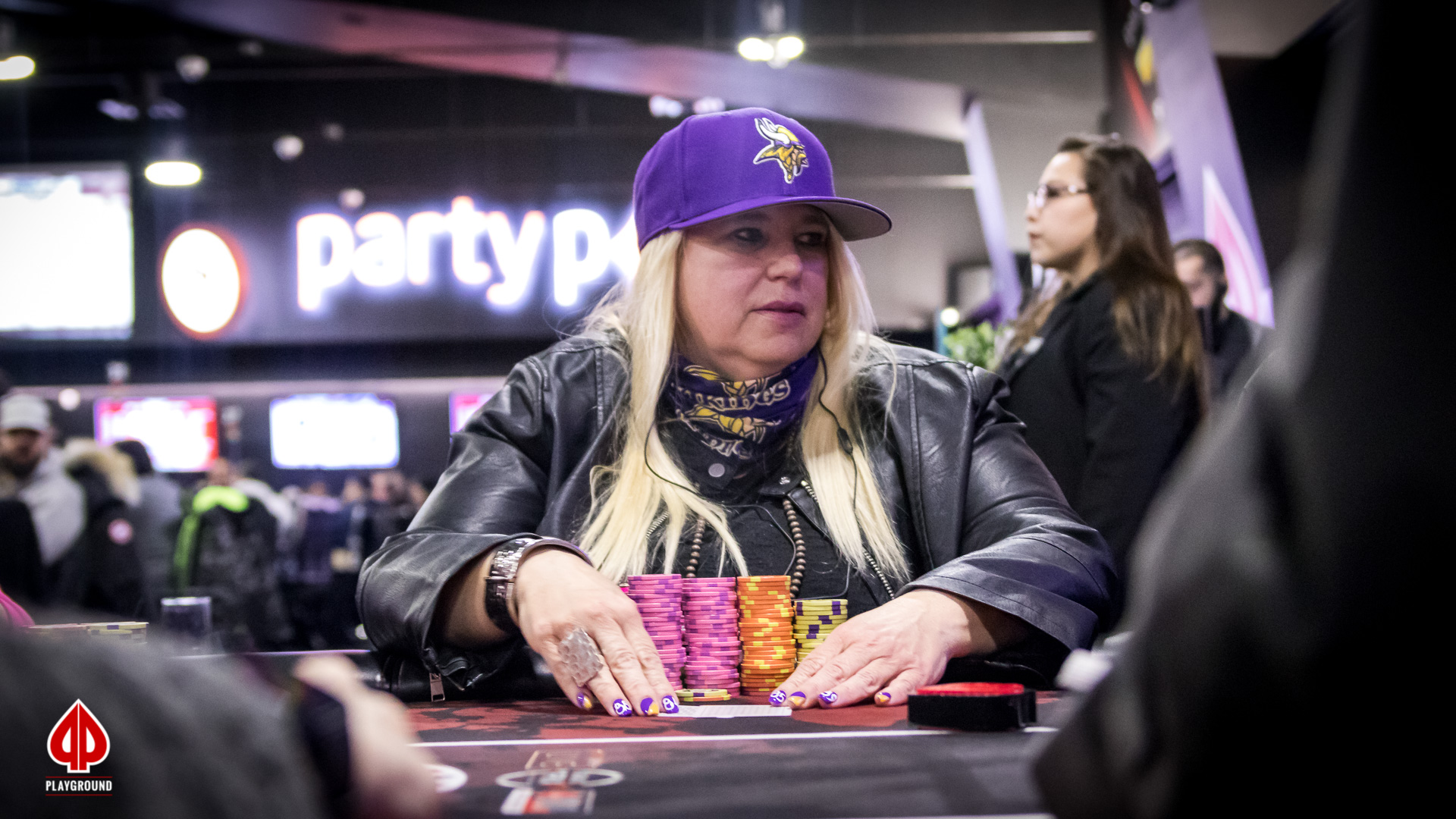 Once play went four-handed the players decided to look at the ICM numbers and see if they could reach a deal. The atmosphere was cordial and although Erica F. was holding the lion’s share of the chips in play, she was more than happy to agree to a deal and then just play down to a winner. As per Playground policy during events, 5% of the remaining prize pool would be removed and the players would then play down to a winner.

The numbers worked out as follows:

The players agreed to the deal and within a few hands Christine park was eliminated in fourth place. 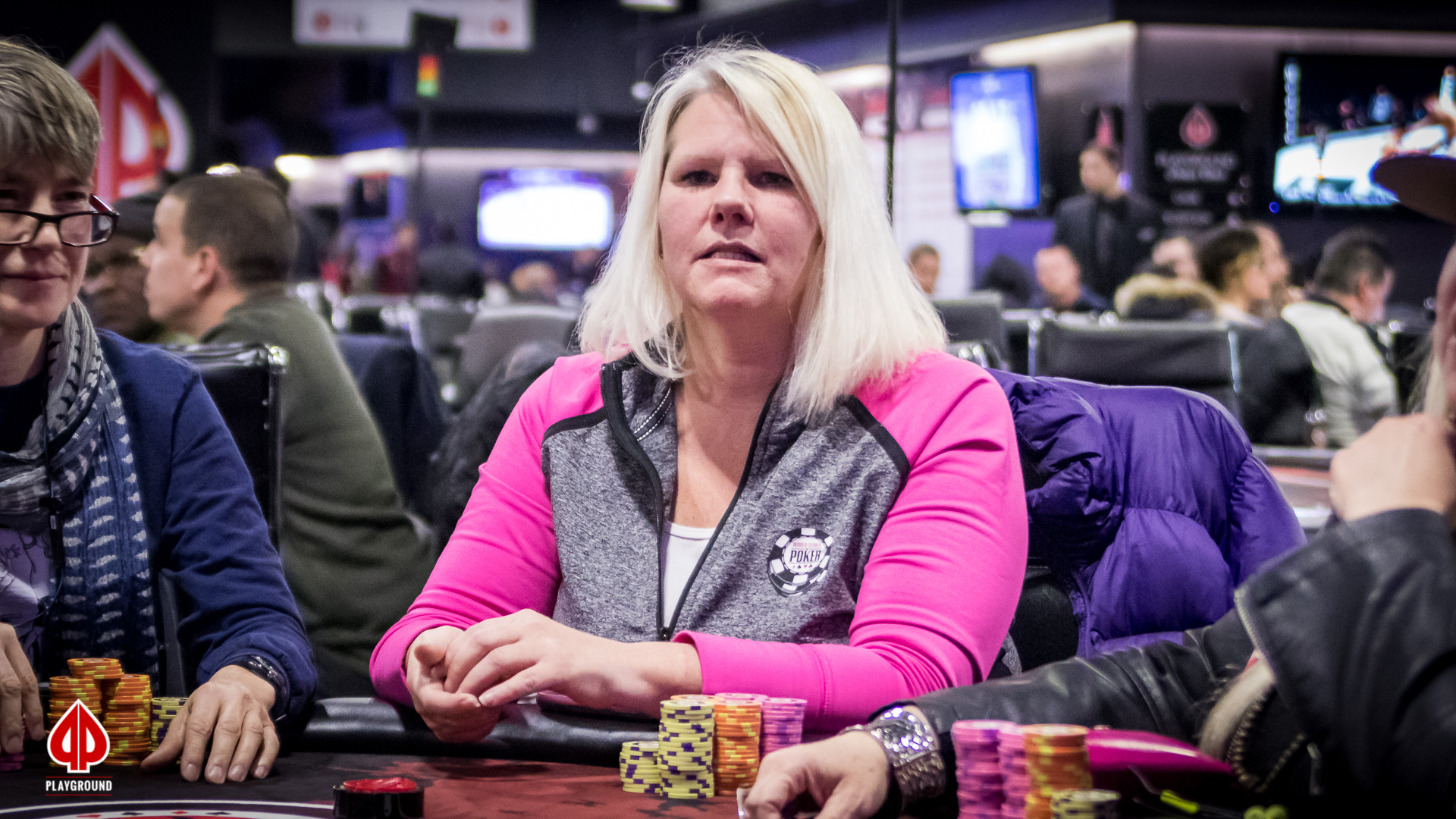 Eric F. has been on a heater on the final table and now has over 60% of all chips in play. She just eliminated Joy Benn in fifth place.

Play has been fast and furious and two more players have been sent to the rail. 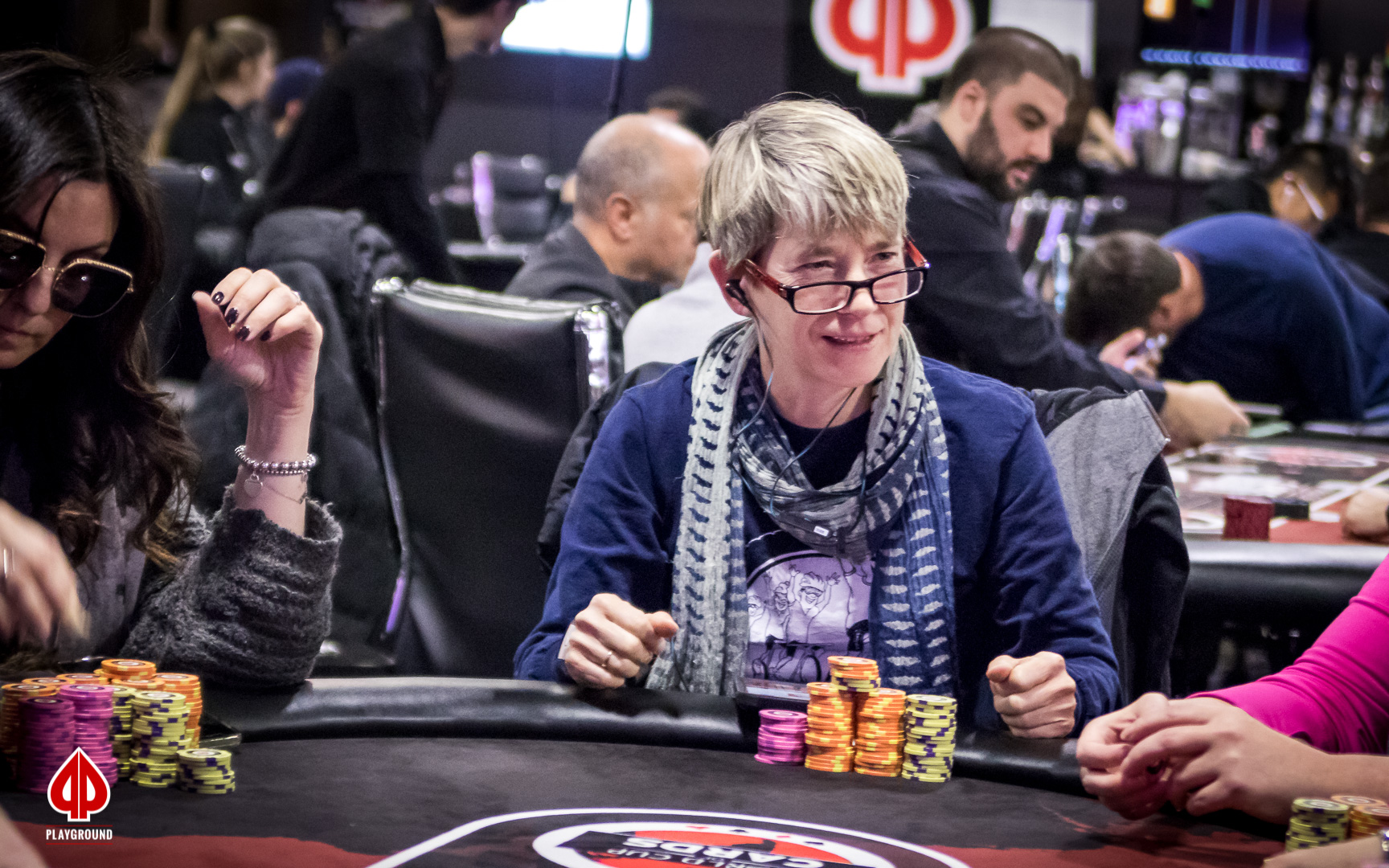 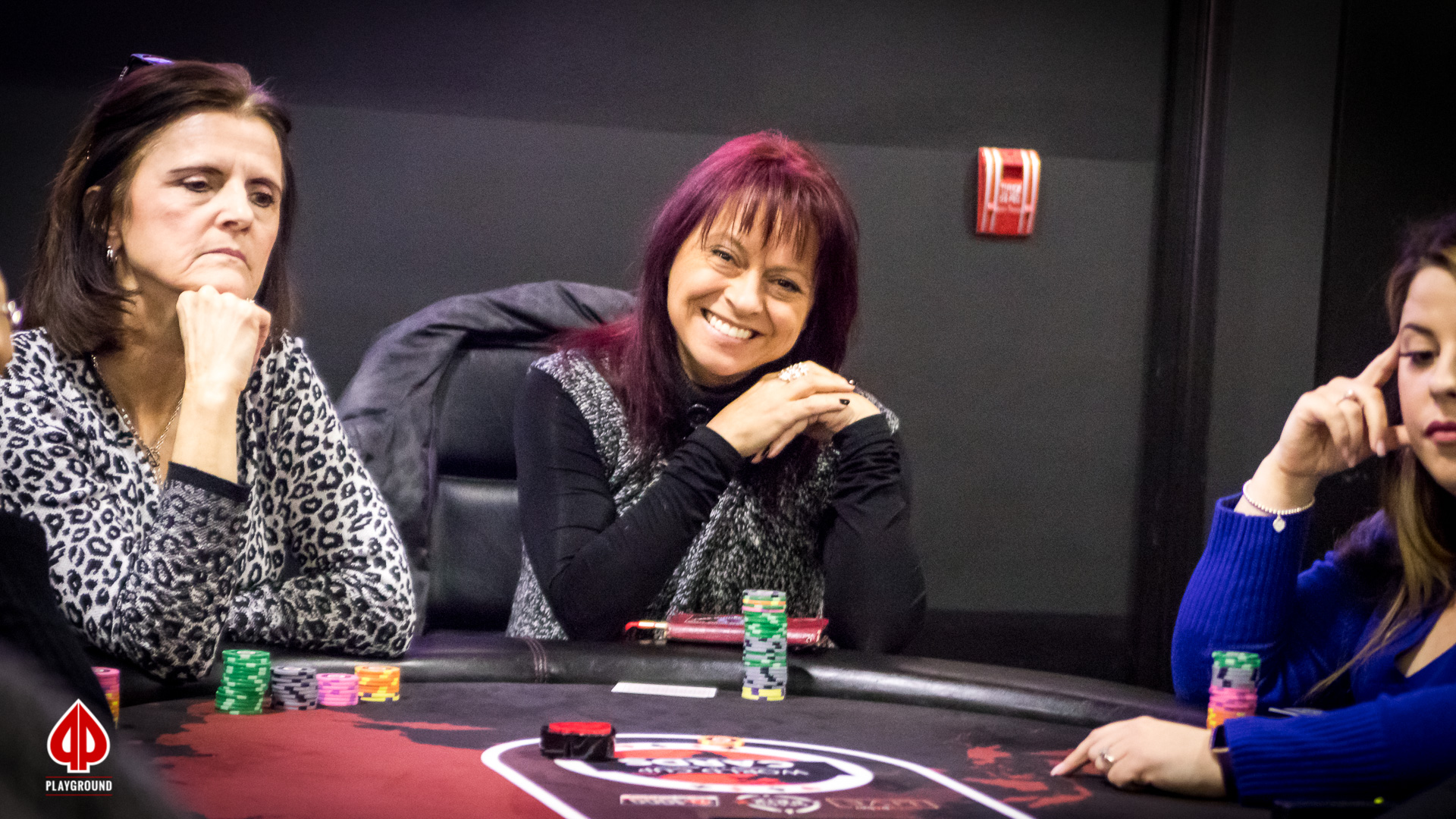 With the top seven finishers being in the money, once Annie Pelletier exited in tenth and Lorraine Beaupre Lebire exited in ninth, the players agreed to remove $25 from each payout to pay the eighth place finisher $175 for busting out on the bubble. 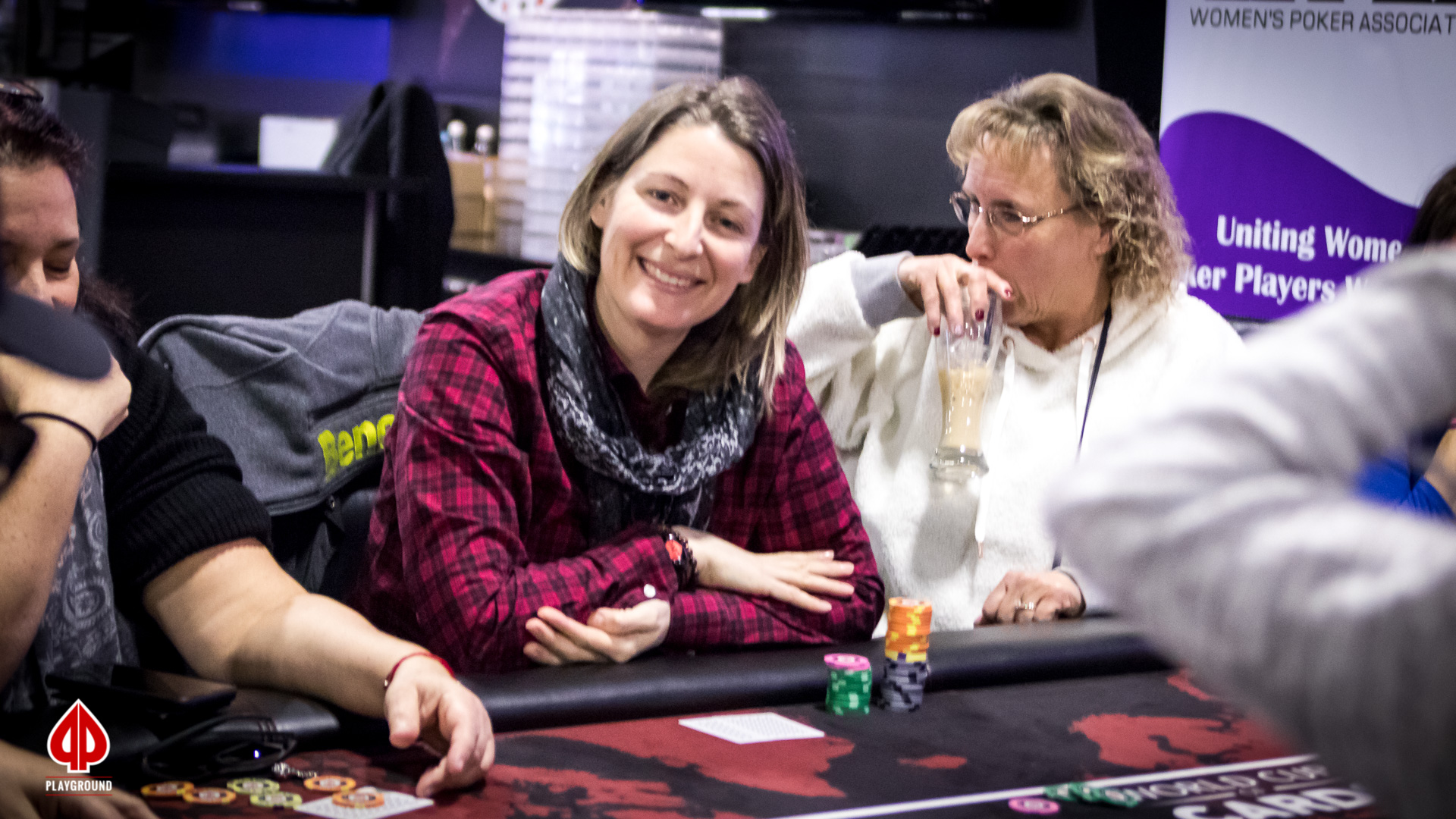 Where as it took close to midnight to form the final table in the first three events of this series, today’s Event #4 had a whirlwind of bustouts over the last hour to bring the tournament to the final table. The top seven players will be in the money, and although there was a brief discussion about a possible deal being made before play commenced, the players decided to just start the play and to see where the chips fall. 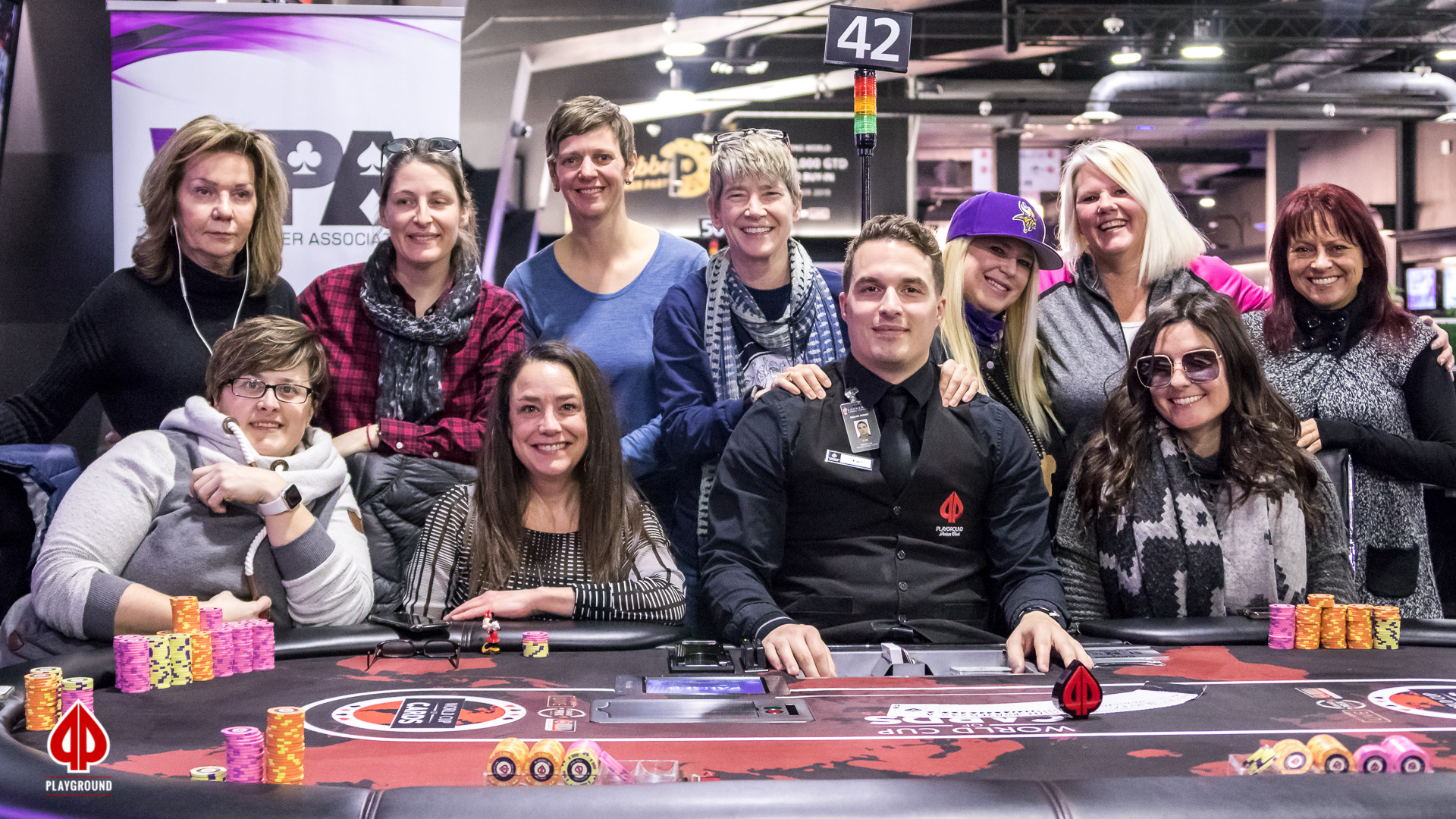 With 17 players left in contention and an average stack at 83,200 chips (28 big blinds), Christine Park has jumped to the top with the only stack over 200K; she is currently sitting on 206,000 chips, good for 69 big blinds. Danielle Bracy follows in second.

A table change can often make or break one’s tournament life. And sometimes you think that you are in a great spot but the poker gods may have other plans for you.

As the tournament moved to two tables, action was opened by Francine Baillargeon and on her direct left, Catherine St-Pierre was delighted to look down at a pair of kings and she moved all in. Baillargeon made the call with ace-queen and it just wasn’t meant to be for St-Pierre as the dealer put out an ace on the flop.

Many players call pocket kings “ace magnets” as it often seems that an ace will come when you have those cowboys. It was an unfortunate turn of events for St-Pierre, who took the beat with grace as she wished all of the other players good luck. What appeared like a magical table change for her ended up costing her the tournament.

With just two tables and 20 players left in action pressure is starting to build on the short stacks and the tournament is now seeing a lot of all in moves. Brigitte Korak just tripled from 13,000 to just over 40,000 when her pocket eights held against ace-three and king-queen.

On table 46, action folded to Christine Park seated in the cutoff position who raised it up from 2,000 to 6,000, finding a call from Cindy Leclerc on the button. When it was Lorraine Beaupre Lebire’s turn to act in the small blind, she moved all in for about 19,000. Park snap-called and Leclerc moved out of the way.

giving Park a gutshot straight draw along with her two overcards, but the

river did not give her any assistance and Beaupre Lebire picks up a badly needed double up with her queens full of threes.

Danielle Bracy has been playing hands and winning pots. With the average stack now sitting at just over 48,000 chips (41 big blinds), Bracy has moved into the lead with a commanding stack of 159,100 chips, good for 133 big blinds, more than three times the average stack.

Here is the newest leaderboard:

With the blinds now at 400/800, the tournament is down to four tables with 37 players still left in the running. The top seven players today will be in the money and the top 12 will collect leaderboard points to qualify into tomorrow’s final. 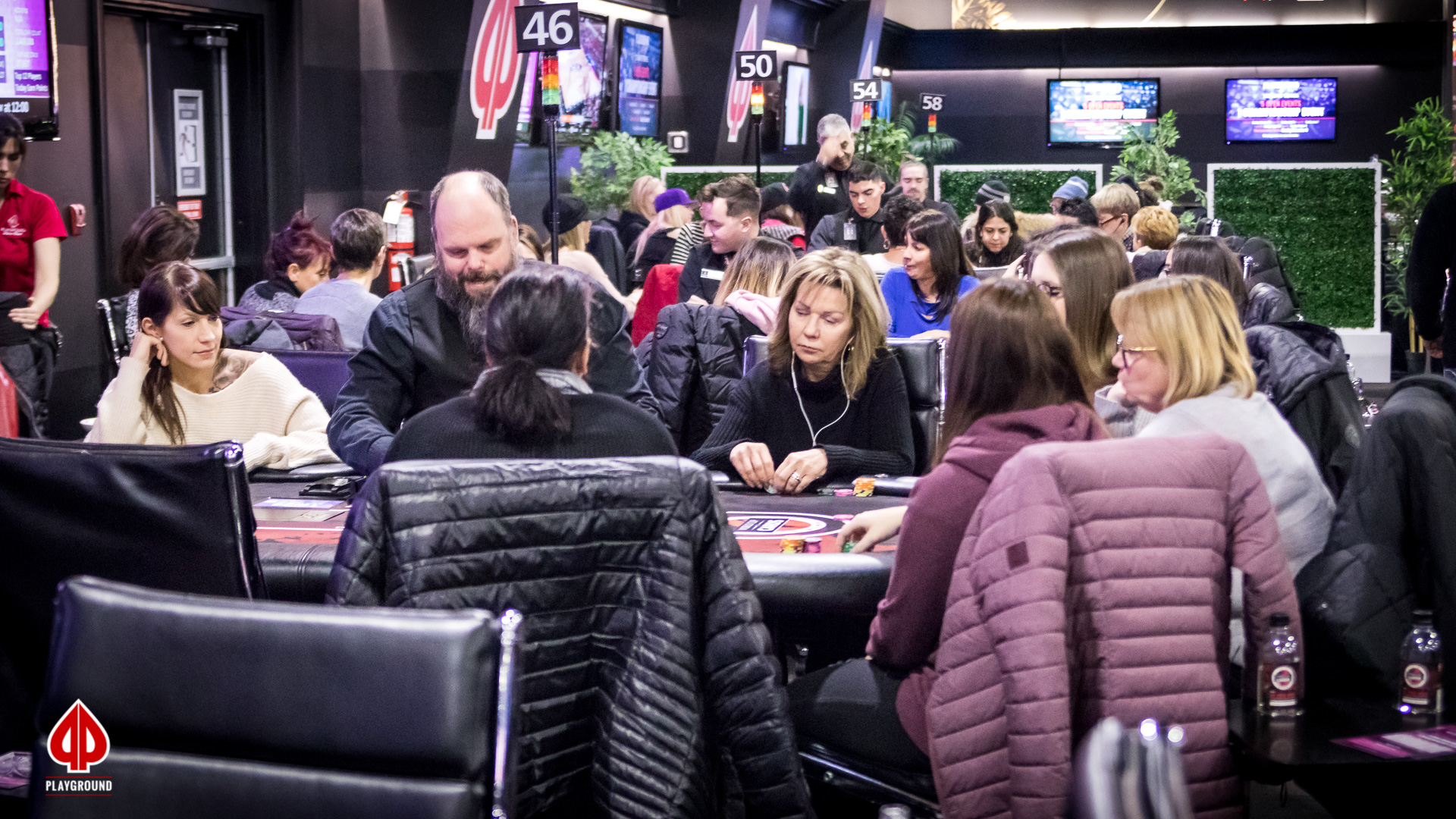