The third installment of the Playground Women’s Series, Event #3, started at noon and attracted a total of 62 entries. The large turnout pushed today’s prize pool to $8,401.

The atmosphere was pleasant while the players enjoyed some really good poker action as they battled to make it to the final table. After the blind levels increased to 30 minutes in length, patience was the word of the day as players waited to find the best possible spots before getting their chips into the middle.

As the final table bubble approached, it took close to one full hour before the tournament saw Helen Bechard exit in 11th place. As soon as the players were seated on the final table they agreed to make a deal to pay the ninth and tenth spots, so that all players would be in the money.

One by one the eliminations took place, until finally it became a heads-up battle between two experienced players: Cynthia Paquette (who used to be a Playground blogger and a dealer) and Sylviane Cassini. Cassini had one of the top stacks in play for most of the later levels of the tournament and Paquette caught up to her as the final table played out, and then at one point took the lead. The two players decided to make an ICM deal heads-up and since they were close to being even stacked, Paquette would receive $1,950 while Cassini would get $1,935, with $206 remaining in the prize pool for the eventual winner.

Paquette lost some ground early on but she is a fighter who refused to give up. She was able to run good and doubled up in a few key spots that all of the sudden propelled her into the chip lead.

On the final hand of play, both players put their chips in, with Paquette holding

. As fate would have it, not only was Paquette ahead of Cassini but when the flop came down

, Paquette just smiled at her trip kings while she whispered “wow.”  The

on the turn boated her up and the

on the river was of course of no consequence, and just like that, Event #3 of the Playground Women’s Series crowned a champion, Cynthia Paquette.

Event #3 Champion: Cynthia Paquette, $2,156 (plus entry to the Champion’s final) 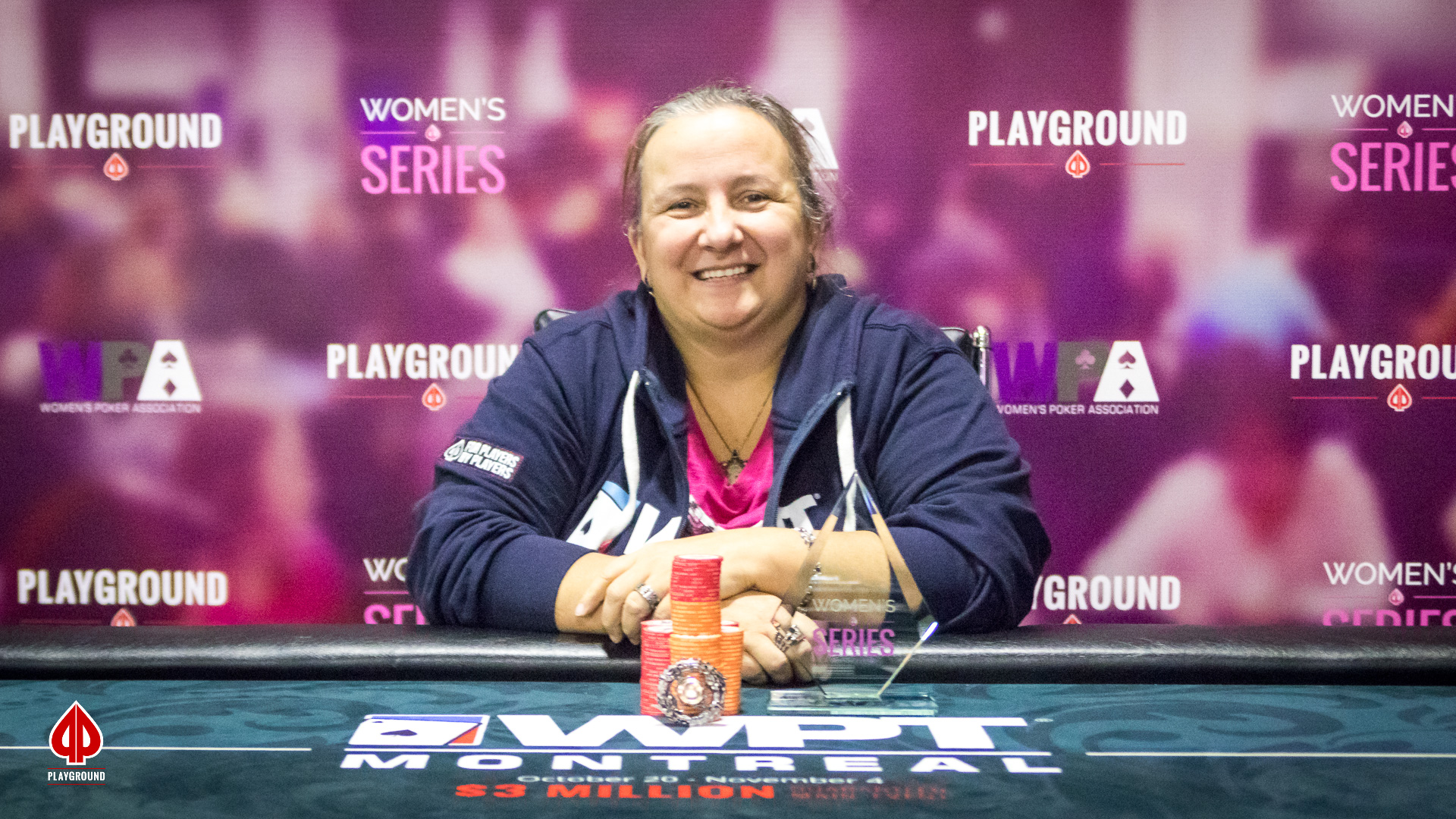 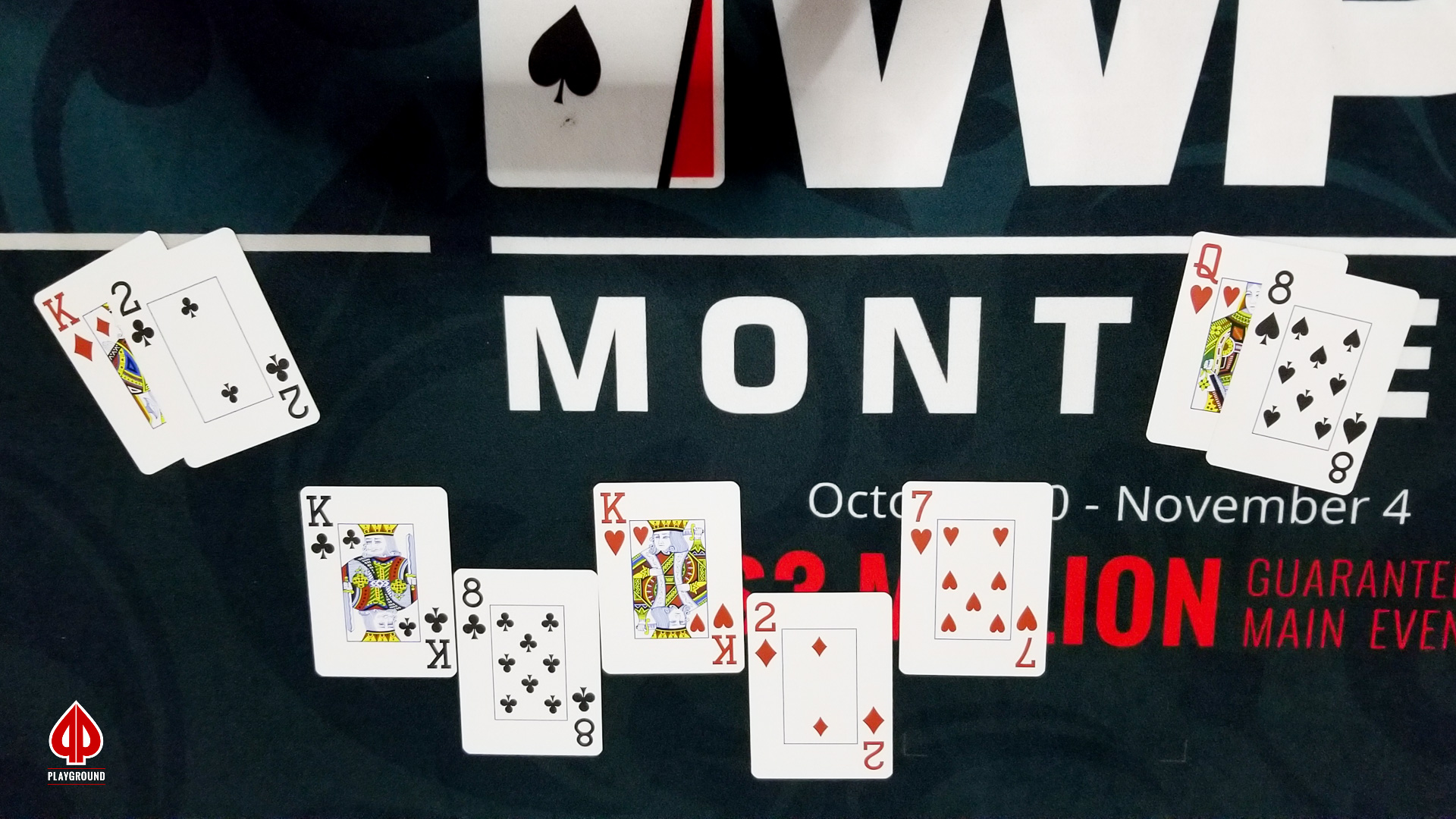 Second place: Sylviane Cassini, $1,935 (plus entry to the Champion’s final): 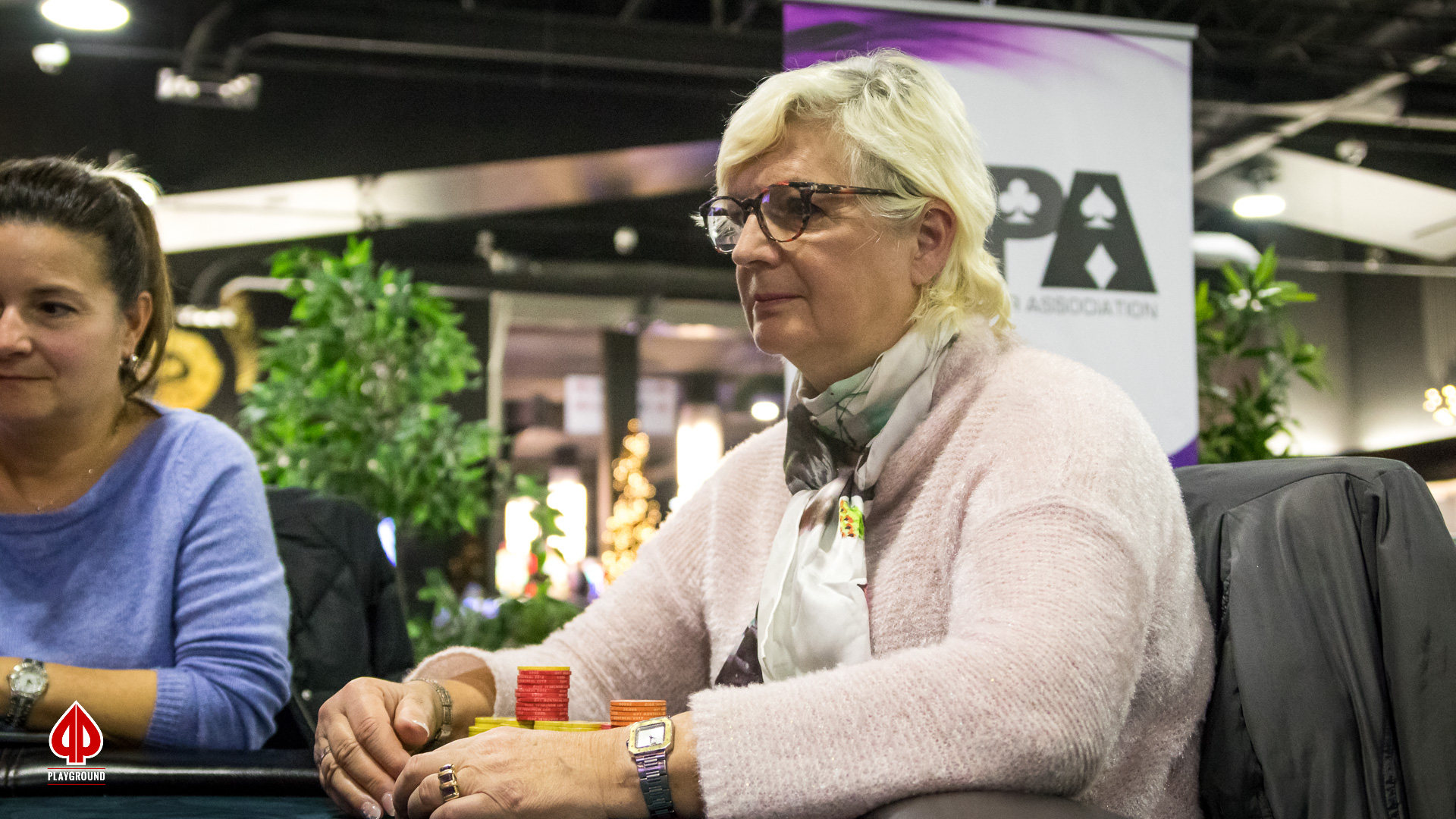 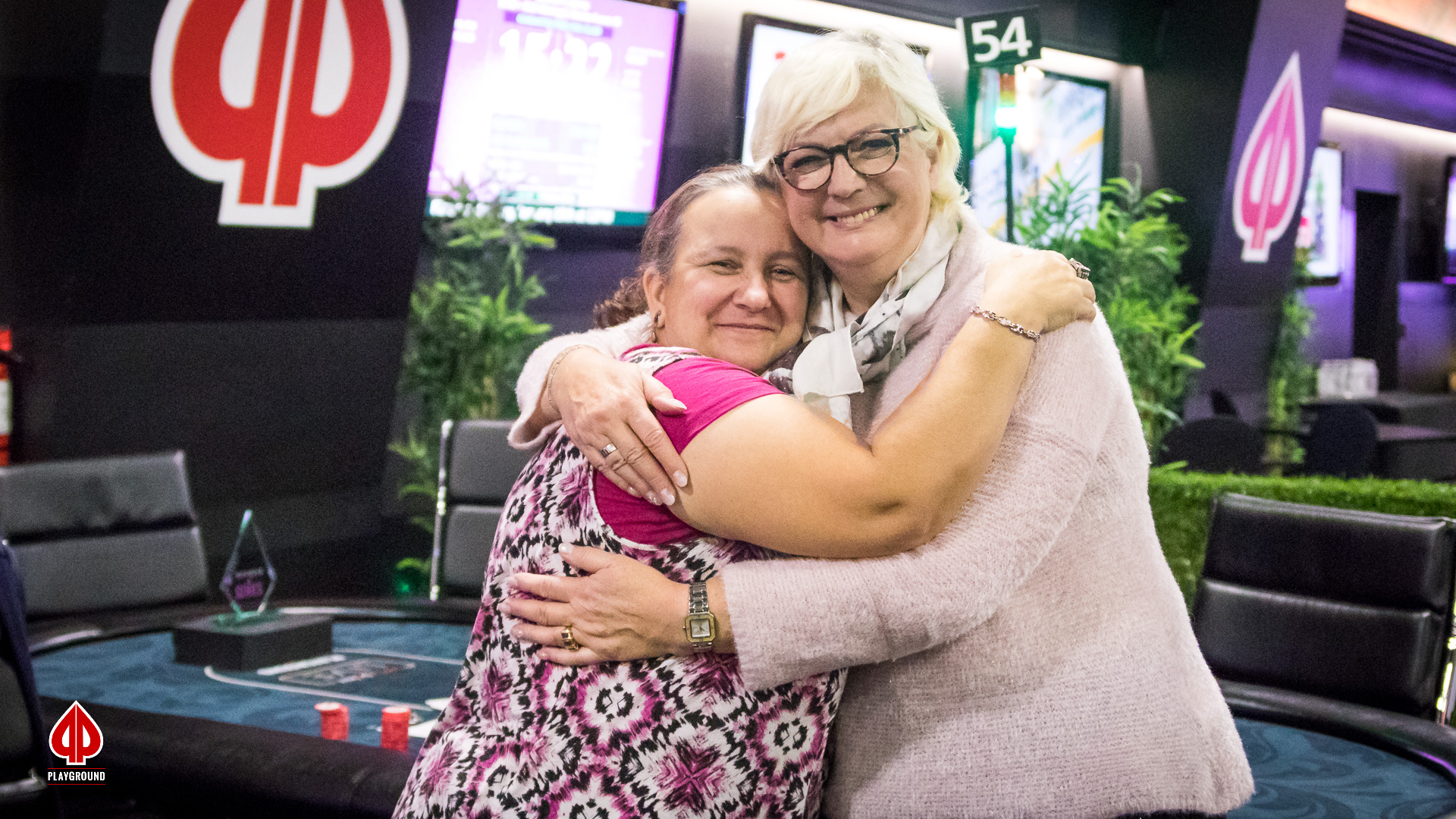 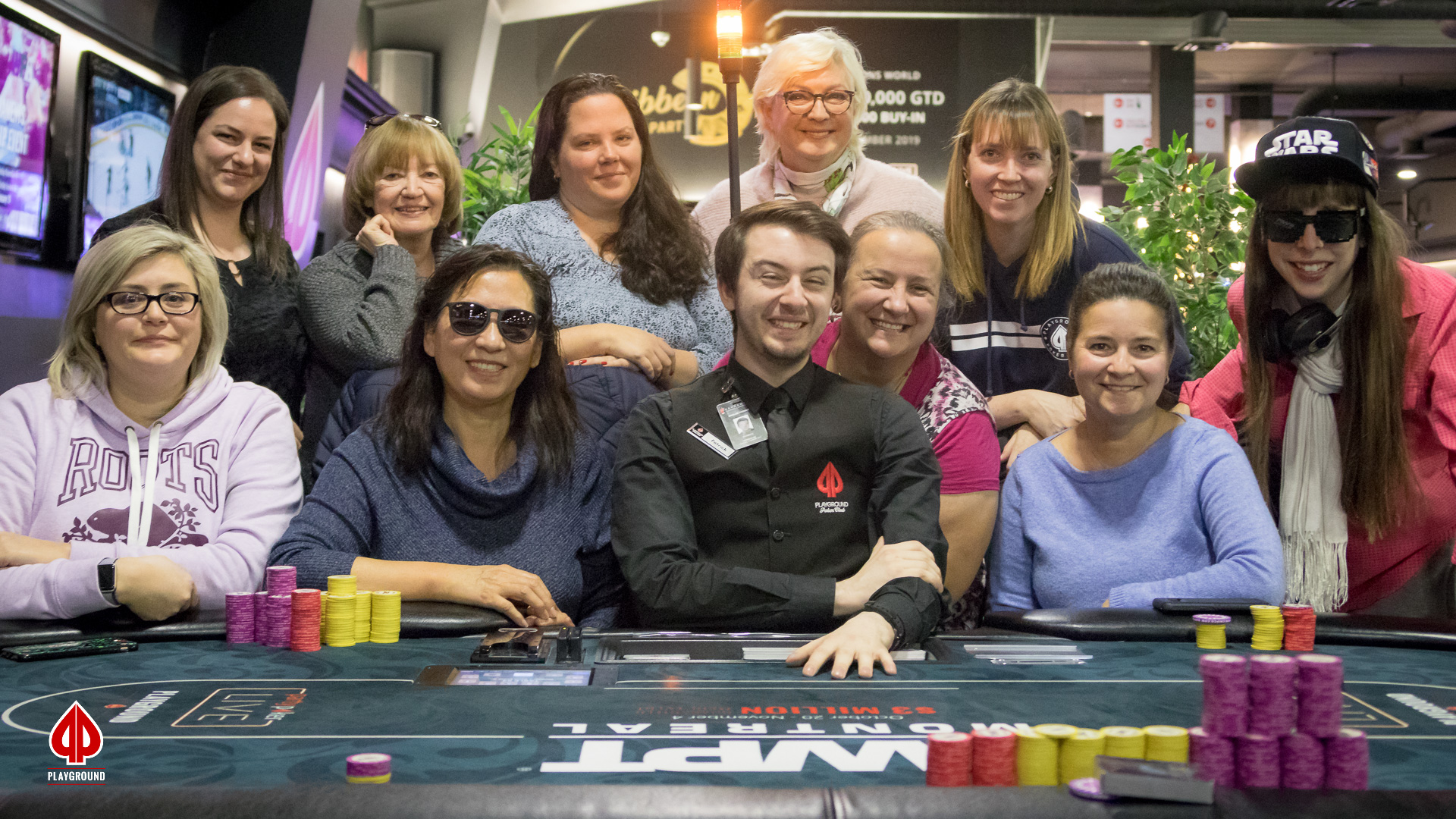 Cynthia Paquette and Sylviane Cassini were almost even stacked when heads-up play commenced. The battle has been epic as both players simply refuse to give up. Paquette lost some chips earlier on but she keeps managing to double back up against Cassini. Just a few hands ago, Paquette moved all in with two pair on the flop and was called by Cassini holding a flush draw. Cassini hit her flush on the turn but Paquette just wouldn’t give up and she asked the dealer for an eight on the river, which he delivered, giving her a full house.

On the last hand, Paquette shoved

and Cassini made the call with

. Once again, Paquette was behind pre-flop but then saw magic on the

flop, giving her top pair. The

river were of no help to Cassini and Paquette, who started the hand with 440,000 chips, is now sitting with the dominant stack, just under 1,000,000 chips. 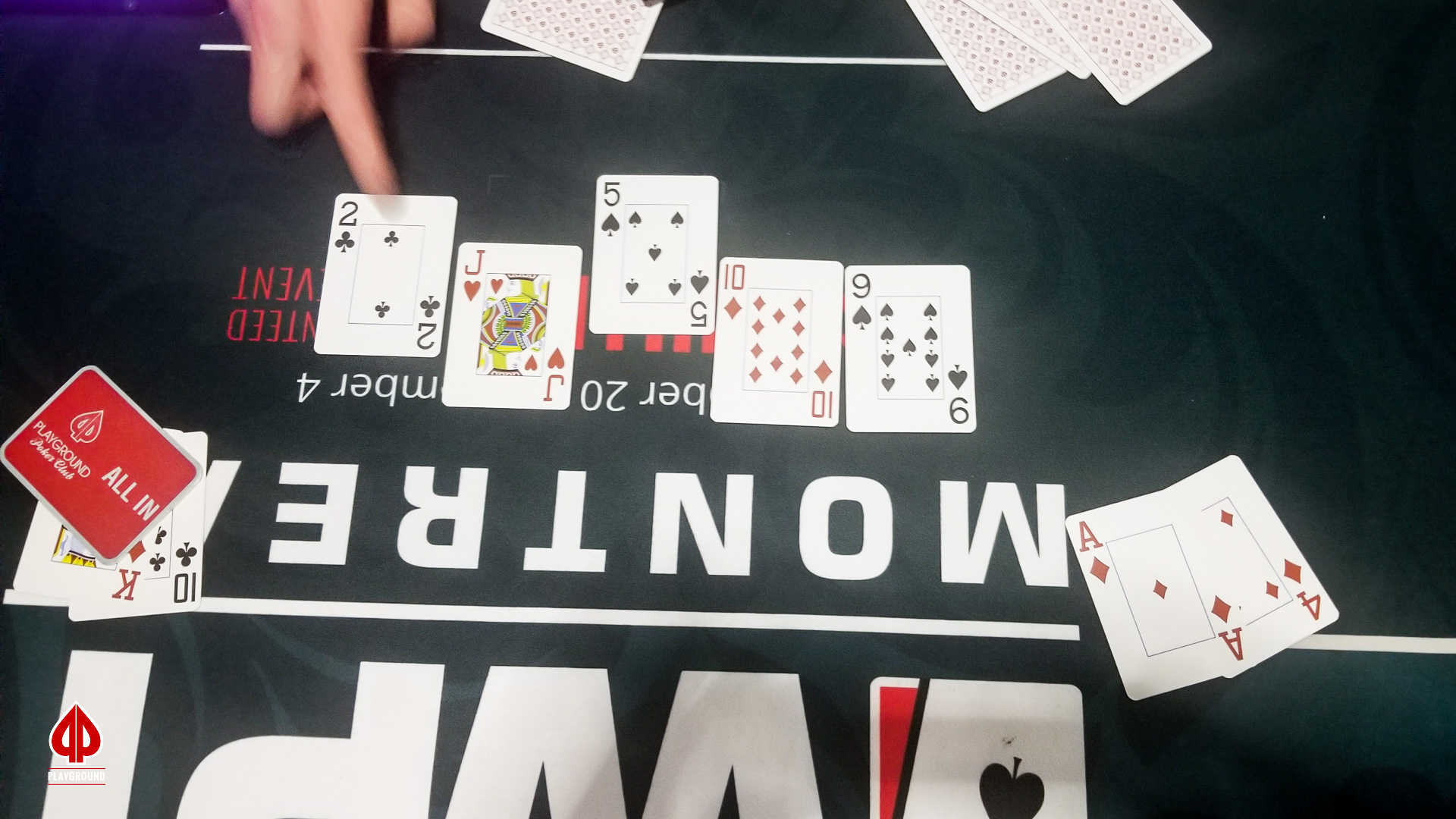 Over the last level three more players have been sent to the tournament desk to collect their payout slips.

The tournament is now heads-up between Cynthia Paquette and Sylviane Cassini.  As the two players are pretty much even stacked, they decided to do an ICM chop and then will continue to play down to a winner who will receive 5% of the remaining prize pool.

The deal works out as such:

The players are now playing down to a champion who will receive an additional $206 along with the trophy and the bragging rights. Good luck to both competitors. 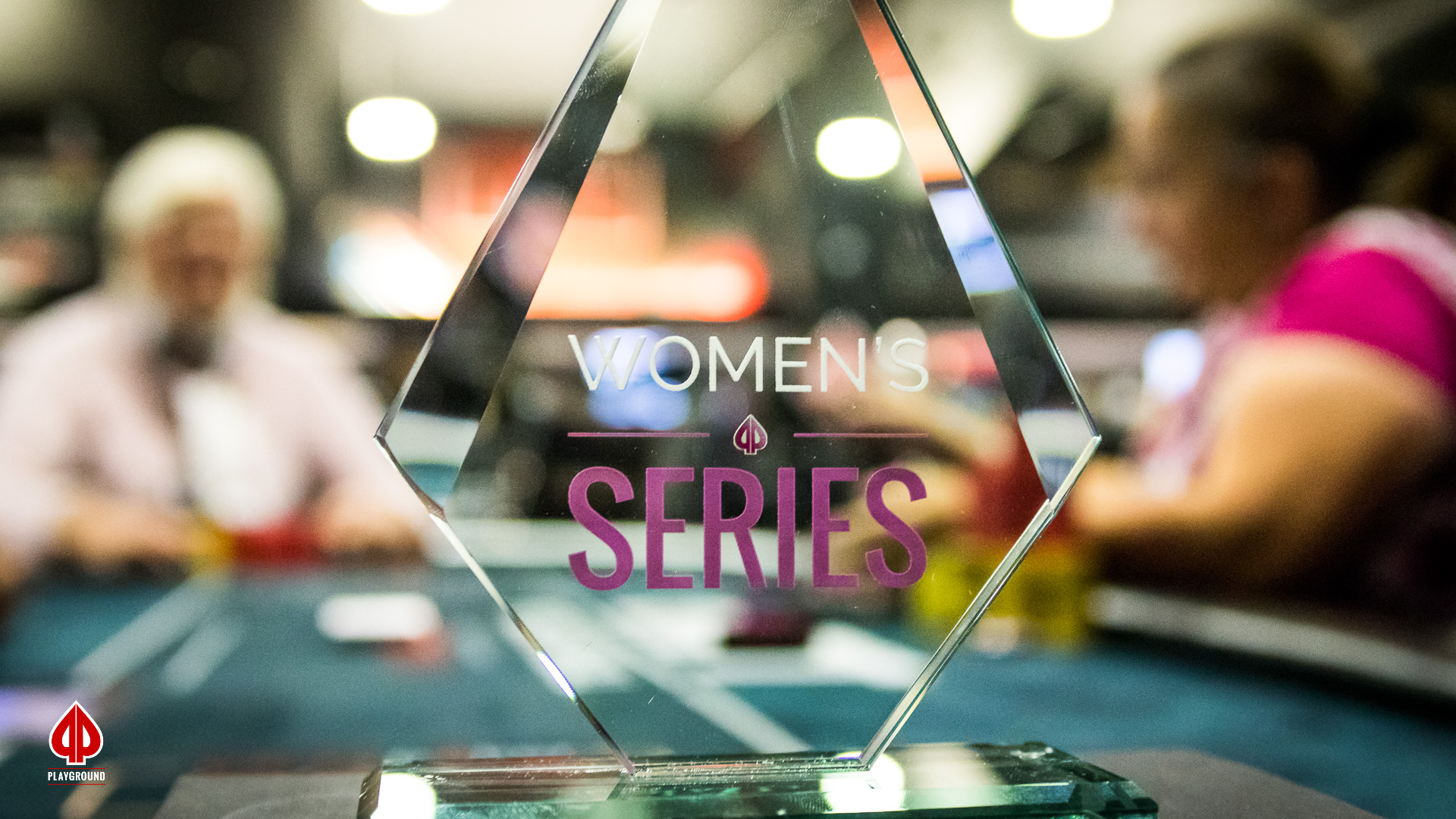 There have been three more eliminations since the break:

Cynthia Paquette has now taken the lead with an impressive stack of 362,000 chips, and she is followed closely in second by Sylviane Cassini who is playing a stack of 344,000 chips.

Since the final table was formed, the following players have exited and headed to the cage to collect their payouts:

After having lost Brigitte Korak in 12th spot, it took over an hour for the tournament to go from 11 players on two short-handed tables (one of five players and the other with six players) to finally form the final table. Helen Bechard of Champlain (NY) tried her best today but unfortunately she exited in 11th place, just shy of the final table.

The players on the final table have each received a cool looking card protector courtesy of Playground Poker and the Women’s Poker Association. As only the top eight finishers were supposed to be paid, the finalists also decided to pay a “double-bubble” so that all ten finalists would be in the money! They requested that the floor remove $50 from each of the top six places, and then $15 each from seventh and eighth place so that the players who finish in ninth and tenth each would receive their buy in of $165 back. 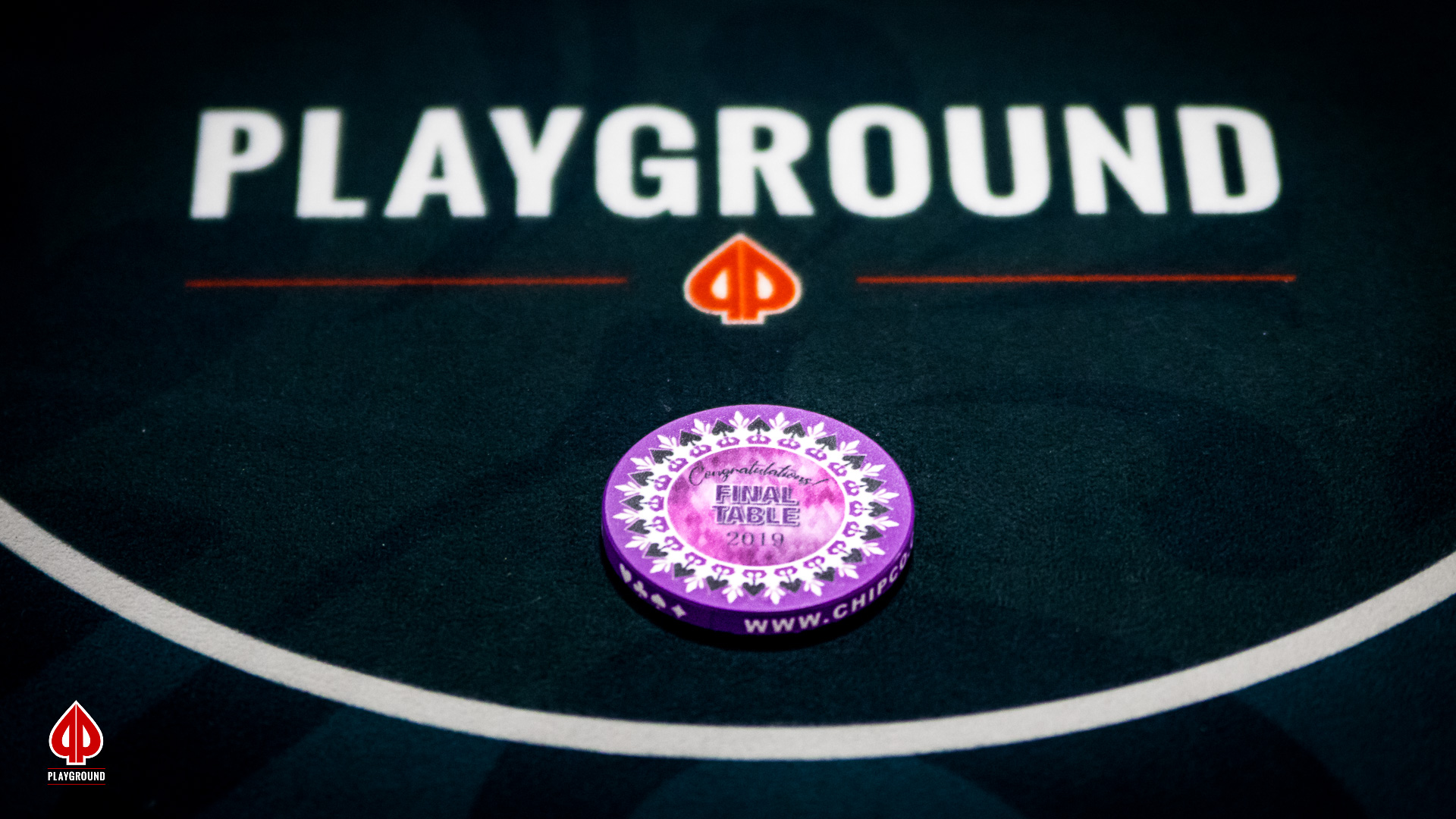 The players have just returned from their third break of the day and although there are many stacks that are just slightly above or below the average of 96,800 chips (32 big blinds), one player has almost three time the average and is way above the rest of the field; Sylviane Cassini is in command, sitting on a stack of 290,000, good for 97 Big Blinds. She is followed in second place by Giuseppina Arcamone who currently has 204,000, or 68 Big Blinds.

Here is the leaderboard from the break:

The field is thinning and there are now some big stacks in play as the players are approaching the money bubble. There will be another break coming up shortly which will allow us time to count the stacks put together another leaderboard.

The remaining players are:

The women have returned after the second break of the day and the field has narrowed to just four tables. Heidrose Brunswig has taken the lead at the beginning of level 11 with 102,500 in chips or 85 big blinds. Feng Fei has moved up to second spot with a stack doubling the chip average.

29 women remain as the stakes get higher, it’s anyone’s game at this point.

43 players remain on the third day of the Women’s Series. The average stack is just over 35,000 as the clock runs down on level nine.

Here is a look at the women still in play.

Now that late registration has closed the prize pool has been announced. With a total of 63 entries and five re-entries, the $5,000 guaranteed prize pool swelled to $8,401.

The final 8 players today will be in the money, with eighth place coming collecting $290 and the winner earning $2,411.

Late registration has now come to a close and level seven has begun. Winner of Event #1 of the Women’s Series, Crystal Abouhanna is currently in the lead with a stack of almost double the chip average.  Giuseppina Amato Sferlazza is close behind in second with a stack of 98 blinds.

There were five re-entries before registration has closed and levels have now changed from 20 minutes to 30 minutes.