The tournament attracted a total of 80 entries, including 12 re-entries, which helped to more than double the prize pool guarantee and put the top 10 finishers in the money. In addition to the cash prizes for each open event, the top 5 finishers in each open tournament receive a direct entry into the Final. The top 10 point earners for the series (not including those who qualify automatically) will also receive an entry in the Final.

Throughout the afternoon, the atmosphere in the tournament hall was friendly but competitive, and there was some top-notch poker on display. The tournament structure allowed for deep-stacked play, which became obvious when there were two tables remaining and the average chip stack was nearly 30 big blinds. Play slowed down considerably as the money bubble approached until the players finally agreed to a “double-bubble deal” with 12 players left in contention.

The final table came to be right after the bubble deal was made as the eliminations started to happen more rapidly. Kathy Sawers and Crystal Abouhanna had a good grip on the situation, and both players chipped up steadily until finally they were engaged in a heads-up battle. Once they were heads-up, they both had very similar chip stacks so at that point a deal was worked out as follows:

In addition to the above payouts, $220 remained along with the winner’s trophy for the eventual winner.

Play concluded on a wild final hand. The flop came down

. The turn was the

, and after Abouhanna bet, Sawers took her all in, only to have Abouhanna announce “I call.”  The hands were opened:

on the river did not change a thing, and just like that, Event #1 of the Playground Women’s Series crowned a champion, Crystal Abouhanna.

Event #1 Champion: Crystal Abouhanna, $2,265 plus an entry to the Women’s Series Final 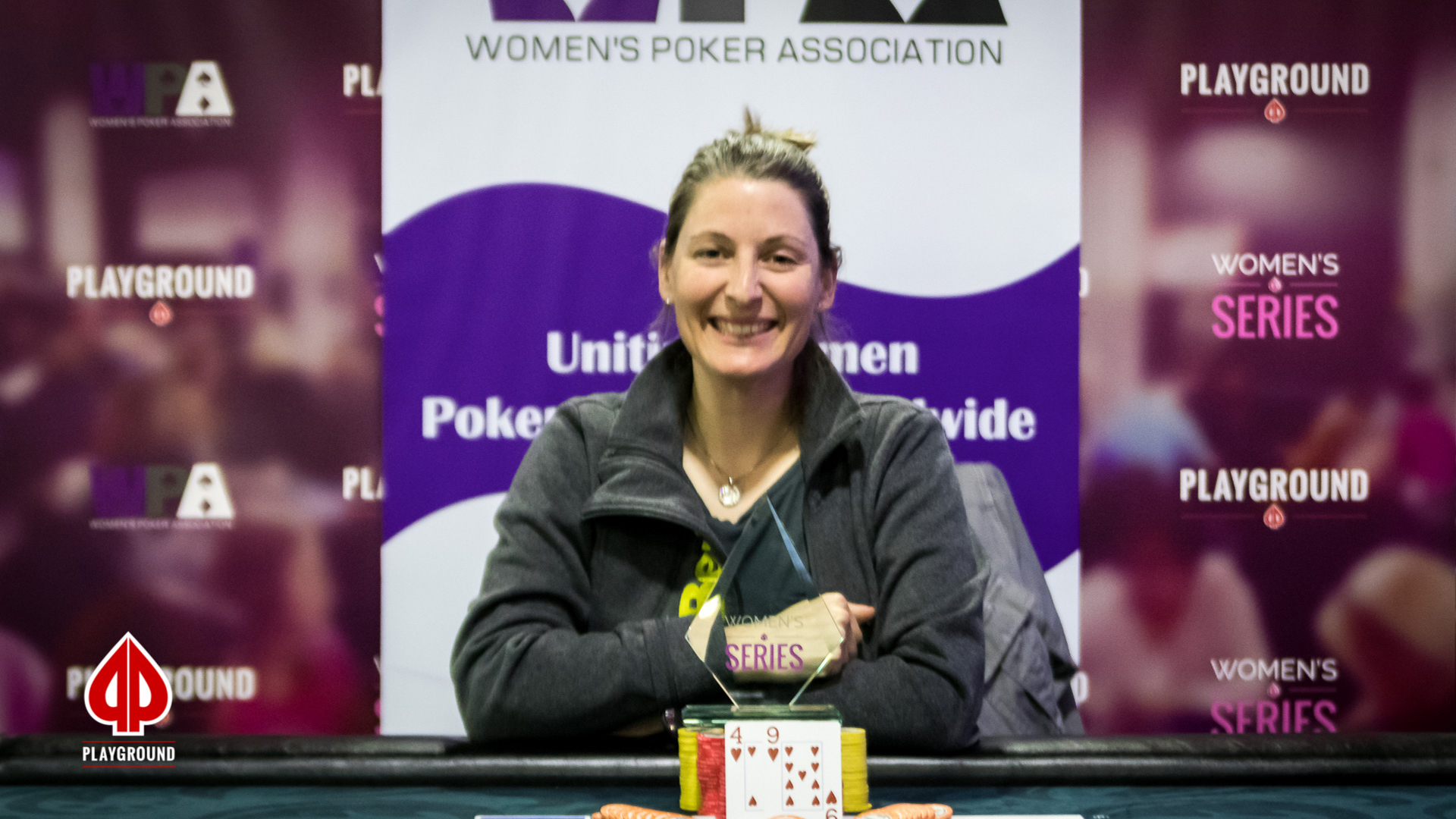 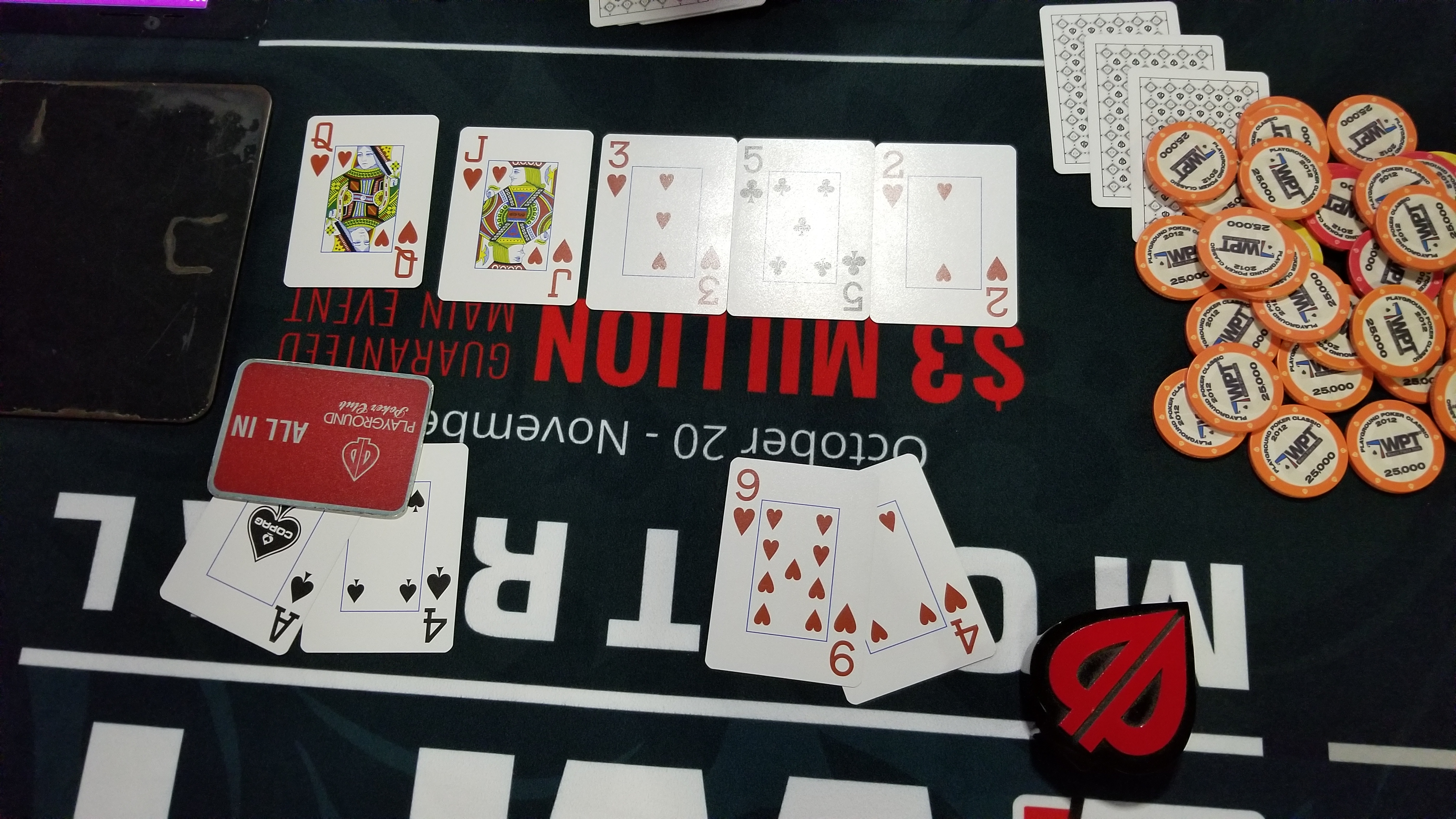 Second place: Kathy Sawers, $2,085 plus an entry to the Women’s Series Final 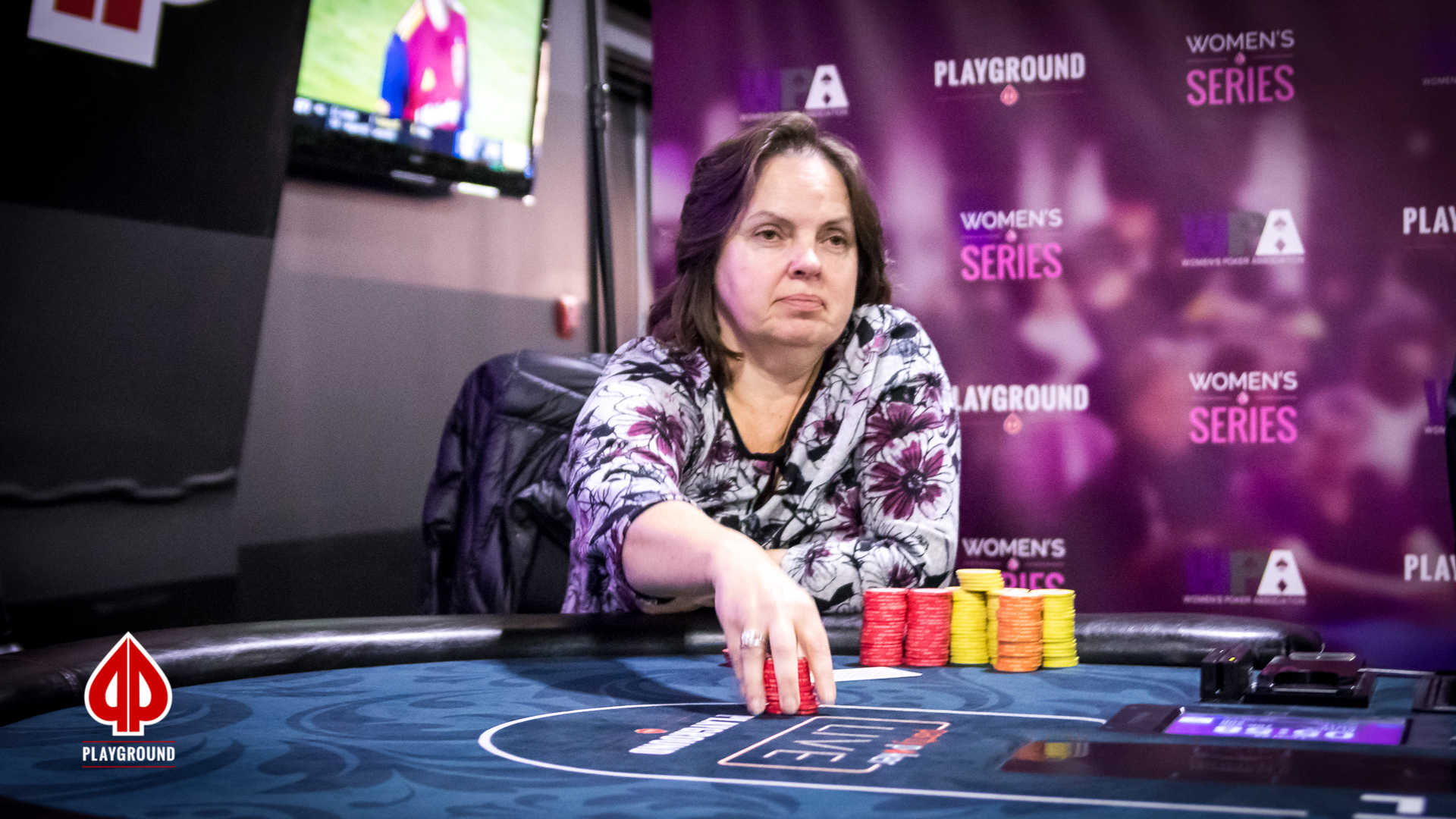 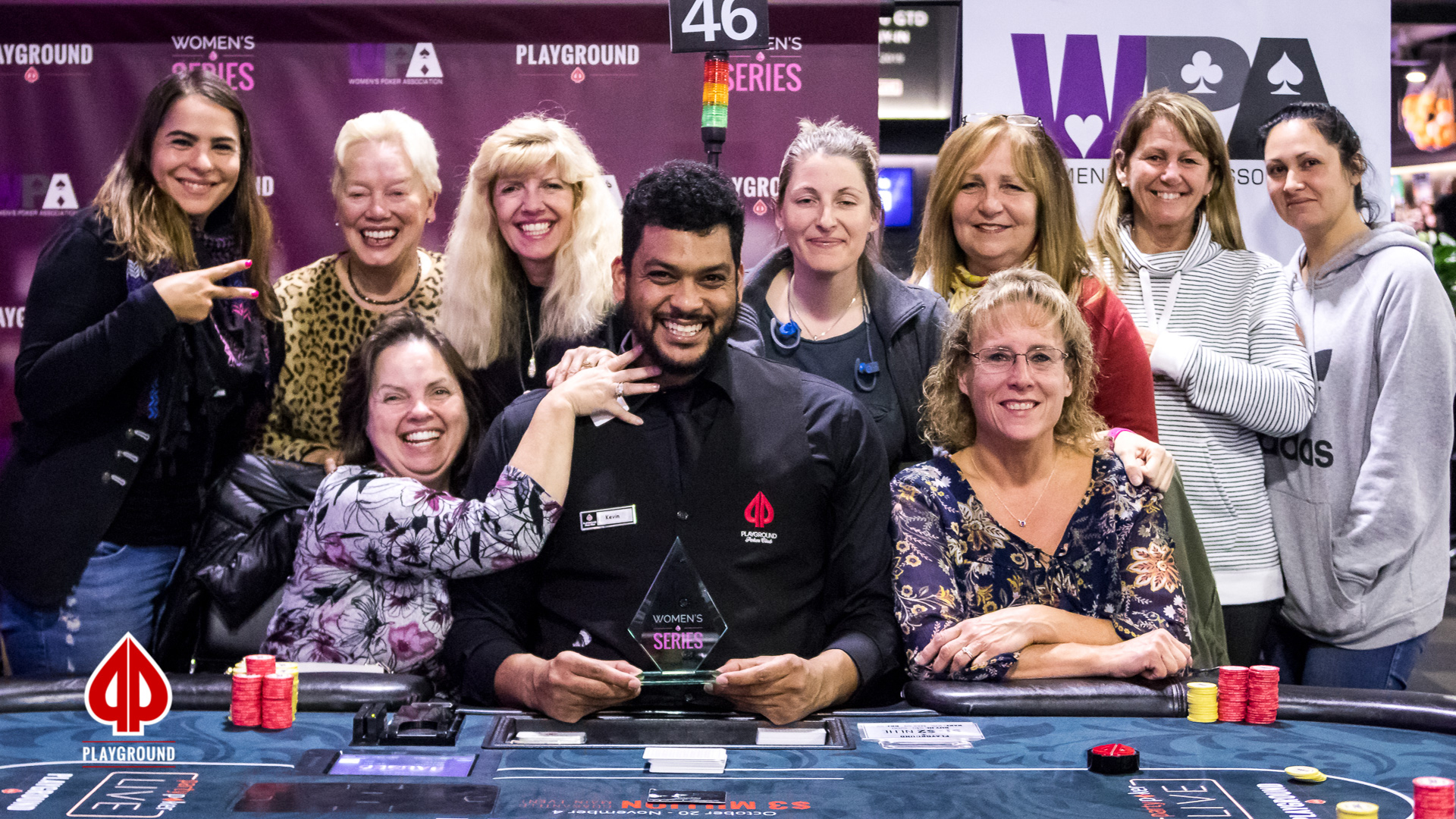 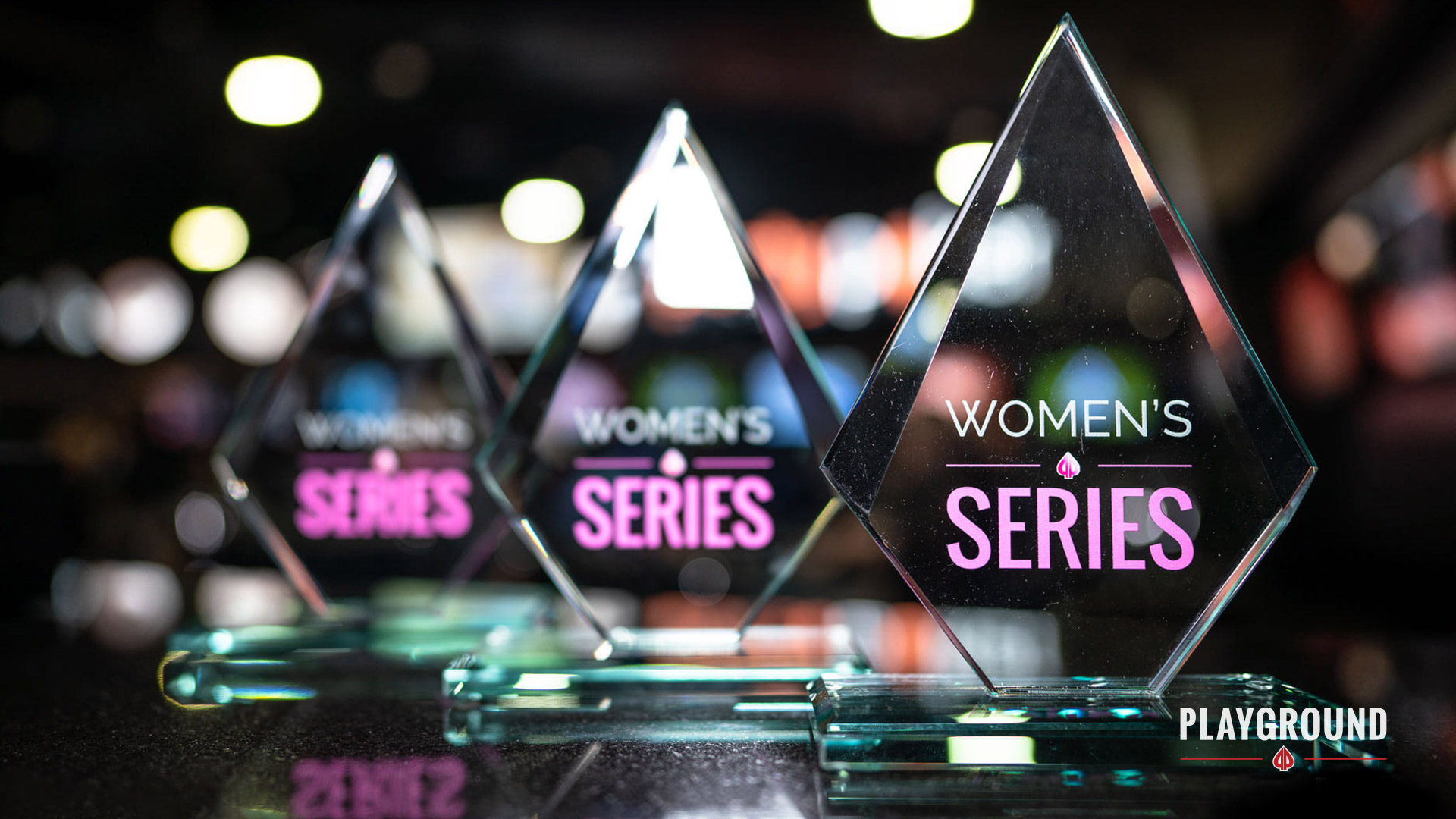 Carla Ruggiero was faced with a tough situation as she had a very small stack when the tournament went three handed, but she managed to grind away until finally there was just way too much pressure on her remaining chip stack. She ended up ultimately falling in third place, taking home $1,480 for her play today, plus an entry into the championship final. She was happy though with how it all ended  as she did walk away with more money than what the proposed ICM deal was offering to her. 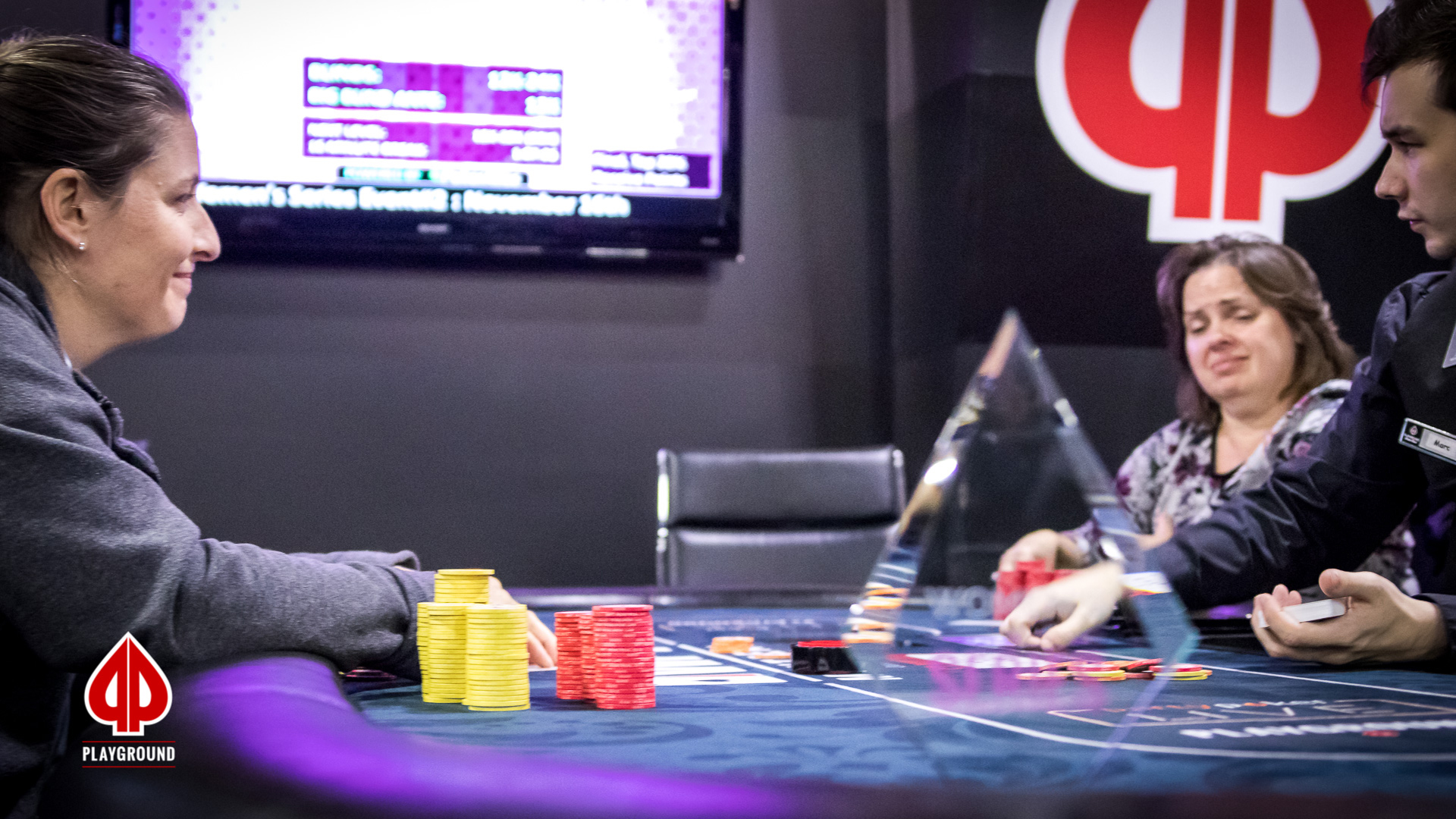 The players have just come back from another break and Crystal Abouhanna has a clear lead with 865,000, followed closely by Kathy Sawers with 655,000.

The players had the floor enter the numbers into the ICM calculator to see if maybe they could reach a deal, but in the end, they decided to play on.

Here are the chip counts from the break:

Right after the break, there were two more bustouts:

Therese Legault has been on a heater on the final table. At first she had lost some chips, but she has now just cracked aces and taken 261,000 from Genevieve Champagne. That was just after she had won a few other key hands. Chips have also been flying to Crystal Abouhanna who is building a huge stack.

Since the final table has started, there have been a few eliminations:

Here are pictures of Therese Legault and Crystal Abouhanna, let’s see if they can now keep up the run good:

As expected as soon as play re-started after the deal was reached, the short stacks gave it their best efforts to double up and two eliminations happened quite rapidly.

Here are the final 10 players:

Kevin L., The smiling dealer with the event trophy surrounded by 10 happy women!

During the break, the remaining players decided that it was time to speed things up. They realized that everyone remaining was playing very tight as they all wanted to be in the money. The tournament has been playing for nine and half hours and there is still a long road ahead so they agreed to the following “double-bubble” deal. The next two players eliminated will each receive $175, after $100 was removed from the top three prizes and $50 was removed from the fourth-place prize to provide small payouts for the next two eliminations.

Play is now about to continue with all of the players in the money!  The pace will now pick up as the players are assured of a cash, and the final table is now just around the corner.

Here are the chip counts of the final 12 players:

Over the last few levels the pace of play has slowed down, as the money bubble is approaching. The players are clearly thinking about the series leaderboard, as everyone wants to stay in the running for the series final.

The field has only lost one player in the last hour, and the remaining players are demonstrating their patience. With the average chip stack sitting at almost 30 big blinds, there is still a lot of poker left to be played.

Genevieve Champagne is still in the lead, and the three other big stacks belong to Natalia Nogina, Crystal Abouhanna, and Karen Greenwood.

An updated leaderboard will be provided following the upcoming break. 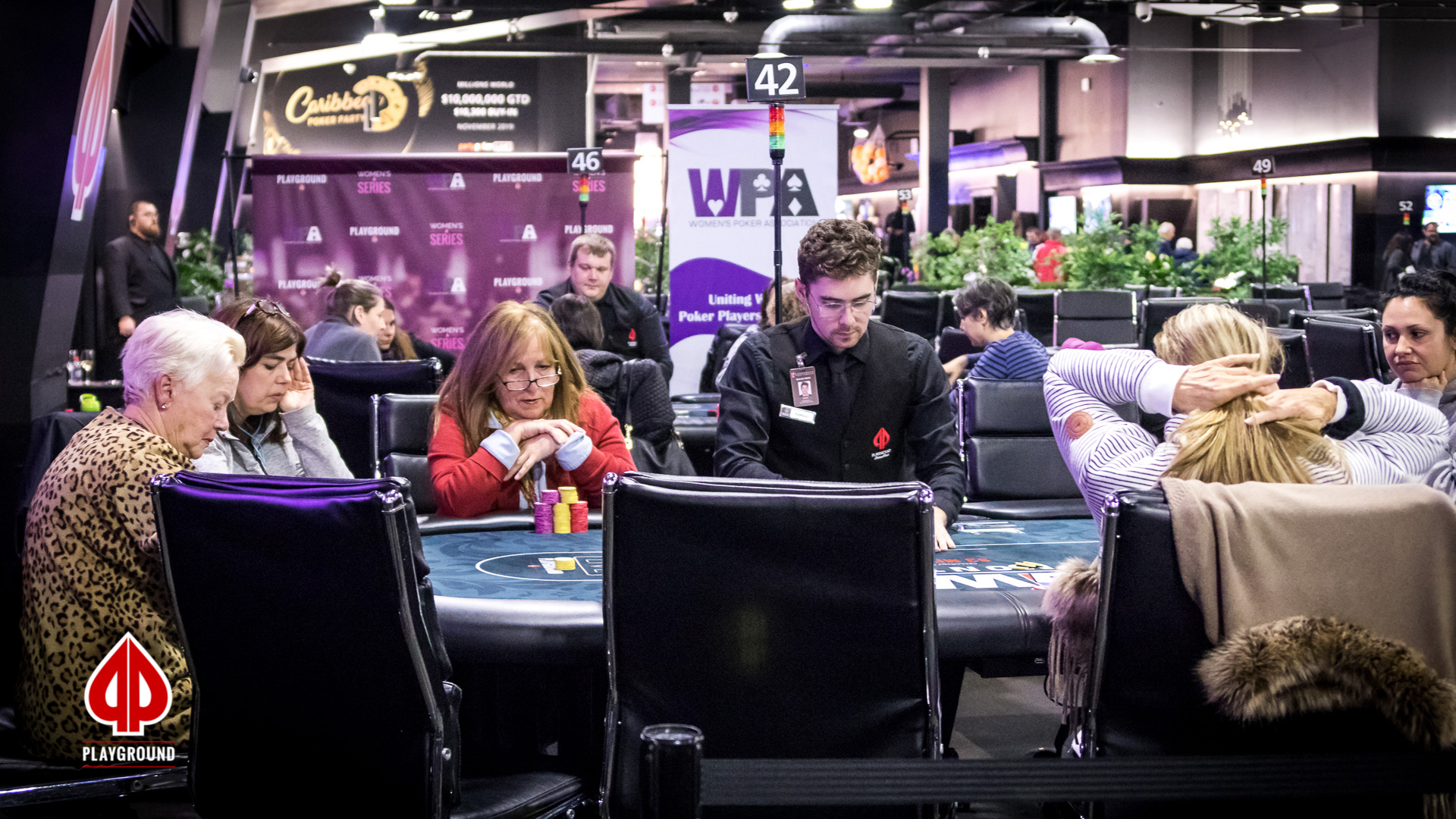 The players have just returned from the third break of the day.

Kitty S has lost a lot of her chips, as she put it “the last hour went bad for me.” But she still has chips in play so her tournament hopes are still alive. With only 18 players remaining, the chips have been moving around the felt as the tournament inches closer to being in the money.

A new chip leader has emerged: Genevieve Champagne, a local cash grinder and tournament player now leads the field with 237,000, followed in second by Crystal Abouhanna (206,500) who is the only other player over the 200,000 mark.

Here are the current chip leaders:

Here are some pictures of the women who have been battling it out today (some photos were taken earlier on in the afternoon):

The players have just returned from the second break of the day. There is no question that some great poker is being played today, and with 38 players remaining in the field there is still a lot of action ahead.

Although it is anyone’s game, Kitty S, a solid player who is also a lot of fun to have playing on your table since she really enjoys the game, came in from Mississauga, Ontario, to take part in the Women’s Series. What a great decision! Kitty has more than triple the current chip average, putting her comfortably out ahead of the pack.

Kathy Sawers ran into some rough spots today, as she had both pockets aces and pocket kings cracked, which cost her all kinds of chips. Needless to say, she wasn’t thrilled about the situation.

In a hand when there was already a substantial amount of chips in the middle, following Kitty S’s all-in raise over the top of Emily Nakada’s early position raise, Kathy decided to take a shot at the big pot. It would become a three-way all in!

Kitty was in the lead, and Nakada had the over cards. Kathy was in need of some serious assistance.

, and Kitty stayed out in front. The turn brought the

, giving Kathy both a gut-shot-straight draw and a flush draw. The dealer peeled the

, and Kathy celebrated after realizing she hit her flush. She is now back in business with a nice triple up, and since Kitty covered Nakada, she also picked up a decent side pot. 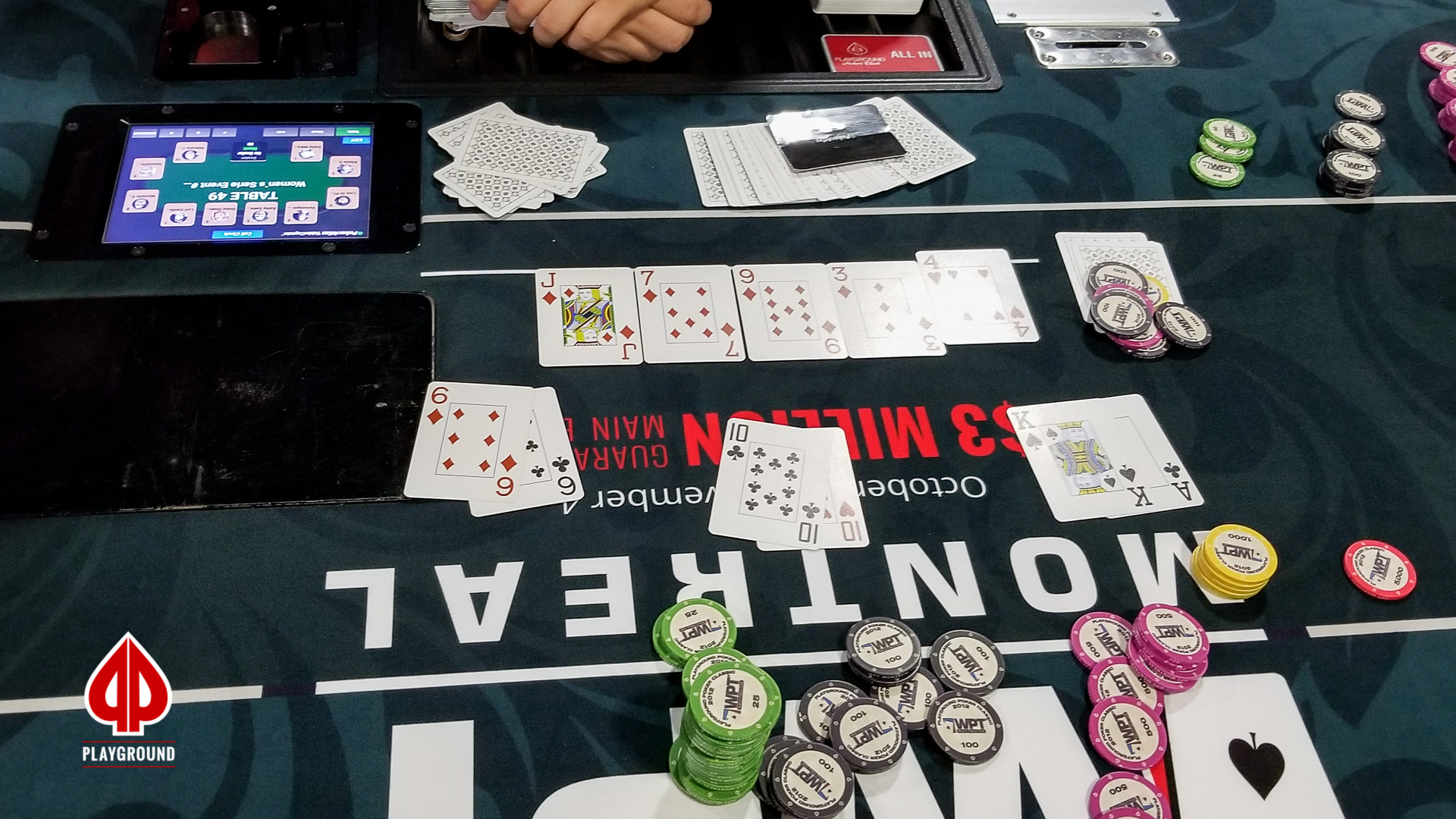 With a total of 80 players (including 12 re-entries) the $5,000 guaranteed prize pool swelled to $10,864 (NB: $10 of each buy in is removed from each open event to form the prize pool for the final champion’s tournament). 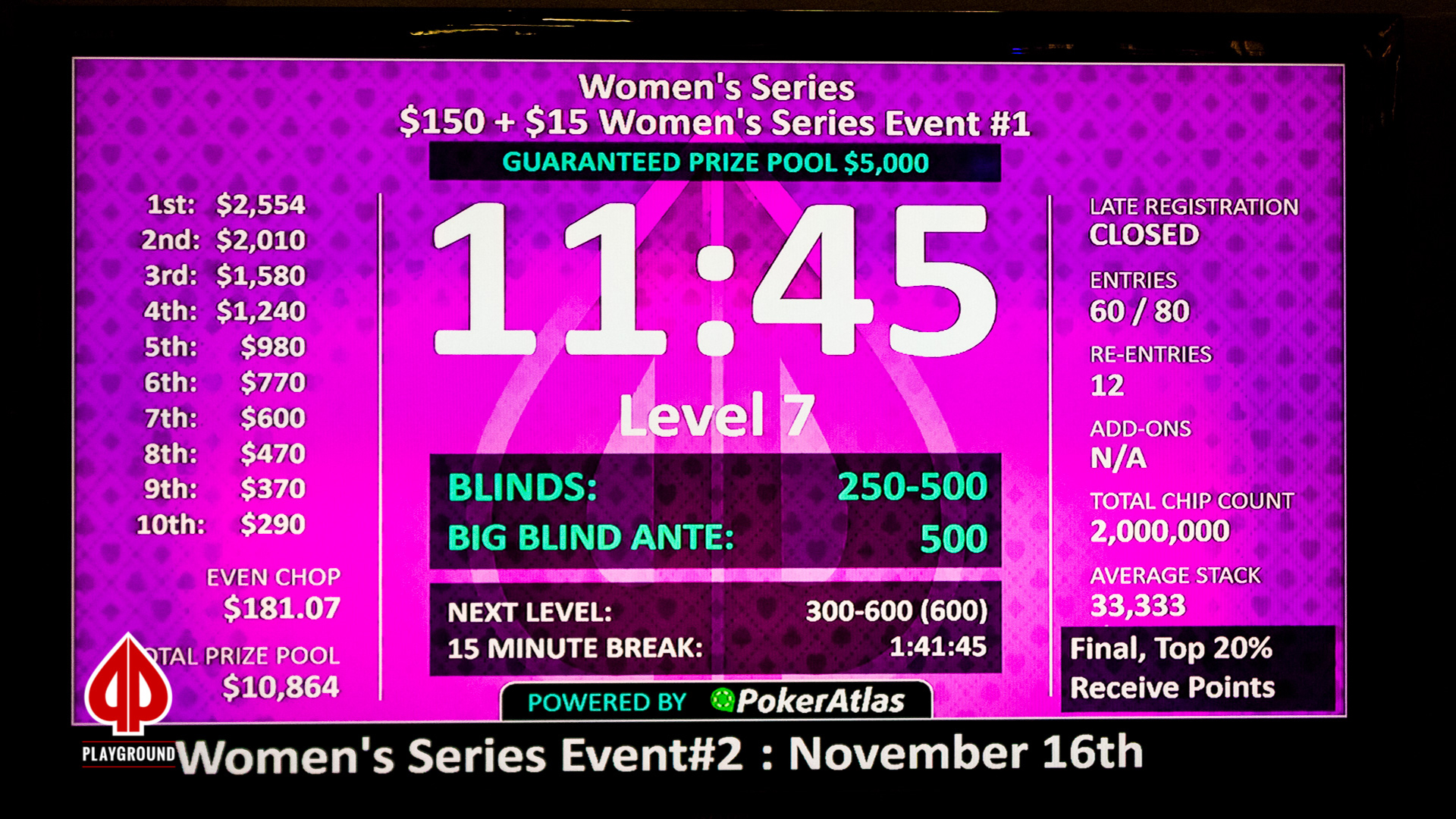