As the night progressed, the chip lead changed hands quite a few times. As soon as the money bubble burst, the bustouts started to happen in rapid-fire progression. On the final table, the action began at a fast pace, but when there were only five players remaining, it slowed down quite a bit.

Both Nicholas Soller and Tommy Inthouray played great games. Soller was coming off a deep run in the Playground 200, but was disatisfied with how his run ended in 20th place. Some of his friends suggested that he should jump into the evening event, and so he did.

Tommy Inthouray was patient on the final table and only played key hands when it made sense, taking chips off of the other players and laddering up the pay jumps along the way. When heads-up play began, Inthouray had a slight chip lead over Soller. A key hand developed when Soller shoved

and was snap called by Inthouray holding

. The borad ran out

, making a flush on the river for Soller. He then had over 85% of all of the chips.

Almost immediately after that hand Soller picked up

, and he put Inthouray all in. Inthouray made the call and opened his hand,

. Soller right away said “no worries, sevens don’t hit on this table.” The board ran out

, and just like that, the Freeze crowned a champion, Nicholas “Shooter McGavin” Soller, who collected $3,832 for his championship win. Tommy Inthouray was the runner-up and earned $2,920 for his efforts. 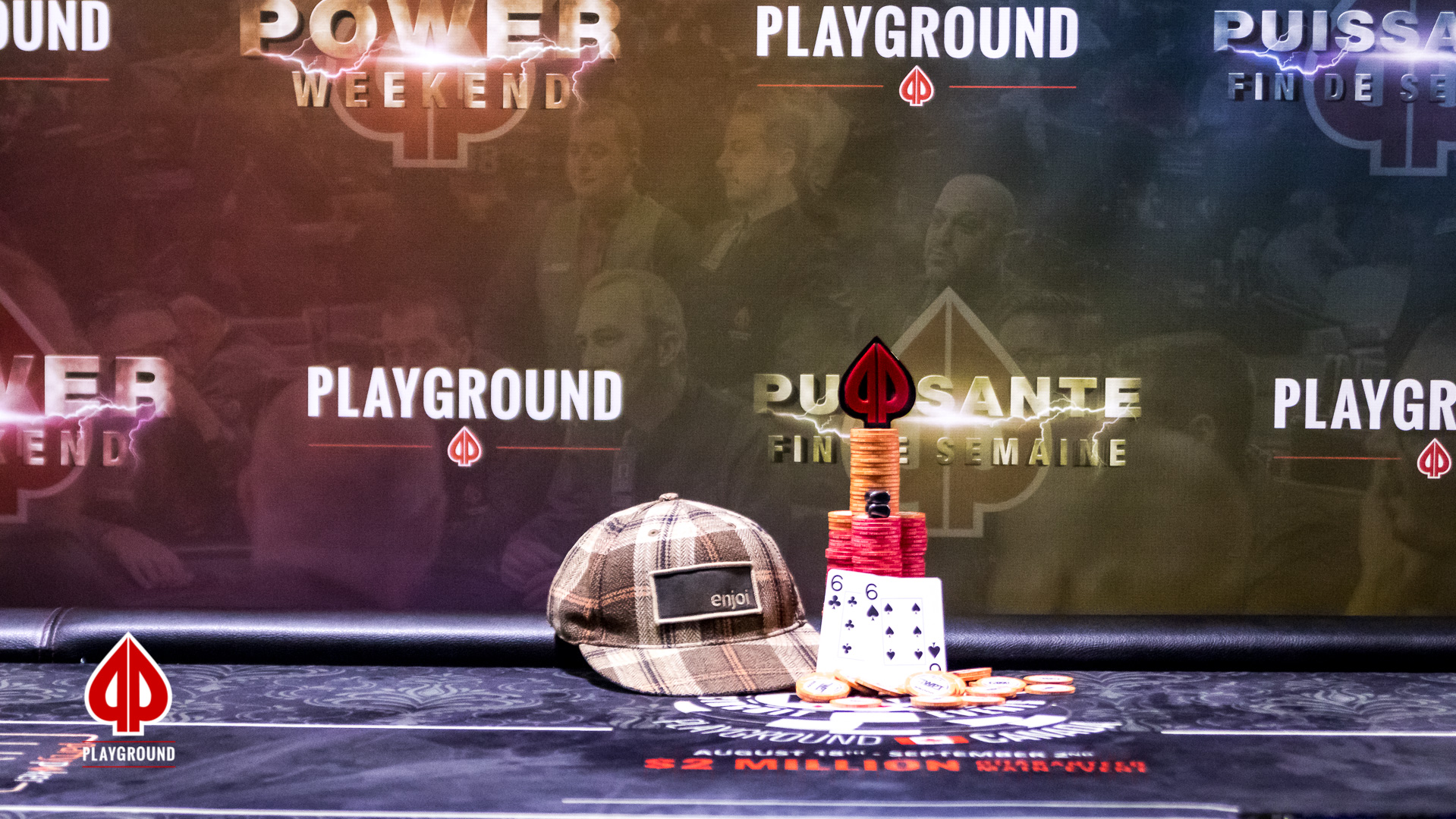 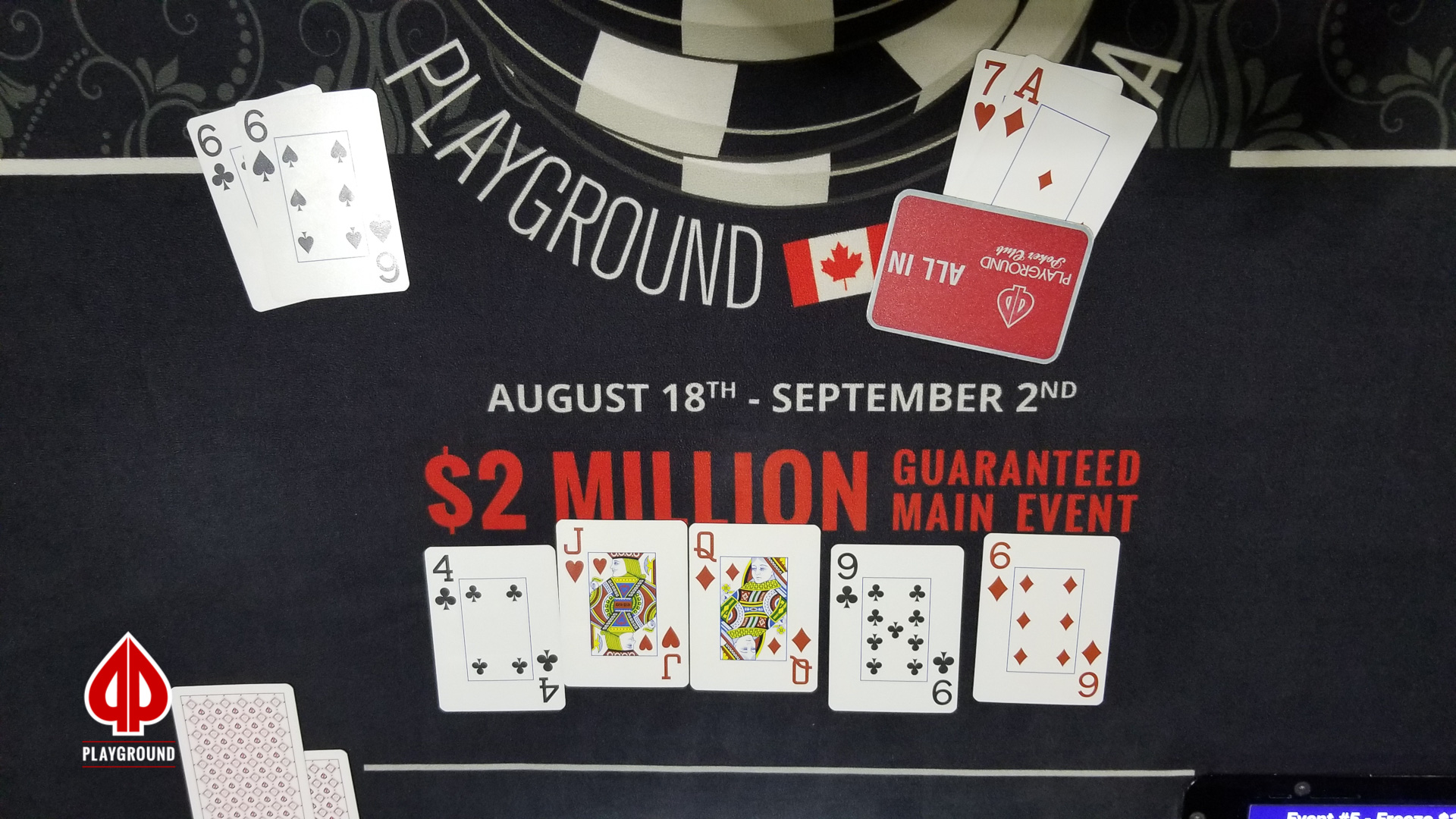 The hand that changed everything: 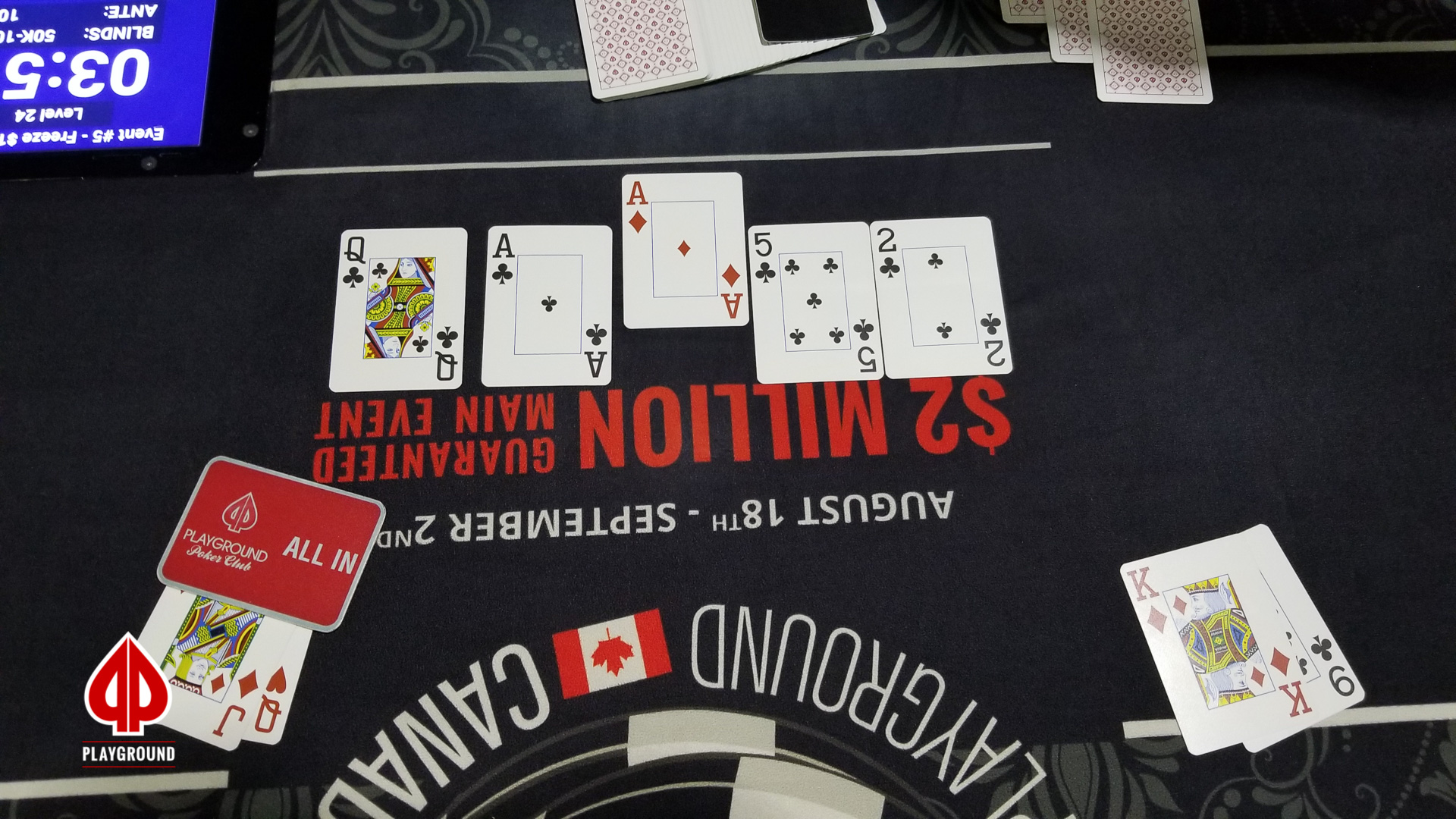 Raphael Ohayon was feeling the pressure of the blinds and when he saw an ace, he decided it was time to get it in. Inthouray made the call, also holding an ace.

and Ohayon collected $2,200 for his evening of tournament poker.

The tournament is now heads up for the championship between Nick Soller and Tommy Inthouray, with Inthouray covering Soller by a few chips. 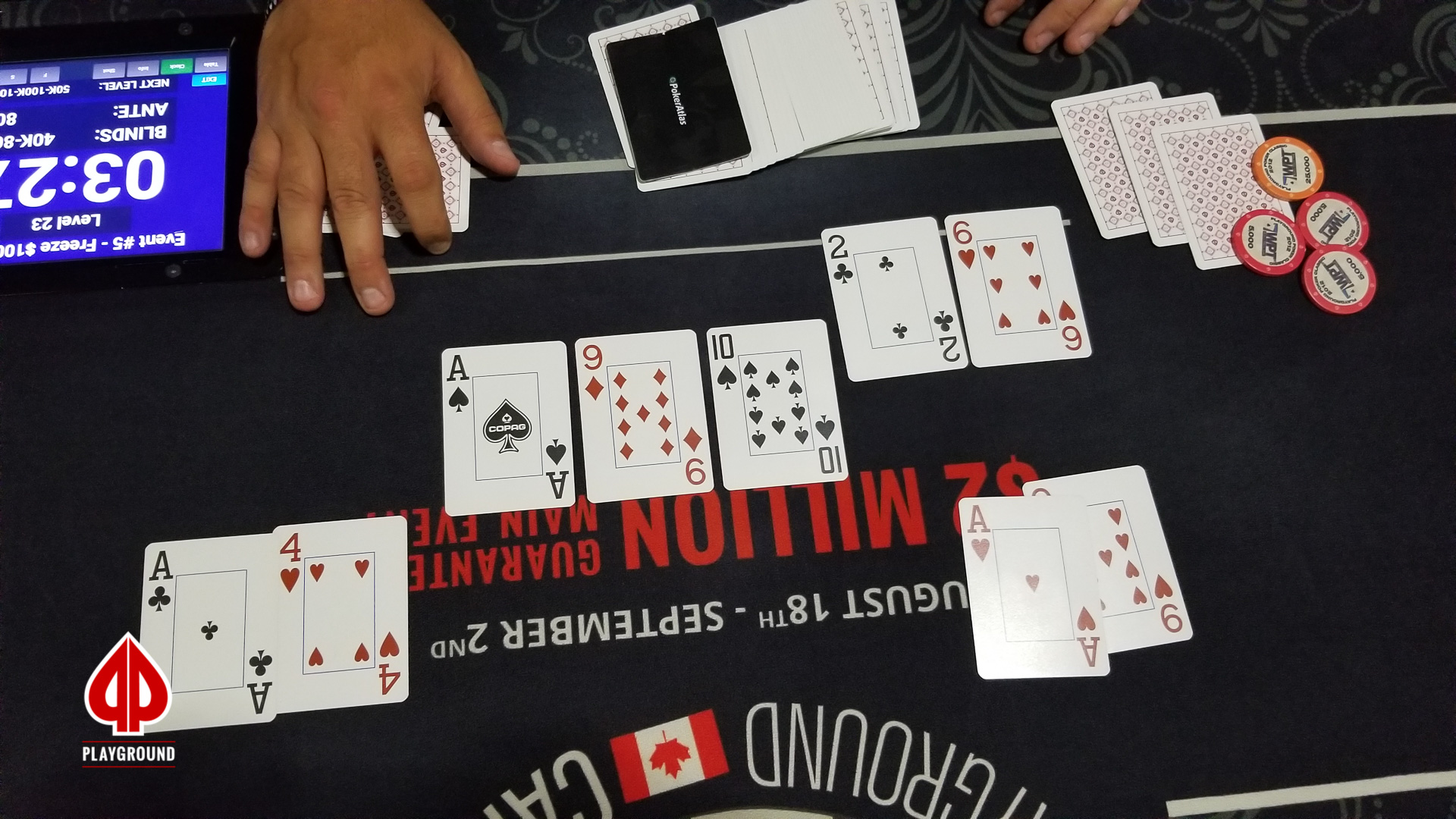 Dany Phelps picked up a pair and shoved his stack, only to be instantly called by Tommy Inthouray in the big blind.

Phelps was a head with his pair but Inthouray had a scary hand with two over cards, and possible flush and straight draw. Well, it was a crazy flop with the

giving both a straight draw, although Phelps of course had some blockers. The turn came the

, now giving Inthouray a gut shot possiblity, and the river was magical for him as he hit the

to give him his straight. 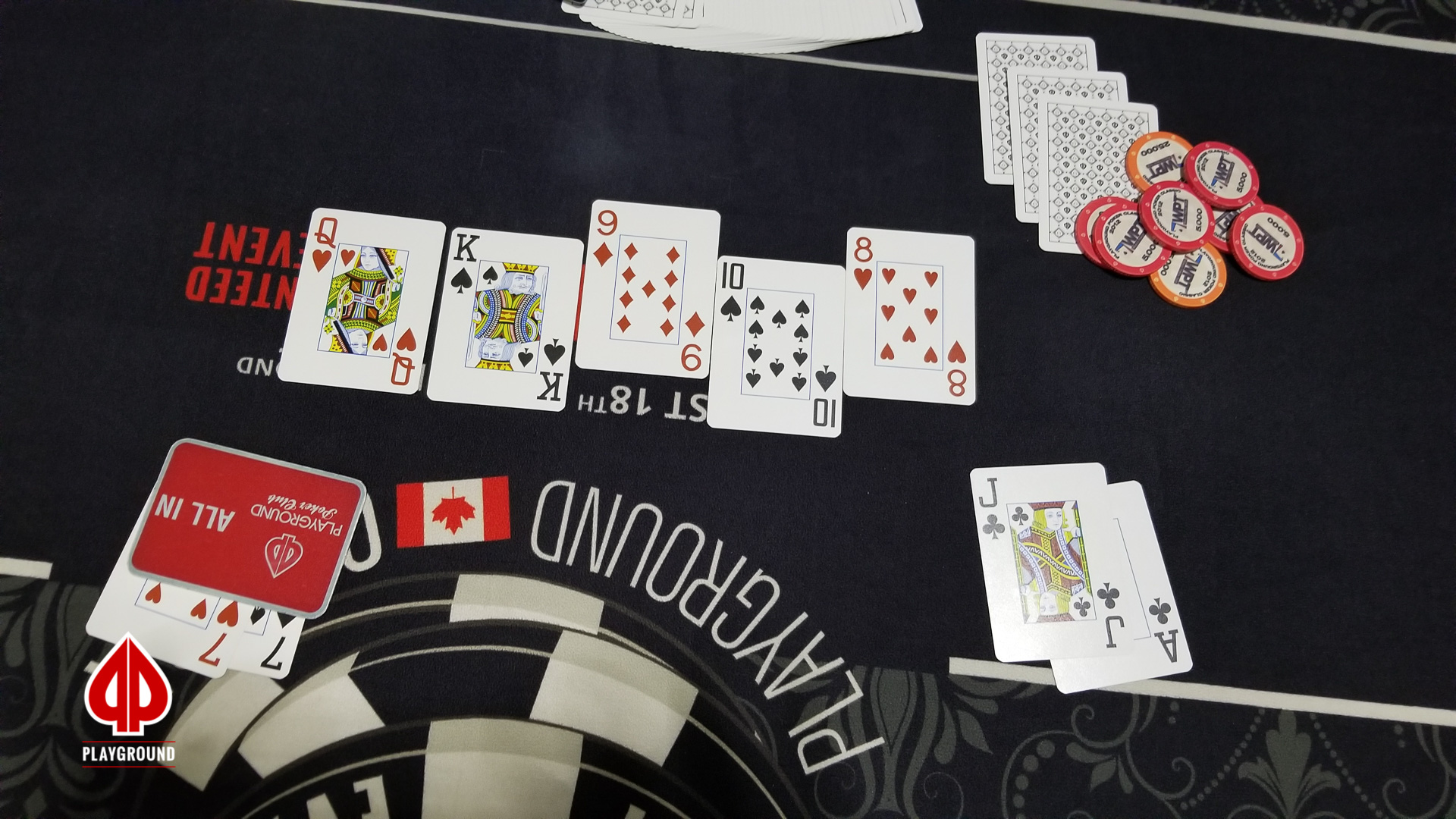 Over the last level the tournament has lost Giovanni Moscato in seventh place, collecting $710 for his efforts, followed by Louis-Patrick Levros who finished in sixth for a payday of $940. A fun evening of poker and a good return for both players on the small investment of $110.

Nick Soller still has the dominant stack on the table with close to half of the chips in play sitting in front of him.

Action started off from the very first hand once the final table was formed. There were a few short stacks and Nick Frascarelli was the first casualty exiting in 10th place for $300. The next bustout was a bit of a surprise as Ghislain Pigeon, who had one of the better stacks, got into a hand against Dany Phelps and lost his stack to exit in ninth, collecting $400. Then it was Jean-Luc Joseph’s turn to pick up his pay slip for $530 in eighth place, which was a formidable feat considering he was one of the shortest stacks when the final table started.

Nick “Shooter McGavin” Soller picked up a huge double-up when action had folded to Jean-Francois Laramee on the button who limped in. Dany Phelps folded his small blind and Soller checked his option in the big blind. The flop came AK3 and Soller checked, prompting a bet from Laramee of 50,000. Soller replied with a 3-bet to 150,000, which Laramee called. The turn was a brick and Soller again gave it long thought, and finally decided to shove his remaining 332,000. Laramee made the call after having tanked for some time, and opened up K4, but unfortunately for him, Soller had limped AK and had smashed the flop, taking down a huge pot and putting him into first place just before the break.

Here are the chip counts from the break:

The bustouts have continued to be fast and furious and the tournament has now reached the final table. Here are the chip counts:

Over the last hour chips have been flying across the tables as the blinds are catching up with the player’s stacks. Both of second break chip leaders are now gone, and the new leader is Jordano Mascaro, with 342,000 chips. Following in second place is Brigette Metivier with 288,000.

Play is fast approaching the money bubble and with the average stack at only 16 big blinds, there were be a lot of swings over the next few levels.

Here is the leaderboard:

Sometimes when there is action going on and you are in the big blind, well, it kind of sucks. Other times, well, it’s just amazing. It was the latter for Haralambos Margaritis who just picked up a nice pot while nursing a below average stack.

Sarah Lavoie-Richard limped in from under the gun and it folded around the table to Jeremi Kielian who was seated in the hijack and decided to raise it up to 3,700. It then folded to Haralambos Margaritis in the big blind who without hesitation moved all in. Lavoie-Richard didn’t think about it for too long before she also moved all in for less. When it came back to Kielian, he asked the dealer for a count. The larger all in was for 32,900. It took at least 30 seconds but ultimately Kielian decided to give up on the pot, but it wasn’t an easy fold for him, that’s for sure.

The cards were opened:

Both players held on tight as the dealer fanned out the board. The flop came:

and Margaritis had flopped top set, but of course there was a sweat as Lavoie-Richard was drawing to the nut flush. The turn was the

giving Lavoie-Richard her flush. As fate would have it, the river paired the board with the

and made a full house for Margaritis, sending Lavoie-Richard to the rail. A crazy turn and crazier river.

Margaritis picked up a nice pot, more than doubling his stack and putting him above average heading into the second break of the evening.

Once the break is done, we will update the leaderboard.

A break is coming up shortly which will allow us to again give an update to the leaderboard, stay tuned. 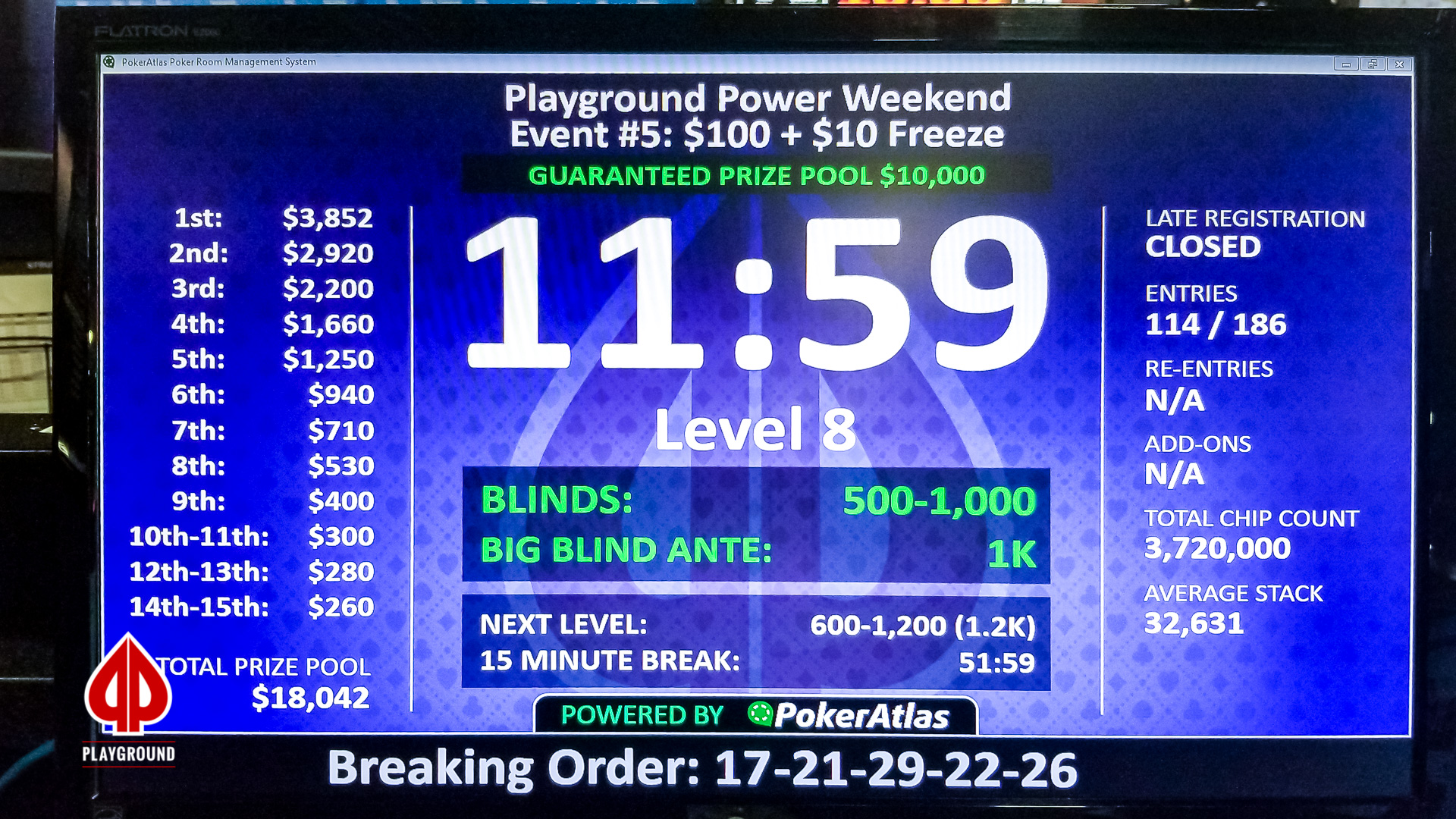 The late registration period has come to a close and the total number of entries has reached 186 players, almost enough to double the $10,000 guaranteed prize pool (the prize pool payouts will be listed shortly).

Taking a look at the chip stacks during the break we see that with an average stack hovering just below the 30,000 mark, Jean-Francois Laramee has taken the lead nursing a healthy 84,400 tournament chips. There were a few other players that managed to amass stacks above double the average which can be seen on the leaderboard:

In level six there are now 172 entries and the players keep arriving and filling up the seats. The tournament needed only 100 players to hit the $10,000 guaranteed prize pool, so, who knows how high it will get to? Late registration will remain open until the start of level 7 at 9:15pm, so there is still  time to jump into the action and see if you can be crowned the September Power Weekend Event #5 champion!

There will be a break in a few minutes which will give us the time to put together the first leaderboard of the night.

Here are some of the players who are currently seated at the tables: