It didn’t take long! After less than 30 minutes of heads-up play, Ginette Langlais became the September 2019 Power Weekend’s Women’s Event champion! Congratulations to her and her excellent runner-up Louise Brouillette.

Both played a fantastic final table, but it was really Ginette’s game from start to finish, having gobbled up the chip stacks of a few of the women at the final table early on and never looking back. Ginette’s first place finish earned her $1,642. Congratulations! 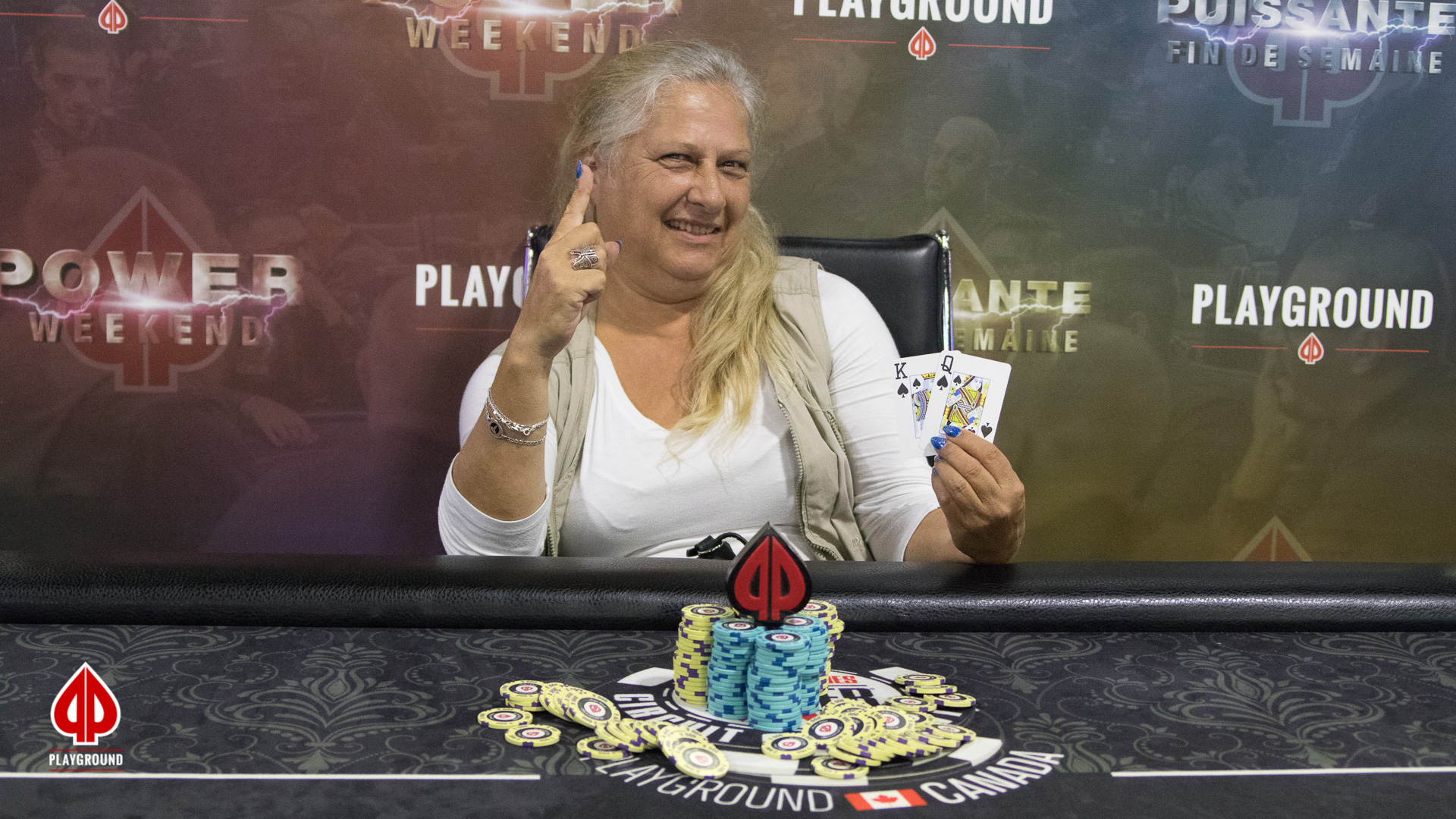 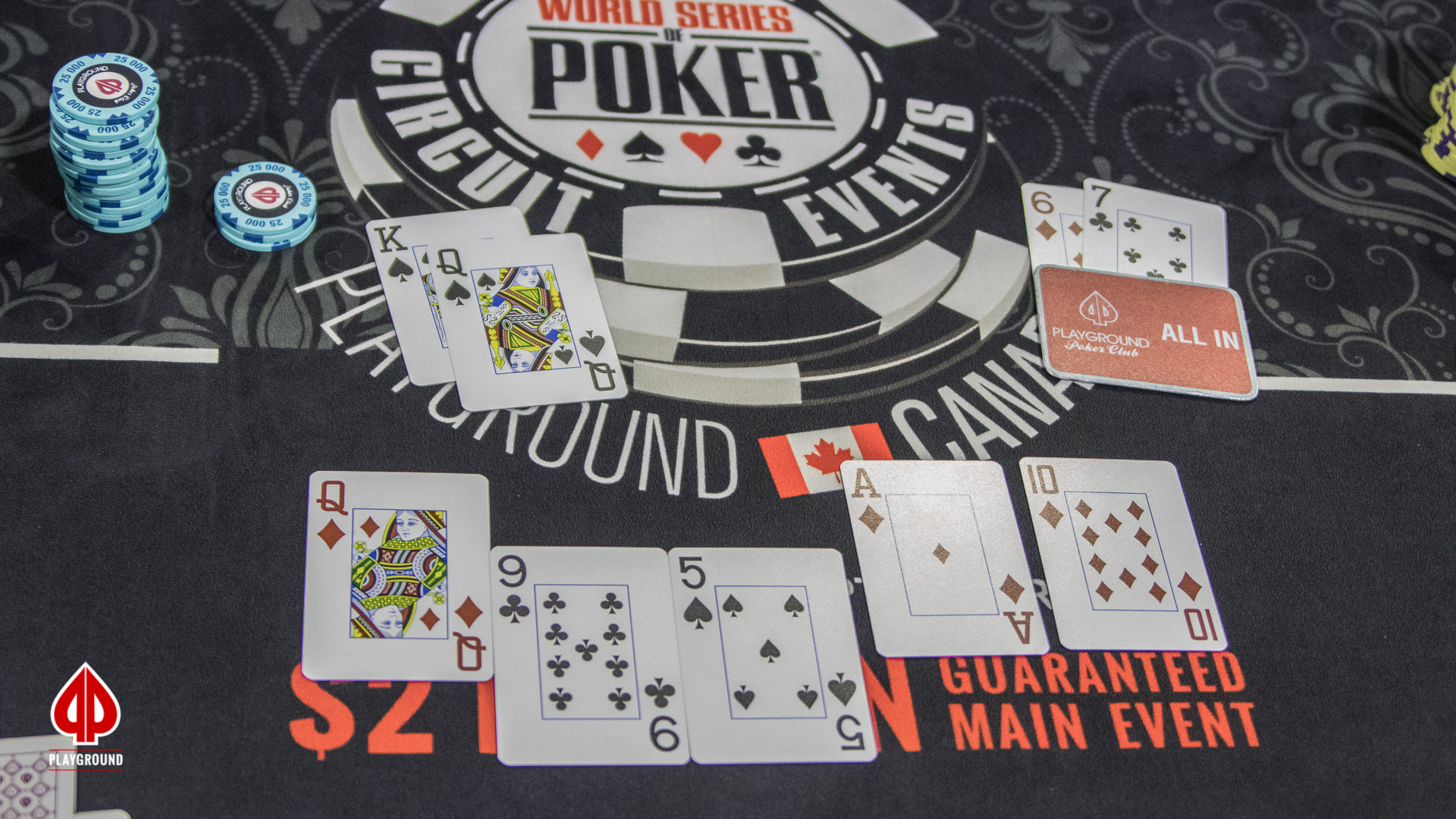 The final hand was a classic preflop shove, with Ginette leading the way and Louise calling shortly after.

did not fare well against Ginette’s

. Either way, it was a convivial and spirited tournament from start to finish, with laughter and good cheer present throughout. That’s why it’s no surprise that the runner-up was happy to pose with the winner! Win or lose, we’re all friends here at Playground.

With her second place finish, Louise earned herself a healthy $1,395. Well done! 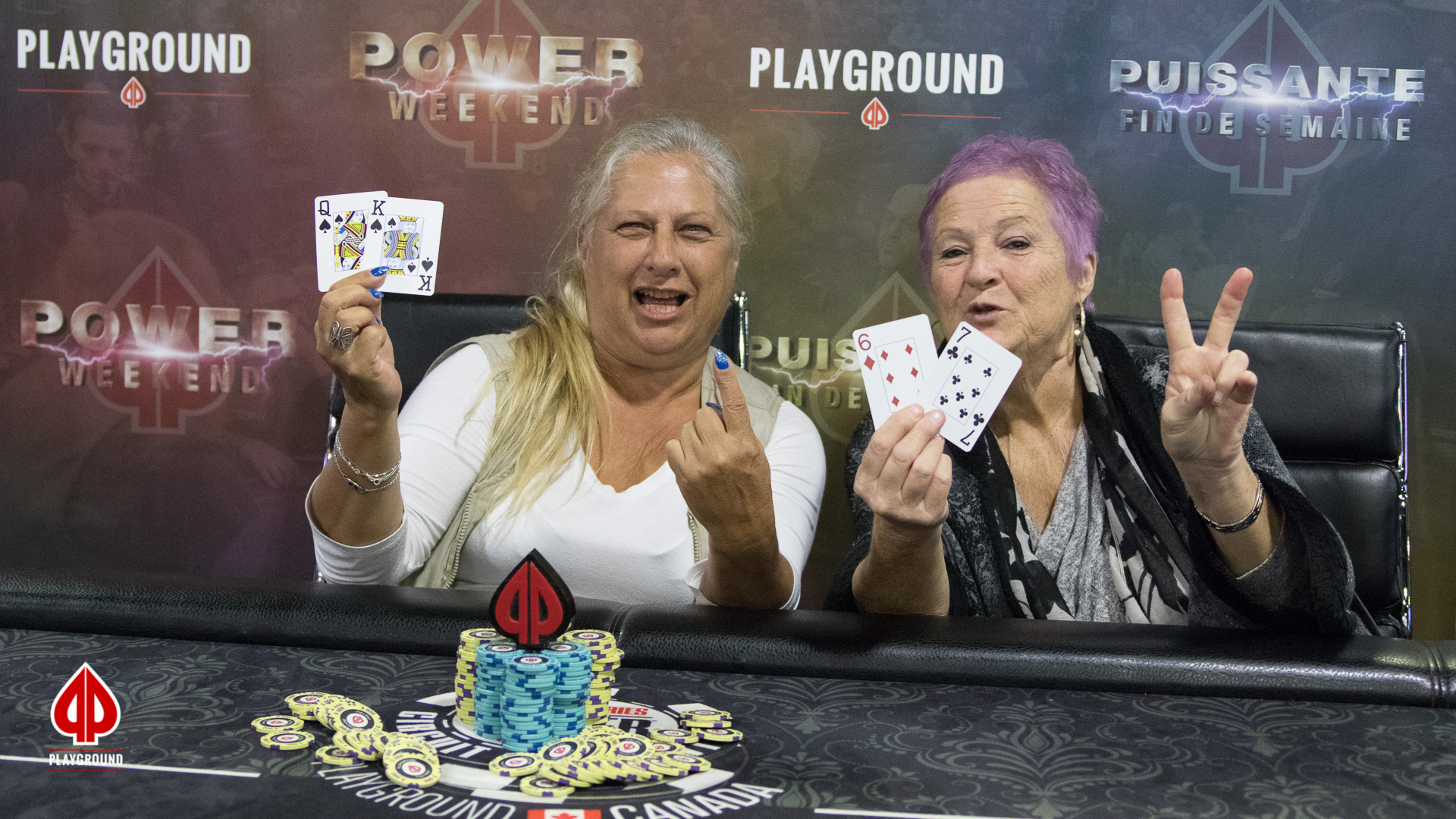 It’s down to the last two ladies of the evening: Louise Brouillette and Ginette Langlais. Who will come out on top?

We shall soon see!

After slowing bleeding out to the rapidly increasing blinds, Shaw-Ying Chaw finally found herself with too little left to continue. She was forced to shove preflop with a decent hand, a

. Lori Sanderson called with a

and ended up winning when the board was dealt

Shaw-Ying finishes in fourth place and collects a prize of $800.

And on the very next hand, Lori Sanderson, who had just eliminated Shaw-Ying, was eliminated herself. She finishes in third and takes home a prize of $1,040. Not bad for a day’s work!

Fresh off the heels of her elimination of Brenda Blackburn, Ginette Langlais just reduced the field by another player. This time it was Patricia Messier.

The hand started with three players each contributing 40,000 chips to see the flop, which came down

. When it was Patricia’s turn to bet, she simply shoved all in. Ginette, the chip leader at the table by a wide margin, instantly called. The other player in the hand folded.

Patricia was looking down the barrel of an open-ended straight draw, but it wasn’t meant to be. The turn and river were dealt

, with Ginette’s pair of jacks taking down the hand. Congratulations to Patricia for her seventh place finish, earning her $350.

Players are now on break.

Brenda Blackburn knew she had a huge opportunity when she saw the pair of kings in her hand, and so she made a fairly large preflop bet of 100,000. The table folded around to the player on her right, Ginette Langlais, and it was go time. She shoved.

It seemed the perfect time to make the call, but Brenda took her time thinking about it. Did Ginette have pocket aces? Ace-king? In the end, Brenda liked her chances and did just that, making the call the ultimately ended her night.

While all Ginette had was an ace-ten, she ended up catching an ace, ending Brenda’s night prematurely and sending her to the rail in eigth place. Congratulations on a tournament well played, you certainly eared that $270 – better luck next time with those kings!

Congratulations to Xiaoshu He for finishing in ninth place. Xiaoshu doubles her money on the night, taking home a respectable $210. We’re sure she wanted to last a little longer, but in the end, somebody’s got to finish in ninth!

Below are our final nine players in the Women’s Event presented in their seat order. Good luck to all!

Lori Sanderson has been on a small run lately, doubling up twice over the course of just a few hands and taking down an opponent in the process. 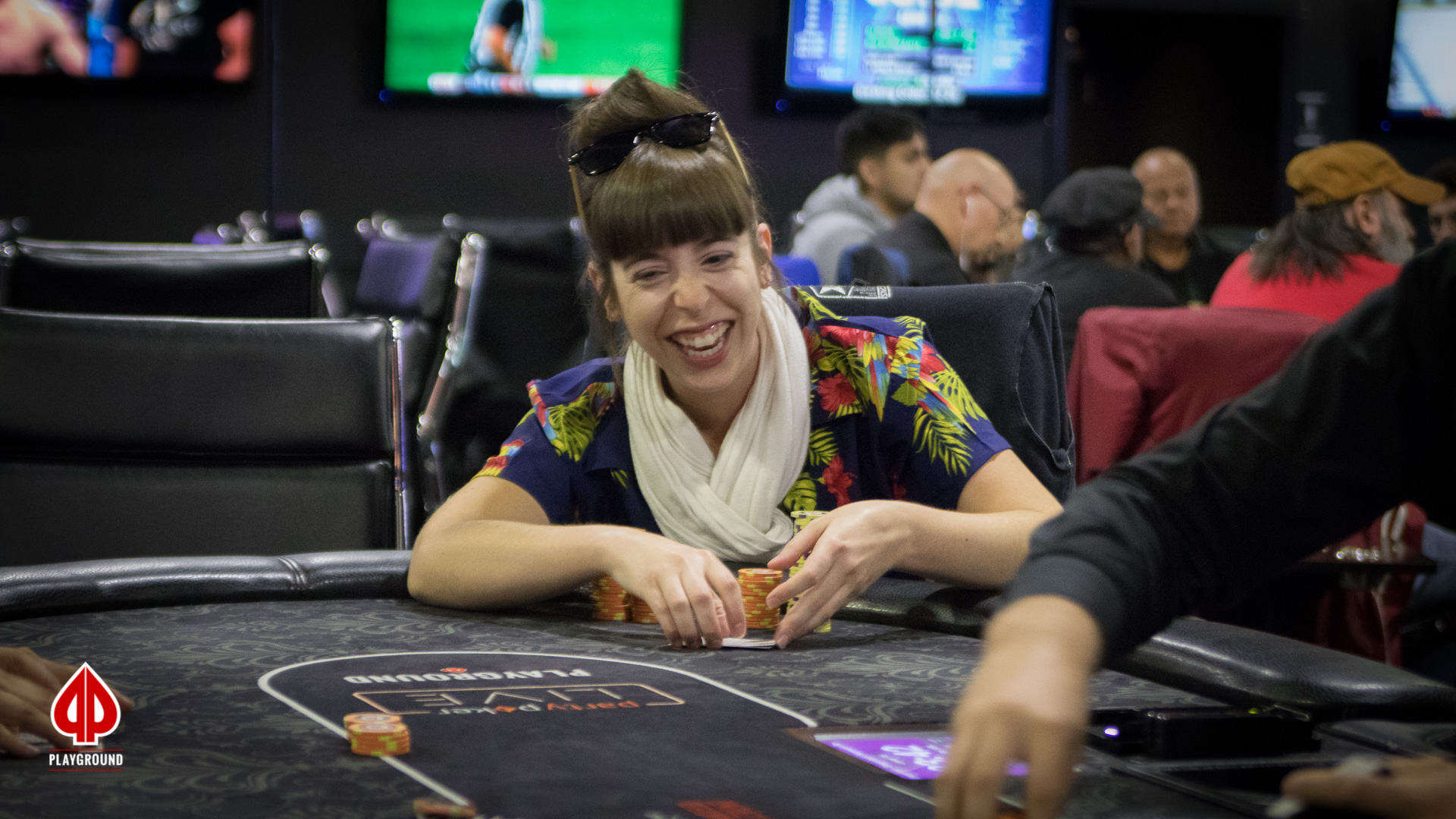 With only 14 players remaining, she found herself facing off in an initial heads up all-in battle versus Melissa Milette. Both players had pushed their chips into the middle preflop, with Lori holding a pocket pair

. The flop came down

which spelled the end of Melissa’s night. The pair of tens didn’t just win the hand, they also precluded Melissa from making a ten-high straight.

A couple of hands later Lori found herself up against Manon Langlois, having been willing to call Manon’s 40,000 chip bet in order to see the flop, which was dealt

. Again Manon led out with another healthy bet. Lori thought about it for a bit, and then shoved over top. Now it was Manon’s turn to think.

Manon asked the dealer for a chip count of Lori’s stack, which turned out to be 109,000. Throwing caution to the wind, Manon called, easily covering Lori. The two players flipped over their cards. Lori had a

. They both had high pair, but Manon’s kicker ended up being significant later on.

The turn came down a

and the river was a

. Each had ended up with two pairs, jacks and kings, but Lori’s

helped her take home the bacon, helping her to quadruple up in just a few minutes. She now sits in a great position heading into the final table.

Note: While we were writing up this hand a further three players were eliminated, and the final table has now been seated.

While this event is far from over, Manon Langlois has taken over the lead from Kathy Sawers – but just barely.

With only 20 players remaining in the tournament, the Women’s Event is starting to heat up and get serious. And while the remaining players are all still in great moods and continue to laugh and joke, there are likely a few short stacks that won’t be laughing soon, as the blinds have them cornered and under pressure. When the women return from their break, the number of participants is likely to shrink in a hurry. 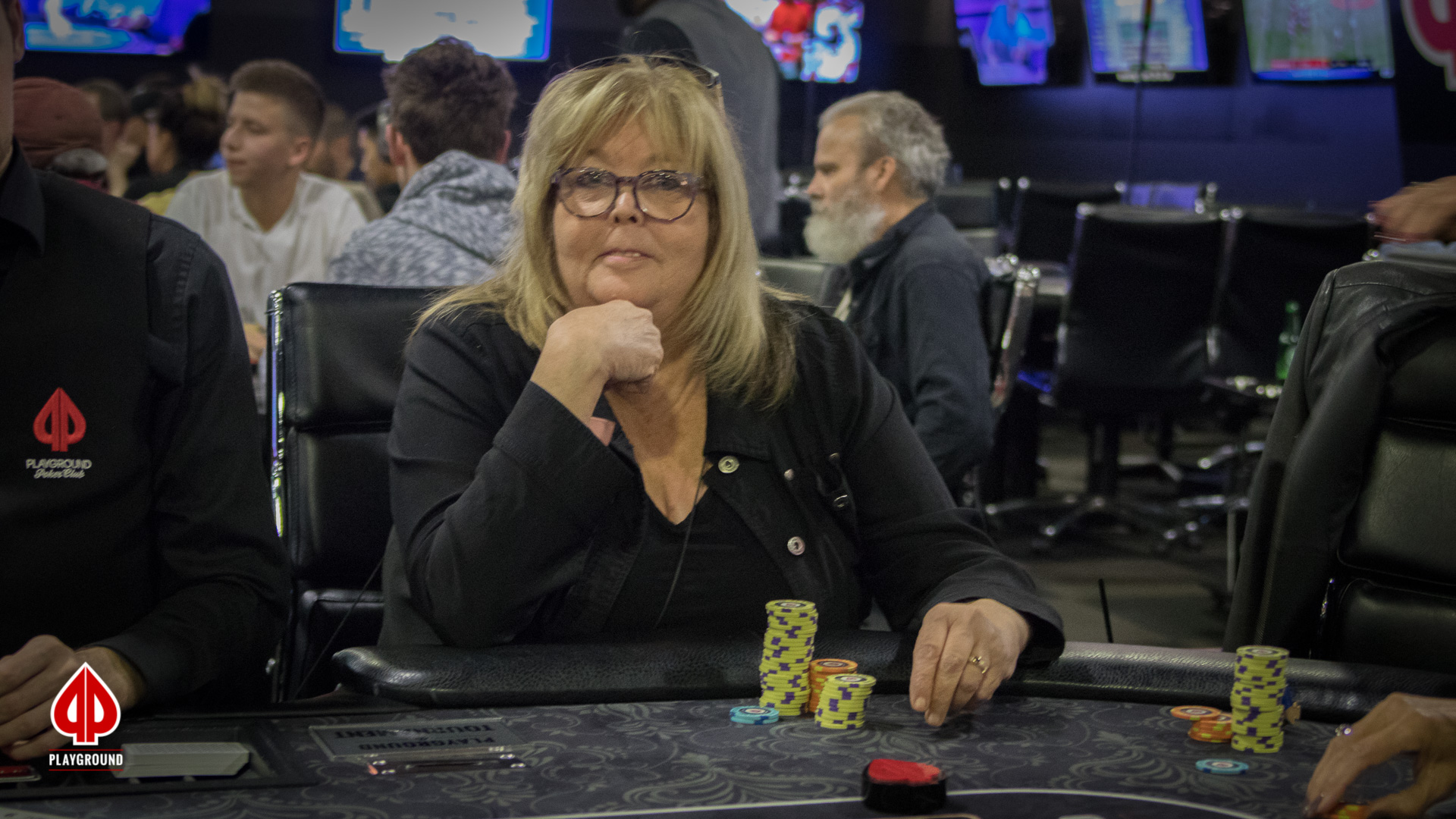 On table 35 just now Danielle Bonin decided to lay down the law from the small blind after seeing five players try to limp into a hand with the minimum bet. When the action came back around to her, she quintupled the bet from 4,000 to 20,000. Only one other player decided to they had the cards to stay.

After the flop was dealt

, she wasn’t finished by any measure, firing another 20,000 chip bet. This time it was too much for her opponent, who (wisely?) laid down her hand. Play continues, as the group has now been reduced to just over two dozen players. 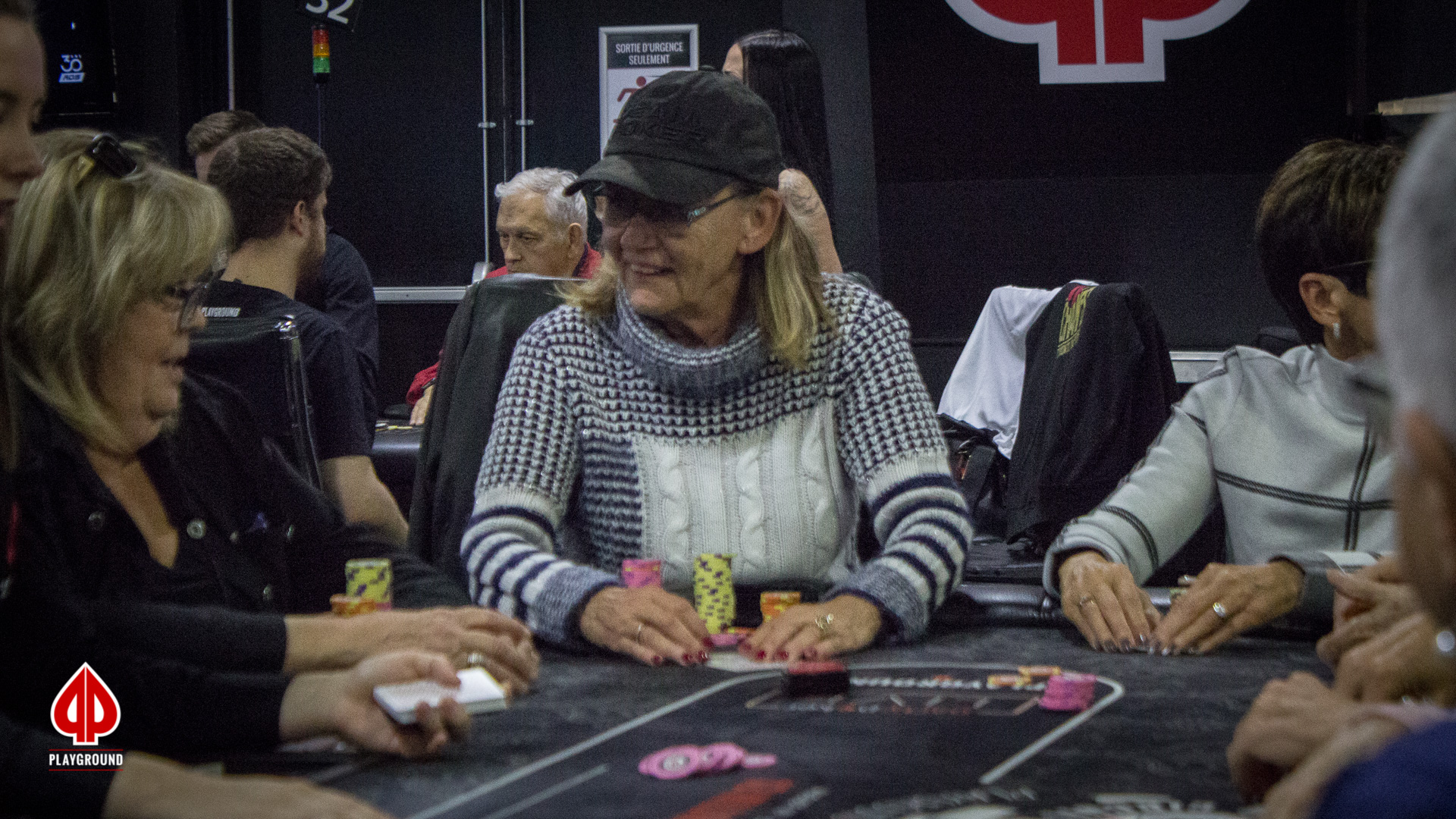 The $100 + $10 Women’s Event is down to it’s final three tables, and it’s getting rowdier by the minute as the wine continues to flow and laughter and shouts are beginning to become more frequent. The women are in it to win it, just like the men are – they only difference is that they’re having more fun doing it.

Below are a few shots of our remaining competitors.

Boasting an impressive 139,500 chips, she has almost triple the chip average and stands head and shoulders above the rest of the crowd. Only two other players have managed to even stack more than 100,000 to this point, so Kathy’s achievement is all the more noteworthy. That said, there is plenty more poker to play!

Well done Kathy, keep it up! Good luck to the rest of the field as well. 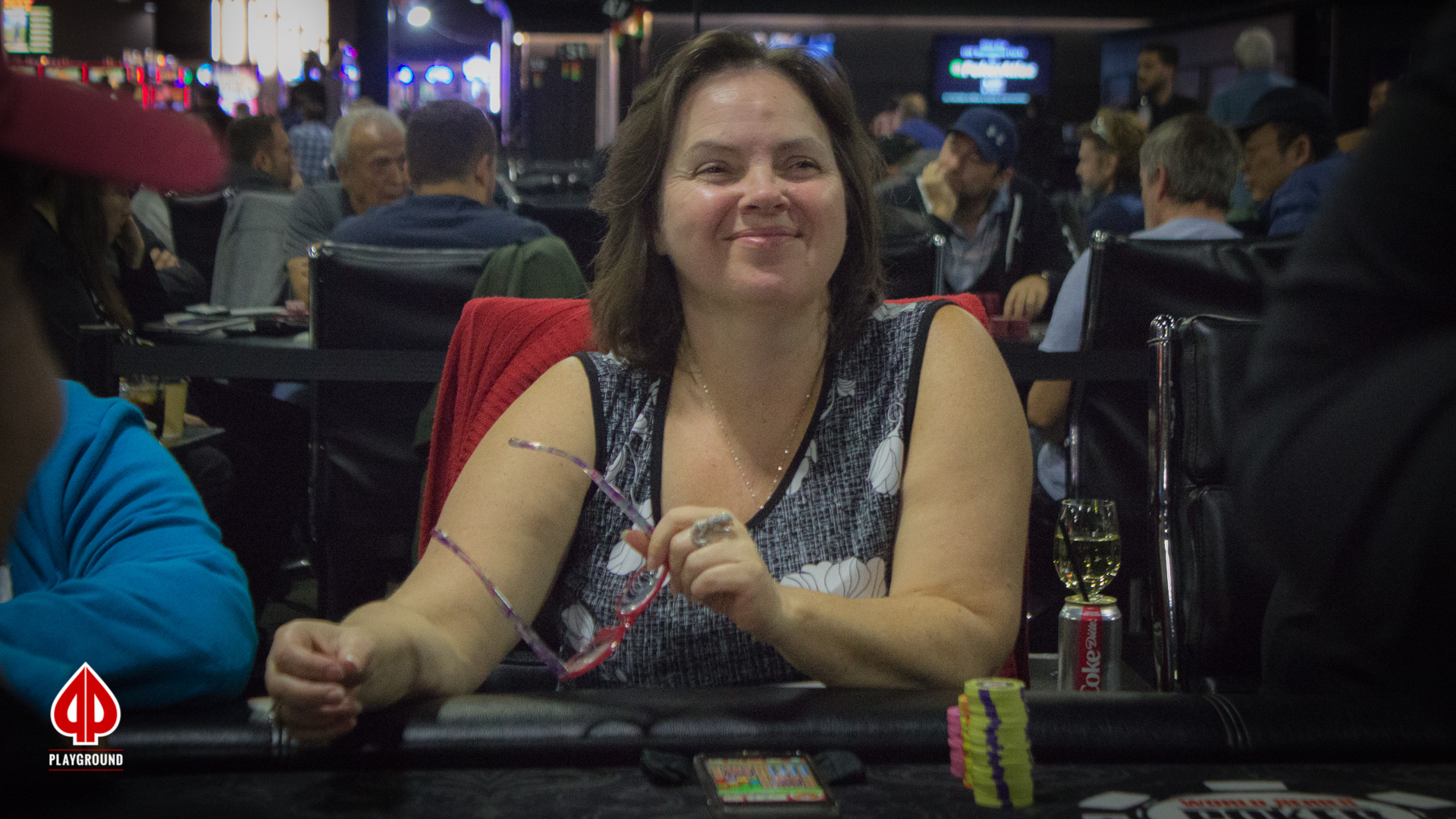