Event #2, $150 + $20 + $50 PLO Bounty Re-entry tournament was a fun filled tournament, with plenty of action for the usual suspects who love to play poker with four cards in their hand. When late registration came to a close, there were 44 entries (including 10 re-entries), allowing the prize pool to go way above the original $6,000 guarantee.

Ron G. loves to play PLO, however when he started on the final table, he had the second lowest stack. He knows the game well and was able to start to build up his stack, as he watched the eliminations on the table take place. After losing Alphonsus Kiwook Yoon in third place, play went heads-up between Arthur W. and Ron G., and with both players having almost the identical chip stacks they asked the floor to pause the clock to allow them to discuss a deal. Ron G. had 569,000 chips, and Arthur W. had 531,000. The ICM numbers would give $1,820 to Ron and $1,790 to Arthur, with $190 left in reserve for the eventual champion. Both players agreed to the deal and also decided to hold on to their own bounty chips, adding another $50 into each of their pockets.

Play only lasted a few hands before the two players put all of their chips into the middle. 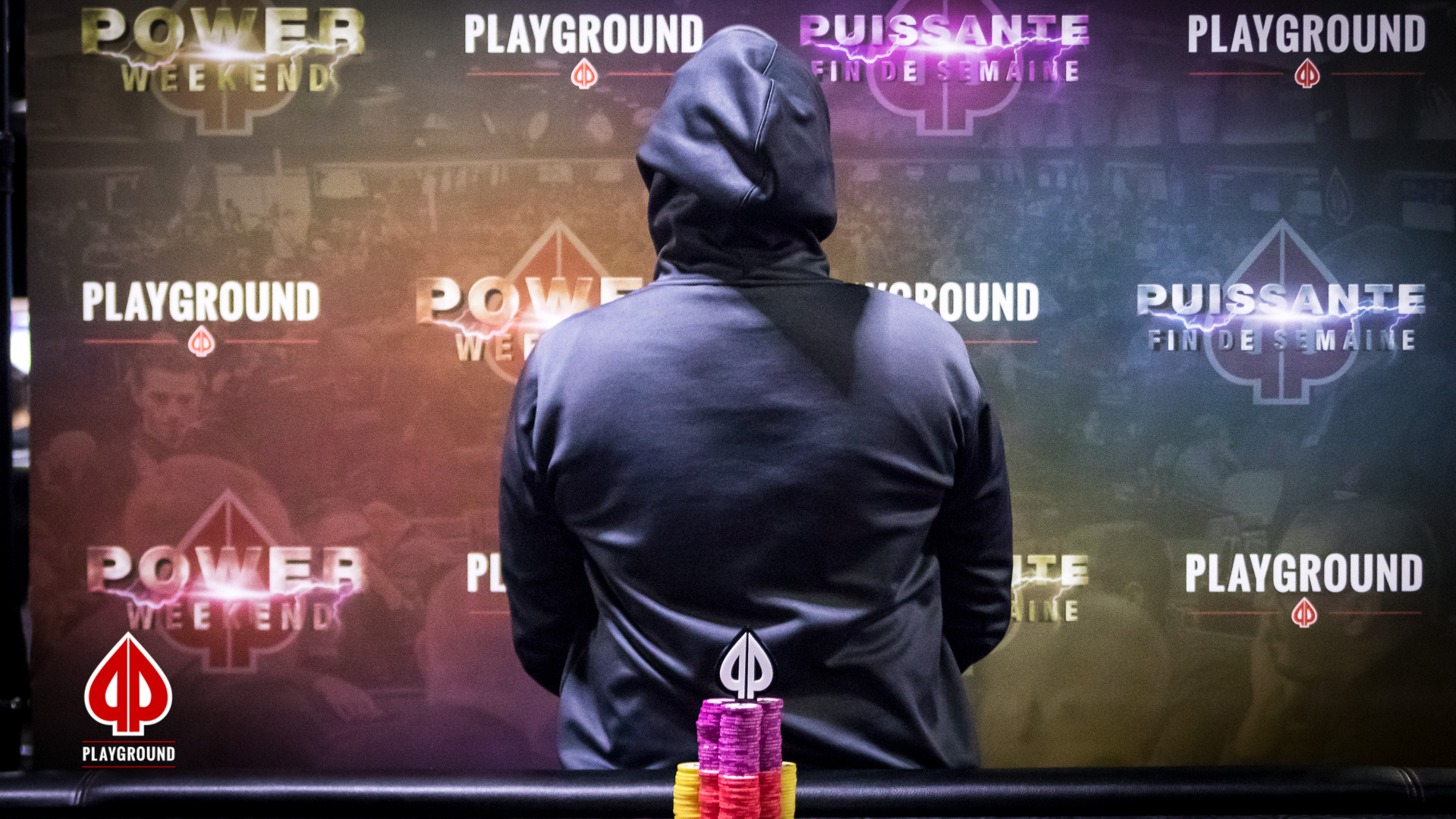 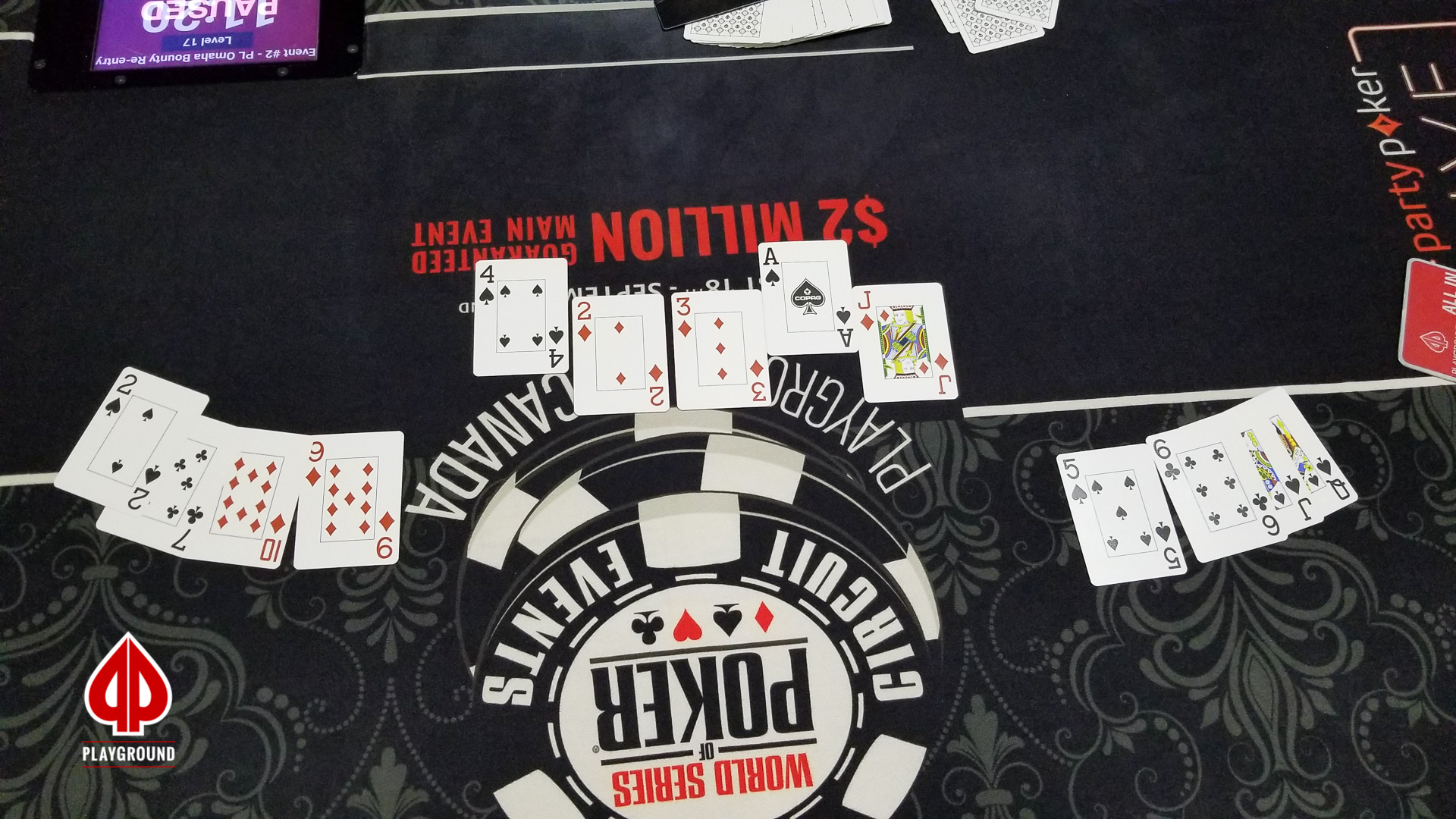 Mathieu Arseneau played well and was the chip leader going into the final table. After a few missed rivers, his stack had dropped but he did mange to make a nice double up. None the less, it wasn’t enough. When he finally picked up a decent looking hand, he potted all in and was called by Arthur W. and the cards were tabled.

The board run-out was

and Arthur scooped the pot while Arseneau finished in fourth and picked up his payout slip for $700 (plus bounties).

Alphonsus Kiwook Yoon was in second place as the final table started, and he kept playing his game until the poker gods decided that his time had come to an end. He was sent to the rail in fourth place, collecting $1,040 (plus bounties).

Ryan Garonce played a great game tonight and was in the top spot for much of the evening, but ultimately succumbed to falling in sixth place for $320 (plus another $50 bounty chip from the bubble deal, as reported in the previous post).

Brian Morgan was also sitting on a dominating stack for most of the evening but he ran into a cooler just after the final table was formed, and did his best to survive as long as possible, but unfortunately, his night came to an end in fifth place, collecting $470 for his efforts.

After Stefan Siveski left in ninth place and Patrick P. busted in eight place, the players were on the bubble as only the top six spots were to be paid. There was some discussion about making a bubble deal, and, the players finally agreed to the following arrangement: all players put in a bounty chip, and six bounty chips would go to the player who was the next to exit (seventh place), with the seventh bounty chip being added on to the sixth place prize, so instead of $320 for sixth, there will now be a total of $370 for the sixth place finisher.

After the deal was made, Mathyeu Provost ended up being the unfortunate soul busting out on the bubble, collecting six $50 bounty chips (in addition to any other bounties collected throughout the night).

Not long after Brestovak managed to secure a double-up, as fate would have it, he bubbled the final table. There were also some swings on the other table that took place that saw chips move from one player to another. The new leader is now Mathieu Arseneau, followed by Alphonsus Kiwook Yoon and Ryan Garonce.

Here are the finalists along with their chip counts:

The action has slowed down now that there are only 10 players remaining, with the final table being played once one more player will be sent to the rail. Ryan Garonce and Brian Morgan still have dominant stacks, and Mathieu Arseneau is also in a very healthy position.

Goran Brestovac usually knows how to make it deep in these events but he has had a lot of pressure on his stack that has been dwindling down over the last few levels. Brian Morgan raised it up to 6,000 and received calls from Ryan Garonce as well as Brestovac who was in the big blind. The flop came

and without hesitation Brestovac moved his remaining chips into the middle. Morgan folded and Garonce grinned knowing that regardless of the cards, the all in was only for 12,300 meaning that he pretty much had to make the call and hope that he might take it down.

were of no help to Garonce and Brestovac has managed to stay alive and add a few chips to his stack. 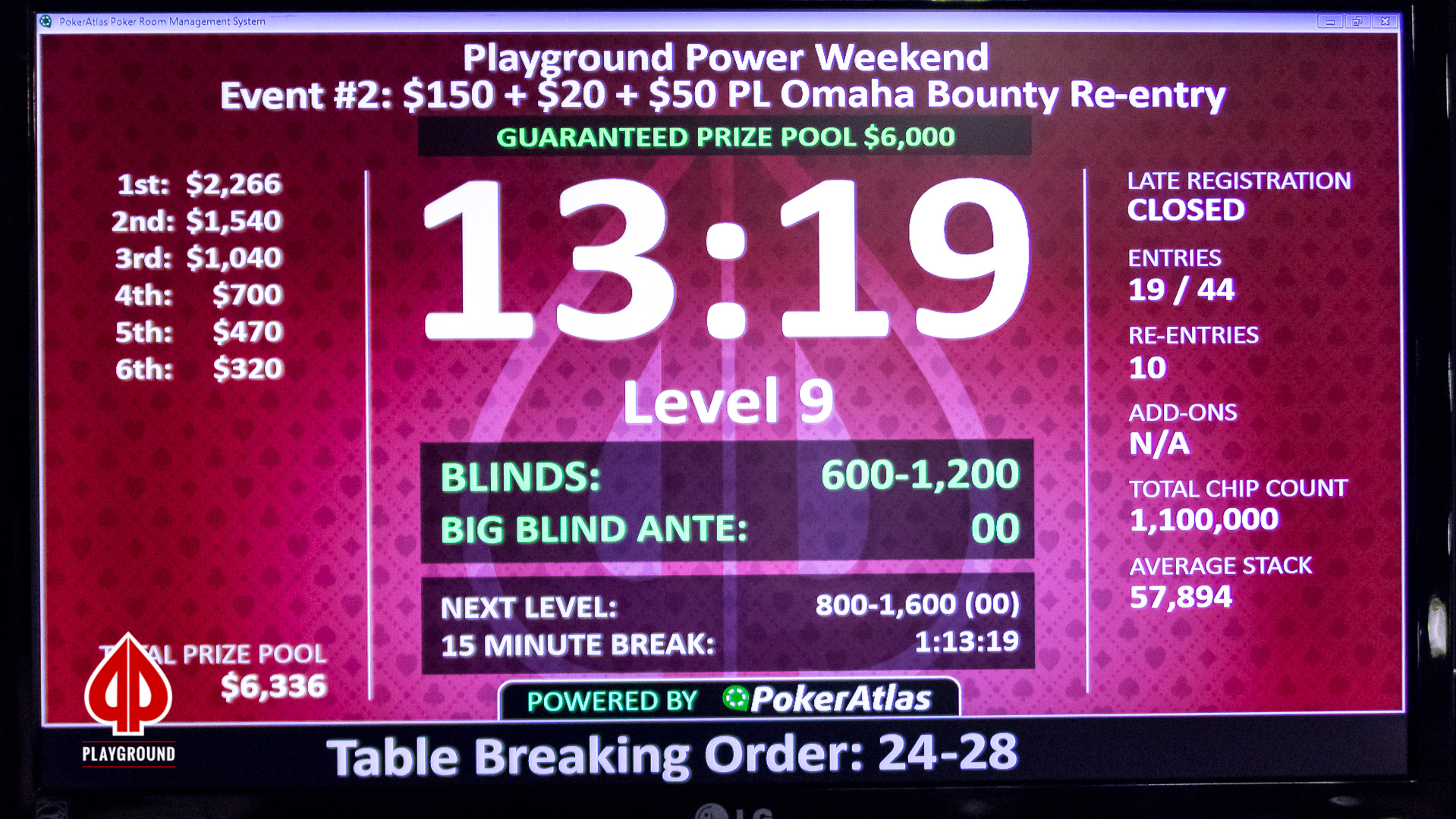 Late registration has finally closed and the total number of entries was able to climb to 44 players (including 10 re-entries), making for a nice prize pool (the prize pool will be posted in a short time).

Looking around the room, two players who are good friends of each other are neck and neck for the lead, Ryan Garonce on table 20 is in the lead with 117,100 chips, followed closely by Brian Morgan on table 28, sitting on 116,200, only a few chips behind Garonce, The battle for second and third is also tight with Mathieu Arseneau in third with 74,400, and Arthur W. right behind in fourth with 73,200.

With still another 40 minutes left in the re-entry and late registration period, there are now 35 entries (including 5 re-entries) which means that the tournament has now surpassed the $6,000 guarantee!

On table 20, Ryan Garonce limped in under the gun and was joined by Martin Dyotte in the cut off position, only to see Diego Aguilar announce “pot.”  Both Garonce and Dyotte made the call.

and Garonce checked, followed by a bet of 7,500 by Dyotte. Aguilar then potted all-in, forcing Garonce to shake his head as he mumbled “really? On my first hand?”, which then resulted in a fold. Dyotte made the call, and right away Aguilar said “good call, I’m not that strong”!  Dyotte replied “me neither, but I think I am good”. The hands were opened:

Aguilar had a draw and Dyotte had top pair. The turn was the

and the river was the

, and the dealer shipped the pot to Dyotte. Aguilar was still left with chips but as this post was being written up, Aguilar was seen walking over to a cash table as he must have busted out a few hands later.

The first break of the evening is coming up shortly which will give us a chance to put together the first leaderboard of the evening.

The players are now in level three and the field is up to 24 players, so that means there is good value to be had as the prize pool has a guarantee of $6,000! Late registration is open until the start of level 7 at 10:15pm so if you have been thinking of joining the action, the bridge is clear, come on down.

Here are a few photos from some of the players currently seated at the tables:

Attention four card players: Event #2, the $150 + $20 + $50 PL Omaha Bounty Re-entry tournament is starting! Players begin with 25,000 chips and play through 20 minute blind levels, with late registration and unlimited re-entries available until the start of level 7 at 10:15pm. There is a $6,000 guaranteed prize pool and included in that is a $50 bounty for each player that you are able to knock out, which always makes for a fun evening of poker.

The cards are being shuffled up and dealt so it’s time to come down and take a seat and see if you can become the PLO Bounty Re-entry champion of the September Power Weekend. 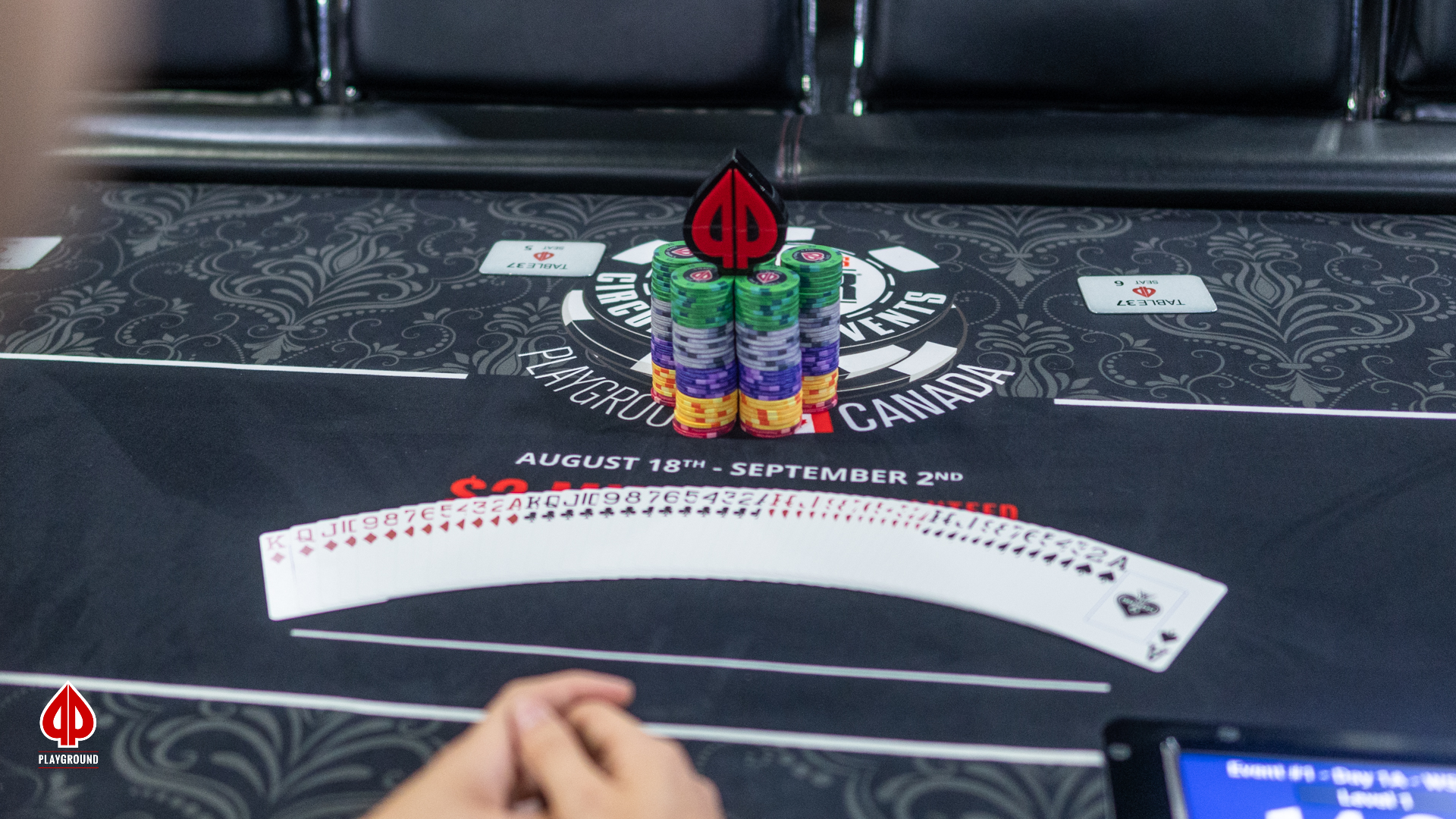