Last Friday at the Aria in Las Vegas, the Global Poker Awards ceremony recognized some of the most influential people in poker. Although we all knew that William Foxen and Kristen Bicknell were receiving their Player of the Year (POY) awards, many more winners were yet to be revealed. 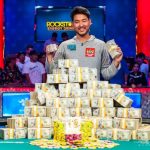 The World Series of Poker Main Event, the iconic poker tournament that crowns the World Champion every year, was at the forefront of the ceremony. The tournament itself received the Event of the Year Award, while John Cynn, winner of the event, won the Tournament Performance Award. Cynn’s performance was no small feat: he bested a field of 7,874 players to take down the $8,800,000 first prize and the title!

Playing with John Cynn at the final table was Joe Cada, winner of the 2009 WSOP Main Event. Cada came really close to becoming the only player in the post-Moneymaker era to win the World Series twice: he finished 5th. Moments later, he registered in Event 75, The Closer, a $1,500 buy-in tournament with 3,120 runners, and took it down! This sequence earned him a nomination at the Global Poker Awards for Moment of the Year, but unfortunately for him, Justin Bonomo’s win at the Big One for One Drop was a third Super High Roller victory in a row. That’s like Taxi Driver not winning the Oscar for Best Picture because Rocky came out the same year!

Doyle Brunson received the Award for Lifetime Achievement in Poker. Doyle’s legacy is unparalleled. He counts 10 WSOP bracelets, including 2 Main Event bracelets, wrote Super System – “the poker bible” – and its sequel Super System 2, and dominated the poker world for over 5 decades. 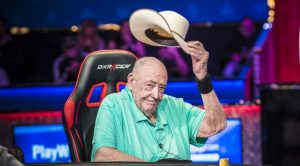 In 2018, he took everybody by surprise when he showed up at the $10,000 No Limit Deuce to Seven event at the WSOP. When Brunson got eliminated from the final table, the crowd applauded at length, knowing that this was the legend’s last appearance in a poker tournament. As he so often did, Doyle answered with his trademark tip of the hat, and the gesture was captured by acclaimed poker photographer Drew Amato. And that was the last moment of Doyle’s legendary poker career. Amato’s photograph (pictured on the right) was also nominated at the Global Poker Awards, for Media Content of the Year. To upstage his perfect shot and take the award from him, Lance Bradley had to write a whole book: The Pursuit of Poker Success.

Angelica Hael, Vice president of the World Poker Tour, received the Industry Person Award. She was nominated alongside colleague Matt Savage, Rob Yong, and other industry giants. When Angelica learned that she was nominated, she said: “I mean, look at that list. My odds of winning are minuscule, but I’m so stoked.” Not so minuscule after all!

Andrew Neeme is Vlogger of the Year. Maria Ho is Broadcaster of the Year. In total, 20 categories were presented. For a full list of nominees, winners, and clips taken from GPI’s Twitter feed, check pokernews’s article on the event.

Playground is proud to see so many of our partners and friends get recognized, and we cannot wait till MILLIONS North America to reunite with them all. Congratulations to all the winners!