Both Kevin Bergeron and William Molson had an excellent tournament, with Kevin amassing 5,495,000 chips over the course of the day to William’s 7,510,000. As soon as it was down to the final two, both players were happy to agree to a chop whereby Kevin would receive a guaranteed $20,450, and William $22,500. $2,500 was put aside for the winner, and we didn’t have to wait long to find out who it would be!

Exactly one hand in, Kevin opened with a bet of 475,000, which was raised by William to 1,400,000. Kevin shoved over the top and was called, and they flipped over their cards.

The board came down

, and William bagged the well-deserved win.

All told, William Molson comes away with a cool $25,000 for his efforts along with bragging rights for being the Playground 500 champion. Congratulations go out to him, the runner-up Kevin Bergeron, as well as everyone who came out to make this Power Weekend event such a great success! 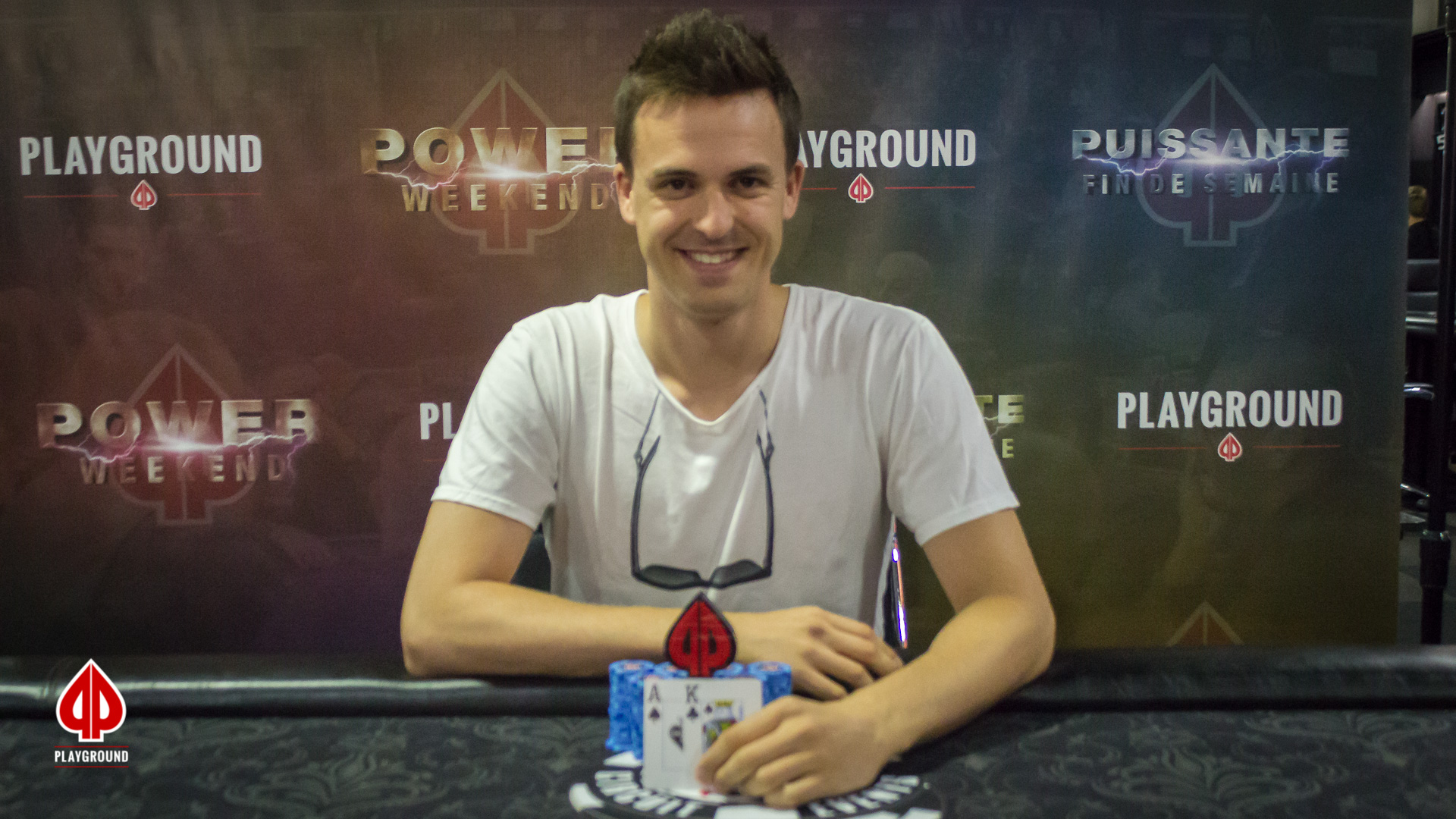 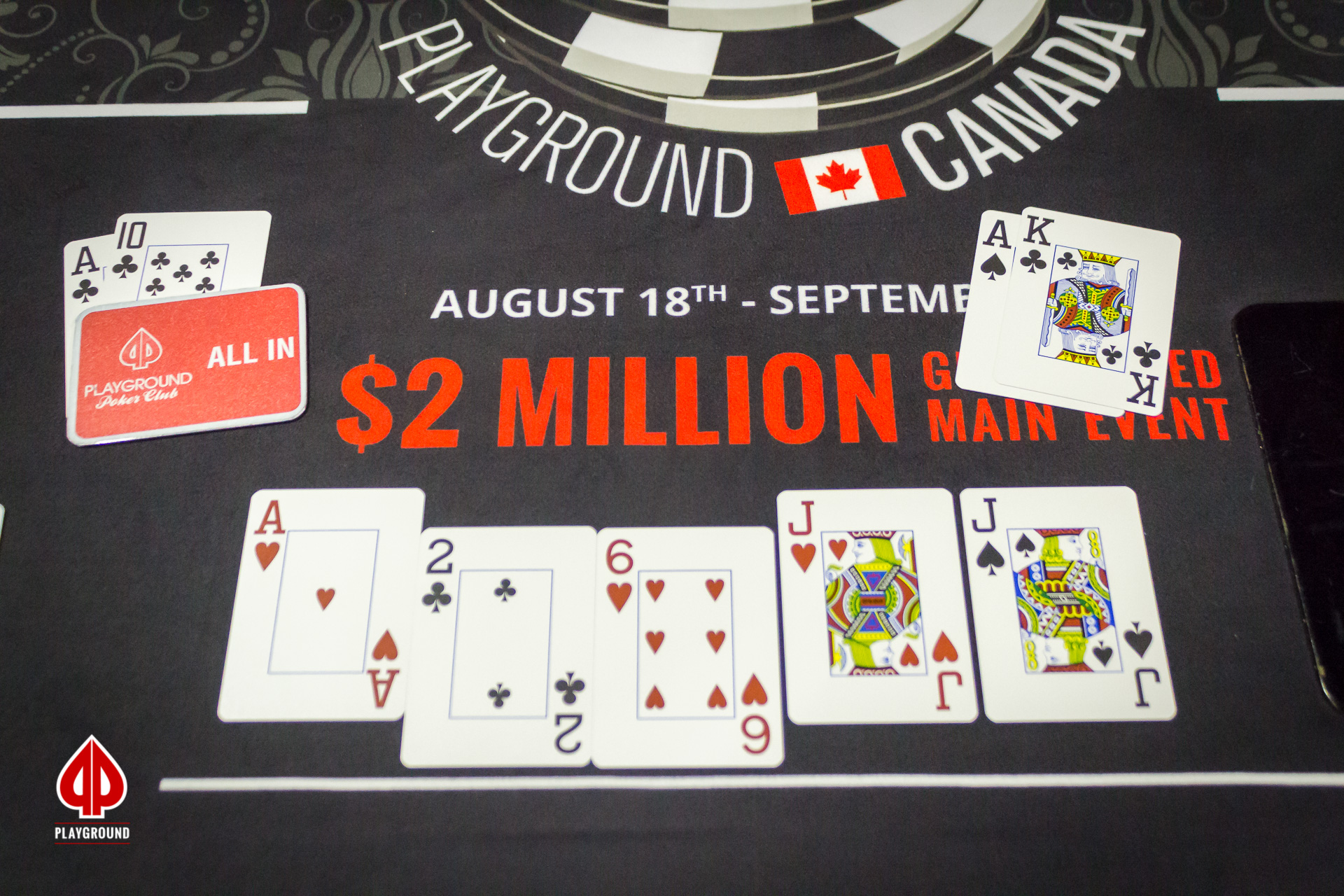 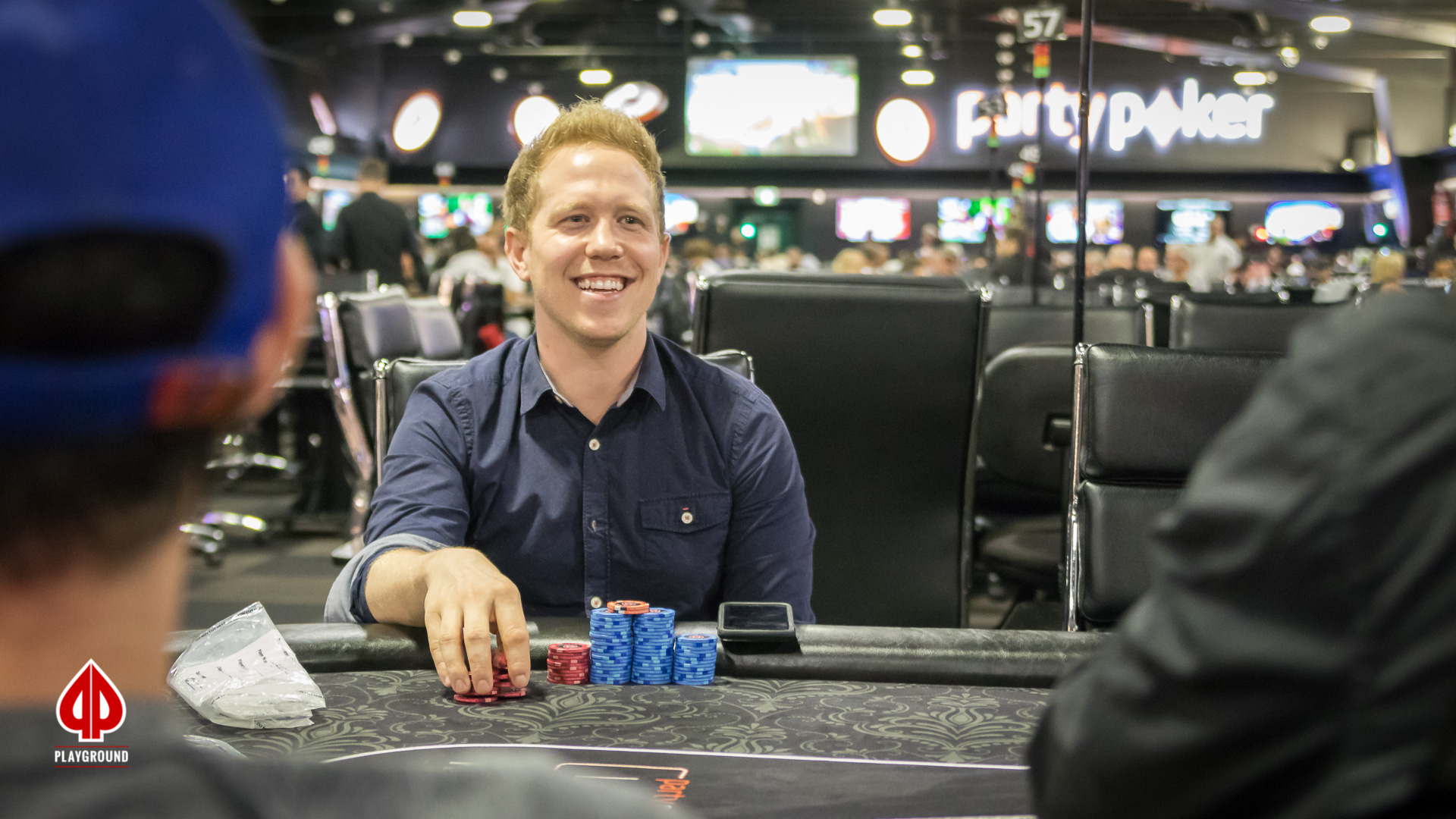 The $500 + $50 Playgruond 500 has worked its way from 260 competitors down to just two with the exit of John Rathbun, who was just eliminated in third place for $13,540. The final hand was an all-in preflop shove by William Molson from the small blind, and John’s

, as the board came down

Congratulations to John on a very well-played tournament, and good luck to our final two competitors!

Kevin Bergeron shoved preflop and was insta-called by former chip leader John Rathbun. We say former, because John has been doubling up players from his chip lead position all night, many times as the statistical favorite. This was to be another one of those times.

Both players turned over their cards, with Kevin’s pocket deuces facing off against John’s pocket nines.

The board came down

and both players jumped to their feet, both naming their preferred cards as the dealer flipped over the river. Kevin probably thought he was done, but miraculously a

came down on the river, saving his tournament life and doubling him up.

Now three-handed at the final table, this latest hand began with a button raise to 275,000 by William Molson. He was raised to 660,000 by John Rathbun, chasing Kevin Bergeron from the hand. After a short pause William decided to shove for his tournament life.

faced off against John’s pocket

, and at first it was all John. The board came down

, and he was close to making it a heads-up match. Instead, William’s prayers were answered as the

was dealt, making him a higher pair and saving his tournament life. He doubles up, and we move forward.

Goran Brestovac had a great performance and was near the top of the leaderboard for much of the tournament. He certainly earned his place at the final table. But luck was not on his side in the final hand, as he shoved over top of chip leader John Rathbun’s 250,000 raise.

He was quickly called, with John’s

After two hours of play there are only four players left at the table. Their chip counts are below. Players are on break.

With only four players left on the table and most of the chips in front of John Rathburn, William Molson ended up taking a huge piece of Goran Brestovac’s stack just now, leaving Goran with approximately a quarter million chips left. With the blinds at 50,000/100,000, Goran is now the player in the most danger.

flop showing, William shoved with pocket aces and was called by Goran’s king-jack. The turn and river were dealt

, no help to Goran. Play continues.

Tony Wong didn’t play many hands at today’s final table, as he was waiting for cards with a relatively low stack. Unfortunately for him, he was never dealt anything good to play with and was forced to shove from the big blind when his final turn came.

He flipped over a

and ran into none other than chip leader John Rathbun, who was holding a

. The board was dealt

and John’s straight made it curtains for Tony.

Kevin Bergeron has been playing well from his location, teetering on the edge of elimination. The latest hand saw him double up for a second time, this time thanks to chip leader John Rathbun. He’s still low on chips, but he’s in a better spot than before, no doubt.

The hand began with a 225,000 opening bet by John, which was followed by Kevin’s three-bet shove. The table folded around to John who snap called, and it was John’s

The board was dealt

, and Kevin lives to play another day!

Kevin Bergeron was able to fold his remaining chips enough times over the last few minutes to move up the leaderboard by one spot, thanks to the elimination of Thomas Rieger. Thomas ended up shoving preflop with pocket tens, but was overmatched by chip leader John Rathbun’s pocket queens.

We’re barely through one level and we’re almost down to five players. In the latest hand, the victim was Kevin Bergeron, who lost almost everything to William Molson.

The hand began with a preflop button raise to 135,000 from Kevin, which was then raised to 375,000 by William in the big blind. After a moment’s contemplation, Kevin shoved over top with an

and was called by William’s

When the flop came down

Kevin had a moment to hope for a flush, but the last two cards were no help. William doubled up and Kevin is presently on life support.

After only a few minutes of play, Jared McDonald has been eliminated in 7th place in the Playground 500. He collects a prize of $4,970. His last hand saw him go all in with a king-queen, and he was called by chip leader John Rathbun with an identical hand. The only problem? John’s hand was suited diamonds, and he caught the flush.

While it’s definitely not a bad payday for a Sunday morning, Jared’s exit is surely a disappointment. At least it was quick.