Yesterday, a little after 5:00pm, Lydie Stacey’s name was picked as the 6th of 10 participants to play Trick or Treat. A few pumpkins later, she was the happy winner of a brand new 2019 Buick Envision!

The goal of the game is simple. The game board contains twenty-five pumpkins; through a maximum of seven picks, participants need to collect three identical symbols from the game board to win the associated prize.

The game started. Lydie picked the first five pumpkins, one by one:

Lydie was off to a good start. At this point, she had to choose between ending the game and taking $250 in free play as her prize, or giving back two of the five collected symbols and pursuing with one more pick, while lowering her free-play prize if she missed. Of course, with two car symbols in the bank, it wasn’t much of a decision. She gave back both black cats, went to the board and picked… a witch! The witch is the symbol for a $500 prize. 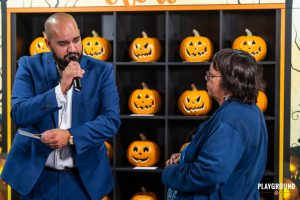 It was decision time again. Take $100 in free play or pursue with one last pick. There were nineteen pumpkins left. One of them contained a car symbol. She went for it, picked one of the low pumpkins on the right, and gave the envelope to the host. He opened it without checking inside, and presented Lydie with the opened envelope. She grabbed the card inside, slowly turned it around, and saw… you know it!

What followed was a pure moment of joy: both arms were thrown in the air and she let out a long scream, looking at her people in the crowd. You can watch the game and her reaction here on our Facebook page (Lydie is the 2nd participant in that video). Like the page to stay updated with all our EGD offerings.

When first approaching the game board, Lydie told our host she would celebrate with some wine if she won something big. Now she can pick a really good bottle.

Ten more participants will play Trick or Treat on Halloween, Thursday, October 31 – last day of the promotion. To participate in the draws, simply play your favourite EGDs at Playground from now until draw day and earn entries at an accelerated pace: one entry for every 50 points! And as Lydie Stacey would say, we’re not playing for candy! If you can’t make it, you can always look forward to our November promotion, which will bring the most interactive game so far: Bon Voyage! Game details coming soon.