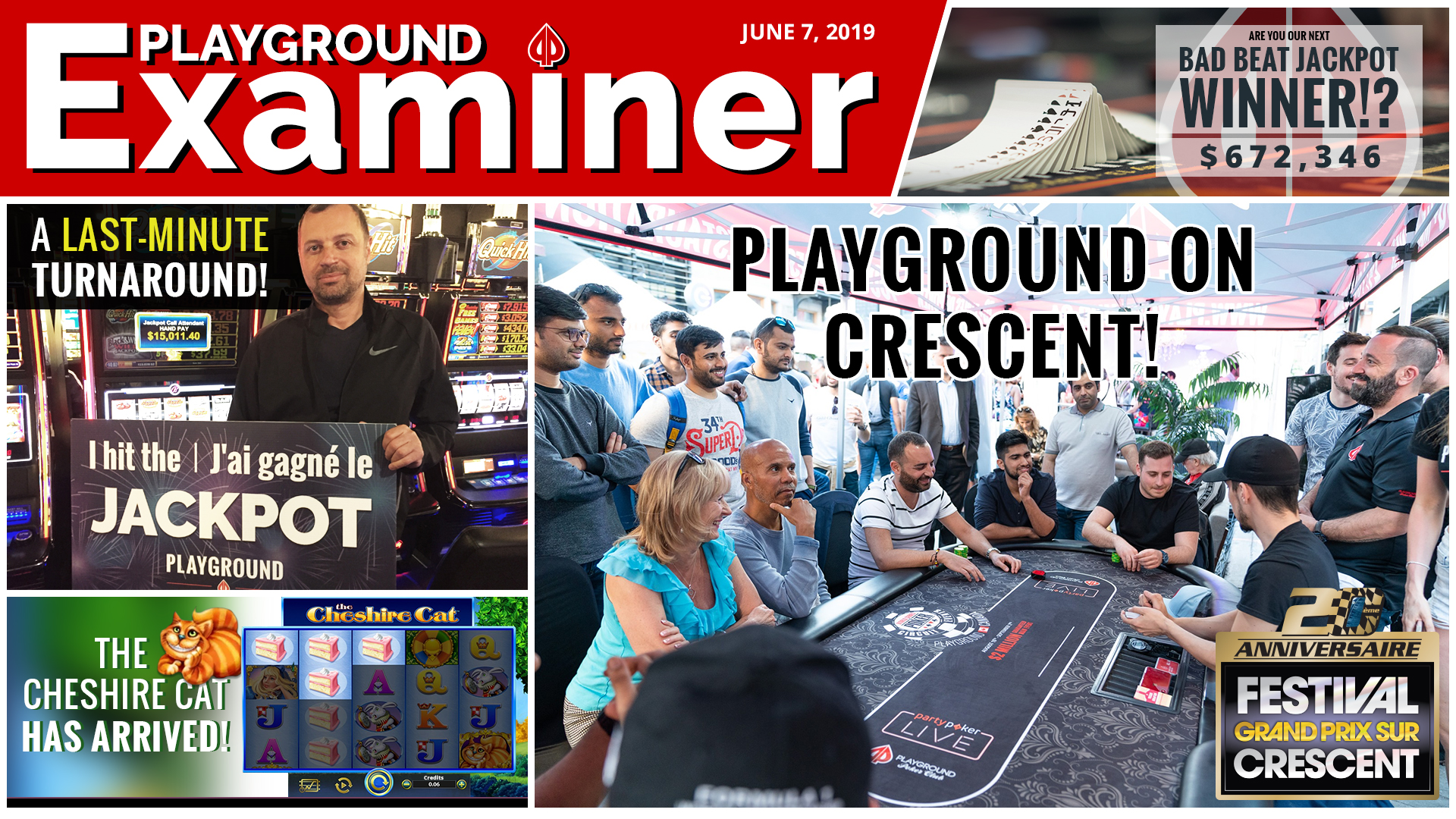 Playground is at the Crescent Street Grand Prix Festival! During the Grand Prix weekend, the whole street is closed down to host a three-day-long party and a number of companies have booths on the street to animate the crowd and reach out to the festival goers.

It is an immense pleasure to be at the heart of the most jet set festival in Montreal! In our booth, we have a very busy poker table where passersby can indulge in some face-paced sit n’ go action with fun prizes on the line: merch, La Ronde and movie passes, and more.

People are having a blast! Go check it out, and bring someone you know who has never been to Playground before. Signing up for the first time over there will get them $10 at The Rail and $10 in free play in our EGD section!

Last weekend, an amazing story developed in the Electronic Gaming section. On a beautiful Saturday afternoon, Christos F.  was enjoying himself spinning some Quick Hit reels. His session was soon coming to an end, as there were just a few coins left in the bank… or so he thought.

With $2 in credits left in the Quick Hit machine he was playing on, Christos got a bunch of free spins. These are sure to at least bring your balance up to a healthy state, but this bunch did much better. On the very last free spin, Quick Hit symbols invaded the screen, and Christos could not believe what he was reading: Jackpot Call Attendant HAND PAY $15,011.40.

And that is the way to turn a session around! Congratulations Christos!

A huge game has arrived! The Cheshire Cat, the fun character from the story Alice in Wonderland, brings its riddles to Playground’s Electronic Gaming section. The game is an absolute player favourite, and we’re very happy about the addition. The title is available on the floor right now, and is located in the new room at the far left of the section.

The smooth functionality of the game, the bright colours, the enchanting characters from a story that we all love, the mystery symbol, the Wheel feature, all play a part in making this game one of the most pleasant EGD experiences a player can have. Check out the game description by typing the name in the Games List search field, and ask an attendant to find it on the floor for you!

Playground’s Primary BBJ is one of the oldest promotions at the club and still to this day, one that leaves no one indifferent. Our poker cash games are running 24/7 and anyone sitting at a Hold’em table has a shot at the gargantuan amount displayed on our monitors.

Last night, on the sixth day of the sixth month, at 6:00PM, the amount had grown to $666,484. That is a lot of sixes! At 6:00PM tonight, the number will grow again, moving up to $672,346. To hit it, lose with Quad Jacks or better. If you do, you are the happy winner of approximately a quarter million dollars, and if you’re just playing in the room when it happens, no matter what stakes, you get a share! Click here to see how much. Where will you be the next time it hits?