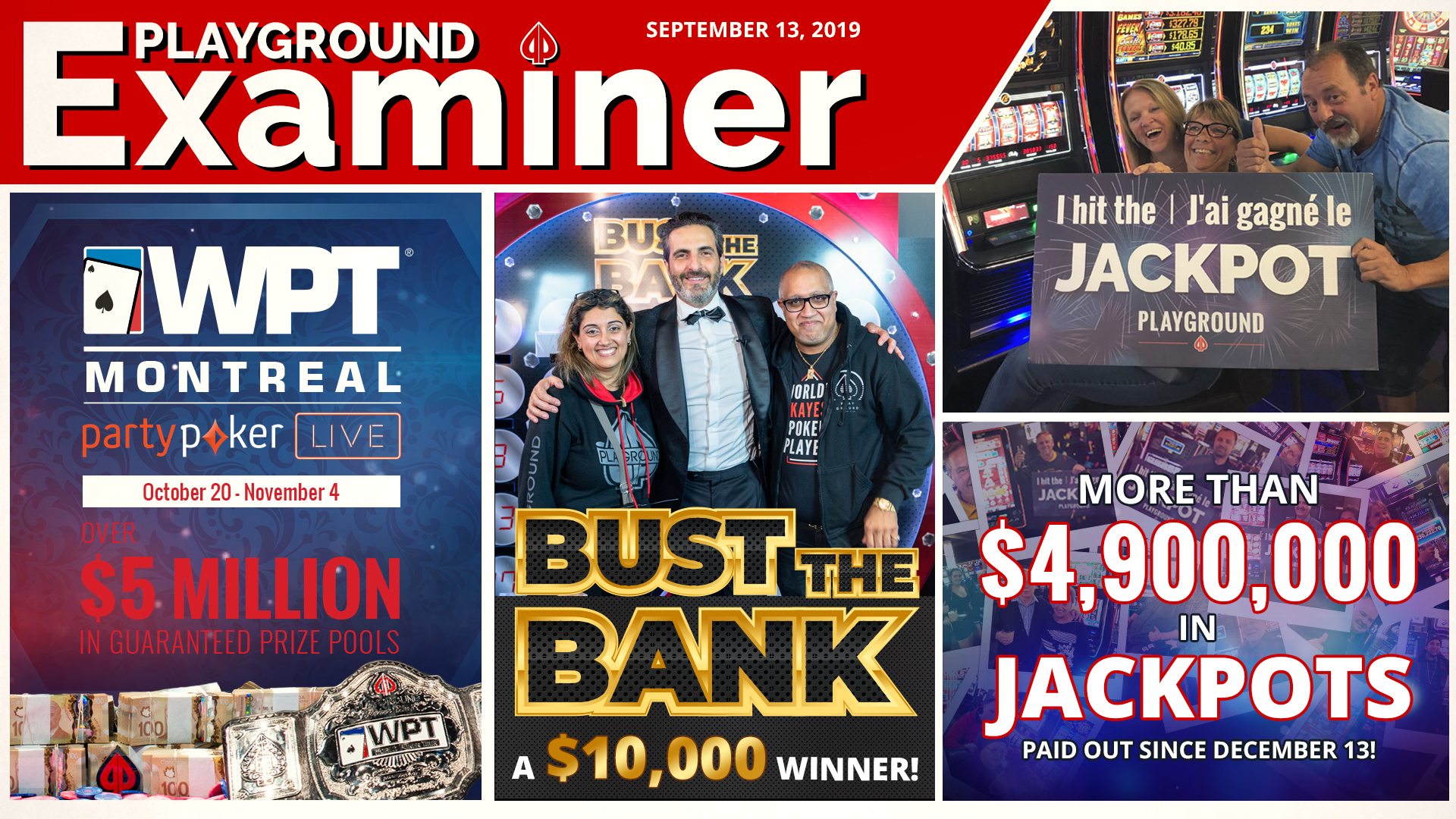 The World Poker Tour at Playground

From October 20 to November 4, the famous World Poker Tour will bring its poker tournaments back to Playground. The WPT Montreal is the longest-running event at our club, closing the festival year for the eighth time in 2019!

The series is comprised of seven tournaments, with buy-ins ranging from $220 (the Ladies event and the Caribbean Poker Party satellite) to $5,300 (High Roller). The CPP satellite guarantees three packages to the Bahamas that include tournament buy-in, expenses and nine nights at the Grand Hyatt Baha Mar for two people. A poker vacation in paradise!

Of course, the WPT Montreal also features the $3,300 Main Event, a prestigious tournament with a massive $3,000,000 guaranteed prize pool. The winner also takes home WPT Montreal belt. Make sure to come check it out!

Every Sunday in September, the Bust the Bank game board takes the centre stage in our EGD section. The board shows 20 envelopes: 10 containing the Playground logo, and 10 reading the word Bust. Participants open them one by one and try to catch as many logos as they can before reaching 3 busts. The more you collect, the higher your prize.

Last Sunday was the first game day, and a lucky lady won $10,000. She was one Playground logo shy of the $100,000 Grand Prize! The atmosphere was electric…

To participate, all you need to do is get picked in the weekly draws! For every 250 Rewards Points collected while playing EGDs, you get an entry into the Sunday draws – entries are accumulated five times faster on Tuesdays!

There are three Sundays left in September, and 10 winners will get picked on each of those. Don’t miss your chance. Play your favourite machines during the week, collect your entries, and Bust the Bank!

A great day for Jackpots

Thursday September 5 was a good day to shoot for a Jackpot in the EGD section. The right stars must have been aligned because Jackpots were aplenty! Let’s review two of them.

Quick Hit is a game that we offer in many variations: Quick Hit Pro, Quick Hit Platinum, Quick Hit 777 Wild Jackpot and a few more, including Quick Hit Black Gold Wild. That is the game Lynn was playing in the early afternoon. She was having some casual fun spinning the classic title when it happened: she hit a $7,511.10 Jackpot! We could describe her level of joy, but an image is worth a thousand words, so scroll up to the cover image and check out her entourage and herself posing for our camera after the hit!

The day was just getting started. A few hours later, one of our Fù Guì Róng Huá machines awarded an even bigger Jackpot. The device offers a choice between two games, both with beautiful graphics and dynamic playability: Eternal Lotus and Empress Gold.

Players love both, and especially love the fact that the games gave out some of our biggest Jackpots to date. At 8:25pm, a lucky lady was spinning Empress Gold at $1.76 a pop and unlocked a massive $20,281.61 Jackpot! The games on that machine offer four Jackpot levels: Mini, Minor, Major and Grand, and the Grand Jackpot was ripe that night. What a day in the EGD section!

The total amount in Jackpots awarded since the EGD section opened is now over $4,900,000. The next one could be yours! And while you spin your favourite machine, even if the Jackpot doesn’t come right away, you will still be earning Rewards Points and entries into the Bust the Bank weekly draws. Add to that the free drinks and unparalleled customer service, and Playground quickly becomes the only choice for your gaming activities!