The Playground 500 was the marquee event of the November Power Weekend. Guaranteed at $100,000, it was sure to put together a great payout table. 166 entries were accounted for over one online Day 1 on partypoker and three live flights at Playground, meaning that players even enjoyed a nice overlay on the prize pool. Nothing like an equity bonus!

The online Day 1 brought 19 players together and from that number, only 3 remained, including our champion Samuel Roussy-Majeau, the only player to have re-entered the flight. After all 3 live flights were concluded, a total of 43 players had stacks waiting for them on today’s Day 2. The action went underway at 3:00pm this afternoon and 10 levels of 45 minutes were scheduled, but only 3 players remained after these 10 levels and they understandably agreed to play it out, giving themselves a nice Sunday off to enjoy their large payout.

Roussy-Majeau started Day 2 with the most chips and was an aggressive force all day, making good use of his ever-increasing stack. On the final table, he orchestrated the majority of eliminations, including the last four! After sending David St-Louis and Thibaut Nouveau to the rail, he had six times more chips than his two rivals, and with his experience and set of skills, it was only a matter of time before he could put an end to the event. As it turned out, all he needed to so was one great hand.

Miguel Cholette was on the button when the last hand started and with 150K in blinds to grab, he decided to move all-in with 800K. Stéphane Lacasse had a little bit less than twice as much and announced the call from the small blind. Roussy-Majeau quickly announced all-in. Lacasse was visibly unhappy about it, but had no other mathematically sensible choice than to complete, but soon realized he was far, far behind his table mates. Cholette had shoved with kings and Roussy-Majeau, massive chip leader, had been dealt aces! Lacasse, having more chips than Cholette in the last pot, was granted 2nd place finish. Full hand in picture below. 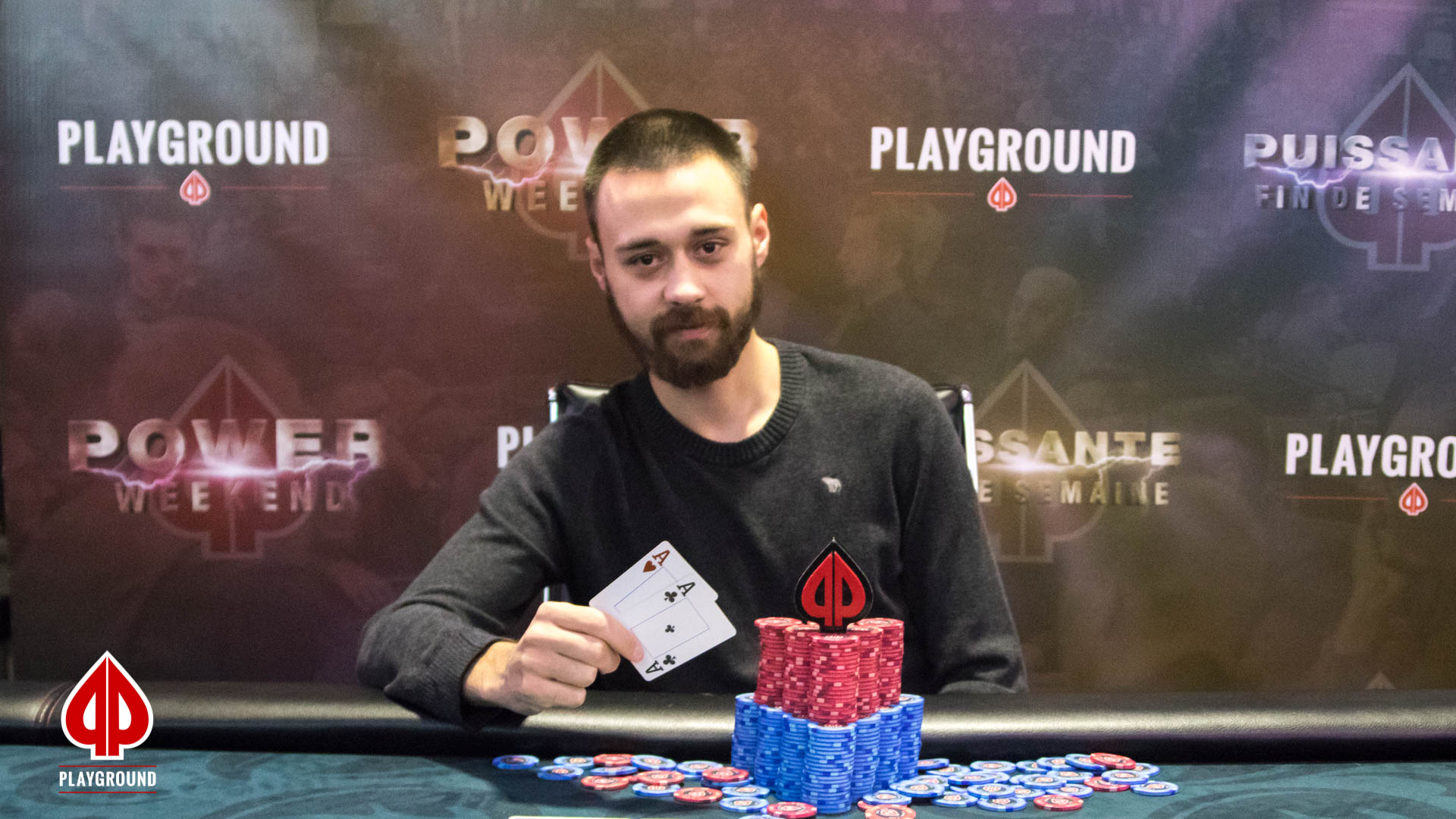 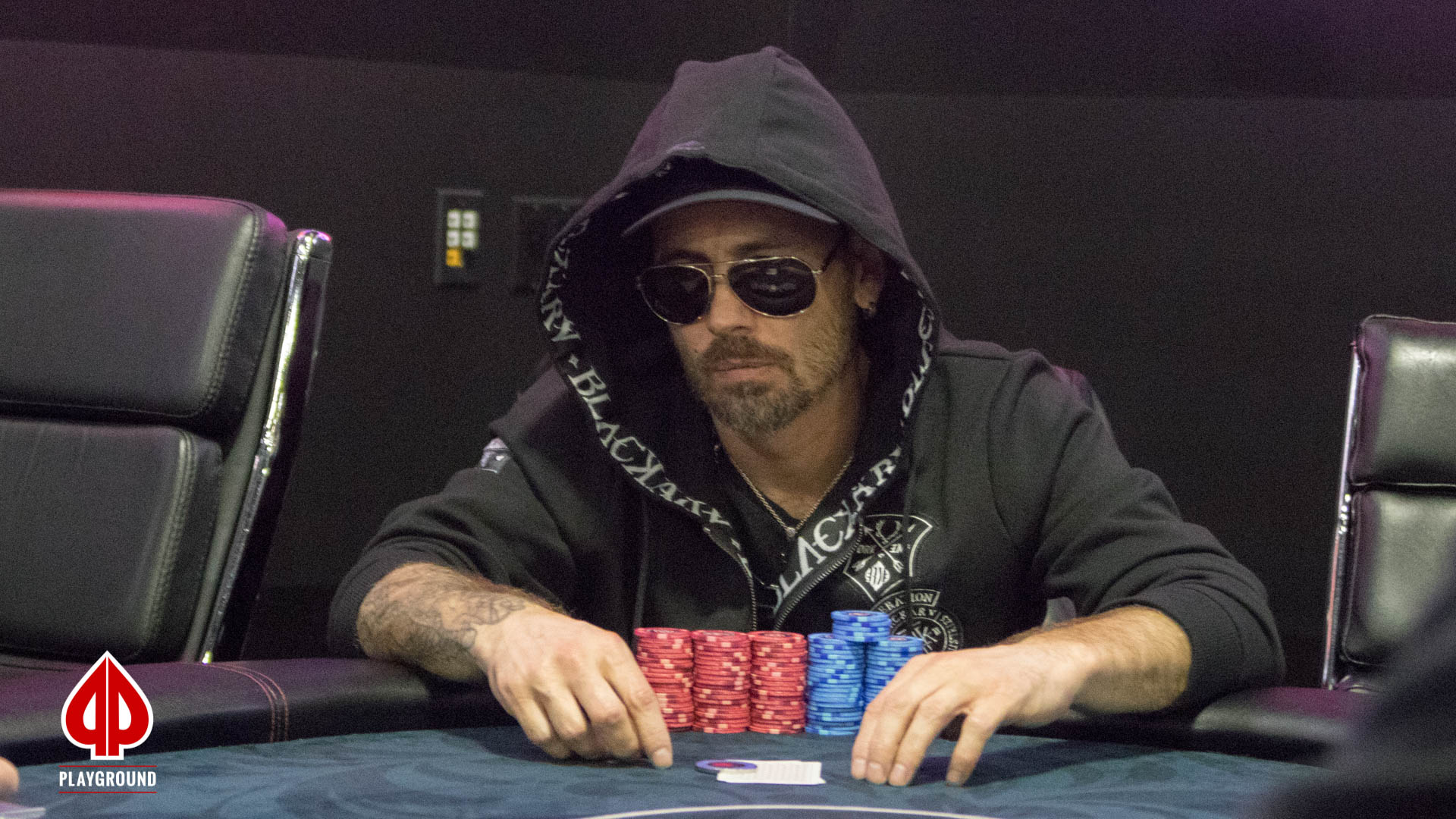 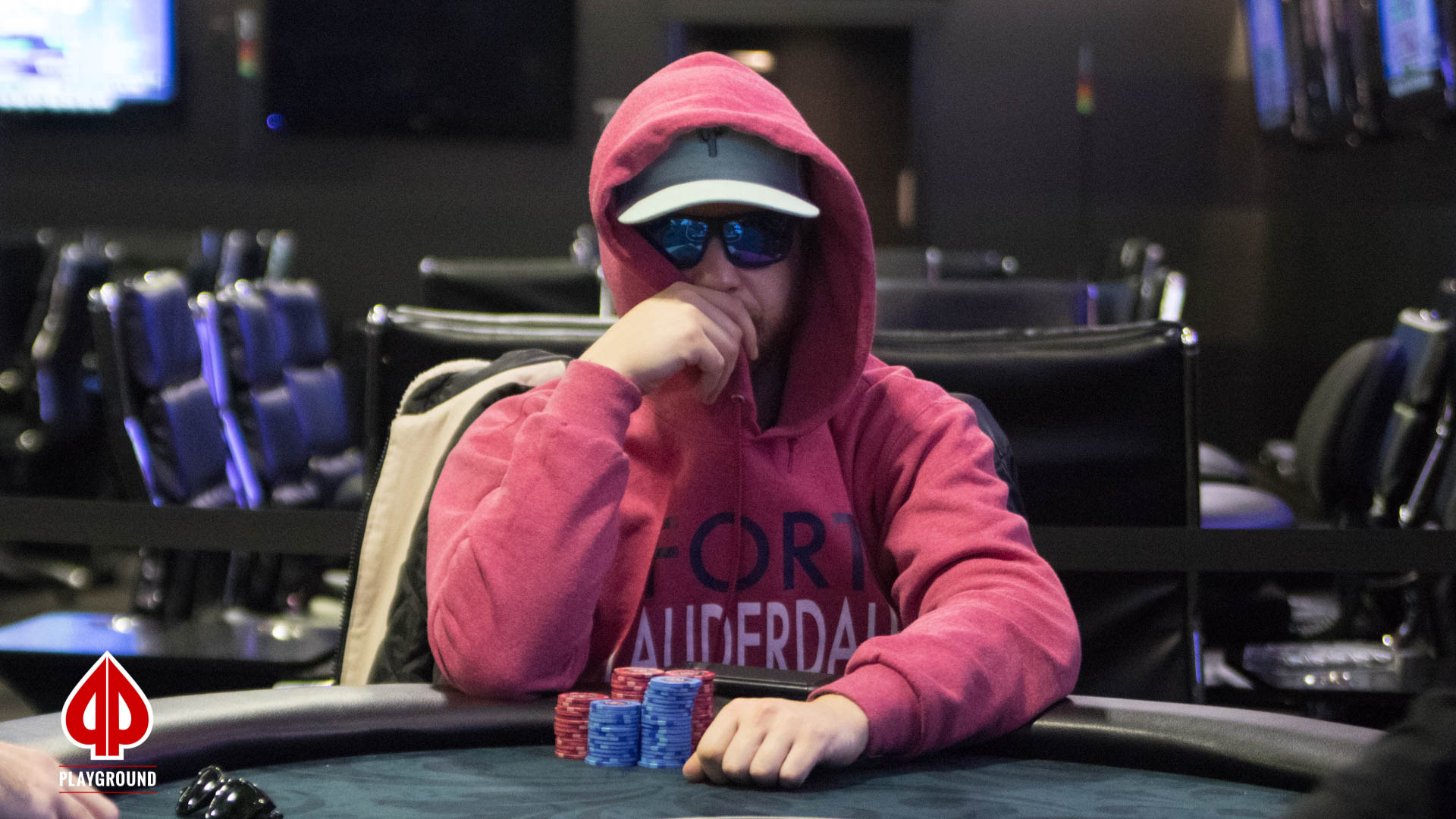 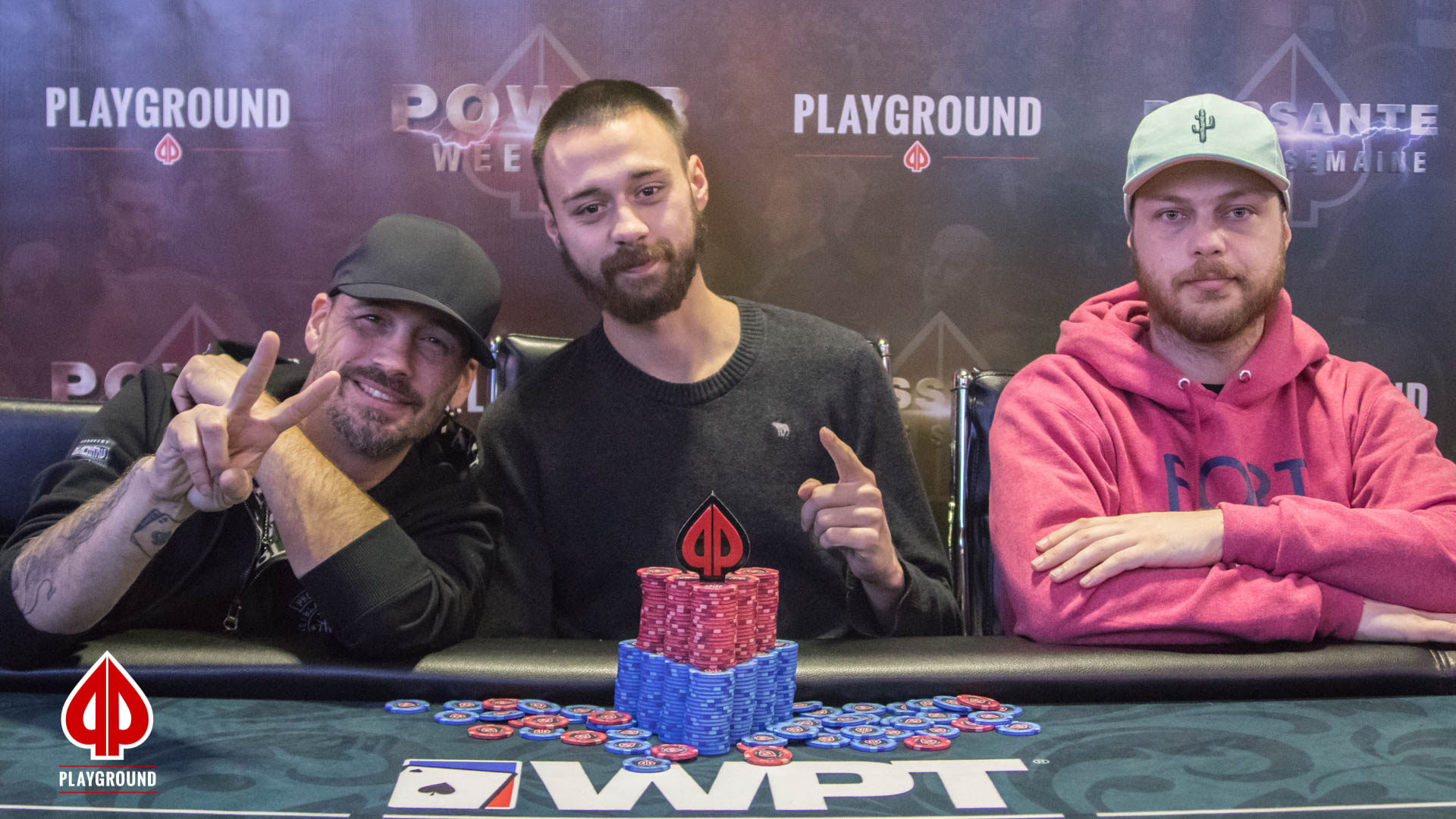 Samuel Roussy-Majeau keeps putting the pressure and two players just met their ends trying to resist. Davis St-Louis was down to about 700K when he decided it was time to roll the dice.

The board did not bring any help and St-Louis was forced to leave. He takes $6,890 for his 5th place finish. A few hands later, Thibaut Nouveau suffered the same fate.

Again, the better kicker was undisturbed, and then there were three. Nouveau got himself a $9,230 payout. Not bad for two days’ work! Majeau now has over 6 million chips to Lacasse’s 1 million and Cholette just over 500K. Congratulations to our latest finishers for an amazing run!

Five players took a break. We missed Matthew Wade’s elimination, but overheard that he was the victim of a savage river. His nice 2-day run netted him $5,150, a job well done! The remaining 5 players will keep butting heads for another two levels. Here are the counts:

About one orbit after the formation of the final table, David Bonneau was eliminated in 8th position. Richard Sysko, who started the final with over a million chips, followed in 7th. He could not get anything going and lost a lot of chips to various players until he got involved in a heads-up pot against Samuel Roussy-Majeau.

Sysko opened to 75K from the under-the-gun position and got 3-bet to 215K. He called, and then check called the flop for 150K. When he checked again on the turn, Majeau put him all-in. Majeau being very aggressive, Sysko had expected that line and called right away.

Sysko asked for a clean river, but the dealer could not comply. The

fell, bringing Sysko with it. He took $3,840 for his efforts. As for Bonneau, he takes $2,870 for his final table appearance. Congratulations to both!

Three very quick eliminations after the break led to the formation of an 8-handed final table, with a little under 3 hours of play scheduled for Day 2.

Here is the seating chart:

With 11 players left in the field, the Playground 500 is now playing on two short tables. Richard Sysko and David St-Louis  just passed the 1-million-chip mark. St-Louis got paid on all streets by an incredulous Xin Qi after his two pairs boated up on the river. St-Louis doubled up nicely and is now in a good position to take a big share of the prize pool. Samuel Roussy-Majeau keeps on rocking and is just a few chips shot of 2 million! He is very active on the table and his competitors, well aware of his relentlessness, prefer to give him a few chips than to risk being put on a life decision.

The final table is near!

Xin Qi, chip leader after 3 levels, had slipped a few times, but he found a way to get back to over 7 figures. Samuel Roussy-Majeau, massive chip leader right now despite having bled a few hundred thousand, open raised a pot to 35K and was 3-bet by David Bonneau to 135K. Xin Qi, sitting in the blinds, went all-in with 508K.

Majeau quickly got out of the way and Bonneau, after asking for a count, completed the bet.

The race was on, but Qi took an almost insurmountable lead after just 3 cards.

Bonneau still has chips, but is hanging by a thread, while Qi now enjoys a million-plus stack of chips. The final table will be formed at 9 players, just 2 eliminations from now.

On a separate note, Van Nghiem Nguy did not manage to keep climbing the leaderboard and is now out. Here are more photos of the remaining field:

After a hurdle, Van Nghiem Nguy was down to just 36K with blinds at 6K/12K/a12K and on the big blind, to make matters worse. He was in with

and two players looking to bust him out. The jack made a second pair on the flop and despite some action on the side pot, his jack took the main.

With now 90K, he bought the blinds from the button and went on to double up against David St-Louis.

Nguy now has about 250K, just under half the average.

Moments after the Playground 500 burst the money bubble, 19 players took their first break of the day. The last level, and particularly the last 10 minutes of play, saw a lot of chip movement, creating two millionaires in the process: Xin Qi and Samuel Roussy-Majeau. You will find the full counts below their pictures.

The money bubble lasted for quite some time. A few players put themselves at risk and survived, although they were either ahead or in a coin flip at worse.

After about 15 hands, Arnold Yaxley found himself in a showdown against David St-Louis. St-Louis’ jacks held up nicely against Yaxley’s big slick. With a few minutes to go before the first break, the Playground 500 is in the money. Congratulations!

Here are some table 28 runners:

After just about 90 minutes of play, the Playground 500 Day 2 field is reduced to 3 tables of 24 players. The tournament staff just conducted a full seating redraw, just 3 eliminations from the money. Bubble straight ahead!

Here is the new seating chart:

Day 2 is entering level 16, second of 10 to be played today. A few players already tripped and walked away, leaving 33 at the tables. As a reminder, 21 players are getting paid in Event 2, with the min cash at a cool $1,070. You can see the complete list of payouts by clicking here.

Here are some photos taken during level 15: