Event #5 was the last day tournament in the February Power Weekend. The prize pool guarantee was $5,000, but the 109 entries that took place allowed to double that figure, to everyone’s delight – especially the deep runners!

The 6-Max format, as it does by nature, pushed the action hard on the way to the final table. The pace slowed down a bit at the bubble, which took about 12 hands to burst, but picked up the speed as soon as the money was reached.

Kiril Gelev conjured up a storm as soon as the 7-handed final table was put together. He started it healthy and orchestrated the first few eliminations, but Paul Manoian came back from just over 300K to rival with Gelev’s 7-digit stack and even secure a slightly superior deal at the ICM chop.

The two players went about exchanging blinds for a while, but Manoian eventually increase the pressure and soon enough, he enjoyed a bit of a lead over Gelev. The last hand saw Gelev raise the 60K big blind to 155K from the button. Manoian pondered a few seconds, then announced all-in. Gelev went to the tank, trying to get a tell, but Manoian wasn’t giving anything and a call ensued. Manoian had kings! The board came out clean and the kings held, awarding Paul Manoian a Power Weekend ring. Congratulations! 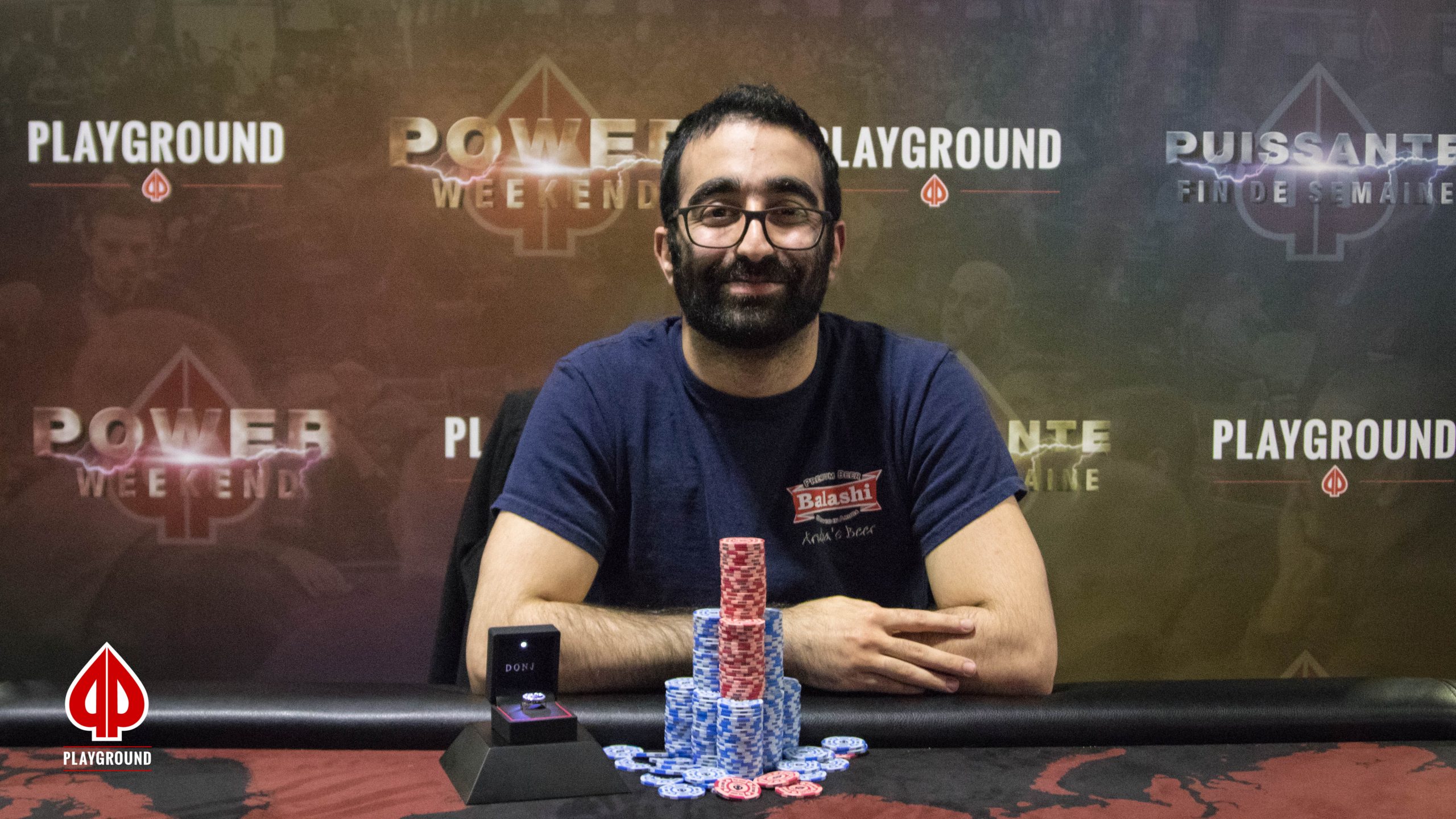 Paul Manoian did a good job in busting the last few players and was able to start the heads-up match with Kiril Gelev on a leveled playing field as a result. Both players agreed to look at the ICM numbers and both agreed to the figures presented by the tournament staff.

The winner will add $225 to their secured payout, on top of the February Power Weekend ring. Let the heads-up match begin!

When Kiril Gelev folded his button, Surette looked down on an ace. Being third in chips, the ace was good enough to roll the dice with, even without help from the second card. Manoian called.

In a hand that we missed, Audrey Verlomme was taken out in 5th place. A few orbits later, Paul Manoian went all-in and found a call from Joshua Caballero-Kowarsk.

Paul is now a clear second in Kiril Gelev’s land.

Congratulations on a nice payday!

Kiril Gelev is having a ball on this final table. He has about as much as his 4 opponents combined! Here are the full counts at the break:

Réjean Grenier had quite a ride on the final table of the 6-Max Re-entry. He showed up with over 400K, strong from a recent win, but lost the majority of them to Kiril Gelev and was down to his last few big blinds. He tripled those and was on the verge to double again, but the river completed his opponent’s gutshot straight draw, and that was it for him.

Raphael Tran Dinh lost a good chunk of chips when he doubled Audrey Verlomme, and lost the rest – just over 100K – on a big showdown against Josua Caballero-Kowarsk.

The board came with no consequence. Raphael, short of finding a ten somewhere, was eliminated in 7th, good for $480.

Jason Trottier just ran out of chips in a dramatic showdown.

Kiril Gelev was already doing extremely well for himself and was way ahead here… until the turn. But that was just a tease for Trottier!

What a rollercoaster. A seven-player final table is now being put together. Good luck to our finalists!

After Steven Taylor busted in 10th, it was Michael Cohen who fell in combat. He lost most of his chips when trying to buy the blinds from the button with

. Jason Trottier was waiting in the big blind with the very respectable

Cohen was taken out a few hands later when his deuces couldn’t find a set when facing a pair of sevens.

There are 10 players left in Event #5. From now on, every elimination will mean a pay jump for the survivors. Here are the prizes collected so far:

Daniel Guillemette was quite short and was dealt a hand that he could not throw away, not matter how many other small stacks there were in the field. Unfortunately for him, Audrey Verlomme picked up even better!

The flop came 2 clubs, giving Guillemette a decent dose of hope, but the dealer did not complete the hand, sending him out in 15th, on the bubble.

Play will now speed up and we should see a flock of eliminations before the action slows down again on the eve of the big prizes.